The Koshu grape variety is indigenous of Japan. It is lightly pinkish as a Pinot Gris, has thick skin so it can be quite tanninc, light aroma so it shows on palate a delicate and subtle character. The wine made from Koshu can get pinkish hues if it is macerated with it’s skins for longer. As it was case in the Lumiere Koshu 2011 vintage, with a delicate peachy character. The tannins from the skins were not flashy since the acidity of the grape reduced the astringent tannic mouth-feel.
The wines made from Koshu are naturally lower in alcohol – 11-12% is typical.

varies from a winery to winery, yet stainless steel for fermentation and ageing is the most popular in order to preserve the fresh nature of these wines. There are exceptions however. I’ve tasted a highly- promising barrel aged Koshu with Battard- like butterscotch flavour enhanced by malolactic fermentation. The complexity wasn’t close to the prominent Burgundies, yet the Koshu’s high acidity and mineral character from it’s volcanic soil resonated well with the oak and buttery touch from the malolactic fermentation. The oak must be kept in balance as the wine can be easily overpower by it. Koshu is not an aromatic grape so it absorbs oak a lot.
Unlike in the EU, most of wines are chaptalised (against the EU law). 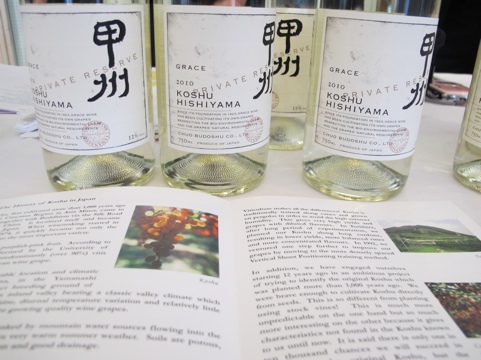 The vineyards growing the Koshu grape are located West of Tokyo in Yamanashi prefecture, often considered to be Japan’s “kingdom of fruits” as grapes, peaches, plums, cherries and strawberries grow here in abundance. It is the natural beauty bestowed with water- rich reservoirs, lakes and perhaps the proximity to the highest mountain in Japan Mt. Fuji, that makes Yamanashi so appealing to many agriculturists including the grape growers.
Many of the wineries offer stunning views of this legendary Japanese mountain, with the producers proud of their special location. Mount Fuji is traditionally regarded by the Japanese to be sacred.
Yamanashi prefecture with its town Katsunuma is the home of Koshu. The soil is largely volcanic, with some clay and gravel at some spots and it is extremely fertile. For quality wines high yelds have to be controlled, so the serious producers have lots of work to put into their vineyards, the fact that perhaps is one of the main reasons for selling their wine for a surprisingly high price.
An umbrella system of attached waxed paper around the fruit to protect it from the rain is unique to this area. A pergola crop management protects the grapes from the harm of the rot. Manual harvest is therefore necessary and it is very labour intense. One of the factors adding to the higher cost of Koshu.
Geographically, at 35 latitude North the vineyards are in the similar spot as California and South of Spain. The weather is rather extreme as it can be icy cold in the winter and very rainy during the monsoon season in summer. The wet climate and resulting high humidity is an anchor of rot and as in France it can be a big problem. Although, in Japan the rot is more harmful as the rain falls mainly during the growing summer season. Moreover, the rainfall varies annually – one year in a certain month it can be 230 mm and another three and more times less – therefore the winemakers could not rely on having the same crop on every vintage. That is in contrast with the New world wineries such as in Chile and Argentina where the weather is more stable and predictable.
The vineyards are owned by mostly independent growers (today some 80.000), which gave rise to co- operatives. With the vineyards tending to be very small (about 2 hectars is quite common), like in Burgundy producing wine in co-operatives is highly sensible. Many families are well- established in the wine industry. Winemaking started there in the late 19.th century. Although Koshu has been known in Japan for over 1000 years, wine started to be made from it about 130 years ago. 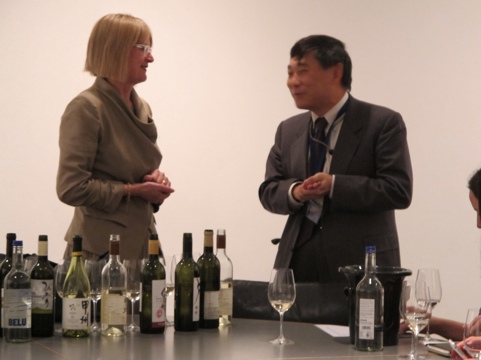 As Jancis Robinson, MW, OBE, pointed out at a recent tasting in London, “Its origins are mysterious. There seems to be a non- vinifera relationship. Genetic make- up is unclear.”
Jancis also said: “Koshu is a very narrow spectrum of wines, it’s rather subtle, it absolutely doesn’t jump out of the glass. It goes tremendously well with Japanese food.”
Book about it co-written by her is coming out in October 2012.
The Wines: more introvert in style, need age to develop, quite similar to a Swiss Challais, in particular with its finesse. The nose reminds me often a sort of ricy, slightly fermented character. It boosts with a marked acidity.
Vintages
Compared to 2010&2011, the 2009 was a very good vintage.
2011 was a very complicated one: two taiphoons brought strong rain, mildew hit the area at the end of a 2010 season.
Overall, Koshu surprised me. It is a promising yet lesser known varietal, which over time may gain more attention from serious wine connoisseurs.