Set in the midst of sprawling vineyards stood a clean-shaped structure blending almost seamlessly into its by-nature-blessed environment. As we drove closer, turning back we marvelled at a glistening water reservoir each fantasising what creature the hill above it reminds us of. My guess was a crawling elephant. What is yours? 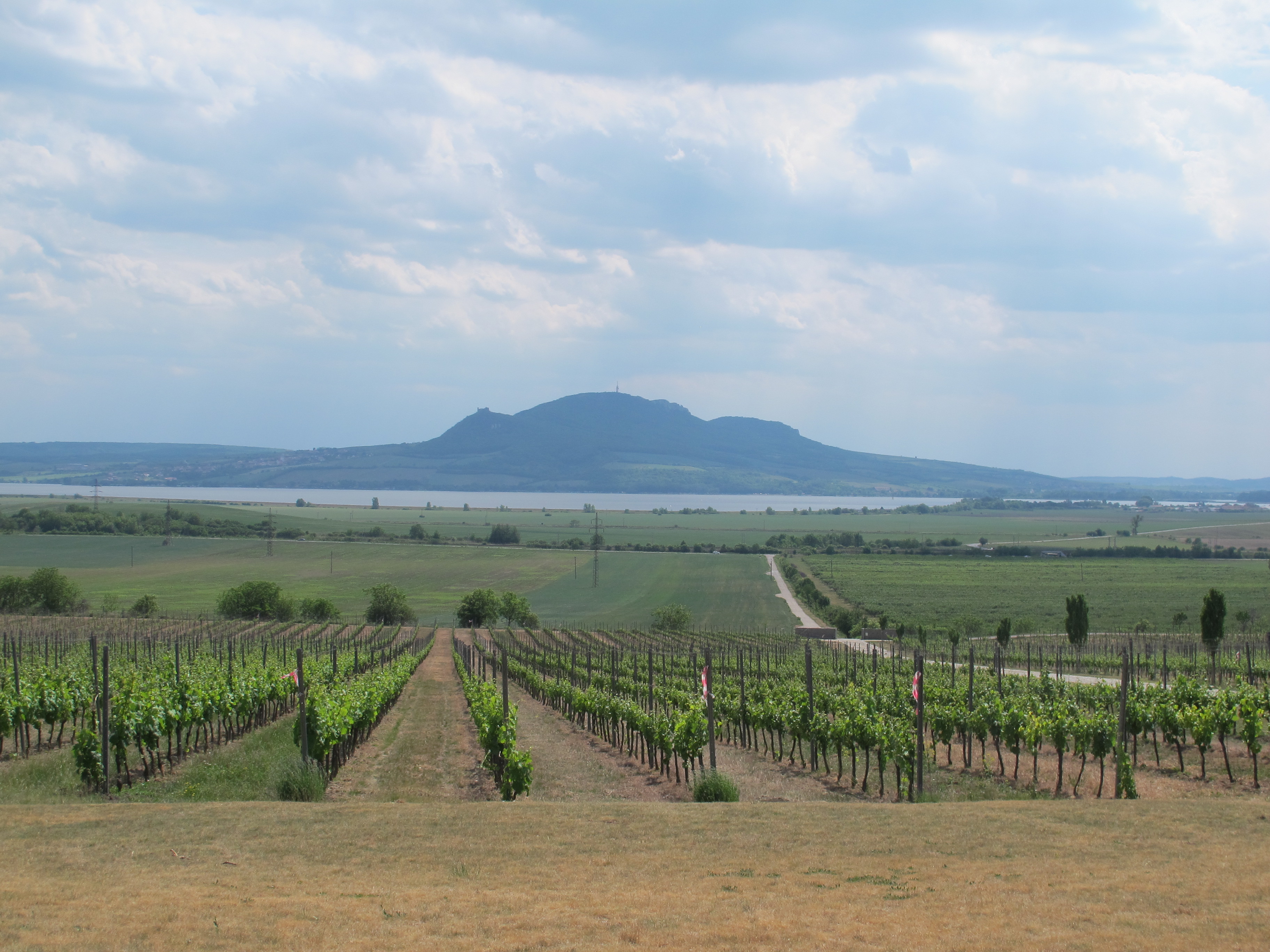 I was taken by surprise when I saw the state-of-the-art winery Sonberk in the Morava region in my native Czech Republic. I could had been standing in Chile or Spain looking at a high-tech construction of a winery, made of glass supported by wood, but I was totally off the vinous radar. I was in the heart of Europe, in a post-communist, yet to this day totally revived country catching up rapidly in terms of winemaking with its neighbours – Austria and Germany.
What a shame that most of the wineries there do not have their web sites in English so the majority of the non-Czech-speaking wine population in the world cannot learn about their activities and wines produced. 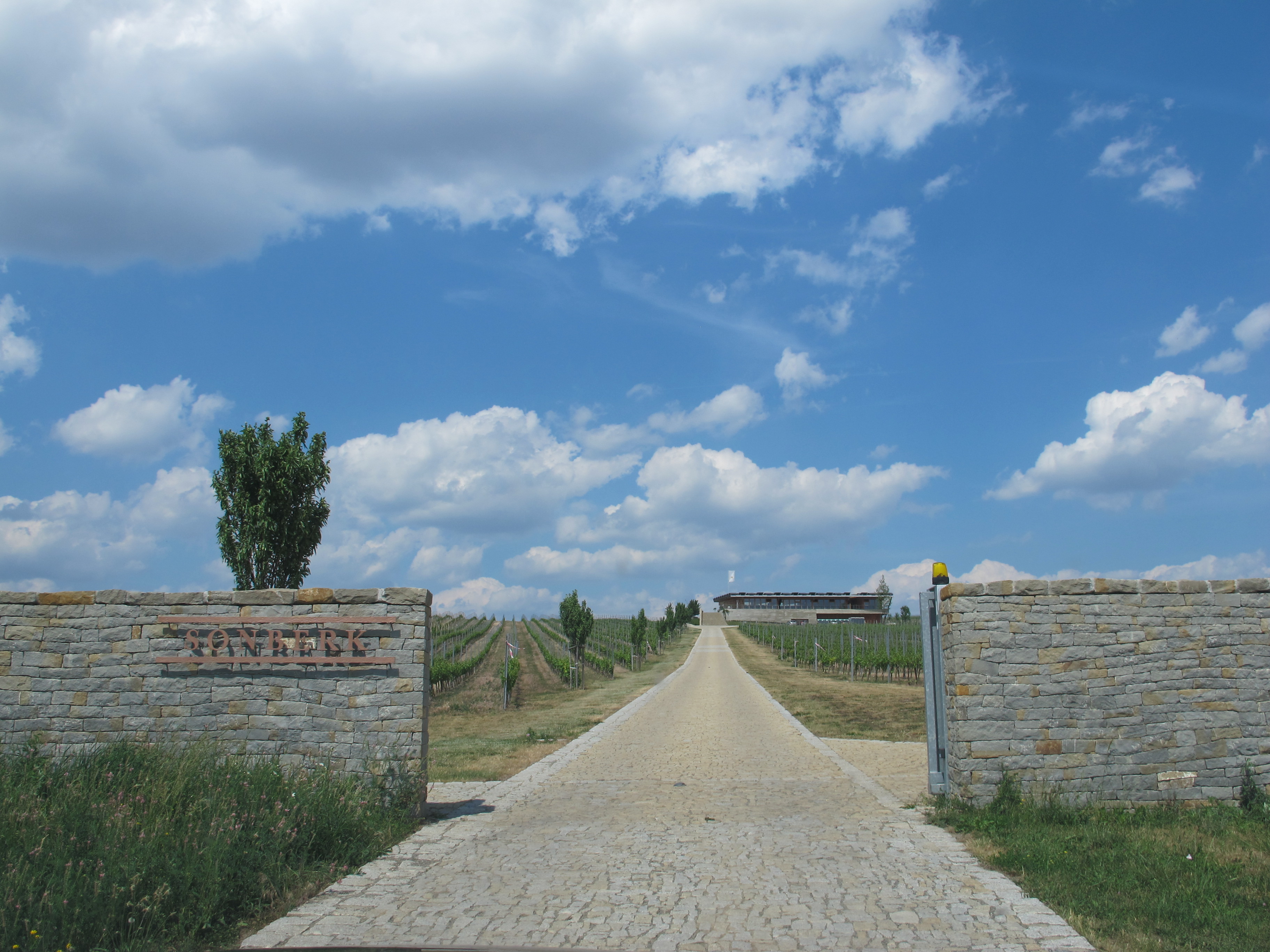 The quality of the wines made in the Czech Republic has been growing at the speed of the Chinese economy over the past 10 years. I remember vividly tasting a bitter, tannic and unbalanced Frankovka (Cabernet Franc), so popular in those days, before I left my country to travel the world (in 2002). I was not a wine drinker then. No wonder, if one drinks such “patok” (drink of a doubtful quality) as we say in the Czech language, then the only form of wine I enjoyed was the fruit boosted sangria or a wine spritz (wine with sparkling water).
Gone are those days, I can happily say now. As my sommelier sister, who introduced me to some exquisite wines from Morava in the past couple of years, would say: “Five, ten years ago, it were only the whites, which were enjoyable, but recently the reds such as Pinot Noir and Cabernet Sauvignon have proven their high potential in the Czech Republic.” And, I believe her. Not though because I got drunk with her during our cheerful family outings and was thus influenced emotionally. The reason for my conversion to Czech and particularly Moravian wines has been both seeing their recent success at international competitions and tasting the 100 winners from selected Czech and Moravian wines at ‘Salon vín’ in Valtice. These experiences recently assured me that the wine production in my native country is taking the right direction. 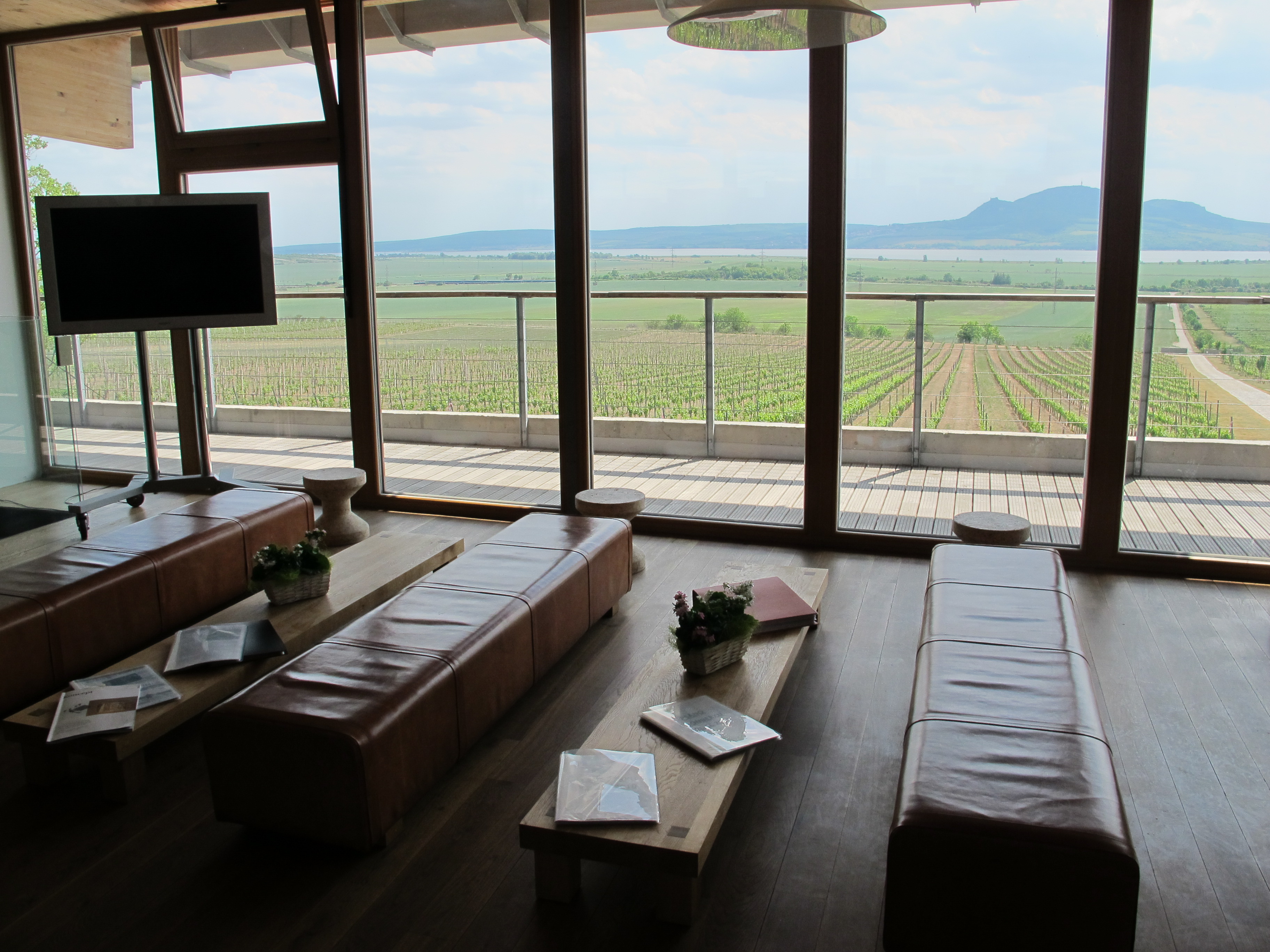 Moreover, there are some producers who are already firmly footed in top quality winemaking. Some are using traditional methods and others the best available high technology.
The later – modern approach – has adopted the Sonberk winery near the village of Popice. 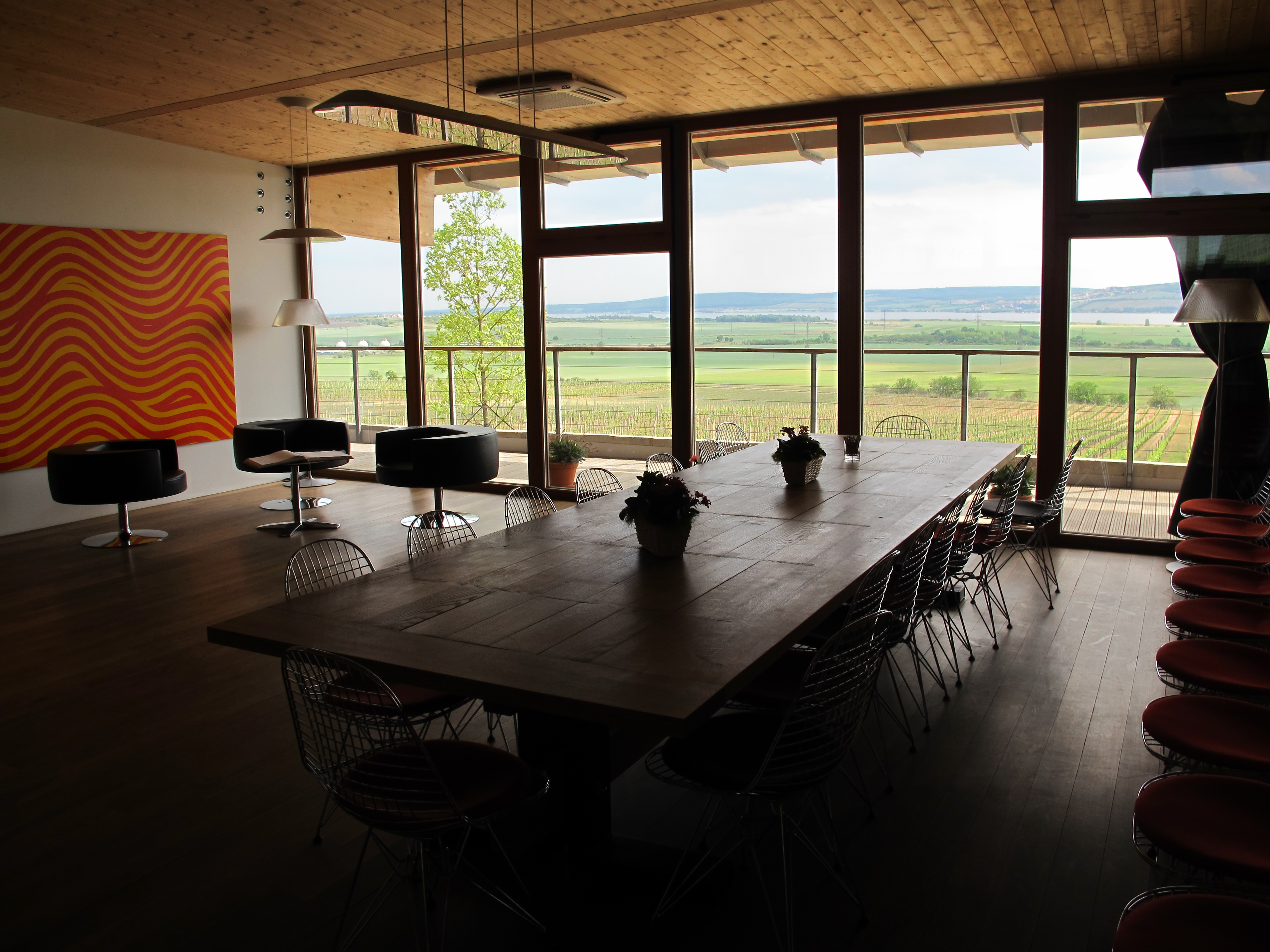 The Sonberk winery and location

The soil of the majority of the vineyards is loess, the loosely fine soil originally deposited by the wind¤. A long time ago there used to be a sea so some minerality is still present deep in the ground. The climate and latitude are similar to Burgundy as many local producers proudly claim. The winters are cold, spring frosts are challenging and summer with early autumn are warm. South exposition of the 40 ha of vineyards is important for achieving the right ripeness of grapes. Hand harvesting in a number of rounds is important for selections of the right and ripe enough grapes.
Sonberk is not a new venture. There are historical documents proving that vines were grown here already in the XIII. century! Over time, its wines reached such popularity that they were served for the Czech kings. As history is not always favorable and the country was occupied first by Germany and later by Russia, the vineyards deteriorated and wines fell deeply down on the quality scale.
The new winery was finished in 2008 by a distinguished Czech architect Josef Pleskot. Its is a marriage of modernity with tradition. 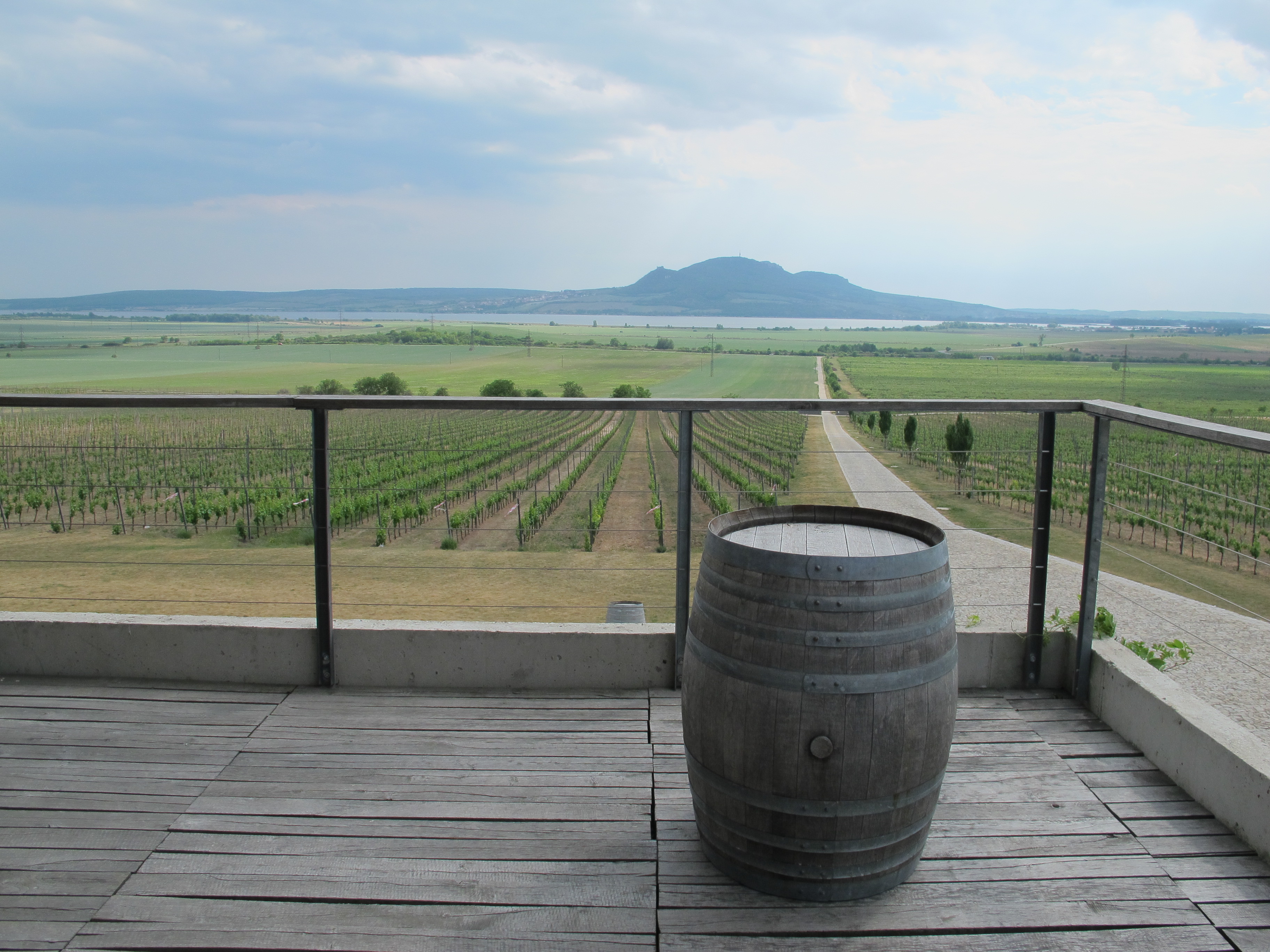 On my recent and surely not last visit I tried six wines. Each of them were very different from the other, and all very interesting with some exceeding my highest expectations I had of this winery.
Starting with the whites, the local cross of Muscat Ottonel and Prachteauben, Muscat Moravia 2011 showed to be a nice and delicate aperitif. Candied fruits with apricot marmelade prevailing, medium acidity and a slight zing of bitter almond, this is a satisfying wine one can drink a bottle of with ease. This is also a starting category of wines from Sonberk.
Moving to the German-like Rhine Riesling Ryzlink Rýnský 2008 was a welcome change for me and my tasting entourage. Petrol on the nose can be found not only in the Alsatian or German dry Rieslings, but also in Sonberk’s wine. Dried fruit and wet stone added further complexity to the already intense aroma. Mineral palate, again with wet stone character, dryness, high acidity and citruses having awaking effect and apricot balanced it all. Long finish underscored the high quality of this fine Riesling also suitable for aging.
Now to something more exotic for this part of the world – Semillon, the white Graves favourite found its call at Sonberk. Whether it was a successful choice, only time shows since the 2010 we have tasted was the first good vintage made here. Aged in barriques for between 3-6 months the wood showed slightly on the palate adding depth, bitter touch and warm vanilla spice to the wine.
The staple of Moravian grapes – Sauvignon Blanc could not be missed in Sonberk’s profile. In the case of 2009 it was aged in barriques so the wine got a bit more depth. Typical gooseberry on the nose and palate was accompanied by apricot, black currant leafs and wood tones from the short barrel ageing.

From the sweeter wines we started with an absolute siren of perfectly balanced wines – Pálava výběr z hroznů 2008.  Pálava is an indigenous grape for Morava. It is a cross of Traminer and Müller Thurgau. Tropical fruits and black currant on the nose are seductive. Palate of this wine is extremely rewarding with lovely acidity balancing off the sugar in this wine. Delicate start with apricots, exotic spices fruits such as ripe mango is concluded by touch of wood from barrel ageing.
Not only Canada and Austria make excellent straw wine (made by grapes being dried on straw mats). In Morava they know the craft of straw wine making very well. At Sonberk they make it from Traminer. Tramín pozdní sběr had 213 g of sugar, but 10% alcohol making the difference (Canadian straw wine usually has around 8%). It was less heavy, yet dense and concentrated. Raisins and dried pears dominate the nose and honeyed palate shows some apricot jam and raisins with soft touch of acidity.
The wines from Sonberk truly rock, a must try for any serious white wine lover.