Thierry Marx, one of France’s most celebrated chefs, has invented an unusual although for a modern and hectic lifestyle suitable concept. The chef created simple dishes in an ethos of ‘45 minutes – 45 euros’ . This means either that you spent only 45 minutes at his restaurant dining (or rather just briskly eating) gourmet food or that time is money in the world of now, so you should not spent hours at a Michelin awarded establishment. I agree with his point of reducing the lengthy restaurant outings as it sometimes may really seem as a waste of time (one could have used the extra hour or two to do something more substantial such as catch up with emails, walk a dog or read the informative daily news). On the other hand, when you have to pay quite a lot of money for meals at these high-dining restaurants, then having a relaxing lunch or dinner without worrying about the next meeting or other duties, should be worth the time. The word stress became the new cancer of the past decade so why not to start reliving it while performing one of our most basic needs – eating. 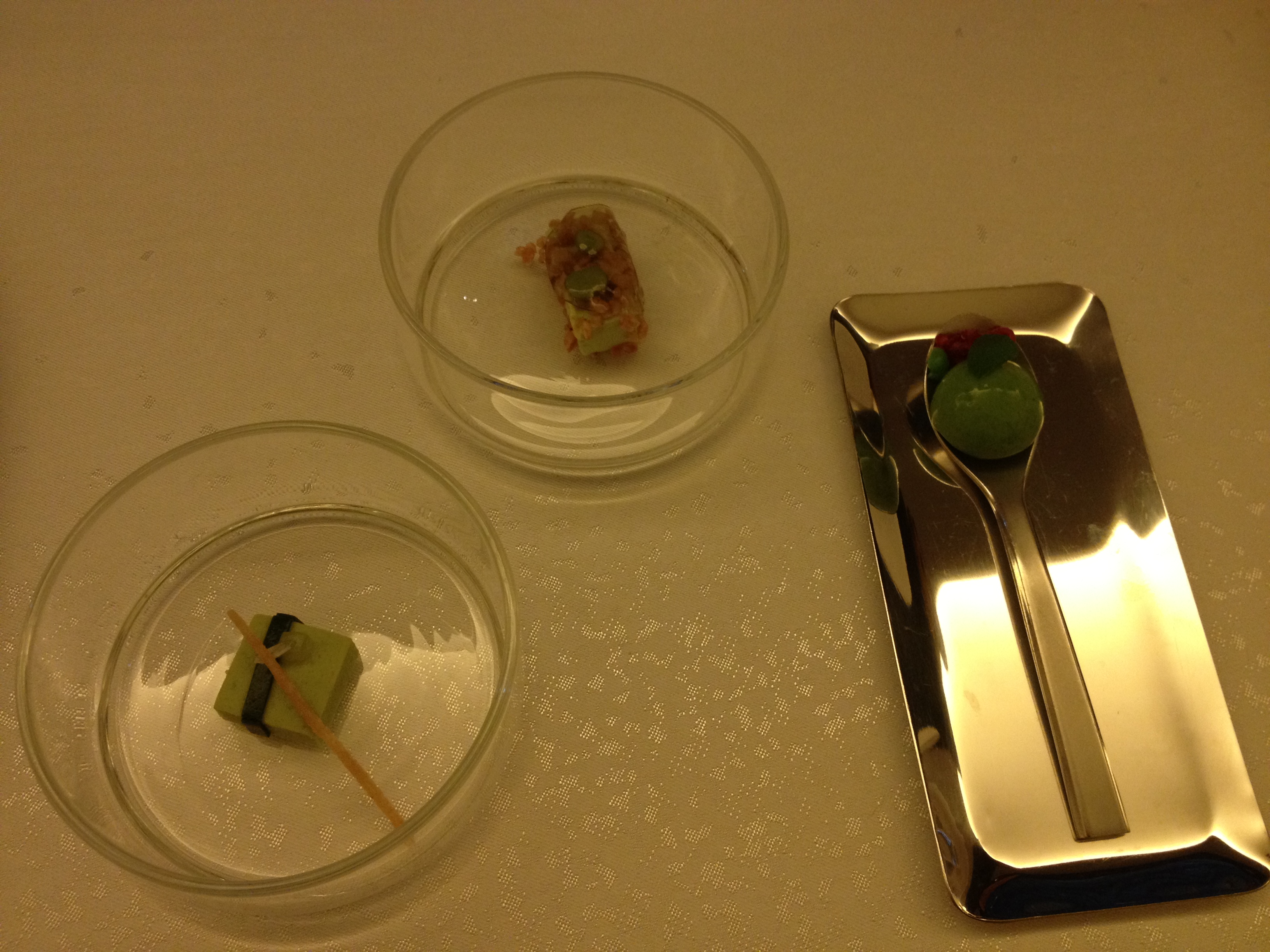 Food: The names on the menu sound sometimes a bit scary and matter-of-fact, thus not tempting you to expect something delicious.
Our first meal was called Structured & deconstructed green peas, so you can judge for yourself how tasty it sounds. Luckily, the dish was amazing and turned out to be my favorite from the six-course menu. Depicted above on the spoon lays a delicate pea bun, something resembling a pea cream financier and a pea truffle. All were savoury, not sweet, these are just my creative musings about the possible descriptions I missed on the menu.
We continued our journey through the concise list of ingredients with Cuttlefish / asparagus with squid ink / spicy oil. The dish looked like a modern painting on the plate, but tasted bland. 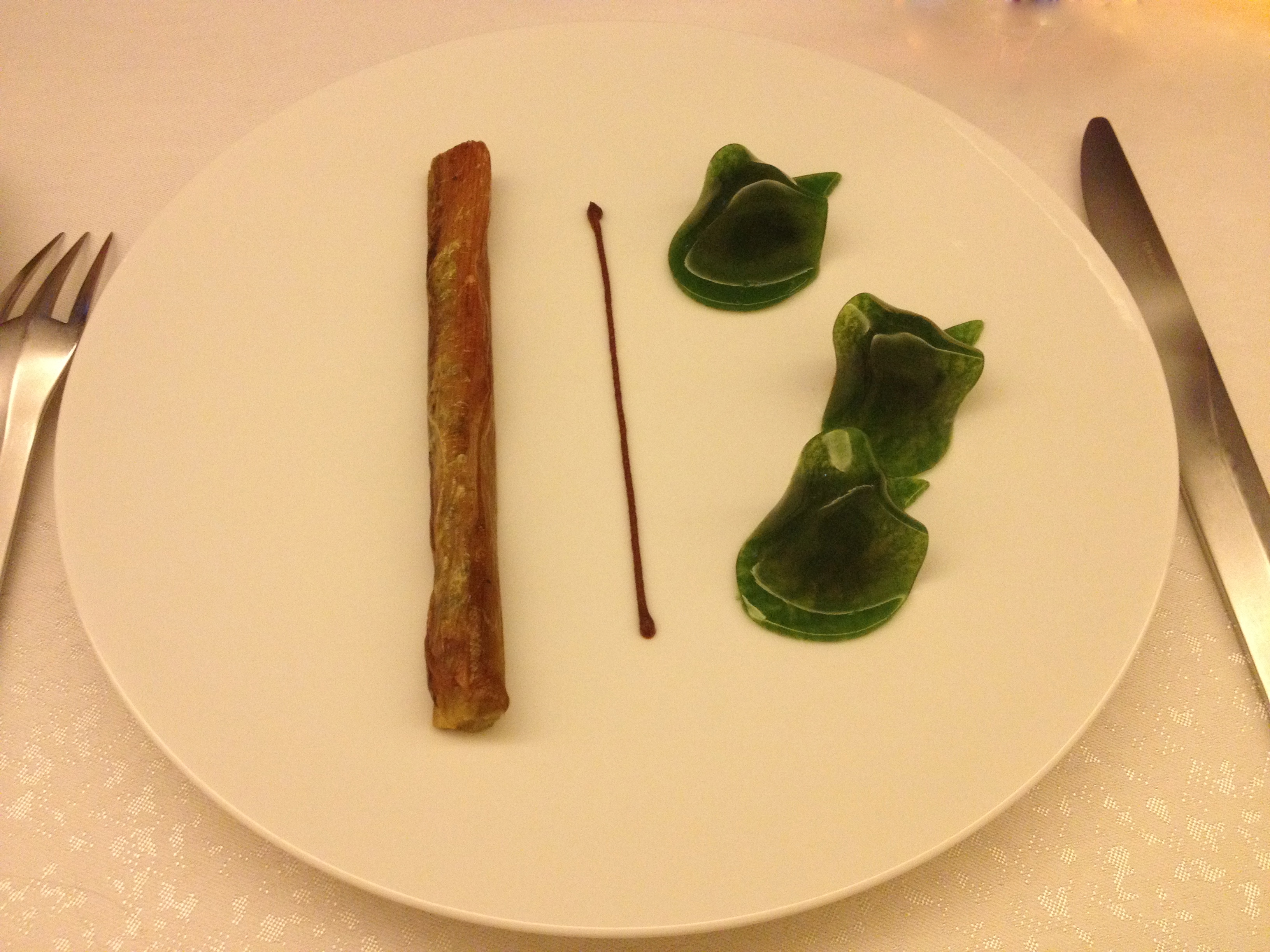 The leeks / snails / fresh herbs look like a rendezvous of Martians’ flying saucers as the snails are enveloped in green jelly-like ravioli. Tušit taste is disappointing though. I found the snails very boring and wish to eat the simple Burgundy snails diving in melted herb butter.
Turbot / popcorn was another quite nice plate. The white fish was thinly sliced like a carpaccio and tasted marvellously. A high quality fish melted on my tongue like a thin layer of ice. The popcorn was a bit dry and boring so I would leave it out and put herbs or something else if the chef wants to be so original.
A tiny Soy and oysters risotto / black truffle was a delightful bowl of soy and oysters covered by a white foam sprinkled by an ash of black truffles. It fulfilled the chef’s quest for originality, yet it did not sacrifice the pleasure from eating it.

Continuing with the line-up of expensive ingredients we were served Lobster / white miso. A great idea to pair Western and Japanese cuisine turned to work magic, just the lobster was far from the succulent and flavour-bursting one from Maine in the US. From the European waters sometimes the Lobsters from Brittany can get close to the Main’s king of lobsters, yet it is mostly left on the chef’s skills to create a delicacy.

Much better produce of the sea was a piece of John Dory. The Pan-fried John Dory / asparagus gnocchi / Parmesan foam satisfied our demanding palates fully. A playful and light dish, which was interesting as well as very tasty.
Looking across the table at the bloody Charred beef / liquorice / green pees / lardo di Colonnata of my partner I had to try some. Again it looked like from a dining magazine cover, yet it was a bit too rare and for someone who ate peas in half of the dishes already it was a bit too much of the same. The liquified is a good idea, yet combined with the other ingredients it was far from a harmonious meal for me. My meat-craving parter liked it a lot though.

Drinks: We asked the sommelier for suggestion of a red elegant Burgundy suitable to our meal selection. He recommended Morrey St. Dennis, 1996 from Hubert Lignier so we went for it. However nice the wine was though, we were very disappointed as it was not the style we asked for – the wine was more rich, concentrated and intense, but we wanted something more elegant. We would have done better without the sommelier’s advice. Moreover, the wine list is not full of bargains either so one has to be very selective to find something enjoyable fir a good price.

Atmosphere: White, plastic and without life. It was the decoration which made us to feel like in a box or inside a spaceship. The tables were comfortable, people we talking in a moderate level, but we could not wait to be somewhere else. At least at some place where one feels some life. Too cold and dull atmosphere for me.