A Soirée Grands Crus (loosely translated: Evening of Great Wines) took place this month at the port of Cap d’Ail, just out of Monaco. The event was an excellent opportunity for the local wine enthusiasts to taste both – some famous as well as lesser known white, red and sweet wines from the Bordeaux area.
All the proprietors were present and explained everything about their wines and vineyards in person. Having all of these busy and successful people at one place is a rarity in today’s global world of wine business. As it is these days, the majority of the bigger prestigious wineries sent their ambassadors to give the tastings to the public as well as to the professionals.

Present were 35 domaines bringing each two vintages of their wines. You could find the acclaimed wines from the Château Pichon Longueville, Carbonnieux, De Pez and Giscours from the left bank as well as Château Gazin and Michel Rolland’s Le Bon Pasteur from Pomerol from the right bank.
For the price of almost €200 it was not the cheapest tasting I have attended, yet it was accessible to the wider public treating us to canapés, view of the Mediterranean sea and life jazz music. At the end, it was a pretty good deal. Not like most of the press and professional tastings in the typical exhibition hall, back room of a restaurant or rarely a sit down guided tasting. The last is still very analytical and uptight rather than enjoyable and relaxing. 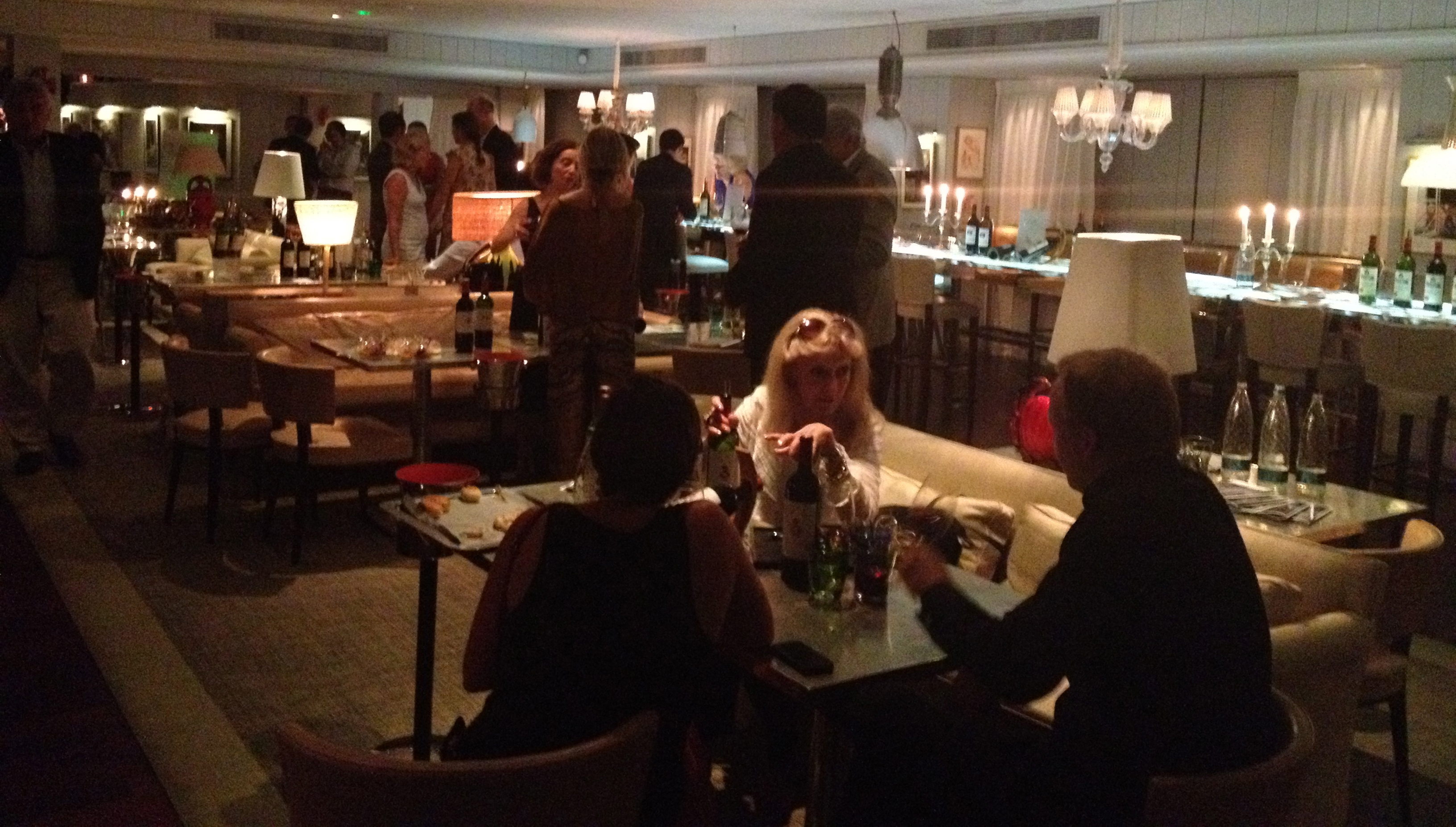 I chose starting upstairs with the white wines in the open-air bar where the breeze of the sea freshens up ones face after a couple of glasses of wine. (Despite I am mostly spitting out the wines during a tasting, I always get a bit pinkish skin tone (simply said a blush) on my cheeks from the alcohol being swirled in my mouth).
The most striking whites were from Château de Chantegrive, Domaine de Chevalier, Château Latour-Martillac.

Château de Chantegrive 2008 – a 50/50 blend of Semillon and Sauvignnon Blanc, the two common grapes used in white bordeaux. This Graves native is a lovely, fruity, yet intense wine, with aromas of apricot and ripe pear. The Semillon is responsible for the intensity. A great summer companion if you desire something more pronounced than a crisp Sauvignon.
Domaine de Chevalier 2008 – dominated by Sauvignon Blanc (85%) and only polished by ripe fruit flavors of Semillon (15%). Using new oak for part of the blend (30%) left some wood tones on the palate, with vanilla and smoke accompanying it. It is a complex wine where ripe yellow fruit is balanced by spices such as white pepper and clove. Pessac-Léognan is well-known for excellent white wines and Domaine de Chevalier is doing a justice to its fame.
Château Latour-Martillac 2008 – another Pessac-Léognan based winery, yet its wines are very different than the Domaine Chevalier’s. Sauvignon Blanc in its 2/3 majority in the blend brings on the herbaceous, fresh and zesty tones. High acidity and long finish ensure long pleasure from this wine.
From the red wines I liked the 2002 vintage from Château Trottevielle, 2006 from Gazin, 2006 from Le Bon Pasteur and 2004 from Château Clerc Milon. Overall, the reds were better than the whites in terms of complexity and that is perhaps why these days the red Bordeaux is much more praised, than the whites. Nevertheless, the white Bordeaux are underrated as once they were more popular than the local reds and they offer lots of pleasure.

Château Trottevielle 2002 – grapes from the Saint-émilion Grand Cru vineyard must speak complexity and be capable of longevity. In the case of this wine they really do. On the palate dark fruits accompanied by spices become alive with high acidity and long tannic finish. It is balanced very well as it starts intensely, is mellow in the mid-palate and ends with tongue-awakening tannins – like an U shape.
Château Gazin 2006 & 2009 – both vintages were showing great, although the 2009 needs some time in the bottle as the tannins were very fresh and mouth squeezing, although not harsh so the wine was drinking well. Both vintages were concentrated with blackcurrant and both high acidity and tannins in the right balance promising long aging potential.
Château Le Bon Pasteur 2006 & 2009 – again both showing very well, but in the case of this child of the legendary wine consultant Michel Rolland even the 2009 was very elegant and balanced. As is common on the right bank, the wine is mostly Merlot with an addition of Cabernet Franc (about 20%). Elegant, well-balanced, smooth and red with dark fruit, in the younger vintage showing more of a ripe strawberry. Madamme Rolland was a lovely lady sharing her travel stories with us eagerly. She loves Argentina and their family property at Clos de Los Siete. A dream came true for her and her famous husband she met during studies when she had a little idea about what oenology (the subject her future husband studied) was.
Château Clerc Milon 2004 – this Pauilac Cabernet blend achieved greatness in 2004. Its masculine character with espresso roast sweetened by cassis and white chocolate,  is refreshened with hint of menthol. A very well balanced wine produced by the Rothschild family.

The end of the evening was more than relaxing with the lounge chairs seducing all the present people at the restaurant’s terrace to sit down. Many of the tasting participants forgot about the spitoons and just comfortable settled in one of the seats and enjoyed a glass of their favorite wine from the tasting. For me it was harder to choose one, I would have to end up at least with three glasses in my hand lounging in the chair, and that would look improper for a lady, so I spit the last delicious sip of red and moved back home.