Luke Mangan is a celebrity chef from Australia, where his first restaurant the Salt in Sydney proved o be such a success that today he operates a number of its branches across Asia. Salt grill was just a natural evolution for his modern take on Australian fare, creating more simple and ingredients focused food.

Atmosphere: Relaxing, breathtaking sky views with a fashionable urban feel. The service can be a bit unprofessional at times, being slow at the start and pointing at the minimum spend for each person, but once you start ordering they turn into sweethearts. The stunning city view calls for a romantic date or music playing into the moods this place evokes. There were some couples, but also friends, families and groups. The music vibrated my ears with relaxing tones, so perfectly matching the atmosphere. Dress smart casual or be as elegant and classy as you wish as the interior, height and luxe location are appropriate for ‘elevated’ fashion pieces.
Bread selection with Luke Mangan olive oil & dukkah (a dry mix of middle-eastern spices). The Australian olive oil selected by Luka Mangan himself was exquisite. Deep, yet refreshing with spicy chilli on mid-palate this was a winner for me. The bread was freshly baked, served warm, yet quite boring white bread.
Another nibbling surprise were the juicy and tasty Australian marinated olives we ordered before any one of the tapas dishes arrived.
The Sashimi of kingfish, ginger, shallot and goats feta was better than at most Japanese restaurants. The talent to combine the right things together unveiled itself in this exquisite dish. Which Japanese chef, after all, would serve goats feta cheese with raw fish? I guess not many, so thanks our gourmand god for sending us this Australian fusion master to put it so well together. 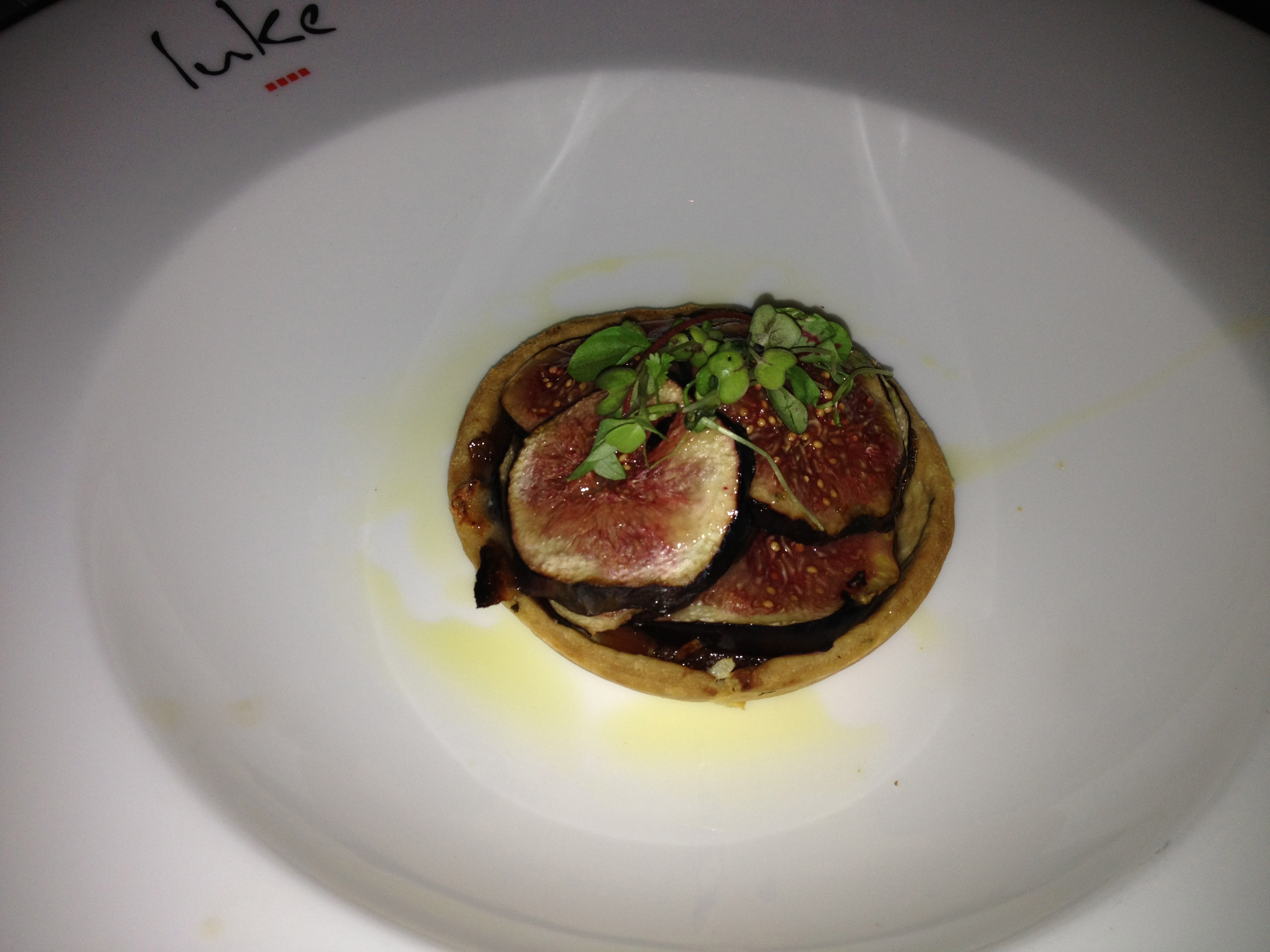 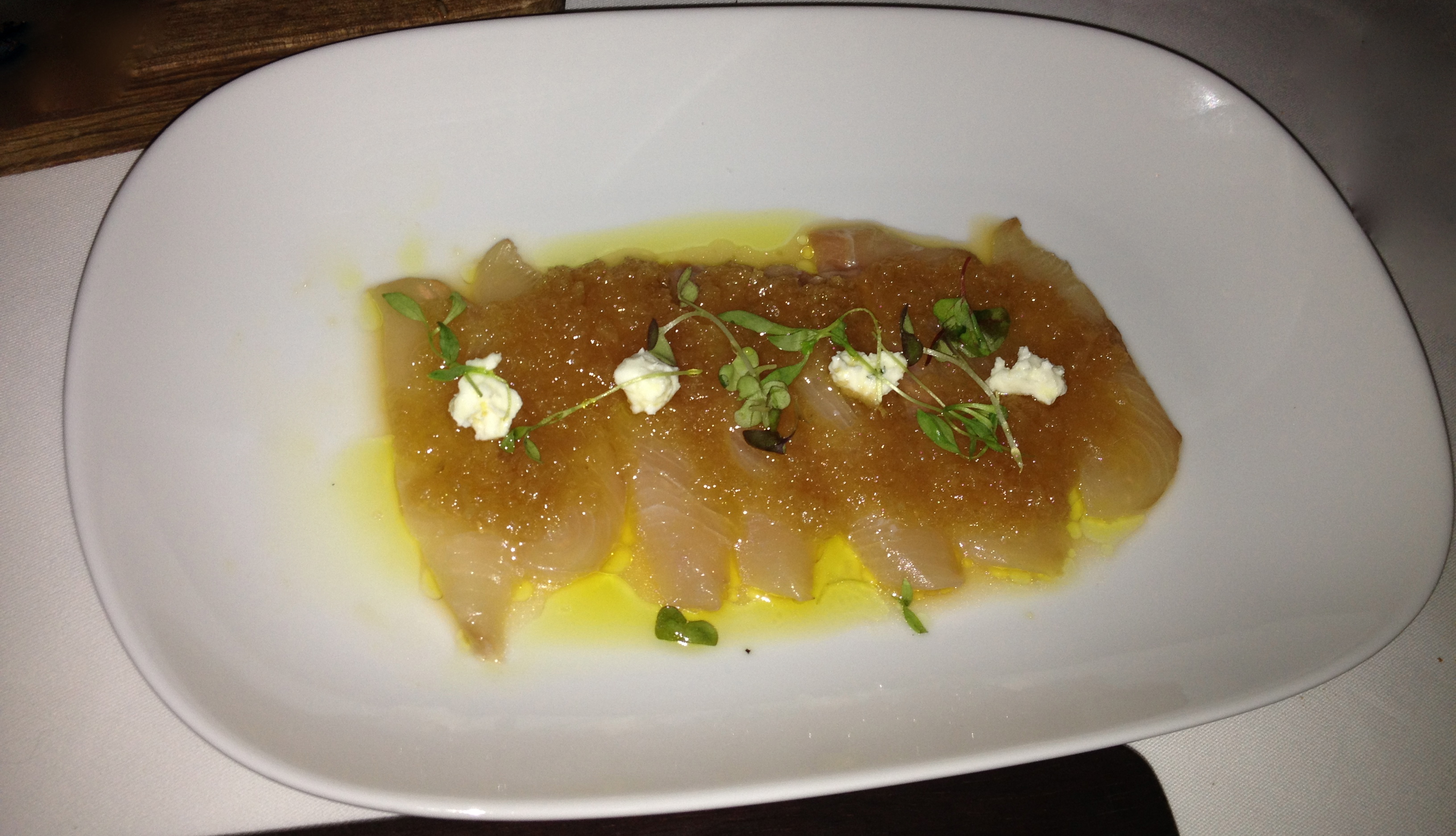 A staple of tapas bars the fried Salt and pepper squid served with char grilled lime and aioli was good, rather average, yet a big plus for me was that it was crunchy and not too oily as it sometimes tends to be.

Another vegetarian delicacy was the ‘Salt’ salad – seasonal baby vegetables, slow poached hen’s egg, buffalo mozzarella, candied walnut. Together with the sashimi and tomato bruschettas this was my favourite dish. The unique blend of vegetables, fresh, marinated and roasted with creamy buffalo mozzarella, slightly sweet candied walnut and crunchy fried lotus rings would impress even the harshest critics of “boring” salads. The salt salad was a perfectly matched symphony of intense flavours. 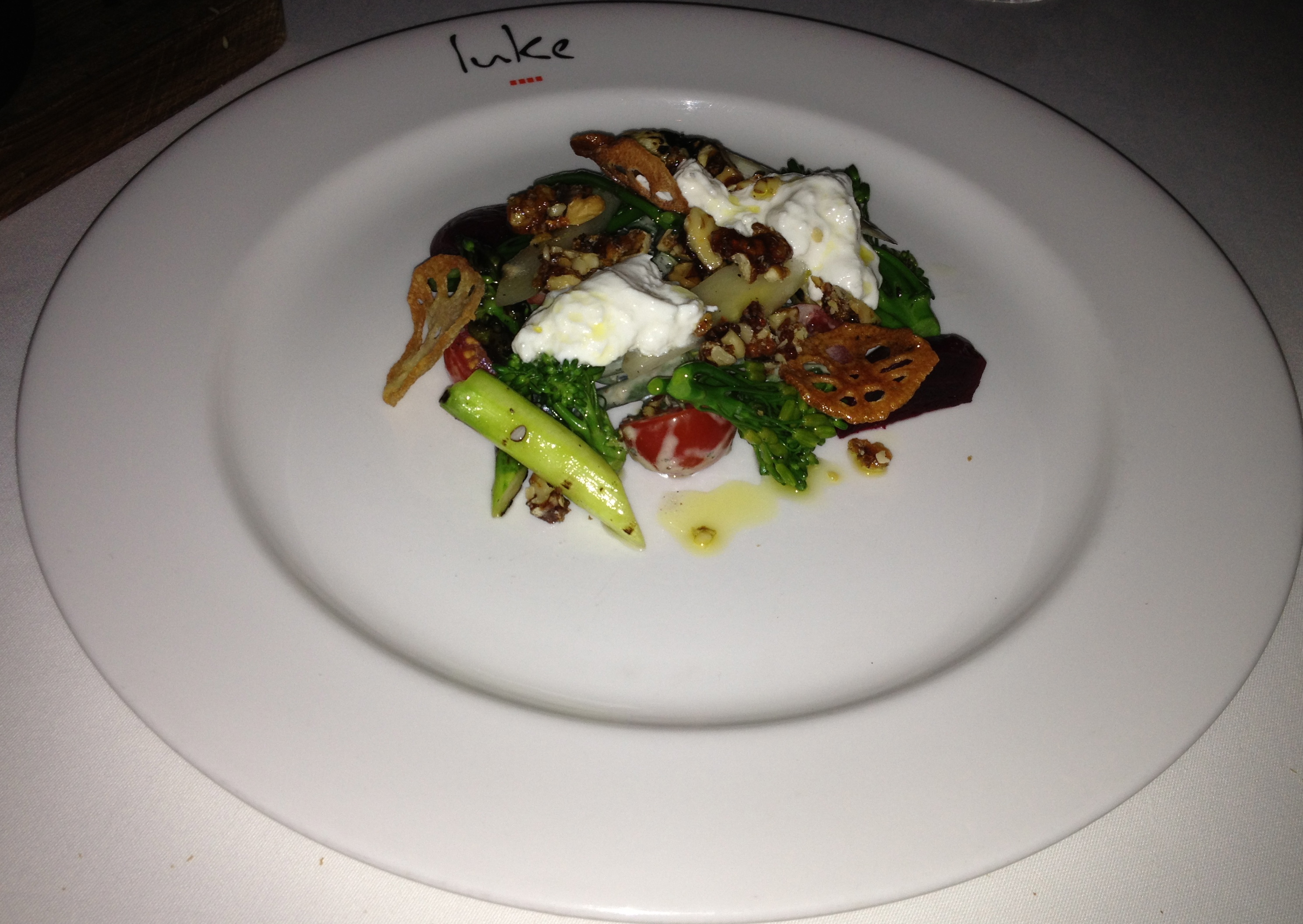 Back to carnivores with Duck sliders, pickled cucumber, chili, coriander. This Asian dish got an intriguing revamp by the chef. The dumpling-like sliders were filled with chunks of duck meat, zesty coriander and pickled gherkins that balanced the richness of the dish together with spicy chili.
We had to order the Roasted cherry tomatoes, Burrata cheese, peppers, grilled bread (2 pieces) twice how great they were! The Italians can learn from Mangan how to freshen up their signature tapa. On a crunchy slice of baguette were served marinated yellow and red peppers layered with creamy Burrata and grilled cherry tomatoes sprinkled with green radish. Sumptuous, interesting and fresh at the same time, this was just a perfect take on sometimes too one-sided Italian bruschetta.
As at any wine bar, there was a Cheese selection served with sliced green guava and lavash crispy bread. There were three types of cheese, sadly none from Australia so we opted for two – Manchego and Tallegio since we are not big fans of blue Roquefort, that was the third choice. Both of the cheeses were of a superb quality and complemented our glass of Cabernet Sauvignon well, although I think that they would tame the fruity cassis character of  the Shiraz. 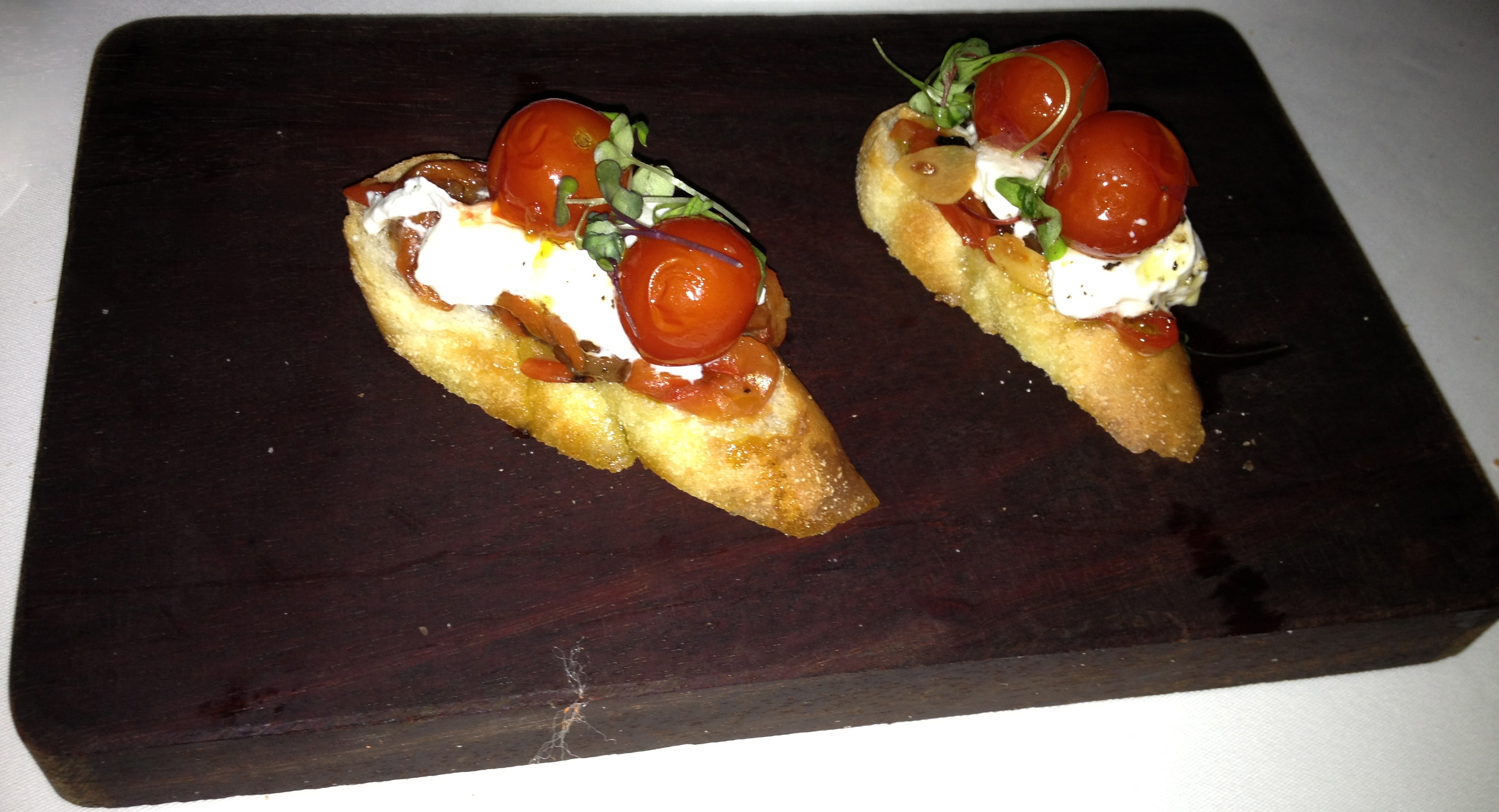 Drinks: The wine-by-the-glass offer is appealing so we went into sampling the Australian and kiwi whites and reds as our tapas-style dishes were arriving.

Starting with a glass of a startling, mineral and terroir-driven Riesling 2008  Grosset Watervale (Watervale SA ) I was taken aback with its lime core, earthy mineral tones from the rocky soil and lingering finish, that made it hard or me to switch to another glass of white wine. Yet my curiosity won over my taste buds and I tried Pinot Gris 2009 from Seresin Estate (Marlborough NZ ). It was clean, sharp and slightly citrusy, but too weak for the intensely flavoured dishes at Salt. Refreshing my palate though before moving to a vanilla pod scented Chardonnay 2009 made for Luke Mangan by TarraWarra (Yarra VIC ). Its depth and burst of aromas headed by vanilla was perfectly suitable for the Sashimi, Roasted cherry tomatoes bruschetta as well as the Salt salad.
RED WINE
Starting light with a Pinot Noir 2010 made for Luke Mangan by TarraWarra (Yarra VIC ) I was surprised by its interesting almost Burgundian nose. Nevertheless, after having a sip or two it would have been tough to persuade me in that moment that you can make a drinkable and enjoyable Pinot Noir in Australia, not even getting closer to a superb Burgundies with all their complexity and expression of terroir.
I had a sip of a blend of Grenache, Merlot and Syrah 2006 from Diggers Bluff Stray Dog (Barossa SA ). This was the cheapest wine on the list at Salt and it also tasted like that. It was bland, far from interesting and fussy rather than striving for balance. I appreciated that the wine waiter allowed me to try this wine before ordering a glass. After this disappointment I also sampled a Shiraz 2008 Clonakilla Hilltops (Hilltops ACT) which was juicy and fruity with a soft touch of cassis and a more expensive and much more rich and deep with cassis and dark cherry notes 2008 Wild Duck Creek Springflat (Heathcote VIC).
Rebuking the Shiraz I found my favourite from all the reds – the Cabernet Sauvignon 2007 from Frankland (Frankland WA) was the only well-balanced and quite elegant wine from all the other reds by-the-glass.