Turin's chocolate used to be more renown than the Swiss. The European royalty endorsed the chocolate makers Al Bicerin (since 1763) and Baratti & Milano (since 1858) by stocking the court houses with the sweet delicacy long before Piedmont's Nutella brought gianduja to the modern consumers indulgent longings.

The royal affair with sweet confectionery of its time and scarcity of cocoa when the infatuation was peaking made Turin chocolate so good. Torino is the “Regal city of Italy”. The dukes of Savoy and later the king of Italy Vittorio Emanuele II. reigned from this by the Alpine peaks crowned throne. After the unification of Italy in 1861, Turin became the first capital of the heeled boot stretching deep into the Mediterranean. The city has been tussled over frequently – it used to be the part of Savoy, the world-renown Alpine French ski region, but also adherent to Piedmont that was occupied by France, and now is the breadbasket of Italy. 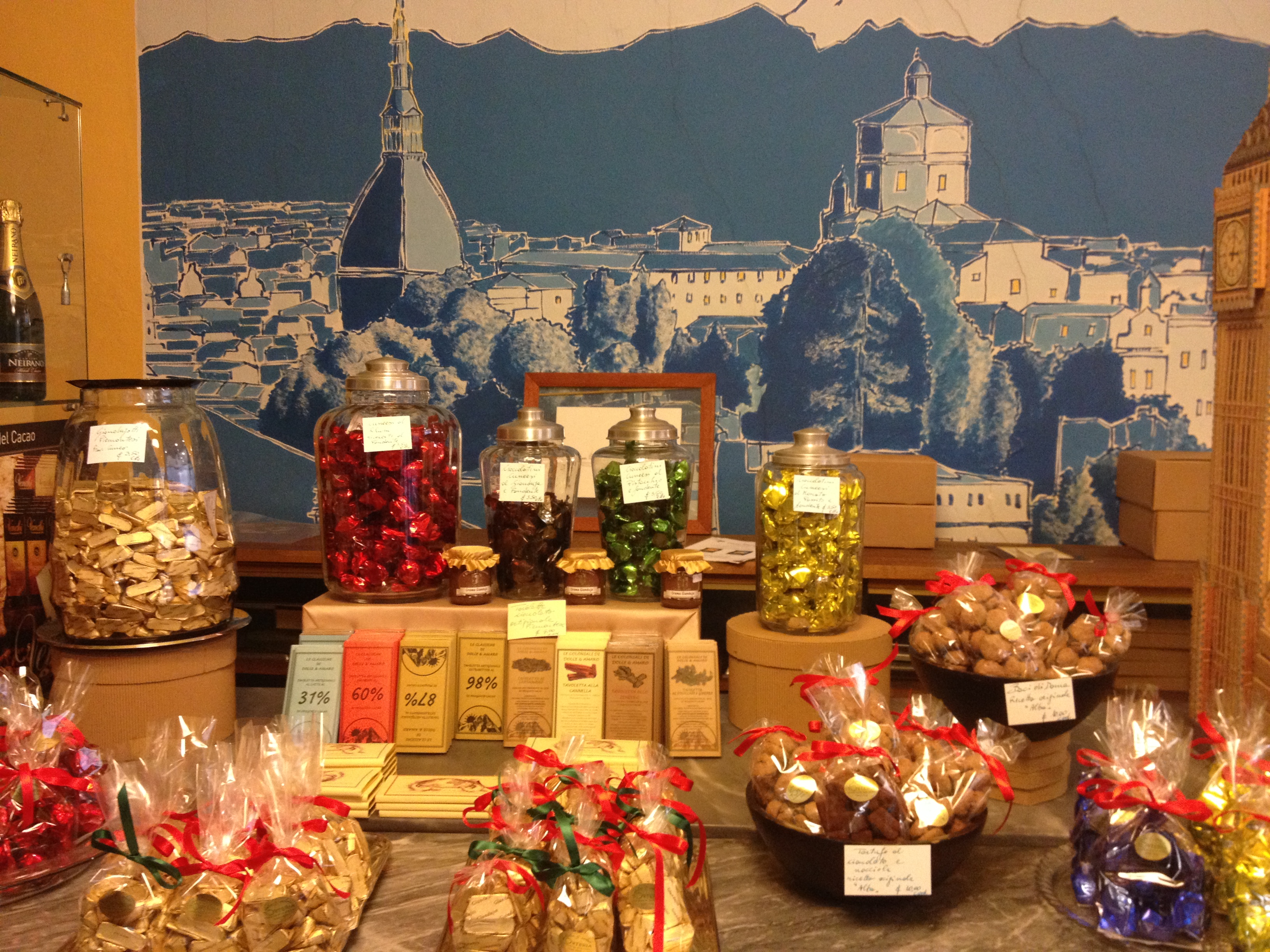 It might had been the proximity of the highly elevated Savoyard Alps that set the stage for chocolate settling cozily in Turin. Today, when skiing nearby in Courchevel I cocoon with a cup of hot chocolate to energise and warm up. The story goes deeper in history though. Chocolate was once a luxurious treat popular with the European royalty, and the palaces of the dukes of Savoy needed a constant supply of this trendy treat in the highest quality possible. Surely a potential impetus for the Turin chocolate makers such as Al Bicerin (founded in 1763) and Baratti & Milano (founded in 1858) to set their roots in Torino. Turin’s chocolate used to be more renown than Swiss. The European royalty endorsed the local chocolate makers by stocking the court houses with the sweet delicacy long before Piedmont’s Nutella brought gianduja to the modern consumers’ indulgent longing. 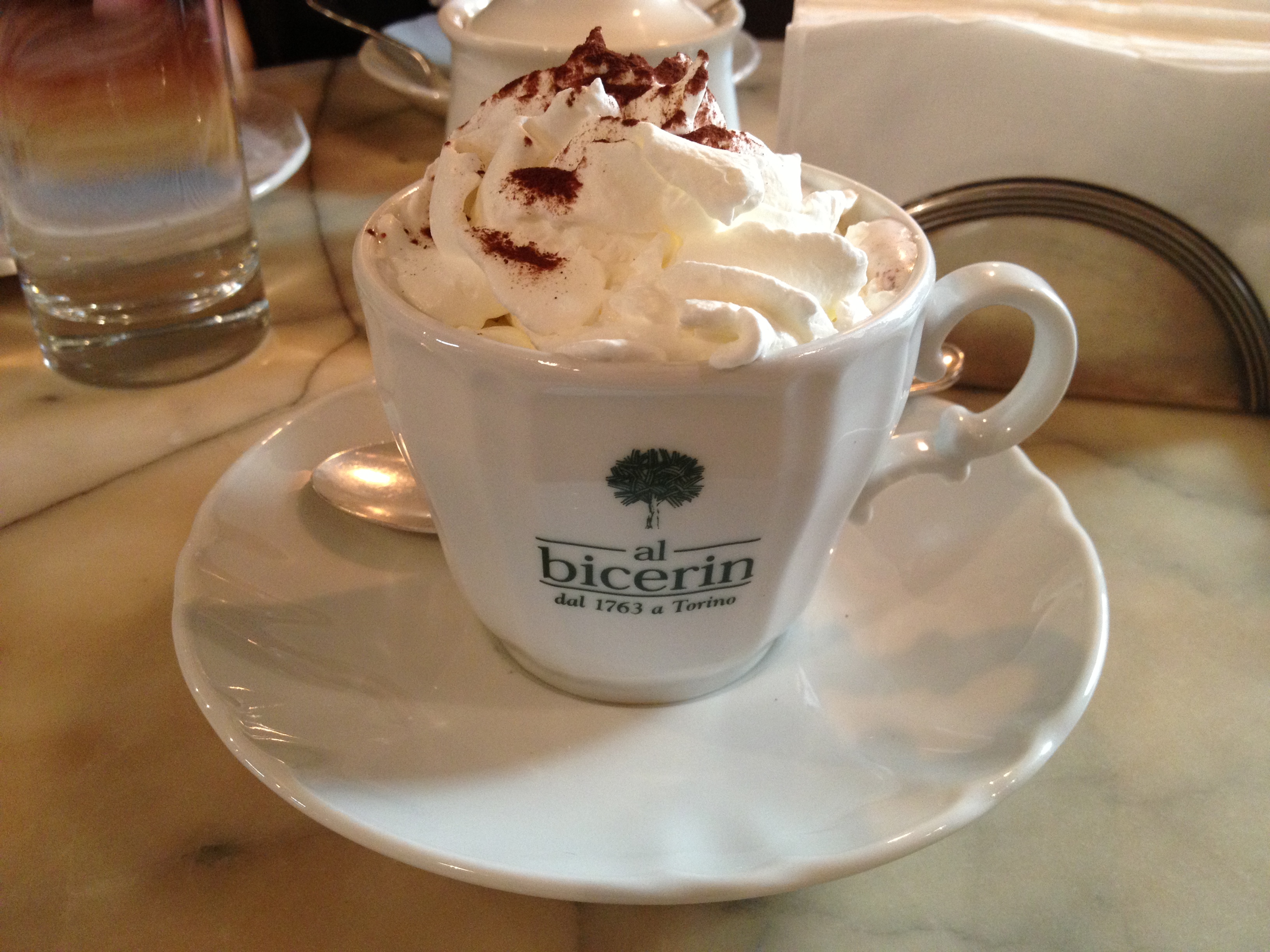 These confectionery producers pioneered making smooth chocolate with roasted Piedmontese hazelnuts – this is called GIANDUIA – and some hot chocolate drinks such as Bicerin.
The most popular cocoa indulgence in Turin still remains the classic dark hot chocolate, that is so exquisite at Baratti e Milano that it continues to draw hundreds of customers to their cafeteria on the Turin’s main square, Piazza Castello. It is so dense and perfectly balanced that I wish I snatched the clue to their “secret” recipe.
If plain dark chocolate is not satisfying to your palate’s whims then adding some whipped cream may do – Ciocolate con panna. Crowned by a homemade, thick whipped cream, the spoon has to force through to find a dark spot of the cocoa-rich substance underneath at Al Bicerin, the oldest café in Turin, still running since 1763.
Bicerin also stands for a warm beverage invented at this tiny café in the 18th century. Served in a tall, transparent glass Bicerin is an espresso with hot chocolate (a secret recipe again) and a cap of frothy, milky smooth cream. An energising treat on a cold afternoon or after a church mass nearby. Let it envelop your mouth with the creamy chocolate intensity, and savour the historic moment mindfully, guilt-free.

Zabajone is another specialty for adults, spiked with alcohol. The pudding-like yellow drink is made from an egg yolk base, sweet Marsala wine and sugar, and can be served with whipped cream and lady fingers or atop of gelato. Zabajone is not a chocolate drink though, but often complements a chocolate cake such as the award-winning Jessica at Del Cambio‘s Farmacia.
If lust overcomes you, pack your skis and stop on your way to or from the surrounding ski mountains as we do. The trouble is that you will wish to stay longer than just one night! 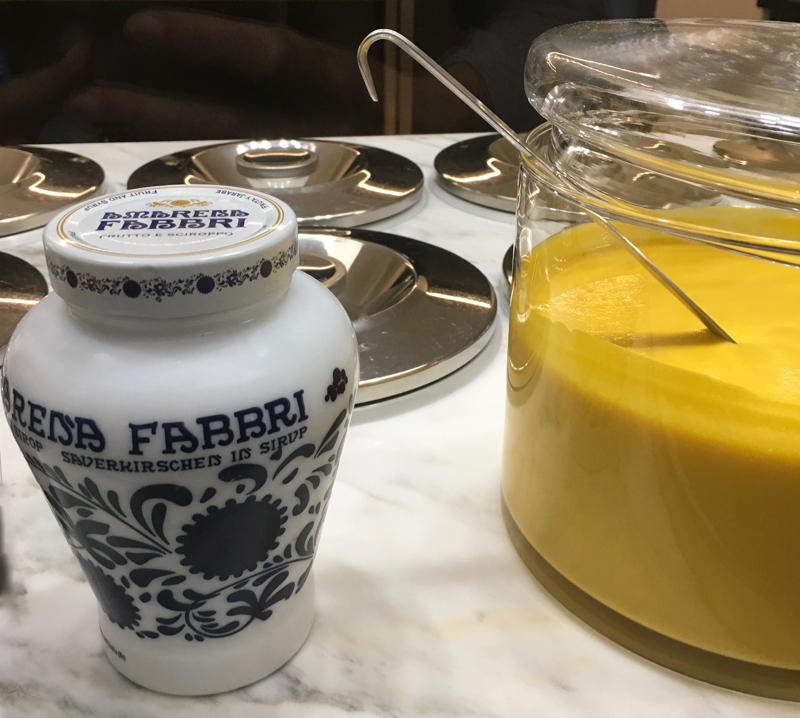 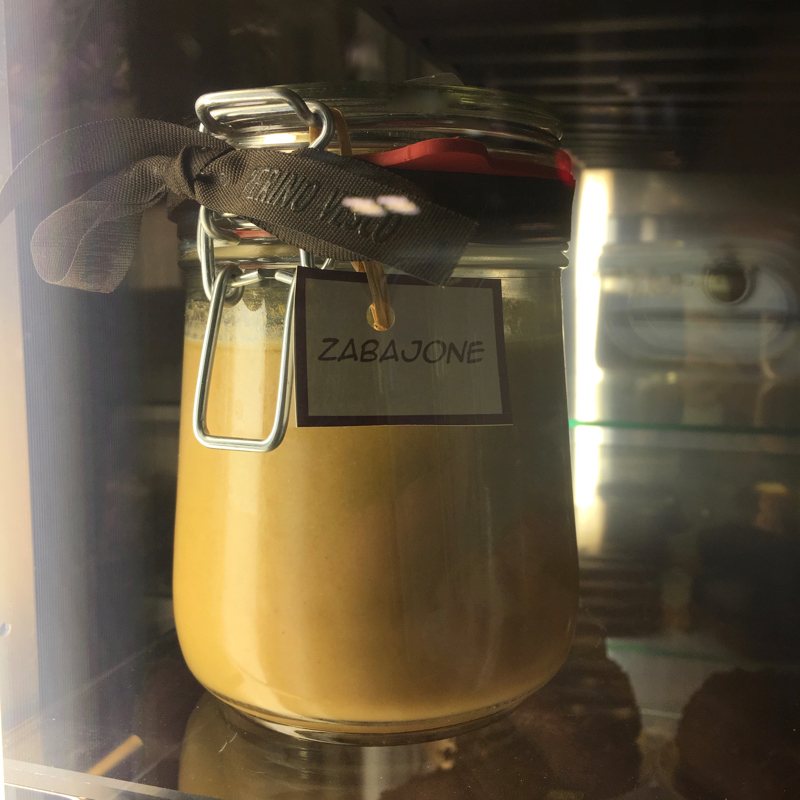 Chocolate shops and established, resurrected or new brands are like mushrooms after rain popping up all over Turin. The product line stretches from chocolate slabs, ganache, truffles, bread grissini enveloped in chocolate, panettone cake with chocolate, pasta with cocoa or just a plain powdered cocoa to make the drink at home. Al Bicerin wraps it nicely for a perfect gift, while the Michelin starred chef at Ristorante del Cambio served foie gras on a square of dark chocolate recently. 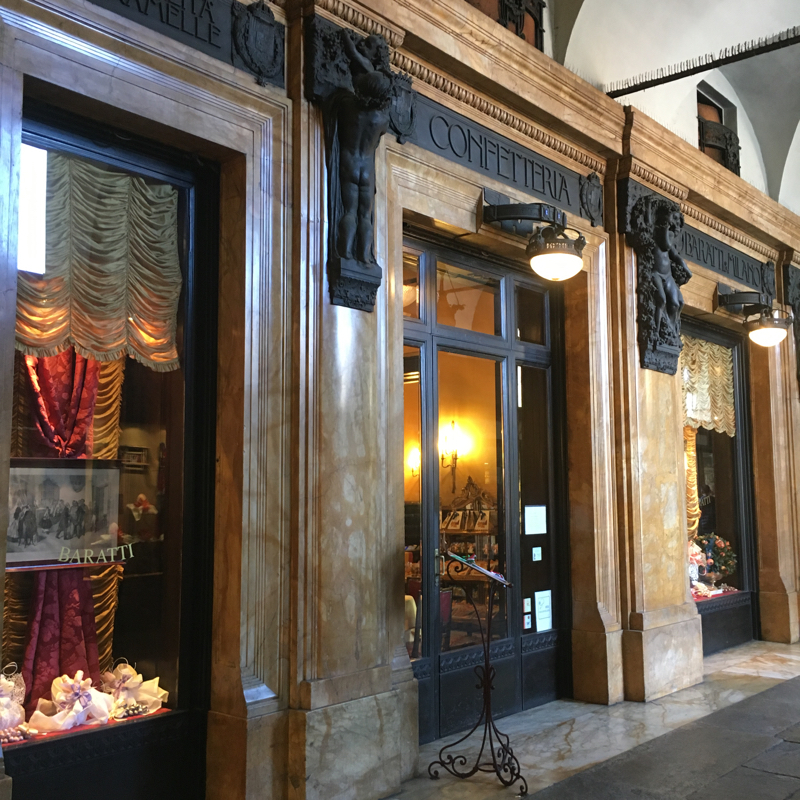 Baratti & Milano is a nostalgic historic café for breakfast, lunch and dinner as well as an afternoon cup of chocolate with homemade cake or chocolate ganache. You can also buy chocolate bars, even Grand Cru dark chocolates, luxurious truffles and other chocolate-based products. My penchant for dark chocolate left me with five large bars in hand and mouth later.
New successful brands making award-winning Turin chocolate like Guido Gobino who won a bronze medal from the Academy of Chocolate in 2011 for his Natural Soluble Powder for Hot Chocolate. The shop has its own luxurious tasting room at the back where you can compare their chocolates and pair them with drinks. During holidays find special creative chocolates such as the adorable Easter eggs pictured below. 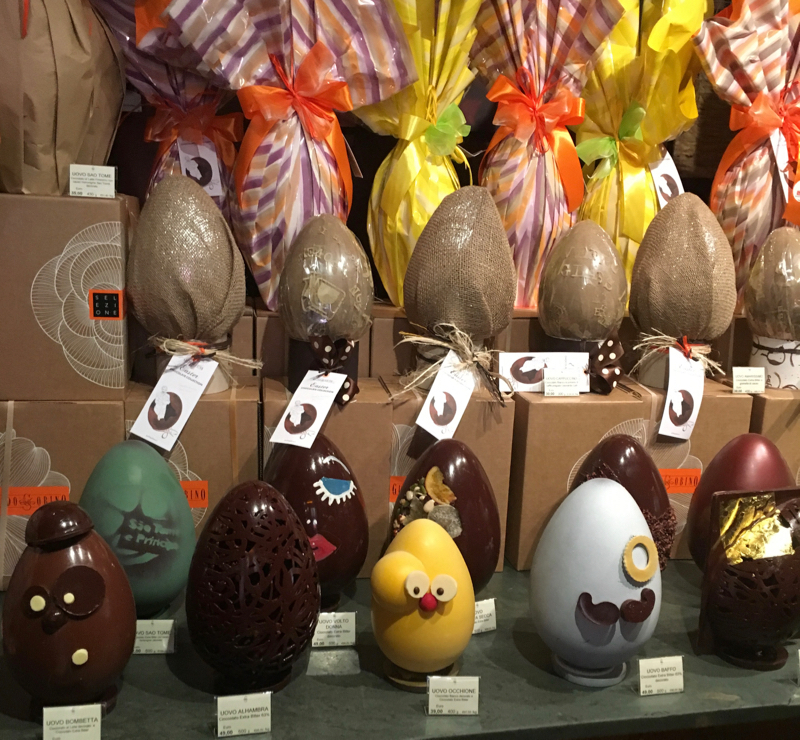 Guido Castagna “Natural Method” creates Gold award-winning chocolates and Giandujotto that he calls Giuinott to differentiate his ultra-creamy and flavourful product from the mass sold in Turin. The cinnamon, ginger and marigold petals dark chocolate”cremino”, Bronte pistachio chocolate bonbon, in dark chocolate enrobed whole nut pralines and gianduja, dark chocolate hazelnut spread “+55” and the Gianduiotto Fondente bar won repetitively golden medals at the International Chocolate Competition. Like other top chocolate makers in and around Turin, Castagna uses only IGP Piemonte Hazelnuts roasted slowly to perfection “tonda gentile“, but goes further to express the natural qualities of cocoa in his raw single origin bars, plus matures them for six months in a cool place. The Honduras dark chocolate bar is matured for a full year! Sourcing from certified child labor forbidding cooperatives graces Guido Castagna’s oeuvre manufactured in the nearby town of Giaveno. The Italian chocolatier is such a perfectionists that an insert with each purchase warns against the possibility of a “blooming effect”, the harmless white coating atop naturally preservative-free chocolate, and against lepidoptera insects forming when improperly storing chocolate with hazelnuts. Keep the gluten-free certified sweet jewels between 16-18 degrees Celsius and you will be fine. 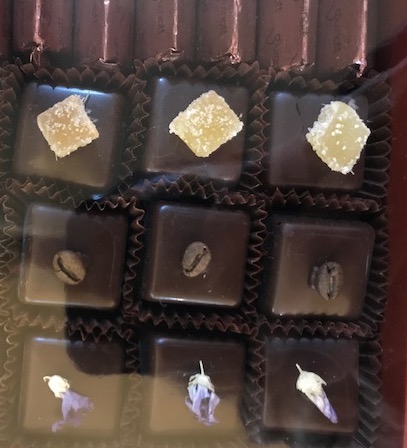 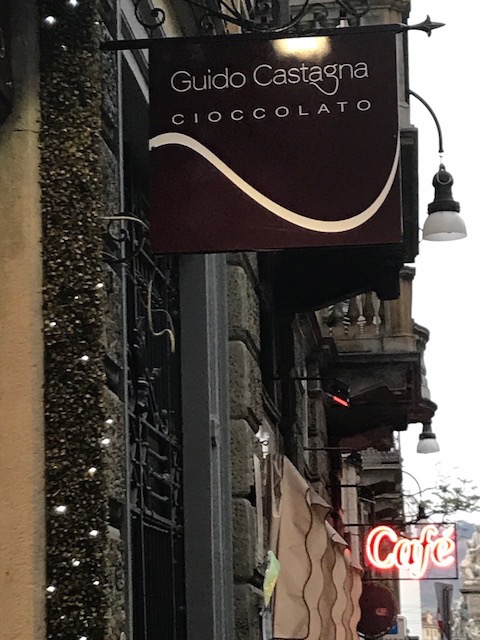 On the cobbled streets of  Turin chocolate is a common feature on the farmers markets. Some of the local sellers have a more daring selection (not necessarily better quality though) than most of the special chocolate stores. From white chocolate with coconut flakes, straciatella (chocolate chips in cream), cantaloupe and cinnamon in milk chocolate to crispy rice and basil in dark chocolate – the creative spirit of these boutique chocolate producers knows no boundaries! Cioccolateria Marino sells their inventions as well as some classic chocolates every weekend on the market across from the Town Hall built in 1659. 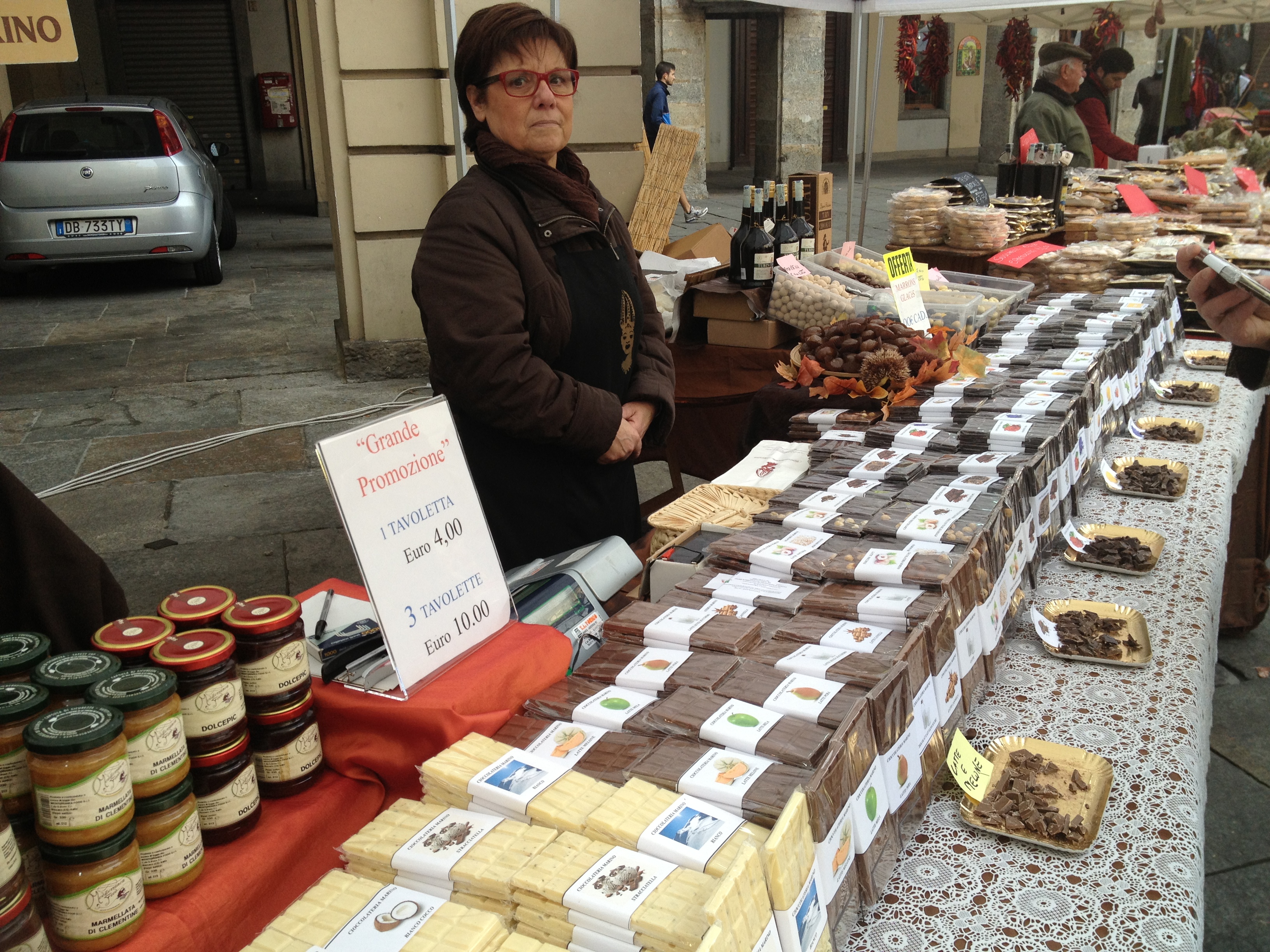 With chocolate virtually on every street in the centre of the historic town one gets seduced by many of the Turin chocolate stores, cafés and boutiques. Leave some space in you luggage before your trip, since most of the tremendous quality chocolates they produce there are rarely exported.