Osaka has spread across America from Lima, through Santiago, Mexico DF, Saõ Paulo to Buenos Aires, where in 2012 this luxurious chain of peruvian/japanese restaurants opened its second offshoot in the fashionable district of Puerto Madero. 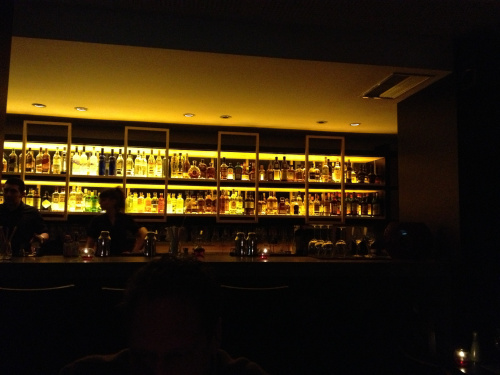 Food: Creamy and quite rich sauces accompany most of the Japanese cuisine-inspired dishes. Traditional Peruvian staples such as potato causa and ceviche got a modern revamp and some of the items were made intentionally to impress you with their unconventional presentation.
The Salmon tiradito – “Vietnamito” – is the culinary illustration of the Osaka’s enriching take on Japanese cuisine. The fish was of a great quality when we dined there, yet the sauce was just too sweet for our tastes. Imagine a raw salmon with marmelade – that is the lemon grass flavored chili jam sauce, red peppers and fish sauce on the fish. Served with grated coconut brittle it was indeed quite vietnamese in its own Osaka way. 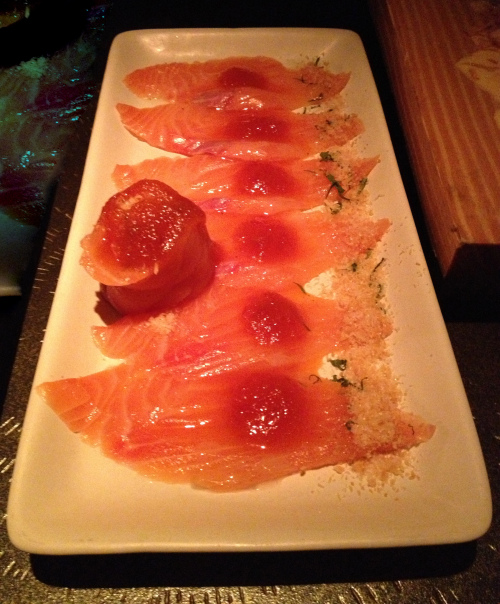 I preferred more the “Nikkei” tiradito. Nikkei in this tiradito is a blend of Peruvian ingredients: lemon, cilantro and chili peppers with Japanese: shoyu and wasabi. It was more pure and simple yet delicious.
We went for the Osaka Maki roll of King crab, seared scallions, and shrimp furai splashed with au gratin king crab “chupe” on the outside. As you can see on te picture below it was all-too-much. Flavors fighting over each other rather then enhancing its tasty properties. Rich chunk of rice with creamy sauce and hardly detectable crab would be my summery of my palate’s experience from this roll. 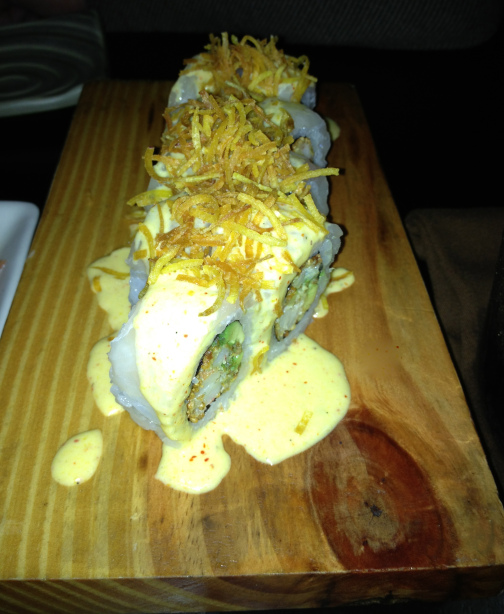 We loved the causas at Osaka in Santiago de Chile a year ago, yet as we were slowly realizing that the Osaka at Puerto Madero was far from the excellency its sister restaurant could take pride in, so we skipped them and moved to warm dishes. Causa is based on a potato puree (Peru has over 3,000 types of potatoes) seasoned with diverse savory condiments such as garlic and rich toppings. Its name refers to a fight for the same “cause” of the peruvians.
From the warm dishes we tried the Peruvian classic of flaming scallops. The Parmesan Scallops had its own Osaka touch. Again we loved the scallop dish in Santiago, but here in Buenos Aires we were very disappointed. The scallops were just too chewy, not moist and soft as they should be. Although there is nothing to spoil about melted parmesan so that one saved the dish together with the impressive flame in the middle of the plate that the scallops are presented with. In a similar fashion are made Mariscos al Fuego, which is a seafood mix in Japanese butter, again presented on fire. 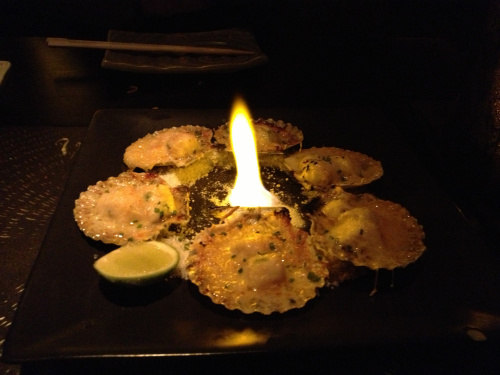 Atmosphere: Fashionable, dark and rather party feel like at Zuma, the globally acclaimed chain of Japanese restaurants. Dress fashionable yet do not worry about your attire too much as the Argentines are mostly casual. Upstairs there is a bar and a couple of tables so it can get a bit wild later in the evening (around midnight) and downstairs it feels a bit more like a buzzing restaurant. 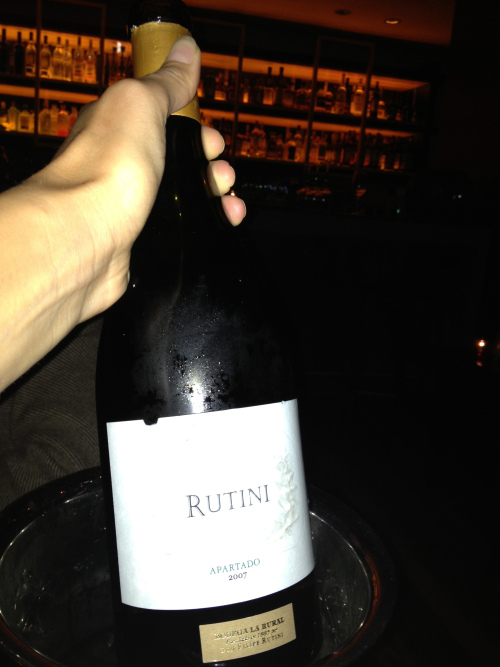 Drinks: Pisco-based cocktails are popular as well as other mixed drinks. The wine selection is quite wide, although not overwhelming. There are many wines suitable for the restaurant’s food and a sommelier eager to recommend you something your palate desires. We went for Rutini Chardonnay 2007 from Argentina. It is made by Felipe Rutini at Bodega La Rural high in the hills of the Andes. It was oaky, rich, complex and worked perfectly with the intensely flavored food at Osaka.
Cuisine: Peruvian, modern blend with Japanese – Nikkei cuisine.
Visit: December 2012
Price: High (this is one of the most fashionable restaurants in Buenos Aires).
Address: Juana Manso 1164, Faena Arts Center, Puerto Madero, Buenos Aires, Argentina.
Contact: Tel: +(54) 11 5352 0404