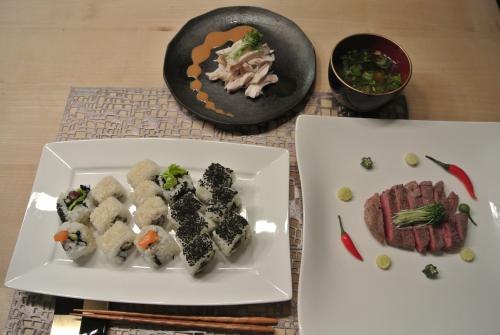 Chef/teacher: Yoko is from Japan, but she has been living in Switzerland for a while. She is a graduate of Tokyo Sushi Academy’s professional course and member of Japan Sushi Instructors Association since 2008, both adding credibility to her classes. She opened her cooking school at her tranquil  apartment in Winterthur near Zurich in 2007. She speaks fluently German, English, and of course her native language – Japanese. She offers various types of classes from basic nigiri sushi and rolls to everyday Japanese cooking. I have done a mix of all with inside-out rolls as my preference, since I have never done them before and wanted to learn some tricks. 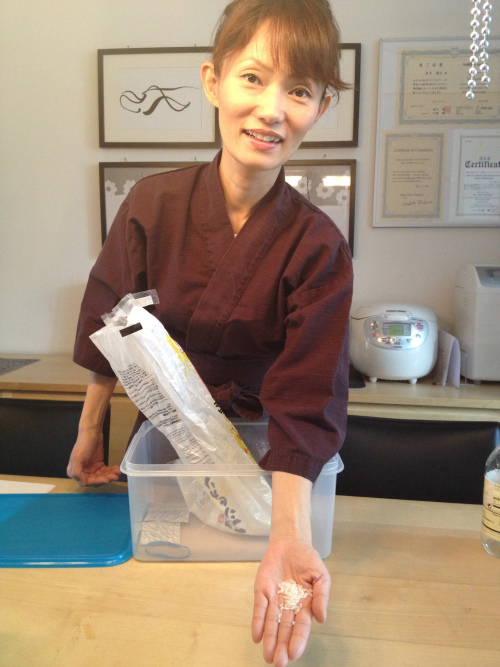 I loved the hussle-free pace of the course. It was rather a meditative and tasty afternoon enhanced by insights and complementary knowledge of Japanese food and culture. Since Yoko is Japanese, she was able to answer my curious questions about anything that crossed my mind during the cooking. I learned that sushi is rather a festive meal, than an every-day lunch or dinner item. In the West, many of us think that sushi is something like a staple food eaten in this exotic Eastern country. Yet, as my trip to Tokyo some years ago as well as Yoko’s testimony confirmed, there is plenty of diversity  in terms of food in Japan. And, I do not mean just a Spicy tuna on crispy rice, California maki or the Softshell crab tempura rolls one can see on the Western menus (most of them were invented abroad), but mostly the nourishing soups, delicious meat and unique vegetable dishes that are part of the dining culture across the distinct provinces of Japan. With the custom-made one-to-one class with Yoko, I got an insight into both camps – the traditional and the more modern adapted to locally available ingredients and aesthetical fashions of the time. 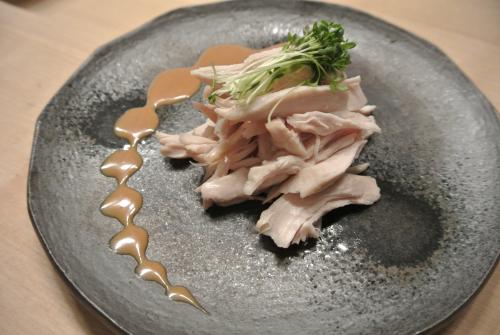 The four-course menu started with a warming cup of miso soup, whetted one’s appetite with tender Chicken with sesame sauce, added a bit of fancy intermezzo of inside-out salmon and spicy tuna rolls and finally was crowned by a juicy kobe beef steak with wasabi sauce.
The miso soup with wakame and spring onion was not as easy as you might think. My general approach to this Japanese staple to date was to add lots of miso paste (whatever type was available on my local store shelf) into boiling hot water, sprinkling some dried seaweed and pouring it into a bowl. Well, it can taste good (depending on how good the miso paste was), but it is not how it should be made if you want to reap all the benefits this nourishing soup offers. Not only did I kill lots of the beneficial enzymes in the miso by boiling it, but also ended up with less complex flavours in the soup. Yoko taught me to use a broth of dashi, which is boiled and then add the rest of ingredients including the miso paste by the end without boiling it. A sprinkle of spring onions on the top before serving made it look great and added freshness.
The Chicken with sesame sauce was superb! I had no idea that a simple thing like the usually boring chicken can be so fresh and tasty. We steamed the chicken breast in a silicone pot in a microwave for a couple of minutes. This is definitely a quick dinner solution for these in the rush. The silicone pot is a handy tool as it keeps moisture and the chicken does not end up dry and lifeless. The rich mayonnaise-based sesame sauce had been my favourite when I was living in Asia – I would buy it in a supermarket and put it on everything from salads to meat and sometimes even on a slice of bread instead of butter (naughty me). yet now I know how to make it fresh and how not to spoil it. Despite not being too complex, there are ways to make the sauce flabby. Whipping it consistently and adding ingredients slowly was the key to success as I learned from Yoko. 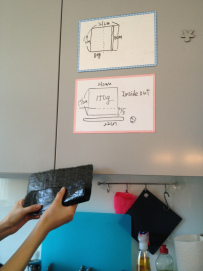 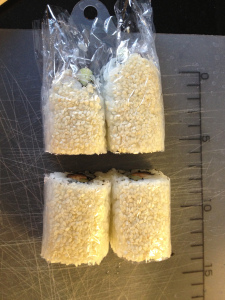 Making the Inside-out roll sushi (Spicy tuna roll and Salmon roll) turned out to be easier than I thought. The difference from the classical maki is that the seaweed is inside and the rice outside. One would think that it is much harder to make the rice sticky enough so it does not fell off the roll, but if you keep in mind a number of small tricks, you will make perfect rolls like I did with Yoko (I hope I will make them as pretty on my own, so far I have successfully repeated only the chicken, miso soup and the beef recipes). Keep the measurements in check. As the pictures above show, the nori seaweed has to have the right dimensions (just crack it), but also it is useful to buy a cutting board with measurements printed on the side so you can check the width of each piece as you cut the roll. Start with cutting it half, then each half to halves and you will get eight pieces from each roll. The imperfect ends can be flipped on the plate so they still look cool or you can just eat them before serving. The rolls were the most difficult to make. 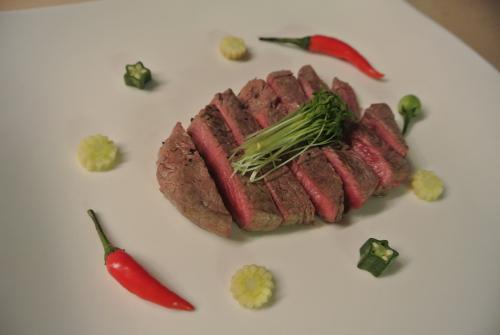 The main course was superb yet easily prepared. The Beef steak with wasabi soy sauce required finding the best quality of beef for it to be a success. Yoko’s origin is not too far from the legendary beef area of Kobe, so I believe her palate is very sensitive to a great beef. Her choice of a beautifully red and meaty rather than just fatty chunks of steak that I have enjoyed tremendously proved that my palate sensitivity is similar to hers. Pounding the meat gently through a layer of plastic sheet so it keeps its shape is crucial and then just ask your guest – rare – medium rare – or well done? And a perfect steak is ready to be served. The wasabi soy sauce is simple. Just put a knob of butter on the heated pan, add some freshly grounded wasabi (or wasabi paste), stir in some soy sauce and voila, you have a companion to your juicy flank of meat. 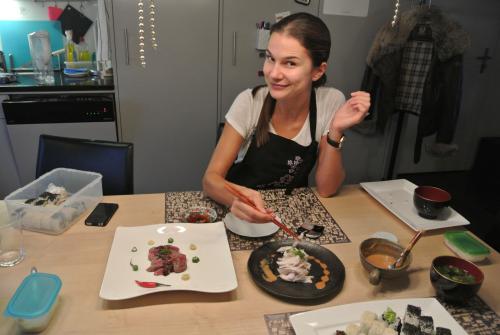 The resulting four-course dinner I cooked with the help of Yoko was better than in many restaurants, teaching me that if one knows “how to”, then cooking at home can turn to be the best gourmet experience in town!
Yoko is thoughtful and lists her favourite shops on her website, so you can buy the right ingredients while in the area of Zurich.
You can bring your own wine or any other drink than water since Yoko clinched my thirst for the later, but she acknowledges individual preferences for other drinks. I was in Switzerland shortly and did not have time to browse local wine shops, so I missed on this great opportunity to pair my meal with great wine. I would go for a crisp Riesling or slightly oaky Chardonnay with the sushi and the chicken, and a bolder Cabernet Sauvignon or plump and fruity Malbec with the wasabi steak.
Contact:  info@sushi-yoko.ch. Online class calendar or via online form suitable for private classes.