Wolfgang Puck‘s California meets Europe restaurant Spago was the first row ticket to his success on the LA’s dining scene. The Austria-born chef was the pioneer of the contemporary California cuisine in the City of Angels over three decades ago. He blended the local, by sunshine blessed ingredients with the world’s cuisines, respectively Asian, South American and European. Spago right from the start became the mecca of power lunchers in Beverly Hills.

At Spago, Puck’s new Californian fine dining is brought to its current shape by the Executive Chef and James Beard Awardee Lee Hefter. The farm to table philosophy at Spago includes some sustainable and locally grown produce, but also the American pride from all over the country such as the Maine Lobster, Fanny Bay Oysters, California Wild King Salmon, Snake River Farm’s Braised “Wagyu” Short Ribs and many other land and sea-bound proteins muscled into Spago. The source of each major ingredient is disclosed on the menu, so the diners know where their food comes from. The chef joined the trendsetters of the current desire for local and the origin disclosing ingredients. 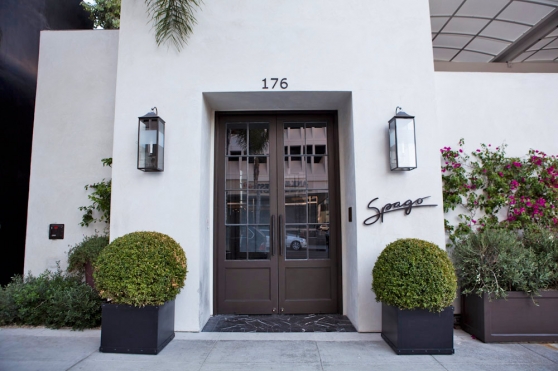 Wolfgang Puck and his business partner Barbara Lazaroff redesigned the interior as well as the menu at Spago aiming to inject a new vibe into their flagship restaurant. The new design is a success, but the menu might slightly disappoint its old timers. The large dining room features clean aesthetics, incorporating natural elements for an organic feel. The patio is naturalised through a streaming water panel as the centrepiece, green plants and rustic red brick walls surround the outdoor area. Dress smart as this is a popular hangout of the city’s top executives and other high players. 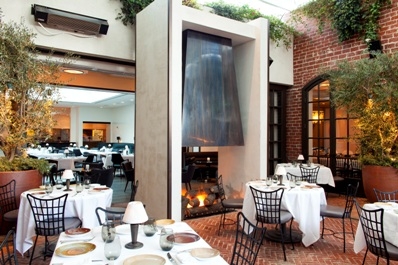 If you want to savour the chef’s European origins try his take on the traditional Austrian schnitzel, which is a delicious thin-cut slice of veal breaded, pan-fried and served with savoury vegetables. From the starters the Chino Farm’s Vegetable Salad, Pine Nuts, Feta Cheese, Snow Peas, Artichokes, is a nice taste of the local by Europe inspired seasonal bounty. Another good, but heartier meaty starter the Marcho Farm’s Veal Filet Mignon Tartare, Smoked Mascarpone is a great choice for raw meat lovers. The smoked mascarpone crowns the dish with its richness and softness balancing the chopped chunks of meat. 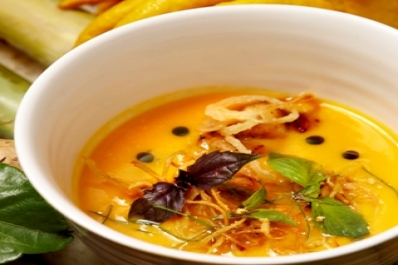 Spago offers Italian-inspired “fresh, wild and organic” courses of pasta and seafood. The Sweet White Corn Agnolotti, Parmigiano Reggiano, Mascarpone, Sage are popular. In a truly American fashion, the steak is the highlight of the menu and the chef’s steak venture CUT at the Fours Seasons hotel underlines his passion for the much celebrated American meats. The Grilled Dry-Aged New York Steak served with Potato-Bacon Terrine, Sauce Bordelaise has French influence, but the meat is from America. The chef could catch up with the millennial diners by offering more vegetable centric plates in his garden plates. The starters have some plant thought in them, but vegans will not find much as cheese appears where chicken, shrimp, fish or beef lost their way in. The Sweet Corn Soup could perhaps go without the Emmental Cheese Soufflé and Parmesan Crisp.
The bar is a place to catch up over cocktails or a glass of wine with specially prepared bar bites such as juicy cheeseburgers, meat balls, Chinese dumplings, marinated chicken wings or the chef’s legendary Pizza with house smoked salmon, dill, creme fraiche and chives, which is my favourite dish from the entire Spago menu. 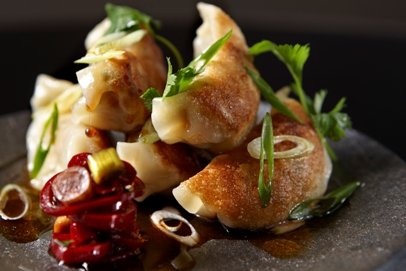 The wine list in Spago has won multiple awards and deservedly is one of the best in Los Angeles. The coveted Wine Spectator Grand Award was achieved under the helm of Master Sommelier Christopher Miller. The restaurant’s 30,000 bottle collection guarantees a wide selection. Everyone can find something interesting even with a tight budget. Having deep pockets though is an advantage since many rare and iconic Californian treasures are cellared here. Wines from other countries are not forgotten with Austria being well-represented.
In the US, Wolfgang Puck is ranked among that generation of celebrity chefs like Jean Georges Vongerichten, Gordon Ramsey and Daniel Boulud. For me his off-the-gazes restaurant at the Bel Air Hotel is currently more consistent and the fire meets alfresco dining environment makes the ocassion more special.
Closed Monday and Sunday.