The head chef at Red Medicine Jordan Kahn trained in a number of America’s best restaurants including the lauded French Laundry. Native of Savannah, his youthful American curiosity directed Kahn’s career choices and landed him a number of cherished apprenticeships from San Francisco to New York. 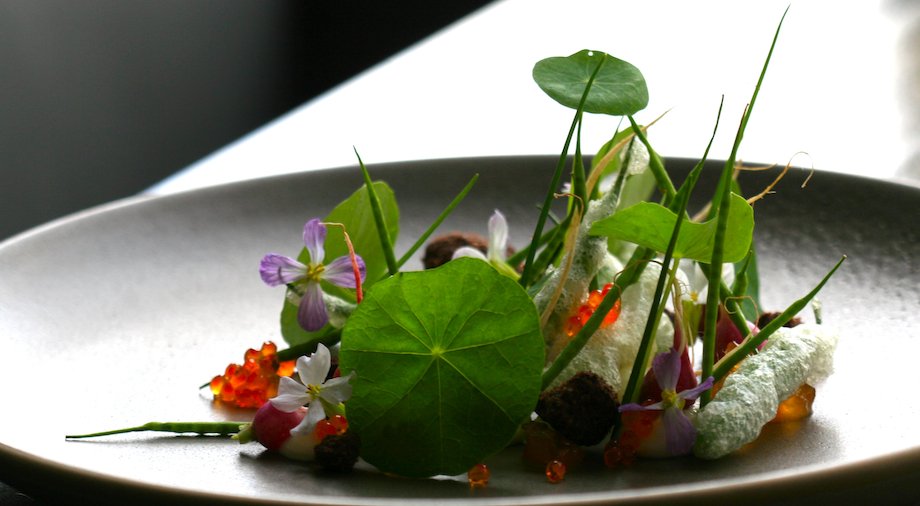 Starting with an edible forest served on a wooden block might be quite an adventure for anyone, save for the Noma devotees (voted the best restaurant in the world for two years until 2013), so it may arrive as a surprise that the jostle of foraging really tastes very good. But this is just a kickoff, since most of the dishes on the Red Medicine’s menu are awe-provoking.
The Chicken Dumplings with pork fat and lemongrass are more like buns à la shish-kebab satisfying the meat hunters. The Leek with yuzu and buttermilk arranged like a museum art piece on the plate that one is afraid to touch from fear of setting off an alarm, is vegetarian-friendly and biodynamically grown. The Dungeness Crab, the oozing richness of the adventurous Santa Barbara Uni with an almond milk subduing the acquired taste of this spiky sea creature, and most of the other ocean produce are locally sourced.
The food at Red Medicine not only looks amazing, but after trying about half of the menu we had to conclude that every single morsel was gushing with an abundant taste, depth, complexity and variety. Unlike many of the gastronomic eateries that sprung up across the globe like mushrooms after the warm fall rain, Red Medicine is worth trying. It does not come cheap, so count with a special treat. The six-course menu costs $65 (add $35 for drinks pairing) and will be potentially cheaper than ordering a la carte if you like to eat a lot.

Cuisine: Modern, international with Asian and Nordic influences, not Vietnamese as is often described.
Visit: September 2013
Price: Medium to high (you need to order many courses in order to be sated as most plates are quite small).
Atmosphere: Red Medicine’s casual, buzzing feel together with an open kitchen and bar concept add free spirit. It is youthful but won’t outrage seniors, except those not keen on noisy humbug. The restaurant is more like a huge open bar serving trendy and innovative fare with a smile on the waiters faces.
Drinks: The cocktails are popular, but the wine list was too seductive for us, so we succumbed. First, we sampled a number of rather unusual wines-by-the-glass, but these did not stick so we voted for a lovely and refreshing bottle of a white Riesling ‘Steiner Hund’ by Nikolaihof from the Wachau Valley in Austria. The dry Riesling befriended most of the ordered plates, although pairing it with meat was challenging so we switched to a glass of red. The wine list is focused on German and Austrian producers, but you will find some American, French and even Italian bottles. Not many snug under the $50 tag though, so prepare your valet for a slight splurge à la Beverly Hills.
Daily dinner 6pm-2am
8400 Wilshire Blvd, Beverly Hills, CA 90211
+1 323 651 5500