Iggy’s is named after a restaurateur, sommelier and its owner Ignatius Chan, called by his friends “Iggy”.
For many years considered by the local epicures the best restaurant in Singapore, Iggy’s also features in The World’s 50 Best Restaurants since 2009, climbing up year by year to 27th position in 2011. Becoming the first restaurant in Singapore to be on the coveted San Pellegrino list is not its only achievement as it was also voted the best restaurant in Asia three times by the Miele Guide. If the Michelin inspectors sniffed and tasted around, Iggy’s would have certainly scored a star. 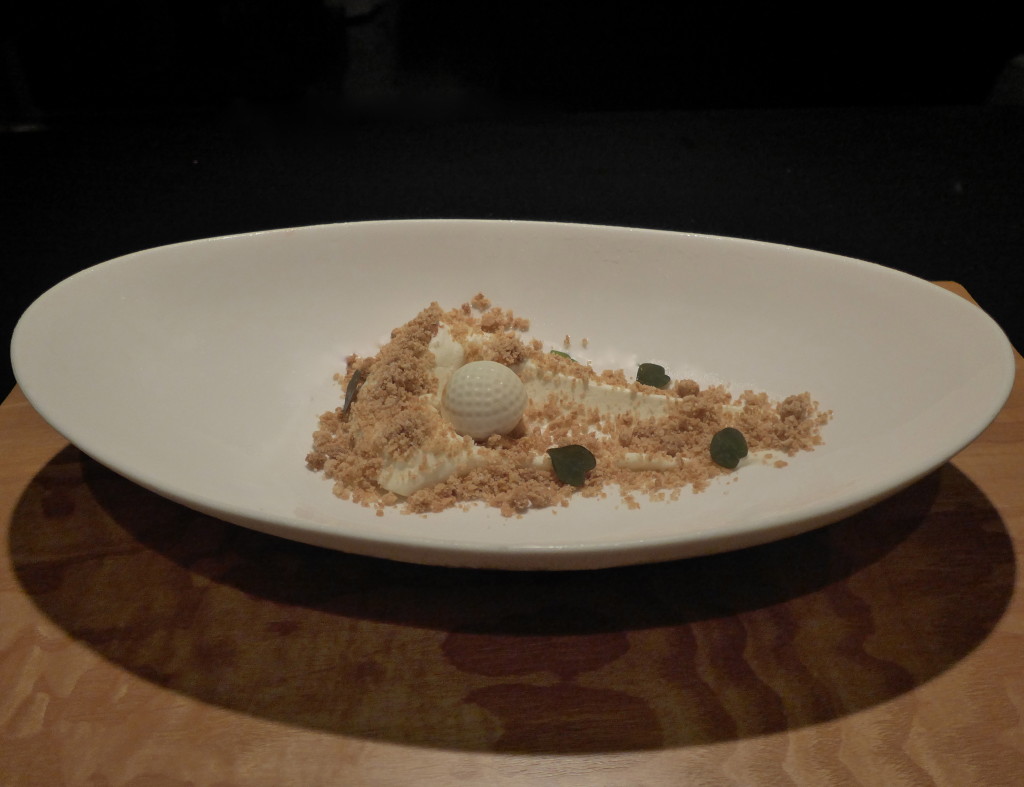 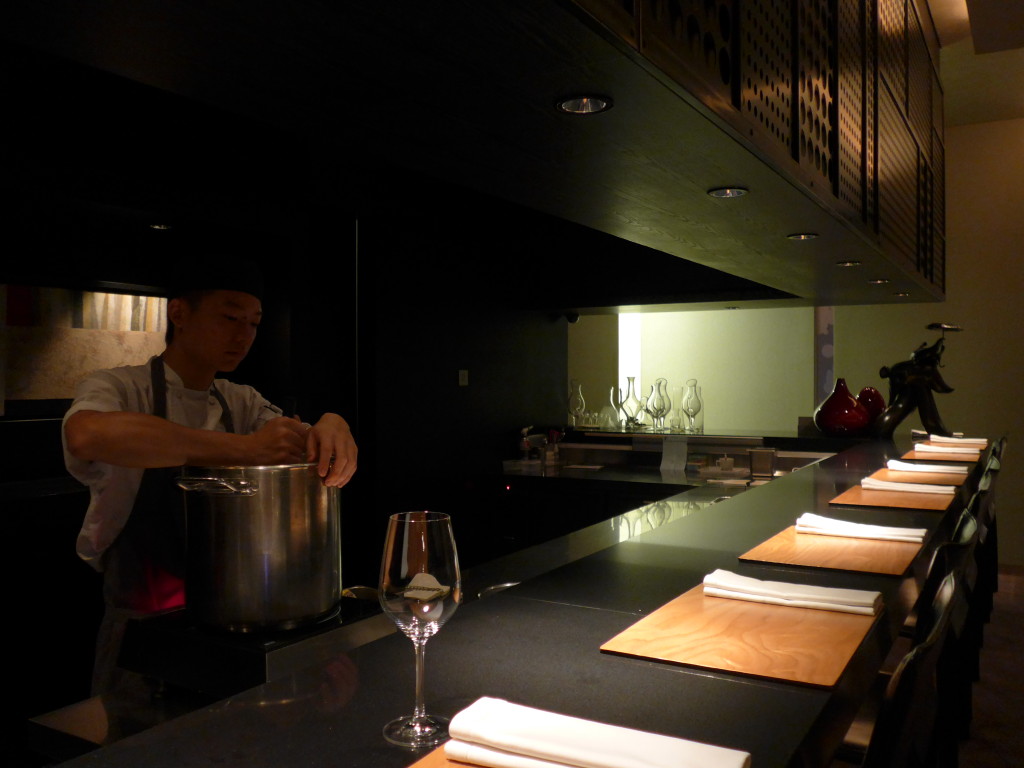 Atmosphere: Formerly located at The Regent hotel (since its opening in 2004), the restaurant moved to larger and more convenient new premisses at the Singapore’s Hilton hotel on Orchard Road in 2010. The seats alongside the bar breathe a brisk, casual yet intellectual whiz. High up from your stool you might learn some culinary tricks from a young chef (probably a trainee) laboriously melding the ingredients for the chef’s signature milk ice cream and squint inside the kitchen every time their sensor-directed door slide to open up. The most curious can dine inside at a chef’s table. If you prefer a discreet setting book one of the two private dining rooms. Although the space is almost a double of its original size with the same number of seats, some guests still complain about tables being too close. For others, this is an excellent opportunity to meet like-minded foodies. 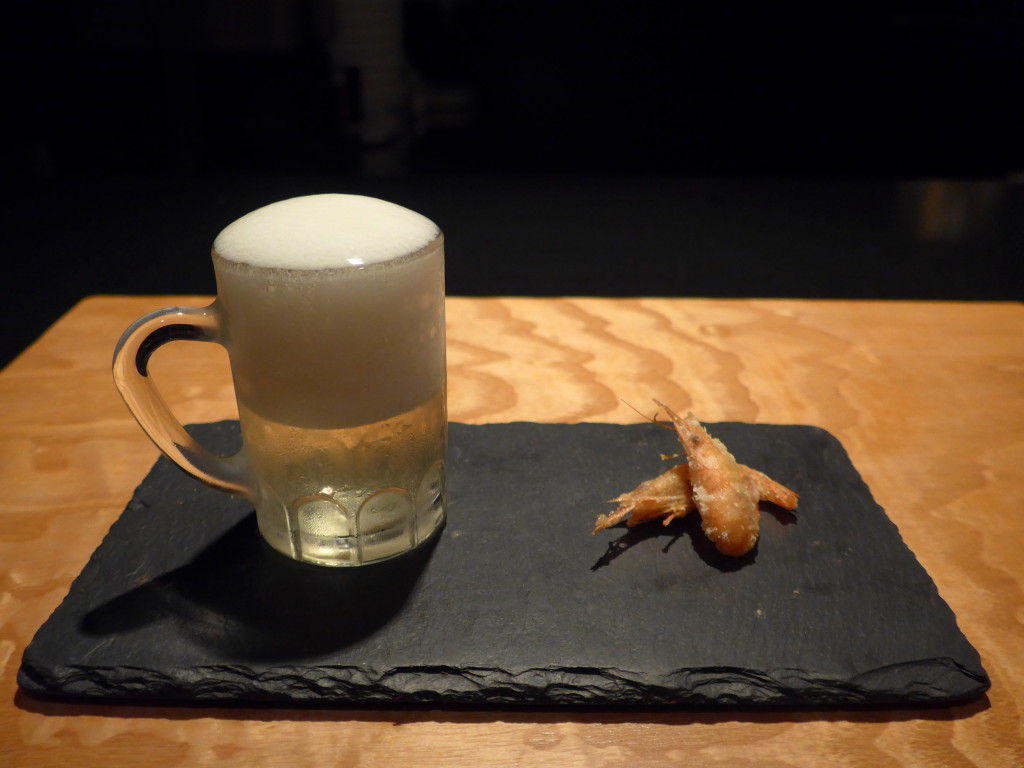 Food: I have eaten at Iggy’s twice within a span of three years. In the current menu the head chef Masahiro Isono‘s japanese roots are strongly reflected with the key ingredients sourced from the far East Asian island country. Ignatius Chan himself participates on the menu creation together with the chef. His stints at the Ritz-Carlton in Madrid, Hôtel de Crillon in Paris, Hôtel Royal Champagne in Reims alongside other distinguished culinary establishments in Europe and Asia, are regal stamps of approval for his intervention in the kitchen. 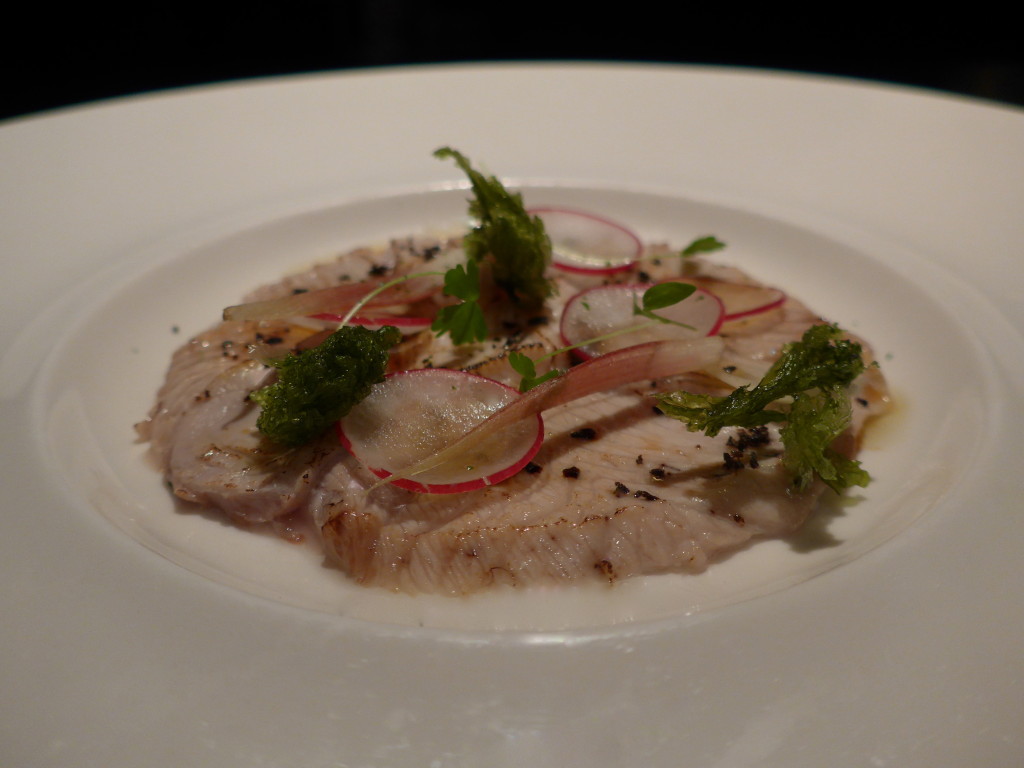 As a surprising mouse-bouche of beer served in a dewy cold glass with fried shrimps arrive, our eye lids flicker, our lips spout and released dopamine rushes into our minds (dopamine neurons become activated when something good happens unexpectedly, such as the sudden availability of food). A slight disappointment follows as in what appears like a beer is not a local hops brew, but a whipped weirdly tasting liquid topped with egg-white cap. Bad start, but no worries as it will get better.
The first item from the dinner menu sets our taste buds to a better mood. The meaty textured starter of a slightly seared Buri fish Carpaccio, sliced thinly, but not paper-thin, was sprinkled with wads of crispy sea lettuce, myoga, sesame and freshened up with lime vinaigrette. 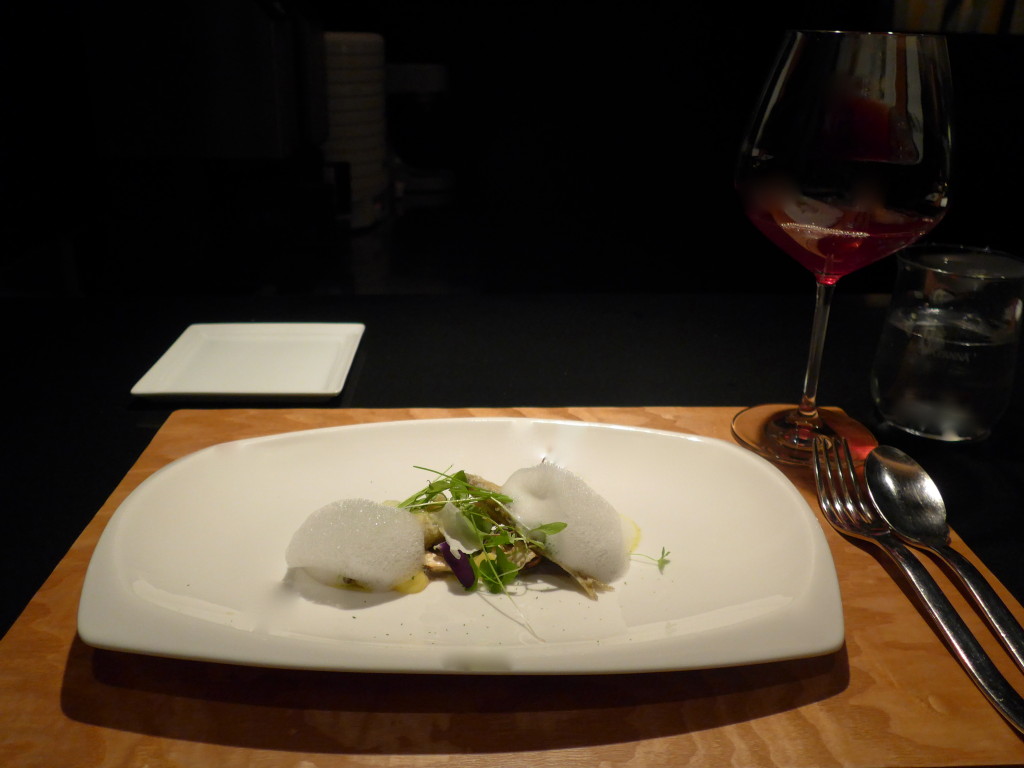 Next came even a better and rare treat. The japanese Matsutake mushrooms were covered in the molecular white foam together with the japanese Wakasagi fish (sweet water fish swimming in lakes and bays around Hokkaido), sudachi, hollandaise and bagna cauda. The Tricholoma matsutake or pine mushroom is highly aromatic and hard to find. The cherished truffle of Japan is also popular in China and can fetch up to $2.000 per kilogram. Matsutake, was documented as early as 1712 in the “Wakan Sansai Zue” encyclopedia, where the mushroom was reported to add fragrance to a steamed rice. One of the well-known areas, where matsutake flourish is in the mountains around Kyoto. John Ashburne of Japan Times took the adventure In search of the Holy Grail of mushrooms. 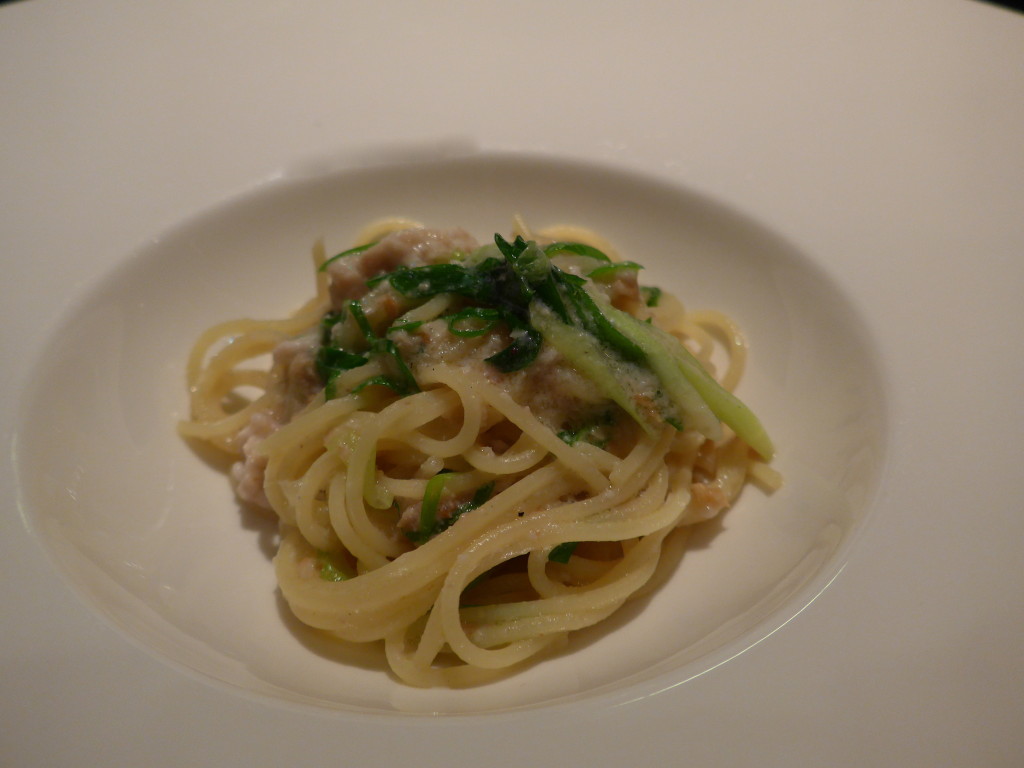 The Spaghettini with cod’s milt, onion and sansho powder are a genus of the chef’s staple and speciality pasta served with quirky seafood. Intriguing for sure, yet with a pinch of diplomacy I would conclude that the Italians know better their craft of pasta making.
The fatty and glossy Joshu Gyu japanese beef steak was rolled in a thinly pounded wrap, chewy and mouth-watering for the “meatholics”. For me it was just too much fat and not much lean muscle, although smelling heavenly. Accompanied by tiny slices of  heirloom carrots, nasu (eggplant) and mangaji adding contrasting vegetable airiness. 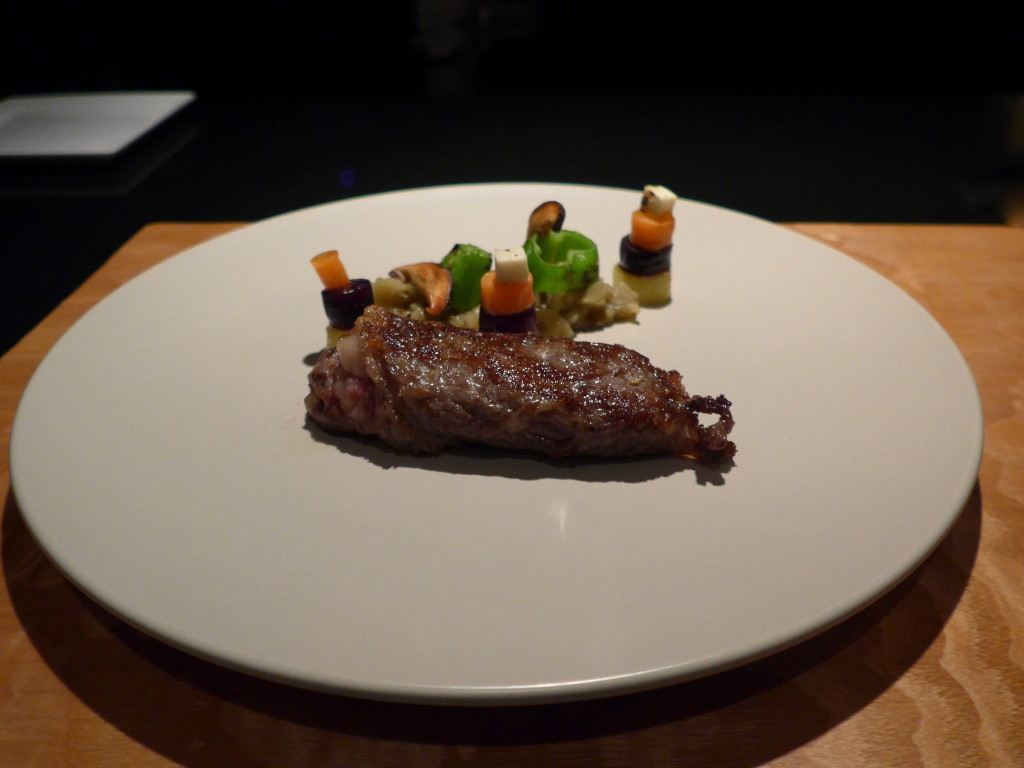 The dessert was a high game of creativity. Called Ball in the Bunker, its presentation of a white chocolate coated golf ball filled with passion fruit and ginger, cozying in a sand-like hill of milk ice cream sprinkled with crumbled  cereal, was not just witty but also delicious. My favourite item on the menu that was a highlight of the dinner. 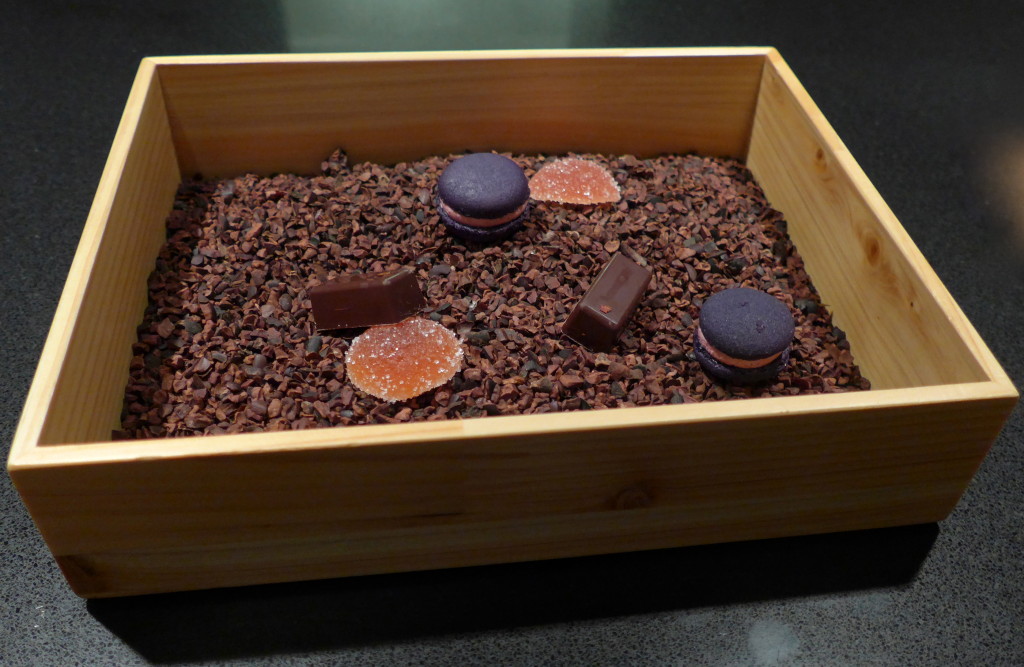 With tea came the Hinoki Chocolate Box of home-made milk chocolates and macaroons served on a carpet of crumbled cocoa nibs. It looked better than it tasted though.
Drinks: Since one of the founders is a sommelier and his favourite grape varietal is Pinot Noir, you will find a wide selection of Burgundies and wines from other countries based on this thin-skinned red grape varietal. Some of the wines by the glass we had were an Austrian Gruner Veltliner made by Loimer, and from the new world a crisp Shaw & Smith Sauvignon Blanc as refreshing aperitifs. To finish up with a jammy and mouthful, we went for Edmeades Mendocino Zinfandel from California. 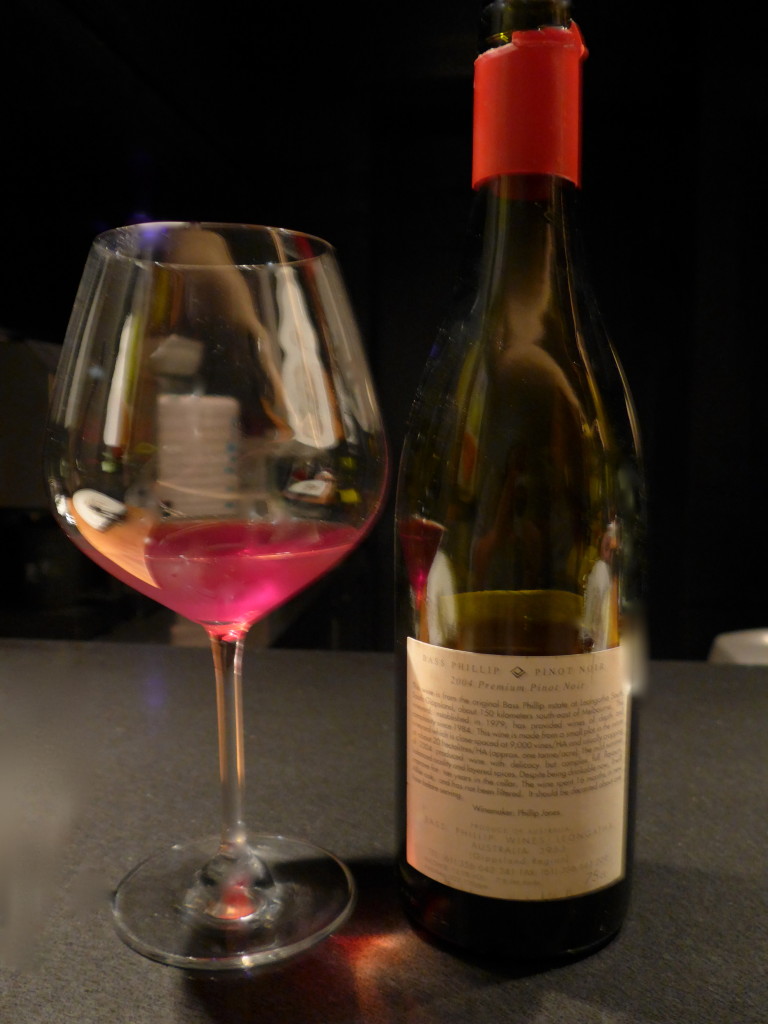 A bottle of rare and highly prized Pinot Noir from Bass Philip recommended by the sommelier was superb. Unfiltered, its neon pinkish colour might deter some, but top Burgundy lovers will sigh with pleasure while sipping this gentle and fresh beauty from Australia.
Tea supply from Twinnings does not indicate the proprietors passion for this Asian liquified jewel, yet it is a signature of a former British colony still infatuated by its ruler’s former glamour and trade power.
Opening Hours: Mon-Fri Lunch: 12pm – 1:30pm; Dinner Mon-Sat: 7pm – 9:30pm; Closed on Sun.
Address: The Hilton Hotel, Level 3, 581 Orchard Road, Singapore 238883
Contact: Tel: +(65) 6732 2234 or book online at iggys.com.sg