Imagine flour-less linguine tasting better than the heavy gluten pasta. The air-light fragrant foamy sauce and truffles foul your senses as to believe that you are actually eating the naughty carb and cholesterol-rich plate. But, you are not.

Maní is named after manioc, the native Indian goddess, that according to a legend was buried in her aboriginal home in Brazil where the first root of this tropical woody plant grew.
Also known as cassava, cassada, yuca, mogo or mandioca (Manihot esculenta), the manioc root became a ubiquitous traditional ingredient of Brazilian diet.
Cultivated for its edible starchy tuberous root, according to Science Daily  manioc is also” the third largest source of carbohydrates for human food in the world“. At home, I love it baked or deep fried as a snack. 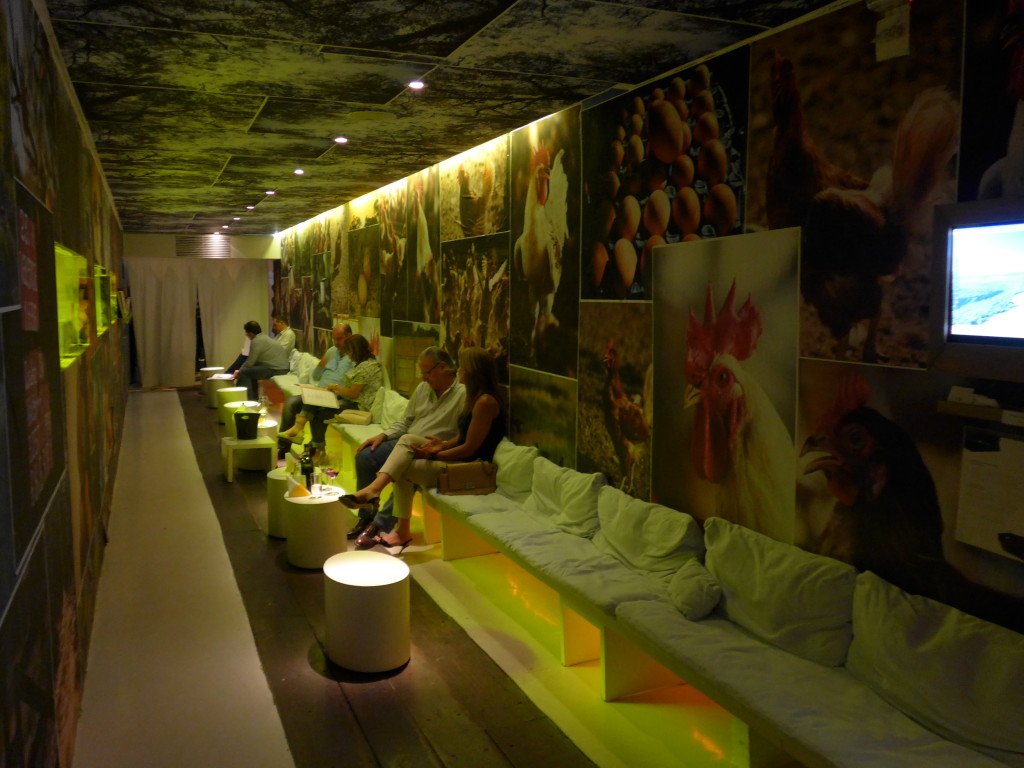 Potatoes are known as a pre-eminent source of crabs as well, but they can seem dull for most picky eaters. Manioc is more fun and versatile than one might assume, and at Maní the chefs know how to turn this ingredient into a desirable treat.
The maestros of manioc in the kitchen are a Brazilian native Helena Rizzo and her Spanish husband Daniel Redondo. They both worked in the kitchen of the world-famous restaurant El Celler de Can Roca (voted The World’s Best Restaurant in 2013), and also both boost with starry apprenticeships. To our tastes Maní is the most impressive Brazilian sourced dining in Sao Paulo, better than D.O.M. and much more welcoming. 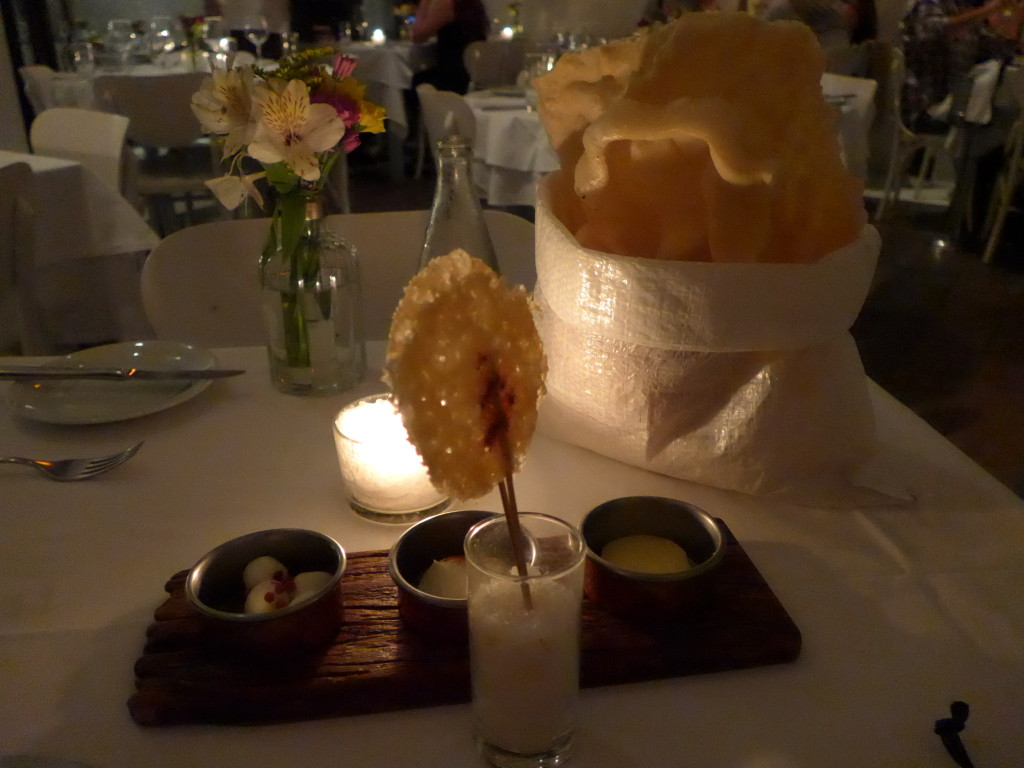 Their first big project together employs contemporary cooking techniques while highlighting Brazilian ingredients. Seasonable, local and organic whenever possible, these are the fanfares inviting modern conscious diners inside the restaurant. Like at DOM, Brazil’s most lauded restaurant that is currently ranked fourth in The World’s Best Restaurants list, at Maní the cuisine is eclectic and highly experimental. The chefs constantly search for palate-luring ingredients in Brazil’s lush nature from the Northern Amazon to more central states and as far as the Rio de Janeiro’s national parks.
Manioca starch can be as airy light as in the fluffy white crisps served in a bag together with various dips, peppered butter and crunchy parmesan lollies. These teasers are just the start of an indulgent Brazilian feast in style at this modern São Paulo institution. 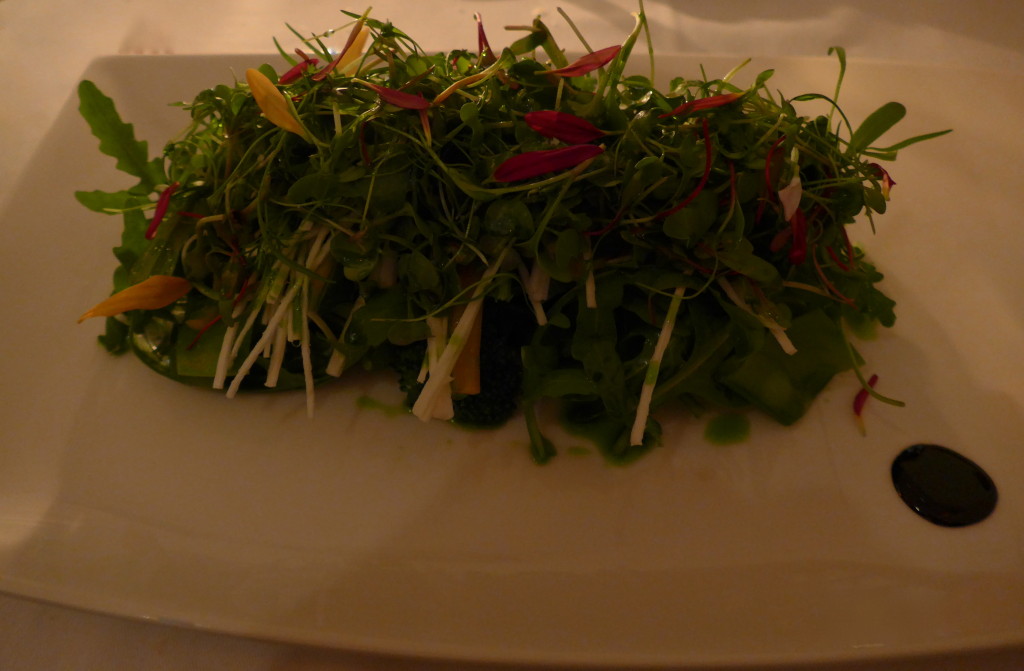 At Maní creativity, freshness, and quality seem to enjoy an equal status.
As in the Mata Atlantica Salad consisting of a leafy bundle featuring seasonal greens, shavings of mango, creamy white pupunha heart of palm, the pulp of passion fruit, zingy celery, Brazilian herbs, all drizzled with smoked vegetable oil. If you wonder if a salad can be at the same time light in weight but also abundant with complex flavours, then stop here and dive your fork into this natural wonder on the plate.
One of the staples on the menu is the Jabuticaba cold soup (gazpacho) with cachaca steamed crayfish, pickled cauliflower and amburana nuts. Refreshing and surprising cold appetiser that will introduce you a number of important Brazilian natural delights. Jabuticaba is a grape-like purple fruit of Jabuticaba tree growing around São Paulo. The fruit is a thick-skinned berry with tart skin, but a sweet white or pink flesh. Cachaca is the most popular liquor in Brazil. Amburana nuts are seeds of Amburana cearensis tree used in traditional medicine as antispasmodic, with anti-inflammatory effect and suppressing cough. This soup turns out to be a highly nutritious and healthy restaurant treat. I would have a pot of it and not just a bowl.
The Egg “perfecto” cooked to 63 degrees during two and half hours served with pupunha foam is another pick from the signature starters at Mani. 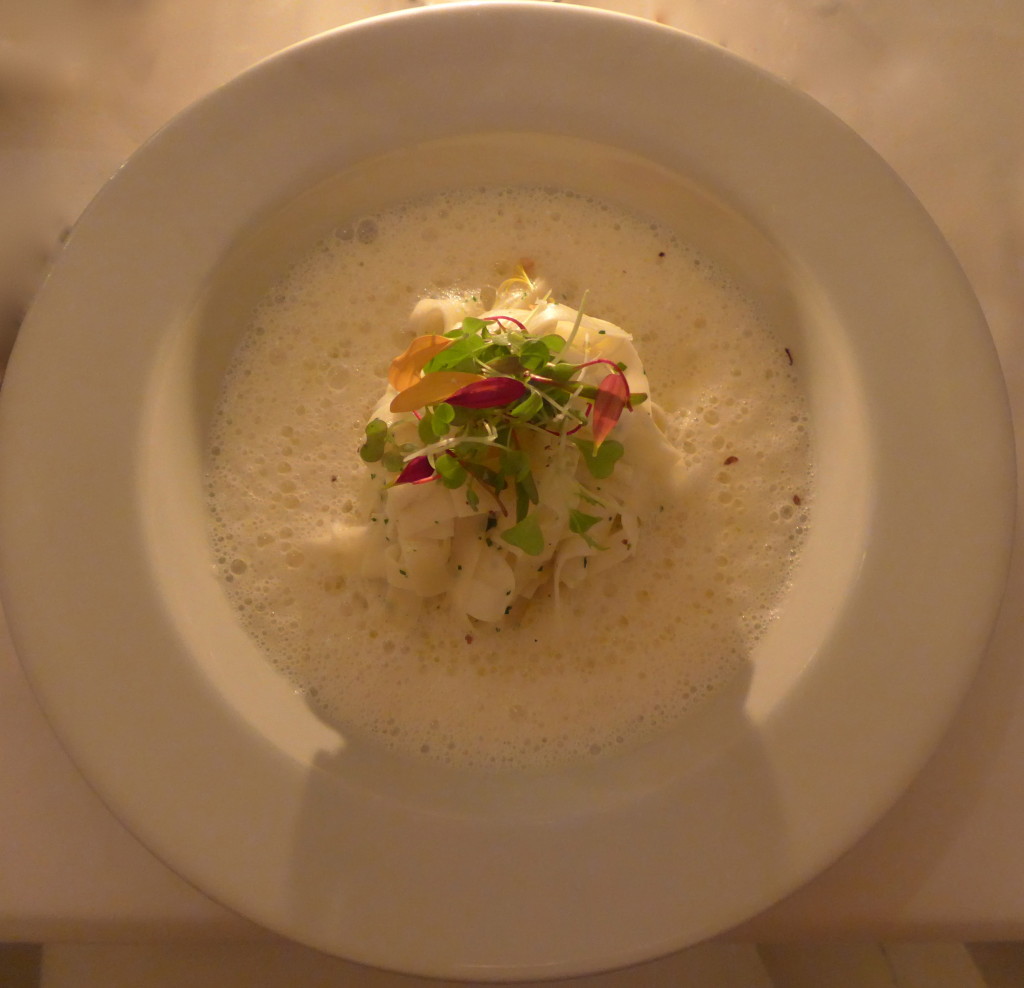 Yet it is the incredible Pupunha Heart of Palm thin noodles with parmesan sauce and white truffle olive oil that turned me on the most. Imagine flour-less linguine tasting better than the heavy gluten pasta. The versatility of the popular heart of palm is being intensely explored across Brazil. The chefs shave the flexible inner layers of the palm in long strokes in the shape of long linguine. The air-light fragrant foamy sauce and truffles foul your senses as to believe that you are actually eating the naughty carb and cholesterol-rich plate. But, you are not.
The chefs also make tortellini from the heart of palm.
There are plenty of fish dishes, all vary according to availability, summed up as a daily catch. Lamb, beef and pork, are originally prepared with local cheese or nuts (such as baru of a savannah tree) and of course plenty of South American fruits and vegetables. 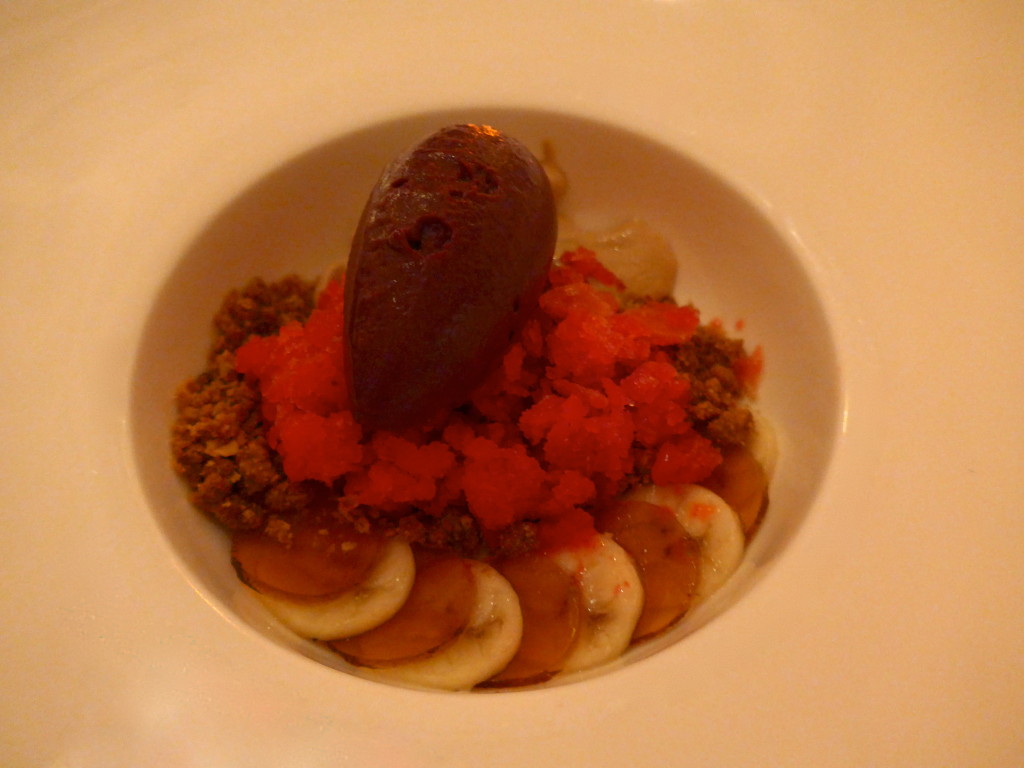 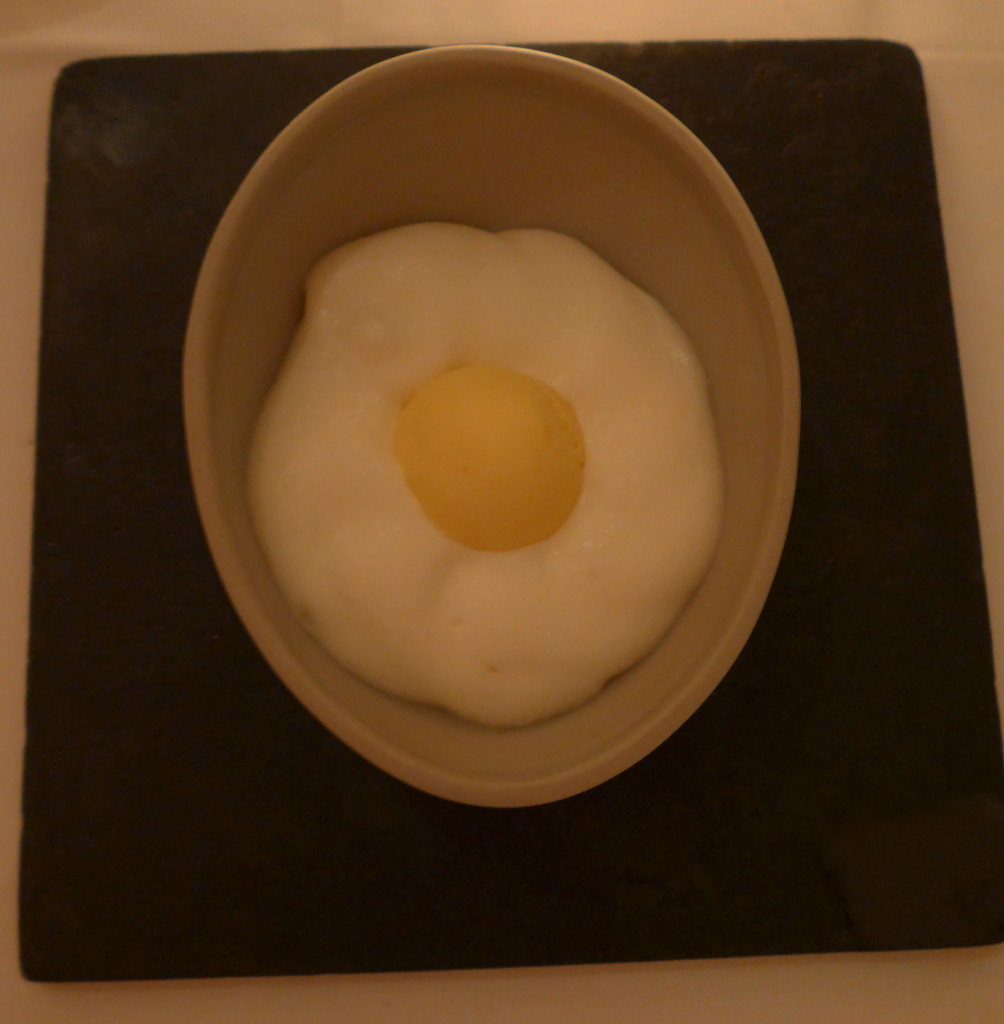 Most of the desserts on the menu contained some form of a frozen sorbet or ice cream when I visited.
The final treat of Açaí ice cream, banana, guarana jelly, oatmeal, brown sugar, marshmallow and strawberry slud sounds more like the popular Brazilian breakfast spreading across its borders as ‘açaí  bowl’ (I saw it in California as well as in New York), yet aside its energy-boosting property it was far more sophisticated. Similar to the açaí  bowl, the purple in antioxidants-rich sorbet was accompanied by banana, sweated with guarana and fibre boosted by crunchy oatmeal. The marshmallow and strawberry frosty layer added the extra zing.
The Egg Dessert of eggnog ice cream with coconut foam and coconut crisps looks quite funny, like another breakfast and not after dinner treat. It just looks like an egg, though. The yolky and glaring centre is a lush eggnog ice cream while the white lining is creamy coconut foam. I like the sense of humour and surprising effect of their dishes that also taste great.
Drinks: The wine list is just right. Not too big, not too limited. We went for a beautiful bottle of Sold de Sol Chardonnay, often regarded as one of the best chardonnays in South America. It was mineral yet firm and rounded nicely with a sweet vanilla and spicy tones. The drinks list does not end with wine as many cocktails, teas, non-alcoholic blends and of course high-quality Brazilian coffee adorn the liquid stable of Mani. 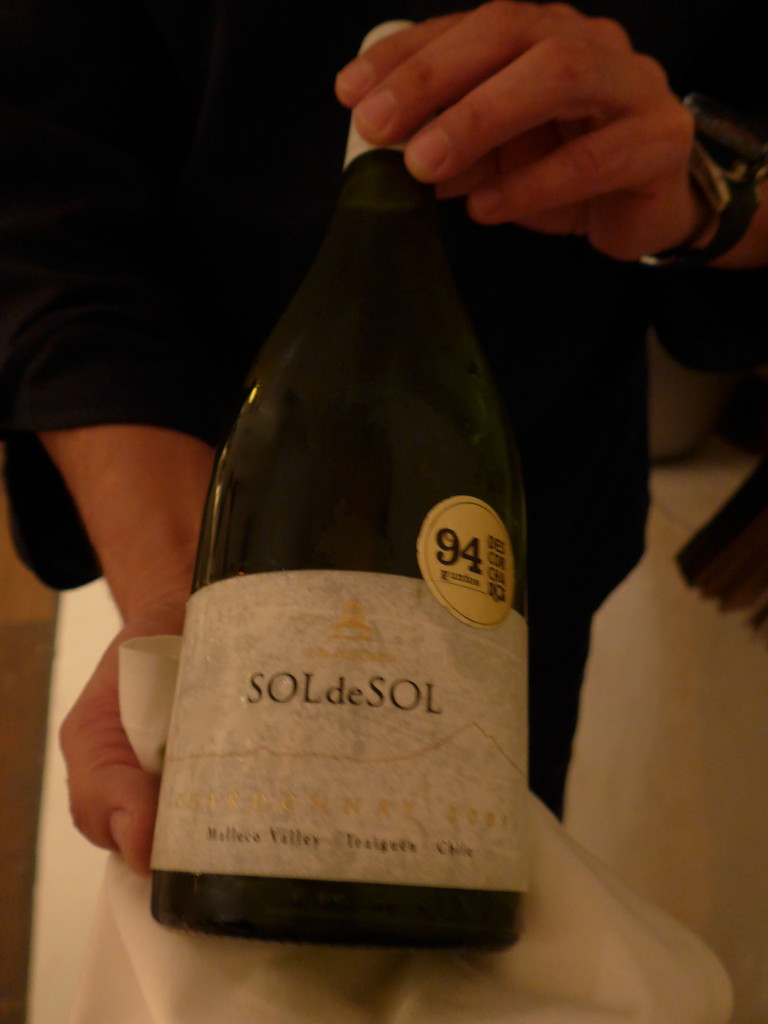 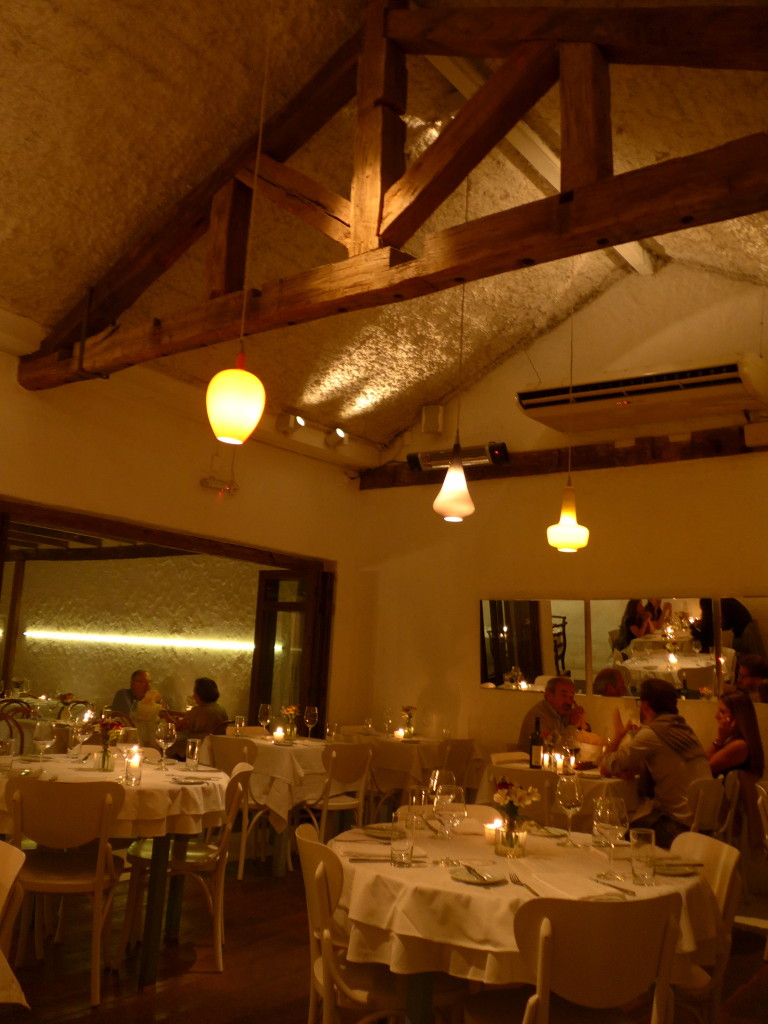 Atmosphere: Elegant yet casual, natural yet celebrating modern design. It cannot be more eclectic as there is also an al fresco terrace at the back.
Entering through the long entrance corridor, your sight is entertained with art installations of upcoming artists that welcome those who browse in. The restaurant itself is spread across several rooms, each with a slightly different feel. One is more rustic, other more minimalist and  contemporary. A plenty of natural light sets an eco-friendly tone.
Since 2013 Maní was placed between the 50 best restaurants in the world of the British publication Restaurant Magazine. Personally, I appreciate the delicate and light of Maní’s cooking style over the lofty and heavy DOM by the chef Alex Atala.