As with the omnipresent juice bars in the previous decade, at least as numerous as the Starbucks coffee joints, now the world is being splashed with a fun new drink – bubble tea. It is not a fizzy version of tea as its title may suggest, but a tea beverage with added chewy tapioca balls that often sink to the bottom of the glass or a plastic cup into which it is poured. 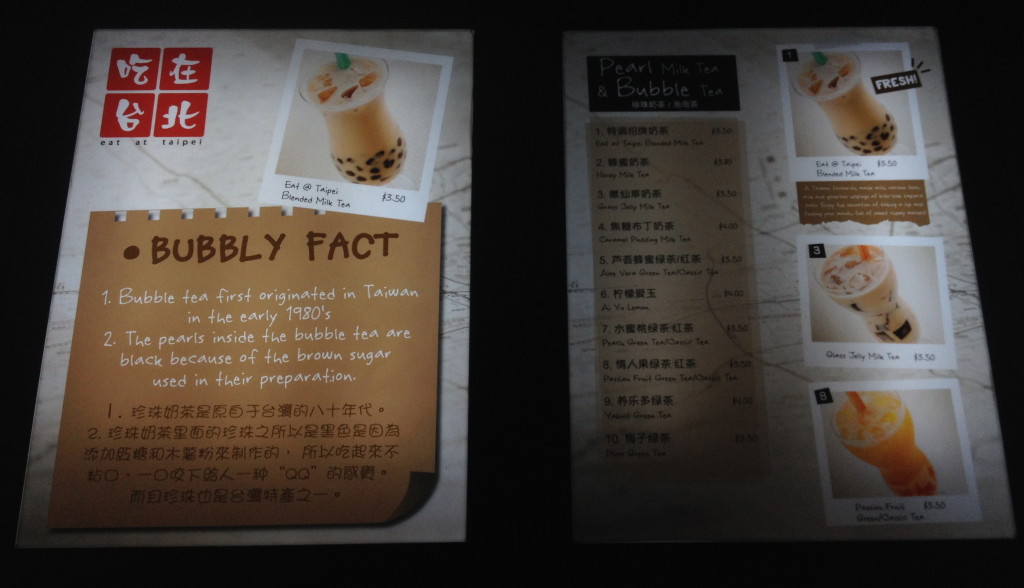 Served with our without milk, with sugar levels adjustable to meet consumer needs, chunks of various fruits or a splash of japanese probiotic milk product called yakult, the Taiwanese bubble tea became a refreshing entertainment not just for kids but also for many open-minded adults. Particularly for those, who visited Asia and fell for the fun and diverse flavours of  this drink.
Also known as ‘boba’ or ‘pearl’ milk tea, this Taiwanese tea-based drink was invented in the 1980s in tea shops in Taichung, Taiwan. 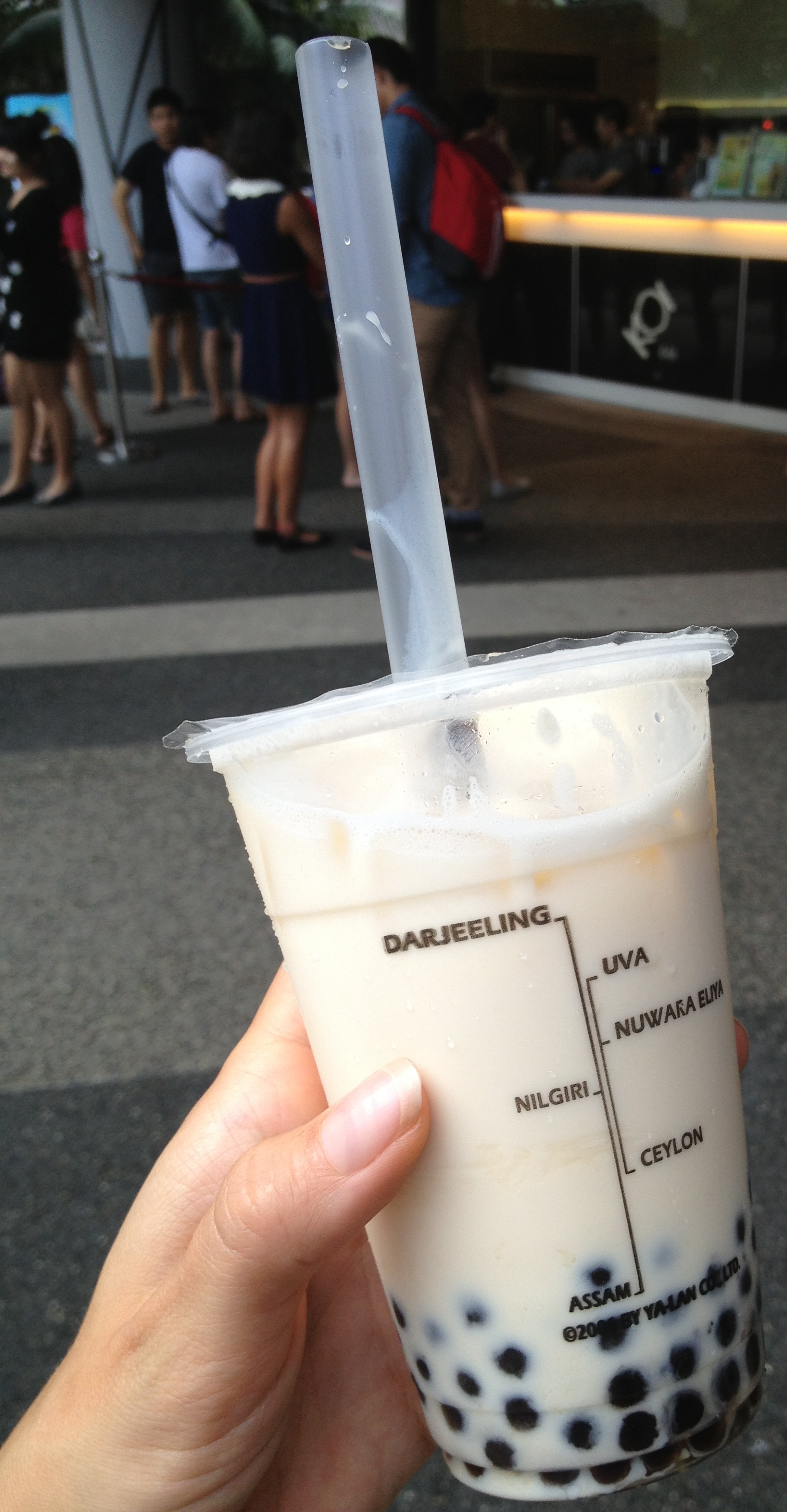 The term ‘bubble’ is derived from the Chinese bōbà (波霸) – meaning literally “large breasts”. It is indeed a revealingly vivid term for the large, tapioca starch-based, black coloured chewy balls put into the brew (I would assume that it was a man who came with the term).
These bubbles are also called ‘pearls’ (珍珠, zhēnzhū), when their volume is smaller than that of the standard balls. 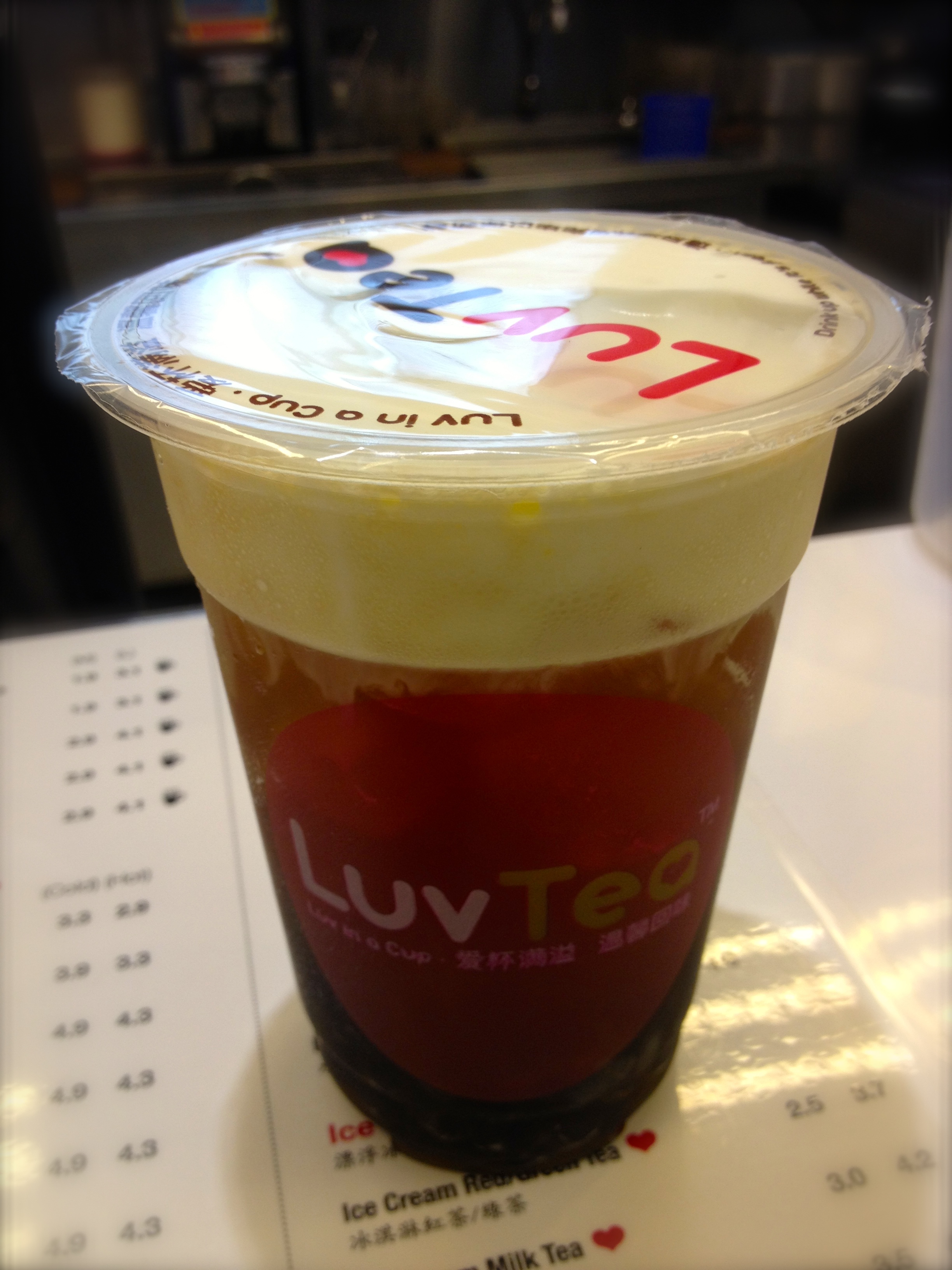 Where you can get it

In the new millennium, the iced or hot tea drinks have started gushing all over the world like a bubbling lava flushing from the throat of a volcano. From Taiwan, it flew to China, Japan, Singapore, Thailand and recently even to the trend spotting California, New York as well as to the more than ever receptive Europe (London, Paris, Prague, Nice, … I could find it at the most unexpected locations – basically wherever there is a substantial Asian population). 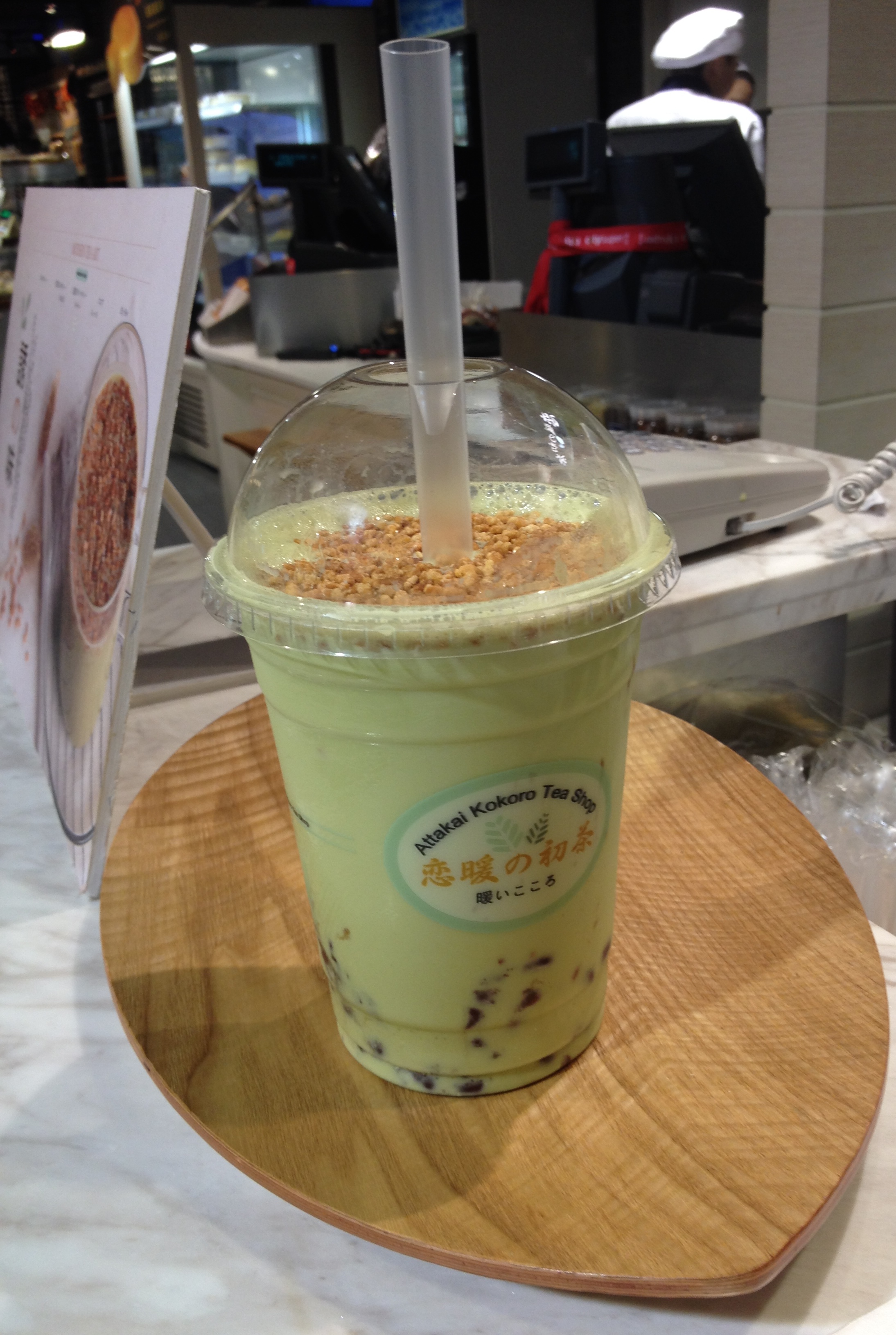 What is in it – common ingredients

With the bubble tea mania contagiously spreading around the globe, there are endless flavours, combinations and ingredients. Almost each newly affected tea addict contributes to the bubble tea’s encyclopaedia with a new twist. From a salted cream topping, through cooked adzuki beans, coconut jelly, local fruit (such as plum), sweet probiotic beverage (‘yakult’) bringing more flavour or a health benefit.
The above pictured Matcha bubble tea is rich in antioxidants, but its wafer topping and full fat milk makes it more like a calories-dense dessert than a refreshing drink. The added grass jelly is good for your bones though. 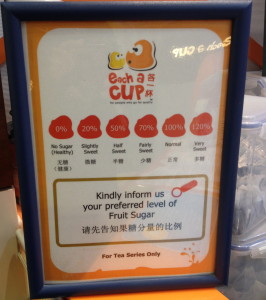 Ice-blended versions are usually mixed with fruit or syrup, resulting in a slushy, smoothie-like consistency. Sugar can be very high in these drinks, but many places let you choose from 90 through 0 level of added sugar in your drink making it more healthful. 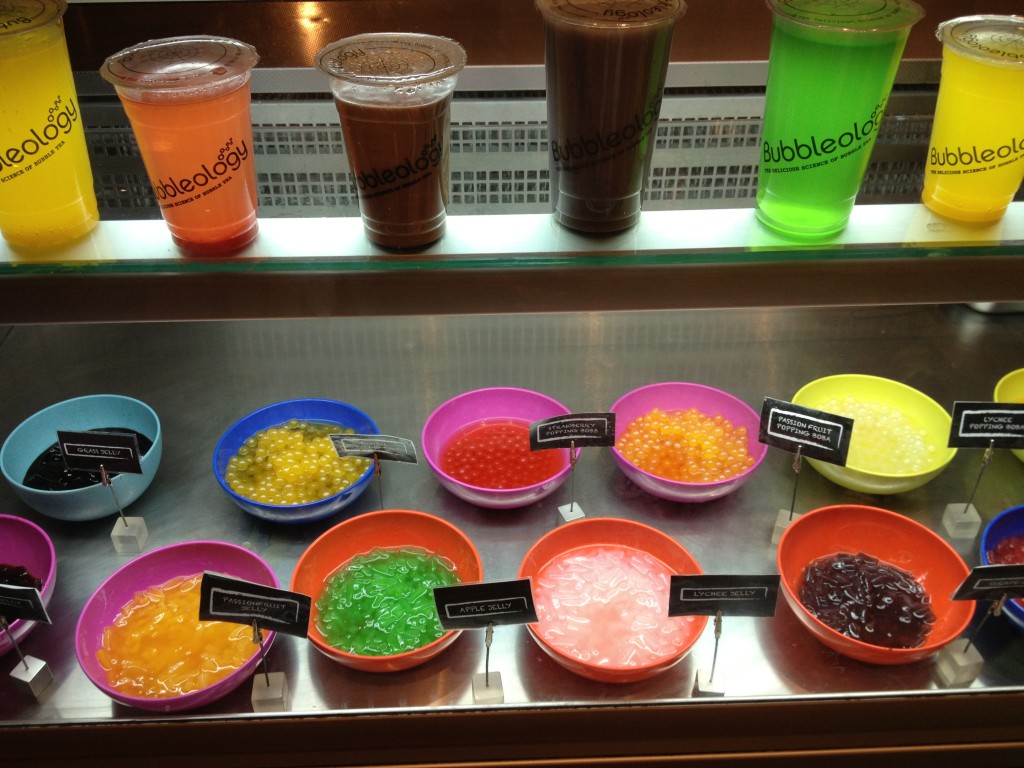 In place of the tapioca balls, consisting mainly from a palm derived starch, a wide range of other colourful or weirdly shaped ingredients are used to add a surprising bite (texture) to the drink. Some are natural, others less so.
For example green pearls have a small hint of green tea or apple flavor, and are chewier than the traditional tapioca balls. 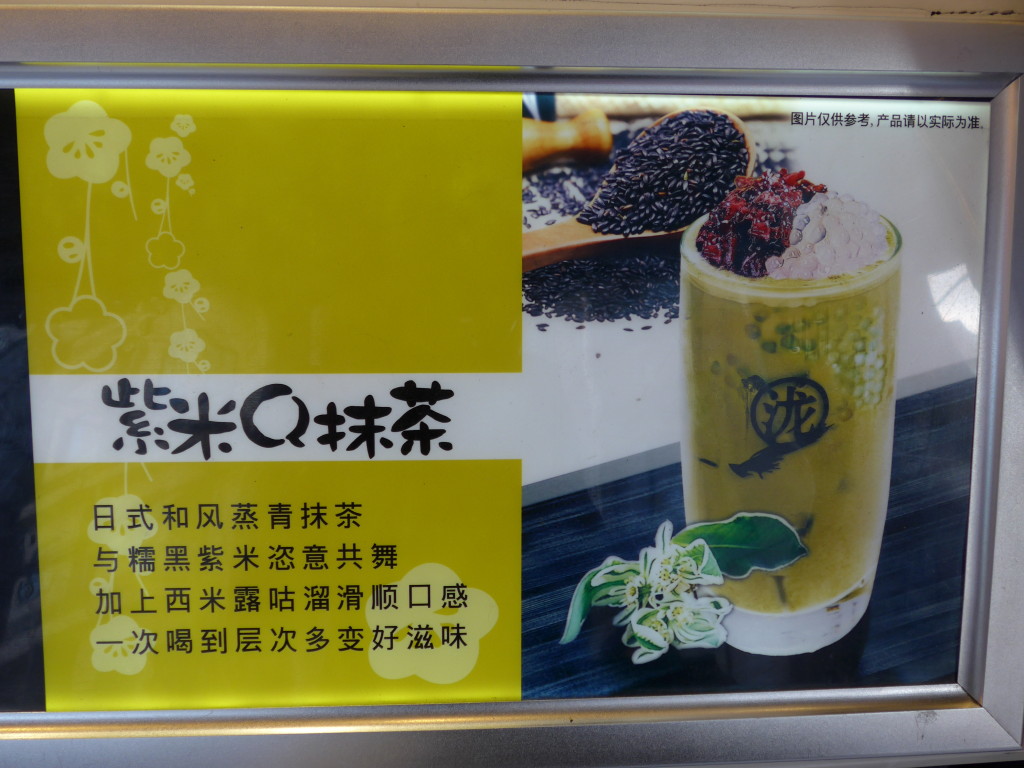 A jelly with slightly crispy texture is also used in small cubes, stars, or noodle-like strips, with flavors such as coconut, konjac, lychee, mango often available at some shops. Adzuki beans or a paste from them are also typical toppings for Taiwanese shaved ice desserts,
A more healthy aloe (your skin will glow and your stomach be soothed) or a tasty calcium-rich egg pudding (custard pudding), carb-rich sago pearls (when cooked they have a spongy texture, sago is extracted from palms or cycad family plants), and taro (purple potatoes) balls. 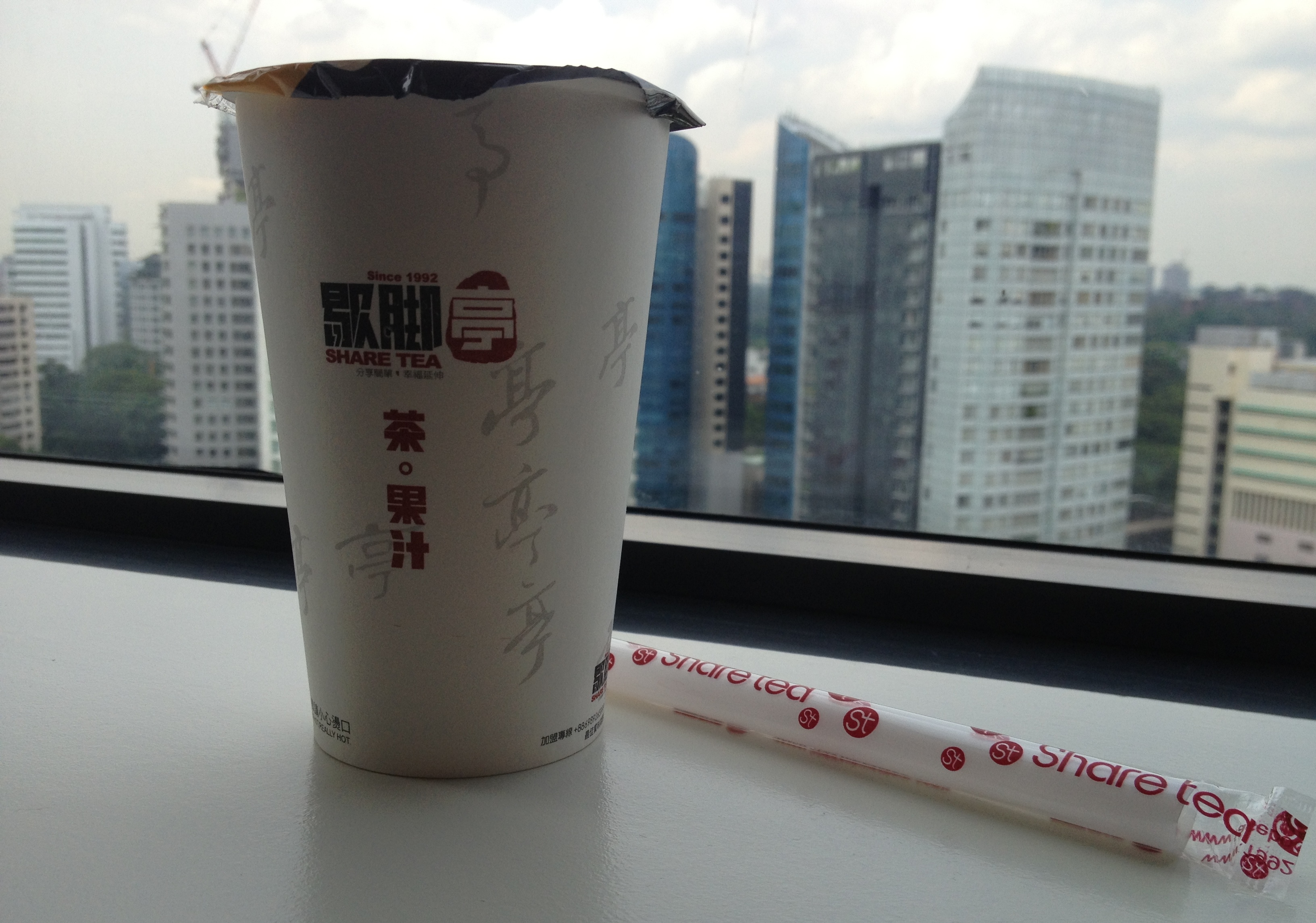 Warm bubble tea is less common today, but its goes back to its origins since the oldest known bubble tea consisted of a mixture of hot black tea, small tapioca pearls, condensed milk, and syrup or honey. Share Tea in Singapore makes a very yummy version of it, but as they told me: “Pearls [bubbles] are not commonly added to hot bubble tea today.” Beans are more often a good option making it nutritious almost liquid breakfast. 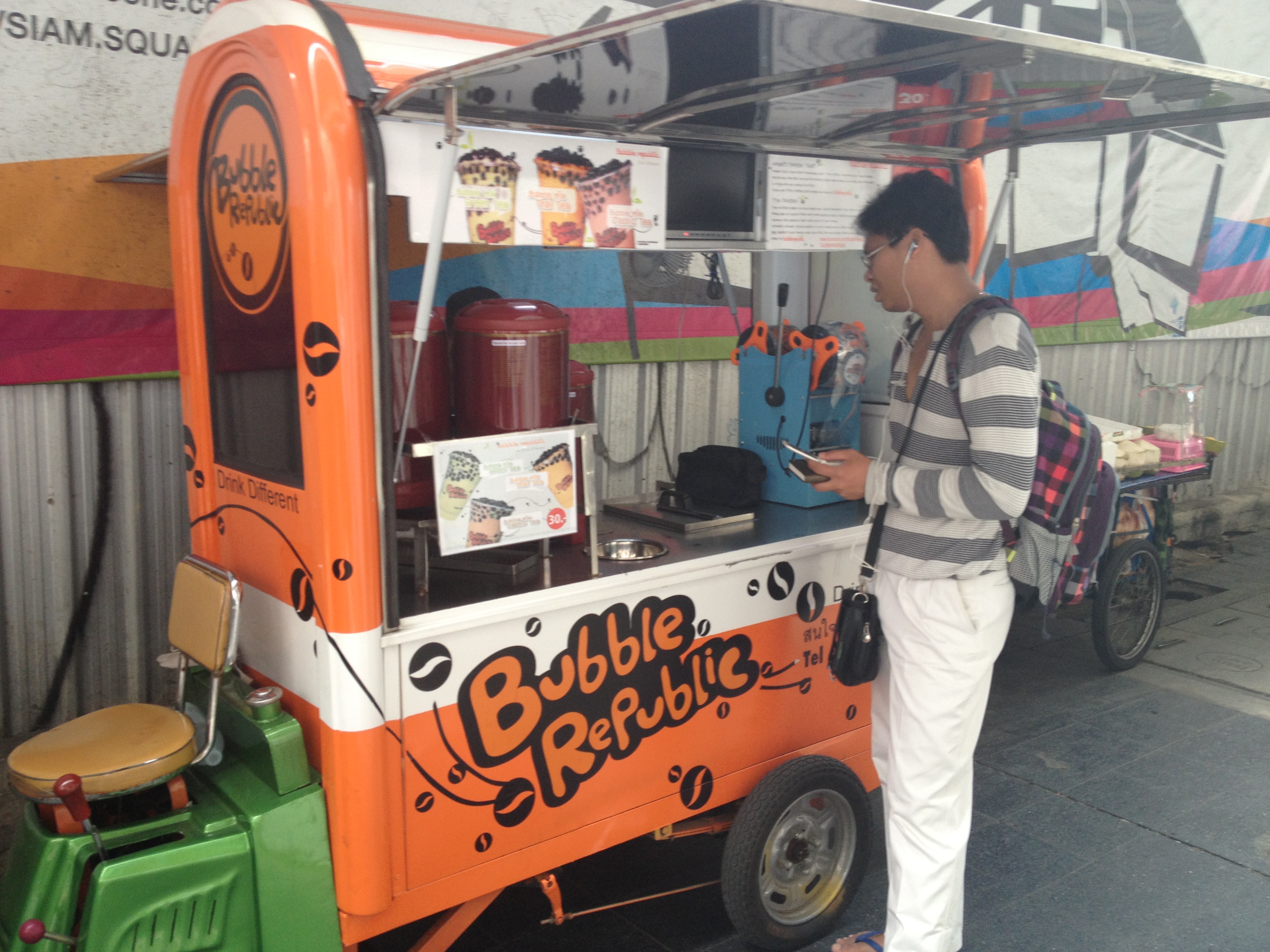 Ultimately it is a street drink to be taken away. The Bubble Republic street vending car in Bangkok is an economic tea sales point. Like the local tuk-tuk three wheelers with their small noisy engines ramble through the city and stop where the driver senses potential clients.
Some are more high-tech like Each a Cup in Singapore. Located mainly in modern shopping malls or at business buildings, many are equipped with large screens highlighting the favourites and interviews with local celebrities relishing their beloved cup of bubble tea. They are also informative guiding to healthier alternatives to tapioca starch such as Nata de coco that is “high in dietary fiber and low in cholesterol and fat.” The nata de coco is sliced into thin strips to make it easier to pass through a straw. Each a Cup also prides itself in using real tea bags rather than fake tea powder like many of its competitors do. 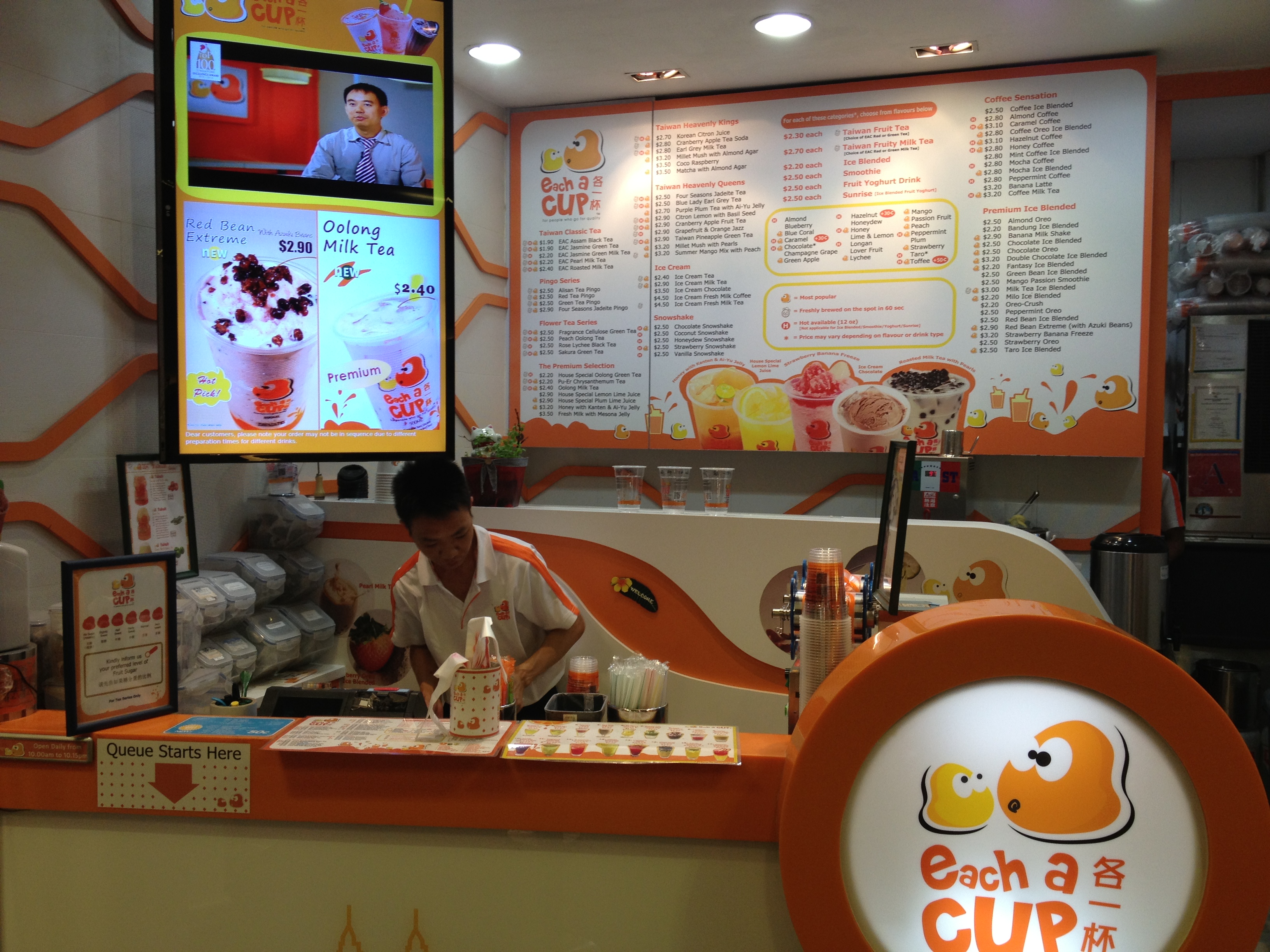 The taste and texture differs tremendously. Firm, evenly shaped tapioca balls are considered ideal. Koi in Singapore is widely considered by the locals to make them in top shape and texture.
Qualitatively speaking, the best bubble tea is made from real tea brewed freshly on the premises. Fresh milk can be added, although in some warmer climates powder milk is more hygienic. In the current natural food hype, cautiousness towards chemical additives is on a high alert for the bubble tea consumers. In May 2011, a food scandal broke out in Taiwan where DEHP (banned chemical plasticiser and potential carcinogen used to make plastic) was found as a stabilizer in drinks and juice syrups. 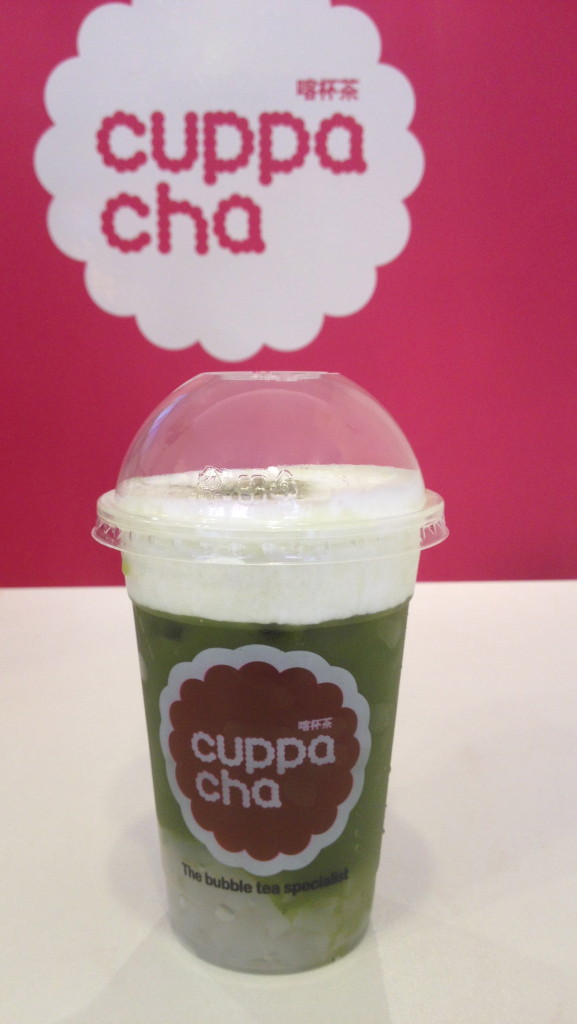 In London Cuppa Cha makes high quality real bubble tea, to my taste much better than the lab-like Bubbleology and many of the cheap tea  joints in the London’s Chinatown.
My personal favourite from is the salted cream top tea (Gong-cha in Singapore and Hong Kong makes it the creamiest). I like it in all – black, red, oolong or green tea versions. Generally it is served without the bubbles with ice, yet it is still part of the bubble tea family. Its thick creamy cap satisfies enough ones cravings. 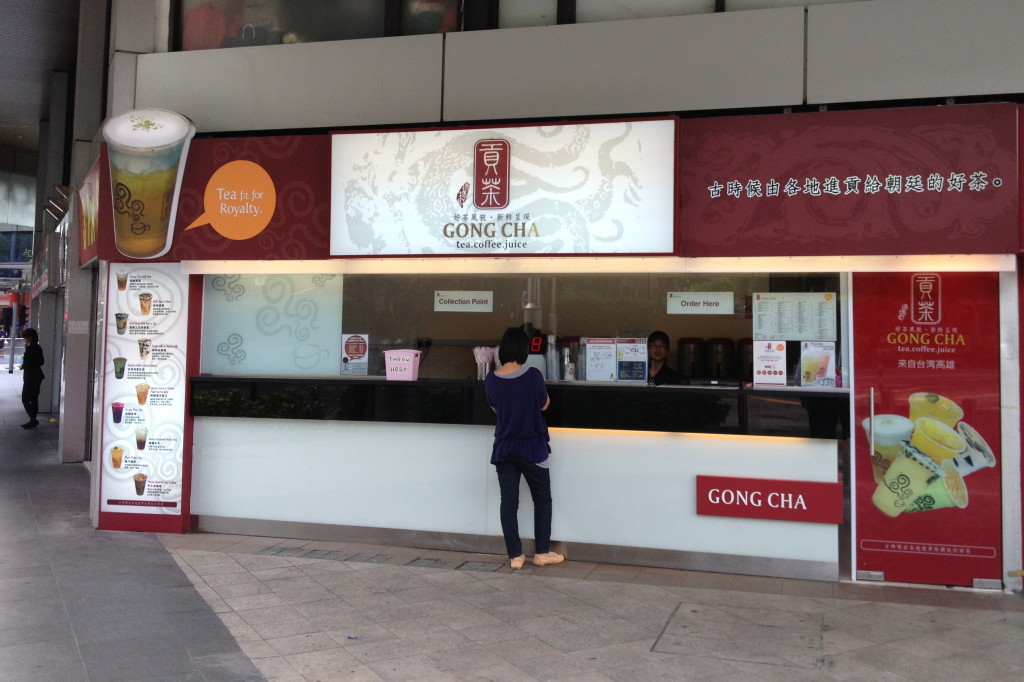 Another version of it is “foam milk tea” that is shaken before serving forming a frothy layer on the surface, but it should not be mistaken for the cream top tea, but is less heavy.
There are so many flavour-stirring options that can make your cup of tea the perfectly fitted custom-made drink you will love the most. Try as many as possible and find these that match best your taste and health preferences. I must admit, I am addicted, and now must run to my nearest bubble tea joint! 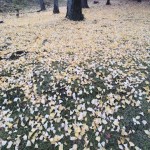 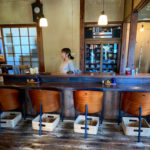 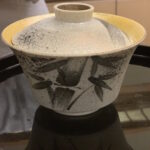 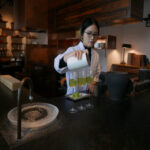