The breathtaking panoramic views from the gastronomic restaurant Golden Well make it the most romantic place to dine in Prague. In particular during the summer when guests can sit at its open-air Terrace, which with the Prague Castle carving its spine, surrounded by the castle’s rose gardens and a vista worth 1000s of photographs are not unique in Prague, but its cuisine is outstanding. And that is hard to beat. 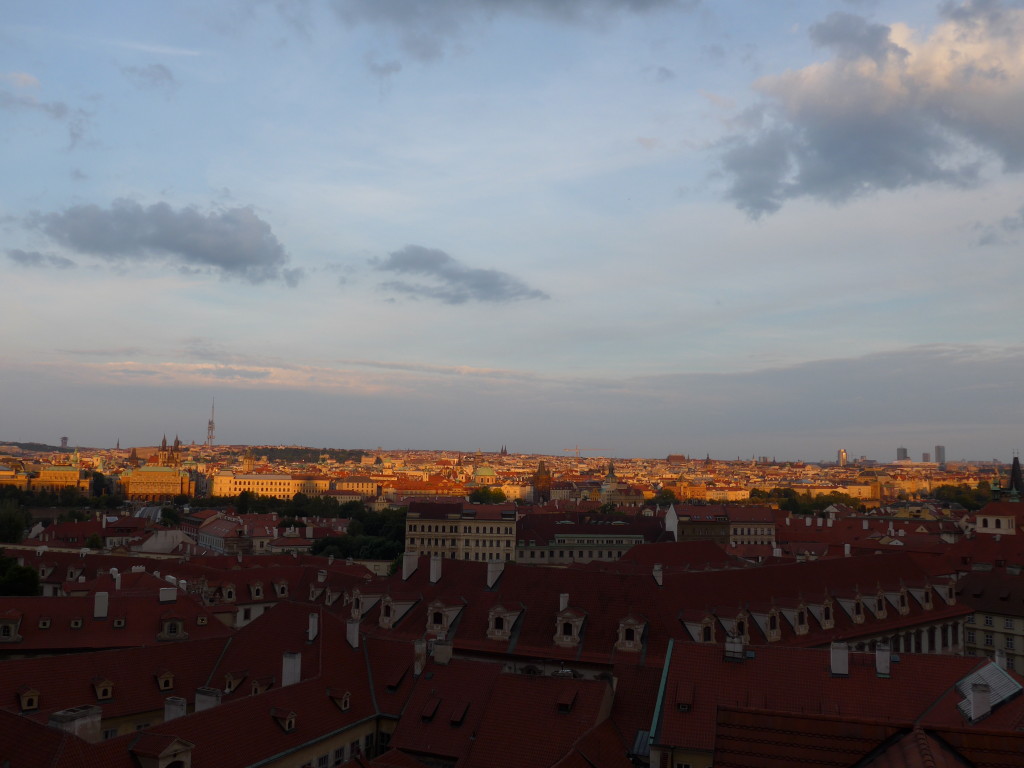 Located atop a boutique hotel of the same name, this is a complete lovers’ and honeymooners’ paradise. During the summer days, the guests can sneak into the private rose gardens of the Castle through a small gate as if they were the king himself.
Each time I dine at this wonderful place, tucked away from the city besieged by tourists, and perched up on the hill just older the Prague Castle, I am taken aback by the postcard colours before the sun sets beyond the hundred spires of the Prague’s horizon. As in a retro film, the hues of the roofs, the façades and the domes of the churches turn into a surreal puzzle of fading colours. 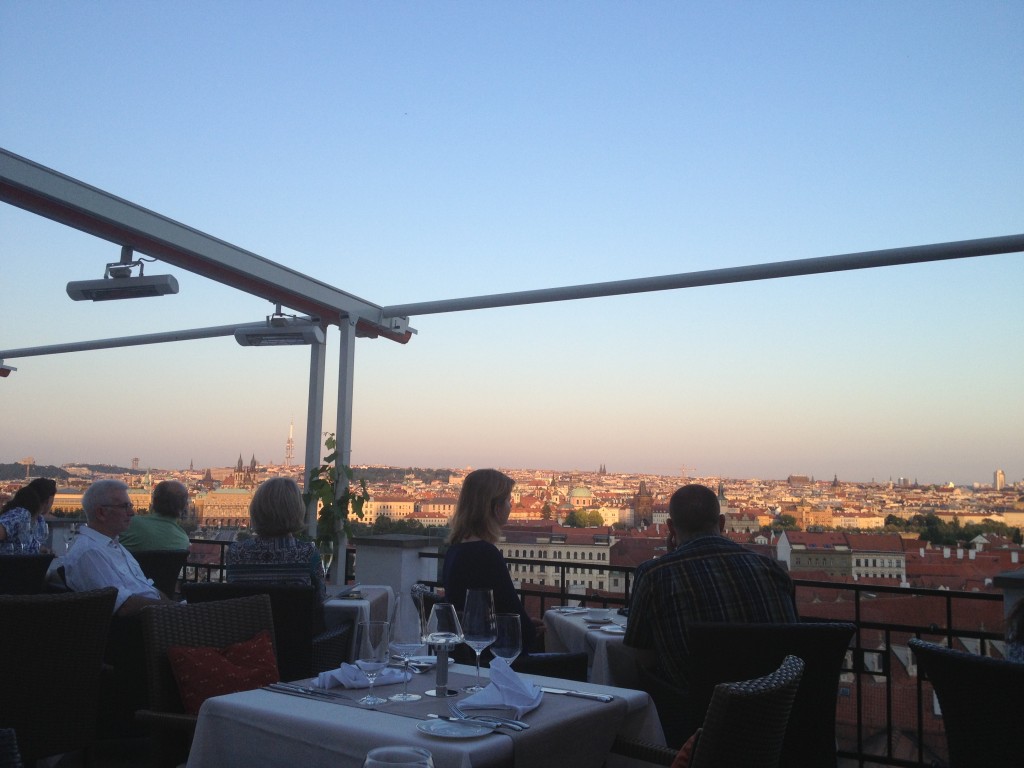 The history of the building can be traced back over 500 years, but it was in 2008, when an extensive reconstruction with the help of Italian designers gave birth to the luxurious interior of the main restaurant. The cosy soft leather-covered chairs are comfortable and the room has a warm feel ideal for the cold months of the year. The terrace has authentic garden touch with its more modest naturally-colored decor, plants winding up around the steel support, and sturdy rattan chairs. 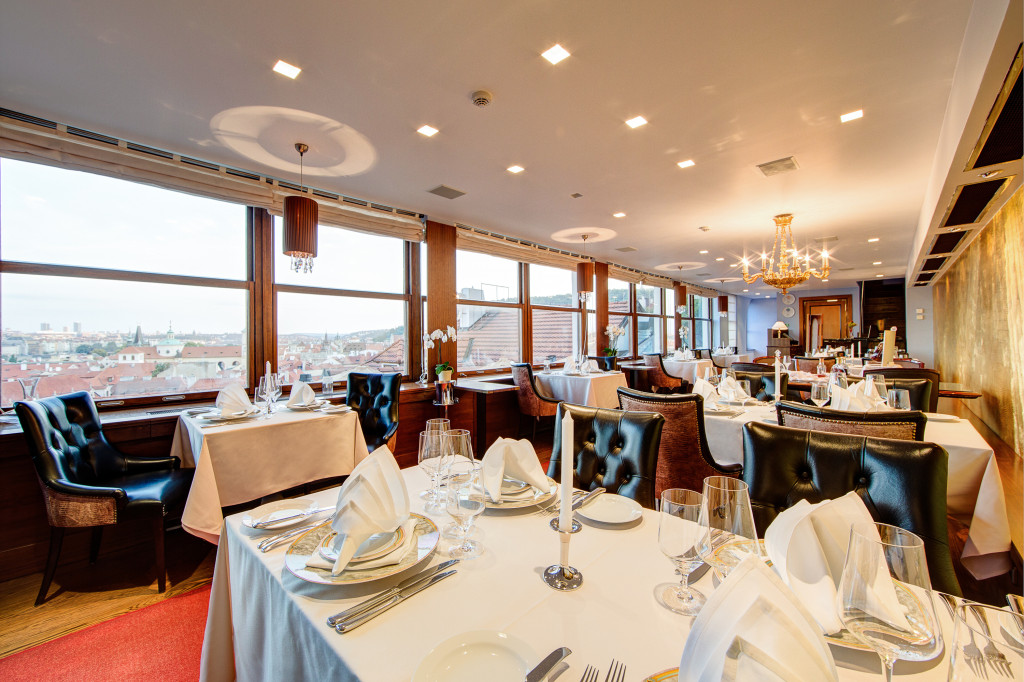 An award-winning chef Pavel Sapik creates modern gastronomic dishes with French and Czech flare. As a member of the Czech national culinary team he won gold at the Culinary Arts World Competition in 2005 and was voted the Chef of the Year in the Czech Republic just before he moved to work at the Golden Well, where his culinary talent shines. Born in the wine-growing land of the fertile South Moravia near the border with Austria, his family roots have been deeply grounded in the culinary Earth for generations. You can savour the fruits of his work in the eight-course degustation menu, that can be paired with wines by the talented sommelier. 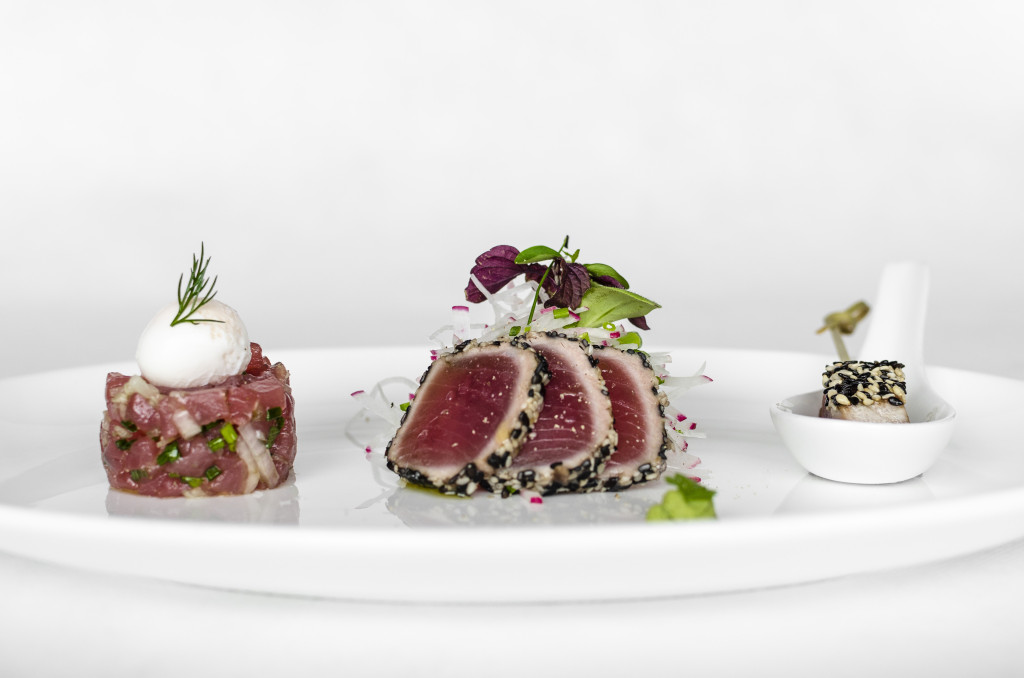 His modern approach to Czech and continental dishes often leads to lighter, yet tasty and original versions of the classics, but also to absolutely new plates that you have never tried anywhere else.
For summer the lightly spicy Thai-themed soup with shrimps and vegetables was a prefect refreshment, while the Trio of Tuna was not shy of showcasing the possibilities of this Mediterranean fish. Served raw in a tartare with onions, chive and a dollop of creme fraiche with dill, semi-cooked to perfection with colourful sesame crust and seared while remaining tenderness, it showed that the chef works with top quality ingredients. Even in Prague, far from the sea shores, you can get superbly fresh fish (the frequent flights do not take long). 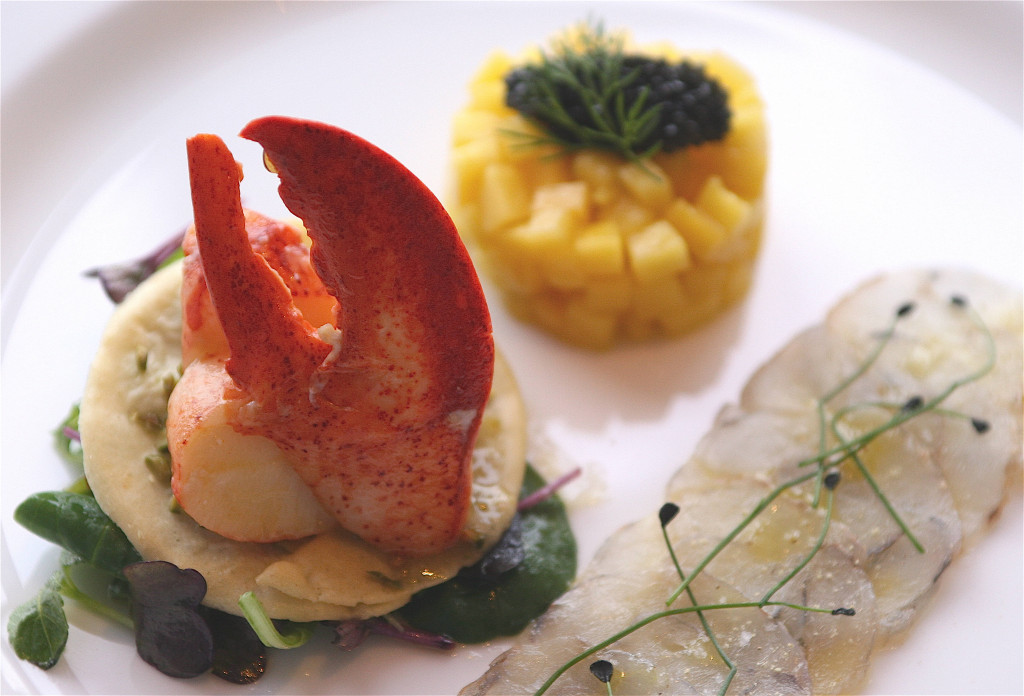 Seafood is also of the highest standard. The lobster from Canada was juicy, tender and served as a carpaccio on one side and a cooked claw on a bed of crisp vegetables, with a luxurious highlight of black caviar. The scallops were always succulent, soft like a feather pillow, but rich thanks to their crisp seared face and tail. Served with a fatty chorizo even more richness was added to this otherwise quite light seafood.
The amuse-bouche always pleasantly surprise. One day it can be based on meat pate, other of fish, but usually it is a mini-version of the chef’s complex thinking about food.
The steak has been always amazing and consistent. The meat is sourced mainly from the Americas, and the cooking technique again highlights its qualities while adding a whiff of high-cuisine.
Cheese and deserts are mainly inspired by France and there are only French cheeses on the menu, but we always ask for Czech cheeses and they often find some interesting variations for us. Home-made sorbets are the pastry chef’s pride, while the typical Czech sweet treat of Povidlove Tasky, which can be described as plum jam ravioli served with crushed nuts, warm butter and home-made brandy ice-cream, brings some to their childhood while introduces others softly into the generous Czech cuisine. In-house Chocolate Pralines can be also taken home. 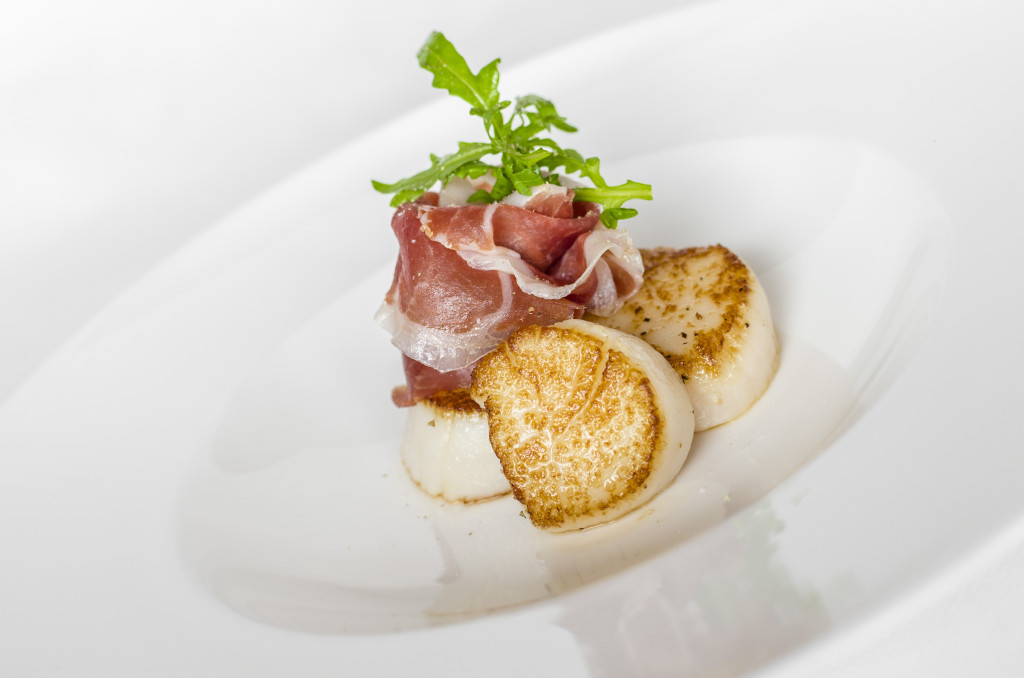 The bar downstairs welcomes you with a sparkly crystal jeroboam of the world’s most luxurious cognac Remy Martin – Louis XIII, made in limited 100-piece release. There are only 40 restaurants in the world that are allowed to serve this rarity and the personnel had to undergo a specific training in order to be able to serve this gem of the French liquors. 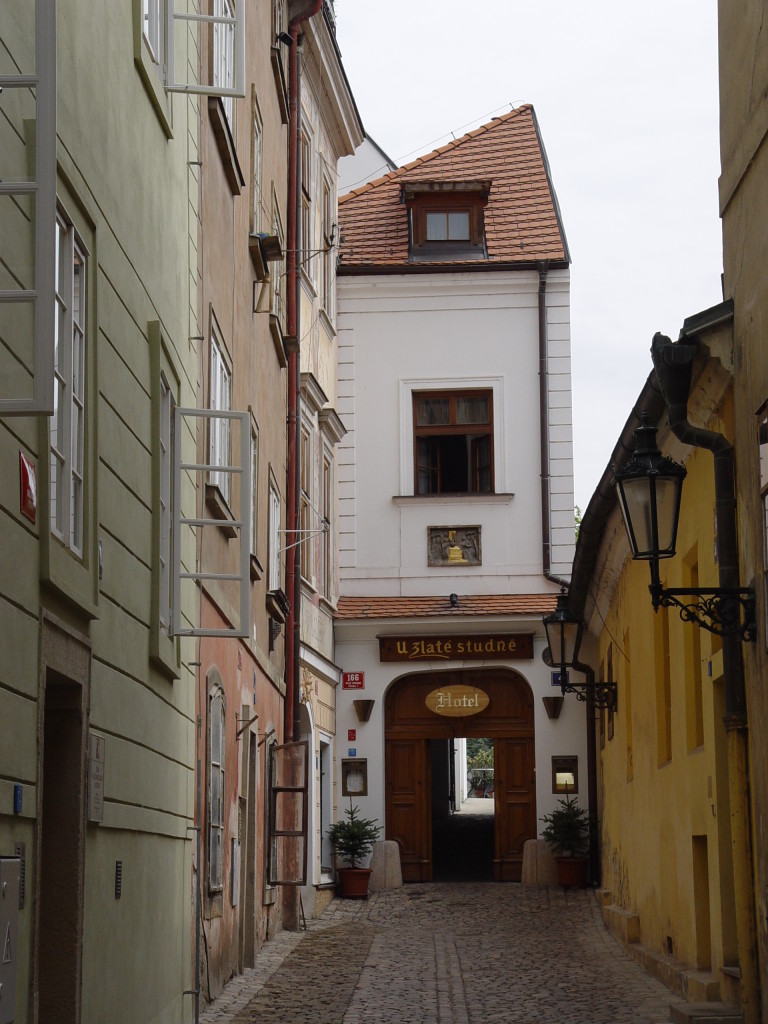 The wine list has a good breath. From the great Czech produce I can recommend the white beauties such as complex and generous Velké Dobré Bílé, barrique “Reserva” from Dobrá Vinice (literally translated as “Good Winery”), and the indigenous Czech varietal Pálava from Gotberg, that is more aromatic and tends to lend the wine candied apricot flavours. From the reds, the Grand Cuveé André, late harvest aged in barrique by Šlechtitelská Stanice Velké Pavlovice, that gave birth to this aromatic cross of Zweigelt and Blaufrankisch, and Skale Family Reserve – aged in barrique by Pavel Springer, this wine shows that great wines with ageing potential can be made in the country. Top chateaux from France, Italy, Spain but also New World producers are featured in new but also older vintages.
Although Prague is for global standards a small city, its panorama feels like an endless sea of colourful buildings. It can be enjoyed from its hills, but connecting it with gastronomic pleasure, the experience becomes truly unforgettable.
Contact: +(420) 257 011 213
Address: The Golden Well Hotel, U Zlaté studně 166/4; Prague 1.
Beware of the restaurant’s hidden location in a cul-de-sac cobbled street behind the Czech Parliament. If you see the British Embassy, turn back and take the latter road, further from the Malostranske Namesti.