JAN is one of the most exciting restaurants on the Riviera right now. Partly it might be so because it is not entirely French but has an alluring South African influence. The chef Jan Hendrik van der Westhuizen is from SA and his roots are the source of inspiration in the form of re-worked family recipes as they intermingle with his love affair with France. He confesses in his cookery book “The French Affair – tables of love” that its culture of good food, fresh produce from local markets and the meals were and are the inspiration for his recipes. Hendrik’s unusual background as a gourmet chef invites to his new restaurant to taste the life’s memories – from a farm in SA through Paris, Champagne to Côte d’Azur. 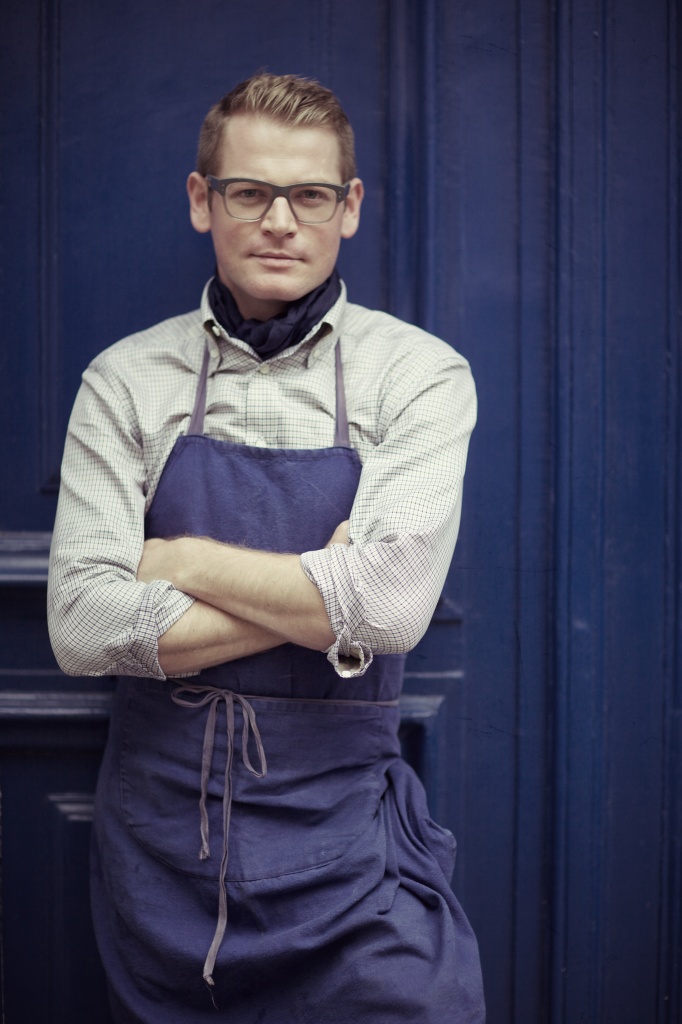 After a cooking stint in Captown, he moved to Paris to work at Elle’s headquarters contributing to its food magazine, later transferring to Champagne as an Executive chef for the Champagne house PIAFF, and as South was calling back, he cooked on a private yacht cruising the fishing villages of Southern France. Next was the boldest step yet – opening of JAN, his own restaurant in Nice. 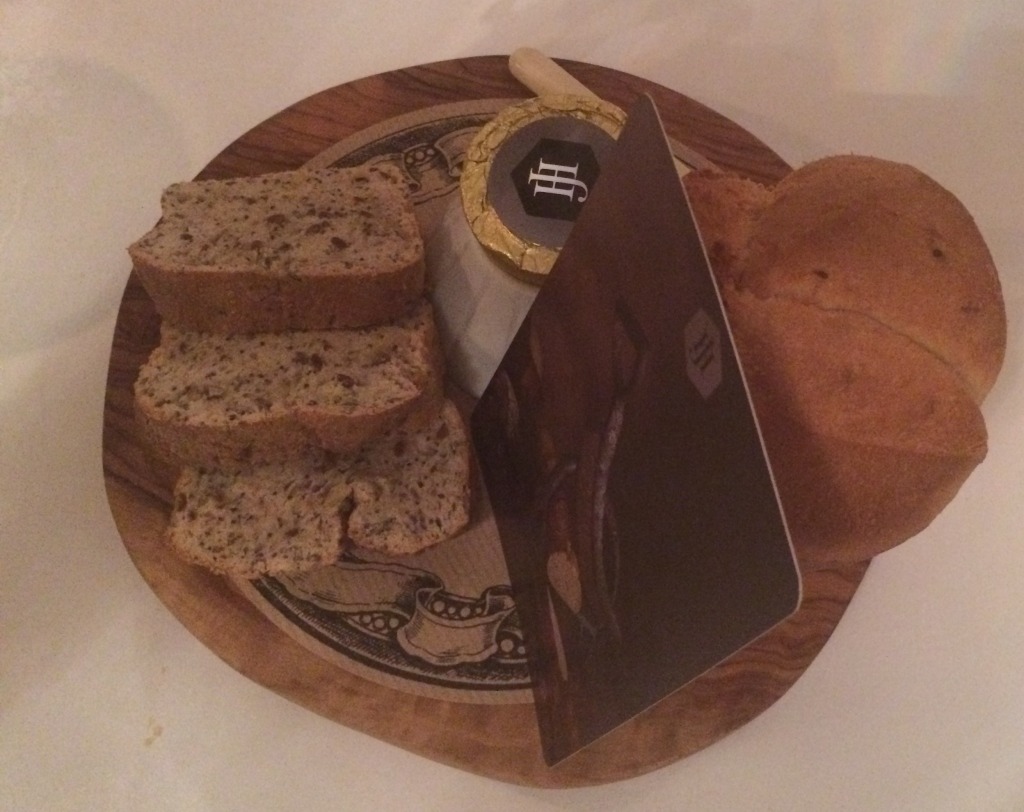 The chef realises that everything counts. Not just the dishes you order, but also the little extras that a typical gastronomic restaurant treats you with such as a mouse-bouche or a selection of bread. Oh, the bread! If Jan was opened for breakfast, I would go there just for the wonderful loaf, a recipe of Jan’s mother. Served warm, as is customary in France, with butter and a postcard-like brief explaining the story behind each of the two breads and why he chose the French Echiré butter – my personal favourite too. The honey and seed loaf country bread is his mother recipe and the SA traditional “Mosbolletjies” from the Cape introduced there by the French Huguenots. Enough from me, go to Jan and try for yourself. 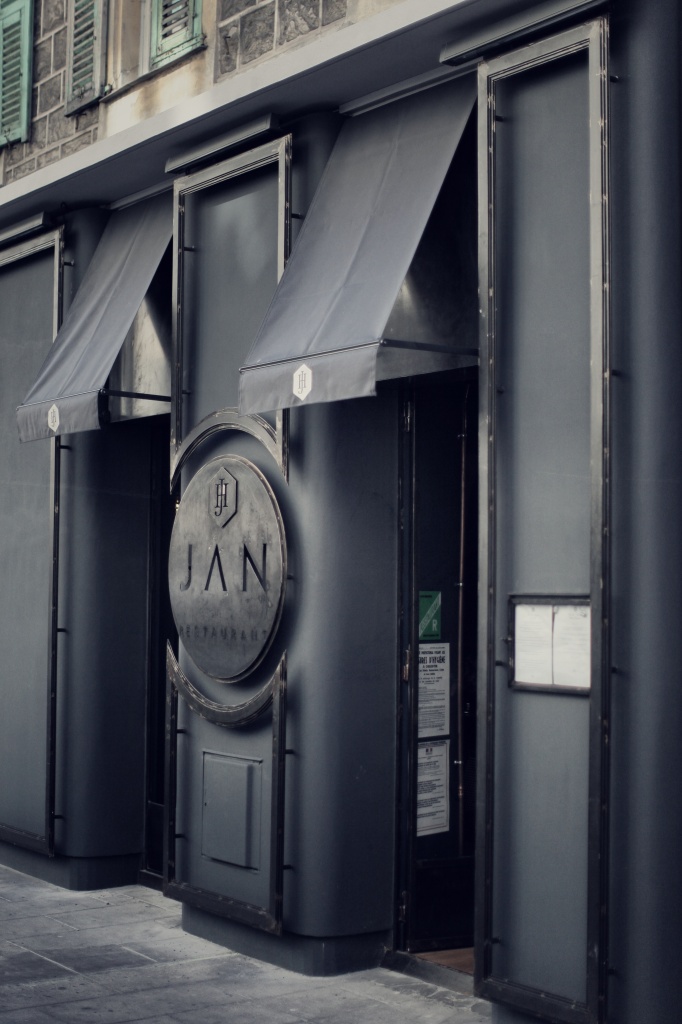 The food expresses his South African heritage and his love for his family. There is also a menu called “At my grandmother’s table” inspired by the chef’s ‘grand mère‘. Yet, being such a hot ticket in Nice now, we had to try his six-course tasting menu. I appreciated their flexibility, not common for a gastronomic restaurant, since I was not in the mood for a Pork terrine that was starting off the menu, I was allowed to have the Grilled Mediterranean Sardine with horseradish, potato, aÏoli and lemon instead. Intriguing was the combination with horseradish that added a bit of spicy creamy lift to the sardine’s typically fishy aroma. 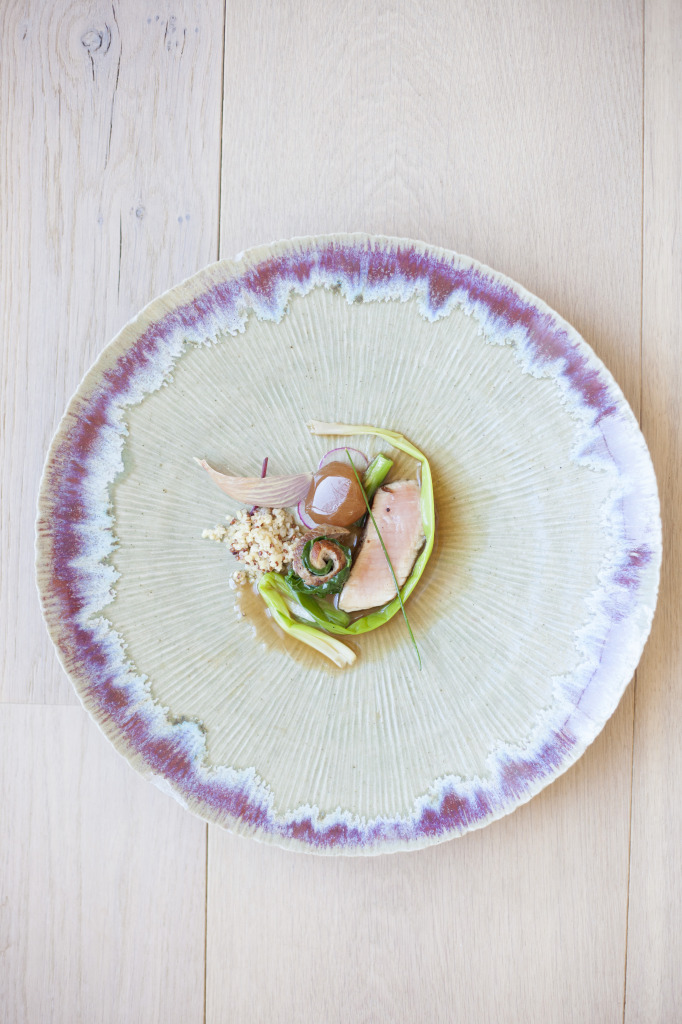 Followed by Crab salad, beetroot, burrata, tomatoes and pepper pearls, heirloom tomatoes and lavender mayonnaise, in which the last ingredient was surely influenced by the nearby Provençal meadows, I grasped his style – fresh, artistic, light and balanced.
Most dishes on the tasting menu are also on the regular carte such as the Cod, corn, cauliflower, parsnip, prickly pear with mushroom sauce. Autumn feel of this plate was   achieved with typical seasonal French produce.
If there is meat in South of France, then it is usually veal so the chef created the Veal cheeks, potato dauphine, potato purée, broccoli, trumpet mushrooms, pumpkin fritters and yours truly foie-gras. The richest dishes of all, but still in the balance realm with mushrooms and broccoli taming the juicy chunk of veal. 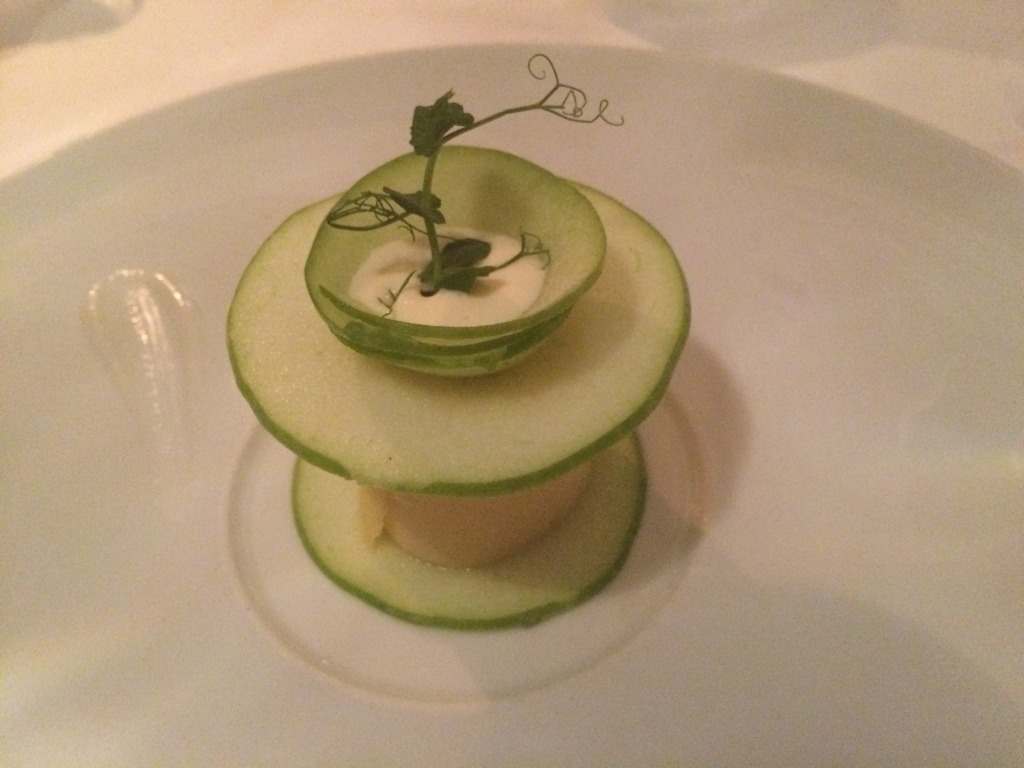 Before the deserts arrived, a cheese course of Comtè & Epoisses, apple and pastis gelly, a typical intermezzo between the savoury and sweet courses on Jan’s menu, came to our table. It was so light, zesty and fresh, unlike most corpulent cheese dishes, so we had enough room left for a desert.
Our plate of Chocolate, roasted banana sorbet and peanut butter powder was the only thing that was not featured on the à la carte menu, so we felt like we benefited from going for the whole thing. My penchant for dark chocolate makes me vulnerable to sweets like this, and I won’t hide it, it was superb but also fun as I’ve never tasted a roasted banana sorbet, a thicker and richer frozen sorbet. And who would resist anything with peanut butter? (Perhaps only people allergic to nuts, and I’m sorry for them.) 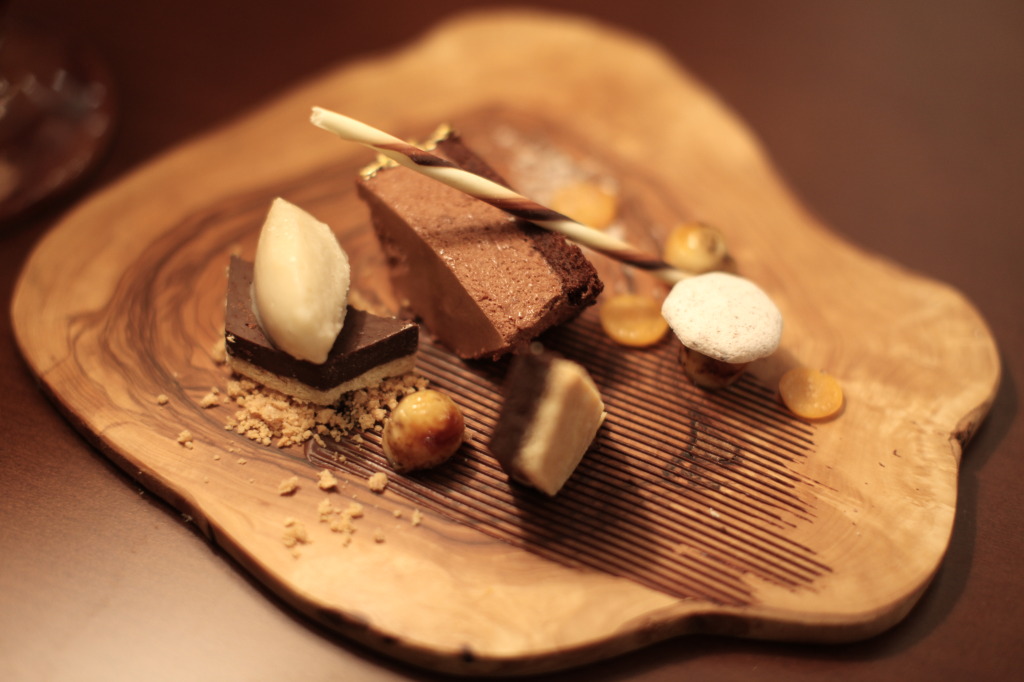 The interior design feels like an old home. The antique-feel of JAN’s interior with vintage furniture, tall candle holders and naturalist paintings makes it feel very warm. An ideal dinner escapade. The chef’s degree in Applied design and his work with the magazine ELLE, where he learned about the importance of food styling, both left their imprints of the sleek and well-thought aesthetics at JAN. 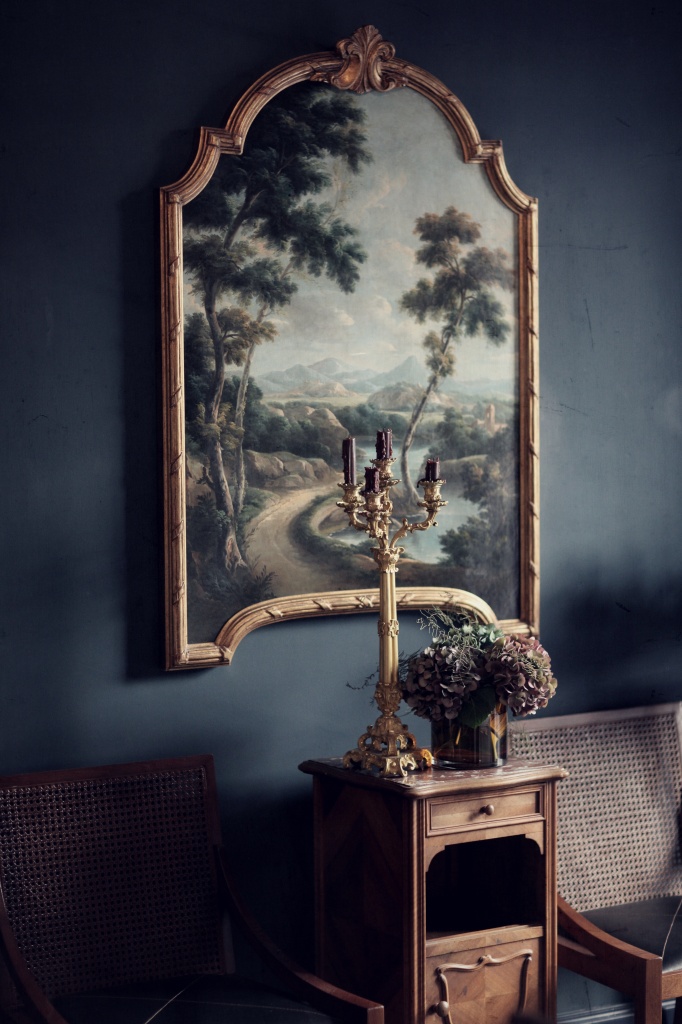 Aside from a good French wine list, JAN has an interesting South African wine selection. Particularly here in France, loud about its produce, wines from other countries are hard to find. Italian perhaps, Spanish maybe, but South African? It is a shame since this country has not only wonderful own varietals such as Pinotage, but its mild climate favours also the international grape varietals. As an aperitif I enjoyed my Ladybird organic white wine from Western Cape area.
We also got a bottle of a recommended red wine from Stellenbosch. The internationally high scoring Bordeaux-Blend (Cab.Sauvignon, Malbec, Merlot, Cab. Franc, Petit Verdot – in order of concentration) De Toren Fusion V from 2011 vintage was aged for 12 months in new and second year oak barrels. Rich plum, blueberry mingle with deep spices, liquorice, dark chocolate and black tea in the background. In particular the veal cheeks with potatoes benefited from this wine’s fragrant yet supple tannins, corpulent structure and 15% alcohol.

You might heart about South Africa recently a lot from the media overtly concerned with the infamous Oscar Pistorius trial, but it is a shame that the other, more positive news not focused on the local violence, are not being reported by the negativity consuming press. Further, when eating out we are overstimulated by the French, Italian, Spanish, Japanese, Chinese, some Vietnamese, but also increasingly by less-known cuisines such as Peruvian, Burmese and thanks to Jan Hendrik now also South African. Let’s celebrate the diversity of our world – positive and negative – through various cuisines and innovative spirits of young chefs like Hendrik. I wish his niçoise endeavour luck and longevity.
Address: 12 Rue Lascaris, Nice, France
Contact: +33 (0) 4 97 19 32 23
Opening hours: Dinner: Tue-Sat: 6:30pm – midnight; lunch on Friday: 12noon – 3pm.
You must confirm your reservation on the day of booking, otherwise it will be canceled.