Giuseppe (‘Beppe’) Rinaldi is of the rare vinous breed in the Northwestern Italian Piedmont. As one of the last traditional Barolo makers he strives to preserve his father’s and grandfather’s lifelong wisdom acquired through decades in winemaking as well as the wine’s cultural heritage. However rebellious to innovation Giuseppe Rinaldi had been, even he decided to give up some of his traditional approaches to Barolo making when, in 2009, the new, stricter DOCG labelling laws came to force [read below about his blended Barolos]. 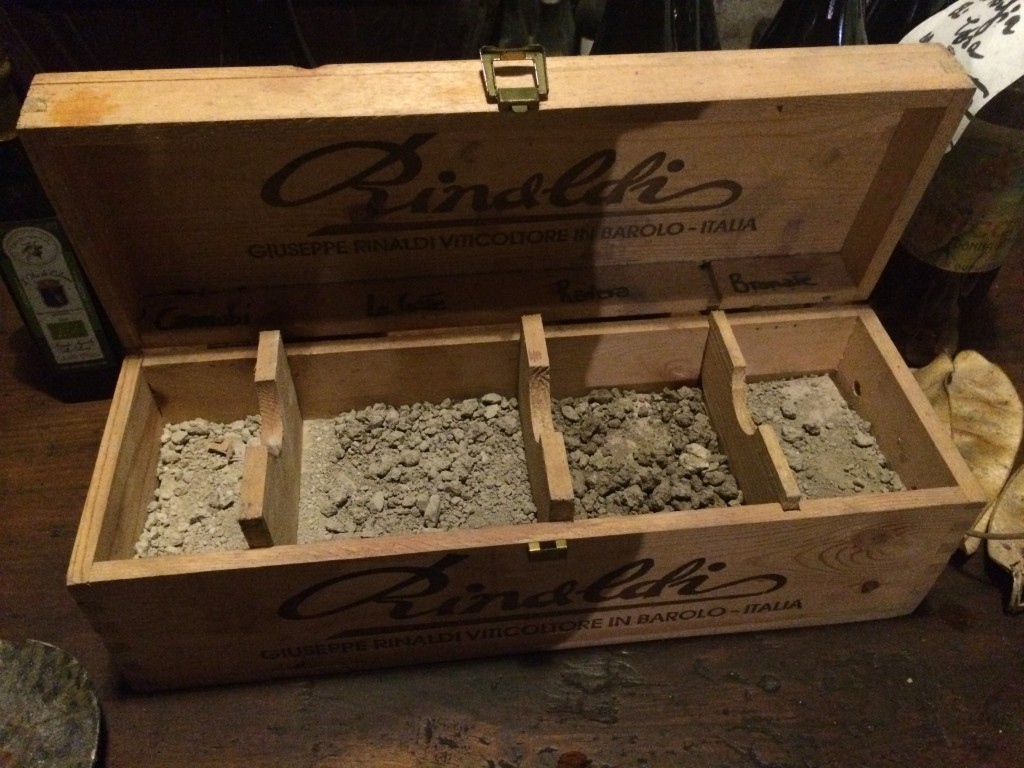 Barolo itself is a tiny village in the Piedmontese hills, but the appellation stretches across a wider area of rolling, curvy and painter’s brush attracting hills, that when observed from above like waves ripple through the horizon. This, by the former Savoyard nobility cherished land, encompasses eleven villages. Of these, La Morra, Monforte d’Alba, Barolo and Serralunga d’Alba, are the biggest communes with most vineyards planted. Rinaldi resides right in the outskirts of Barolo. 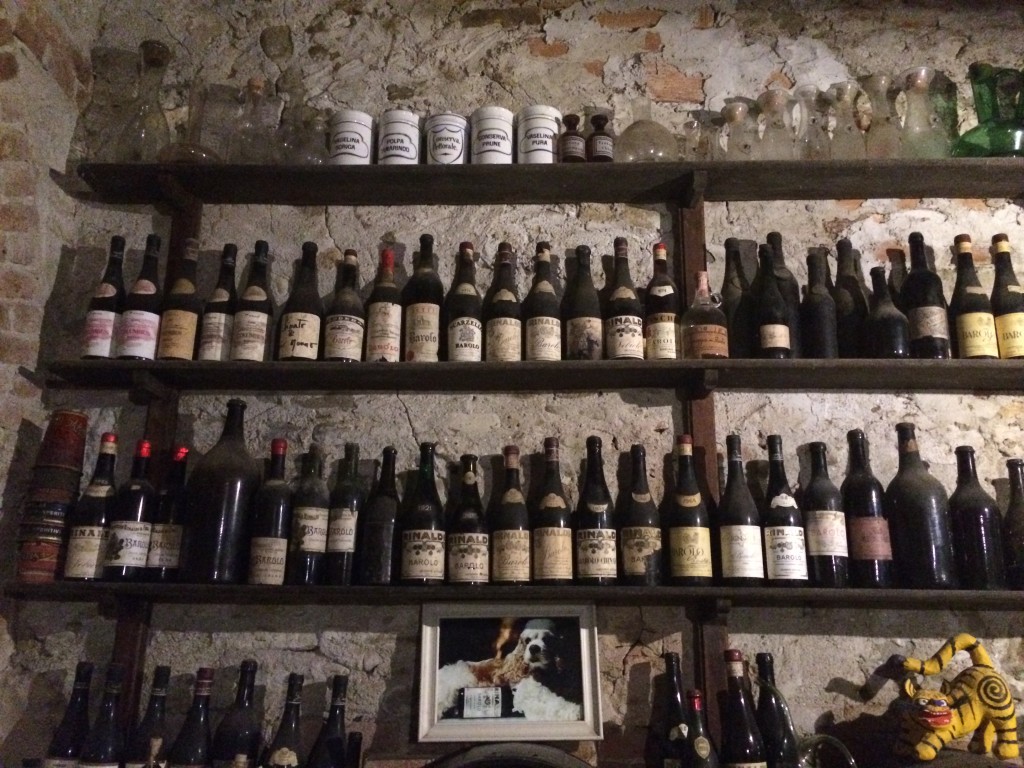 The Rinaldi winery was established by Beppe’s grandfather, and the ageing winemaker himself is committed to the heritage of Barolo, about which he has a deeply rooted knowledge dug out from the local archives. The interior of the winery reflects his almost archaic longings. Like a Barolo’s antique store, dusty with memories triggering objects  – grandchildren’s drawings, dog photographs, tigers, owls, rusty objects and mouldy bottles, the stone building whispers anti-authoritarian slogans like “No Barrique, No Berlusconi” announcing Rinaldi’s distaste of novelty. The pealing off walls, hard to fading labels and everything mellowing into by grey defined hues is like the wine he has been making for decades – genuine, personal and reminiscent of the vintage long gone. 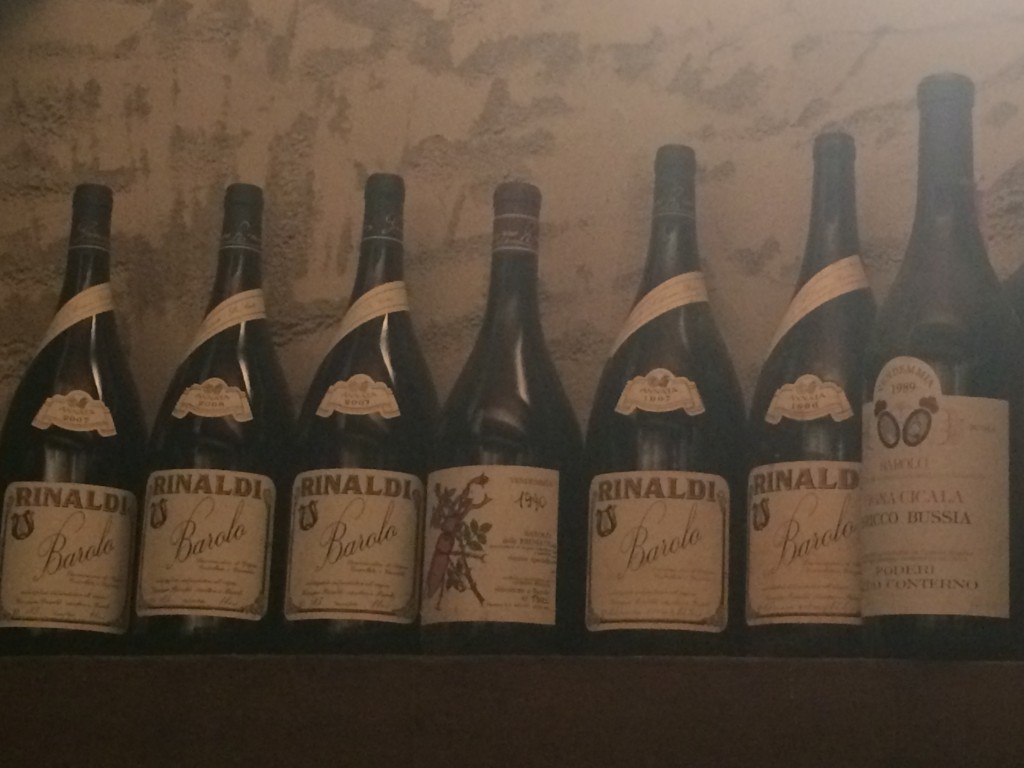 The winemaking operations are also far from modern. Haphazardly scattered pipes and old vats remind of traditional rustic family style winemaking, and not a place where bottles of wine costing hundreds of dollars are made. Using oval-shaped old Slavonian oak barrels for maturation and over hundred years old vats for fermentation is still unquestionable. Although, Rinaldi’s two young daughters – an agronomist Carlotta and oenologist Marta (English speaking and very friendly) – continue so far in his strictly navigated steps, the future will soon be in their own hands.
The hyper casual Giuseppe Rinaldi dresses the challenging tannic Nebbiolo into a freshly cut male leather coat, and as its youthful mouth squeezing harshness matures, it gives way to its characteristic violet, smooth leather, tar and rose scented aromas. 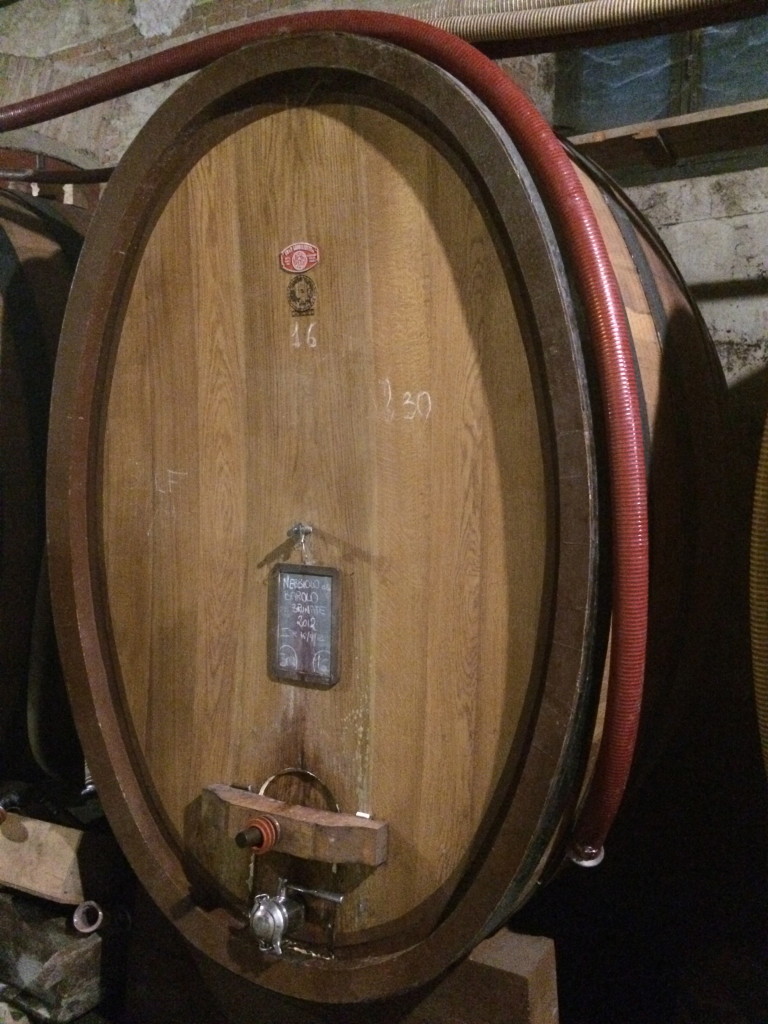 Nebbiolo’s name comes from the Italian word “nebia” meaning a fog. The cool autumn mornings mysteriously hover the Piedmontese valleys with a carpet of fluffy fog. The finished wines’ colour tends to fade only a few years after the vintage, quickly transforming itself into a brick orange veteran. Yet, this façade is only to deceive your eyes, since the wine continues its slow transformation into a complex and rich aged Nebbiolo.

Giuseppe Rinaldi used to make blended Barolo from complementing vineyards such as the Brunate Le Coste 1998 we savoured at Locanda dell Arco restaurant in a tiny village of Cissone. From the 2010 vintage, however, the new rules for the DOCG Barolo’s came to force and he had to decide, if he wants to continue this successful, high scores yielding, practice or to produce only single vineyard titled wine. He went for the second option, and as the 2010 Brunate shows in it 97 points by the US publication Wine Spectator, the wine still overwhelmed the palates of the tasting juries globally (Jancis Robinson gave it 18/20points).
Another blended Barolo was the Cannubi San Lorenzo-Ravera, which you will also find only up to the above mentioned 2009 vintage. Rinaldi’s easy drinking daily wine Dolcetto and Barbera are more affordable, although not as complex, they are more approachable for many wine drinkers.
Giuseppe Rinaldi also makes the youthful white Ruchè and another local, unfortunately slowly disappearing, pinkish red Freisa, that has high tannins like Nabbiolo, but is less capable of ageing and less complex. Its strawberry scented aromas make for a perfect lunch wine, while its bitter tannins call for a generous chunk of butter over your pasta to tame their force.
Barolo, in particular the traditionally made, is not a wine for everyone. You may become to appreciate it much more if you either visit the area like I did and meet the generous local people behind its creation or you already are a bold, eloquent and muscular red wine connoisseur.
3 Via Monforte, Barolo 12060, Cuneo, Piedmont, Italy
+39 17356156