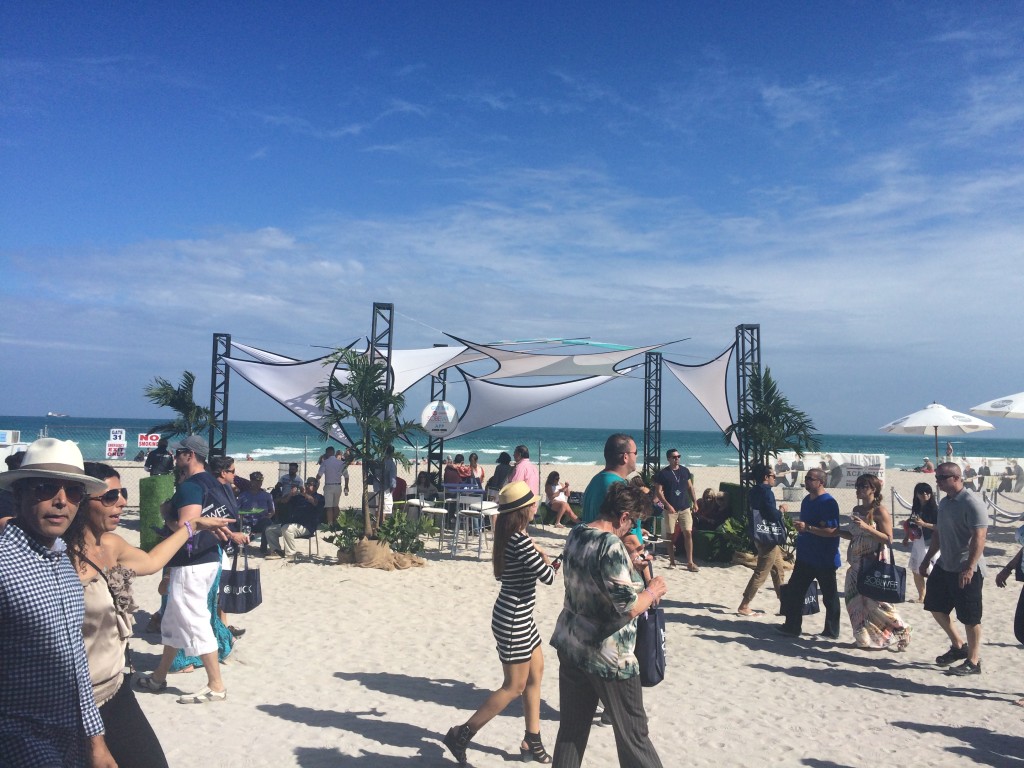 Each year in February, the beach show is upgraded to an even more entertaining spectacle, when during a long weekend, the mostly American foodies (but also indulgent holidaying visitors from abroad) descend upon its white sand carpet to taste, what the annual South Beach Wine & Food Festival (SOBEWFF) has in store for them. The tickets are not cheap – in 2015 about $200 for most of the off-site events and special chefs’ dinners, while the entrance to the Grand Tasting Village itself was $225. A late bird deal on the last day went down to $100 per person allowing an entry after 3pm. The dollars were wisely spent though considering the high quality and diversity of the food offered, the entertaining and at times revelatory demos by the US celebrity chefs, book signings, mind-uplifting alcoholic potions, and hundreds of freebies – from glitzy water originating from far-flung countries (France and New Zealand respectively) to pouches of rubs and spices, cans of Spanish olives, superfood goji berries and nourishing peanut butter bars. To wrap it up into one sentence – for anyone interested in learning more about the Miami restaurant scene, which is extremely vibrant with its potent Latin community, this was a great and tasty introduction. 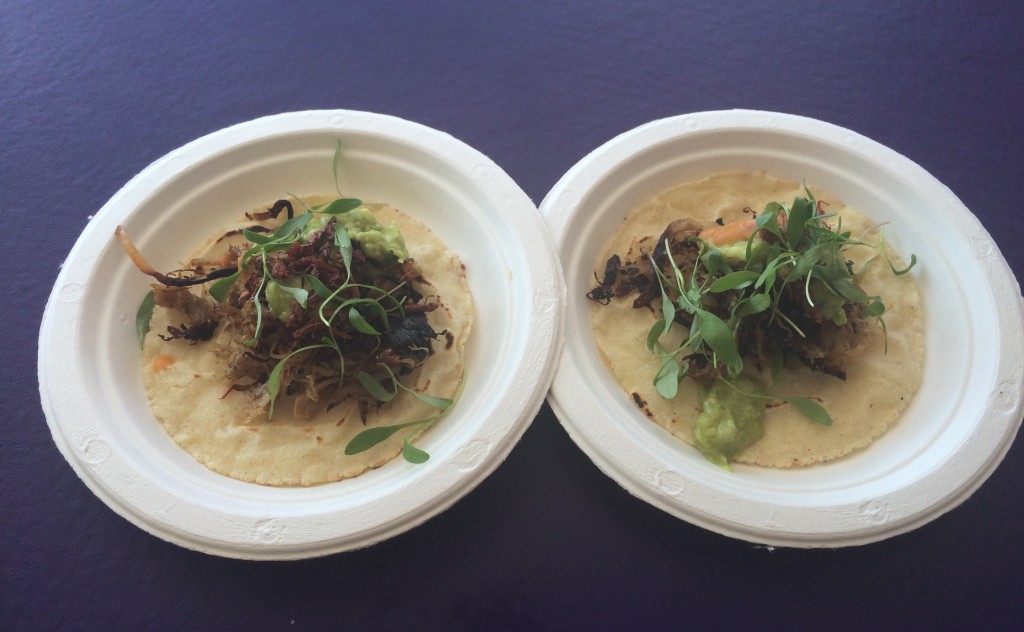 This year, the salivating-inducing weekend came just after the coldest spell on the West coast in decades, with the Miami’s sunny skies and thermometers feeling the chill with an unexpected wave of shivers. Luckily, the hurricane recalling forceful wind calmed down on Saturday, so the chefs, their assistants, the bar tenders and wine pourers could serve the hungry and thirsty crowds, without the otherwise inevitable comedy of flying food hunting in the raunchy air. It would have certainly made for a solid entertainment to see flying grasshoppers tacos in the air. Perhaps the local dolphins would join the feast? 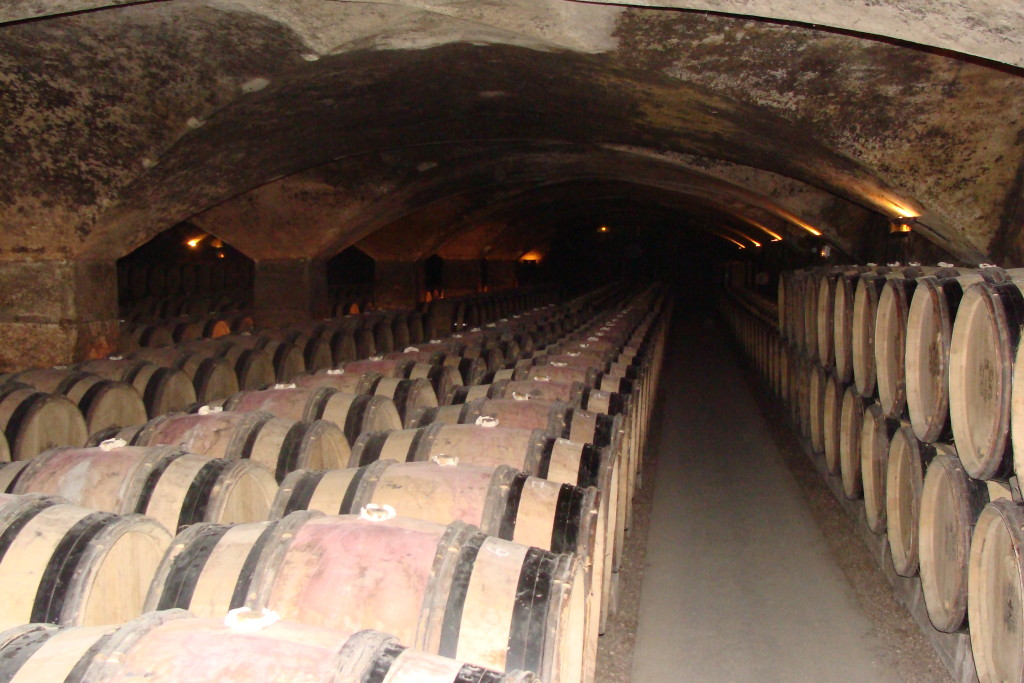 All of us who participated in the vociferous consumption of all the delicacies that included the above mentioned fried grasshopper tacos, refreshing keffir ice lollies, creamy pouches of mozzarella, satisfying cuban pork sandwiches, endless imaginative burgers, local versions of peruvian ceviches, Venezuelan fried cheese sticks “Tequeños“, but also not-yet-tried sprouts and other healthful vegetarian plant proteins (in Beyond Beef Tacos) were thankful for the balmy warm day. 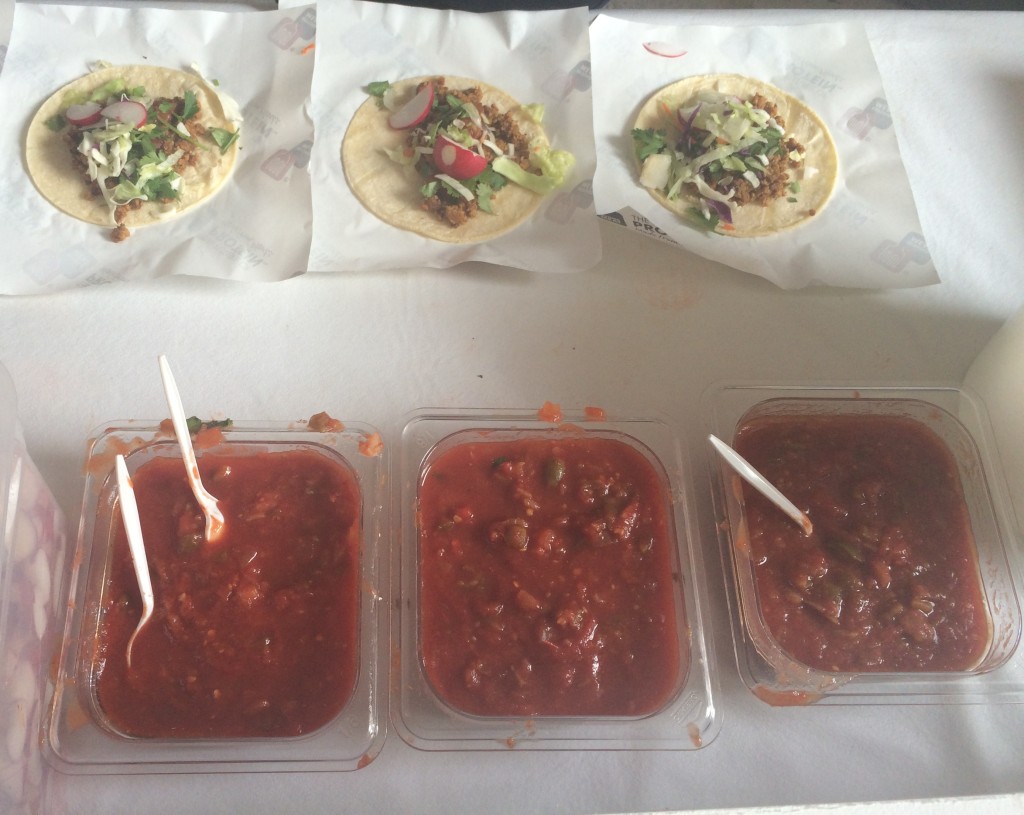 With an array of these innovative delectables causing long waiting lines of cajoled eaters, the future of food has been successfully shaped. A growing choice from vegan and meat-less products alongside the new and more attractively designed plant-based restaurants, was reflected not only in their rife presence at the festival, but also by years refined know-how of combining flavours enticed more of their sceptics. Recently, the coveted health food driven Wholefoods Market became involved in the feast creating the Grand Tasting Village, so there is no wonder that these healthful and sustainable products ate themselves a considerable piece of the extensive tasting space. The fried crunchy grasshoppers in the soft tacos also tell another story. A global infatuation with the unusual, that some would call the “superfoods”, brought insects to our tables and on the shelves of even the most posh grocery stores (I’ve seen them at Selfridges in London), so the local Mexican restaurant Talavera created their own, I must say genuinely delicious, superfood enhanced taco (the naughty pork remained). 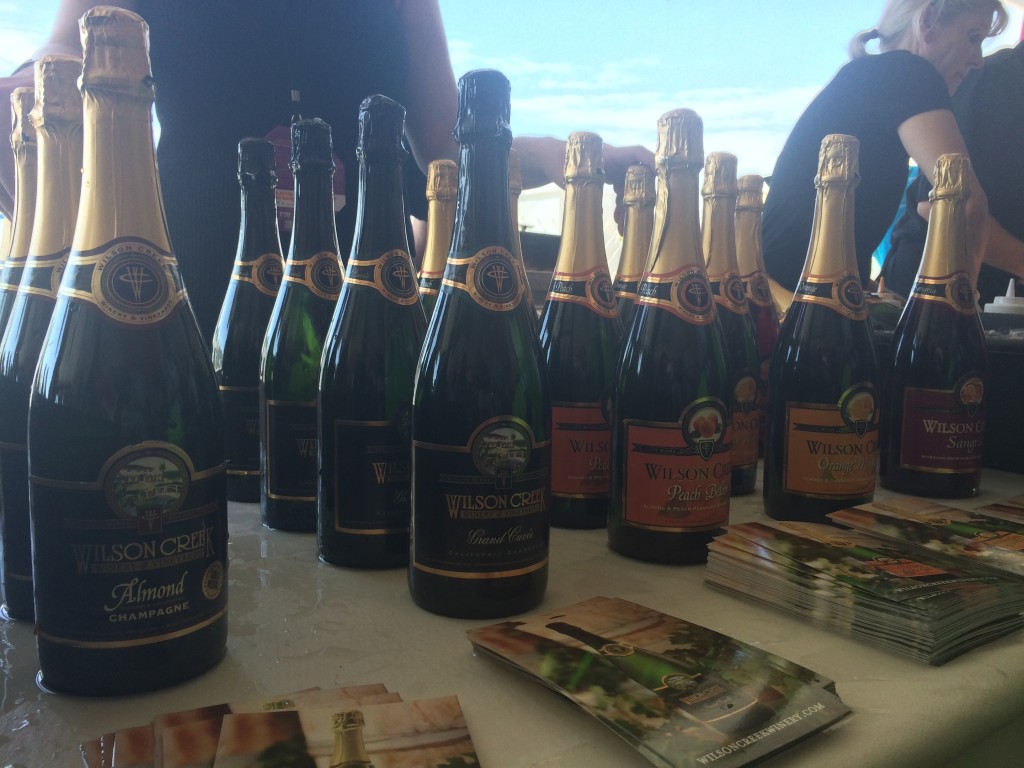 The only substance that could have made the event better were literally some liquid assets. Curiosity teasing drinks like an Almond sparkling wine and coconuts filled with exotic cocktails clinched the thirst of the adventurers. The Wilson Creek “Almond Champagne“, a sparkling wine from California flavoured with almonds, was surprisingly good. Made by the Champenoise method, except of adding a splash of almond oil to the wine during its second fermentation, the bubbles were smooth, and the almond aroma worked well with the slightly toasty wine. Wilson Creek also makes other sparklers infused with peach, orange or in a sangria fashion appealing to fruit and more sweetness (5.8% residual sugar) seeking consumers. The more serious wine drinkers (like me) either signed in for the Wine Spectator’s tasting seminars or sipped on the samples from all corners of the globe at stands set under the giant tents. The Wines of Brazil muscled up to the Florida market with a special corner, but I was the most impressed by the American style “supersize me” gigantic 4.5 l bottle of Graham’s 20-year-old tawny port. 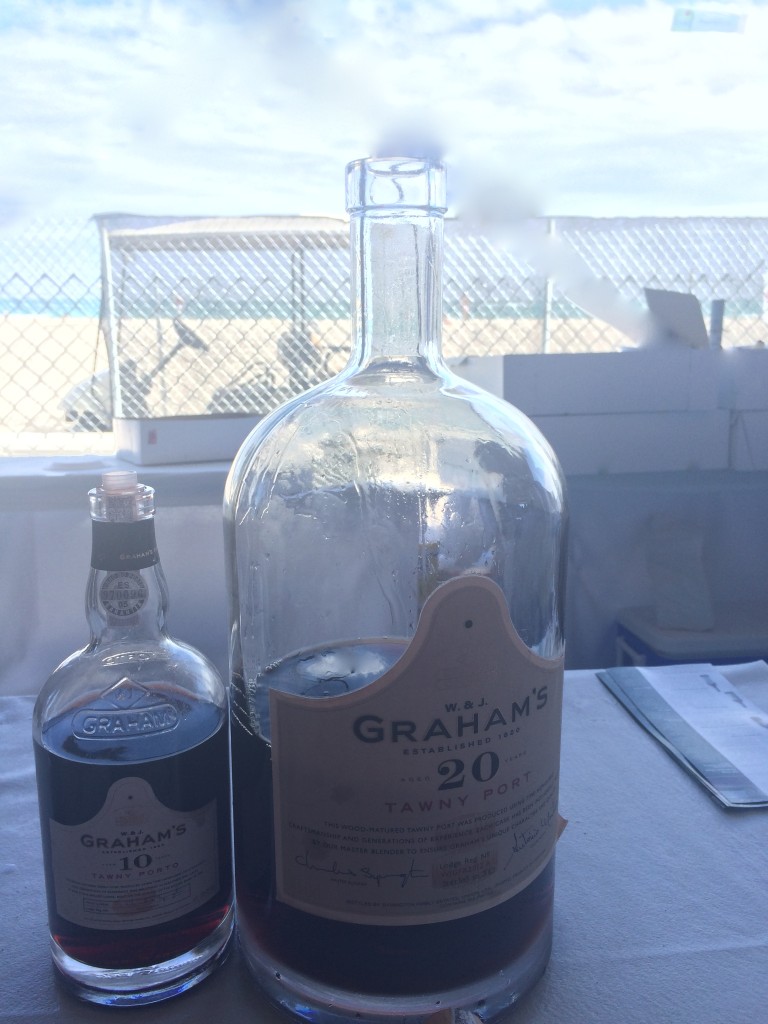 The festival stretched to multiple venues. The tents on the windy South Beach were the most visually captivating structures, while the temperature controlled Miami Beach Convention Center was more suitable for serious wine tastings. The luxurious hotels and local restaurants hosted the globally praised chefs, award ceremonies, lunches, brunches and dinners tantalising the visitors’ taste buds. The setting on by-the-nightclubs-beset South Beach, swallowed also the less serious gourmets, but the more party indulgent crowd. For these the Hard Rock Cafe staged a party on the beach, attracting with bikini-clad dancers shaking their bodies into the Dj’s tunes. Beer on tap as well as bottles of chilled artisan beer and specialist alcohol from rum to other spirits were there for them to rock it out. 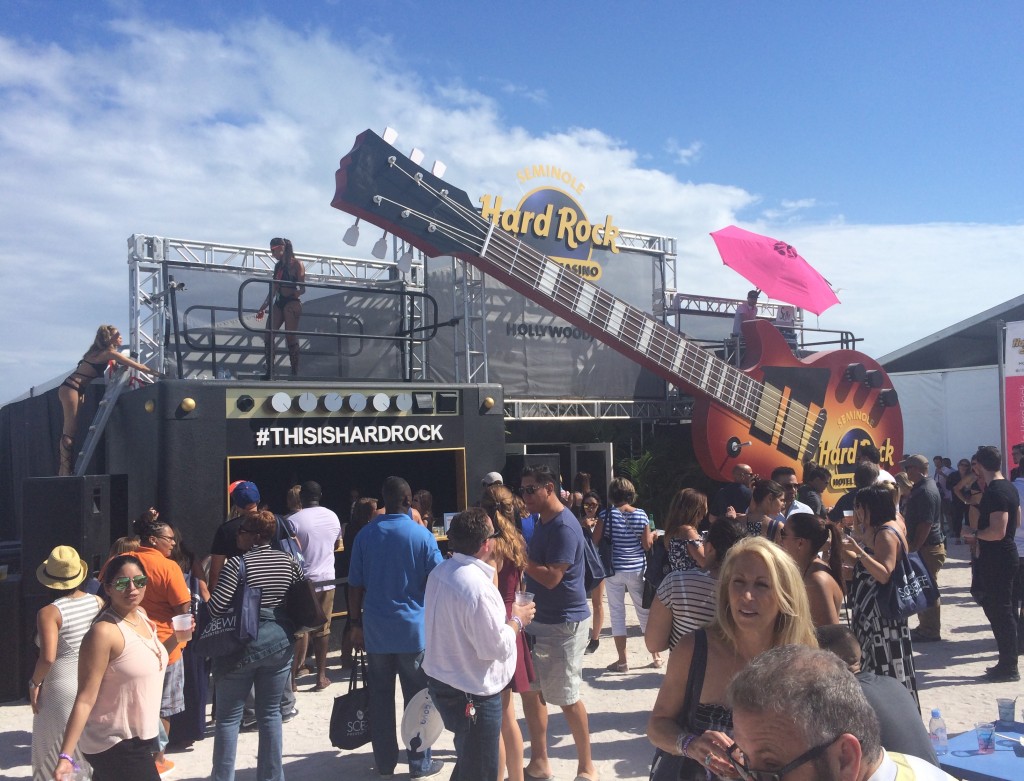 The SOBEWFF is a joint effort of the Southern Wine & Spirits of Florida, Florida International University (FIU), leading US publications – Wine Spectator and Food & Wine, which presents it, but also of the leading gourmet media channels – the Food Network & the Cooking Channel.
The later two, next to sampling of numerous delectable dishes, provided its star chefs, authors and culinary personalities, who on specious Tv-ready covered stages demonstrated their skills in 45-minute segments. The fans could watch live the LA’s French-born Ludo Lefebvre, the US-based Japanese Iron Chef Masaharu Morimoto, the modern Spanish José Andrés, and other renowned chefs based in the United States. Morimoto took his demo as far as showing off his singing capability to the bemused spectators.
Here is a short video of his surprising performance, that earned him an applause:

These, wanting to take some of the culinary or vinous knowledge with them back home, could stop by a  beach book stand loaded with cookbooks authored and in many cases autographed by celebrity chefs as well as the genuine global top in their class such as the Scandinavian Christian F Puglisi and his “A Book of Ideas”.
All attendees were able to vote online for their favorite dishes on the festival and decide which restaurant will win the Miami New Times’ “Short Order’s Best Bite on the Beach” award, but also in other contests attached to the event.
Since the Festival benefits the Chaplin School of Hospitality & Tourism Management, the Wine SpectatorRestaurant Management Laboratory and the Southern Wine & Spirits Beverage Management Center at FIU, you – the food & wine lover who purchased the tickets – contribute to the future leaders in the industry. To date, the Festival has raised more than $20 million for this cause, so hopefully once we all will befit from the innovation and creative flair of its students.