More Michelin stars than for any Spanish chef still shine on the Basque native Martin Beratasegui. Unlike with the rest of his Iberian empire, he ultimately leads his eponymous restaurant near San Sebastian, blessing it with his genial presence. Beratasegui keeps his influence over the Spanish speaking gourmet world. From San Sebastian, through Barcelona, the Canary Islands, Mexico to Dominican Republic, his cuisine is glamorous and beautiful as these destinations are in themselves. 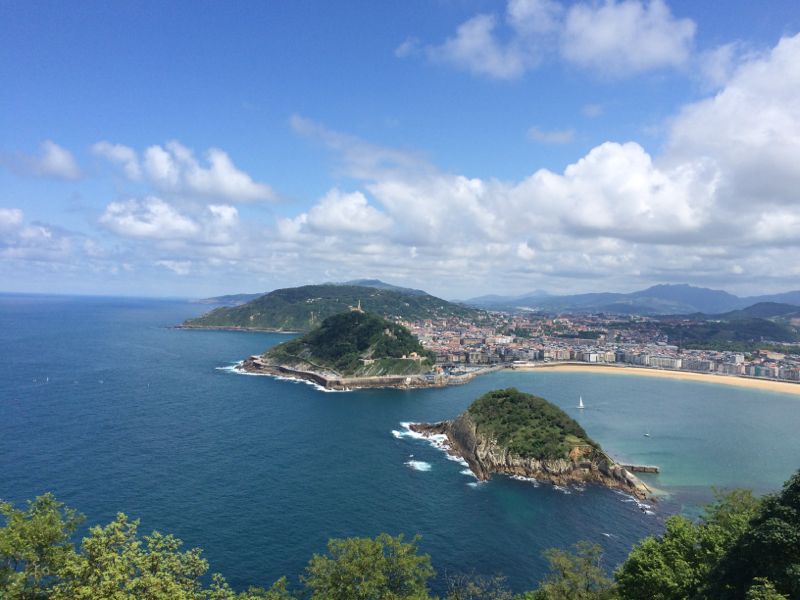 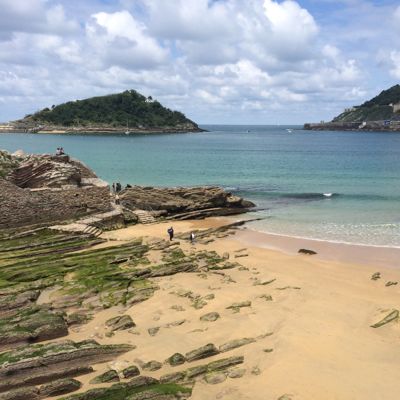 Despite being one of the modern flying chefs that manage to seed their ideas and techniques to bloom in the hands of other chefs, he remains faithful to the trunk of culinary creativity at his dearest restaurant near San Sebastian. With the other top local chefs Martin Beratasegui elevates the Atlantic seafood game – from oysters, red mullet and eel – to the land’s gifts such as swiss chard and foie gras. Bestowed with cooler climate than most of Spain, the Basque natural bounty and his love for the lush region are magnetic. As if wanting to blend with the local environment, the spacious modern dining room is refreshed with a verdant countryside vista through the large windows, making sure you do not miss its charm.
What is the fuel for his creativity? “My daughter”, he answered when I inquired, “she loves to eat”. It seems that honesty and being family oriented are the main motivators for his residency at his three-stared Martin Beratasegui restaurant. 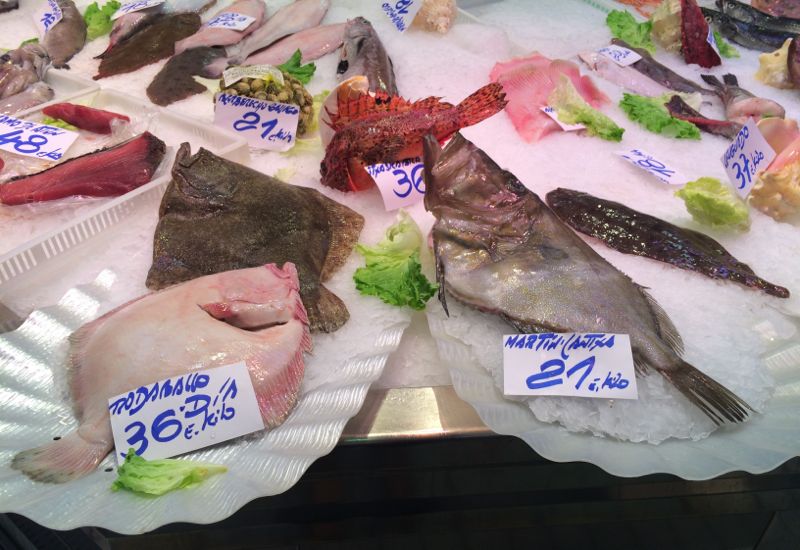 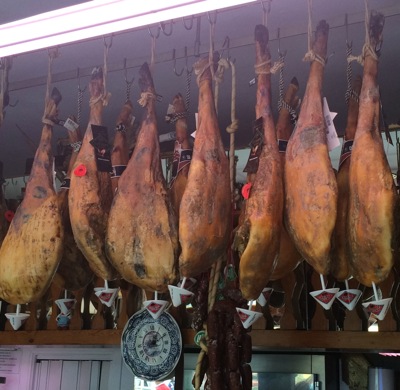 Bordering France has had also a profound influence on the Spain’s Basque cultural and culinary make up. Next to the town’s architecture and serving plenty of foie gras, the rather aloof than warm attitude distinguishes the locals from most of the Iberian natives. The cooler Atlantic coast is a breezy heaven for delicious sea creatures as well as cows, sheep, and vegetables blissed by the moist and salty air. Anchovies, oysters, shrimps, red mullet, cod, hake, bonito tuna, wild mushrooms, and of course the fatty and rich francophone delicacy – foie gras.
Being it my friend’s birthday and our first time in San Sebastian, we went for the Grand Tasting menu. The fourteen courses were in print individually marked by the year in which the recipe appeared on the restaurant’s menu for the first time. 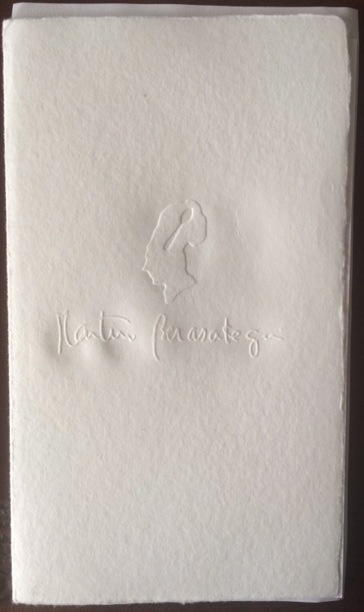 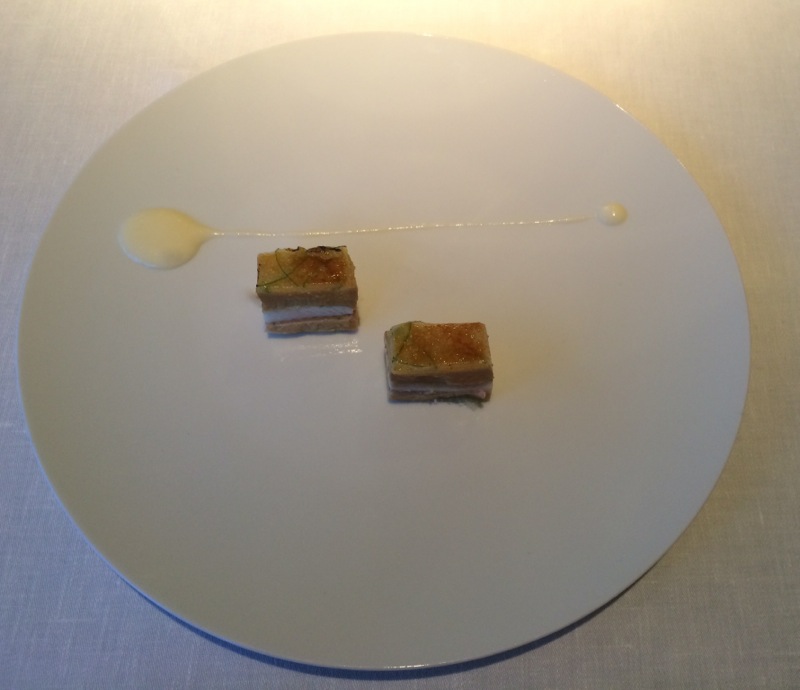 Starting in a simple fashion with a slice of slowly fermented organic bread, dipped in an extra virgin Spanish olive oil we moved to a more visually captivating mini ocean kingdom of small dishes. Like soldiers in front of their captain were lined up Sea crunch tempura with Txakoli wine mayonnaise and citrus gel and Kumquat, potato firewater, olive and anchovy, both from the 2014 ‘vintage’ of the chef’s cellar of recipes. Many chefs use the locally indigenous crisp Txakoli wine in cooking, yet Martin Beratasegui’s more evolved approach balancing the contrasting flavours puzzled and caught us on the rod like the seafood earlier that morning.
Digging deeper into his album, the chef plated a 1995 Mille-feuille of smoked eel, foie-gras, spring onions and green apple. Here our lips met the unctuous, rich goose liver pate. It was served as two perfectly balancing pintxos (tapas), that we were supposed to eat in one bite. But, as proper ladies, elegantly dressed and conservative, we did not gulp on these works of art, and rather carefully crushed with our knives the perfect, delicate and zingy caramelized apple crisp morsels, sliding through the creamy foie-gras into a meatier layer of eel, destroying the perfect cake-shaped form. After our ruinous intervention it did not look as polished as intended, but it was still delicious!
One of my favourite courses was the Red Shrimp Royale and dill with ‘Venta del Barón oil’ from the last year’s chef’s menu inventions. The foamy top was not lacking on taste, freshly scented with the luxurious DOP Priego de Córdoba olive oil, that was professionally recognised as one of the best in the world. Diving my spoon deep into the ceramic, urchin shaped shell, the sleek and moist shrimp were brought to my lips shivering with anticipation. Dill and shrimps, oh yes, working marvellously together! 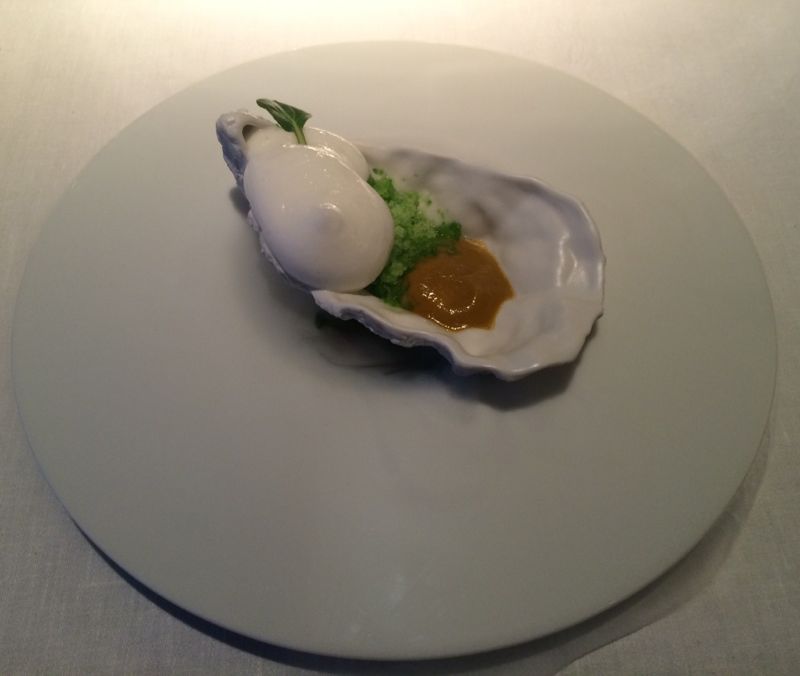 I am not usually a huge oyster fan, but do not call my palate unsophisticated, since we were all formed by experience leading to certain food preferences, and there is an oyster farm in Monaco that I approve of. Texture can be more disturbing than flavour at times, like it often happens with oysters for those who do not like them. I do not find pleasant gulping its contents, yet if you add a nice sauce or cook them, I can slurp this transformation with pleasure. The next gourmet shell of Lightly marinated warm oyster with iced cucumber slush and K5, and spicy apple was not just palatable, but very enjoyable. The savoury sorbet of cucumber, a thick, curry-hued sauce and a dollop of spicy apple cream entertained my mouth with so many different textures that I was distracted form the usually unpleasant oyster. This should stay on the menu to challenge us, the anti-oyster campaigners. 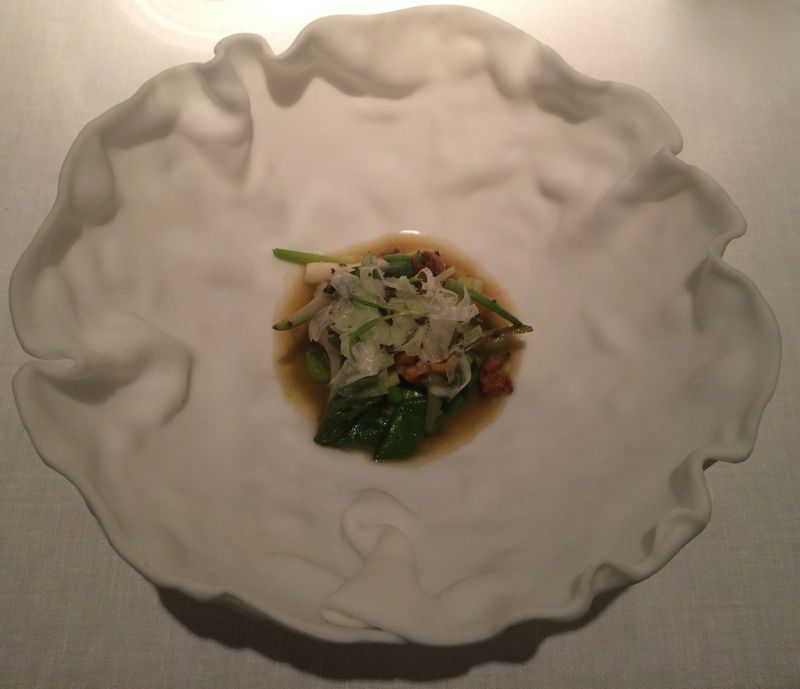 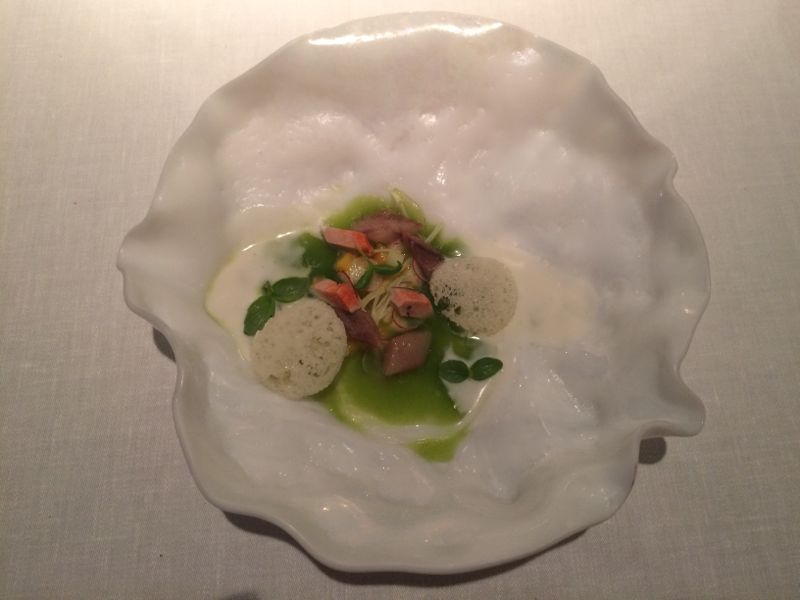 A beautifully organically shaped white bowl nested Monkfish liver marinated in sea chlorophyll with anchovies and seaweed salad. A hide and seek on the plate, under the fluffy capes of foam, in the crisp green chlorophyll juice were swimming morsels of the mildly tasting fish liver and unsalted anchovies, all under herbs, that like water lilies covered the surface. On a similar aesthetic note and in the hight of their seasonal availability were the Crispy golden Swiss chard stems with scallops in their own aniseed-flavoured sea juice. The chef also dusted off, on my request, a 1995 plate of Seasonal vegetables, which depending on the time of the year can be exciting or more subdued, dancing to the seasonal whims of nature’s bounty. 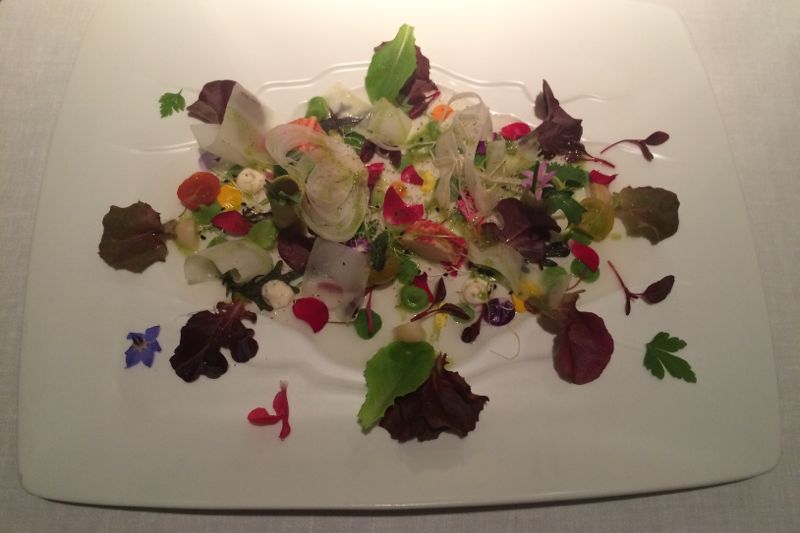 Almost in the middle of the degustation the flavors moved into a richer sphere: “The Truffle” with fermented wild mushrooms and collard greens with ‘Alma de Jerez’ oil. There was not a truffle in the dish, but the fermented local wild mushrooms added weight as did the rich butter sauce. The chef develops each plate to be quite light and consumed within two to five mouthfuls. Next came the colourful Vegetable hearts salad with seafood, cream of lettuce and iodised juice, also from the archives, 2001. Larger than anything before, the leafs and flowers were airy light.
Followed a contemplation over the seasonal sea produce: Red mullet with its scale crystals in red wine, celeriac veloute and ale beer and yet another fish plate of Roasted hake fillet with truffled spinach, mellow spider-crab and sparkling K5 , both floating with a sublime, harmonious complexity showing the fish in its best form. 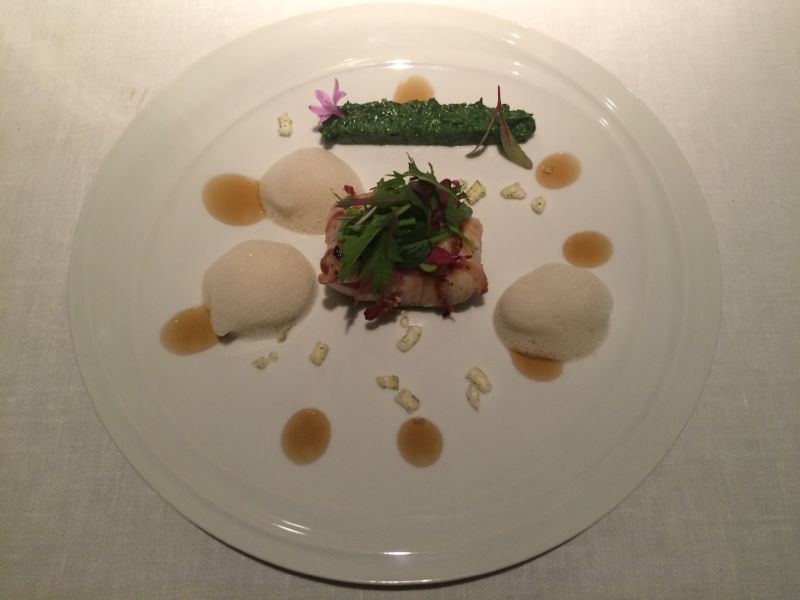 Desserts are of the three star league. The Saffron veil with melt-in-your-mouth macaroons and tea flower ice cream teases your appetite with its fragrant sweet allure. The ‘give me another scoop, please!’ gelato was recalled by my taste memory so vividly still the week after. One more teaser at the end in the from of delicately melting Smoked sponge with cocoa crunch, frozen whisky cream, crushed ice, green beens and mint reminded me of the New York based female chef Amanda Cohen, famous for her vegetable dessert creations. Chocolate and beans… Why not?!

We ordered Spanish wine with all these indulgent local creations. As an aperitif, with the oysters and any fresh seafood, the salty mineral and crisp Txacoli wine made from the namesake local indigenous varietal was a perfect light match. Txacoli is rarely exported since it is produced in small quantities consumed almost entirely locally. While visiting the Basque country, this is a must try. Moving to a white Godello, also indigenous varietal to Spain, which is fruitier, more fuller-bodied, in particular when aged in oak barrels like the Mauro Godello grown in the nearby Castilla y Leon province. My last vinous sips were from a glass of red La Lama Ribeira Sacra DO refreshing and juicy Mencia, another Spanish indigenous grape similar in body to a fruitier Pinot Noir. The affordable wine list does not disappoint. Unlike in France the wines on average are cheaper than the meal at the gastronomic restaurant.
Welcoming is the extensive tea and tisanes offer. For a true tea connoisseur like me, this was a moment of genuine respect for the restaurant. Fruity blends like ‘Funny Bunny’ may appeal to kids, Rooibos based ‘Aloha’ is good for non-caffeinated digestion, while the Japanese gyokuro, Chinese white Pai Mu Tan or a premium Indian Darjeeling satisfy serious tea connoisseurs. I will be back.
🕗 Wed-Sat: Lunch 1pm-2:45pm; Dinner: 8:30pm-10:15pm
Sunday: Lunch 1pm-2:45pm; Closed on Mon & Tue