Sassicaia has sparked a revolution Italy with its Cabernet-based Vino de Tavola (table wine) made in up-to-that-time-yet-unexplored Maremma region of coastal Tuscany. Today, this is perhaps the country’s most wanted wine for the well-off collectors.
Where once thrived peaches and strawberries, now dwell Italy’s most praised grape vines – mostly Cabernet Sauvignon and a little of Cabernet Franc, Merlot and Sangiovese. All that surrounded by sustainable farmland and protected wildlife reserve. The microclimate of Bolgheri is blessed with moderating natural forces like the air cooling sea on its shores and from the wind protecting hills safeguarding its back. 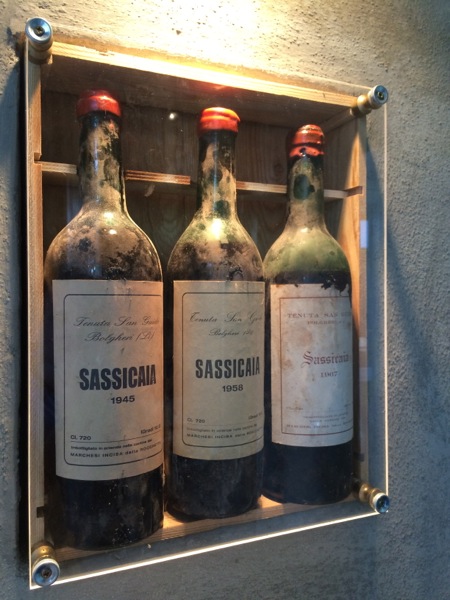 The birth of Sassicaia, to date recognized as the most age-worthy wine in Italy, that continues to coat with its cashmere-like softness the impeccable palates of top wine critiques such as Robert Parker and the Wine Spectator’s James Suckling, was first and foremost a child of passion and love. The enamored was an adventurous and for Bordeaux passionate Italian nobleman the Marchese Incisa della Rocchetta, who planted part of his family farm Tenuta San Guido with about a hectare of Cabernet in the 1940s. It was not just a coincidence that part of this farm in the hands of the Rocchetta family consisted of a similar soil as the rocky Graves in Bordeaux, as the experienced wine lover and fearless nature-respecting farmer recognized this and even named his wine a “stony place”, which is a translation of Sassicaia from Italian.
Some experiments encourage others and the Marchese, after successfully making a barrel-aged Pinot Noir in Northern Italy, ventured further South to plant Cabernet that he found more suitable for Central Italy. During the first decades of its production the wines were only consumed within the family and friends, but aging them in a cellar unveiled the wine’s shocking potential for aging gracefully. After its tannin structure lets go, a silky mouth with complex berry fruit and herbal aromas (lavender, mint), cedar wood, and a lasting impression long after swallowing, charms the wine connoisseurs that are patient enough. The 1985 vintage rated with the maximum of 100 points by the US publication the Wine Spectator started the global craze for this exceptional wine. It is indeed a shame that so much of this gem is drunk too early, before its beauty can bloom with its colorful spectrum of floral petals accompanied by refreshing minerality from the soil.
The success of Sassicaia launched a new DOC appellation, Sassicaia Bolgheri DOC, the only single estate DOC in Italy to date. The area became the magnet for other, mostly Italian wine producers, like Angelo Gaja from Piedmont and the other members of the Antinori family originating from Florence. In 1985 a nephew of Rocchetta, Lodovico Antinori founded another well-aging bomb Ornellaia southwest from Tenuta San Guido. His brother Piero was responsible for marketing Sassicaia, but later he also planted Guado Al Tasso with Cabernet and Merlot to produce a Bogheri DOC wine starting in the 1990s. Gaja established Ca’Markanda, a super modern winery blending humbly with its environment. Today, stretching further South, there are many others making either a blend of Bolgheri DOC or a single varietal Tuscany IGT (including the rare Masseto of Ornellaia), some selling their wines for astronomic sums, while others like Biserno and Grattamacco offering better bargains. You can try many of them, including Sassicaia by the glass at Enoteca Tognoni in the heart of the medieval Bolgheri village. 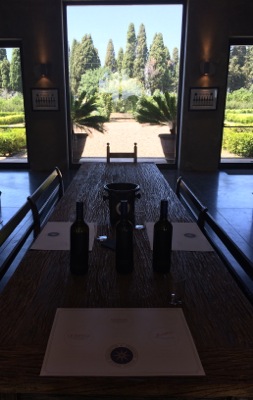 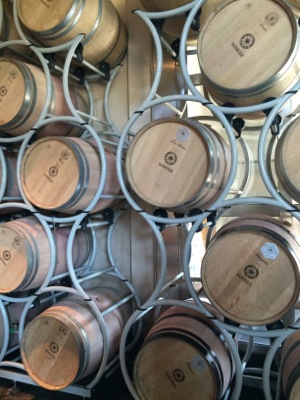 The property is the beacon of a truly sustainable farming. The farm includes next to the exceptional 77 hectares of Sassicaia vineyards,
a wildlife reserve (the first in Italy) where migrating aquatic birds find a refuge,
a forest,
olive groves supporting the soil in more challenging parts of the Tenuta San Guido,
and then a farm producing crops to feed the animals (horses and cattle), for eating and crop rotation as well as for the wild animals.
Most of the 8000 olive groves scattered across yield a blended olive oil, while some serve just as a shade for the crops and the wild animals.
About a half of the farm produces Durum Wheat (farro, emmer), barley, oats for the livestock feed, and rape for biofuel and as a snack for the wild geese hopping around happy flipping their feathers. The other 200 hectares are reserved for forage crops, soil rotation and as supportive food for the wild animals inhabiting the reserve.
The Marchese Mario Incisa della Rocchetta and his wife shared an admiration for horses and together with a renowned breeder created a special breed of The Dormello Olgiata racing horse. One of them named Ribot, became the most famous italian gallop race horse ever. The stables are inseparable from the estate.
Today, the son of Mario, Nicolò continues in the nature preserving cultivation at Tenuta San Guido. 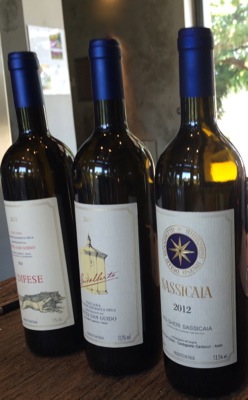 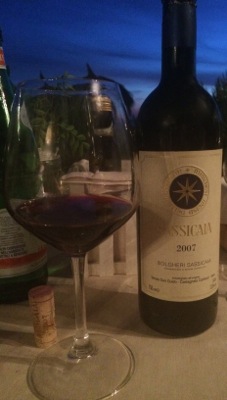 There are three wines produced solely from the grapes planted on the property.
The flagship Sassicaia was first produced purely from Cabernet Sauvignon varietal, but later a small quantity of Cabernet Franc (about 15%) has been added. It was commercially sold since the 1968 vintage. Today, Aaging for two years in small French oak barriques (Yugoslavian oak was also used in the past), and six months in the bottle prior to its release, every single vintage is built to age for many years, so keep it in your cellar or look for older vintages to drink now. For this reason two vintages – 1969 and 1973 were not produced as they were not considered age-worthy. Drinking it too young, under five years after its harvest should be considered disrespectful of its potential. As if you had a talented child playing superbly tennis and instead forced it to become a mathematician instead.
Best vintages: 1985, 1998, 2005, 2006, 2008, 2009.
Guidalberto is more approachable in its youth. The IGT Tuscany blend of Cabernet and Merlot was released in 2000 and is aged for about 15 months in mostly French barriques and a small amount in the American oak barrels. Three months in the bottle before anyone can get a hold of it outside the estate guarantees its readiness for drinking.
The most affordable and easy drinking Le Difese  was released in 2002, not long after its predecessor, as another IGT Tuscany wine of the property. It is closest to its Tuscan heritage since a 30% of Sangiovese is added to the Cabernet.
The winery co-operates with another wine grover and producer in Sardinia, the Agricola Punica, making Barrua and Montessu red wines mostly from the locally grown carignan. These wines for me lack the elegance of Bolgheri though.
As a honored member of Primum Familie Vini, an invitation only international association of the leading wine producing families in the world including the Antinori, Rotschields of Mouton, Egon Muller, Miguel Torres and others, Sassicaia upholds the highest standards of family businesses in the wine industry today. If you can afford it, you must try this iconic Italian wine.