Perhaps thanks to the modern Redbull empire, Thai tea remains in the shadows of the local energy drinks, yet it is an essential beverage of a daily consumption there.

Tucked inside the luxurious Erawan Bangkok mall, not far from the Siam Central overground station hub and a lofty line up of five-star hotels, the Erawan Tea Room is one of the most popular hangouts of the high heeled Thai society as well as not just a tea loving expats. It became my regular Thai tea luncheon in the city after a local friend first took me there in 2012.

The tea room and restaurant serves traditional Thai cuisine and Afternoon tea with a subtle contemporary twist. If you fancy your papaya salad less spicy, the kitchen accommodates your preference. So does the sweet sugarcane syrup served on the side of the beverages so you can add as much as you like. 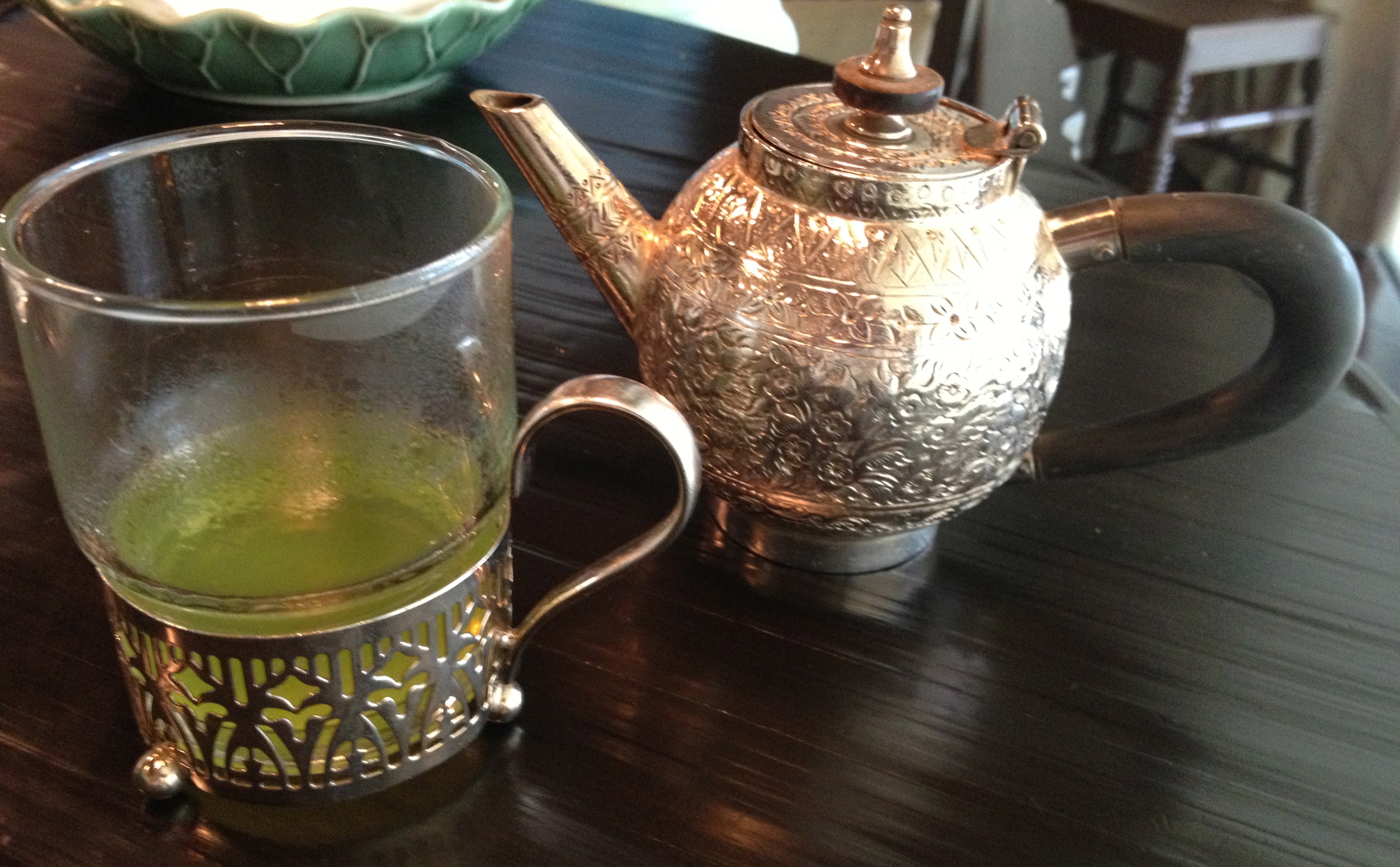 Perhaps thanks to the modern Redbull empire, Thai tea remains in the shadows of the local energy drinks, yet it is an essential beverage of a daily consumption there. In the former Kingdom of Siam a cup of black or to be more precise red tea is usually sipped with breakfast.
The red-hued leafy beverage got to Thailand from the Yunnan province in China, but later like in Hong Kong a local custom evolved into pouring some sweet milk into it. Like the British, the Thais mellowed the bitter taste of the highly oxidised tea with a creamy textue and softer flavor. At most places a condensed sweet milk is more common than fresh cow’s milk since it is not as sensitive to temperature changes. An average Thai person did not have a refrigerator back then and most street vendors selling it from carts still today do not risk their customers getting sick. In the tropical heat it is now more popular to be served on the rocks, and at nice restaurants you even get the milk on the side.
In the English fashion a selection of miniature desserts and savory sandwiches is served with the Afternoon tea, but here expect a Thai twist of the snacks and not the typical chedar sandwich and and clotted cream.
I also enjoy the caffeine-free freshly brewed Thai herbal infusions of pandan leafs, lemongrass or bael fruit. The first two often poured over the crushed ice, while the later digestive is served hot. 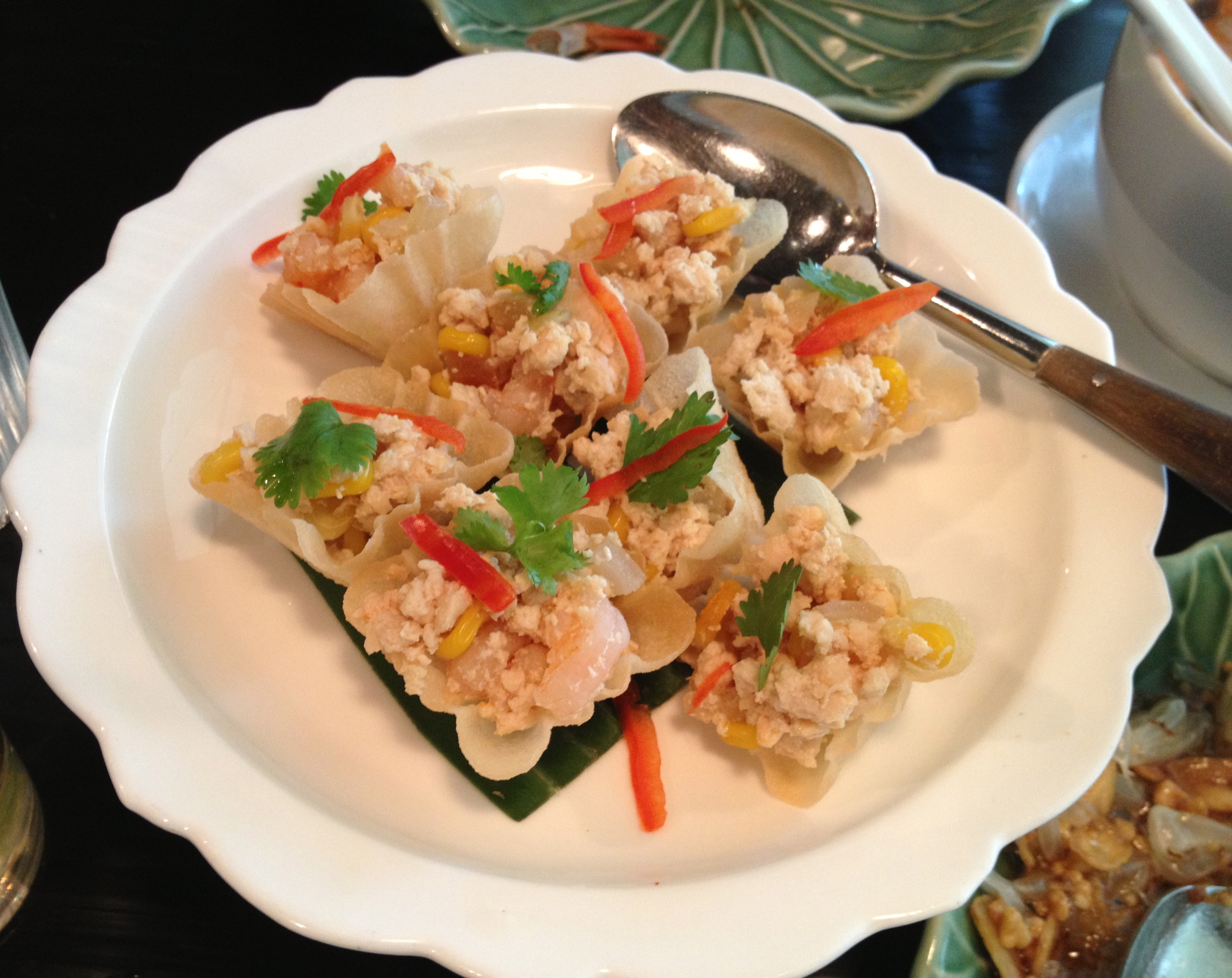 Thai traditional food goes very well with these local beverages. Acidity and the spices are balanced by either the creamy texture of the milk, the tannins of the tea or by diluting of the herbal and plant infusions.

Chef Sarawut directs his team to use great quality local ingredients in portions that are not too overwhelming but can be shared as is typical for a Thai meal.

If I miss my favorite soup Tom Kha, I start with its mildly spiced version. Although usually the coconut milk with button mushrooms calm the fire of the chili paste, lemongrass and galangal, still ask for less spicy if you are sensitive to extreme heat in your food.

The Som Pla shredded Pappaya salad with peanuts in a chili vinaigrette as well as the Pomelo salad with dried shrimps are both excellent for cooling off in the hot Bangkok weather.

For a meaty starter the Chicken wrapped in banana leaf is not as good as the Chicken lettuce cups or Chicken saté marinated in coconut milk and cubed on thin wooden skewers. Dip each bite into the exquisite slightly spicy peanut sauce and ask for extra if cannot get enough. The Thai marinade and sauce are less pungent than the Mallaysian versions.

As a mid course getting a carb fix of the Pad Thai noodles, stir fried with mungo bean sprouts, shrimps and eggs. At Erawan the noodles are a plate cleaner. Delicious! 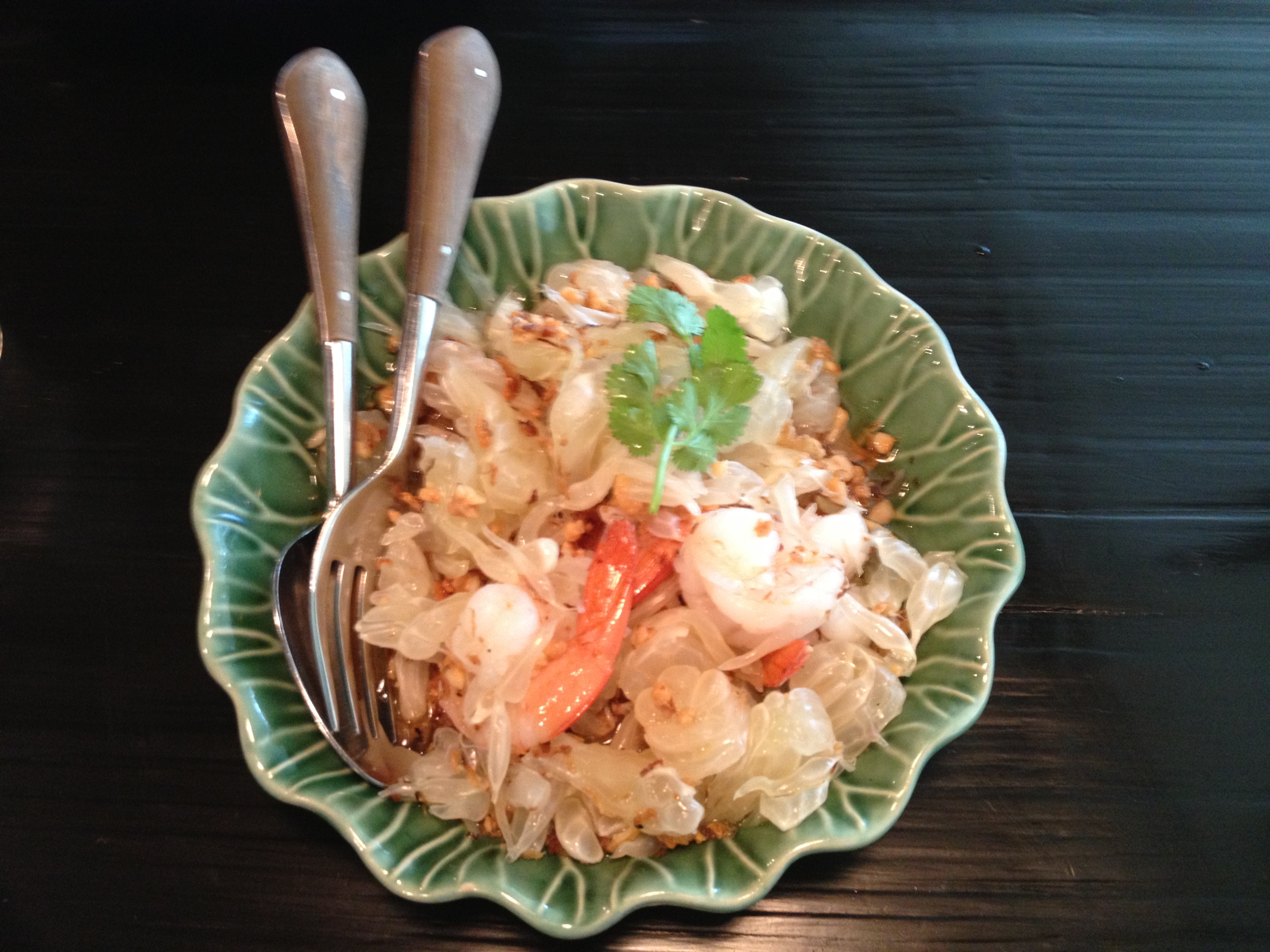 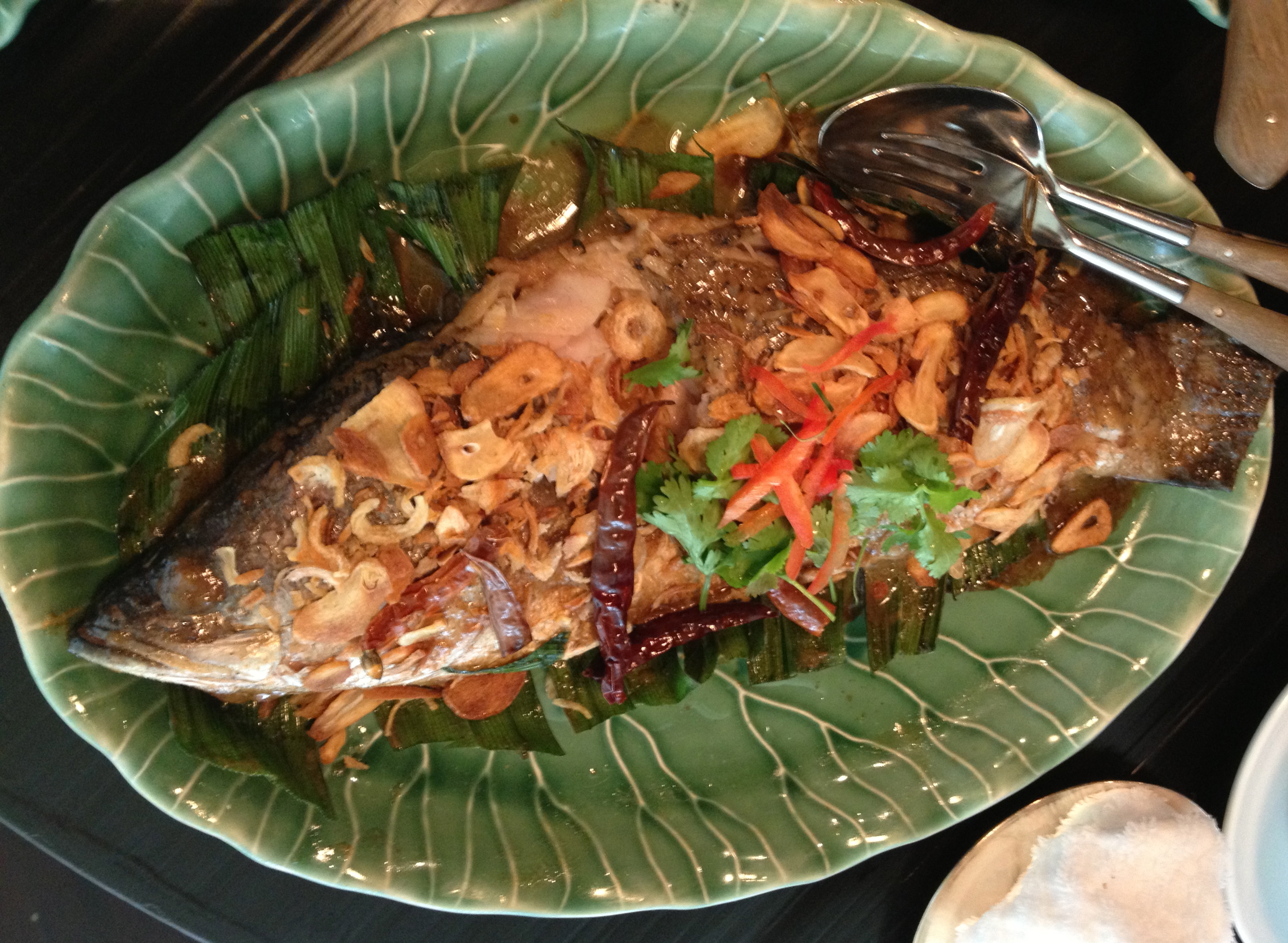 Pork is popular in the East Thailand and some dishes highlight this meat. The Pork Belly is beloved by my Thai friend, while my husband and myself generally prefer fish and seafood in Thailand over the meat.

The Yam Pla Dook Foo, fried Catfish Salad with Green Mango Dressing and the much lighter Pae Sa Isaan, the Steamed Sea Bass and Vegetables with Chilli Dip are both delectable main fish plates. The bass in particular.

For a final sweet touch the exquisite Thai fruits like mango, melon, sweet banana, papaya, pineapple, mangosteen or other seasonal local natural produce are as healthy as they are delicious. I always dream about the swetness of the juicy Thai pineapple, which no other country can merit.

The beautifully appointed smart-casual setting whose panoramic windows overlook the fascinating Erawan Shrine ( shockingly, the site of the horrific bombing early in 2015), offer a spiritual refuge in the midst of the urban sprawl of Bangkok. Now heavily guarded outside you can cosy up in the rich, classic decor of the internationally acclaimed designer Tony Chi who has revived the nostalgic atmosphere of a bygone Siamese era. 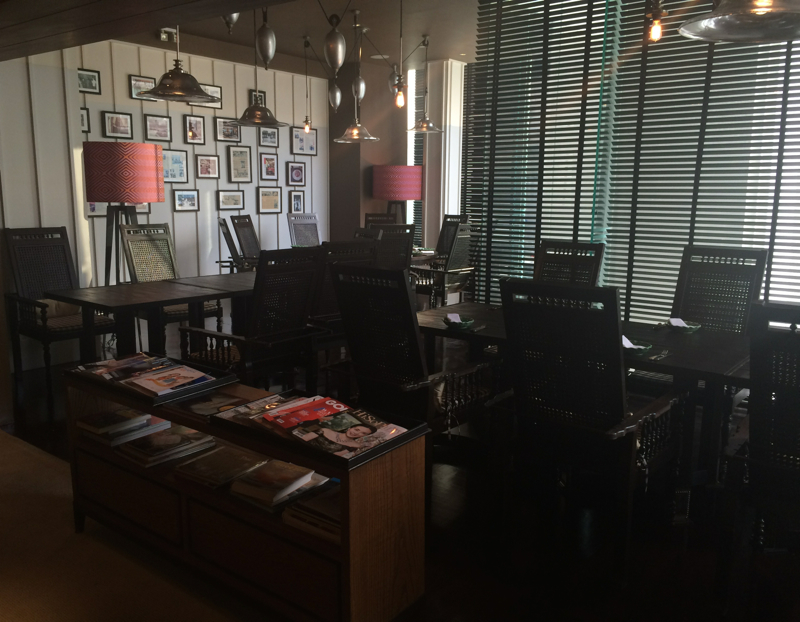 Watching devote Buddhists bringing and laying the fragrant chrysanthemum and jasmine garlands or leis near the Buddha’s image, praying and singing in the midst of the golden shimmering daylight reflections is a magic spectacle.
It is a shame to swirl through too fast, take time with your tea, a friend or a meal. Before departing, check out the packaged products such as the local taro chips, fruit jams, Thai ceramics, traditional pewter tea pots as well as a wide selection of teas not only from Thailand. Local produce is prefered, yet like with wine tea differs tremendously with terroir, which any serious tea room must accomodate.

The Afternoon tea between 2:30 and 6pm is better to reserve ahead. 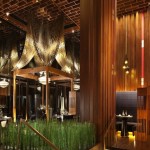 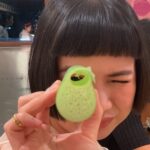