"Welcoming diners in style, tables dressed in white linen, bulbous chandeliers hinting design conscious mindset and the sleek midnight shaded wood furnishings, surely impress well-heeled customers. Add a classy bar, and you also attract many non-vegans in search for a meatless break, still challenging to find in the US restaurants."

Prior to his own stint at Crossroads, the healthy lifestyle inspiring chef and owner of the restaurant prepared vegan meals for Oprah Winfrey’s vegan cleanse, catered Ellen DeGeneres vegan wedding, and even ventured into politics through food. Arianna Huffington’s party at the Democratic National Convention, and the first vegan dinner at the U.S. Senate were both catered by Tal Ronen. 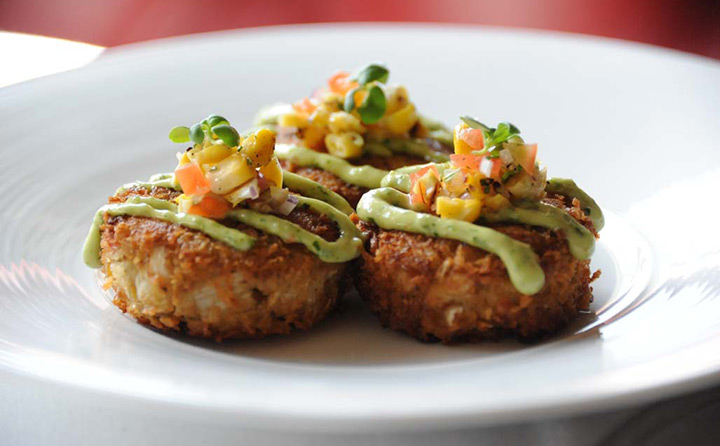 Ronen, perhaps the most attuned vegan chef in America, spotted his luxurious opening on Melrose with a vision of an eagle. The restaurant-packed West Hollywood in Los Angeles still remains the city’s most adventurous gastronomic trendsetter. Despite the rising boldness of the edgy Venice, where now Matthew Kenney‘s Plant Food and Wine does just fine and Cafe Gratitude still serves the best vegan lunches in town, Melrose is the home to the more polished Mexican vegan hangout Gracias Madre, as well as other, by celebrities sought after restaurants with meat and cheese not crossed off the menu.
Welcoming diners in style, tables dressed in white linen, bulbous chandeliers hinting design conscious mindset and the sleek midnight shaded wood furnishings, surely impress well-heeled customers. Add a classy bar, and you also attract many non-vegans in search for a meatless break, still challenging to find in the US restaurants. The Bloody Mary cart with garnishes like an almond milk truffle dill cheese, a dehydrated tomato wheel or roasted balsamic cipollini onion lure in any brunch goers. 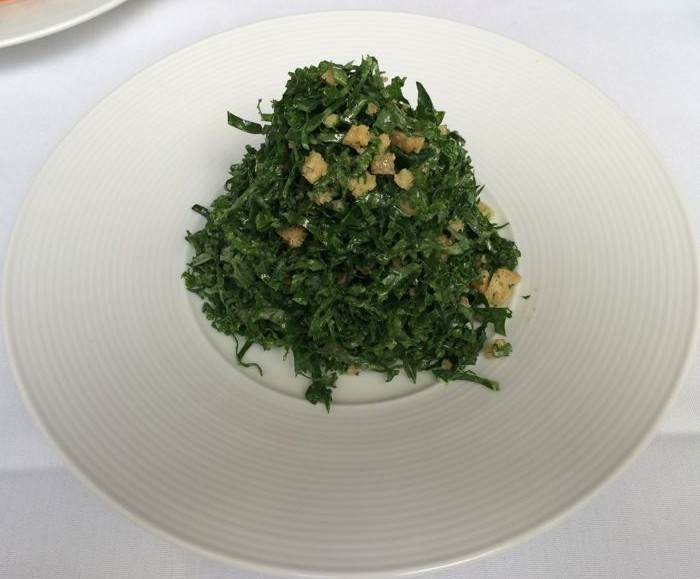 While the menu is largely inspired by the Mediterranean, to me it seems like an homage to Italy really. Nut-based ricotta, pasta, cheese-free pizza, risotto and scallopini Milanese always feature on the menu. Morrocan flashes with vegan takes on American classics such as the hearts of palm Crabcakes or almond creamy New York style Cheesecake also pop here and there. Ronen’s culinary knowledge was harnessed at New York-based Natural Gourmet Institute, which encourages healthful cooking and eating. He also worked in Manhattan’s Candle 79 vegan restaurant. The Israeli chef once devoured his favorite pastrami sandwiches, stuffed with gregarious chunks of kosher meat, but his education at the Natural Gourmet Institute opened his eyes to a more sustainable lifestyle.
Today, he teaches cooking classes at le Cordon Blue and appears regularly on gastronomic events such as the South Beach Food and Wine Festival in Miami. He smartly substituted animal produce with similar taste profiles creating dishes that are comforting, season-driven, and capriciously delicious. Tal Ronen is the master magician of meatless eating. 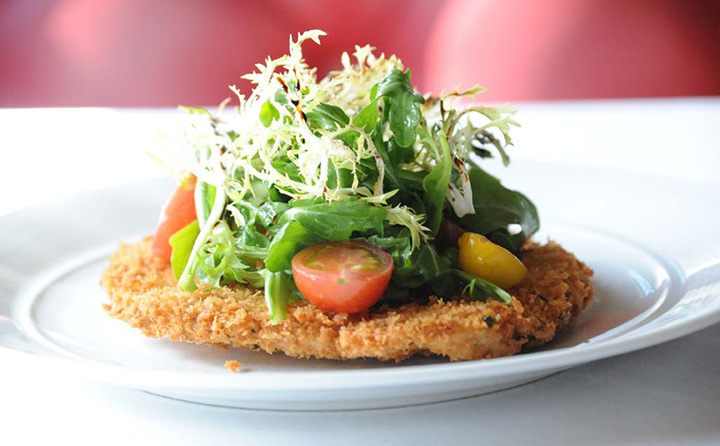 Our past two dinners started either with the Artichoke ‘oysters’, the ‘Crab’ cakes or the exquisite Charred Ricotta. The artichoke hearts topped with its pulp cream, crispy oyster mushrooms and kelp (seaweed) caviar are a light finger food with a lofty name. The Crab Cakes are heartier and perfect with a glass of mineral white wine, like their non-vegan original version. Moving to the main game with Tortelloni pasta stuffed with almond cheese and oven dried tomatoes, in a spinach cream and a parsley frisee salad for me, I did not miss any real cheese stuffing at all, indeed my taste buds were clapping with genuine happiness. Another comforting take on a classic Italian dish is the Scaloppini Millanese. The thinly pounded Scaloppini are made from “premade gardein™, a garden grown protein with the texture and taste of meat. In this breaded plate it substituted the veal brilliantly! You can also have it with nut-based “parmesan” instead.
If you still crave something next to your main course then the Porcini truffle fondue are hard to beat. The small hot pan of creamy “cheezy” dip served with fresh bread and granny smith apples is indulgent in the moment and will not make you feel as if someone had put stones into your belly after waking up the next morning. The thin crust pizza is also very popular. The proof of its greatness was that most tables around us were having it on both dinner visits. Next time!
A sweet finish does not to wear your down either at Crossroads. The Coconut sorbet encased in a dark chocolate nest, called for some reason “magic shell”, was creamy yet light and would humble any coco nation’s own preparations. Coconut milk and meat are top choices for many vegan chefs and it often appears also in savory recipes, with the exception of the nut-based cheese plates. 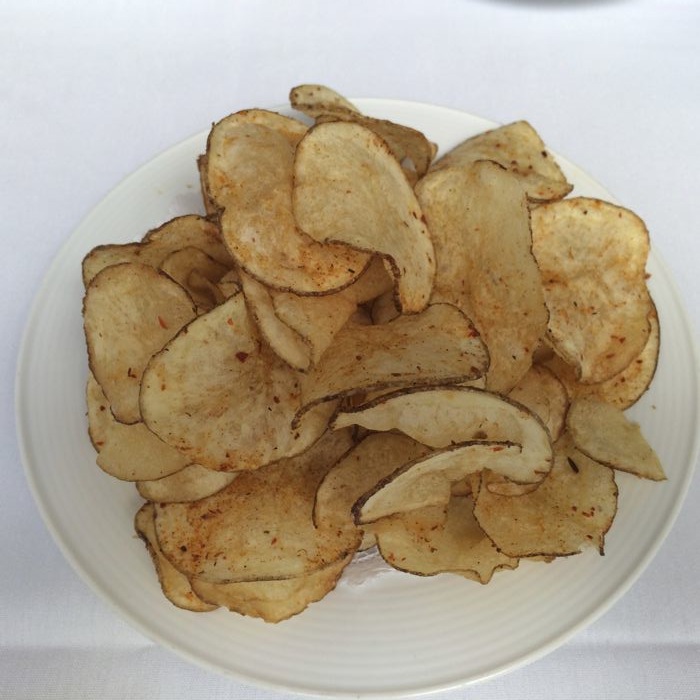 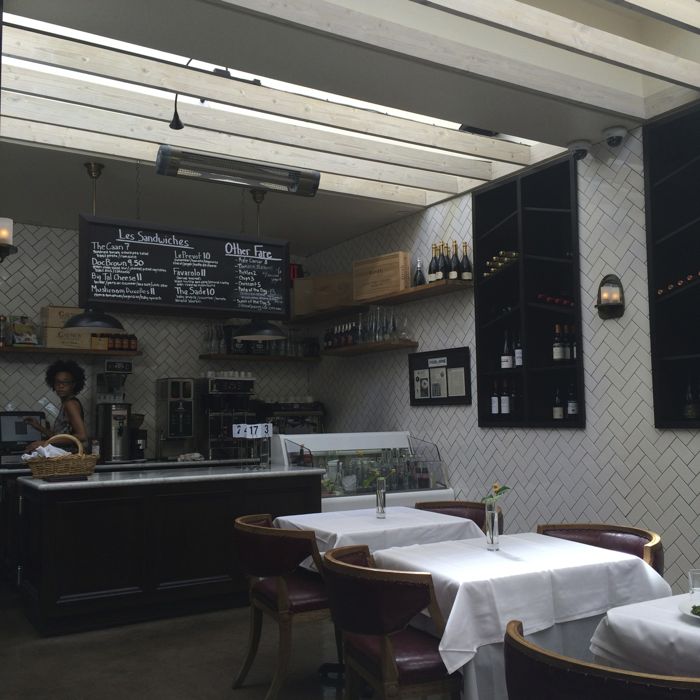 For lunch, the menu is very different. Expect vegan Crossroads Benedict with shiitake “bacon” and no eggs of course, sandwiches, sweet pancakes, chips and simple yet delicious Kale Caesar salad. The main dining room is closed for lunch, but the adjoining bright café space is less busy while catering to the casual lunch seeking locals.
Warmly decorated private dining room and wine and “cheese” room with a retractable rooftop accommodate special occasions. For tipples the smartly assembled cocktail and wine lists accompany the animal-friendly indulgent evening out. Crossroads is a smart-casual vegan restaurant that indeed crossed the zebra between the increasingly popular hippie vegan cafes and the more dressy restaurants.
Whether you are a vegan, which means no animal produce consumed and worn, or not, you might date someone who has converted into this restrictive lifestyle. Plant-based food can be delicious, even better than meat and cream, but it has to be cooked well. Tal Ronen and some other talented plant food-focused chefs have proven that animal-free dining can be savored and liberating, at least for one’s ability to eschew suffering involved in eating any commercially provided animal produce. The chef even called his first cookbook “The Conscious Cook” spot on!
🕗 Brunch daily 10:00 am – 2 pm
Dinner: Fri – Sat 5:00 pm – 12:00 am
Sun – Thurs 5:00 pm – 10:00 pm
✉ 8284 Melrose Avenue, Los Angeles, California, USA

☏ +(1) 323 782 9245
MY NOTE: Although your cardiologist will approve of plant food, unfortunately, most vegan food is not suitable for nut allergies. As the chefs try to include more protein and make the food filling, nuts seemed to have caught their attention in the preparation of their meals. I wish there were more chefs doing at least two-thirds of their menu nut-free. 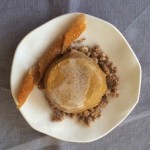 Matthew Kenney: Entertaining in the raw 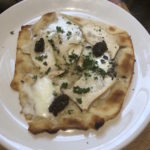 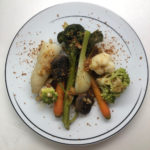 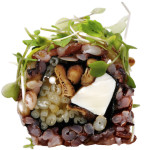