Matthew Kenney is a brilliant chef-businessman. In America, he is the Daniel Bolud of plant-based food. Educating about and promoting raw gastronomy at his culinary academies in California, Florida, Maine, and in Thailand (his penchant for using plenty of coconut meat had probably driven him there, right to the source). Raising the future stars of raw cuisine is just one goal of his career, inspiring foodies to prepare some of his challenging recipes at home became another target once the chef got into the medialised spotlight. Kenney, like Bolud, Ducasse and other multi-faceted entrepreneurial chefs, lent his favorite recipes to an increasing library of books. 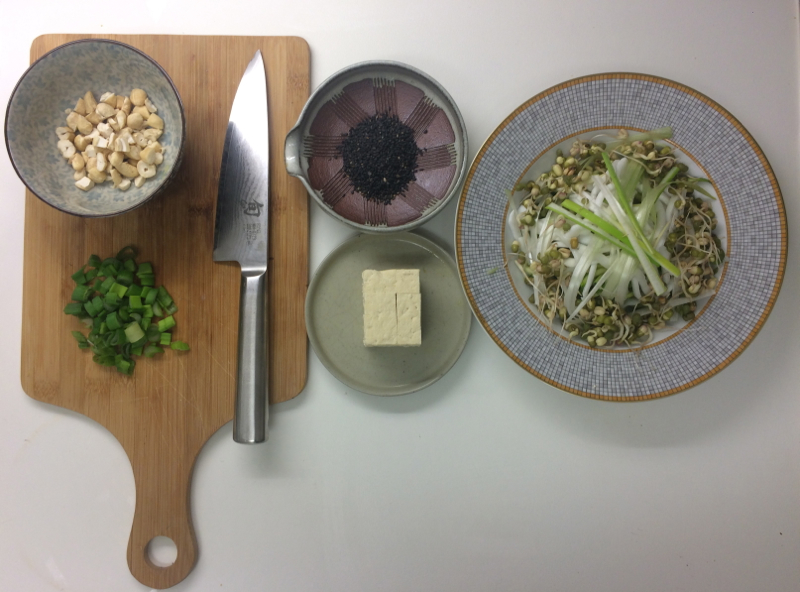 Entrertaining in the raw focuses on enjoying the process of creation as well as sharing the included sophisticated raw dishes with others. Whether catering a wedding, a birthday party or just having a casual meal with your loved one or a group of friends, this is a healthier, nutrients packed resource for challenges-seeking cooks. The elaborate and tried recipes are designed to please the guest, but they may puzzle those unfamiliar with raw food preparation techniques, yet as you proceed, trial and error will teach you the right way.
At times, you might just get inspired and make your own version of his complex plates. I did that plenty of times before I acquired a dehydrator, before I was able to import fresh young coconut meat to my Mediterranean home or simply when I was not in the mood for hours-lasting lunch preparation. For a simple snack, in my raw Beet ravioli with pine nut “ricotta”, I combined the idea of using beets (recipe p.44) as a reliable holder of my raw nut “ricotta” (recipe p.150). In fall, after returning from my truffle hunt in Piedmont, I ‘spiraled’ a zucchini (easy to get here throughout the year) into plant spaghetti, shaved the fragrant white truffle on it with a dash of olive oil. Takes five minutes and it is sense-blowing! 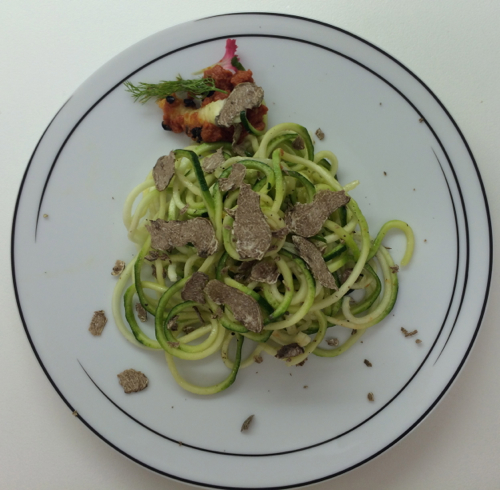 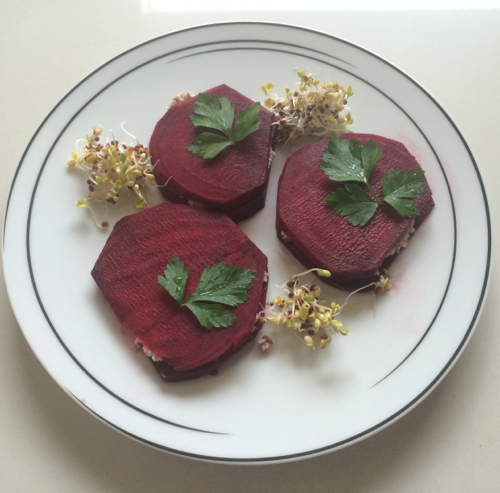 This book is for a skilled chef searching for an adventure and inspiration. Even Kenney confesses, that at the start preparing raw was “somehat a challenge“. Unless you are either a pro raw chef or you spent months perfecting the specific techniques used in place of the classical, heat using processes, you might get stuck with an event spoiler.
The magical raw transformation happens through soaking, marinating, blending, chilling, freezing, or dehydrating of the preferably organic ingredients. However, Kenney does not precisely specify the length of the total preparation and the dehydration time can vary by hours! Humidity and weather conditions in various locations are the culprit of this variability and the chef alerts the reader in his introduction to the book. You should definitelly read it before you start any action in the kitchen. Kenney is an haute cuisine chef himself, therefore, his recipes are more advanced. The writing style requires relevant experience since he is not specific enough. Like what type of apple or miso are should you use?
Further, he cannot be excused for not including a proper timeline for each recipe. For an effective planning, first you need to know how much time is needed for soaking, then for assembling the ingredients together, and then dehydrating or freezing should be better approximated. I ended up extending the final stage by three to five hours diverting from his guidance. Therefore, prepare everything far ahead of your guests arrival. 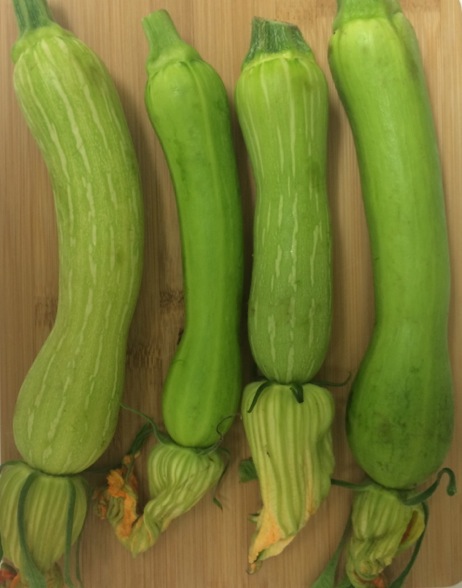 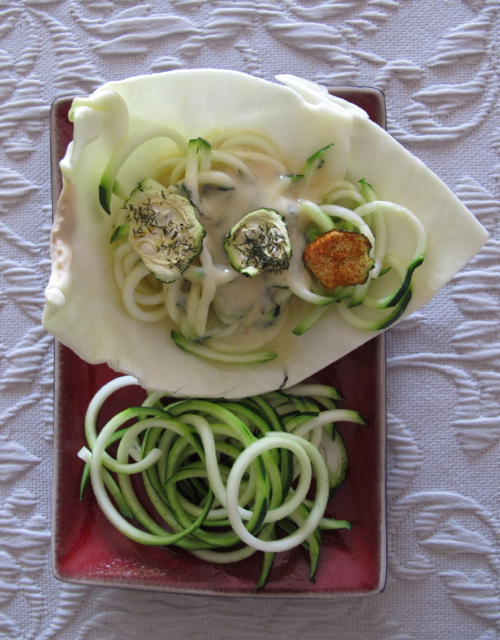 Most raw food is quite volatile, but there are some exceptions and I would welcome these to be specified inside the book so your effort does not come in vain. If you are new to raw food preparation, then you will also need to invest into this indispensable equipment:

If you are looking for an effective, quick meals inspiring book, back off. But, alluring rewards await the curious. Once you source the exotic ingredients (for a European also convert the cups and inches into the metric system since the chart is tiny at the bottom of the index at the back), invest a pinch of patience, the delicious results are worth the effort.

Sweetening with agave and maple syrup, pouring cups of healthful alkalizing lemon juice into most of his creations, and coconut meat almost everywhere you look, are Kenney’s signature basics next to the usual nuts, seeds and veggies in the raw cuisine. Yellow squash is also his beloved friend, but it is highly seasonal, so I replaced it with a slightly harder green squash (zucchini). A surprise, it will be blended in the dosa or pappadam dough! The chef also embraces the Ayurvedic concept of including more sattvic foods.
Emotions, seasons, and values related to experimental cuisine inspired the seven thematic chapters:
Blossom; Contemporary; Inspiration; Spice; Radiance; Revolution; and Meaningful.
As a side effect, savory and sweet recipes are mixed up in the book, making this resource unfeasable for a quick, by a certain craving aroused inspiration. You are forced to dig in, comprehend the raw principles, plan, and use the detective power of the Internet to source some ingredients. I eschewed the Irish moss and my dishes did not fell apart. 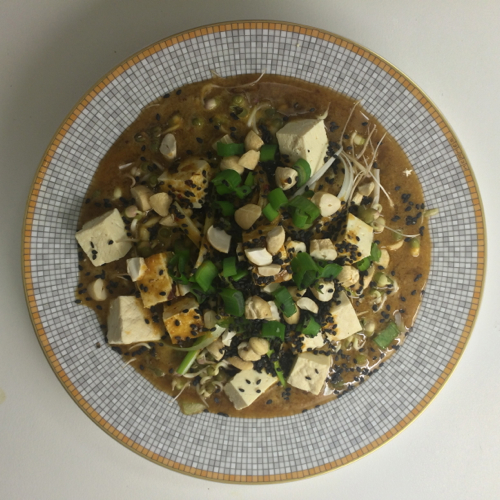 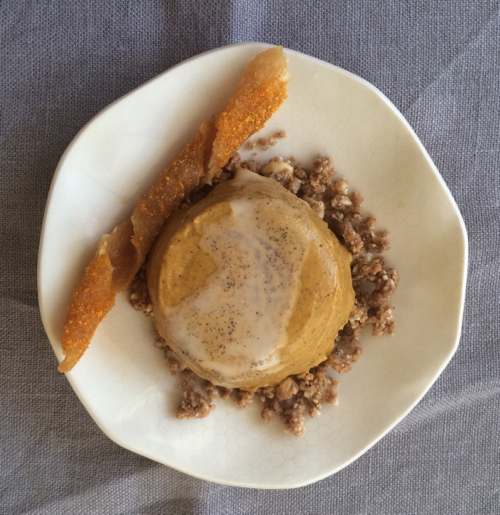 My favorite dishes by Matthew Kenney:

From what I tried to prepare, I did not fancy the Japanese zaru somen and sweet dashi sake broth as I found it too salty and strong on its own. 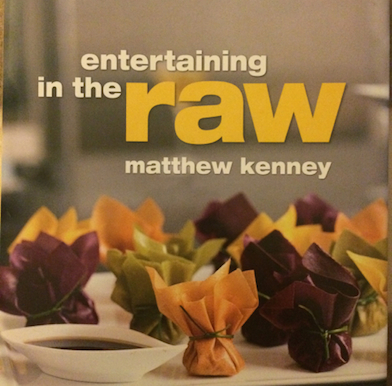 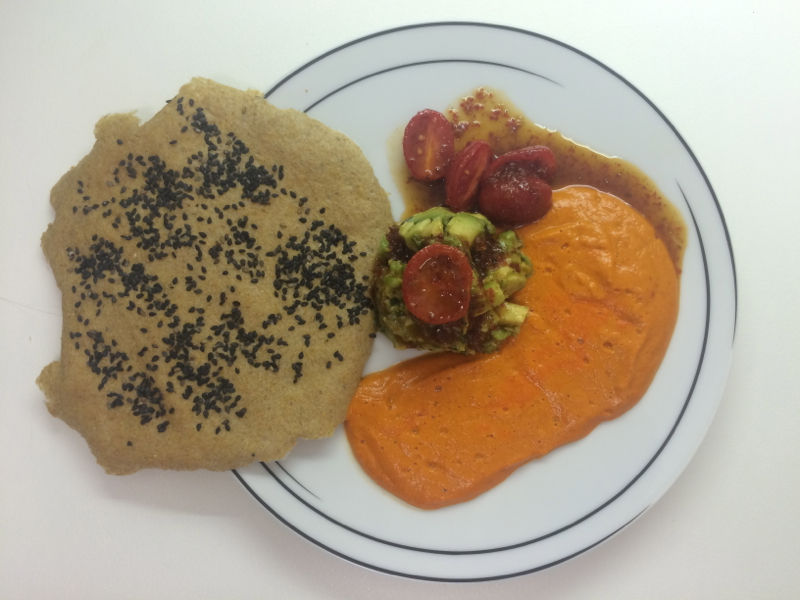 As I already mentioned, plenty of the raw material is hard to find outside of Florida or California. Jicama, young coconut meat (buy it pure at Wholefoods or some health stores as it is hard to scrape it smoothly out of the coconut! I’ve tried it at one of Kenney’s raw classes myself, no more). The “cheese” is usually made from the pricey pine nuts, but you can use chashew or macadamias instead. Nutritional yeast adding cheese flavor to the nut-based sauces, dips, and fillings, can be acquired at health food stores. Nut allergy sufferers jump far away from the contemporary raw food lifestyle, since nuts and seeds are the ultimate fat and protein sources in the popular vegan strain of this diet. The current raw food preparations are often also hypercaloric, so if you are not physically active, beware. To his credit, Kenney’s portions are very small, so you will be able to maintain your slender physique as he does. 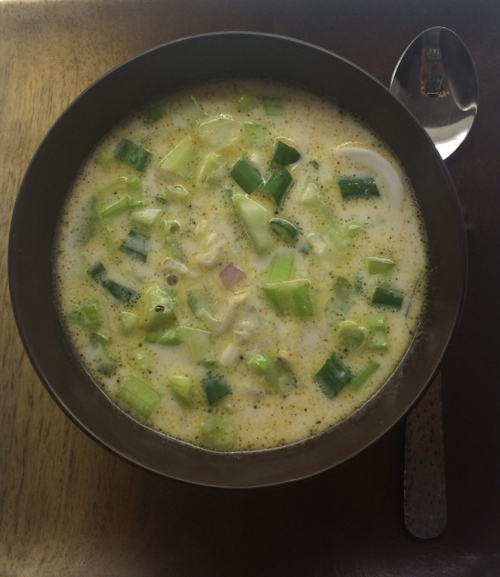 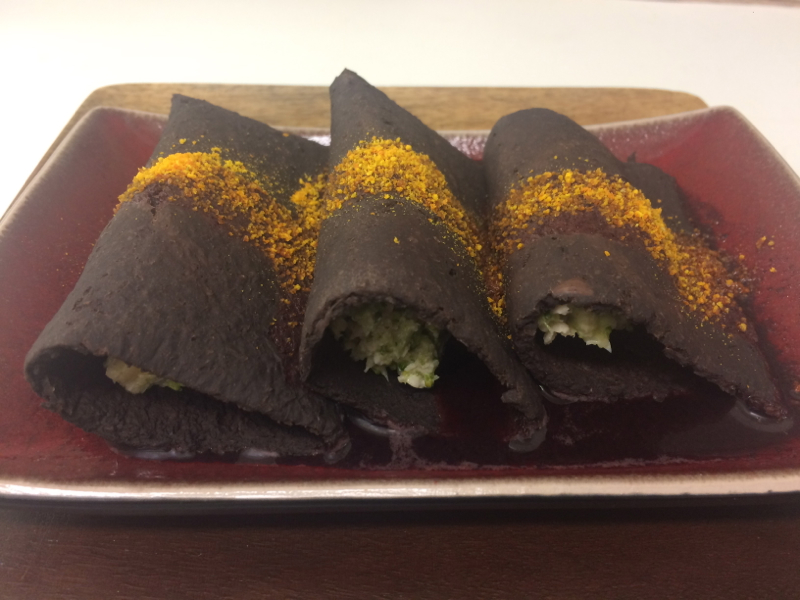 The still trendy raw food has captured many healthy eaters as well as intrepid chefs seeking a challenge. Kenney admits that he stipulates preparation of “the most advanced, flavorful and realistic raw food anywhere“. If you are new to raw foodism, you will at least adore the beautiful photographs by Miha Matei and try some soups and salads.
After a full week of soaking, blending, chopping, forming, dehydrating or chilling I was so exhausted, that I must admit that just looking at the book now makes me tired. Rediscovering some of the ingredients, seeing them as more fluid well beyond their traditional usage, was as rewarding as were most of the dishes.
Now in February, the chef is launching yet another ‘planturistic’ project, this time in New York. O0+Co organic vegan pizza (named after the fine milled pizza flour) is his next plant seeded in your mind to switch the animal produce for a meat-, dairy-, and honey-free meal.
Eating healthy gourmet food comes with a high price tag. Many ingredients used in the raw cuisine are quite expensive, pine nuts, macadamias and some spices like saffron are pricier than the same amount of cheese. To celebrate these special ingredients, share them with others. The chef spotted it perfectly: “a good meal should never be eaten alone“.