You can find jars of orange confiture all over France. Fait maison or home-made marmalade is hugely popular, yet does not guarantee the best taste. The quality hugely differs. Some have a too runny texture, others are too bitter, and most are just too sugary. In Britain, traditional marmalade making is honoured in annual competitions of amateur, artisan as well as professional entries. Dalemain Marmalade Awards in Cumbria, backed by the prestigious London-based grocer Fortnum & Mason, is one of the most lauded of the sweet preserve rating organisations. 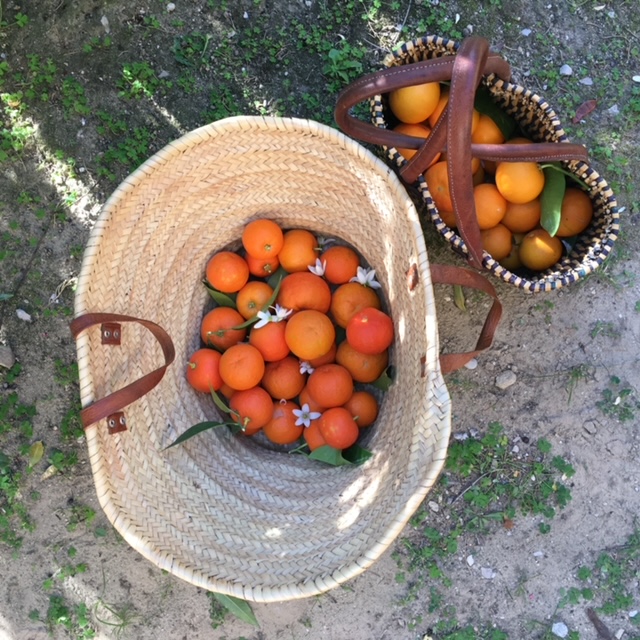 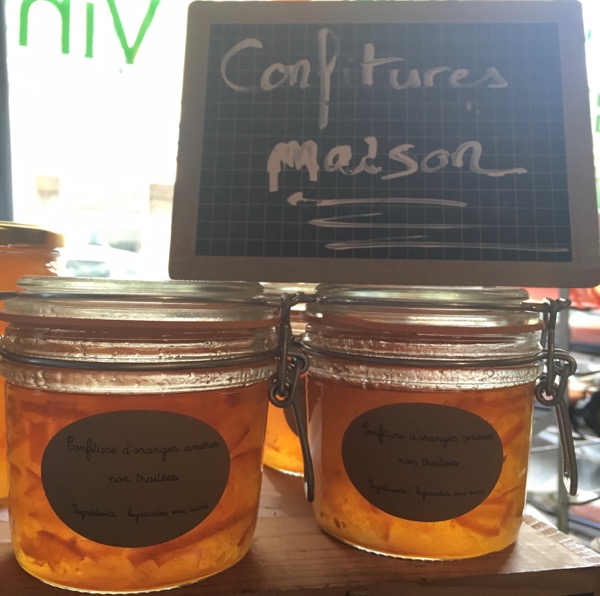 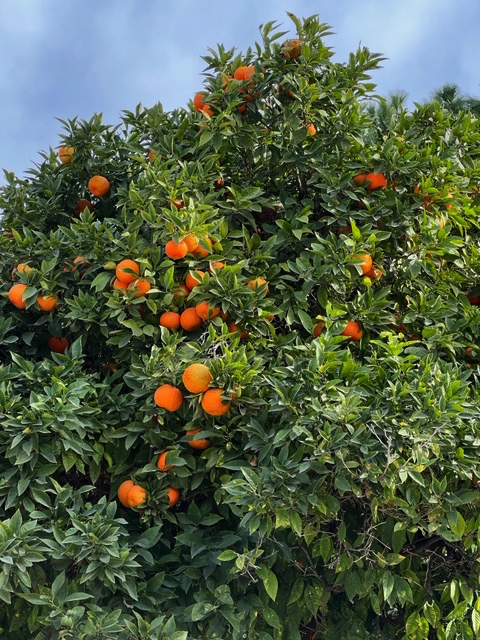 Myself not a huge fan of the orange marmalade, I had to be converted by hand labour between three continental hands – a Canadian, Czech and Japanese. In this international trio, we found the perfect balance between the sweet and bitter thanks to the tuttorage of a local foodie friend Jennifer, who is originally Canadian. Her mastery is rooted in a personal experience with Vivien Lloyd, an award winning marmalade maker from England and author of a number of books on the preserving topic.
Over time, Jennifer improved the recipe she was given, and our result charmed all my family and foodie friends. A palate awakening proof of her dedication to culinary perfection. Our Mediterranean base on the border of Italy and France invited for the seasonal culinary gettogether between late January to mid February. 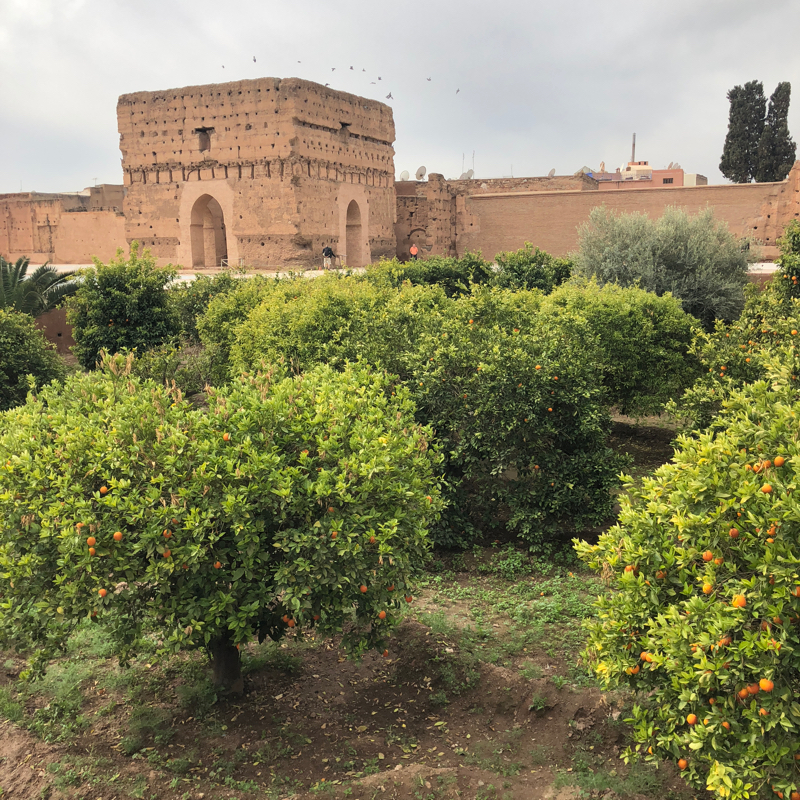 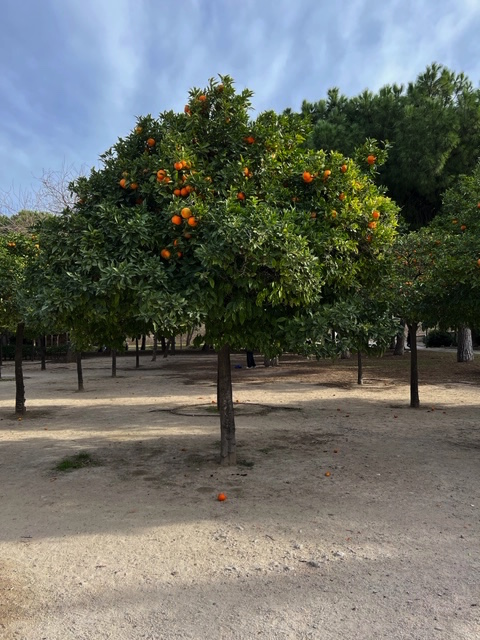 Not every orange is equal

I learned that Seville and Valencia oranges are used more often in England that has to import this sun-loving fruit from Spain. The Spanish oranges are cheaper than French and Italian, therefore on a larger scale making a fruit preserve from them is not economically viable. Nevertheless, the Italian Amalfi coast and Ligurian bordering Menton citruses are superior in terms of taste and if treated sensibly, they yield better results. If you travel through the Mediterranean during winter, you must taste the ripe navel oranges in each distinct climate, then you will understand what my palate starkly announced during the eight, wonderful years of my life around the Med. In Italy and Spain in January, while the inland Marrakech bitter orange Moroccan orchards blush later in March.

Artisan, preservative-free marmalades do not last on the shelves for years, yet the real, pure flavours of the fruit with all their inherent complexity if best quality citrus is used in its peak season, reward even the most demanding gourmands. Well, and you will eat them fast, I guarantee. The taste wins your sugar conscious cravings over.

Since the peel is also used, and I advise to use it since the aromatic compounds dwell in abundance in the rough skin of citruses, non-treated fruits should be used. If not certified organic, which in the case of small holding orchards is not financially feasible, then look for the “non traiteèe” (French), “sensa 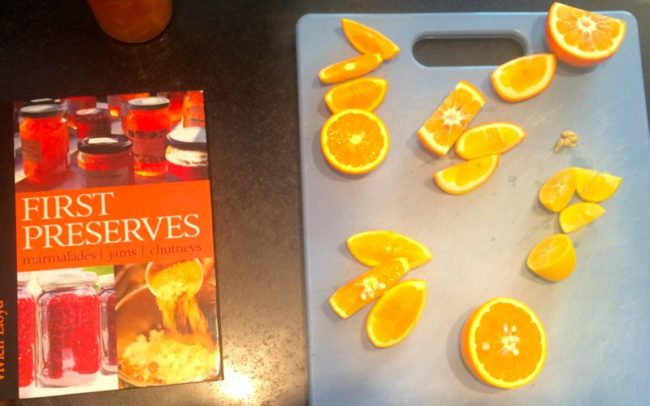 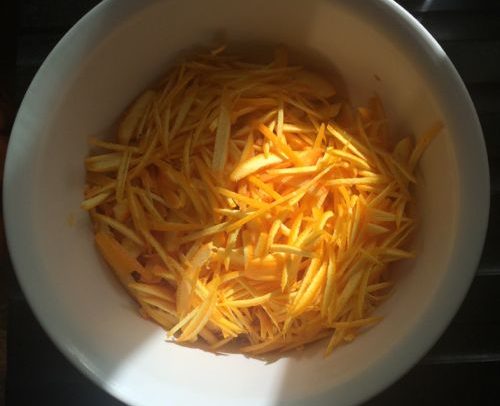 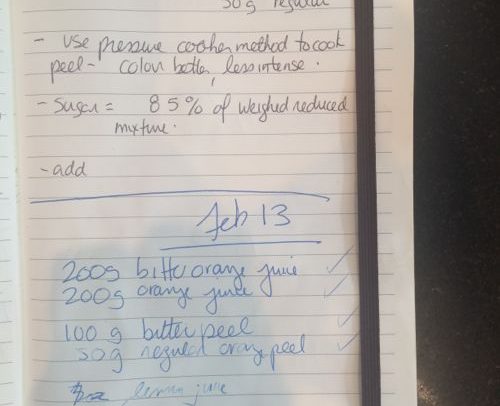 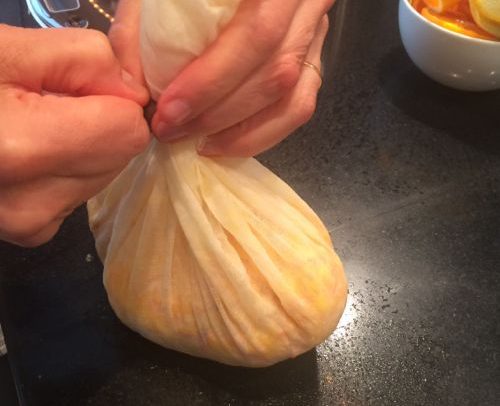 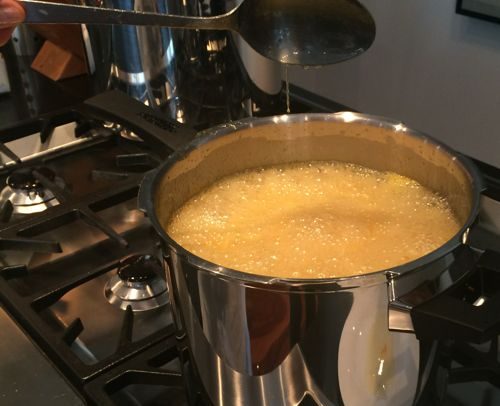 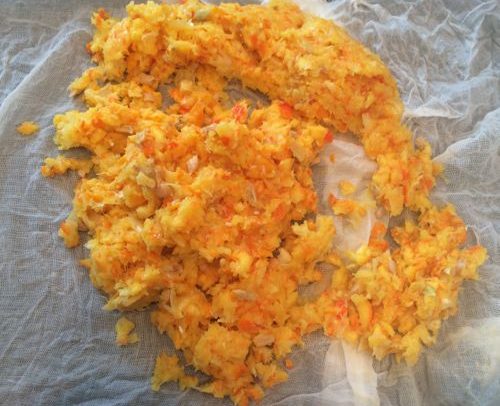 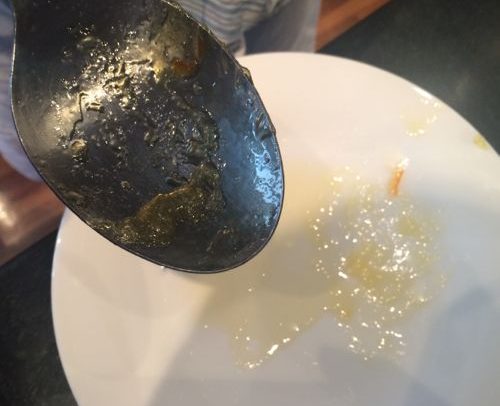 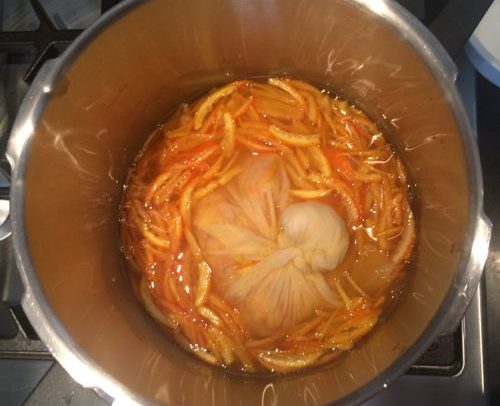 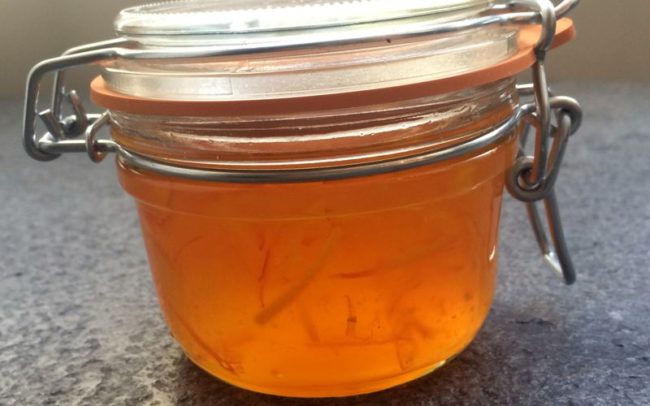 Essential ingredients
The Menton market provides superb lemons and oranges, but Jennifer’s impeccably tended garden on the sunny hills of Menton guaranteed an organic quality, which is crucial for the best results. The skin being the main ingredient, so pesticide treatments are unwelcome. Peel your fruits and slice the skins thinly. Use more of the sweeter skins if you do not like your marmalade bitter.
200g bitter orange juice
200g sweet orange juice
100g bitter peel
50g sweet orange peel
100g lemon juice
750ml water (filtered or bottled like Volvic)
Sugar 85% of the reduced weight (see bellow)
Jennifer advises that “for a less sour taste pick citruses later in the season and chose the type of orange according to the level of bitterness that you prefer”. Since both, the juice and the skin are used, taste them both.

Method:
The juice is best when squeezed the night before and stored in a fridge prior to being boiled together with the remaining ingredients. Keep the leftover pulp and seeds on a side and mix it with half of the sliced lemon and orange skins, wrap tightly in a cheese (muslin) cloth. Sterilize your jars in an oven on 100 °C for about 3o min.
Use only filtered or bottled water for cooking in the pressure cooker. This cooking method yields better colour and more balanced flavour. Add the juice, the other half of the sliced citrus skins, and pulp with skins pate wrapped in the muslin cloth, boil, and wait until the level on the top of the pressure cooker goes up. Lower the heat and simmer for about 10 minutes. Strain and squeeze the muslin cloth well to let all the jellified pectin (quite viscous) into the liquid and scrape the pectin on the outside as well. It is precious as the pectin is what makes the marmalade thick! Weigh the reduced liquid mixture and measure 85% of its weight of sugar.
Add the white caster sugar and on a low heat stir until it dissolves. Let boil, but check constantly with a spoon for consistency, turn off the heat when gel forms on the spoon. Wait and check again. The right texture should stick like honey and drip heavily off the spoon [pictured above in the photo gallery]. 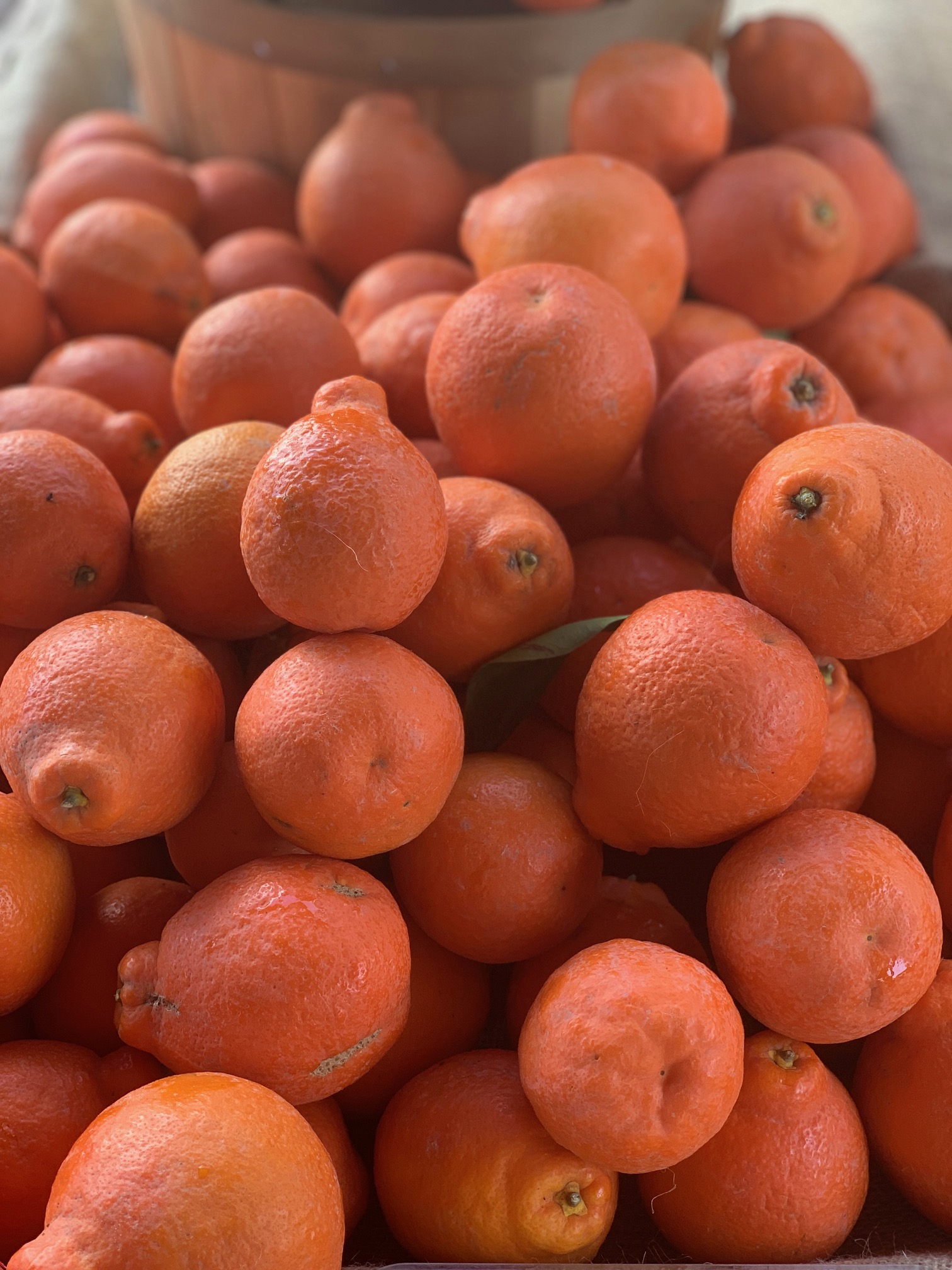 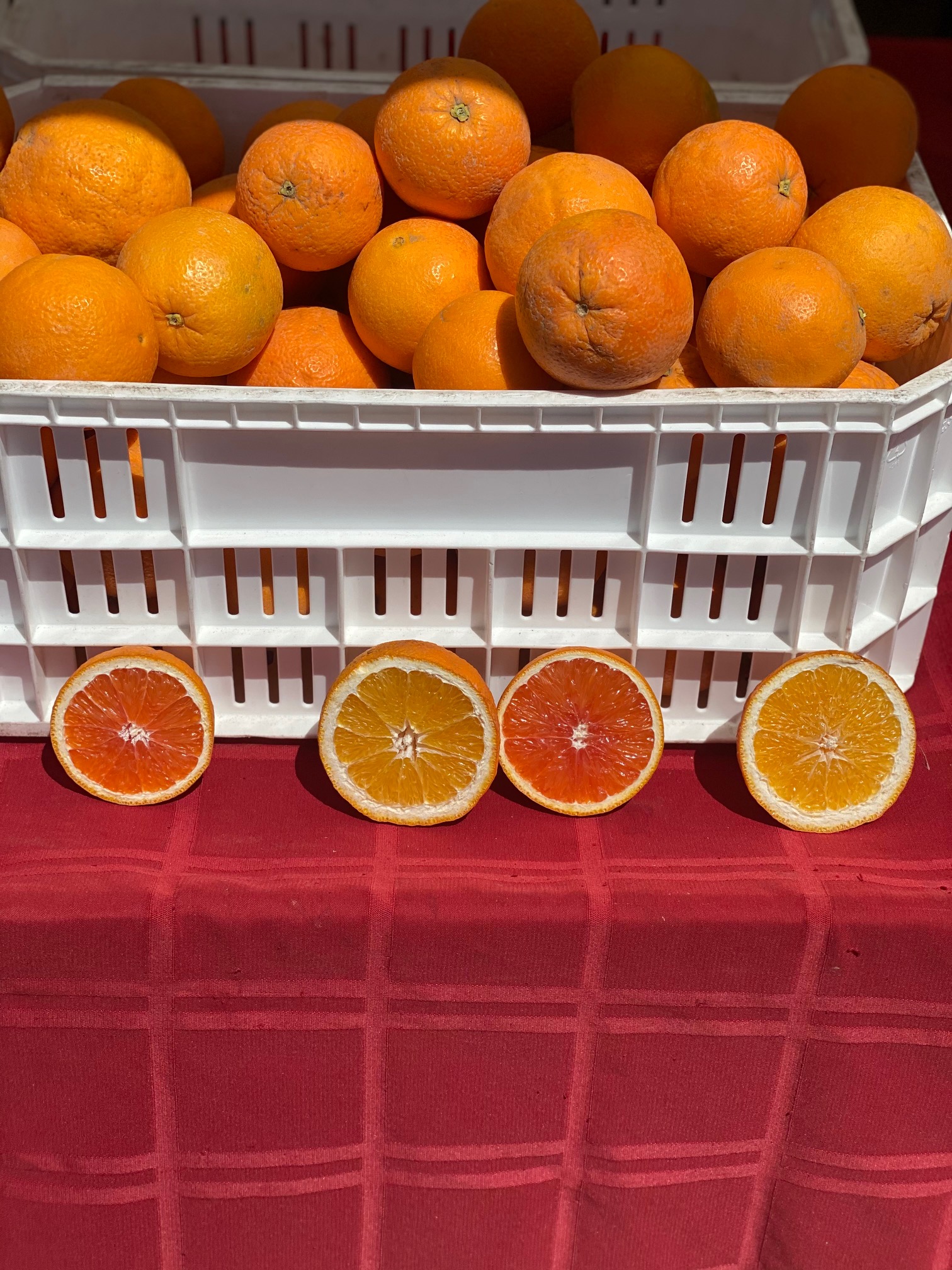 OPTIONS: For a sugar-free version you can use apple syrup from stewed apples that were strained. It also has pectin so it will make for a good texture, but will not last as long as a marmalade with sugar. Brown sugar can be used, but it alters the flavour significantly and this must be considered. This is also the reason why the top chocolate makers use white sugar instead of brown in their creations. 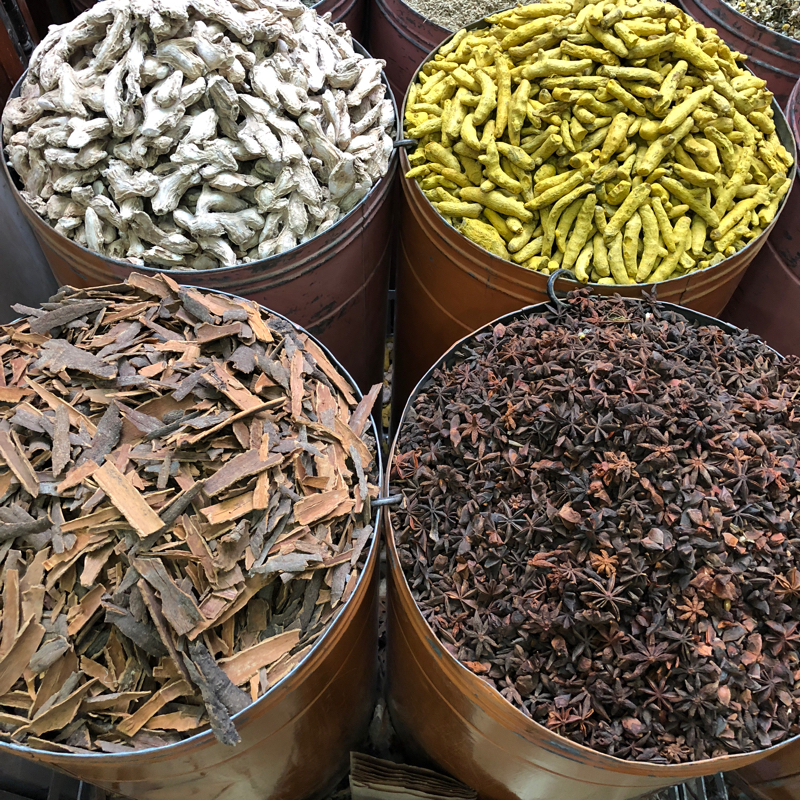 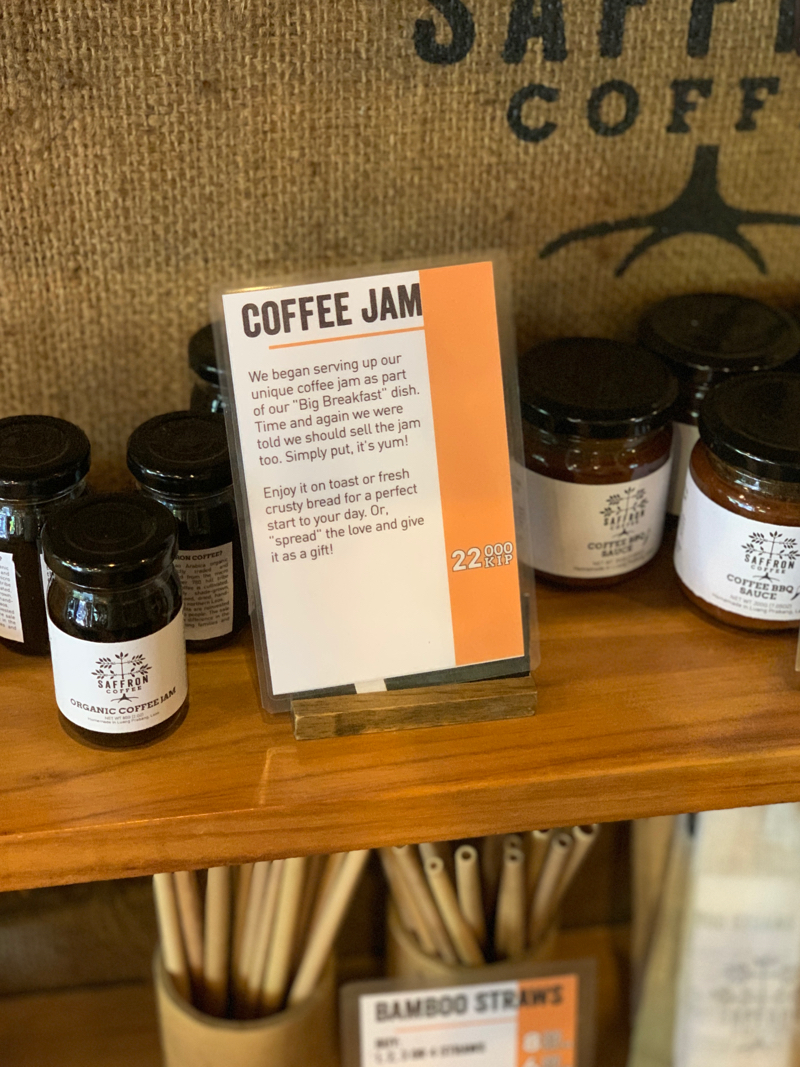 Enhance your marmalade with spices like cardamom, cloves or cinnamon sticks into the muslin cloth mixture for a more fragrant marmalade. One of the double gold “World’s Best Artisan Marmalade Maker” title holders (in 2013) a Czech breed like myself, Blanka Milfaitova made hers with bourbon and vanilla in her lemon base. She also often adds mint, lavender from Provence, nuts, dark chocolate and other spices into her preserves that were sold at Fortnum & Mason in London, where she personally delivered them from her base in the Sumava mountains in the Bohemian part of Czechia. In Laos I saw a coffee flavored jam, so unleash your creativity.

Fill the jars with still warm marmalade to the top. Skim all the bubbles with a spoon and close tight. Put the jars into a hot water bath (use a deep baking sheet or pot) on high heat for about 10 minutes (or at 125°C for 30 min as Ms Milfaitova advises). Use heat resistant gloves to take the hot jars out, cool to room temperature and then put into a cool from light protected pantry. Store in the refrigerator after opening. The marmalade should last for a couple of months if you resist not eating it all within the first weeks! Enjoy. 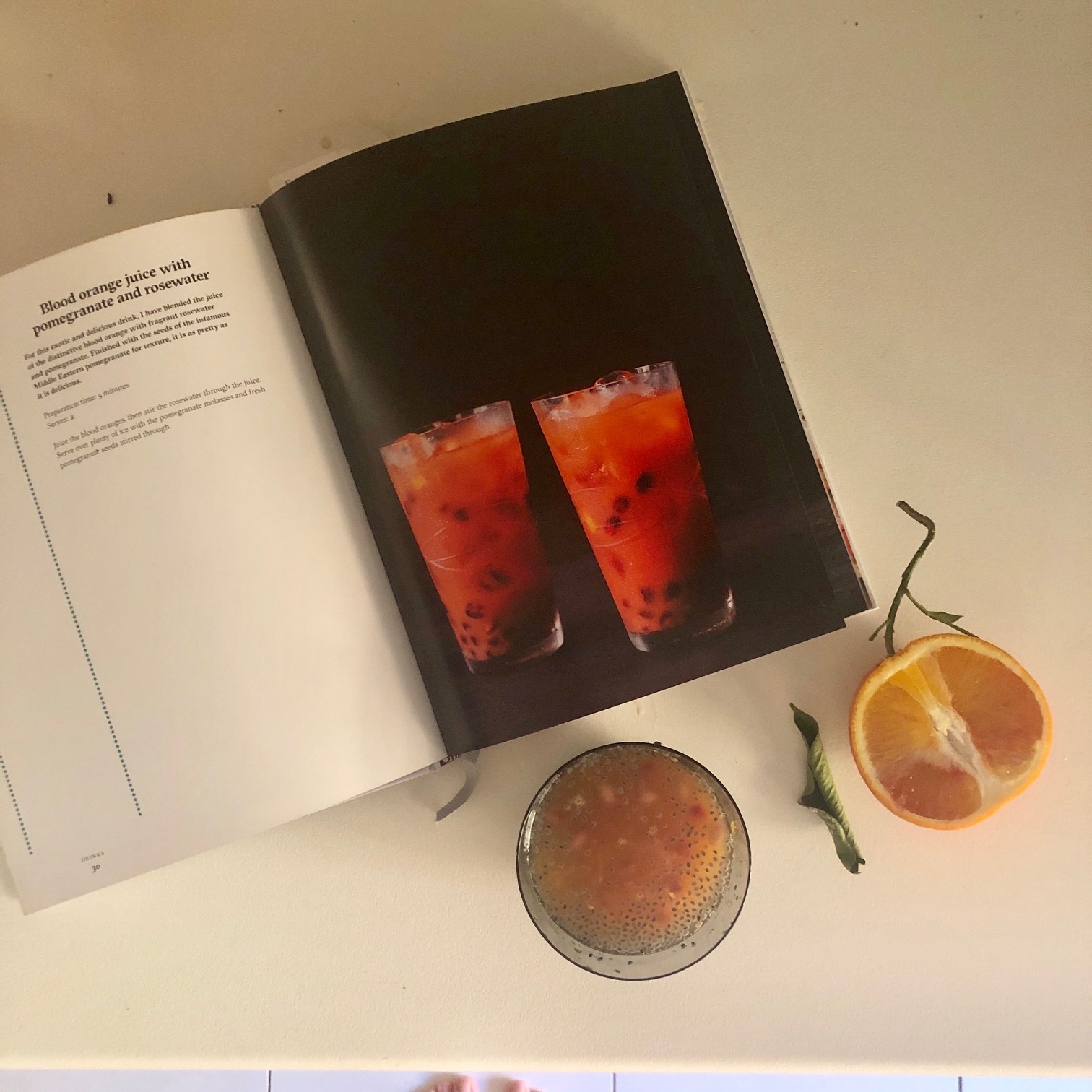 To make a refreshing mocktail from blood orange juice try this recipe inspired by The Middle Eastern Vegetarian Cookbook by Salma Hage that I love as much as my vegetarian-leaning sister does:

Add a splash of rose water

1 tsp pomegranate seeds (for sweeter touch use molasses instead)

Shake with ice and let sit for at least 10 minutes for the basil or chia to soak in the liquids.