It helps, that Toyo's chef Toyomitsu Nakayama is a former private chef of a renown Japanese fashion designer. This experience surely inspired him to serve his dishes in a dressy style, in their edible eloquence capturing the hungry eye.

A simple, yet fine entrance to Toyo in Paris announces the humble Japanese attitude that permeats the entire dining experience at the restaurant. Welcomed by a clean, sombre painting of the chef working a fish (perhaps a giant red mullet), a gift of the respected fashion designer Kenzo, who employed him as his personal chef for many years, you get a well-lit hint that style is well considered here. We became the pilgrims to Toyo’s kitchen during our bi-annual fashion trip to Paris. 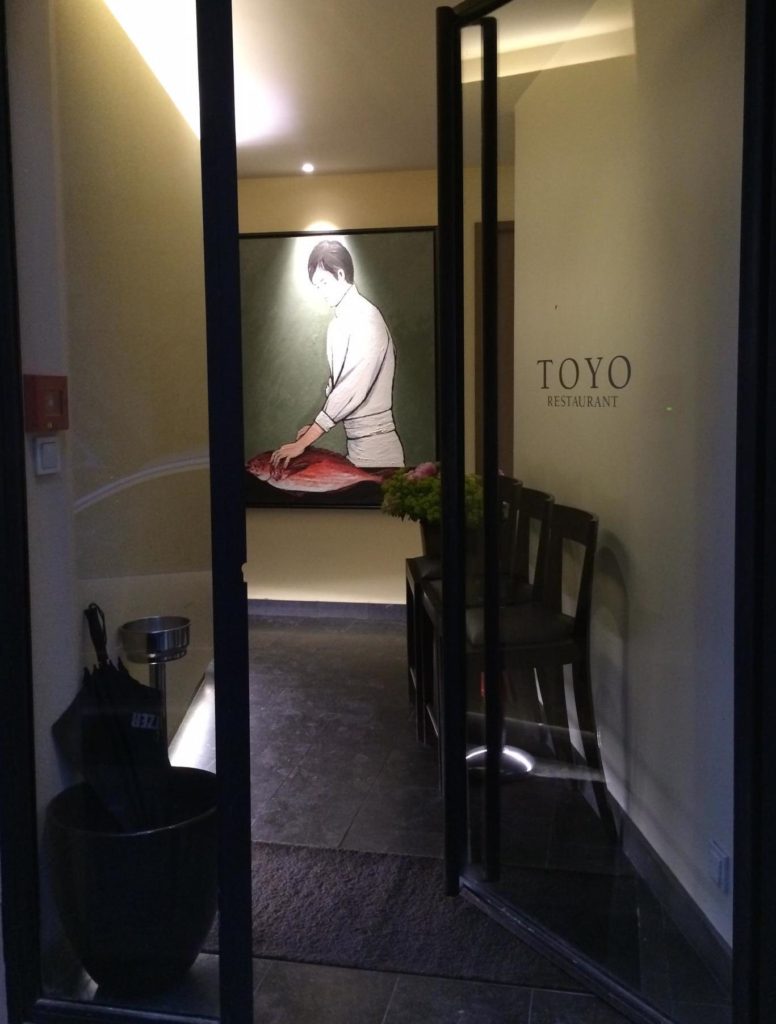 The signature style here is not about glamour, as Toyo’s interior represents rather understated fashion, but it is the precise tailoring of each plate that catch your sartorially sensitive eye. It helps, that Toyo’s chef Toyomitsu Nakayama is a former private chef of the renown Japanese fashion designer. This experience surely inspired him to serve his dishes in a dressy style, in their edible eloquence capturing the hungry eye.
You will be ushered into the first open room to the left, along the narrow kitchen counter seatings upon the right turn or if you reserve the private room at the back, you will pass the behind-the-bar kitchen activities. Most guests respect the almost monastic environment, still on some nights it can get very chit-chaty at the kitchen counter. Monday is the night of the more pronounced Japanese tasting menu, and the entire restaurant as well as the secluded private seating tend to be occupied by the many devote Japanese fans of top cooking. Mr Nakayama’s cooking is a secret gem in Paris.
Our seat is almost always at the bar as we love to observe the focused hands of the chefs behind the counter and wonder at their precise skills. The head chef is often there, and in a zen-like calmness directs all the kitchen’s activities. 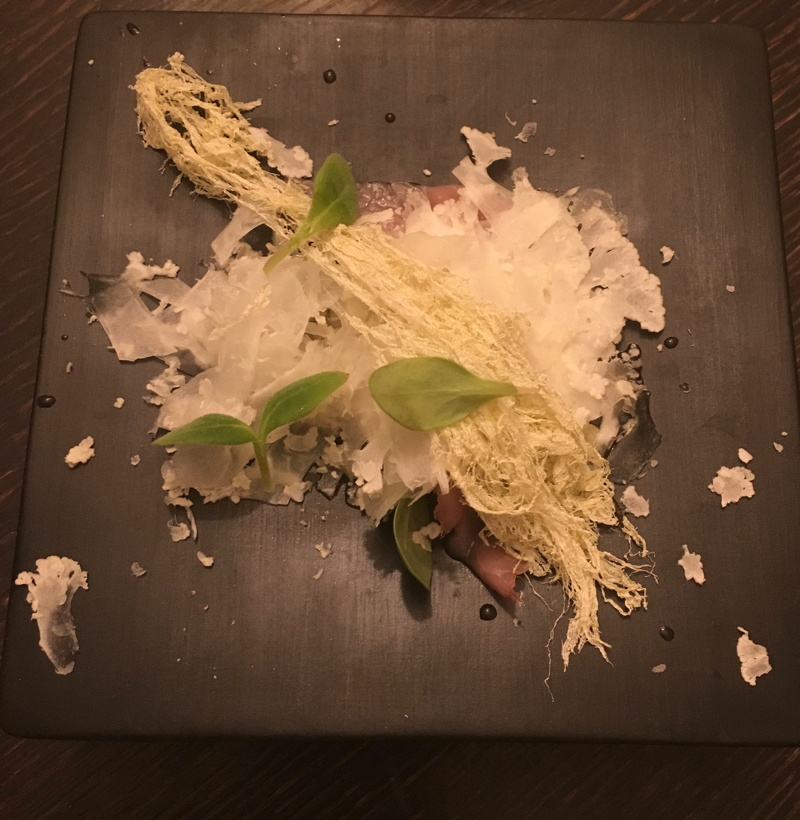 Using superb rare ingredients available on the Paris markets, Japanese specialist purveyors, and then morphing them into an œuvre d’art of creative perfection, is the philosophy of Toyo. Posted on the edges of the Latin Quarter and Montparnasse, the restaurant also pays respect to the flagship French ingredients. The entire Japanese team turns them precisely into delectable small portions, that feature on the regular menu apart from the Japan-centric Monday.
On one ocassion, the first starter of a quartet of vegetal kingdom-inspired bites included a bowl of consommé de volatile en gelée – a poultry consommé in a jelly – contrasting with the crunchy vegetables such as the purple taro and lotus chips and the char grilled roots. There is no English menu, so I am adding the French originals for your ease. 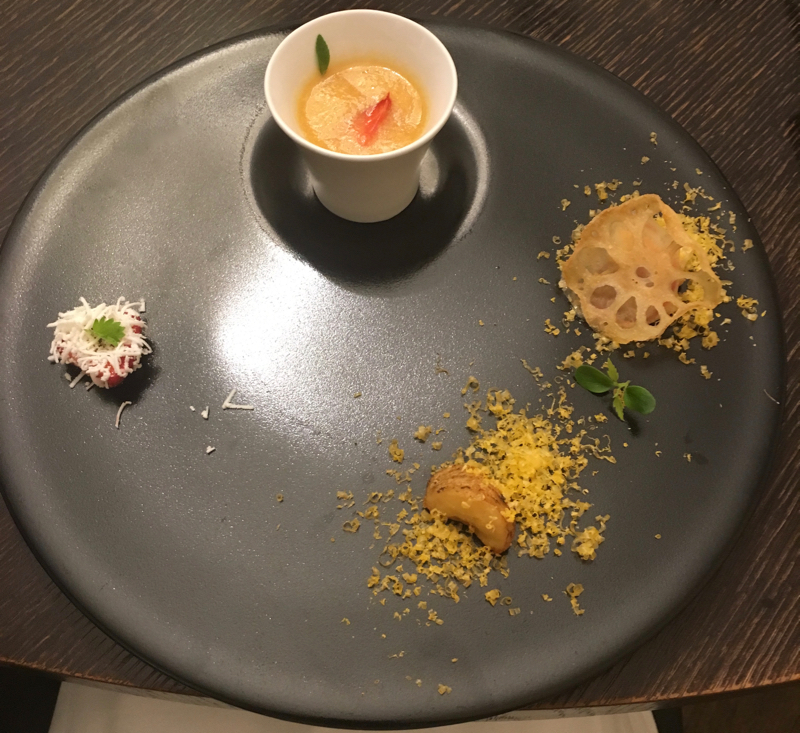 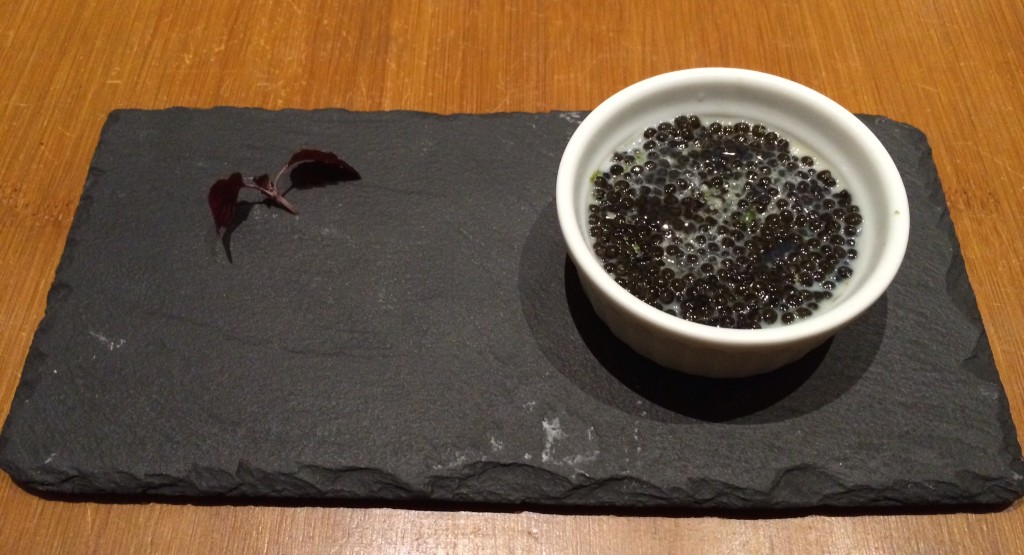 The cooking reflects the year’s seasons, but generally the chef uses generously several species of mushrooms and fresh herbs next to the fleshy fish and seafood. He also retouches the French staple ingredients such as foie gras, veal or beef and presents them in a new, much lighter form. Both, chopsticks and the Western cutlery assist with these dishes.
Toyomitsu’s craft is a refined blend of French and Japanese cooking skills and ingredients, randomly perfumed with luxurious delicacies such as caviar. Adding extra €15 to the fixed dinner menu (€95) brings in the exquisite Flan de soja with Caviar. The flan is more decadent than most of the other plates. To tame it’s fatty texture, sip on a white wine with a high acidity such as Riesling. The softness of the caviar gently popping in your mouth becomes even more smooth when combined with the custardy texture of the flan. 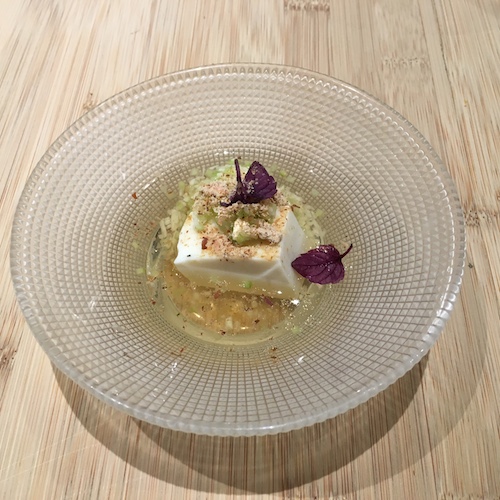 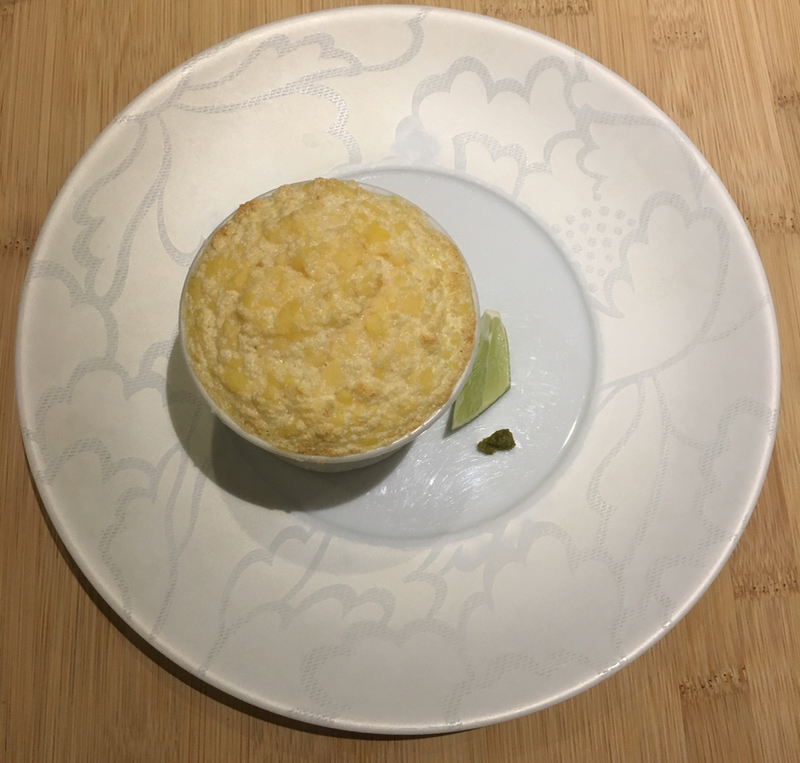 A French white bread served with butter reminds you that you are not at one of the Tokyo’s sushi or kaiseki restaurants, but in Paris, where the bread is always fresh, crunchy on the surface and sticky inside. Our amouse bouche was a fresh and light Salade d’anguille fumée et Brandade de Morue. A daring plate of a smoked eel salad with salted cod that was not as challenging as it sounds, but sublimely delicate. 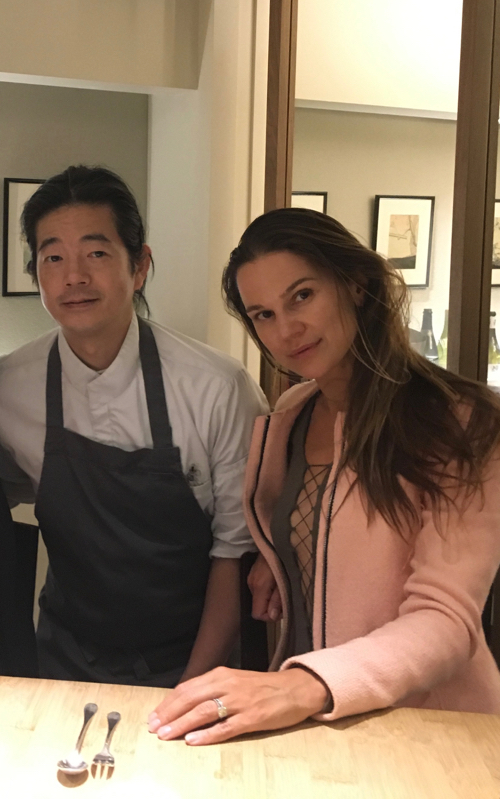 My second starter the Saint Pierre juste brûlé spoke the Mediterranean language – drizzled with olive oil, a side of chopped olives ‘tapenade’ and a John Dory fish cooked very carefully so its white flakes remained tender. Most of the plates are finished behind the bar counter, so it is fun to sit there and experience the show of culinary tricks. The Bar en Croute de Sel et d’herbes is one of the chef’s specialities. It is usually prepared only for two people, but when possible it can be made for one. The bass is cooked in a green-coloured herb salt crust that is cracked and the fish is deboned in front of you. The sea bass like the John Dory could match up to the best Mediterranean preparations. 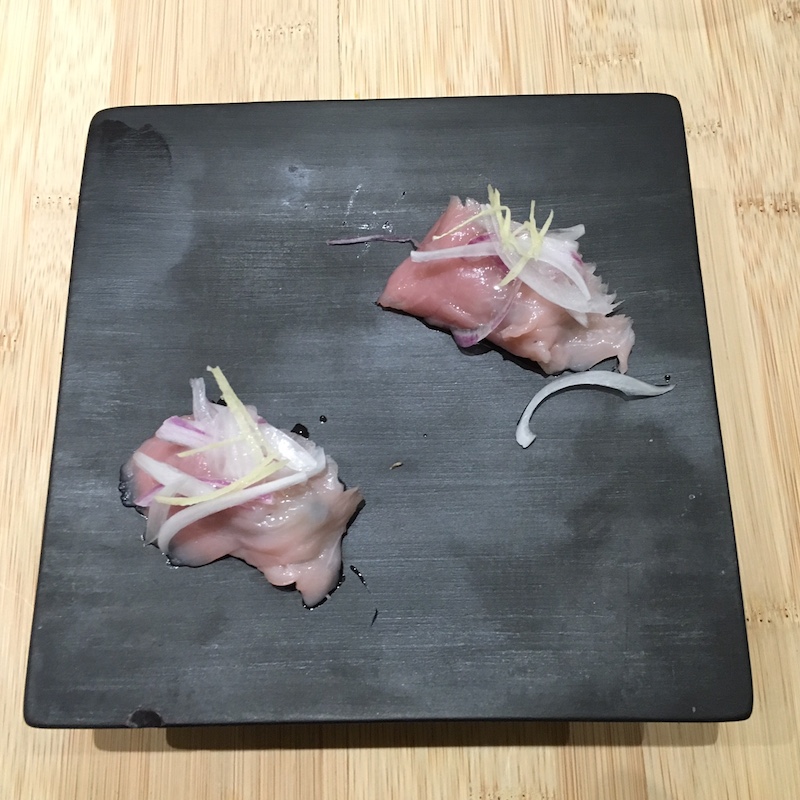 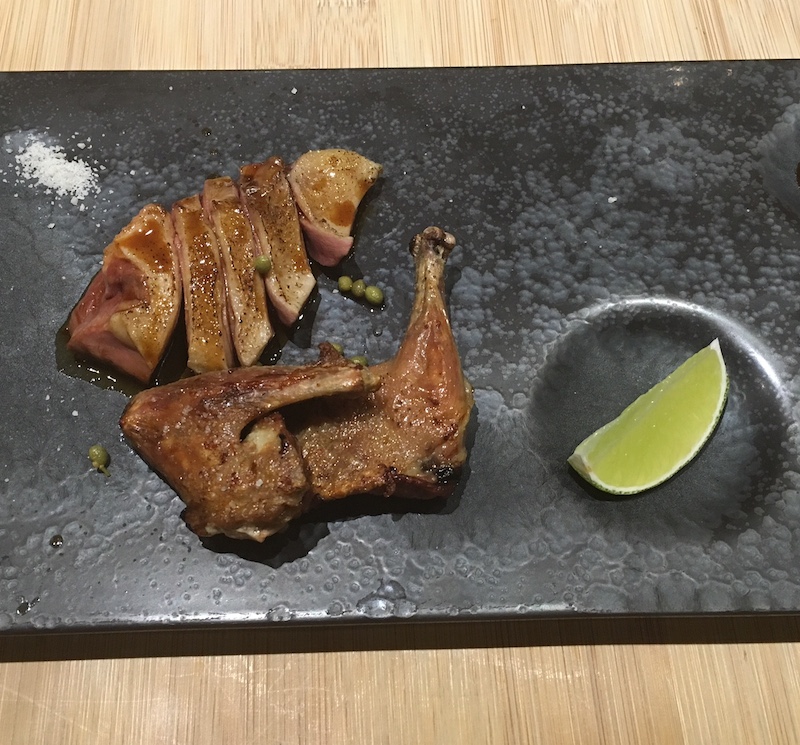 My partner relishes the Carpaccio de Veau, the veal carpaccio sourced from the best butcher in Paris, Hugo Desnoyer. This young cow meat is the pinnacle of the chef’s mastery. The tenderest veal was served on another occasion on a morsel of a Japanese eggplant during one of the Japanese Mondays, and I was immediately in the game for meat at Toyo. Another plate, a fried pan-crusted beef, just stirred my appetite for flash. In a style of a izakaya, the tempura-like Filet de boeuf pané, was hearty yet focused. Pigeon is not my kind of bird, but my husband took to the adventure. Entrusting his taste buds to the chef was rewarded with a perfectly Grilled pigeon served unconventionally with a moon of lime and soy sauce. 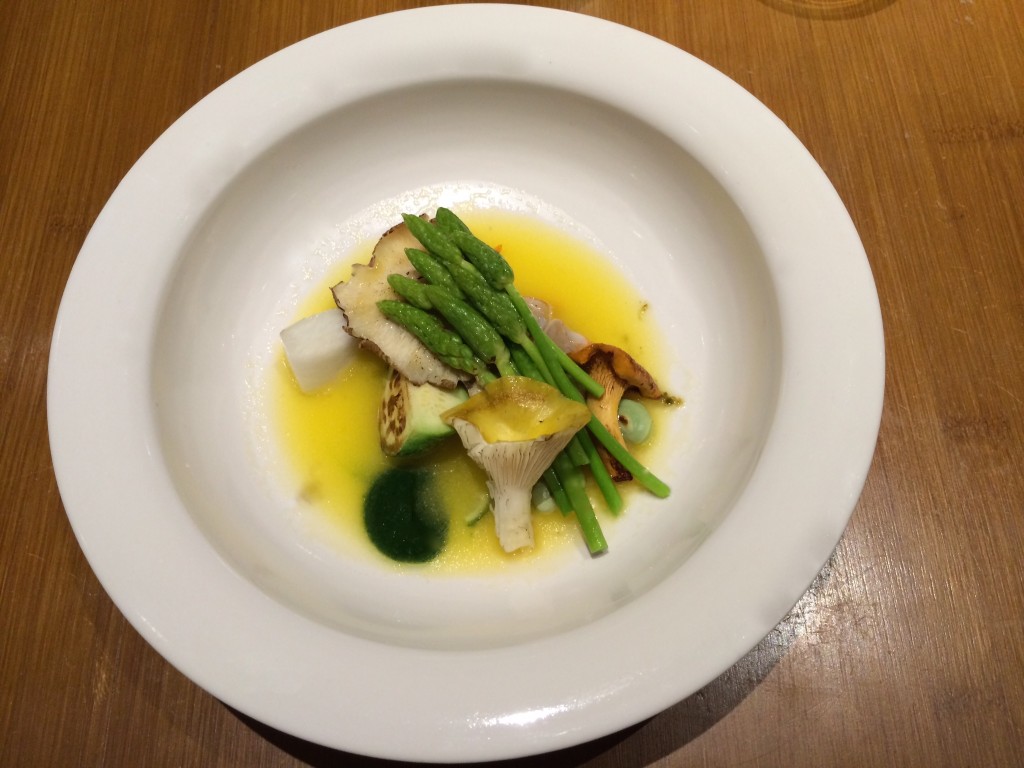 The fairy lightness of the previous courses carried along the Coques, asperges sauvages et Champignons, perhaps the most artistically enchanting plate for me. In it, wild branches of crunchy asparagus refreshed the unshelled, playfully chewy shellfish and the assortment of forest mushrooms crowned the culinary creation with an earthy depth and clarity. The mushrooms were seared to perfection as a tepanniaki in front of us.
Yet another signature dish of the restaurant is the rich Curry façon Toyo et Lotte Panée, a monkfish curry. The chef decided to underline the strength of the meaty fish with a concentrated curry sauce. A red wine pairing (Bordeaux, Rhone) is on call, but an intensely flavoured oaky Chardonnay or a spicy Gewurtztraminer work just fine. 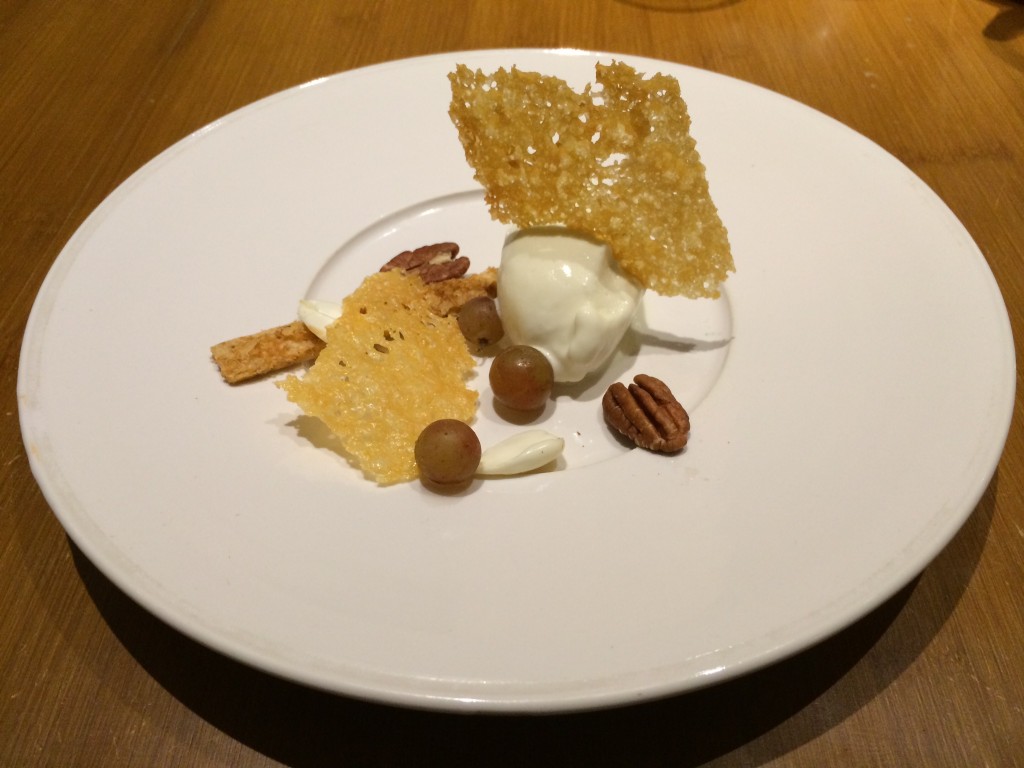 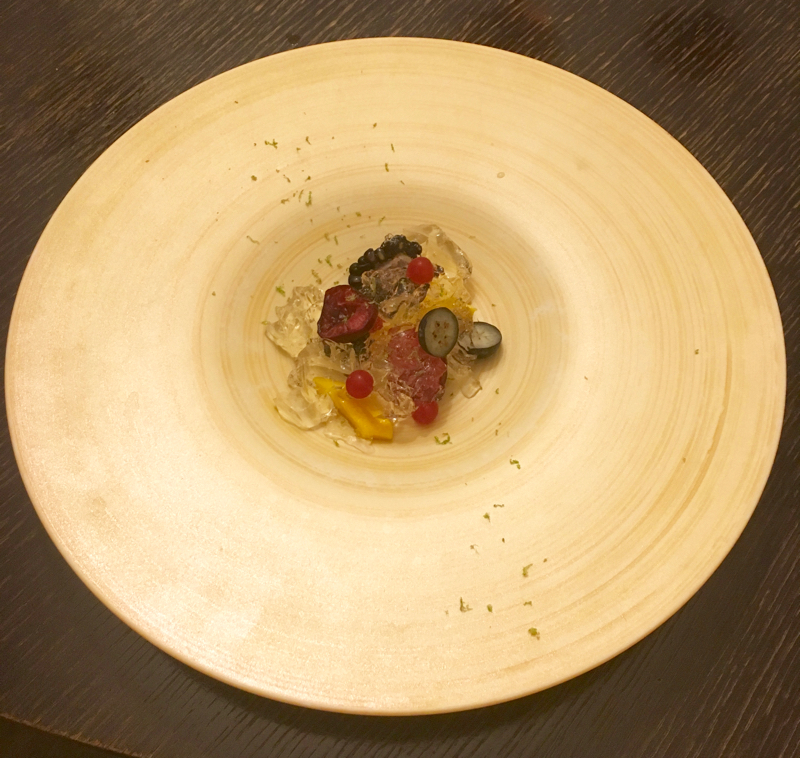 The desserts are mostly airy light, and fit into the tightest belts. Sorbet Gorgonzola concluded our first gastronomic night at Toyo with fireworks. The savoury yet sweet blue cheese sorbet combined with pecan nuts and fried parmesan cheese crisps was richly creamy, and at the same time less heavy than a regular cheese plate. Wonderlicious! A Peach soup with refreshing ice-cream was another summer sweet treat, while the custardy Green Tea Tiramisu, delicate yet thick, served with berries on the side, called for a cup of tea. An intense dessert for Toyo!
If you dine at Toyo often you might get bored by the repetitiveness of many of his plates, yet there is often a little tweak in each dish and that familiarity played with a new seasonal tune is intriguing for any sophisticated foodie paying attention to small details. I got his cookbook, attempting to emulate his artful plates at home in the Mediterranean, yet the mastery of Toyomitsu Nakayama is hard to match, so most of my plates were vague messengers of his attentive cooking style. Further the art of plating implements Japanese aesthetics, a slight organic tweak may surprise your perfection seeking eye, just do not forget to spoon the food out and put it in your mouth where it belongs, not on a canvas.. 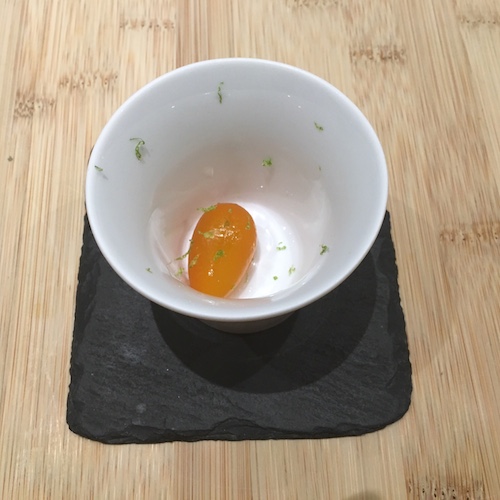 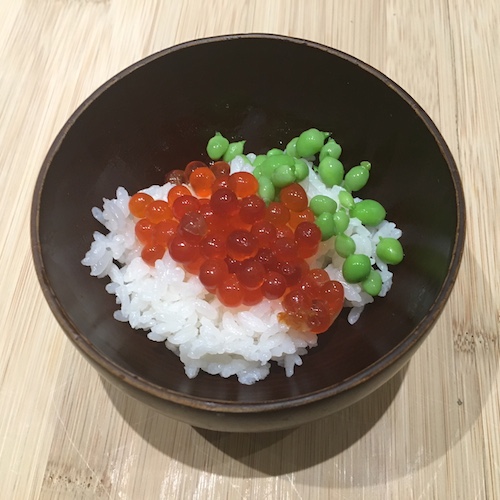 There are some nice champagnes to elevate your mood, but the Shaman by Marguet we were recently poured was a pleasant unsettler. A great start. The wine list is focused on French bottles, but the choice is sufficient. There are three whites and three reds by the glass that are chosen well to match the dishes on a given night. The sommelier is passionate, always a good sign to trust his choices. The bottle we love is the red Burgundy Gevrey-Chambertin 1er Cru “La Perrière” by Philippe Pascalet. I hope they have a large supply of this savoury an light Pinot as the Beaune by the same producer is much bigger to match the finesse of the chef’s cooking. The Savigny les Baune 1er cru is not a bad option either. Still, any Burgundy will do. 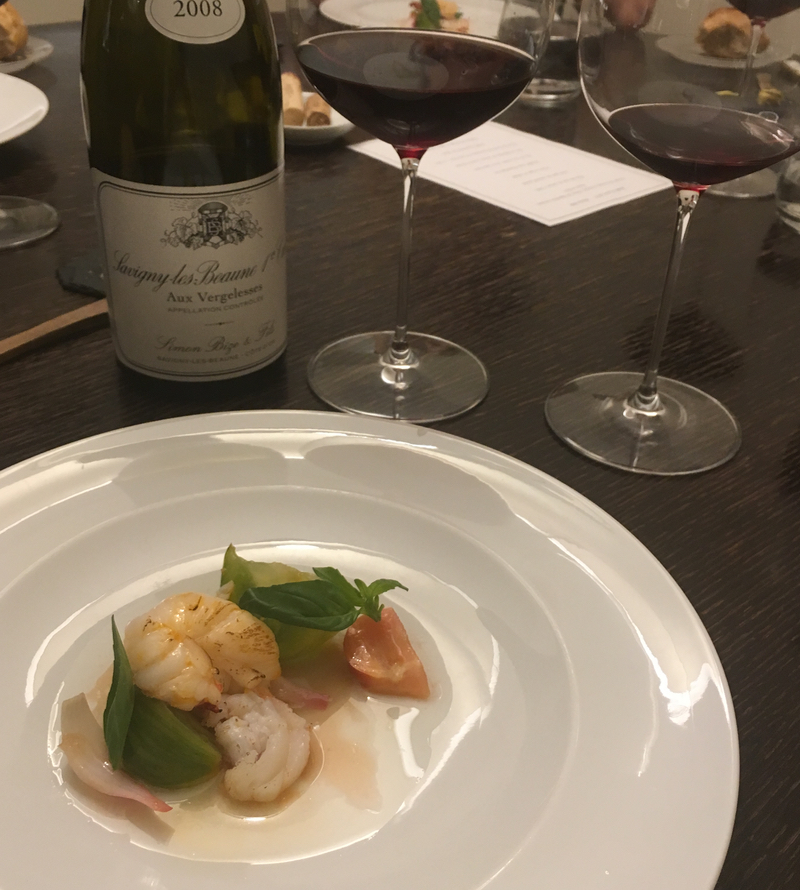 Japanese award-winning whisky Yamazake, saké and tea from the popular Japanese purveyor present in Paris – Jugetsudo – complement the drink selection for the less vinous population. A homemade Kumquat, ginger and lemon infusion was served at the end of the meal of the Monday Japanese tasting once, and we adored the preserved sweet kumquat in our cup, that I couldn’t resist to eat after drinking all the liquid. Toyo inspired me to make it at home.
17, rue Jules Chaplain, Paris 6ème.
+ 33 1 43 54 28 03.