You will feel like eating at home, and fed very well, no cheating and tiny portions. The slowly raised sourdough bread is succulent and the butter so intense, that it recalls the Brittany cows grazing richness. A white and whole-wheat slices are served, with their crust bending like the elastic, honest bread of my Czech grandmother's.

The renaissance of farm to table dining in the 20th century America hailed from the opening of Chez Panisse in 1971 in the university town of Berkeley. Less than half an hour drive from San Francisco “environmental harmony and delicious flavour” were unified in the restaurant co-founded by a young, francophile chef Alice Waters. More than that, she put the names of her ingredients’ purveyors on the daily changing menus!
The legendary food activist cum chef does not need much introduction. The author of eight publications and frequently awarded Waters is now the Vice President of Slow Food International, founder of Sustainable Food Program at the American Academy in Rome and Yale Sustainable Food Project, as well as the mind behind The Edible Schoolyard and the School Lunch Initiative in the US. 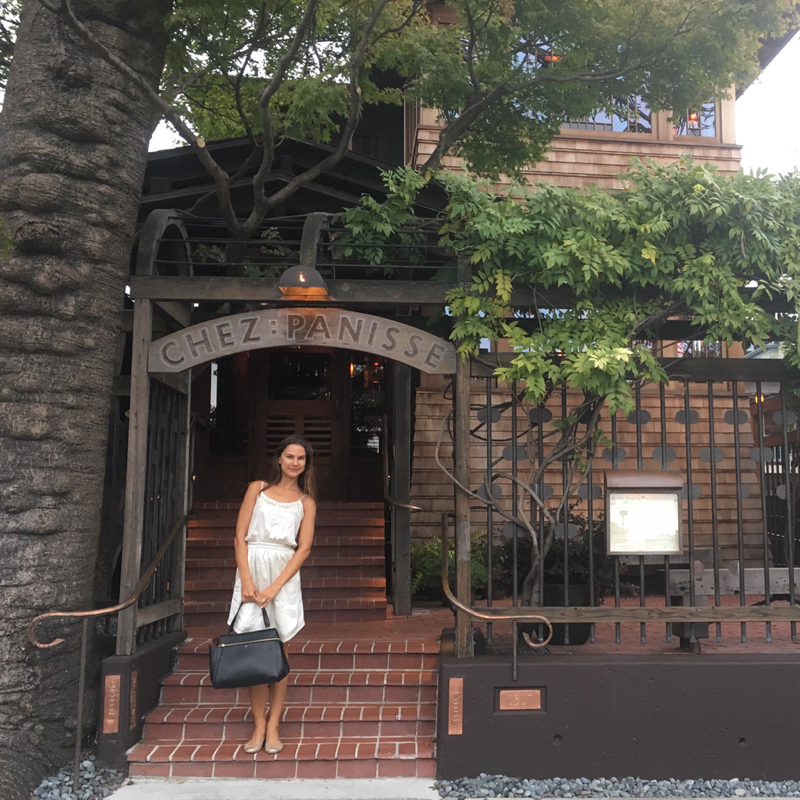 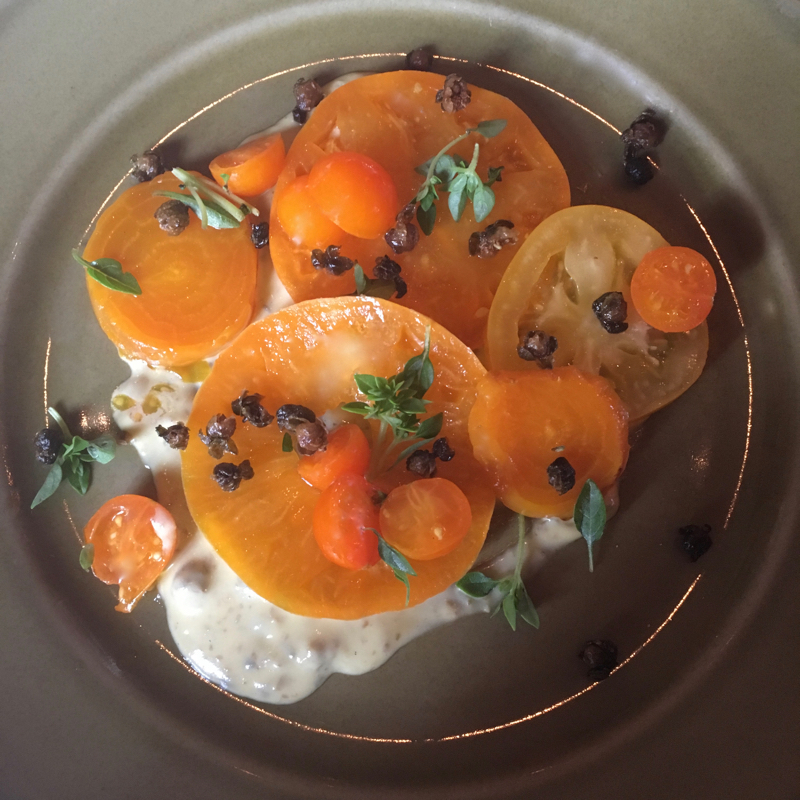 The café bistro (upstairs) cum restaurant was inspired by Honoré Panisse, a character in Marcel Pagnol’s 1930s movie trilogy about life in Marseille (Panisse was sailmaker frequenting a bohemian local café). Waters sees this gesture “as an homage to the sentiment, comedy, and informality of these classic films”, and you will spot plenty of posters from Pagnol’s movies on the enveloping walls.
Renovated right after recent fire about three years ago, the wooden building’s original architect Kip Mesirow added a Japanese pagoda-style facade, and reshuffled the dining rooms. The salvaged red wood was cut by the eco-minded wood artisan Paul Discoe (he also designed San Francisco’s Perennial), renowned in the Bay area hands-on design sphere. Inside it feels very cozy, and the competent and friendly staff is quite fairly divided between the two genders. The head chefs at both parts are yin & yang, a male and female, but the pastry hands were assigned to two women Mary and Carrie. You will feel like eating at home, and fed very well, no cheating and tiny portions. The slowly raised sourdough bread is succulent and the butter so intense, that it recalls the Brittany cows grazing richness. A white and whole-wheat slices are served, with their crust bending like the elastic, honest bread of my Czech grandmother’s. 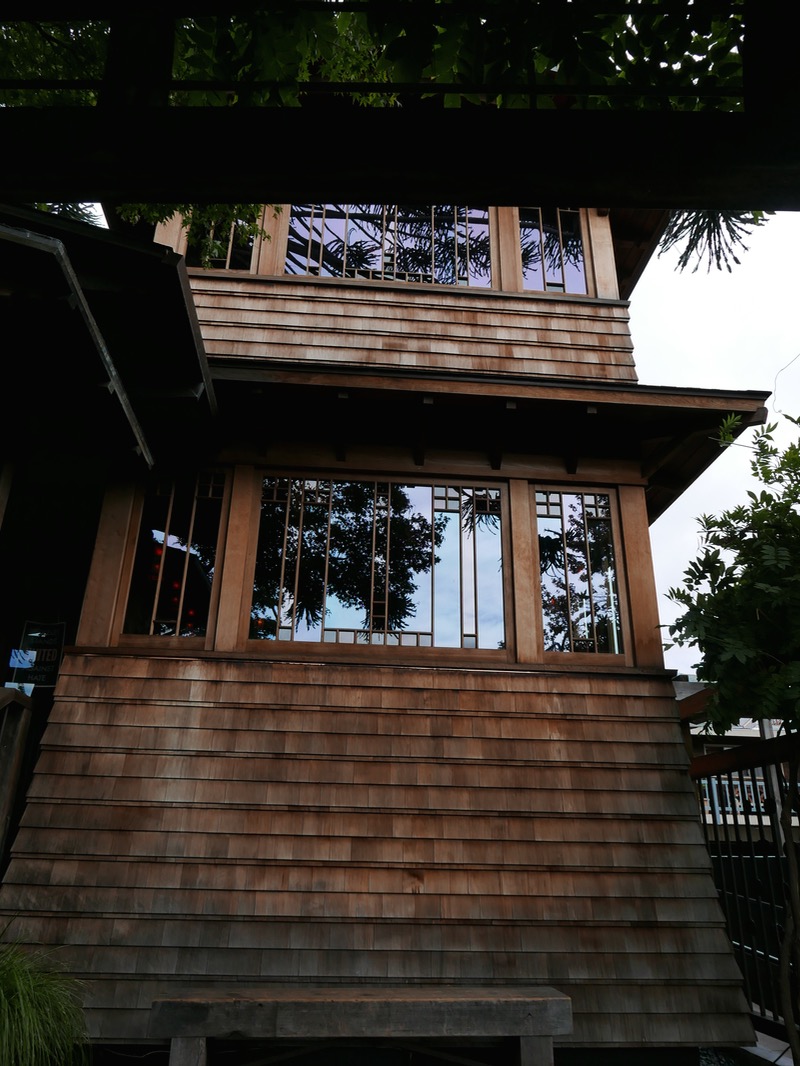 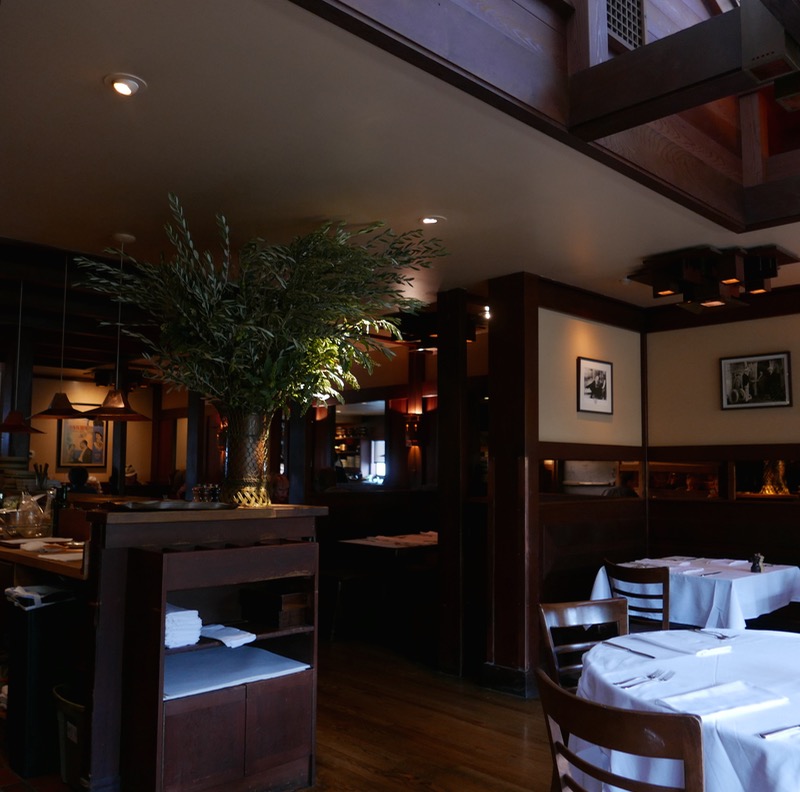 Local provenance rules the entire restaurant. The dinnerware is sourced from Heath Ceramics based in the nearby Sausalito, and the rustic, countryside evoking cotton clothes of the staff are made by Dosa.
Perhaps to reflect on the Berkley University intelligentsia frequenting their locale, a sophisticated jazz music sleekly taps in the background in the dimly lit and by wood warmed interior. The bar in the centre of the corridor long restaurant separates the café’s two main dining areas. 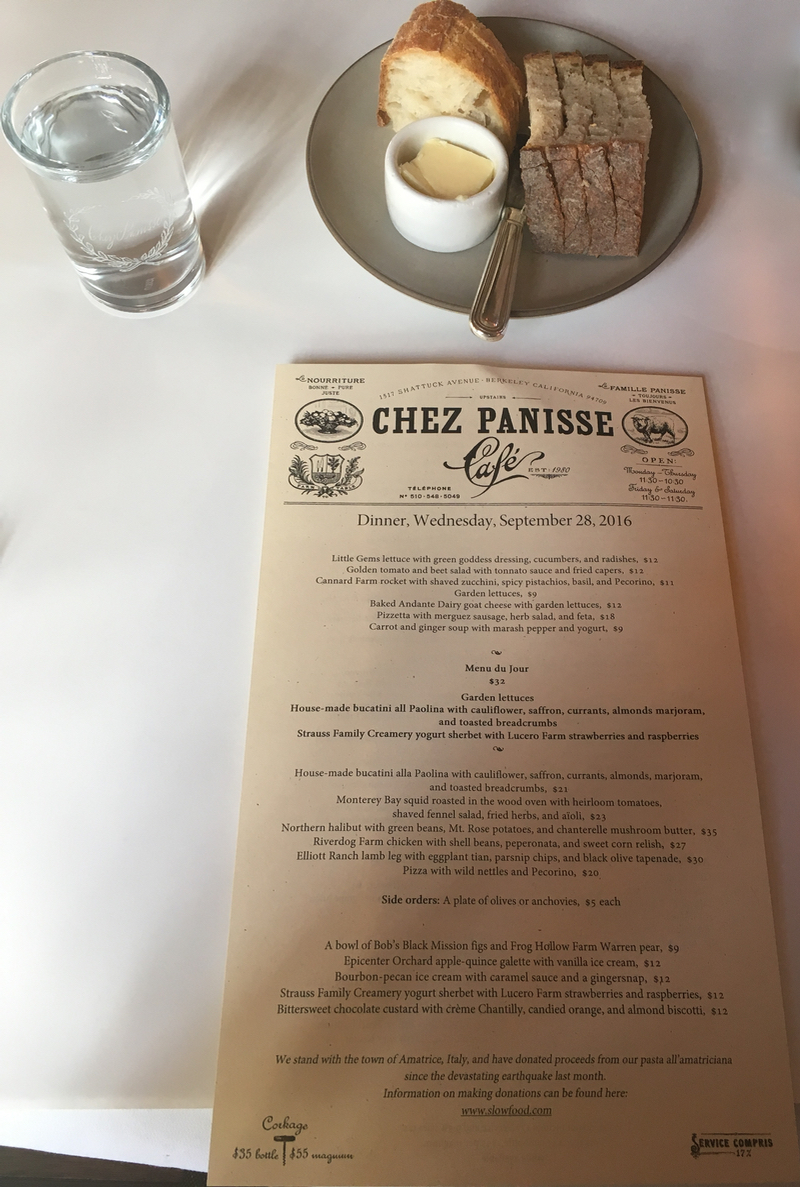 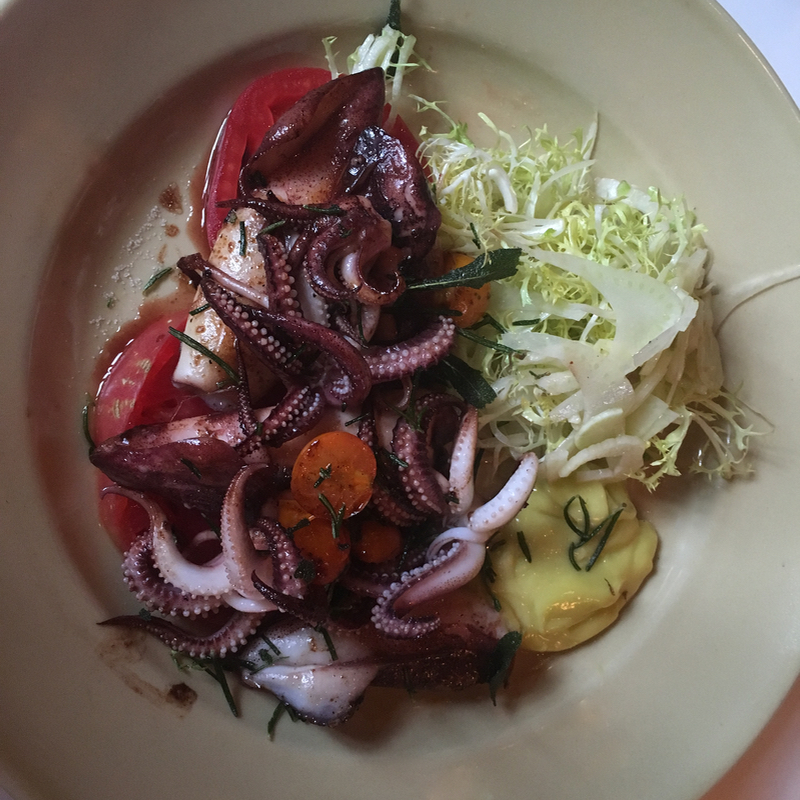 Waters’ revolutionary approach to California cuisine has a humble foundation. It is based on the freshest ingredients from personally selected purveyors. The sustainable, organic, and seasonal produce from local farms, orchards, and fisheries is turned into original but still earthy Mediterranean plating at both dining rooms. There are two separated kitchens. Downstairs is the smart multi-course set dinner restaurant, that still after four decades in operation has to be booked weeks in advance. Yet, my first encounter with the Chez Panisse cuisine was at the more casual café, where dining à la carte from the daily changing offering is available. Opened in 1980, the more casual Chez Panisse Café also has an affordable three course daily menu (“Menu du Jour“) for $32 and you will rarely dine on the same dish at Chez Panisse. The staples include an hors d’oeuvre pasta with seasonal variations, a daily version of pizza and pizzetta. Our second meal the pizza was vegetarian: preserved red peppers with a scant handful of cheese, very crispy yet dry to my taste, but my husband loved it. The thin crust 00 flour pizza baked in a wood-burning oven in the open counter kitchen, and there is also a charcoal grill where late evening popular offer of Steak-frites sizzles. 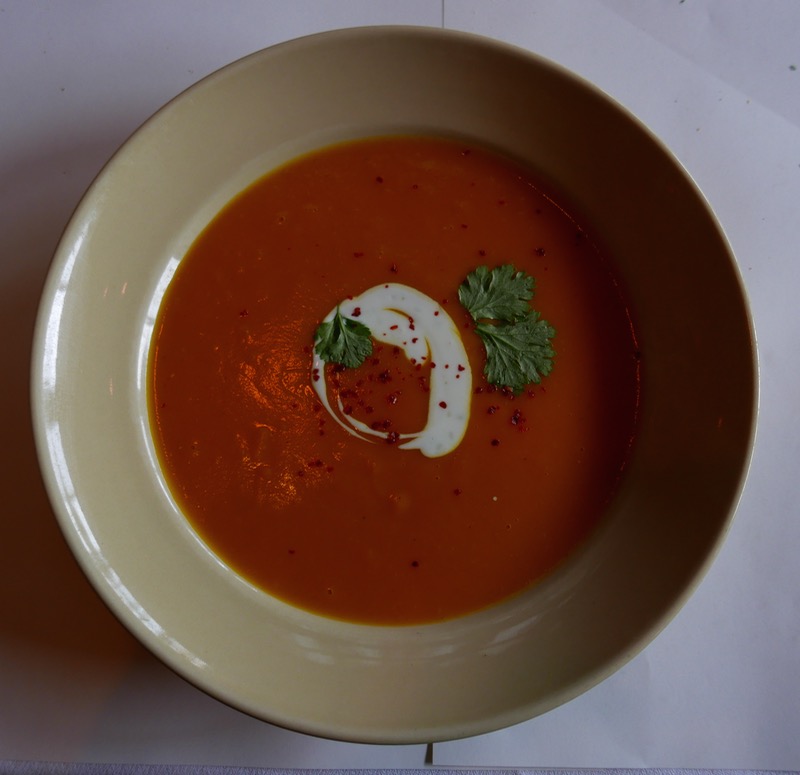 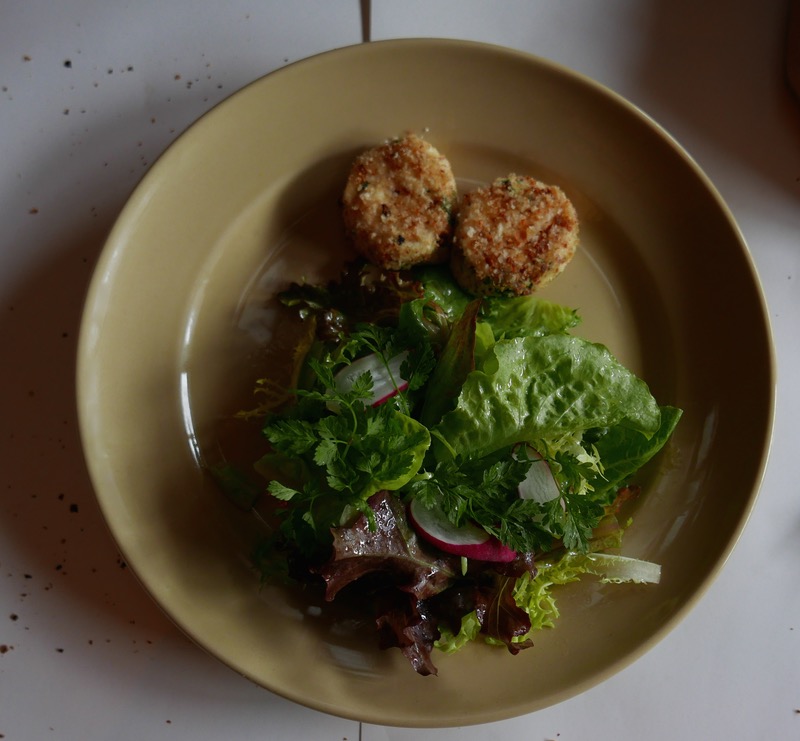 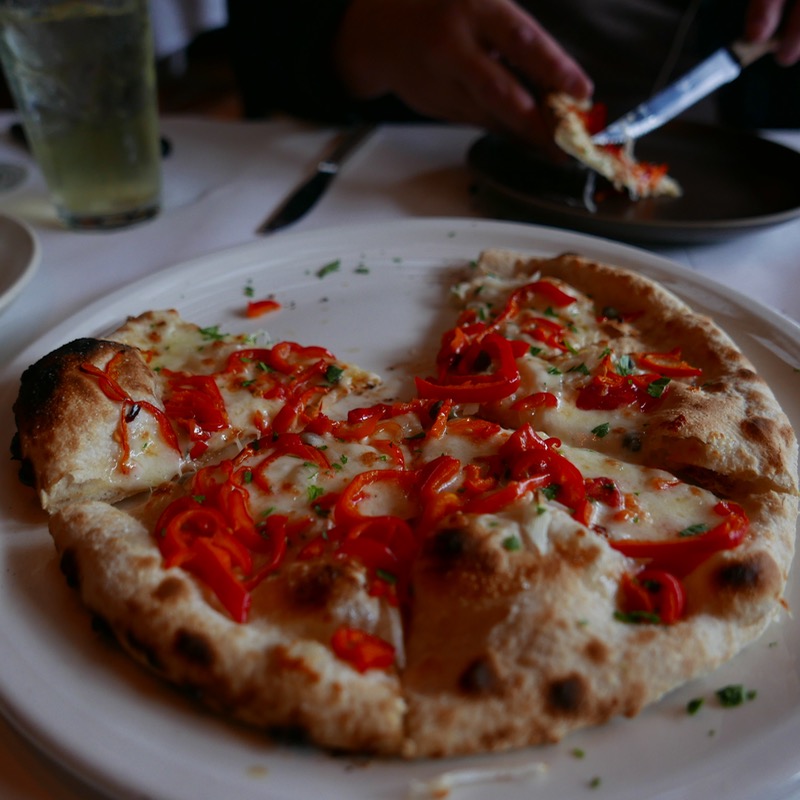 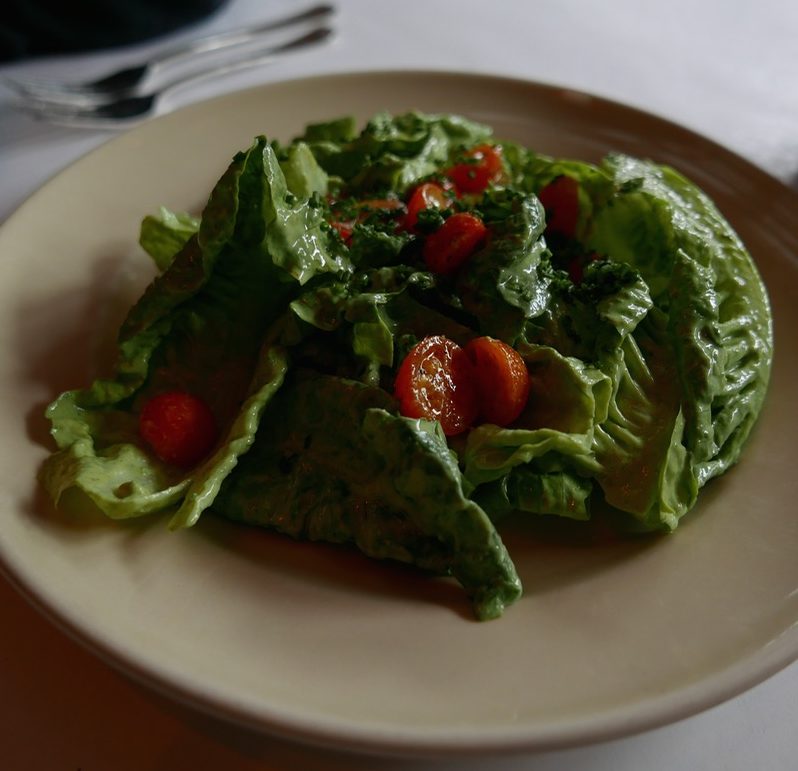 After entertaining my palate with the exquisite bread, that was too similar to my grandmother’s homemade loaf, I chose to start with the Golden tomato and beet salad with tonnato sauce & fried capers for my early fall dinner dinner. The Italian tonnato sauce of mayonnaise and tuna spread thick under the veggies was very rich, yet balanced with the acidic tomato slices and sweet cooked golden beet. The simple white plate was sprinkled with tiny leafed basil and decorated by halved baby ball orange tomatoes. Nice with white wine like an oaky Chardonnay from Macon, France. Always on the menu is the Baked Andante Dairy goat cheese with garden lettuces sourced from their own farm. I tried it on my next visit to Chez Panisse, and must nod to its balanced European lightness over the usual California, put more to make it shout. Most veggies except some special seasonal findings and herbs like basil are now sourced from the Chez Panisse farm.
The main course is only slightly larger than the already substantial starter, so do not spoil your appetite with too much of the superb sourdough bread as I did. Too good to leave alone! I was recommended the Monterey Bay Squid roasted in the wood oven with heirloom tomatoes, shaved fennel salad fried herbs and aioli. So came the large plate of three stretching, tender and delicate squids with separately cut tentacles. Topped by fried herbs including sage and rosemary, on the bottom large slices of succulent red tomatoes, roasted baby orange tomatoes, and a perfectly crisp shaved fennel mixed with yellow frisée salad on the side, this was a wholesome dish. The aioli rich and lemon rind yellow sauce was just too oily and heavy for me though. I actually needed another bite of that bread! 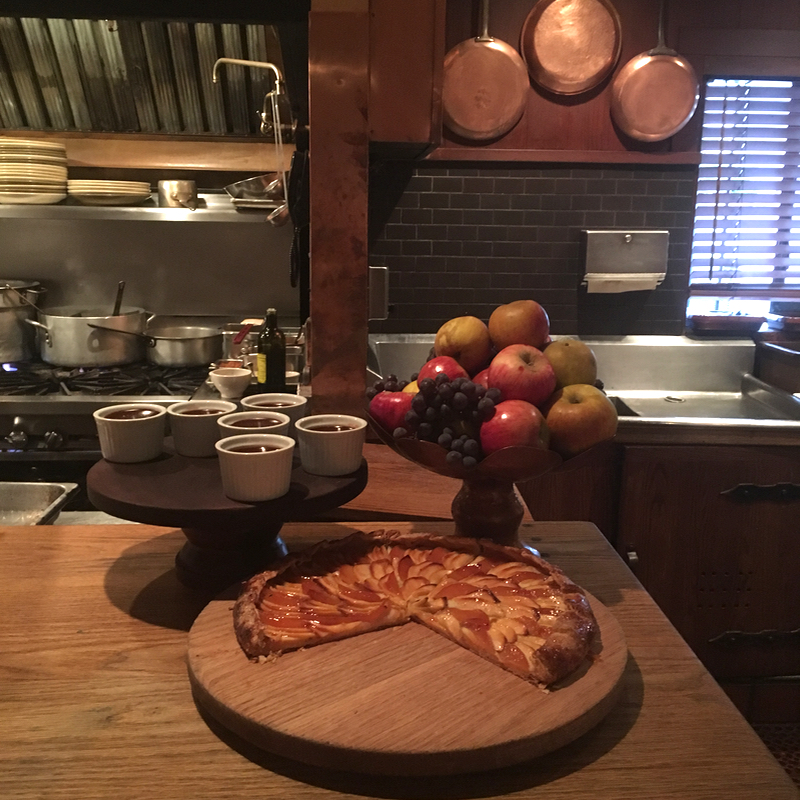 You can go light with the dessert. Seasonal fruits are served in a a brass bowl with fork and knife, so you still eat it in style. I had Bob’s Black Mission figs and Frog Hollow Farm Warren pear. Yes! Even the humble pear and fig have their farmer’s names attached. The fruit plate at a restaurant reminded me of the French seaside restaurants that I frequent. Just the French skip the names. The shrivelled, almost dry and ultra-sweet dark figs with a whole yellow pear were served on lotus leafs. I loved them. 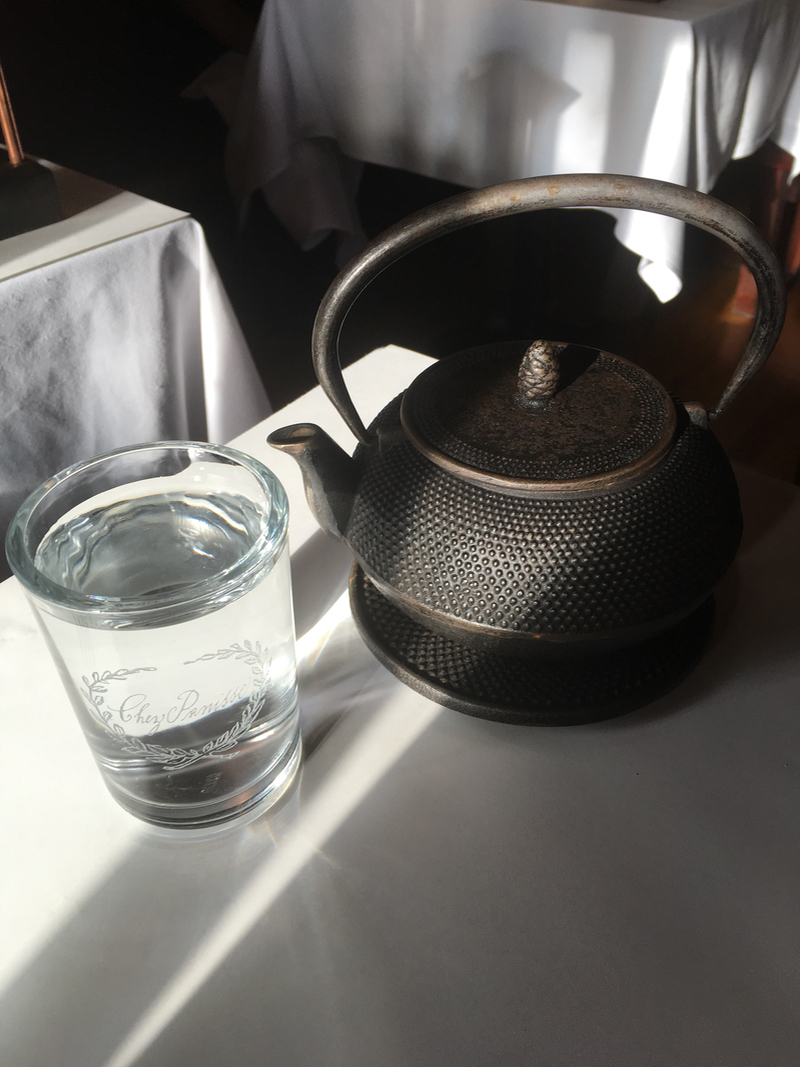 The wine list changes daily, but majority of the offerings are the old world staples, some of older vintages. Interesting California wines are also featured. The Wine List’s Reserve pages might please the serious connoisseurs with some interesting North American bottles. Most wines are served also by the glass – California, Oregon, Italy, France, Manzanilla sherry, and Madeira from Savannah Rare Wine Co. They even have an exclusivelly made Chez Panisse Zinfandel by Green & Red Vineyards in Napa.

Sightglass coffee from San Francisco that is also served at the Museum of Modern Art, is brewed at Chez Panisse. Organic teas and tisanes for the zen minded or as a perfect after dinner pacifier. My favourite rare Silver needle white tea was served in cast iron Japanese pot, steeped properly. Water is poured sustainably from a glass jar, and important gesture in the drought stricken California where water should not be wasted.