At the London Chocolate Show you can sample an immense diversity of chocolate and chocolate products, admire sculptures and chocolate fashion, spot the hottest trends and meet the creators in person.

Smudging deliciously brown the sweet teeth of chocolate lovers, the London Chocolate Show, tempts through chocolates made in Britain, but also from Denmark, Italy, Spain, and as far East as Hong Kong and Taipei. The Chocolate Week, that has been for twelve years celebrating fine chocolate, peaks with the annual London Chocolate Show. Seductively introduced to the consumers, the cocoa-centric produce from the most exciting cocoa bean growing regions is joined by highly entertaining on-stage chef demos at The Chocolate Theatre and the madly popular Chocolate Fashion Show, widening the pupils in the curious eyes of the onlookers.
Here is a sneak peak on the lip-smacking fashion show. From cocoa-dusted brooches and other jewels, some pinned in the long hair, while others snaking around the sleek necks of the welcomingly colourful models, to white, milk and dark chocolate weapons carried by a Medieval man resembling model, all were made from the sweet delicacy. 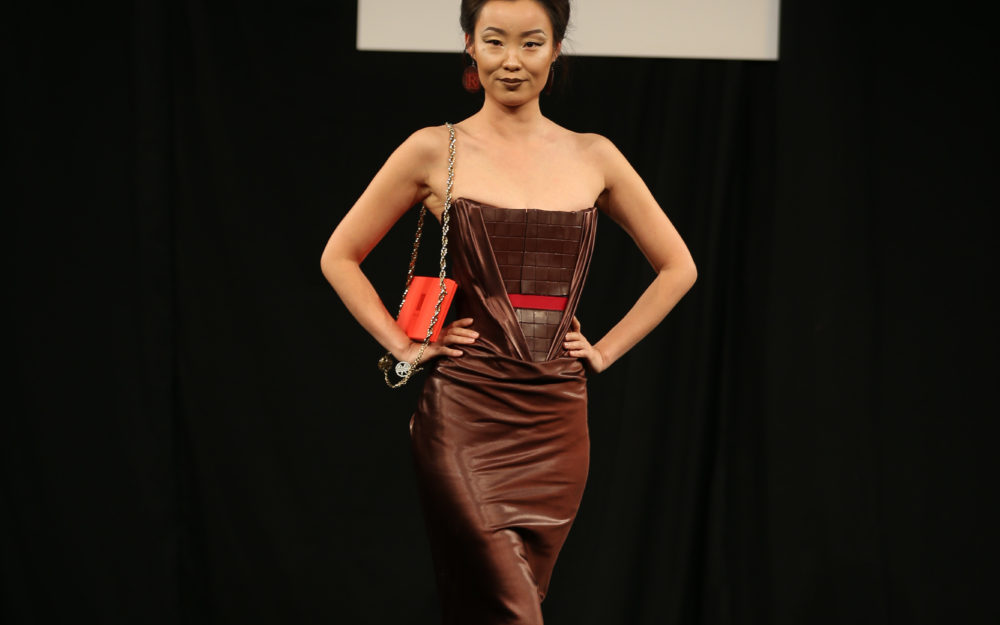 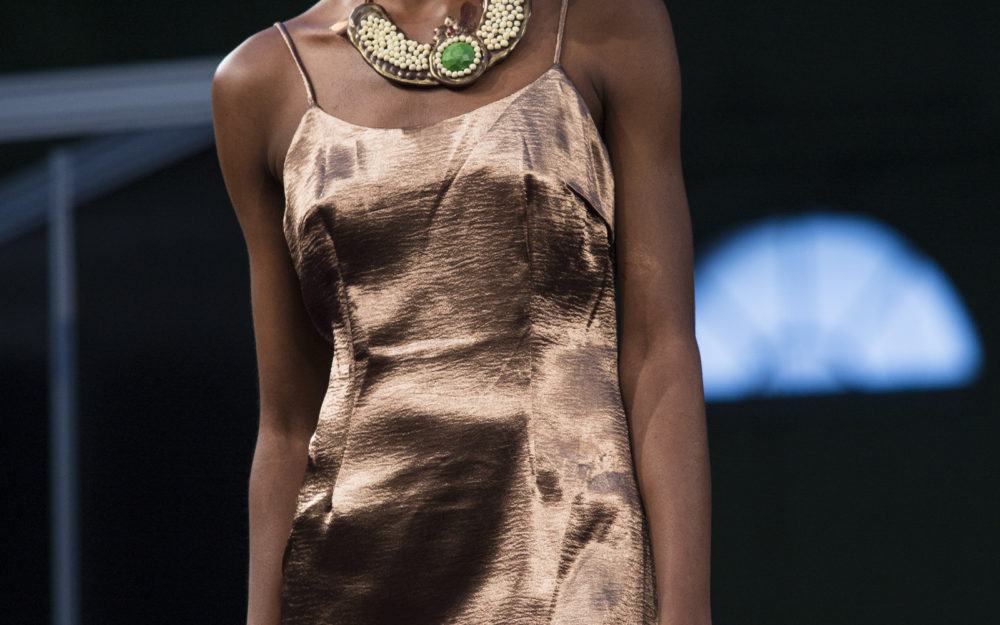 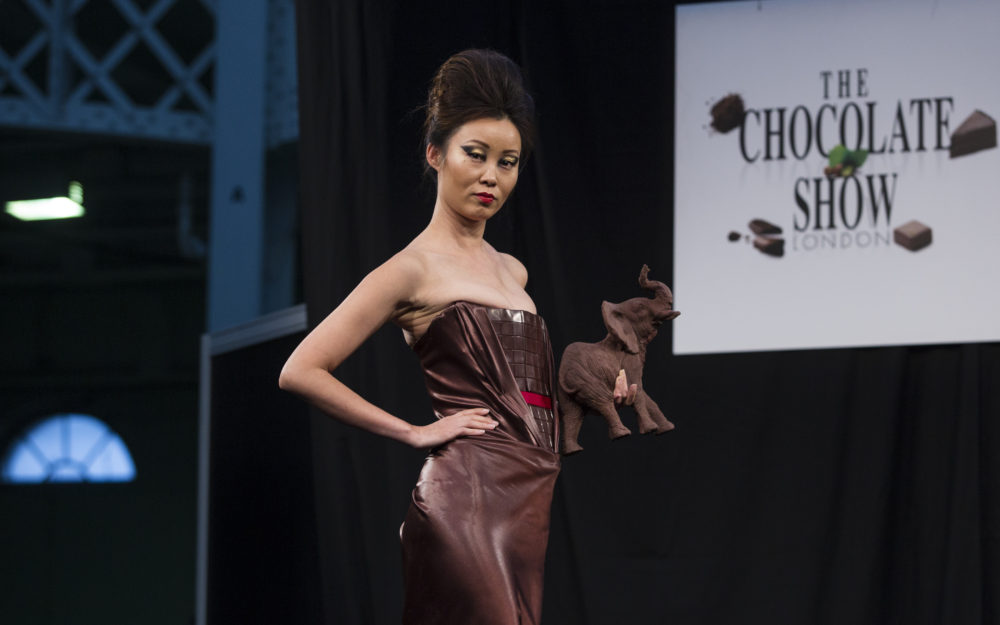 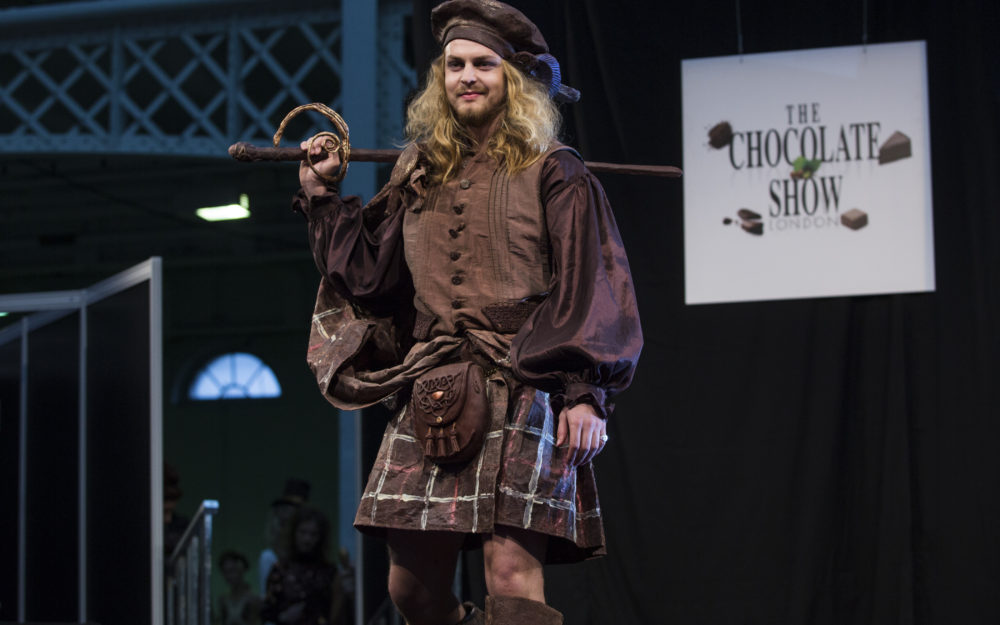 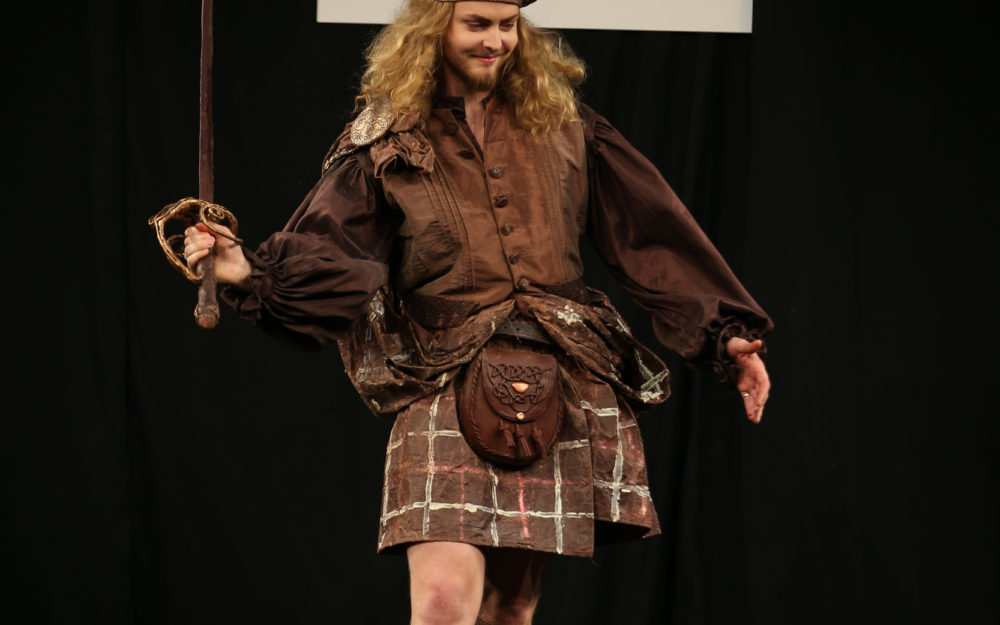 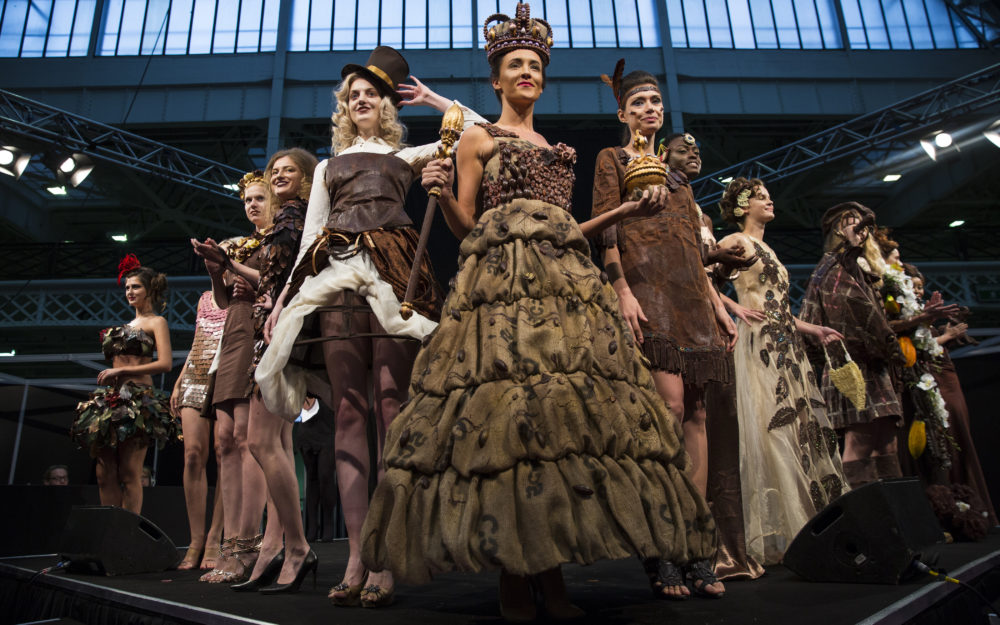 Showing off on the London Chocolate Show

The best from the participating chocolates were awarded medals – gold, silver and bronze and a proud sticker to display on their packaging. The chocolate dessert of the year was also announced. Under the glass roofed expo room inside the London Olympia, I encountered some familiar faces and indulged in my old favourites such as the India-inspired confectionery by The Chocolatier, the brand name of its founder and chocolate maker Aneesh Popat. His lovely mother fed me aplenty with Aneesh’s fragrant water ganaches, hard to find around, unless you dine at one of the Michelin stared restaurants that serve them. From all these, the dark Rose & raspberry, Kulfi in white chocolate enrobed with pistachio, cardamom, saffron and a hint of fennel as well as the caramelised Japanese citrus Yuzu appealed the most to my taste buds, but he has much more to choose from.
At his stand were also presented the Hong Kong based superfood raw chocolates RAIZ THE BAR. Kosher, organic, paleo, vegan certified bars with spirulina, activated buckwheat, chia or rose with acai, all sweetened with coconut blossom nectar – were playing on the millennial chocolate note as a health food. Energise me, Passionate me, will, at least psychologically leave you feel rejuvenated.
From the first time public appearances I was struck by four. The highly bean-specific bars by LAND, the project by Phil Landers. The ex-Paul Young and Mast Brothers alumnus works bean to bar from the Central and South American cocoa, made into chocolate in Bethnal Green, East London. His Malt Dark chocolate bar from Honduras was outstanding, showing natural fragrances of coffee and with malt barley notes.
The Polish-born Marcin Rendak has been making chocolates in his native country for years, but recently he has decided to go more upmarket with his luxurious organic range OCTO Chocolate. Launching for the first time at the Chocolate Show, the beautifully designed rose gold veined leafs print on pure white or black paper boxes, enchanted many visitors. The Almonds coated in raw chocolate with coconut water do not contain coco water, but are sweetened by the healthier coconut blossom nectar. What’s important though is that they taste more like a milk chocolate, while being dairy-free as all of the OCTO vegan-certified edible luxuries.
Yu Chocolatier is a truffle-focused exotic import, not yet represented in Europe, by chef Yu Hsuan Cheng based in Tapei. Inspired by his work at the three Michelin Ledoyen as well as the legendary chocolate maker Jacques Genin, both in Paris, his philosophy is “merging French and Taiwanese gastronomies”. His chocolate creations include Formosa Red Oolong Tea, aged plums, longan, bamboo ginger or black sesame oil into the cocoa mass, tantalizing!
Risa, made by a very friendly Philippine family, introduced the tremendous dark chocolate dusted roasted tender pili nuts. The “Pilitas” were sweetened by coconut sugar, and you could taste both the nuts and the cocoa. The morsels had a texture so creamy and soft that you could let them melt in you moth and chew the fairy delicate pili nuts. So far, they only have there dark chocolate bars both from their home country’s cocoa beans. Sourced from single origin regions Bicolandia n the central volcanic Philippines (sweetened by cane sugar), was the 70% force, while the South Cotabato 60% was sourced from the Southern Philippines (by coconut sweetened).
The award-winning and beyond London famous Rococo Chocolates hosted children play area, while the also well-established Akesson’s single plantation chocolates remained focused on showing the simple purity of terroir and chocolate. Blanxart from Barcelona brought the premium organic bars as well as the more polished and by cocoa-matching ingredients enhanced confectioneries. 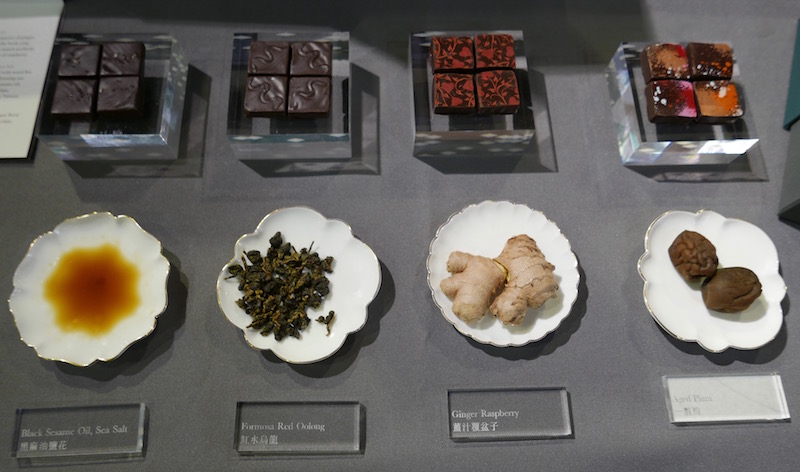 At the London Chocolate Show you can sample an immense diversity of chocolate and chocolate products, such as hot chocolate, cakes, crêpes, fried churros dipped in melted chocolate, fragrant brownies, crafted truffles, single origin bars, lick the bounty straight from the chocolate fountain, but also purchase chocolate making kits. Unique artistic creations by Jen Lindsey Clark such as the chocolate sculptures of Benedict Cumberbatch or a bust of the Queen Mother, complemented the densely programmed event spanning three days. Next to it, plenty of other curiosities appeared on the fair – from cocoa cosmetics to chocolate wine, yes! The Rubis Chocolate wine tastes more like a sweet ruby port than a bottle of Cabernet, but as a dessert beverage it is interesting.
The hottest trends that I spotted from the conversions of ideas at the fair were using more organic raw materials, focus on the single origin or directly sourced cocoa (bean-to-bar), and the increased use of coconut sugar in place of the more traditional sugarcane. The healthy image of dark chocolate seems to continue enchanting consumers. The usual sugar, be it raw or even better organic cane sugar, or dehydrated cane juice, all the same, is unsuitable for those trying to keep their GI load low (GI 60 of cane sugar). The now increasingly popular dehydrated coconut sap or juice (GI of coconut sugar 35 ) are both minimally processed, high in minerals and do not undercut the flavour of cocoa as stevia does, but still should be avoided by diabetics and the most purist chocolatiers stick to old good sugarcane because of its more neutral sweetening power, not hindering the natural cocoa flavours. 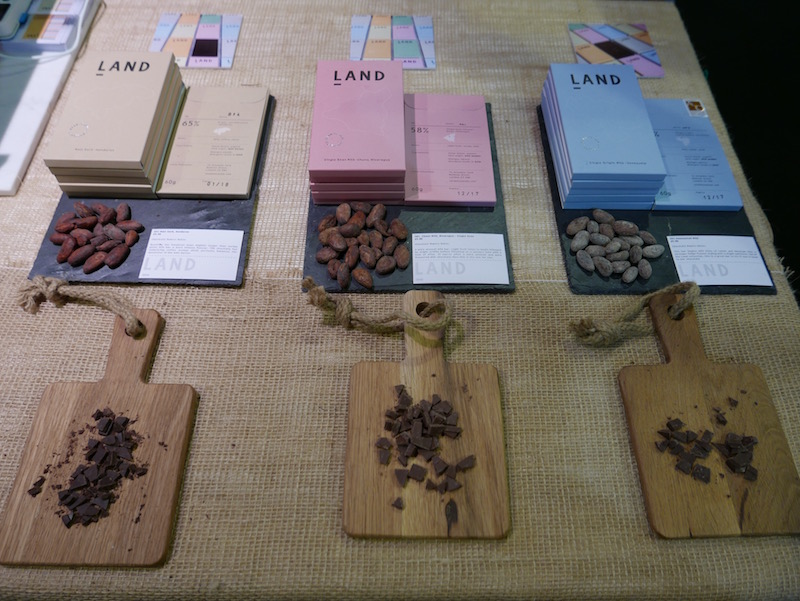 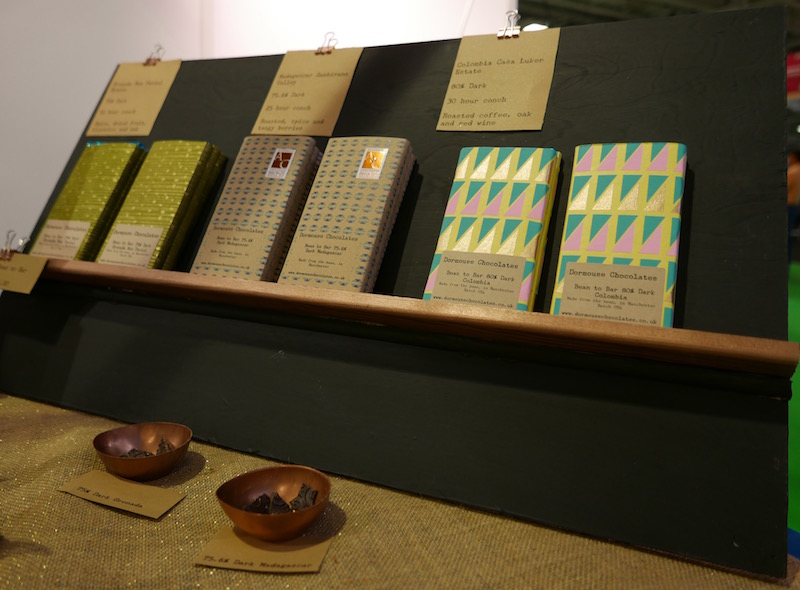 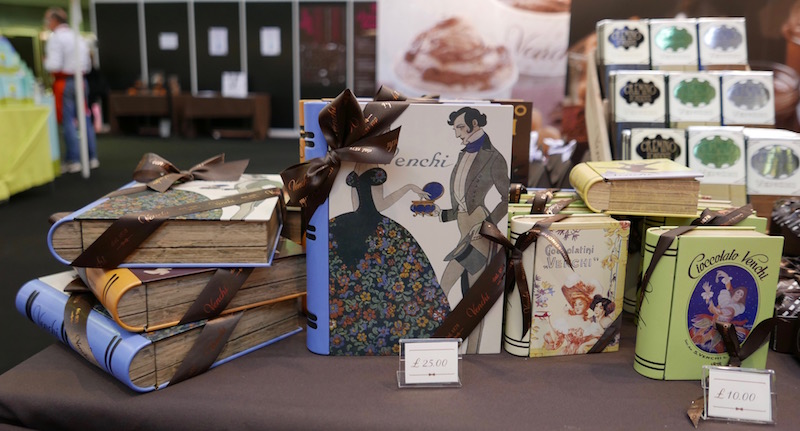 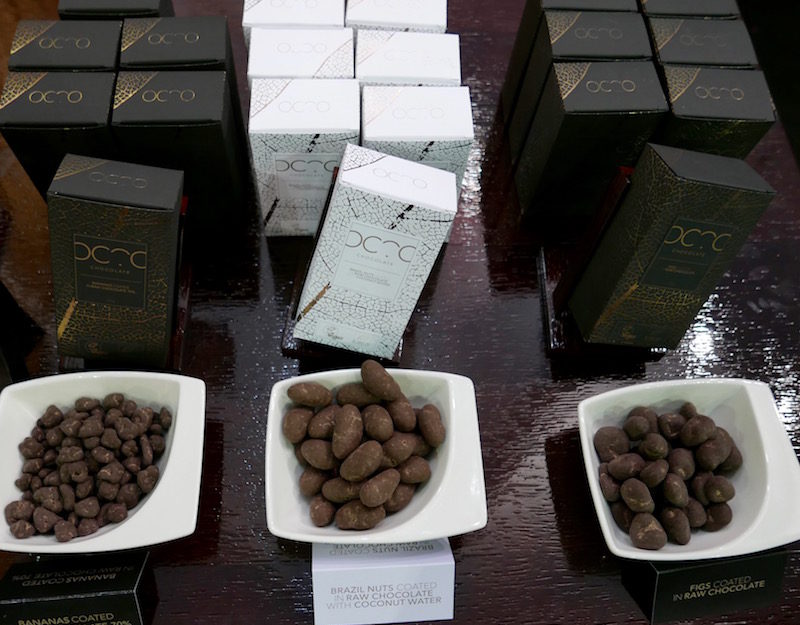 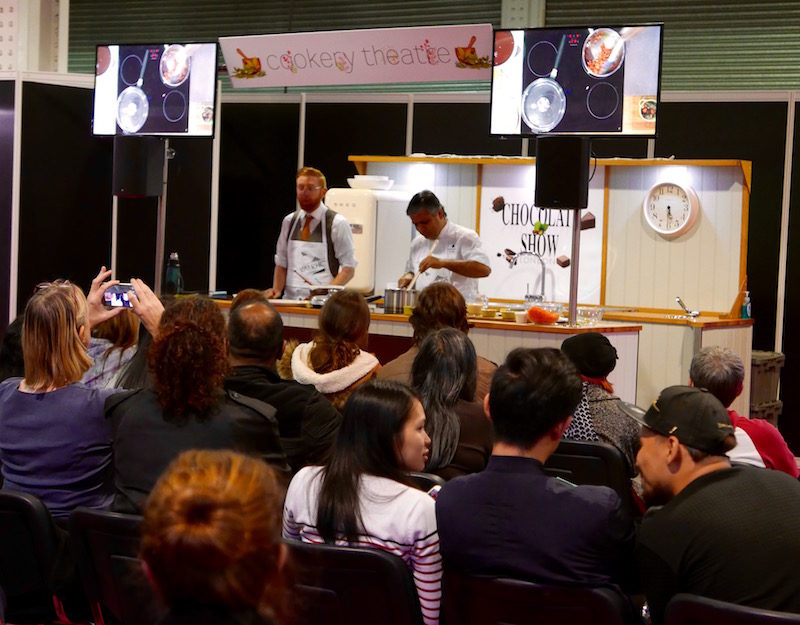 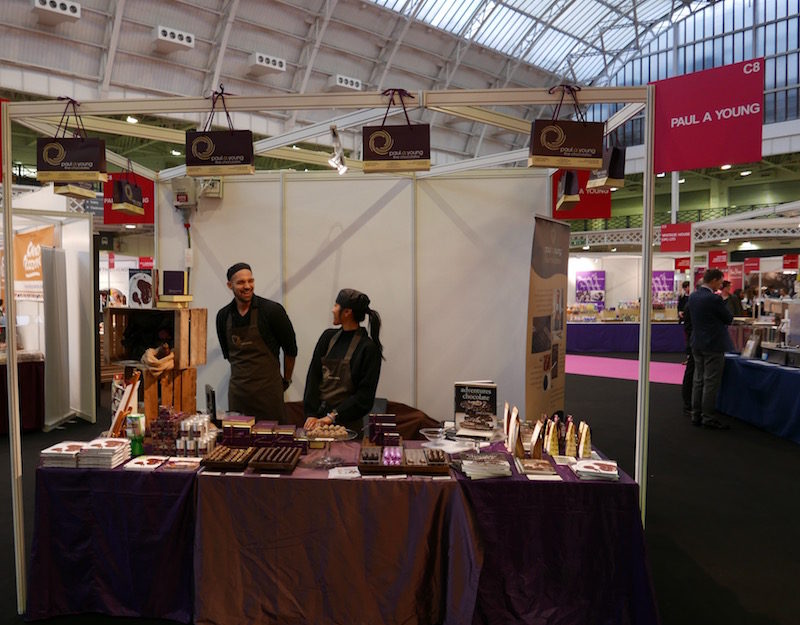 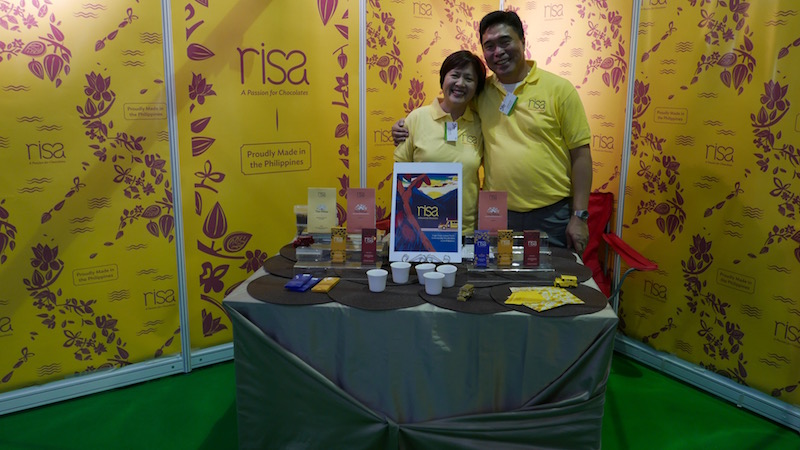 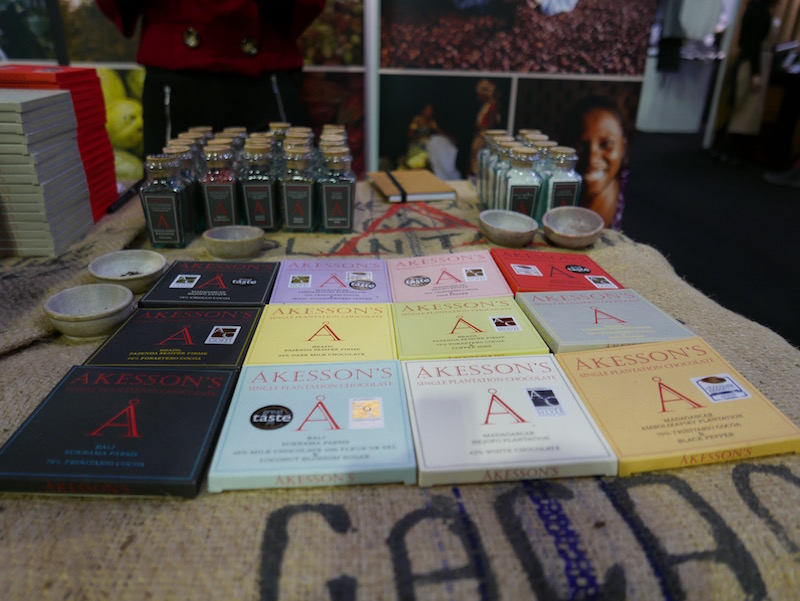 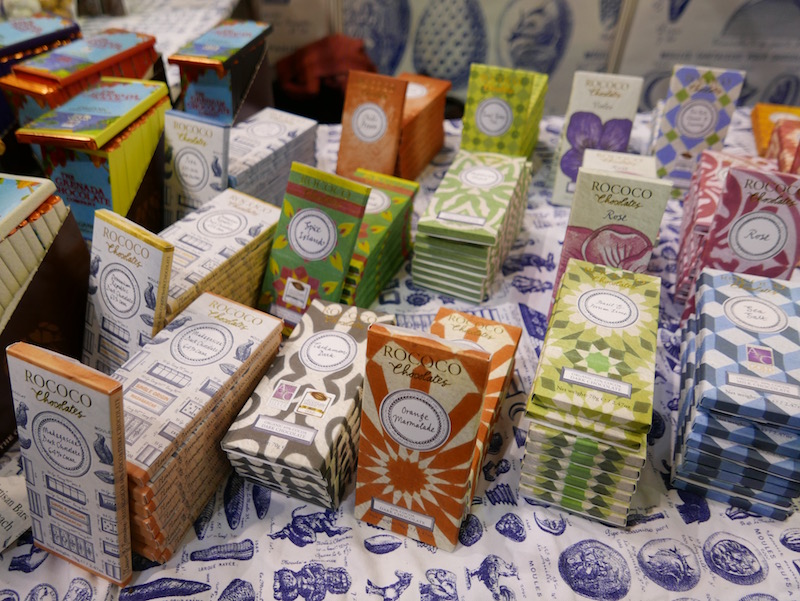 0
Each October, come to indulge your chocolate cravings at The Chocolate Show in London, since it is also the most entertaining as well as informative cocoa-focused event in the UK. There are some other, to chocolate dedicated, fairs in town worth checking out. The chilly outdoors setting of the Chocolate Festival fronting the Southbank centre, is ideal for your pre-Christmas chocolate shopping.
This year, it will take over the weekend between 10 and 12 December.
11am – 8pm on Friday, 11am – 6pm Saturday & Sunday.
The Chocolate show is getting global. With separate events curated in Belgium, France, Italy, Monaco, Beirut, Japan, Moscow and Seoul so far, the chocolate palate has never had more opportunities to discover the magic versatility of the cocoa bean and benefit from the creativity of the world’s chocolatiers. Do not hesitate and take your part.