The Perennial restaurant in San Francisco has been opened for a couple of months now and it has already stirred the US media as the America’s model for sustainable dining. A daring project, that could become an inspiration for the already established and to be restaurateurs globally. Climate change is a real threat, and ecology is about improving our lives, so we must include the food system into our lifestyle considerations. Start with seeking restaurants, where sustainability is as important as creating a comfortable atmosphere (I wrote about Chefs and restaurants leading the sustainable change globally in my recent musing). 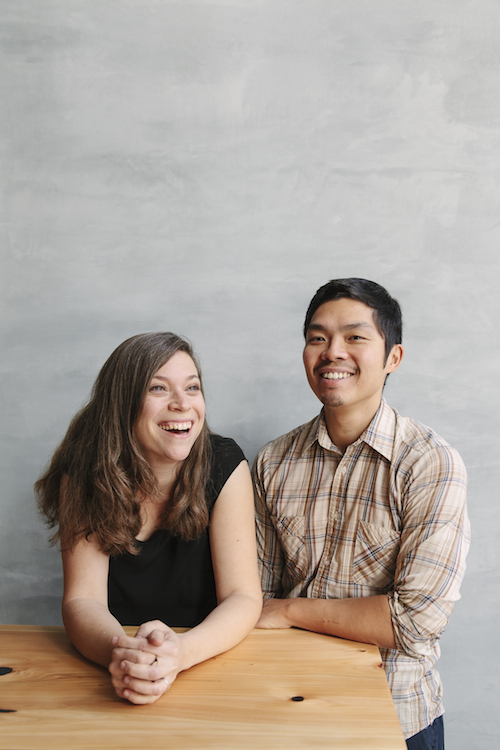 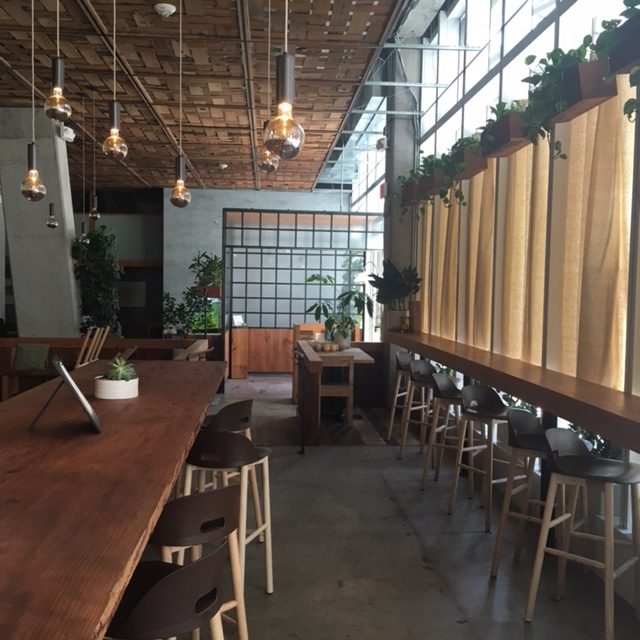 Sustainability rings from the menu, radiates from the design, while on the Perennial’s website each practice is zoomed in detail. The title of the restaurant itself preconditions your mind for behind the scenes of your meal. Perennial was named after crops yielding during many consecutive harvests, while their increasingly deep roots suck in nutrients and water thus preventing soil erosion. Food Tank, environmentally minded global food group further explains that “this reduces the need for soil tillage, a practice that can lead to soil erosion and chemical run-off, makes them more drought-resistant, plus they pull more carbon out of the atmosphere and hold onto it longer in their biomass, helping to mitigate the aforementioned meteorological unpleasantness.” Forget corn, rice, potatoes and soy beans, the sprawling monocultures that are literally suffocating us! Kernza is a perennial and the bread made from this grain has become one of the successful projects of the Perennial team. Since kernza’s roots capture carbon from the environment, the plant is not merely carbon neutral, but it deletes carbon footprint from the air. With the help of an in-house pastry chef the flour was turned into a delectable sourdough bread with a moist center and a typical hard crust. Served upon request with butter made from cows milk that involved another sustainable project – a carbon cattle farming, the kernza bread became an inseparable identity of many of the chef’s creations. From toasts to cracking particles in salads and bowls, the sourdough is being used wisely, no waste.
Although the plates are small by the American standards, any leftovers and kitchen scraps are recycled in the aquaponic facility just outside San Francisco. The worms, that will become fish food, compost the food waste. As the fish swim in the water reservoir, they fertilize the greens growing on the surface. These vegetables consume much less water than when grown in the dry California soil and are sent back to the restaurant. Next to cute cartoon cards available at the restaurant, an illustrative aquaponic fish tank was installed by the entrance so anyone can understand how it works. Just look at my image bellow. 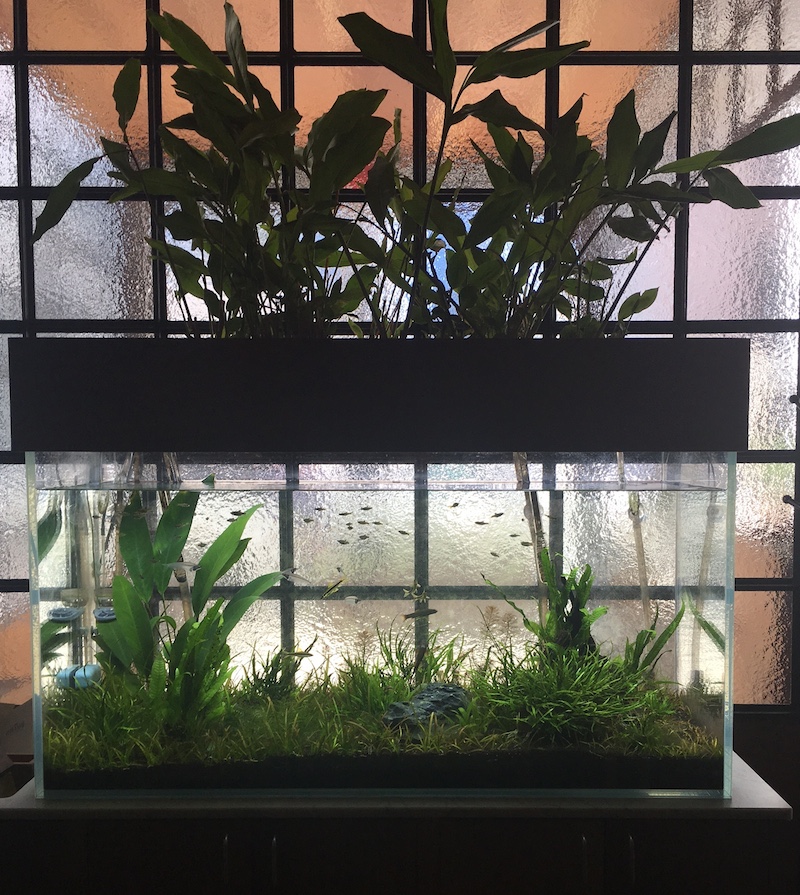 Designed and also partly supplied by a Zen Buddhist author and architect Paul Discoe, the metal-meets-wood interior is pleasant to the eye, yet can lack comfort in its austere nature. As our bottoms noted, the chairs at the restaurant are quite hard to sit on for hours, but the bar stools seem more accommodating. Discomfort goes on, since sharing space and toilets with an independent yet adjoining cafe makes the “waste not” attitude less practical, but it serves its purpose. The “industrial-chic“ look made from furniture with reclaimed wood reminds me of the contemporary Japanese interiors in Tokyo’s coolest neighborhoods. The designer cum zen Buddhist also co-founded and grows plants for the almost four decades old vegetarian restaurant Greens in San Francisco. Discoe’s garden and aquaponic greenhouse in Oakland grows some of the Perennial’s produce. Overseen by Nathan Kaufman, the restaurant’s Director of Living Systems and the aquaponics expert at the Urban Adamah in Berkeley, the kitchen scraps are being “recycled” while new food is being created. If used wisely, nature can provide bounty in magic transformations.
It is not easy to open a new restaurant in San Francisco these days. Rents go up, the competition is rife, since most global cuisines are already represented, and finding an experienced kitchen staff is challenging, confessed Karen Leibowitz, the female brain powering the project. Enter her partner Anthony Myint, who together with Leibowitz co-masterminded the once successful San Francisco eatery, Mission Chinese Food, and their newborn is highly expected. With respect to their real child, born a couple years before this new culinary venture, Perennial was inspired by caring about others. When the couple was approached by the management of a new building across from the Twitter’s headquarters to open a restaurant, their condition was to move it to the future, their child’s as well as our Planet’s. As parents, they wanted to make dining sustainable. 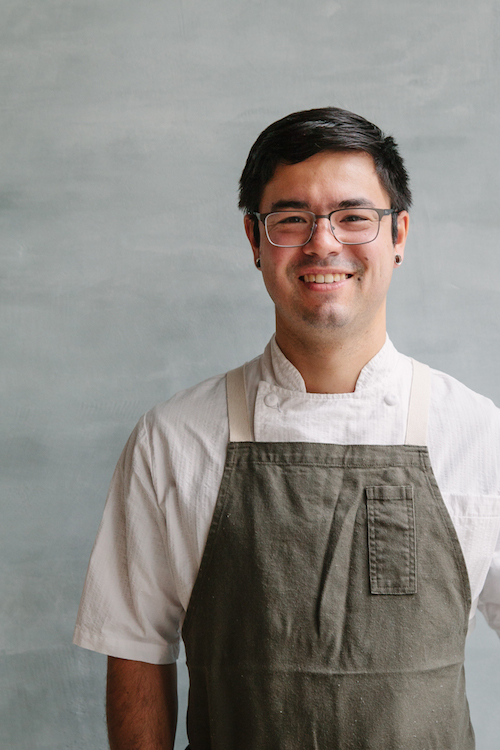 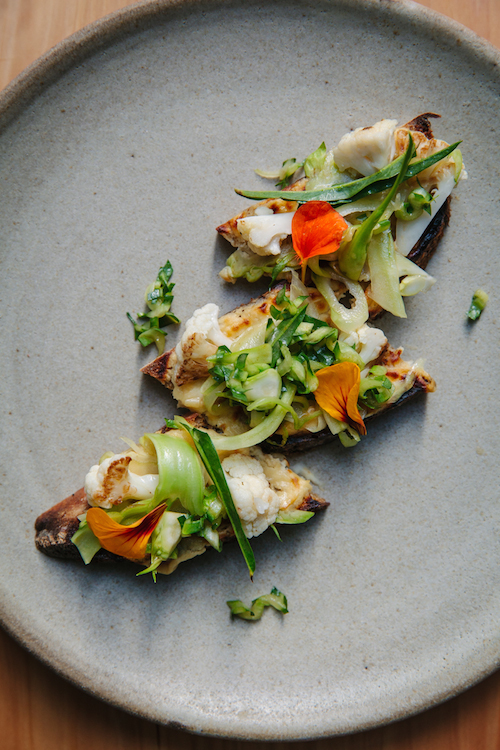 Sustainability on the contemporary plate

The chef Chris Kiyuna, after a long stint at Mission Chinese Food, was sent to sharpen his culinary daredevil at Noma in Copenhagen. The result is food that is clearly off-the-beaten path, unique and for those looking for simple plates perhaps too complicated. But this is California and combing locally farmed and raised ingredients in internationally and multiculturally inspired combinations is the norm done tremendously well.

For dinner, the four-courses pre fixe menu at $59 per person is sadly quite inflexible as you can only substitute the dessert for a savory dish from the first group. You may need to pay extra for some plates such as the Eggplant that we ordered in place of the sweet course. From the start, some customers have been ranting against the high prices at the Perennial, yet, the magnifying reality of San Francisco with rents climbing annually to the new heights, the ladder has to be set high to meet their costs. Sustainability is not cheap, when despite saving through the lower energy bills, the new technology and locally sourced ingredients from low carbon farming inflate the budget.

I had to start with the Hydroponic lettuces. A large plate of wonderful quality greens arrived dolloped by creme fraiche and toasted sunflower seeds. The lettuces do not taste fishy or aquarium-like, do not worry. Next came Tomatoes with a nut-free creamy pesto on kernza toast. A juicy and basil fresh topping decorated with warm-hued flower petals accompanied the toasted and deeply satisfying kernza bread perfectly. Pecking on my husband’s Avocado puree with grilled avocado moons, geranium fragrance, crispy pork bacon strips & pepper crisps, that was rich but balanced, but not as impressive as the other plates. Much better was the substitute of the Eggplant puree with broiled eggplant & caper beans in green tomato oil sauce. Complex and rich serving that replaced the dessert without a remorse. Next came Summer Squash with marinated sunflower seeds, nice. Yet, my favorite was the tender, perfectly cooked Trout. We ordered the bread and butter of course, and we could not have had enough of such a wholesome womb of perennial sustenance. Overall, the often changing menu stood up to our Califonia standards. 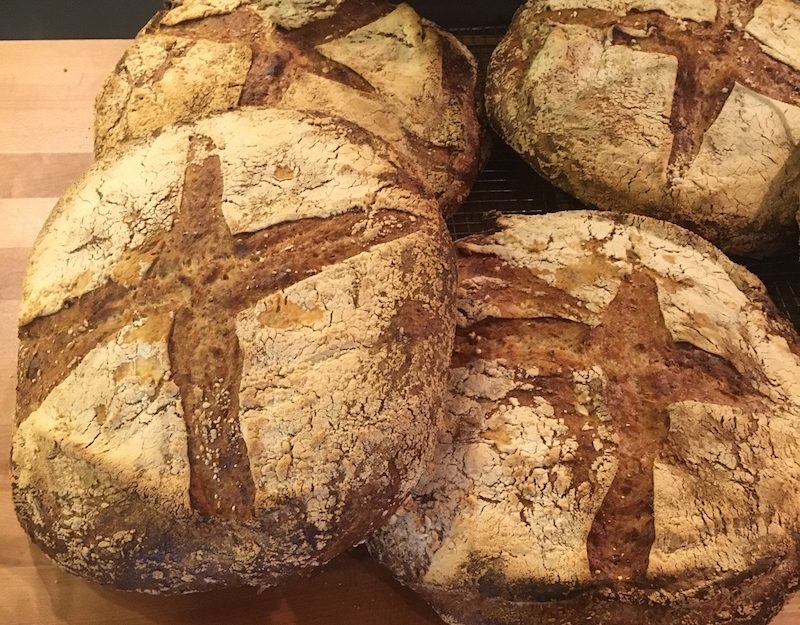 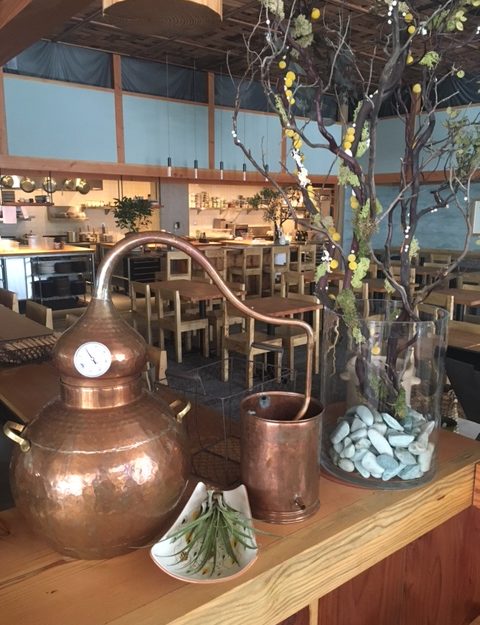 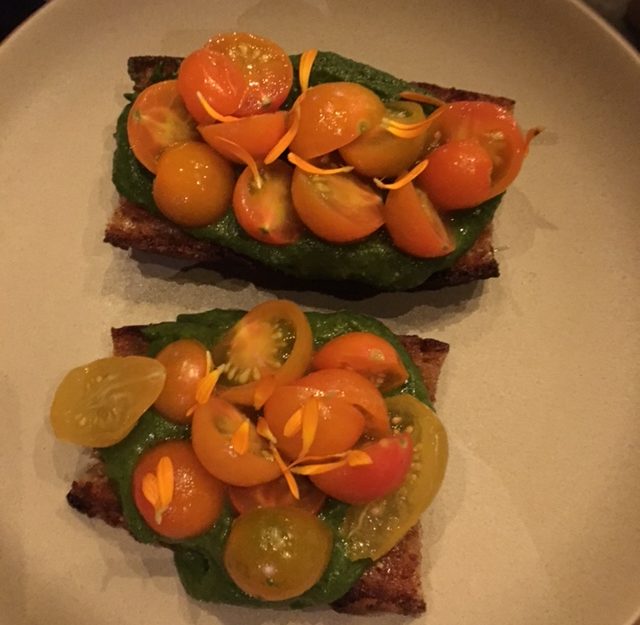 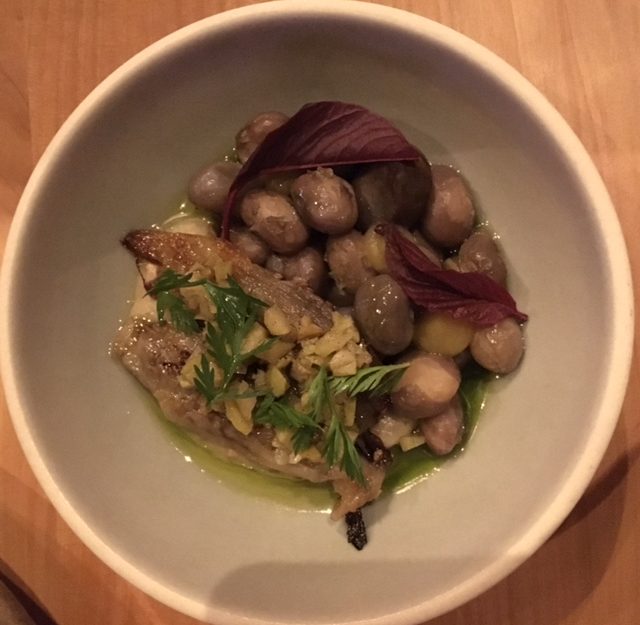 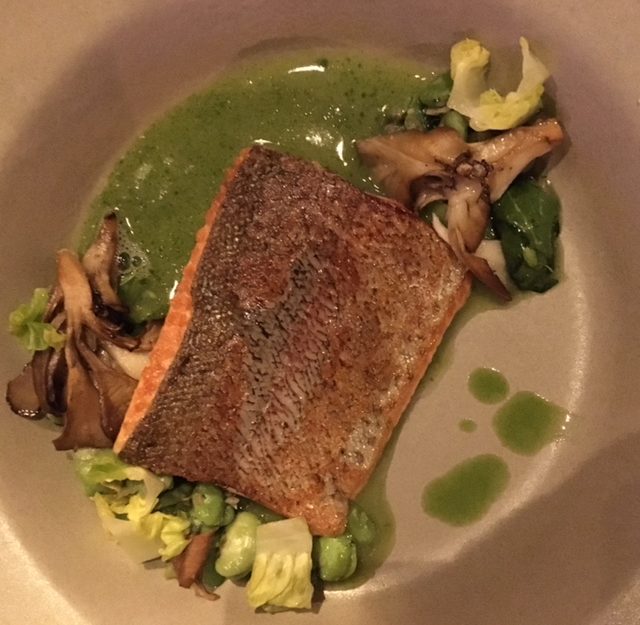 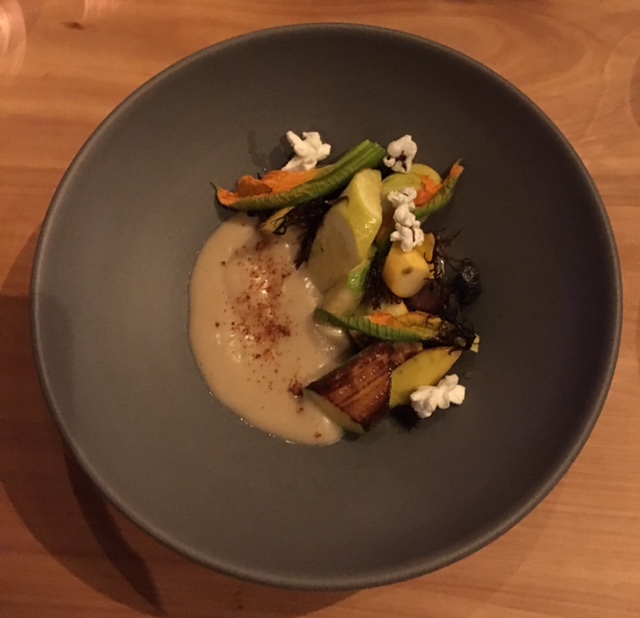 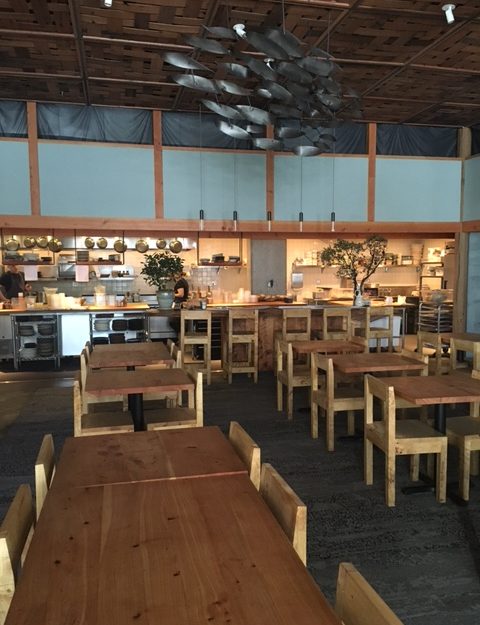 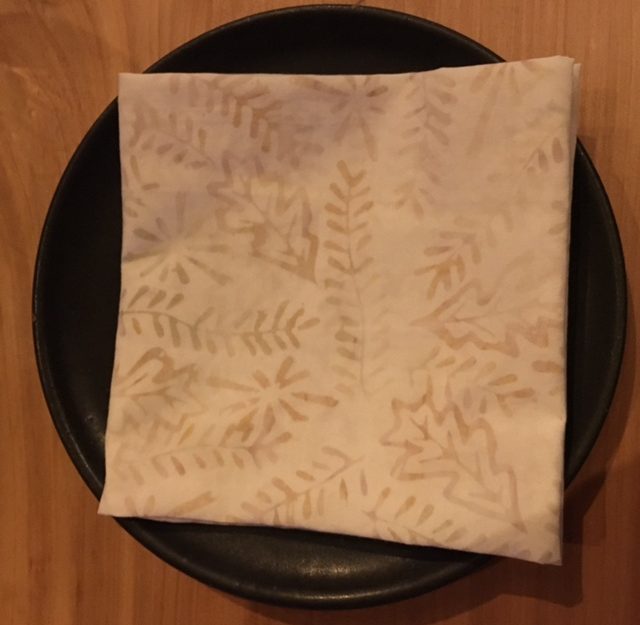 Beverages are integral to indulgence as is our biological need for clean water. The most sustainable solution to the later is filtering the local tap water and serving it in reusable glass bottles or pouring at the guest request from pitchers. Increasingly, restaurants have been eschewing bottled imported water, while pushing for the hydration on tap. At Perennial, the beverage program goes beyond serving tap water since the bar, munching a shark’s bite into the restaurant’s interior, became equally important. The happy hours from 3-6pm replaced the lunch service, and the cocktail bar is slowly becoming an after-work scene. To the disappointment of the Perennial’s founders, the tech employees at the surrounding offices have free lunches so they tend to eat in, so drinks and dinner next door make more sense. There is so much on tap to sip on, but the wines puzzle the most many of the eco-conscious diners. The beverage director had decided, based on her direct experience with the wineries around the world, that many wines shipped by boat from Europe are more sustainably grown and made than the overwhelming majority of the local, drought-stricken California offerings. Still, California features on the sustainable wine list. The by the glass selection is not cheap as most exceed $10. A Sauvignon Blanc by Lieu Dit from Santa Barbara was too ripe growing in the warm climate, but a Riesling from Guimaro was crisp, while Wei Chi dry Semillon was more woody with a pleasant aromatic sweetness. Moving to reds with a bright Spanish Mencia and later a Pinot Noir by Johan in the Oregon’s Wilamette Valley, that was more on the new world fruity side, we were far from impressed by the selections. I must note, that being a highly demanding wine connoisseur makes by-the-glass offerings usually at least slightly disappointing. Next time BYO or order a nice bottle.

With a deserved applause to Perennial, dining out sustainably is now easier for the residents and visitors of San Francisco. Similar projects await their permanent opening in London (Tiny Leaf), while others like Poco, the best sustainable restaurant in the UK for 2016, are already humbly serving superb local food driven by sustainability. Generally, in my opinion, if the food business wants to maintain its integrity through its pleasure-providing mission while delivering nutritionally dense plates, in the new millennium it must consider its carbon footprint, food waste and educate its customers on a responsible joy from the food they serve. The team behind Perennial deserves to be respected for progressing the future of dining highlighting cause in a country which is the second biggest polluter in the World. I will definitely go back, when in town.

Read more about the Perennial’s sustainable practices in the post by Andrew Dalton for San Francisco Eater.

Photos by: Radka Beach & Alanna Hale (where not watermarked).