Tartine Manufactory was long overdue in San Francisco. California’s most famous bread baker Chad Robertson should have expanded his rustic temple of slow bread years ago. After 15 years in business, the enviably equipped Tartine Manufactory was born. The space is like a foodcourt run by geeky bakers. A counter café, soft serve and gelato parlour, bakery, seductive bar, and a coffee kiosk – everything glutonous well-done under one roof. Attracting their devote tribe of bread connoisseurs, but also finer palates enjoying honest food in pretty places. Tens of thousands of foodies endured the long, slow moving lines, standing in rain, scorching summer sun, gusts of wind, or freezing cold outside of the Tartine’s original tiny bakery in the hip Mission district. Most wondering if they could expand to cut the wait a bit. So, once the virtual news was out this year, I summoned my husband, trolled in and ordered half of the menu. Ending with clear plates, empty glasses and a loaf in my bag, the overindulgent orgy stamped “go back”, so Tartine Manufactory is now our favourite casual lunch spot in San Francisco. 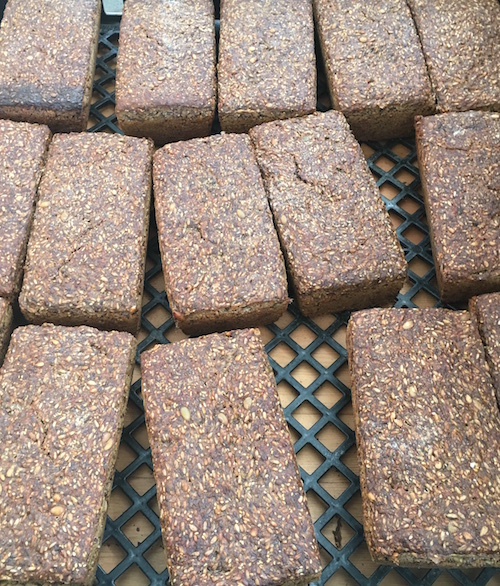 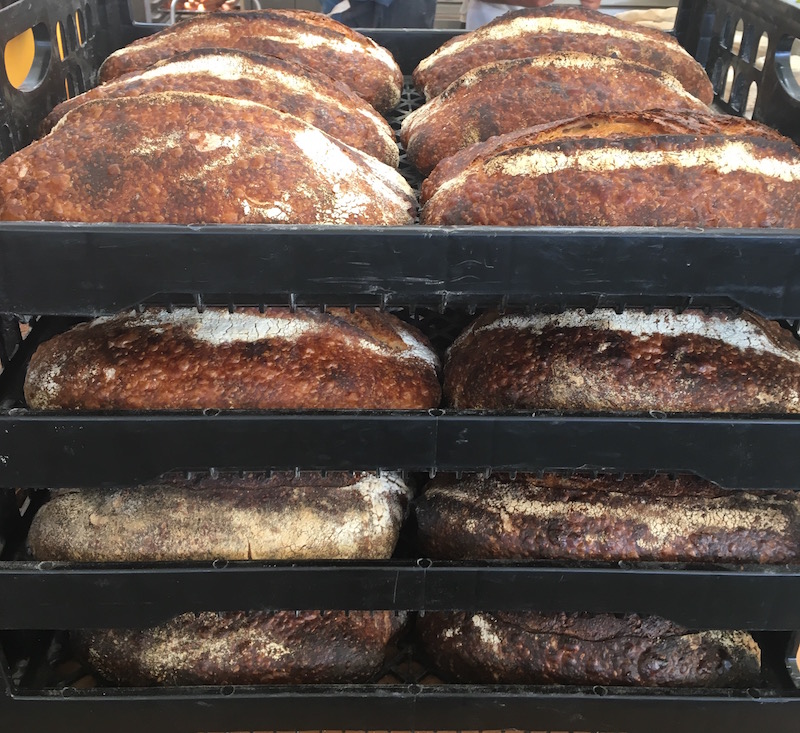 Tartine: inverting the role of bread when eating out

Despite the popularity of the locally conceived Acme bread, Chad and Elisabeth of Tartine were more daring. The oven adorning duet opened up the California palates to new flavours in bread and pastry (the later a touch of Elizabeth’s female hand) and a respect for patience. The persevering lines of waiting customers honour the time spent by making any of the loaves baked inside.
Compared to most cafes and restaurants, the bread is the star here, not a side game. After all this is the expansion of the famous Tartine Bakery that could manage to bake bread only once per day, but now in its grandiose high-tech manufactory it is possible to make fresh loaves three times in the 24 hours span, guaranteeing a warm slice for most. 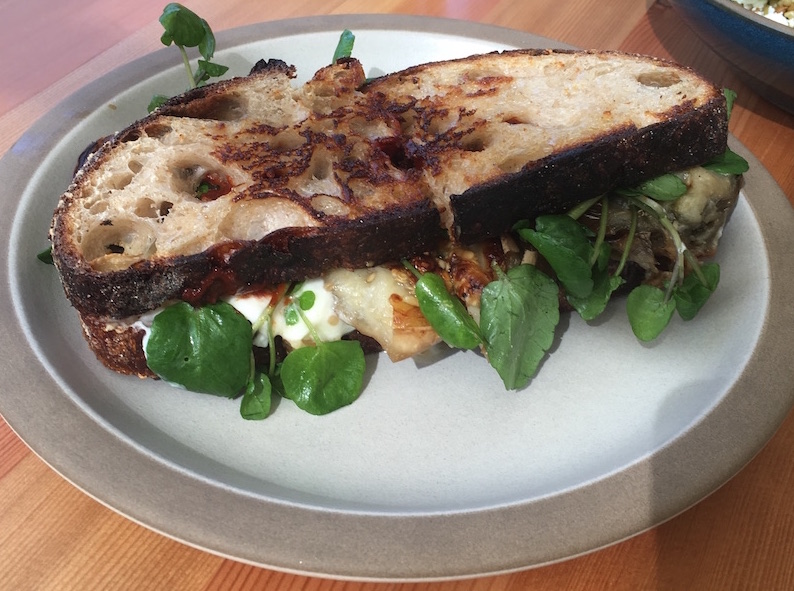 The San Franciscans have been keen on showing their handwork recently. Perhaps it is the anti-tech syndrome, but it seems to me more the locals’ desire to enjoy the process of making something splendid, like bread. The contemporary fresh design of the Manufactory is the logic left brain sharing the artsy right hemispehere with another warehouse space of the locally made and world famous Heath Ceramics. The high factory style windows let in plenty of sunshine on the fog’s days off and the nakedness of the design itself reveals transparency in what will be served to you. The sacks of milled flour bear their labels, the hands of bakers shape the loafs while the kitchen around the cashier corner assembles every plate together to your visual gustatory delight. The basics of the bread are still done behind the walls, yet the glass windows from the ceiling to the mid-height keep the connection with the raising bread tangible. 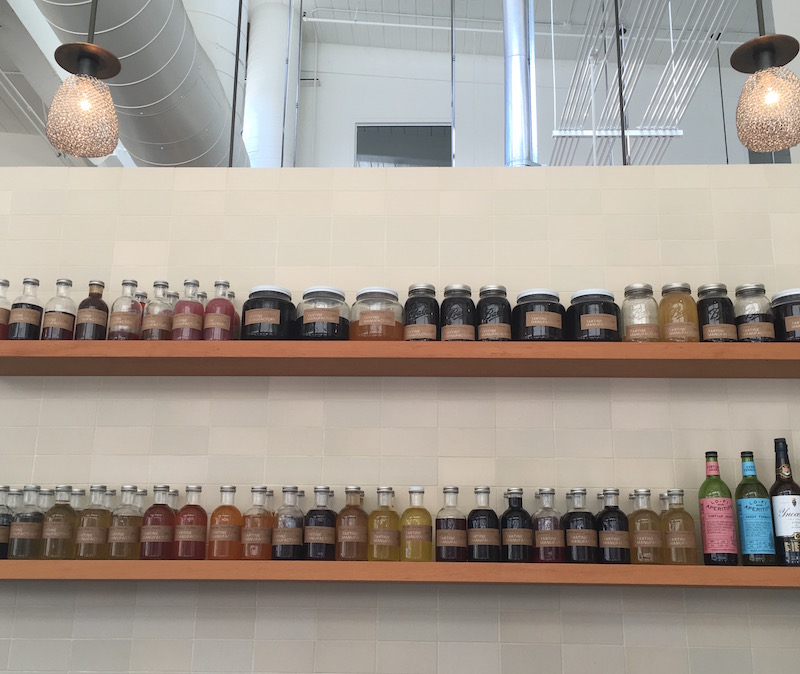 In a very San Francisco casual style, no reservations are taken for breakfast and lunch. Either is ordered (crossed like in a Chinese dim sum eatery on a handed out paper menu) and paid at the counter, then you get your order number scribbled on the menu and keep it visible on the table so your items keep streaming in. Still, the Tartine Manufactory offers more comfort than its midget old bakery cum kitchen. With the dinner tables available to book and waiters on call, the secure comfort of reservation draws new customers in. The curious new diner, dressed bohemian chic or cal-artsy, ventures into its brighter, comfortable and casually on the move space.
Before the day wears off though another line at the coffee counter inside, and during the warm months at the ice cream window pandering to the little ones forms regularly. Later in the afternoon the vibrant bakery turns into a wine bar. Nesting on wooden stools, sipping on the signature house ferments, cocktails made from Tartine’s mixologist original shrubs, a glass of wine or a bottle from the long beer menu, make a great company if you wait for your date here.
Although much of the food was prepared through the long process of fermentation, raising and setting, the pace of the service is fast food efficient. The difference between a Tartine Manufactory server and a Burger King employee though is that the later probably does not know much about the food and its provenance. 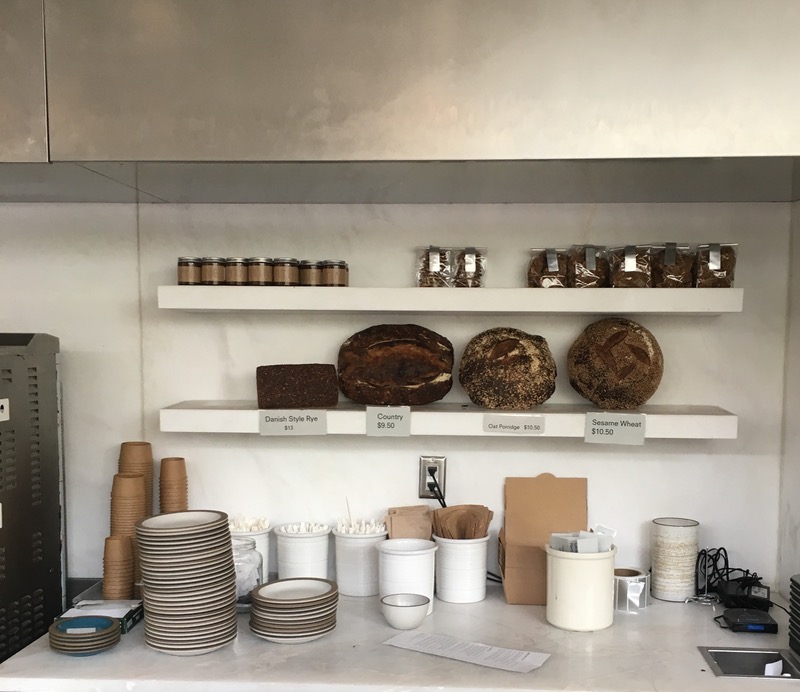 Making of an extraordinary sandwich

Tartine takes inspiration from the global food cultures, mostly European, but sources the ingredients locally and makes almost everything in-house. Eastern European pickles adorn many sandwiches, while the Trout Smørrebrød borrowed from Scandinavia (the dark rye bread versions from Denmark precisely). These tiny open bread tapas with toppings like cold cuts, seafood and pickles can be devoured day and night. Central Europe has also its version of the convenient smørrebrød. In Switzerland Sprüngli makes my favourites, while the Czech chlebíčky are made by my grandmother on festive days, but at most delis and pastry shops you will find plenty of these mayonnaise ladden and calories restoring savory white bread treats. Bite into it with a glass of wine as the Austrians do at Zum Zchwarzen Kameel in Vienna or as a starter at the Tartine Manufactory when waiting for the main plates. We had the exquisitely smoked trout bathing in mayonnaise spread on Danish Rye bread. To sooth our lunch hunger pangs, the vegetarian Eggplant sandwich was called in. Grilled eggplant on an oozing strachiatella cheese with greens and red calabrian chiles sauce, all squeezed between country big eyed white bread that was toasted to a charred crunch, did sattisfy. The sandwiches are all ultra generous, but do not come cheap. Correclty price quality canot be discounted. 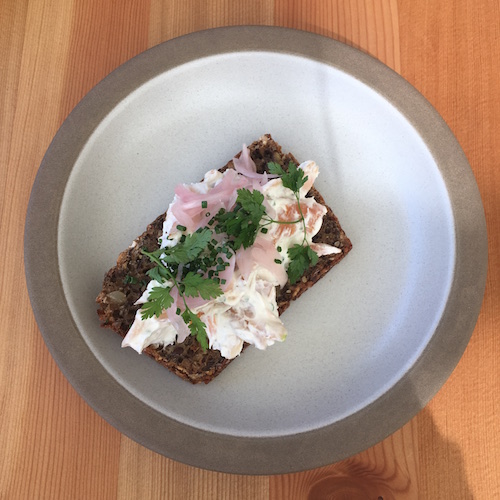 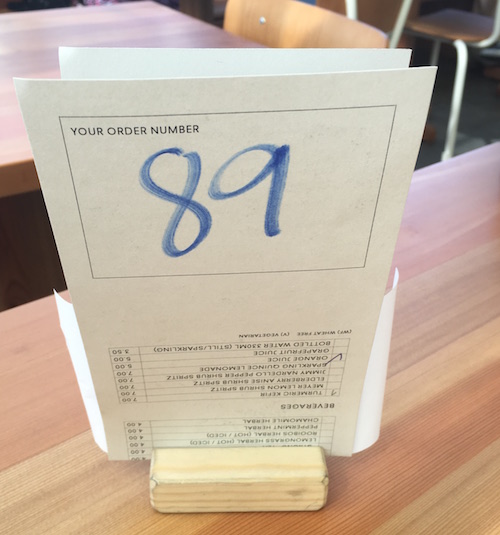 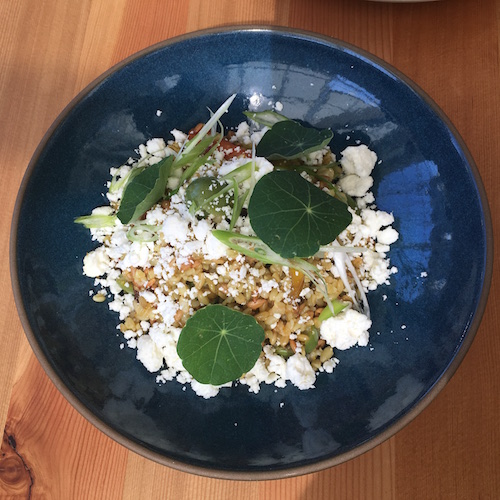 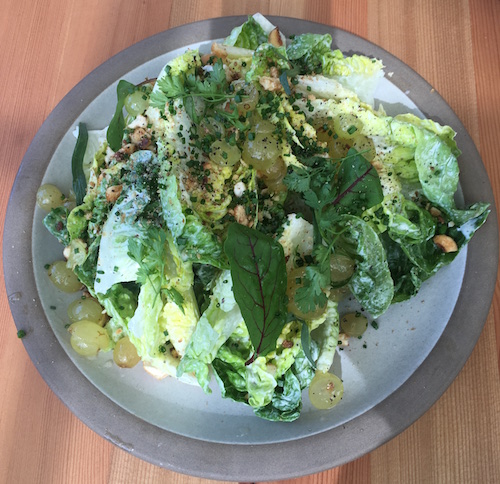 What to pair with bread at Tartine Manufactory

To go with the bread entourage, the California meets Southern cuisine of chef Sam Goinsalvos is served in glazed Heath Ceramics bowls and flame plates designed by Travis McFlynn. Ideal for sharing, so dig in and get messy.
Make sure you get the LITTLE GEMS lettuce with buttermilk dressing, corn crumble, fresh herbs, grapes and bread crumbs. Although this refreshing bowl gets little twists witch changing seasons, so much is going on there – sour, sweet, crunchy and creamy, all in one bite. Superb! It reminds me the food at the now gone Bar Tartine on Valencia street.
The GREEN FARRO, SUNFLOWER SEEDS, ROASTED CARROTS, POMEGRANATE, FETA, VADOUVAN salad was a bit of a dark sheep next to all the food bombs, since it felt too boring. Middle-eastern spices, marinated olives and grilled string carrots, cheese, that all is now trendy from London to New York but not the strongest plate here.
With the food court diversity, more talent was called in to help. The most important role was given to Richard Hart, the Head of Bread, and he took on the gargantuan task bravely.
The Tartine Bread Service is a fun tapas style assortment of small snacks, pickles, ham, cheese and dips to accompany the daily bread selection. Country loaf is the only bread daily available, and the rest rotates: Ancient Grains, Grain Porridge, Danish Style Sprouted Rye, Sprouted Grains, Olive, Sesame, Walnut. 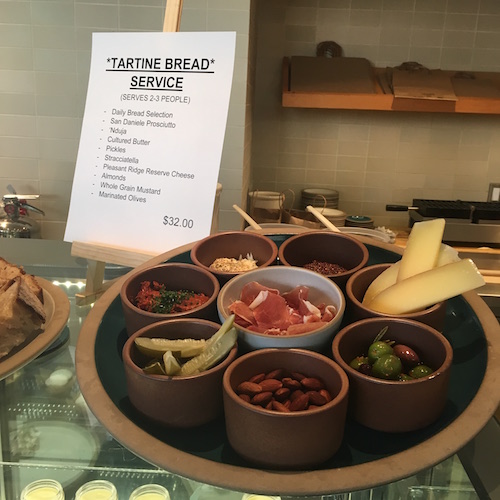 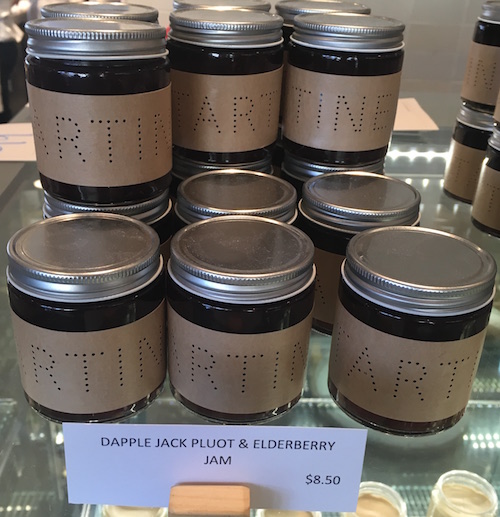 The Coffee Manufactory, Tartine Bakery’s coffee company directly sources and roasts its beans, while the handmade Mavam espresso machine from Seattle, Oregon freshly brews espresso. You can also get your regular filter coffee, cappuccino, latte, the Aussie flat white, Italian macchiato, cortado, or Gibraltar. Directly sourced tea leafs from the London-based Rare Tea Company are also brewed hot. I was sipping on the Turmeric keffir that was outstanding!
To take home, get some of the unusual preserves like the Dapple jack Pluot & Elderberry jam. The cakes, scones and cookies call your naughty fingers in, so get one for office. More, you get a convenient freeze box for the ice cream to go. The gelato base is made with fresh water buffalo milk from the local Double 8 Dairy and swirled on the spot. 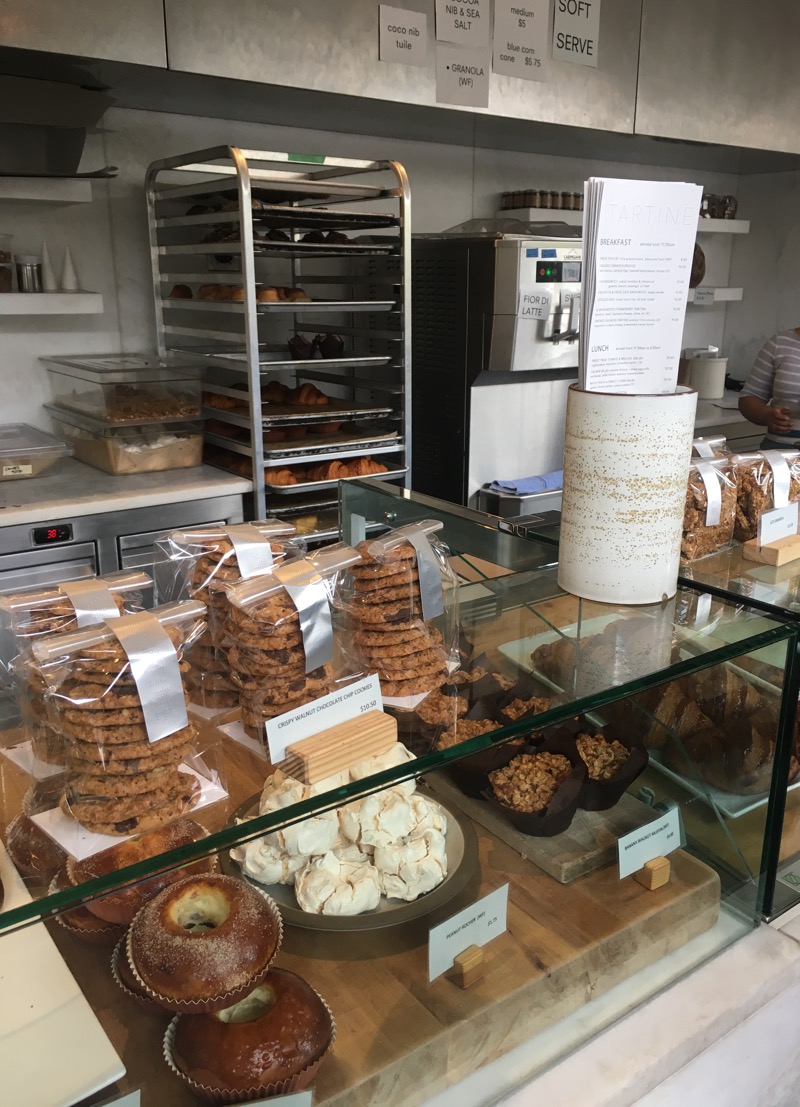 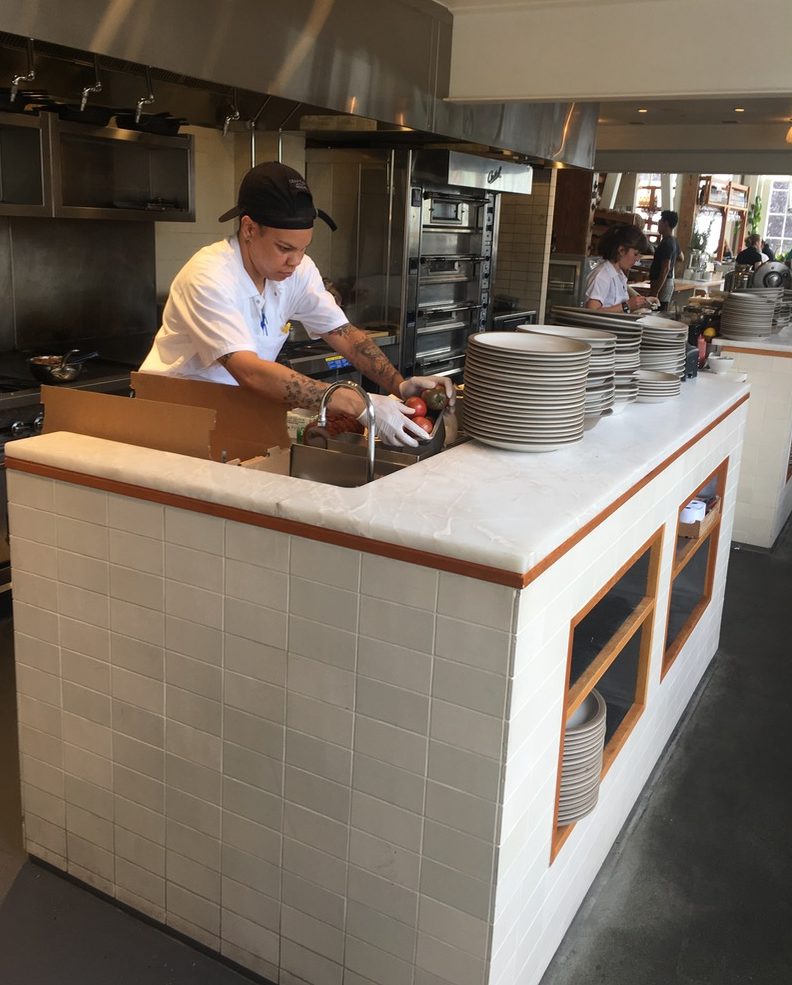 Artisans hive in and around the Mission these days, this is more real than Brooklyn though, at least for now, no scandal tarnished the “Mission made” brand yet. Social tensions between its latino population are vented out on the street walls, while the rest gets employed by many of the blooming businesses. As rents go up almost everywhere in the creatively affluent Bay Area, if one does not want to change the relative safety of North America to the wild South, has to adapt and ride on this creative rocket of quality that is now flooding like a tsunami the streets of the Mission. Be part of the boom, at least by savoring and witnessing it.
Tartine has opened a cafe in Los Angeles, so now the Angelenos can finally taste the real European-style bread with a touch of the wizard Chad.
595 Alabama St, San Francisco, CA 94110
MANUFACTORY: Mon-Tue: 7:30am-5pm & Wed-Sun: 8am-3:30pm
DINNER:
Wed-Sun: 5:30pm-10pm
COOKIES & CREAM: Mon-Thurs: 12noon-5pm & Fri-Sun: 12pm-8pm