Curiously zooming on the classy Torinese and the indulgent Piedmontese feasting at the Michelin stared Ristorante Del Cambio you feel Turin’s regal and politically charged past. There are tourists too, but they melt into the local majority. Since 1757 the frescoed restaurant has sealed its majesty in using only the finest Italian ingredients with the permeating Savoyard heritage.

Turin is the “city where Italy was created”. At Ristorante Del Cambio Garibaldi, Cavour and Mazzini over heaping plates of tagliolini, literally united Northern and Southern Italy in the 18th century (Risorgimento movement). The first Italian parliament faces the restaurant, and the table of honour overlooking Palazzo Carignano where Cavour – one of the fathers of the nation – regularly dined, is highly desired.
Del Cambio is still the place to be seen in Turin. Its velvet clad chairs, crystal chandeliers, the historical importance and the location are strong assets also for the local chic society. Turin-born Carla Bruni was reportedly a big fan. The pomp suggests that dressing up is imperative, but not wearing a jacket is acceptable. Tourists and millennials – no shorts and sneakers, please.

Cashing on its reputation, Del Cambio could serve average dishes, but it chose to treat you with an excellent quality of culinary savoire faire, some borrowed from its fine past, with an added contemporary luxury. The crisp grissini, hand rolled bread sticks, wrapped in a white cloth and served to each table herald the tasty morsels to come.

Thoughtful updates of the regional classics by the ambitious chef Matteo Baronetto elevated the dining experience at Del Cambio recently. The young chef freshened up the menu with more technical, yet delicious touches. “Reflected improvisation”, the gastronomic journey in six or nine courses revisits some Piedmontese classics, but also introduces the new vision of the chef. 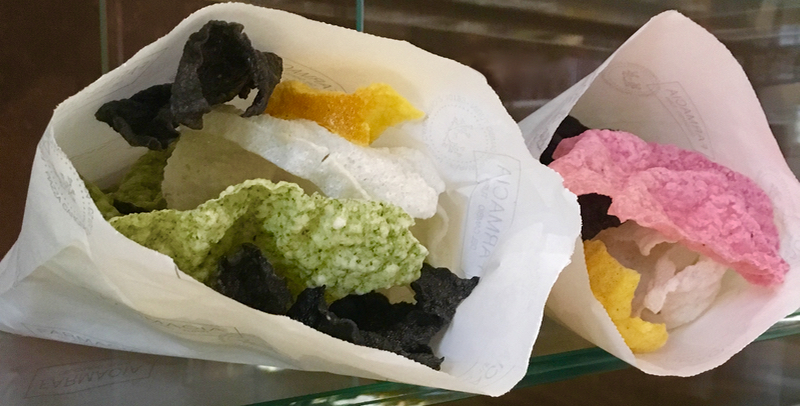 Chirping over an aperitif of Champagne, Italian spumante, Franciacorta made by the champenoise method or starting with the bright acidity, honeyed and nutty with age, local indigenous white variety Timorasso by the glass will land also a gratuity of changing finger snacks and a basket of irresistible colourful rice crackers. Naturally gluten-free, tinted and flavoured with squid ink, vegetables and spices like turmeric, the crisps move your appetite to high-octane gourmandising. You can buy them in the adjoining gourmet café, the Farmacia, named after the previous business, the room now tempts with award-winning pastries of Del Cambio’s pastry chef Fabrizio Galla, who polished his craft in America before returning back the “chocolate capital of the Alps“. His glazed, layered dark chocolate cake Jessica, with an indulgent strip of Tiramisu cream, caramel and exotic fruits, Piedmontese hazelnut Gianduja and the I.G.P. Piedmont hazelnuts crunch in croccantino, won the gold medal at the Coupe du Monde de la Patisserie Lyon in 2007. You can enjoy its miniature with breakfast on the Café’s pavement of Piazza Carignano. 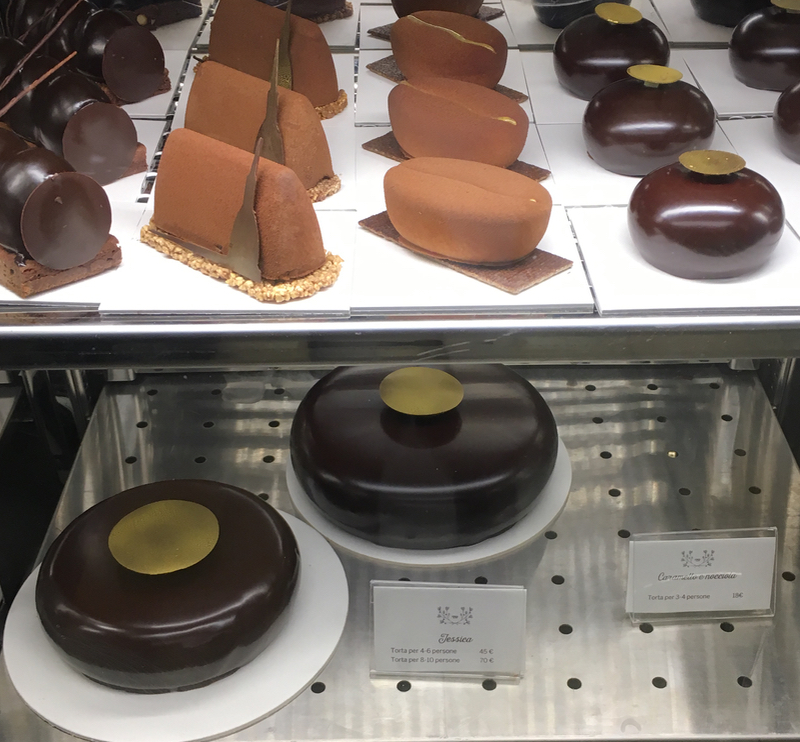 Chef Baronetto’s “Cucina Alta” borrowed from his long tenure at the Michelin-awarded Cracco in Milan and the three Michelin stared Ristorante Duomo in the nearby Alba. Like in the superb Salad Piemontese-style that in the hands at Del Cambio in spring included mostly local vegetables and pulses (asparagus, beans, peas, peppers, radishes,…) but also exotic Japanese shiso leaf and sea vegetables, Parmesan cheese, marinated Amarena cherries, toasted hazelnuts, edible flowers and shoots, bread crust or sticks, house mayonnaise and more. An envelope with the approximate list of ingredients (can change daily due to availability of some ingredients) can guide each bite. In the fall, everything remained the same, but marinated mushrooms, turnips and beets replaced the green peas and spring asparagus tips. 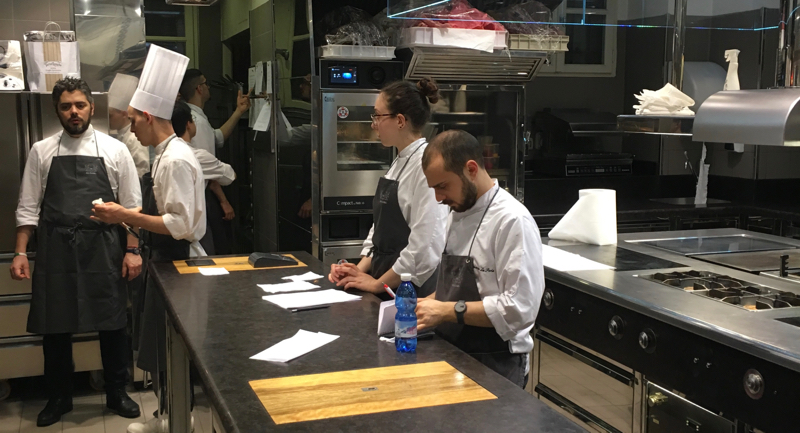 Matteo Baronetto’s tasting menu (€ 110,00 – € 145,00) “shall be ordered for the entire table”. You can eat it casually at the private chef’s table set on the kitchen counter. But even if you go a la carte, you will be treated to little palate teasers such as hazelnut crusted foie gras biscuit, seasonal broth, an intriguing cocoa and traditional white bread or hazelnut crusted leaf-shaped cracker sandwiching green shoots, tonnato sauce and pickles.

From the traditional Starters I love the Vitello tonnato – slices of veal with creamy egg yolk and tuna sauce seasoned with capers. The velvety textured pink veal was more thick, cooked sous vide and served atop the sauce instead of underneath as it is more typically done. Showing off the veal rather than hiding it, generous yet delicate, the sauce rich as it should be. More contemporary appetisers like variables of Red shrimps, hazelnuts and persimmon with passion fruit, or Codfish with pumpkin and saffron change slightly each season. 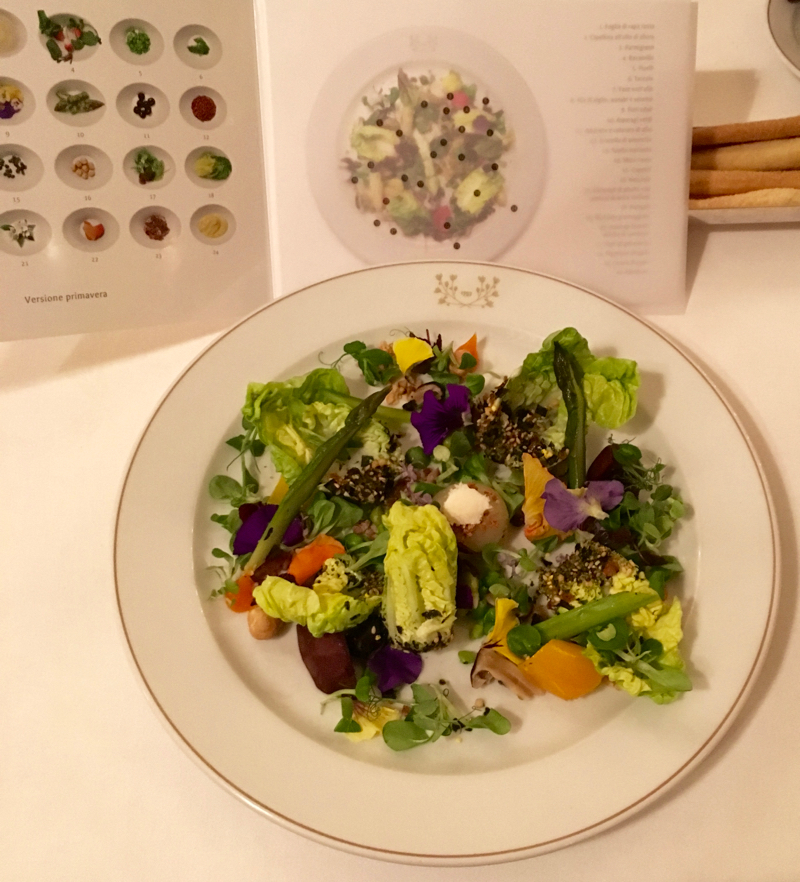 Another classic, the ‘Del Cambio’ home-made fresh egg tagliolini, the thin egg pasta locally labelled as tajarin, with butter and the optional but highly advisable truffle shaving are a must for pasta lovers. During the white truffle season (November – January) you can add this edible gem from Alba to scrambled eggs, cheese, pasta, the Del Cambio risotto or some simpler meat plates. In the First Courses the Milk ravioli with anchovies and cauliflower are one of the more contemporary dishes.

In the city where the new mayor boosts to make Turin vegan friendly, Del Cambio is not the place even for vegetarians, unless you pick from the limited options in the first courses and starters or beg the chef to create something purely plant-based. 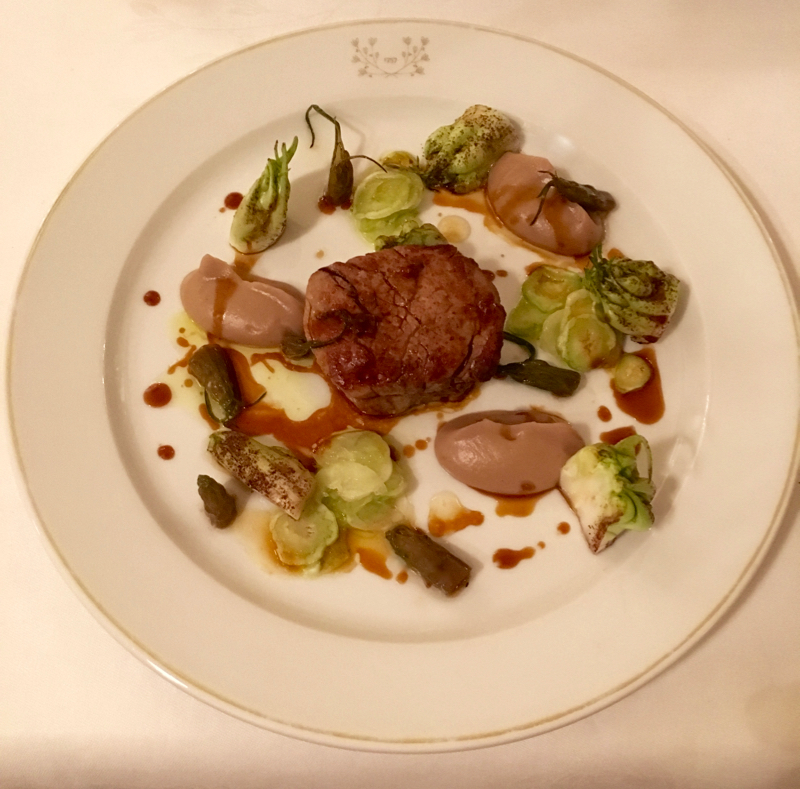 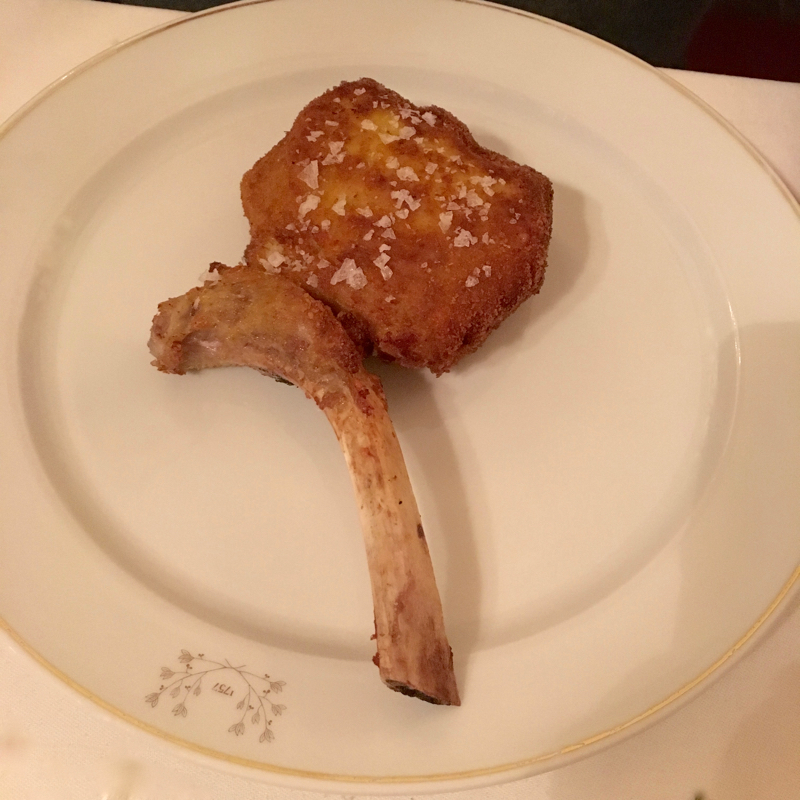 The Mediterranean coast is only about a two-hour drive so the red mullet, sea bass, sole and turbot, all prepared with the chef’s original touch, are good main course options.

For dinner went more local for the occasional treat of the Piedmont veal. My medium cooked, juicy Roasted veal fillet was tender in its jus with a wrath-like company of chicory heart, chestnut puree, asparagus and rosemary. My husband enjoyed the simple breaded Veal ribs Milanese-style on the bone with salt flakes and a side of roasted potatoes, artichokes and Jerusalem artichokes. For adventurous carnivores the nose-to-tail eating is embodied in ‘Del Cambio’ finanziera, the Middle-Ages classic Piedmontese offal (left-over parts from poultry such as cockerel crest and cattle’s innards). There is also chicken, pigeon or dear in season on the menu, reminding of the nearby regions.

The cheese trolley is all Italian including many local cheeses from small artisanal purveyors. Tallegio and Robiola are my tips. Even if you do not order desserts a sweet assemble of mignardises accompanied by in chocolate covered hazelnuts, sugar dusted almonds, paper-thin dehydrated fruits like orange, apple and pineapple, will be served free of charge after the meal. 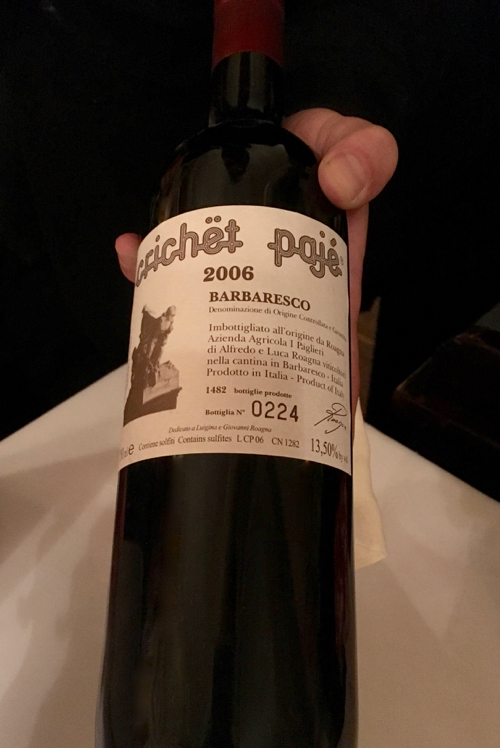 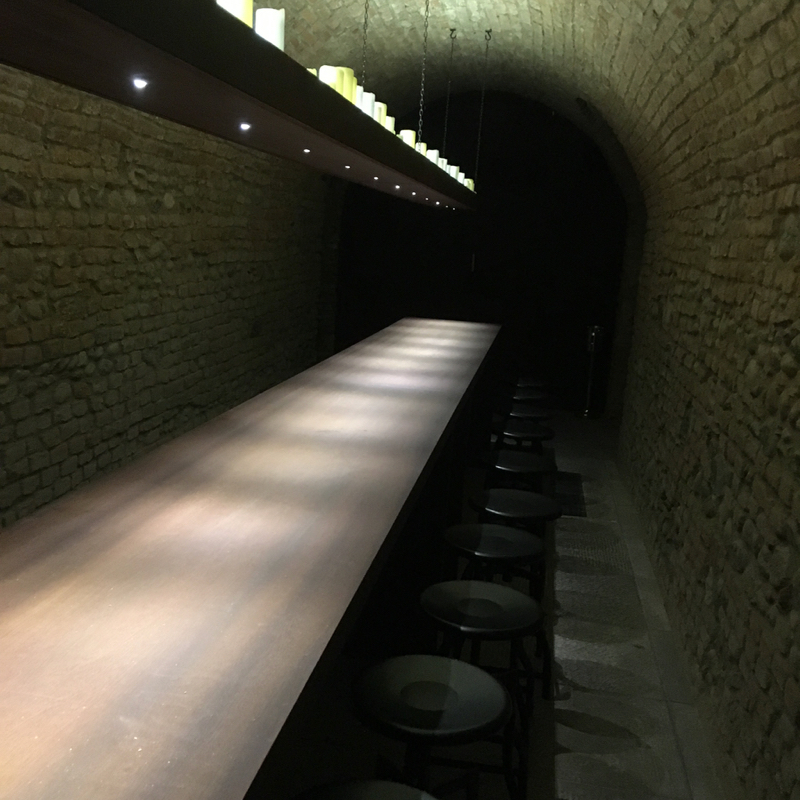 Accept the sommelier’s invitation to the old underground cellar (known in Italy as cantina). As you descend to its stone cavity, the generously stocked sparkling wine room hints at the locals’ penchant for Champagne. Barolo used to produce sparkling wines, therefore bubbles were imprinted into the Piedmontese DNA. The sommelier, Davide Buongiorno had a different explanation though: “Here in Piedmont, we drink sparkling wine to refresh our palate after the dry tannins of the local reds”.

The sommelier was honest so we trusted his choice and went for a pricier Piedmontese bottle than usually (nearby Enoteca Tre Galli offers better deals on wine). We were smitten by the Nebbiolo-based Barbaresco by Roagna in the promising 2006 vintage. The elegant, and constantly evolving wine with a minimal use of sulphites and never seeing pesticides kept our heads fresh the following morning. Del Cambio charges more for wine than most consumer-friendly Italian restaurants, but their cellar is fantastic. There are some more affordable, great bottles like the Montestefano from our favourite family winery RivellaSerafino in Barbaresco (€ 90). Occasional wine tastings are organised at the long table inside the cellar. 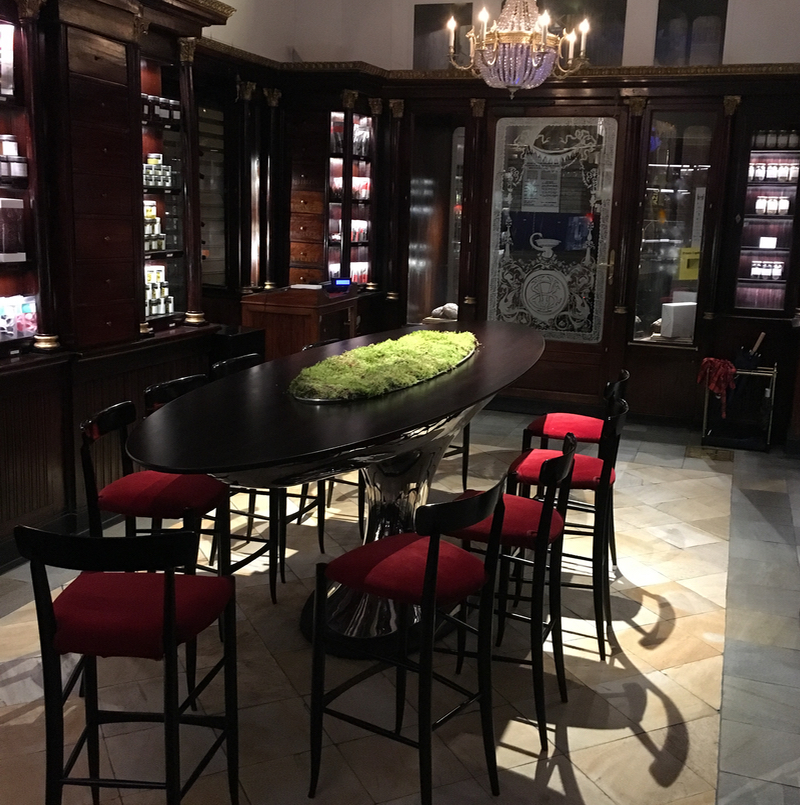 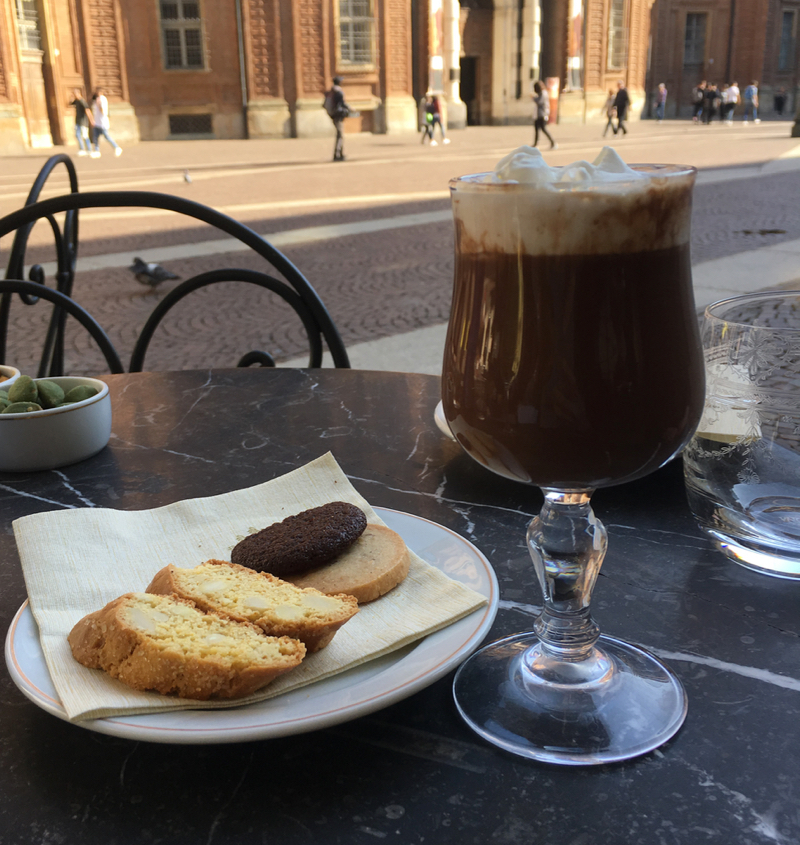 I dined at Del Cambio in November 2012, March and late October 2017 and the culinary transition to the new chef felt smooth. The chef keeps serving some traditional plates, while inviting to the new millennium with his more creative, high cuisine experiments. The crème de la crème of the Italian upper class still gathers at Del Cambio. It is a special treat, but if you are passionate about history and great gastronomy Del Cambio delivers. On sunny days while passers-by watching, casually lounging on the pavement in front of the Farmacia, you can enjoy the local hot chocolate speciality Bicerin, where espresso and cream melt so indulgently. Cappucino is of course made perfectly, and house baked almond cantucci biscuits and cocoa cookies will be served with any hot beverage.
Piazza Carignano 2, 10123 Turin, Italy
+39 011 54 66 90; email: cambio@thi.it