The chef blends Mediterranean flavours with exotic spices. Most of the dishes include some vegetable or herb either playing the first violin or just tuning the other food instruments on the plate.

Le Gourmet restaurant at La Coquillade village is now in hands of Alain Ducasse trained Michelin starred chef Thierry Enderlin. His culinary repertoire spans from Spain to Thailand, and you will taste these influences in the contemporary French cuisine here in Provence. Using mostly local ingredients and growing aromatic herbs, flowers and some vegetables in the organic garden of the Domaine, only light sauces accompany chef Enderlin’s by French tradition inspired plates of Le Gourmet at La Coquillade.

When the warm air graces the broad valley of Luberon with the eternal buzz of cicadas usher a relaxing mood, sitting outside on the terrace of Le Gourmet at La Coquillade is highly desirable. Flocks of vineyards surrounding the Provençal domaine, wooden furniture, linen and beams in and outside on the peaceful terrace set you in a lush countryside mood. Dress comfortably, yet not too casual since, despite being in the middle of nature, you are still dining at a Michelin starred establishment. 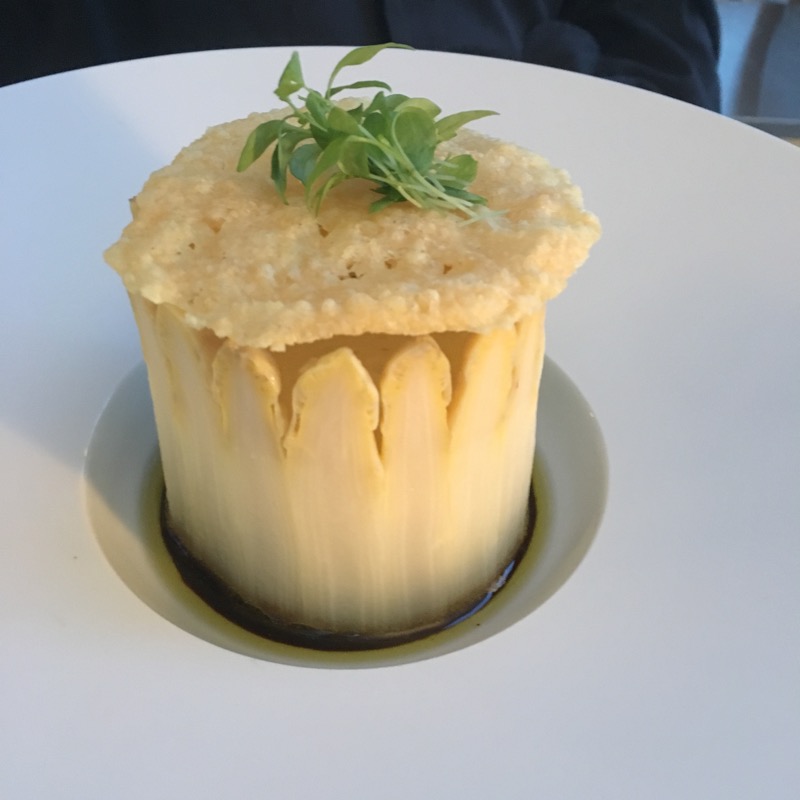 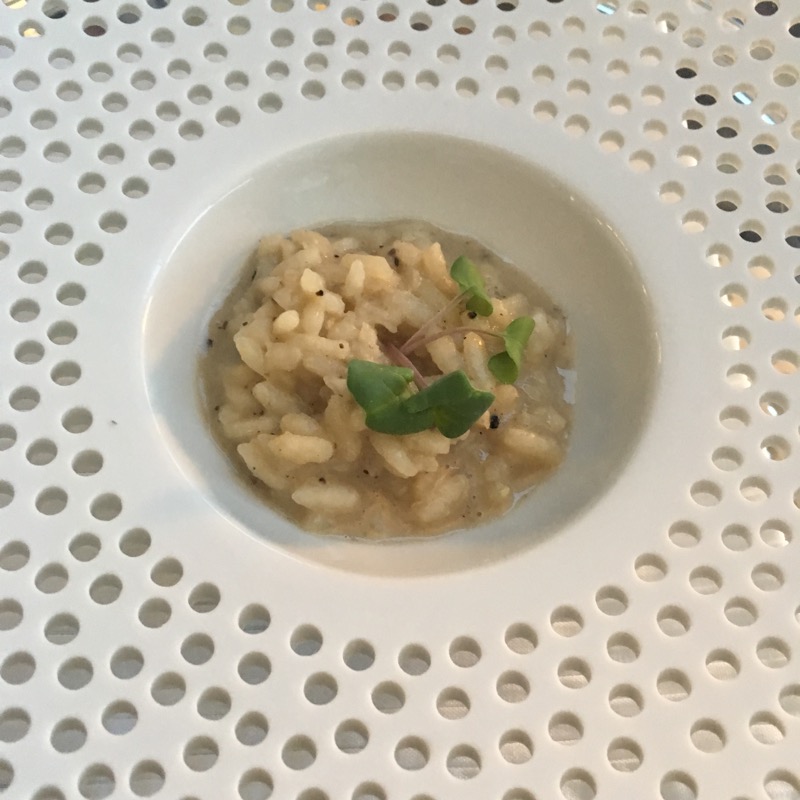 The food is artistic with vibrant colours and textures. The chef blends mostly Mediterranean flavours with exotic spices. Alluringly, the dishes include some vegetable or herb either playing the first violin or just tuning the other food instruments on the plate. The simple risotto is the chef’s signature plate, and if you do not order it, you may be treated to a small portion as an intermezzo, which was a welcome treat during our recent meal at Le Gourmet restaurant at La Coquillade. The food before the new chef’s arrival was also very good, much better than the nearby Michelin stared Le Phébus, but it was perhaps too Asia influenced and not fitting into the local scenery. You would be served something like Beignet de mini carotte fane au cumin, sauce thaï, a vegetable tempura with spicy, sweet-sour and soy-like varieties of sauces. Delicious but not the freshest expression of the Provence Verte. 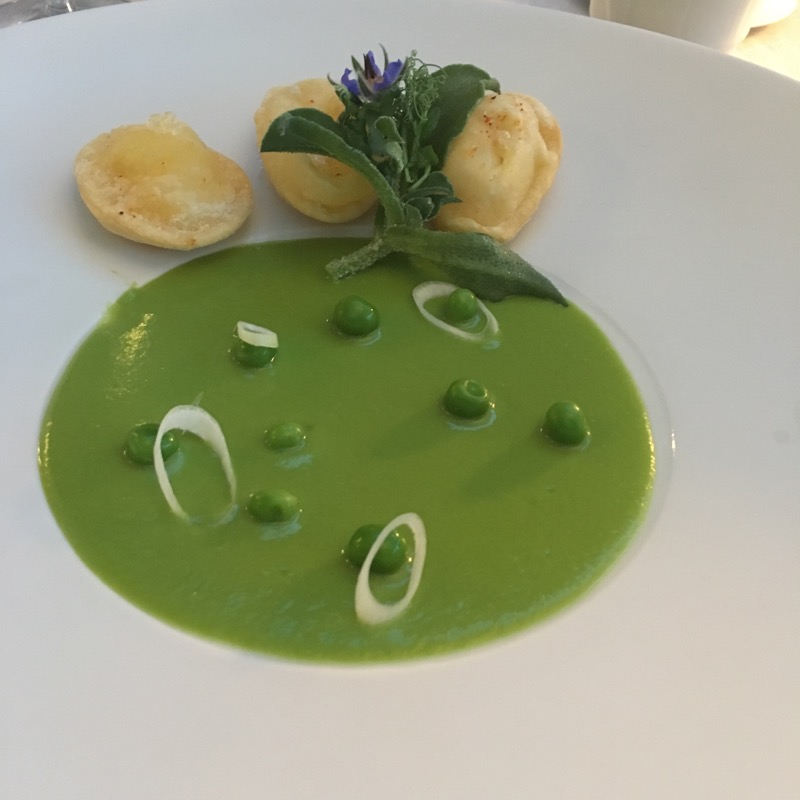 In spring, the Green Pea soup with cream and fresh mint, borage leaves and its violet flower, was served with fried crispy raviolis stuffed with fresh ricotta-like cheese. The velvety soup was superb, light yet rich at the same time as the side dumplings, perhaps by mistake titled ravioli, were generous enough to satisfy a vegetarian craving. We caught the white asparagus season, here at La Coquillade celebrated like a design piece in a dome of sliced asparagus planks hiding a strong broth, covered by a crisp parmesan hat and fresh oregano. Now, I was not sure which of these vegetarian starters I liked more, both were so good!

One of the chef’s specialities is pork from nearby Mont Ventoux. As if climbing the iconic Tour de France summit, the pork was long cooked as a confit, served with an organic white bean purée, octopus and Spanish piquillo chilli pepper, the pork jus and spiced with the French piment d’Espelette. While not being a fan of pork my husband liked its tenderness and unique spicy taste. 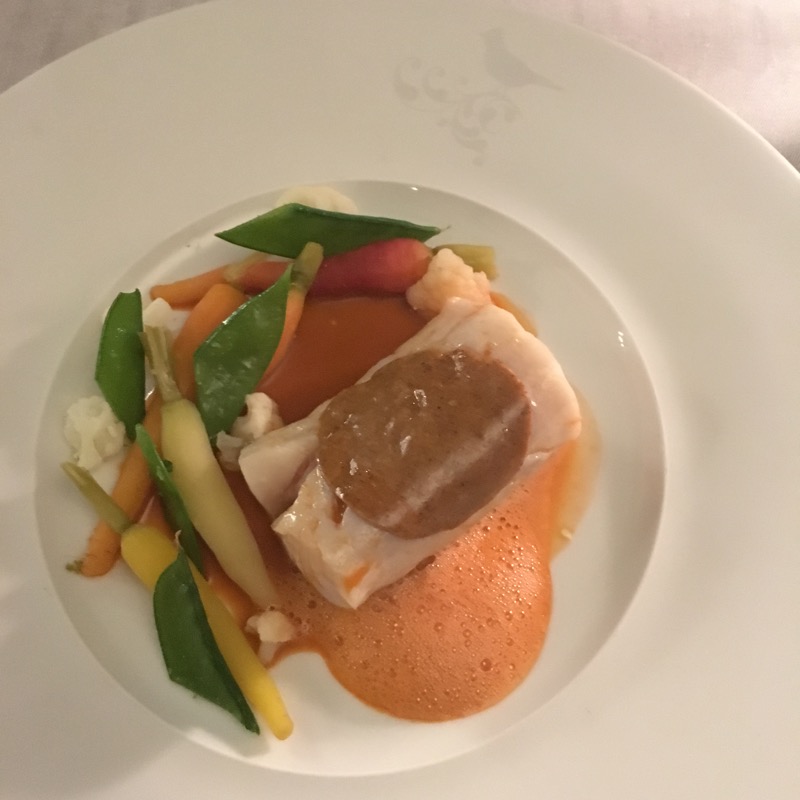 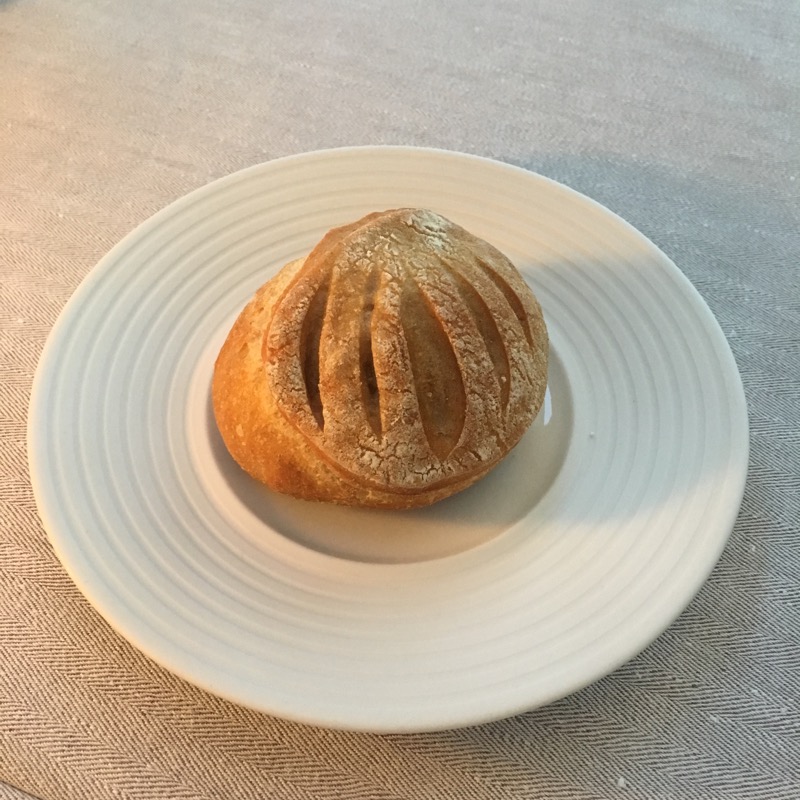 My Atlantic steamed half-salted cod topped with a praline of almond crust with organic curcuma, cauliflower, colourful young carrots and Greek style marinated mangetout, carrot and combawa (also known as Kaffir lime) foamy emulsion was delicately handled and the crunchy blanched vegetables juicy with their natural fragrance were better with the chef’s sauce than the fish itself. The cod was getting slightly lost in the fragrant sauce.
French cheese selection sourced from M. René Pellegrini was offered on a trolley for anyone to pick to his liking. I liked many and my plate was packed with eight slivers. A fig house jam was served with the cheese. Although mostly local ingredients are used in Thierry Enderlin’s cooking, in some, like the dessert of the sweet cross between the wild and big strawberries known as Mara des bois in France served with with Taggiasche olives, Bourbon vanilla ice cream, egg, and underlined by the Iranian pistachios. 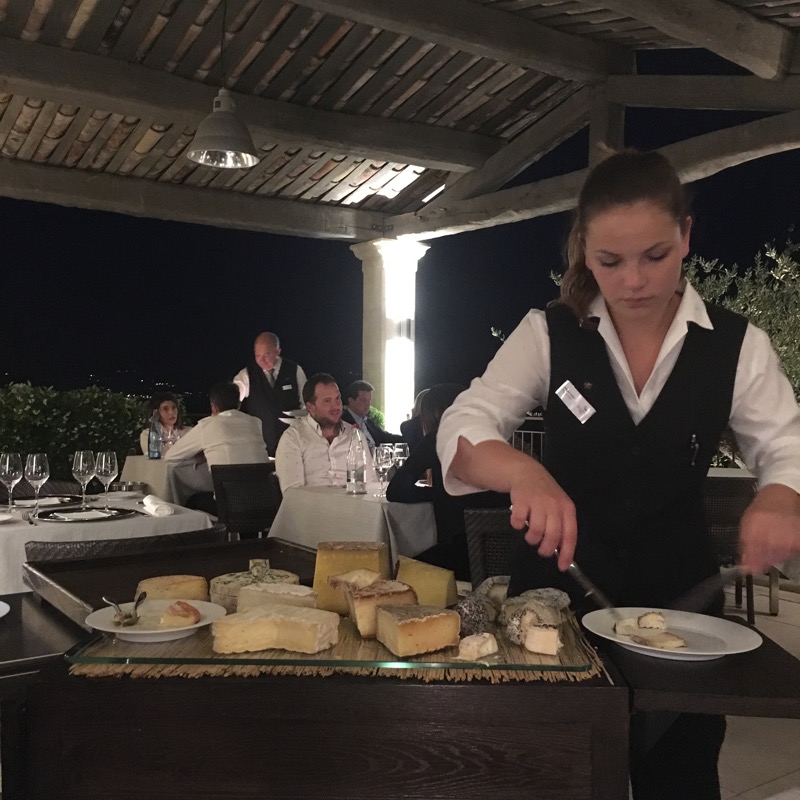 The tasting menu can consist of three, five or seven courses. Like the Alain Ducasse‘s “naturalness” his pupil promotes the best seasonal vegetables and herbs on his menu as well as the Landes poultry, but finding his own voice in the use of exotic seasoning and spices sets Le Gourmet onto its own gastronomic trail.
Inside, lavish chandeliers play the rural game under the beams of the farmhouse ceiling and natural hues of the furniture.
Drinks: From the very affordable Aureto wines made here at the Domaine La Coquillade through other local interesting wines to some of the French icons, the wine list has too little to offer from many French regions, and needs improvement. We found a pricier red Clos Vougeot from one of our favourite Burgundy producers the Domaine de la Vougeraie. Not for everyday drinking but it was perhaps the best bet on the otherwise very commercial wine list.
Cuisine: Provençal gastronomic
Visits: August 2012 & May 2017
Tue-Sat dinner seasonally from mid-April till the end of October; July-Aug also Mondays
+33 0 490 74 71 71
La Coquillade: Demeure de Prestige; 84 400 Gargas; France