As if someone had sunk the mountain range millennia ago and let only the most alluring tips of the Alpilles stick out, gazing over, you realise that nature has blessed this verdant landscape with beauty rarely seen anywhere else. In this romantic theatrical staging L'Oustau de Baumanière invites to an unforgettable Provençal gourmand escapade.

Baumanière has hosted heads of states, the European royalty, artists and celebrities in its tranquil sanctuary in the heart of the slow life Provence. The appeal of the two Michelin star restaurant L’Oustau de Baumanière in the oldest building of the twenty-hectare Relais & Châteaux estate dwells in its stately Provençal dining, yet there is much more luring the well-travelled guests in. 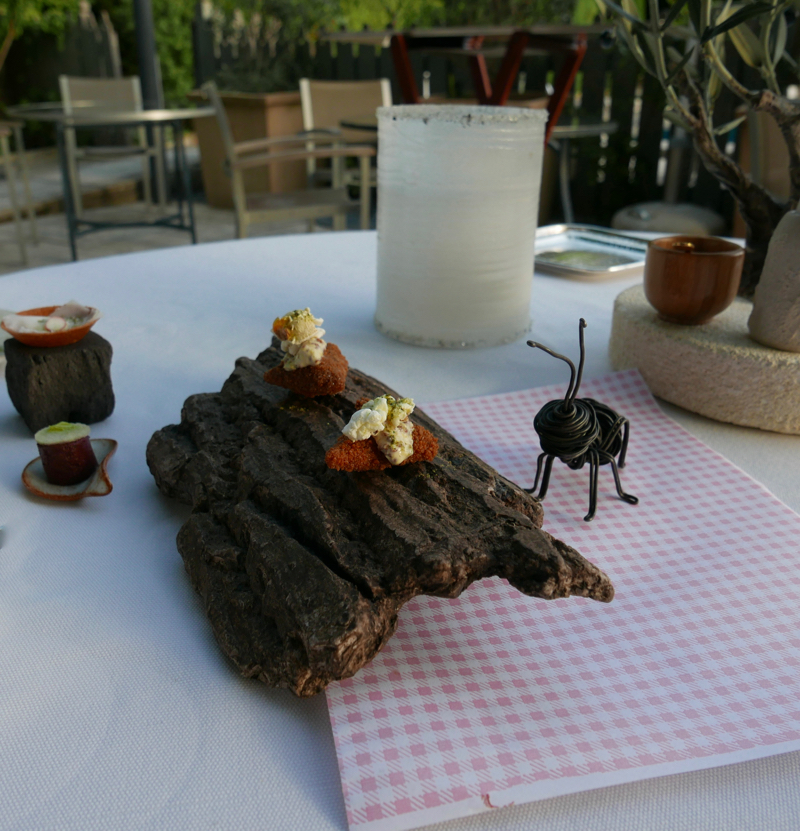 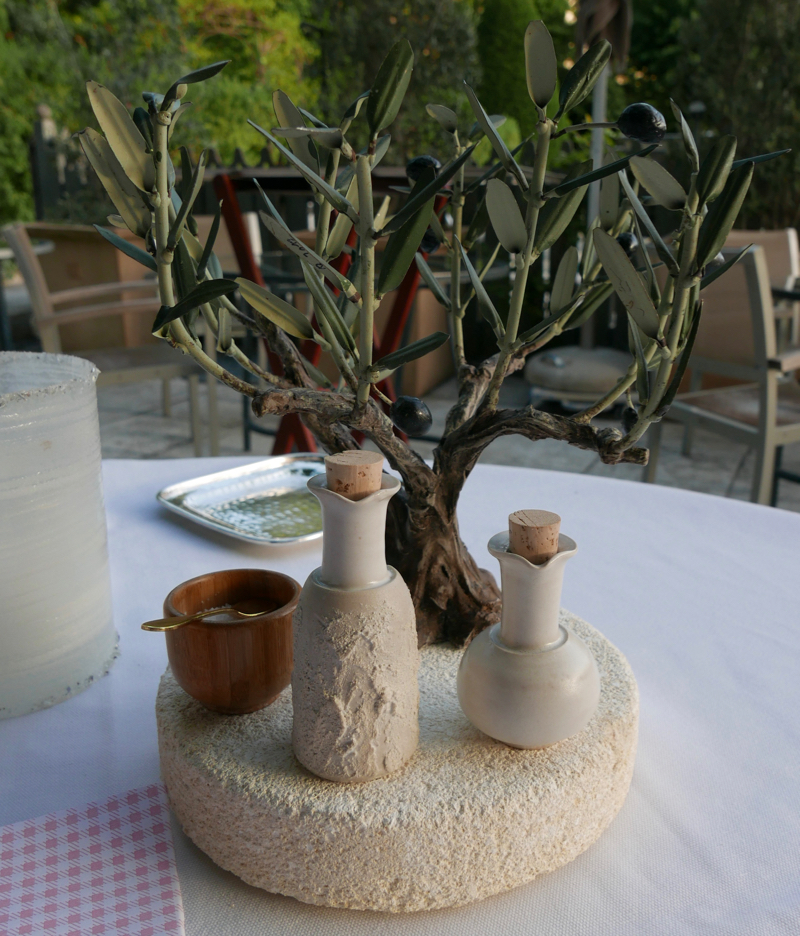 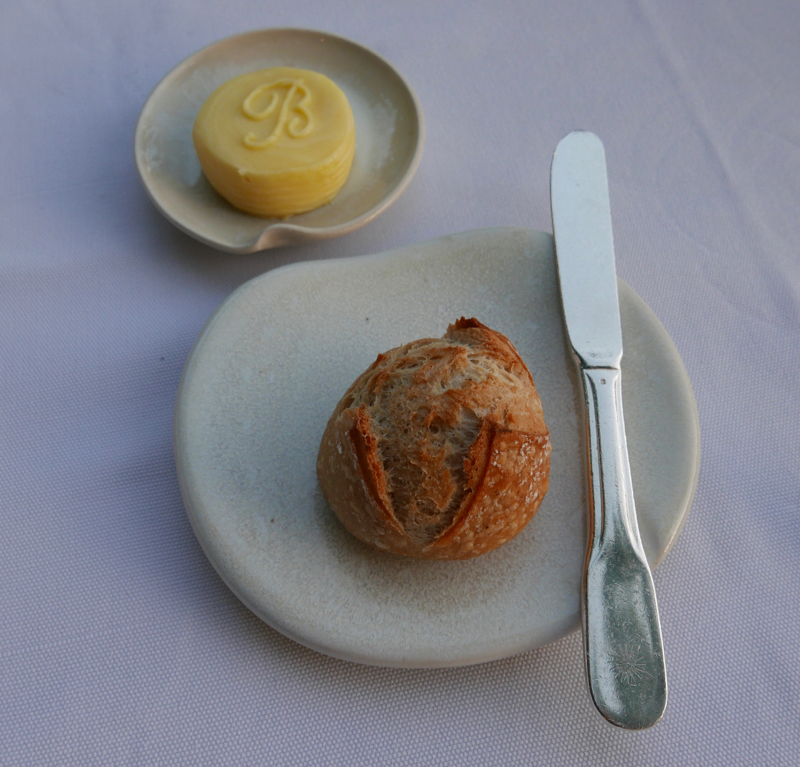 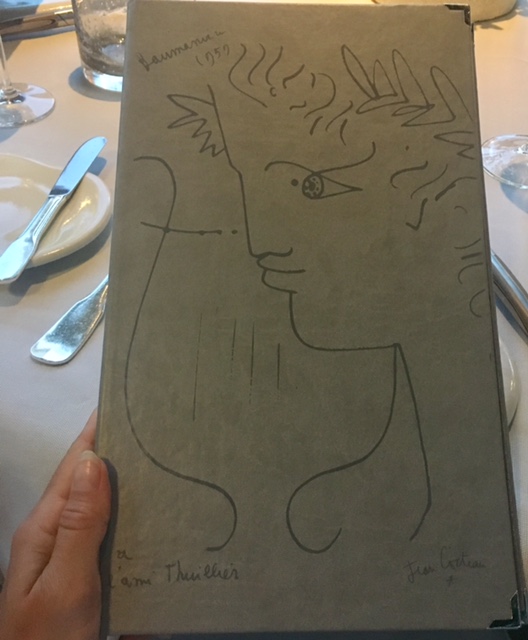 Provence in its most intricate setting

If you wander to this nested private hotel retreat during the summer, L’Oustau terrace facing the rocks topping Romanesque Les Baux-de-Provence village and the peaking Alpilles opposite, seduce into traveling to Baumanière yet again. As if someone had sunk the mountain range millennia ago and let only the most alluring tips of the Alpilles stick out, gazing over, you realise that nature has blessed this verdant landscape with beauty rarely seen anywhere else. The only noise that may bother are the crickets not ceding their musical territory until the depth of the summer night. The suffocating heat of the day is good only for a splash in one of the three hotel pools, while the birdsongs of the evening lure into a long dinner escapade. In this romantic theatrical staging L’Oustau de Baumanière invites to an unforgettable Provençal gourmand escapade. 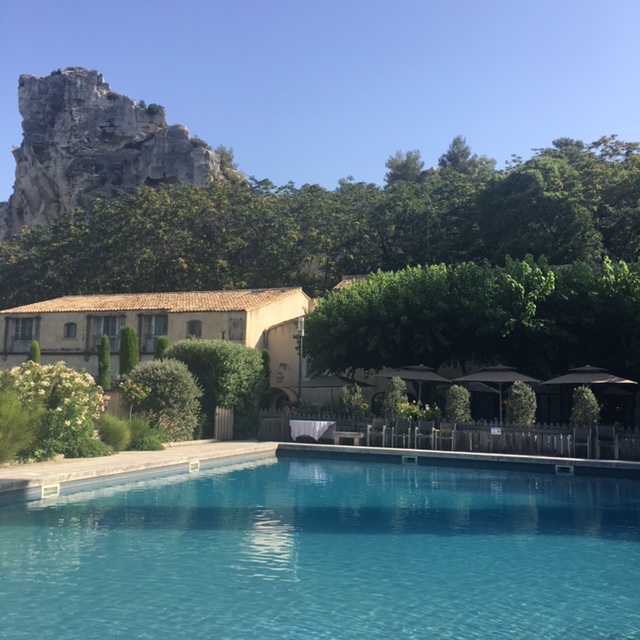 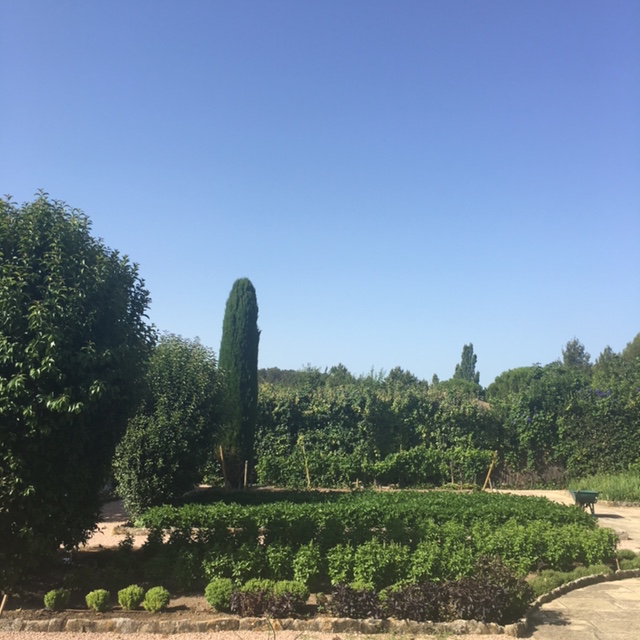 Like jewel cushions for the two Michelin food, the ceramics by Cécile Cayrol workshop in Arles delicately underscore the authentic creative cuisine, while the iron trees by Joël Rebière are freshly decorated with local olives. Just pick and munch.
On the table set throughout the dinner the knife by Le Thiers accompanies you all the way to dessert. Local olive oil by Domaine Castellas can be poured over bread, and the cheese is supplied by the family-run cows breeding Roumanille in nearby St. Rémy de Provence. French butter is not left out, unctuous.
The menu features a drawing by one of the former guests, the French artist Jean Cocteau. Like Saint Paul du Vence, L’Oustau de Baumanière was frequented by the cream of the European high society in its heyday. 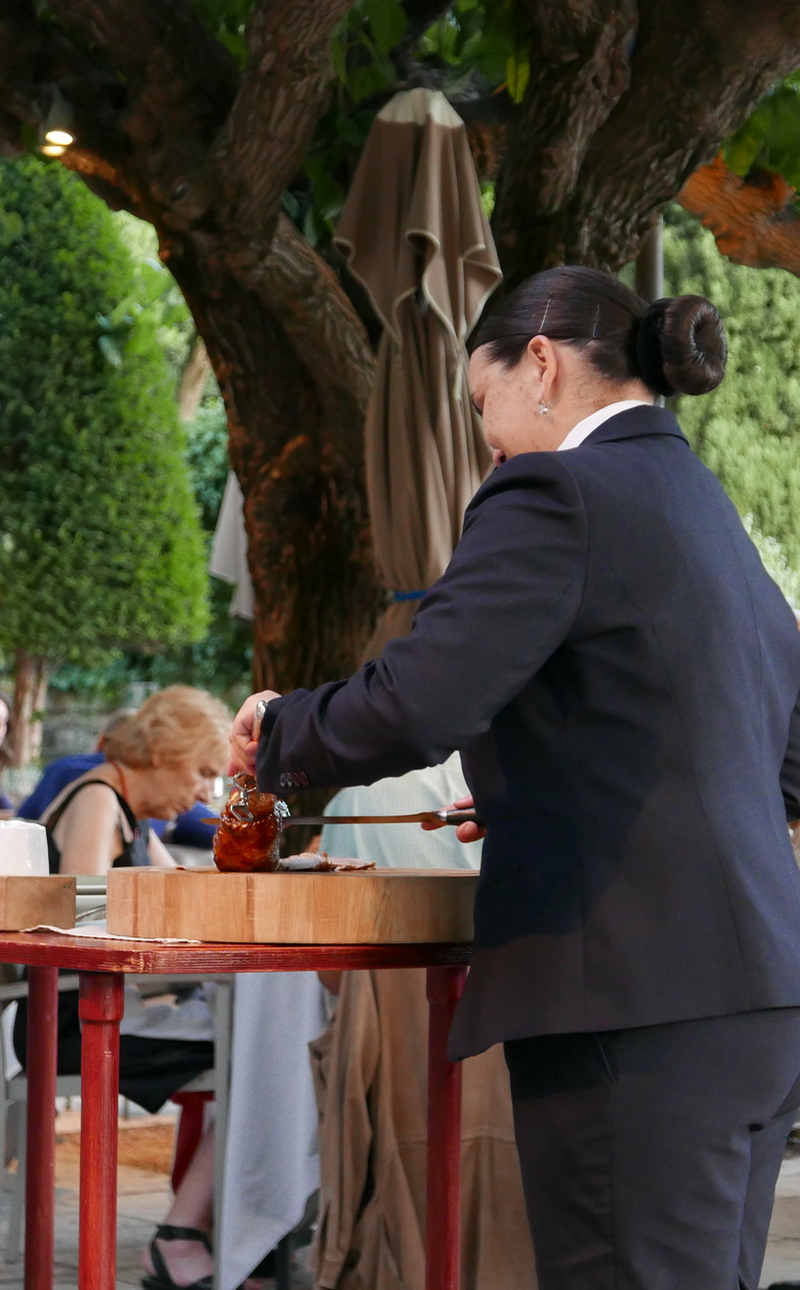 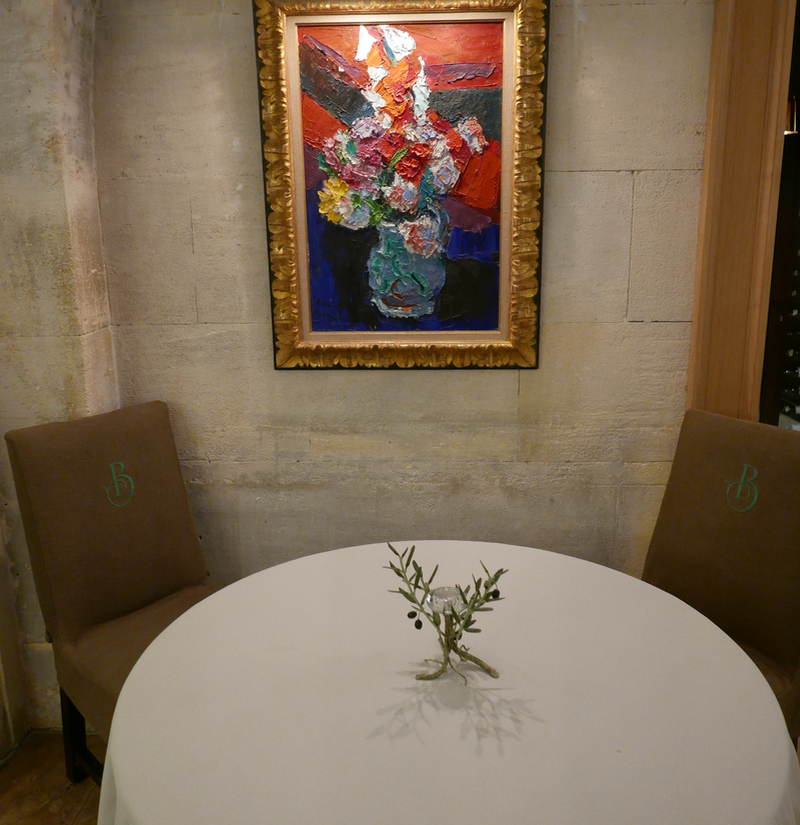 Landscaped gardens are the soul of the Provençal property, roses, lotus ponds and centuries old plane trees knit the walking paths between the country houses of the sprawling hotel. The organic garden next to the regional produce inspire the chefs at the Baumanière restaurants. The peas and Pongo French beans are the biggest pride of the potager. L’Oustau de Baumanière though has been offering a vegetable based tasting menu for decades, so on the second dinner there I was excited to go veggie. 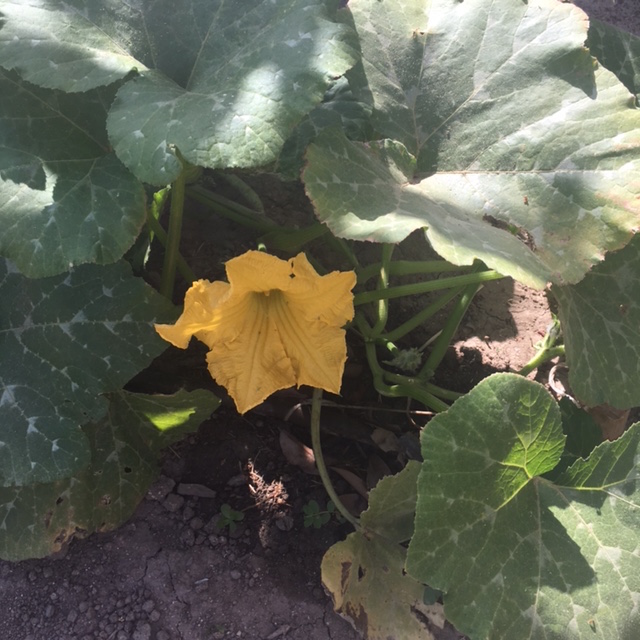 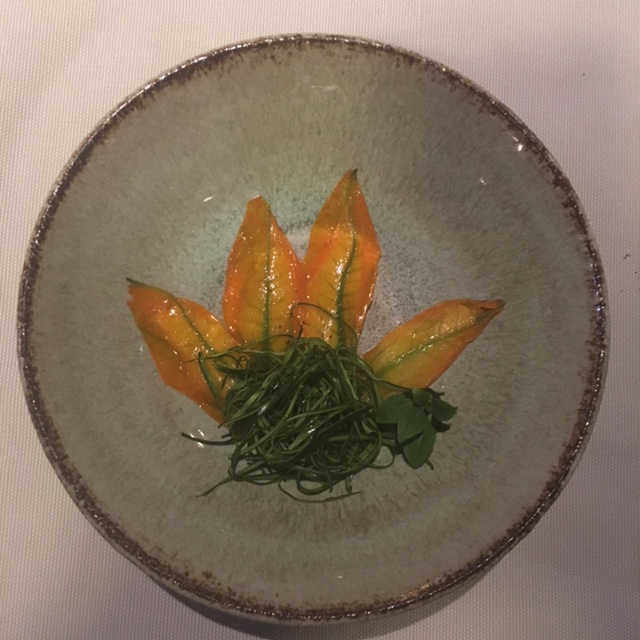 In July, summer squashes, strawberries, rhubarb, tomatoes, onions and many herbs were peaking. The courgettes planted near to a small goat compound were flowering so we were lucky to enjoy their seasonal bloom in different dishes each night. As a side dish ravioli with John Dory, where pasta were elegantly substituted for the deep yellow petals of the courgette, and on a plate on their own in the vegetable tasting menu. The stuffed flowers were attached back to the trimmed zucchinis with a black olive coulis. There is seafood and meat of course. Pork, Provençal lamb, veal, red tuna from Tarragona served raw as a la carte starter. The tuna was exquisite, tender, and my husband relished both the pork and the lamb in the signature Ballade des Baux menu. 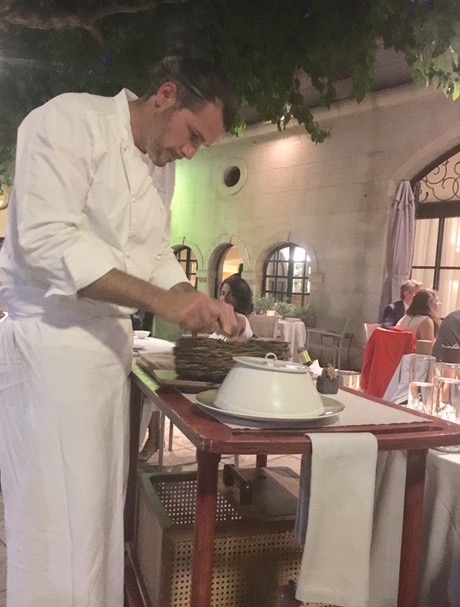 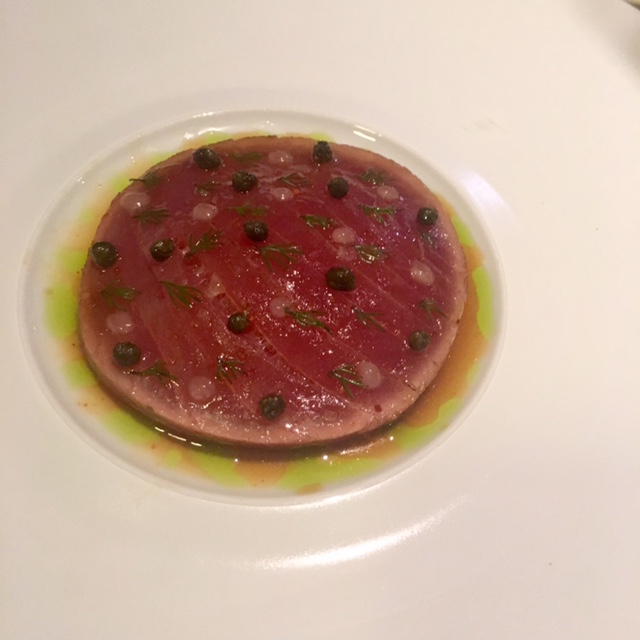 After over 70 years of an impeccable service the third generation of the Charial family runs and greets the guests at the restaurant. Jean-Andre Charial still plays with some recipes, but in the kitchen now the youthful biker with a pony tail and a wicked beard Glenn Viel is now in charge. As he served the main courses at the tables, his elegant handling of each morsel spoke loudly about how much he cares about his culinary oeuvre. His gastronomic skills were seasoned at Le Meurice, Plaza Athenèe and Hyatt Regency in Paris and at the Kilimandjaro in the upscale ski resort of Courchevel. One of his ideas showcasing the authentic flavours of seasonal Provençal produce were the tomatoes drying under the piercing sun into tomates confites that welcome you like an art work under a protective glass veil on the restaurant’s tree shaded terrace.
RECIPE TOMATES CONFITS A LA BAUMANIÈRE: Blanch red tomatoes, cut them in half and discard the seeds. In a mixing bowl mix them with salt, caster sugar, pepper and a powdered herbs mix (thyme and rosemary). Place them on a grid above a deep dish or tray. Top each slice with garlic and let for at least eight hours on the sun. 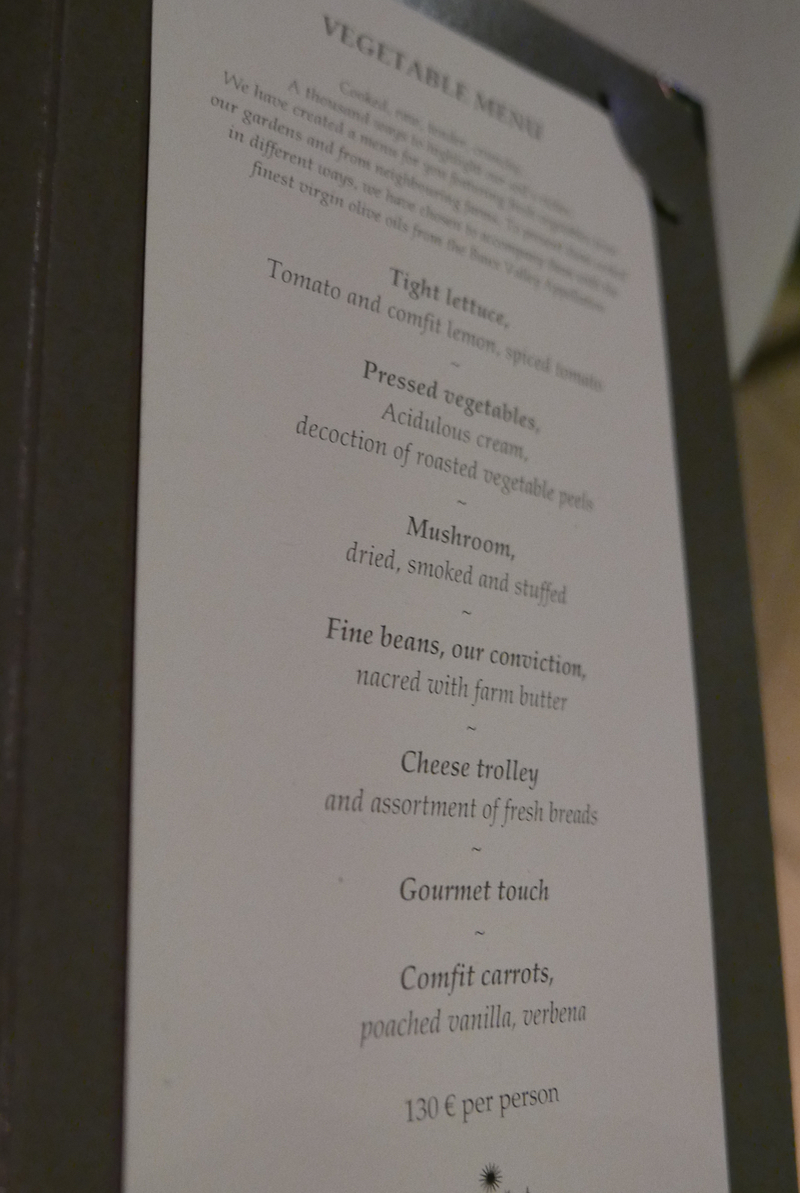 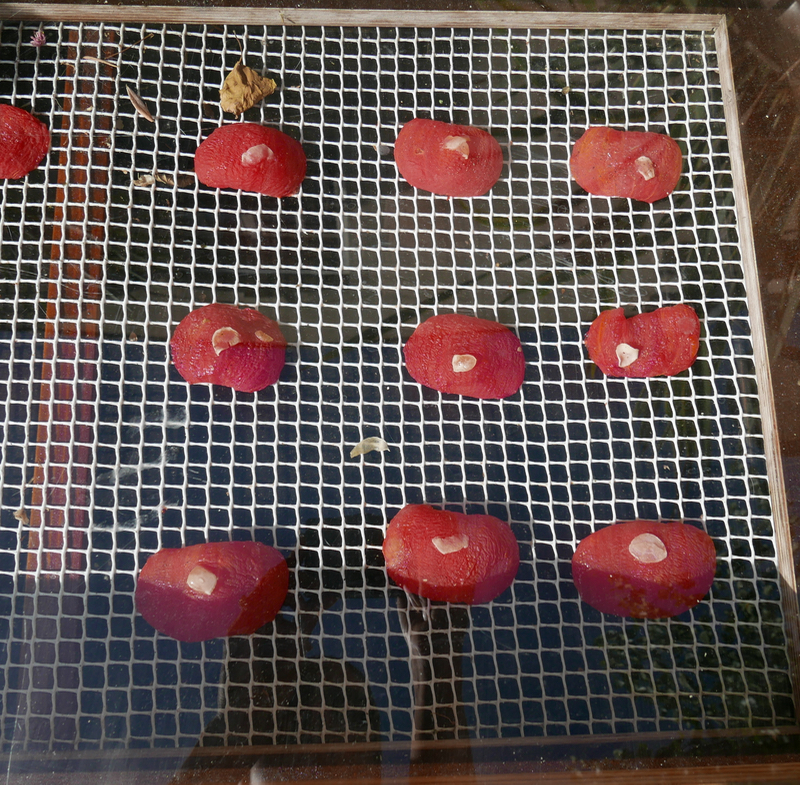 The food service is highly personalised at Baumanière. Right at the start you may notice that not everyone on the table gets the same amouse bouche. Depending on your selected dishes or menus the bread is also varied and small, so you will fit it in. A green hued basil bun (quite disappointing) to start one day, while the other the superb country bread was et on the plate next to the ‘B’utter. Bread is sacred at L’Oustau de Baumanière since bread pairing is suggested next to wine pairing here. The head sommelier Gilles Ozzello has been guarding the gems storing cave for almost four decades and his pleasant attitude makes the harmonious wine service outstanding. His trainees are enthusiastic, sparking with theoretical know-how. The young Chinese sommelier was diplomatic and despite her lack of experience with the wines offered she described them quite well. Still, ask for the senior sommelier if it is his shift. We went for the exquisite Châteauneuf du Pape Château Rayas 1983 and 1989 vintages, where the older blend enchanted us sooner with a tobacco leaf scent, energetic black fruit and impeccable softness. The 1989 was more contemplative with resinous nose moving into animal leathery and kirsch richness. Both beauties and beast with a long story to share with even the most demanding palate. The wine list is outstanding and the prices quite fair for a Michelin place. 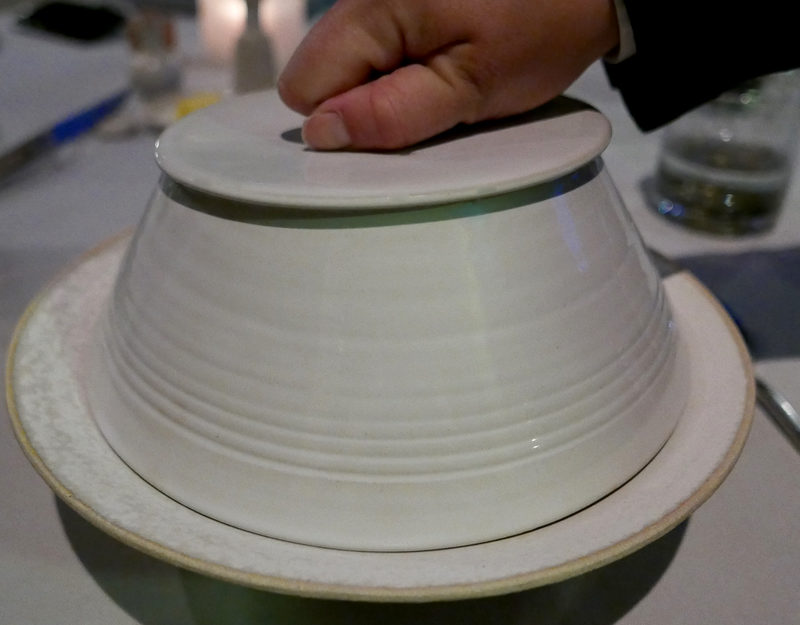 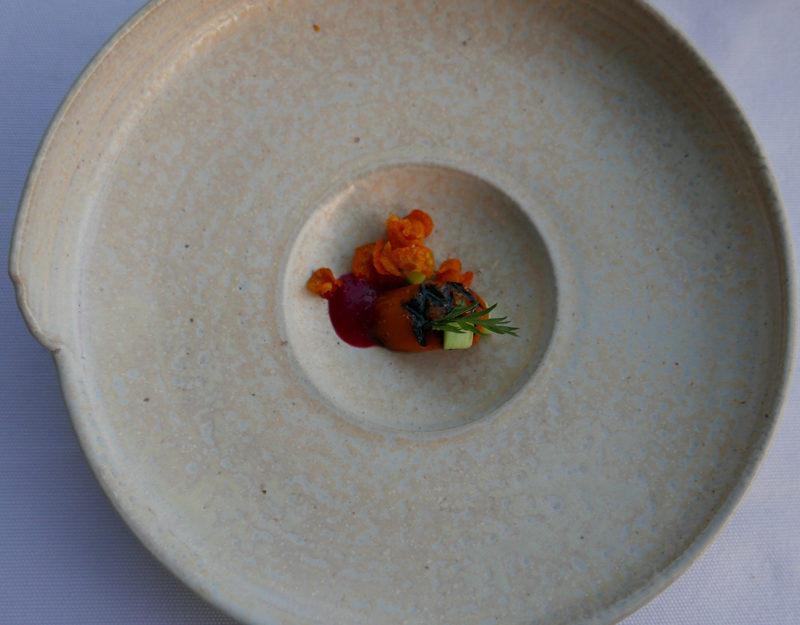 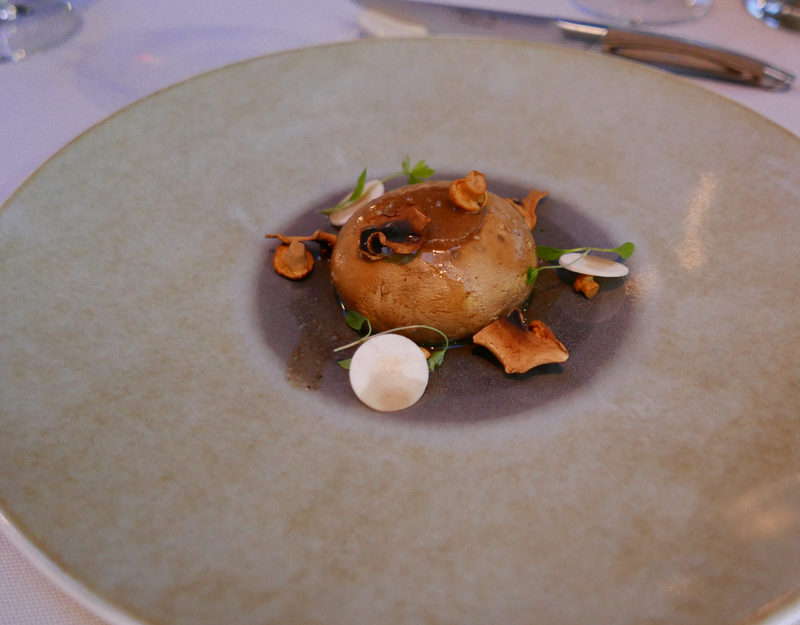 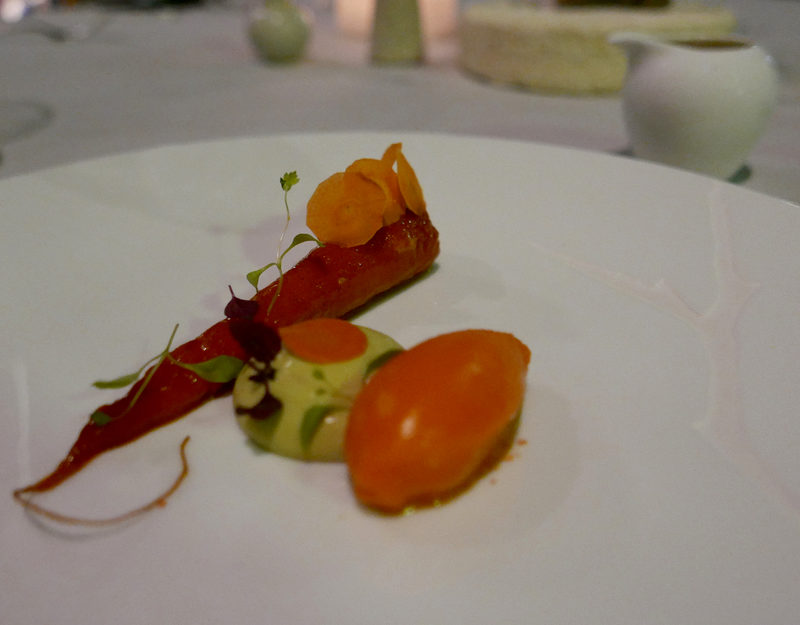 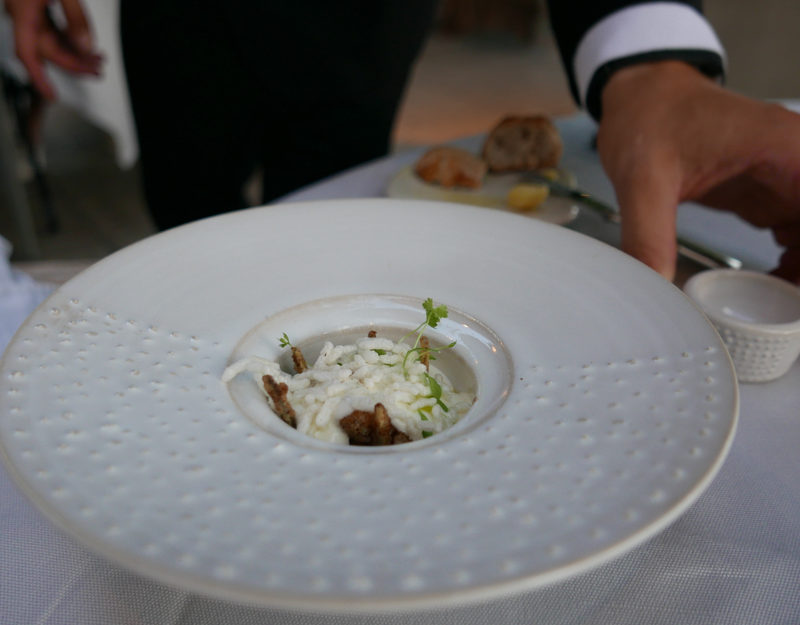 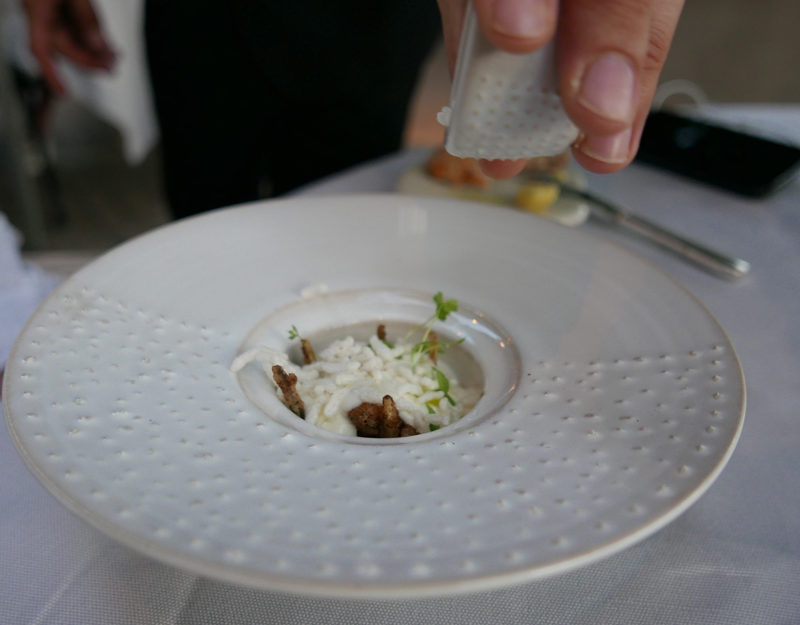 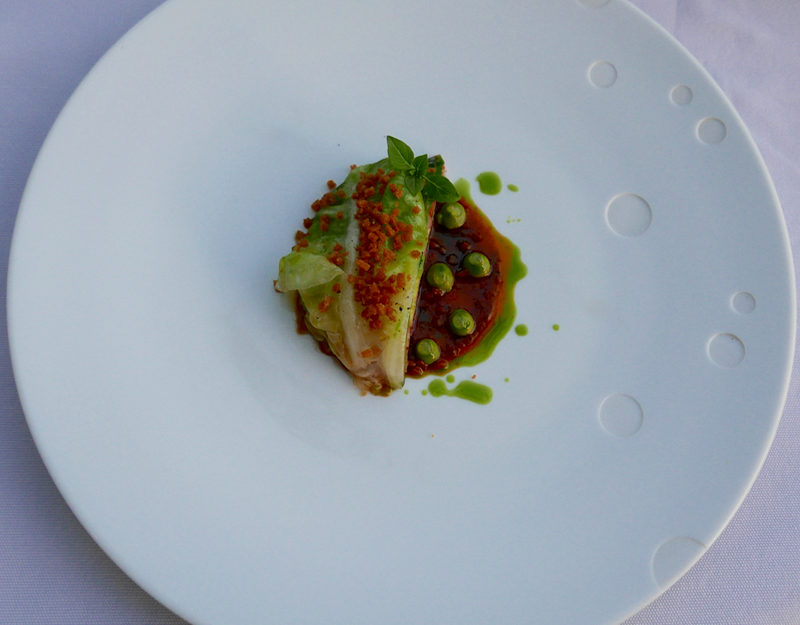 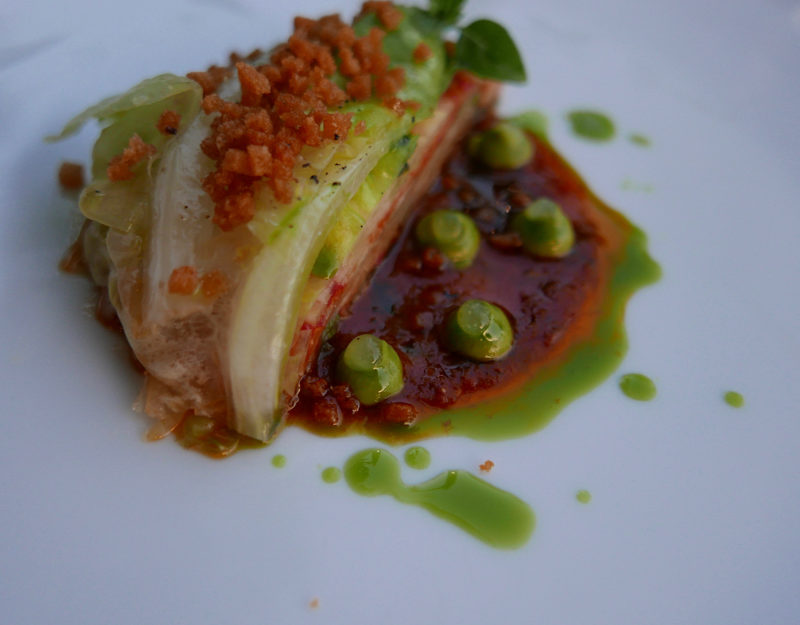 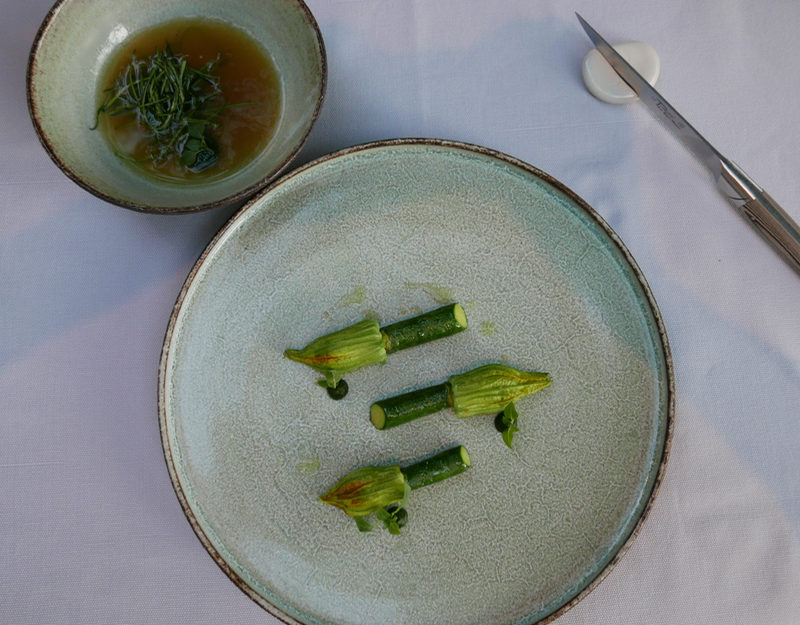 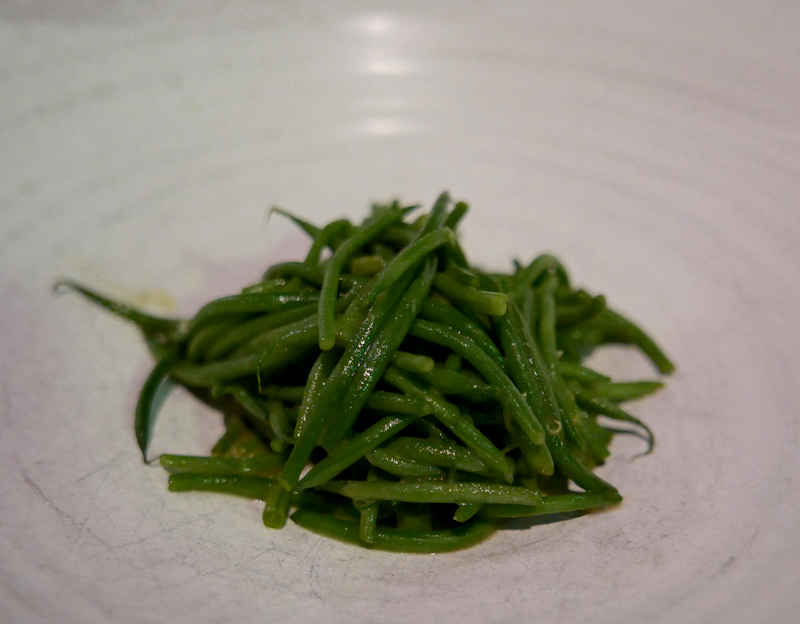 Jean-Andre Charial has been one of the first chefs in France offering vegetables focused tasting menu and his tradition continues today with the new chef. Not just because of the almost half price (€130) of the signature Ballade des Baux menu (€215), but because vegetables in season are at least as intriguing as the best quality animal protein raised, you should consider trying it at least once. Starting with baked Carrot with carrot mini chips and strawberry coulis, and moving to a generous Lettuce layered with marinated tomatoes, basil, bread crumbs top, I was poised for more. A spelt bread was served with the next course of Courgette tenderly cooked with courgette flower stuffed with the minced courgettes and herb pesto served on a side with excellent courgette broth, a dollop of courgette puree and shaved courgette skin – my favourite plate elevating the star vegetable perfectly. A buckwheat bread came with the large Mushroom stuffed with onion mushroom mince, a cream sauce and baby girolles mushrooms with smoky, dehydrated mushroom slices. Rich, earthy, deep soft yet crunchy. My favourite country bread accompanied the simple, super thin String beans cooked in salt water and seared with butter. The cheese course after was paired with a nutty country bread. One of my French favourites, the superb Brillant-Savarin triple cream cheese, a local pyramid shaped goat cheese, olive oil washed goats cheese, for 48 months aged nutty and salty Comtè, all excellent, but the fresh goats cheese from Marseille area was the most memorable sliver of cheese I had in months. 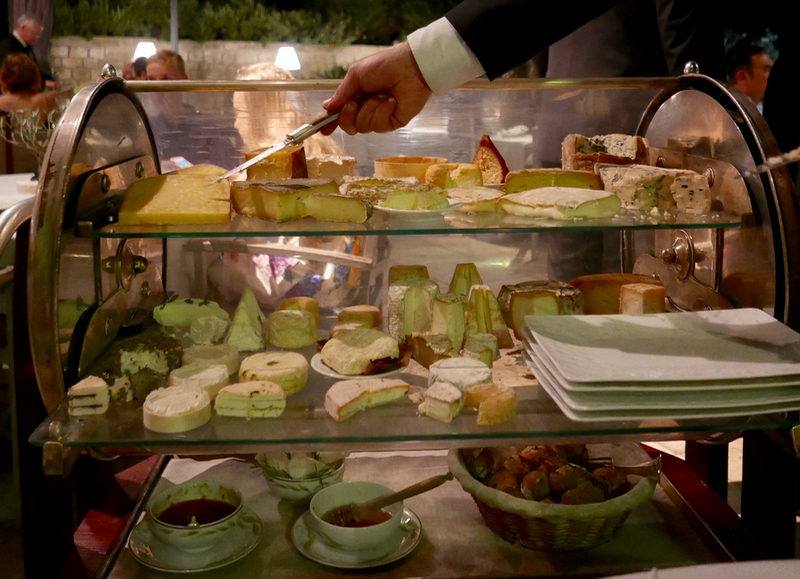 The desserts in the vegetables menu, did not betray its theme. The elegant, tender confit carrot was stuffed with vanilla cream, and served with poached vanilla carrot sauce and a carrot sorbet. Sophisticated, deeply rewarding but not too sugary. The veggie famous Dirt Candy in New York could aspire to this! From the à la carte, the Millefeuille we ordered was traditional but superb. In the signature tasting my husband had a dessert of milk soaked toast with vanilla ice cream, a rustic home recalling delicacy. 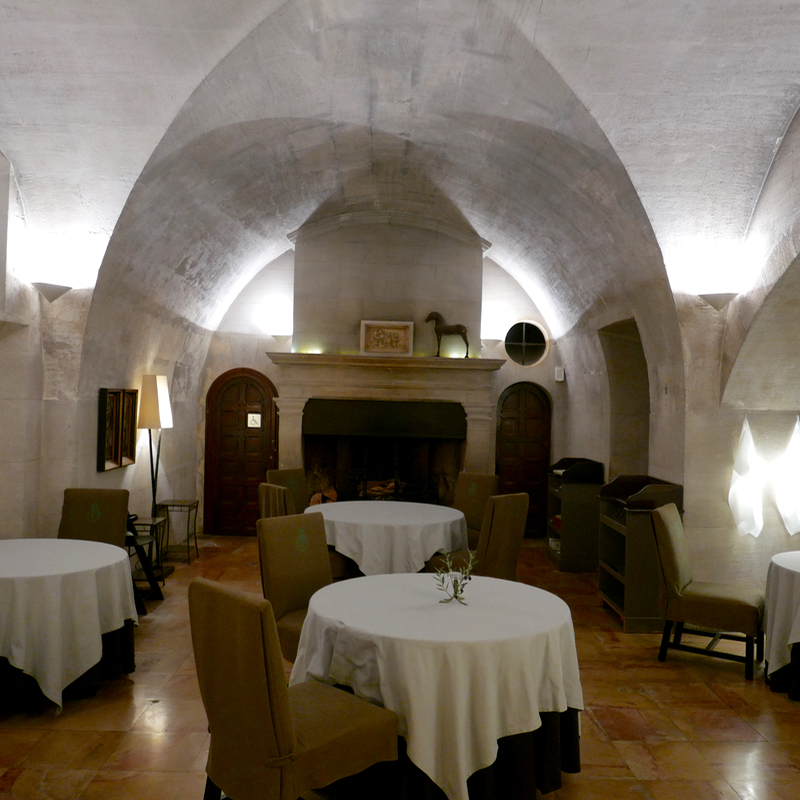 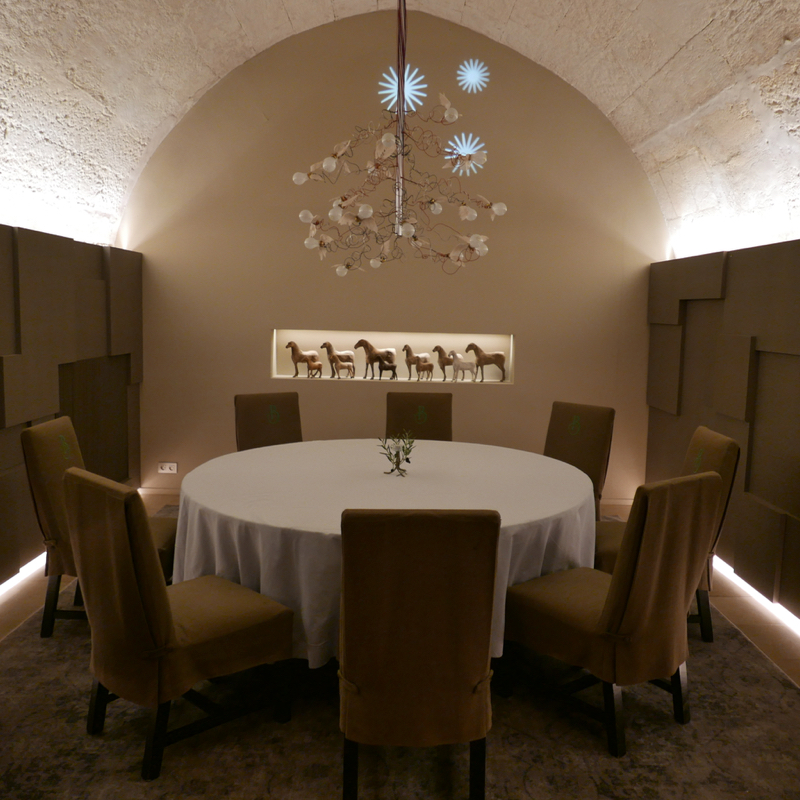 So we could not complain of not having enough, a refreshing bowl of iced mixed garden herbs and lemon infusion Baumanière style with a basil waffle and petit fours – candied jam beetroot, a mini Mont Blanc, basil with jelly and coffee cream tartlette – were served on a giant apple structure. Simply two spotless meals at L’Oustau de Baumanière.

The art filled interior feels cosy so if it gets too cool or the rare rain drops hit the terrace at L’Oustau de Baumanière, enjoy the dining under the arched ceiling. L’Oustau de Baumanière has also branched out to Courchevel. Inside the luxurious Le Strato hotel the winter mood gets further elevated by the impeccable Provençal dining. It was in this mountain resort where Andre Charial met his newest chef Glenn Viel.