The culinary seasoned chef does not need to promote himself if his kitchen team continues serving such comforting, seasonally attuned and perfectly cooked food as we have enjoyed at the Rustic Canyon for years.

Jeremy Fox is one of the leading LA chefs who embraced local sourcing for his flagship restaurant Rustic Canyon. On the menu in Santa Monica and in his well-received recent cookbook On Vegetables Fox gratefully heralds the farms growing his culinary ingredient box. Rustic Canyon mostly sources from Coleman and Waiser Family, Murray, Terry farms (quince), Thao (white yams, jicama) and Windrose Farms, Rancho Gordo (hominy), and other by quality and sustainability driven California breeders and growers.

In the dimmed dining room he does not sell Instagrammable concepts though, just feeds you well.

The culinary seasoned chef does not need to promote himself if his kitchen team continues serving such comforting, seasonally attuned and perfectly cooked food as we have enjoyed at the Rustic Canyon for years. I discussed his fidgety past and the rebound to stardom in my critique of On Vegetables, yet bright days now linger over his culinary talent. Supported by the chef de cuisine Brittany Cassidy, we were consistently served decadent meals inspired by diverse American traditions from Mexico, through Southern, to California, all with a generous pinch of Europe. Calling itself a wine bar is understatement, since Rustic Canyon offers beyond the standard snack food 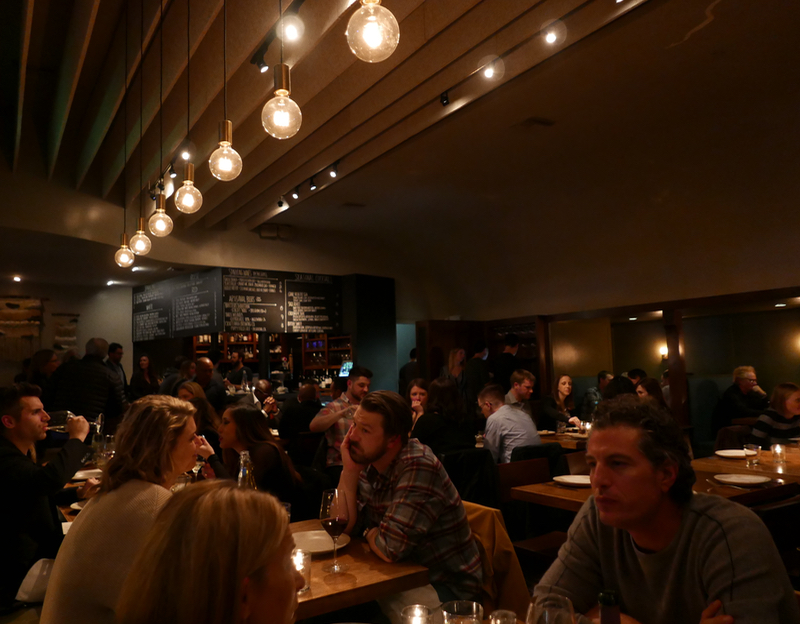 Minutes away from the Pacific ocean washed beach of Santa Monica, the noisy chatter as if echoing the crashing waves fills the dining room. For more comfort ask for a table in one of the booths lining the back wall. The rest of the dining room is exposed to the communal hankering of nightly sounds. If you arrive before the rest of your party, sip on an aperitif in the tiny, usually packed bar behind the hostess. As you drive in, you may get a message recommending a cocktail at the Rustic Canyon, but there are also over two dozen intriguing wines by the glass to start with. Seduced by a white Grenache from California, Spanish white Tempranillo, red indigenous Corsican Niellucciu or a Malbec from Cahors, France, you began to appreciate not having to drive thanks to the convenience of the local riding apps. 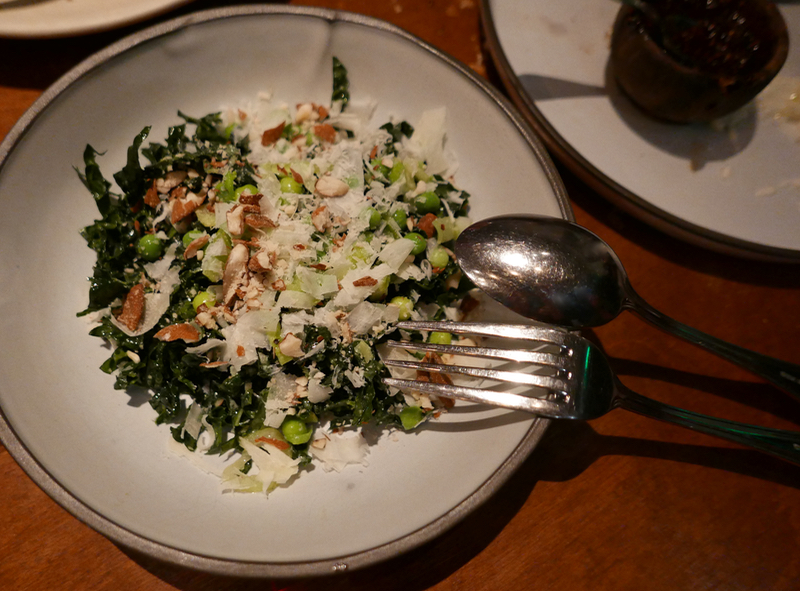 Moving to your table, the signature green olives marinated in orange rind, fennel, and garlic are perfect to nibble on, far better than the Ferran Adria alginates served at the SLS by Jose Andres in LA, and large enough for a whole family sharing. Either, the board of ciabatta baked by the associated Milo & Olive with organic butter or the nose lifting Salted Pretzel bread with whipped cheese, olive oil and mustard jam take their turns, generously warming up the taste buds. According to the contemporary trend, the menu is not divided into the typical three course meal. Encouraging sharing, the groups are summoned around the more simple basics, the veggie focused, the animals and the sweet finale. 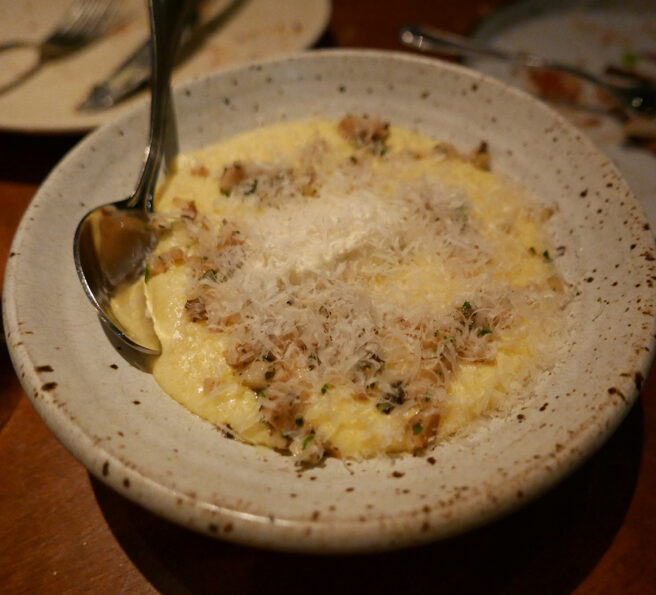 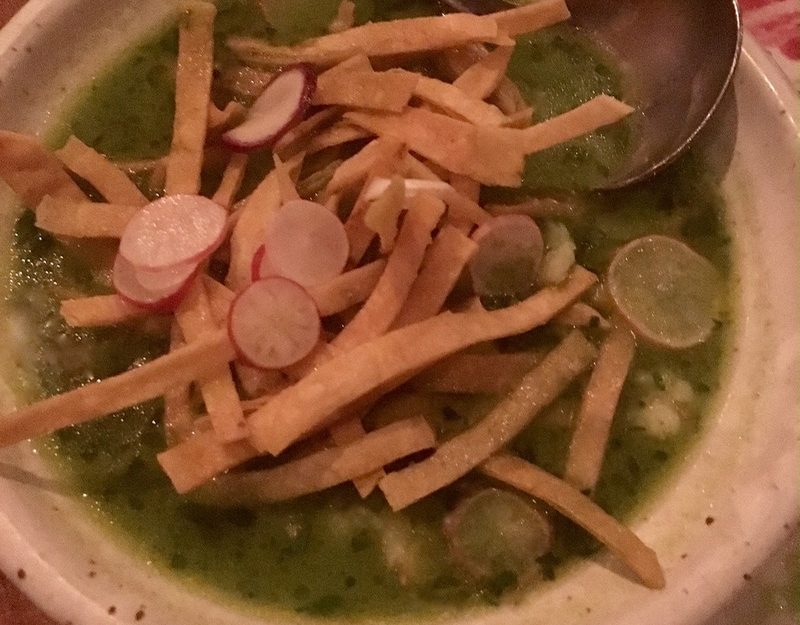 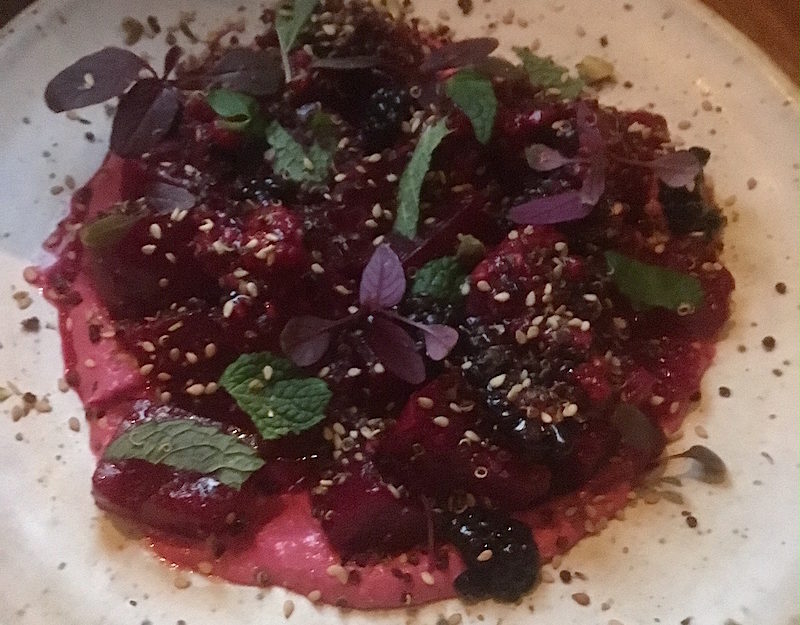 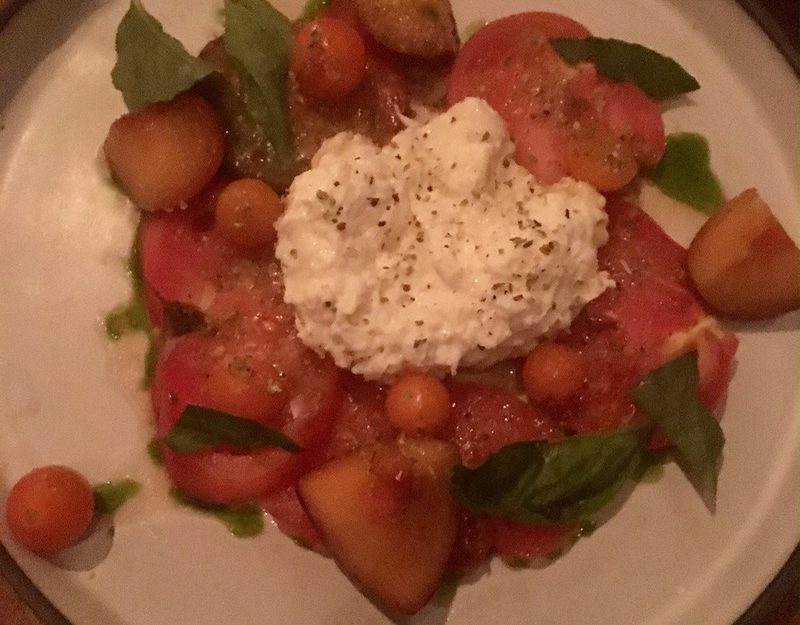 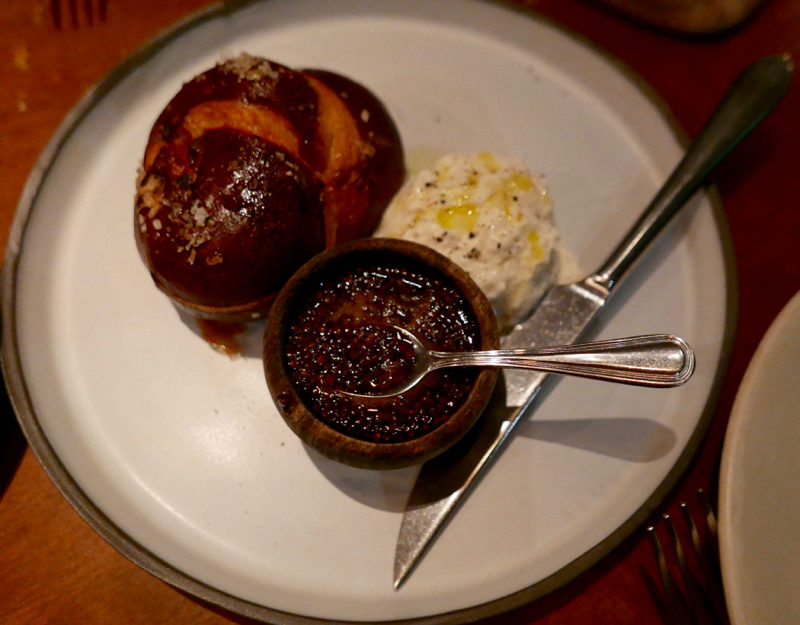 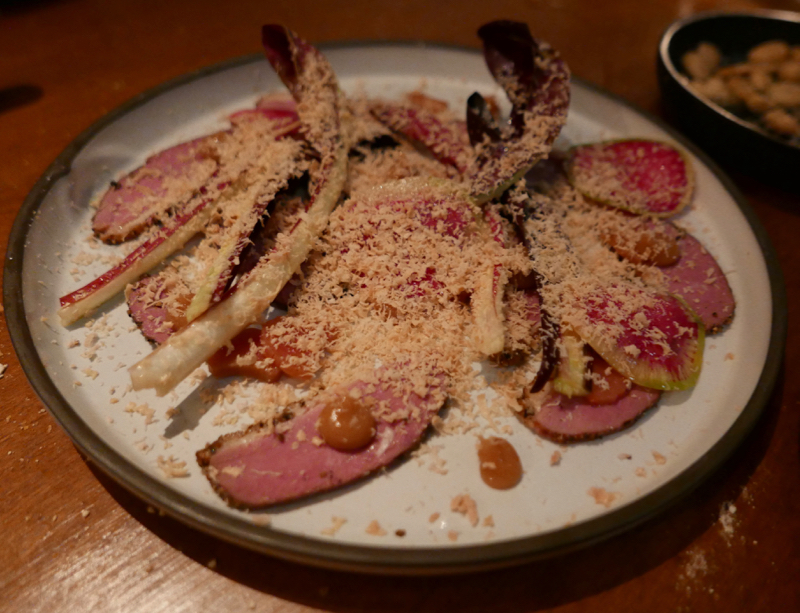 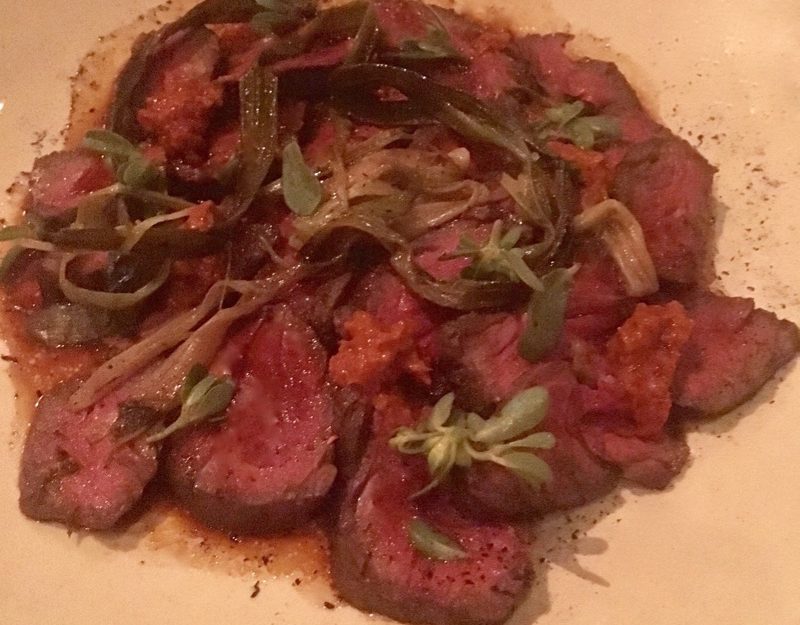 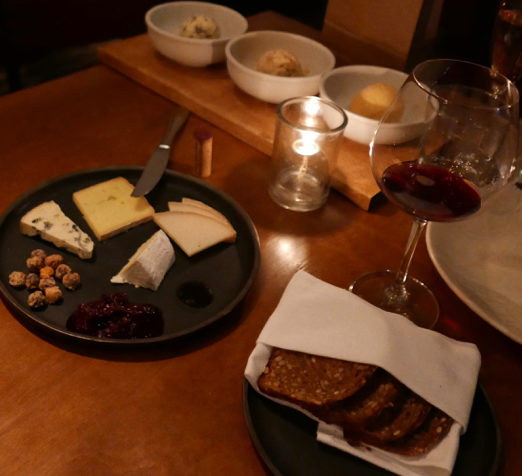 Far from being vegetarian, although in his preface he clarifies that his food open to any responsibly sourced ingredients, the Jeremy Fox’s cookbook On Vegetables can mislead the diners coming to Rustic Canyon for the first time. The animal main plates like the slow roasted Organic chicken, tutti frutti farms delicata squash, spaetzle with crispy sage and the Grass-fed hanger steak with charred calcite onion and almond blended with hazelnut romesco, are still healthier versions of the mass market produced antibiotic, hormone and grain fed meats. They must be shared though for the juicy cuts bathing in the meat’s succulent reduction take over a large plate. Most of my female friends would struggle with finishing them. Some lighter accompaniments should broaden the menu. Cooking most of the recipes featured in On Vegetables revealed to me that, in a produce adoring Mediterranean style his food is far more simple than most of the over-combined California fare.

From the veggie centric plates we ordered most recently, the preserved Beets with quinoa, mint, amaranth, ripe blackberries enveloped in a dense beet hummus dressing and pistachio dukkah spice were a sweet meets sour spot on. Also delectable were the Munak’s tomatoes, with basil sliced under a scoop of burrata cheese gently enhanced with murray’s pluots. The brothy Green pozole, hope ranch mussels, Rancho Gordo hominy, poblano covered in tortilla strips was otherworldly succulent, in fact, the best dish of the night! Slightly disappointing was the Grist & toll polenta, fresh ricotta, terry farms quince and woody herbs (add an egg for extra $3). Even the runny egg did not save the mushy porridge. Baking the polenta would make it better, we all agreed. If there were a competition for the best plate, then the delicate Ricotta dumplings served with Momotaro tomato, caper, olive, parmesan and breadcrumbs would compete for the hedonistic throne. Smoothly melting away on my tongue, the Mediterranean Italian charm overwhelmed my senses, I succumbed to its seductive perfection.

If you have an expansive appetite increasing with each glass of wine as we do, after the meal the artisan cheese plate served with seeded rye crisps by Milo and Olive, sweetly coated hazelnuts and a house preserve fills the cravings. Teasing out the most fragrant dairy bounty of America, the California goats, Vermont cheddar, and other regularly changing US made cheese seal the best of my turf deal. At Rustic Canyon, neither the sweet treats are taken lightly. I relished in the See Canyon jonagold apples, toasted oat crumble and the unusual sunchoke milk, but the creative flair of gelato flavours like earl grey, turkish coffee, honeycomb and the mango citrus sorbet impressed me more.

The wine list prides in the “focus on artisan, hand-crafted producers making excellent wine throughout California, Oregon, Italy, France, Spain and other distinctive regions around the world”. Setting their wine program the number of cases produced is disclosed next to the wine to “show just how special and unique each bottle you’re drinking is”. Some big American names like the opulent Sine Qua Non appeal if your wallet is ready for a splash, but insider labels such as the excellent California Chardonnay by Aubert fuel the wine lovers intellectual desires. Although the offering is extensive, a corkage fee of $25 per bottle (two max per table) is a surprising welcome by a restaurant defining itself as a wine bar. Artisanal beers from Belgium, Germany, Japan, American bottled craft beers and beers on tap widen the socialising outreach. Tea-to-tellers may be seduced by the refreshing house flavoured sodas like Beet & Geranium, Meyer Lemon-Ginger, Passionfruit or Strawberry Shrub.

Owned by a growing restaurant group couple, the husband-and-wife Bryant & Kim Ng, Rustic Canyon is being challenged by their newcomers, but Jeremy Fox has forged his signature style so precisely, that we still crave returning to his kitchen’s comforting embrace. Recently co-working in a local Mexican cantina style project Tallula’s is worth trying for even more off-beat experience. 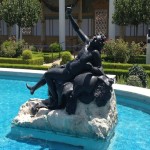 Indulge in Los Angeles at its iconic eateries 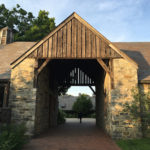 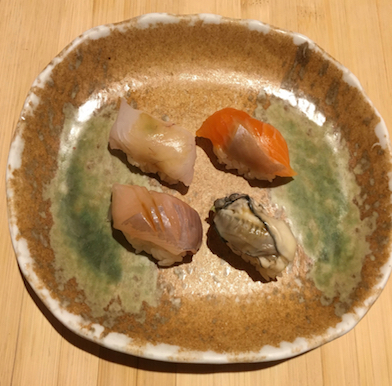 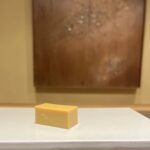