For a luxurious yet authentic Ayurveda in Europe journey to Parkschlösschen in Germany. One of the oldest serious five-star Ayurvedic centres in Europe is set in the discrete solitude of the only thermal spring of the Middle Mosel. Away from the city pollution, its mind-boggling noises, even most of its electro smog, during the diverse Ayurvedic programmes offered here your doshas will leave the resort balanced, ready to face the everyday life. 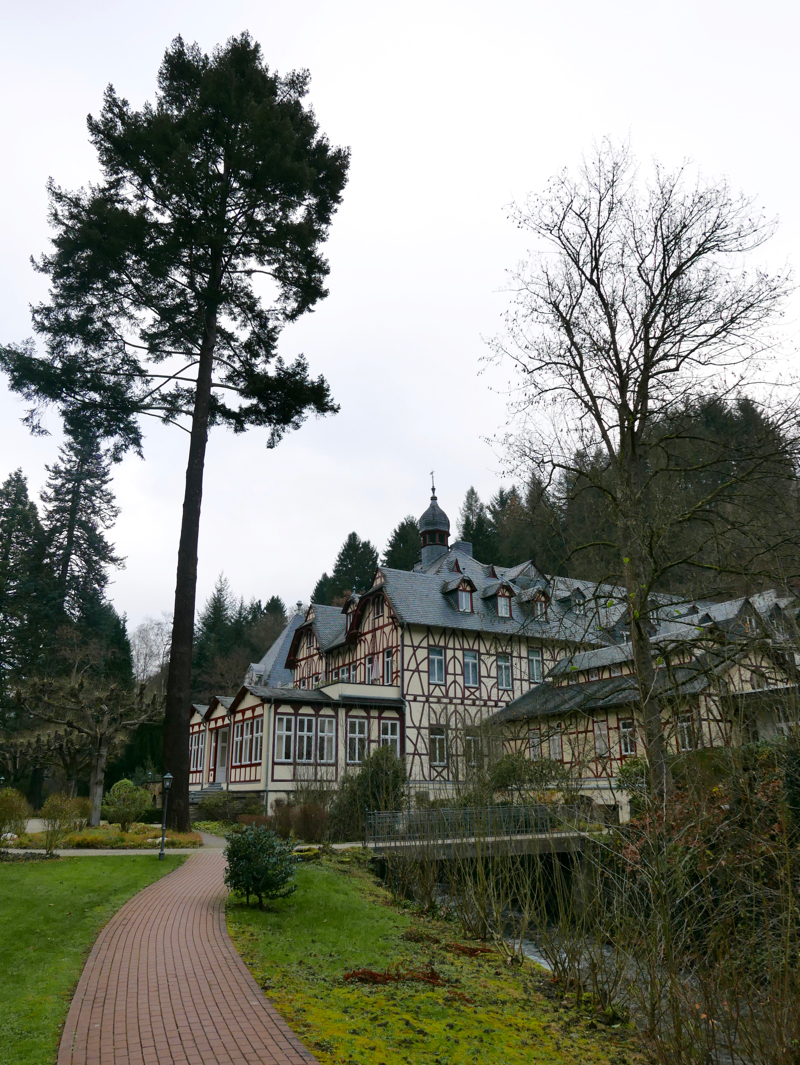 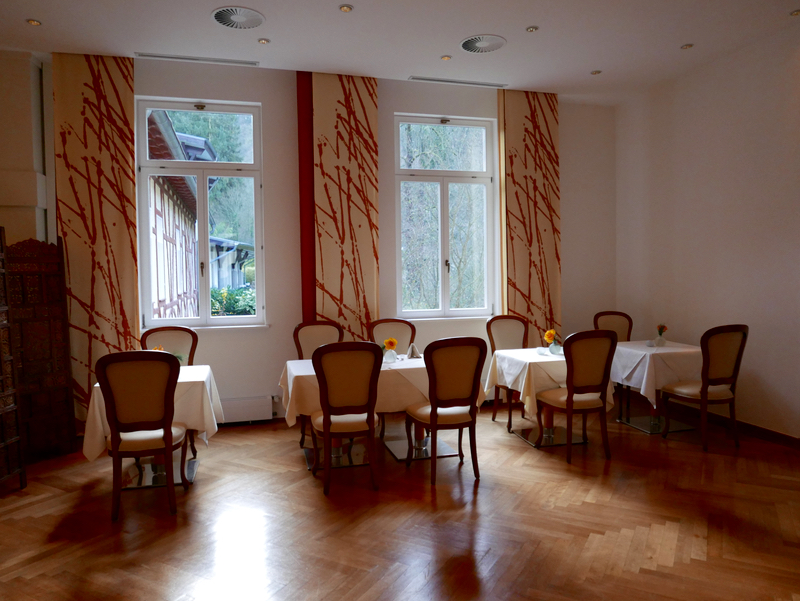 Rest to regain vitality for the year to come

The hideaway historic hotel about two hours drive eastwards from Luxembourg and almost three from Frankfurt in the west, is nested in the valley bellow steep vineyard sites on the outskirts of Traben-Trarbach. Parkschlösschen may seem of place. Bacchanalian indulgence is encouraged by its surrounding, yet you will be soon transformed through the daily meditation and the Ayurvedic treatments so alcohol will not tempt you. At least not during your detox time.
Parkschlösschen offers complete programmes based on the time-proven practices from India. The millennia-old principles of holistic Ayurvedic healing hand-in-hand with regular yoga practice will transform you. A daily guided meditation streamed in the waking hours on the radio channel in your room will set you on the right, mindful path. Throughout the day a classical, Indian music or a vedic channel tune your biological clock to a balanced mood. Sound heals.
Reading is an ideal relaxing filler of the sleepless nights for some hunger pang sensitive individuals, who undergo the hotel’s signature and most intense detox cure, the Panchakarma. There is plenty of enlightening literature available to the guests.
Holistically achieving balance, better focus and feeling physically and psychologically centred (mindfulness) are the goals of this stay. Weight-loss is a side effect, but getting closer to that nirvana feeling is better than any temporary dietary restraint, isn’t it? 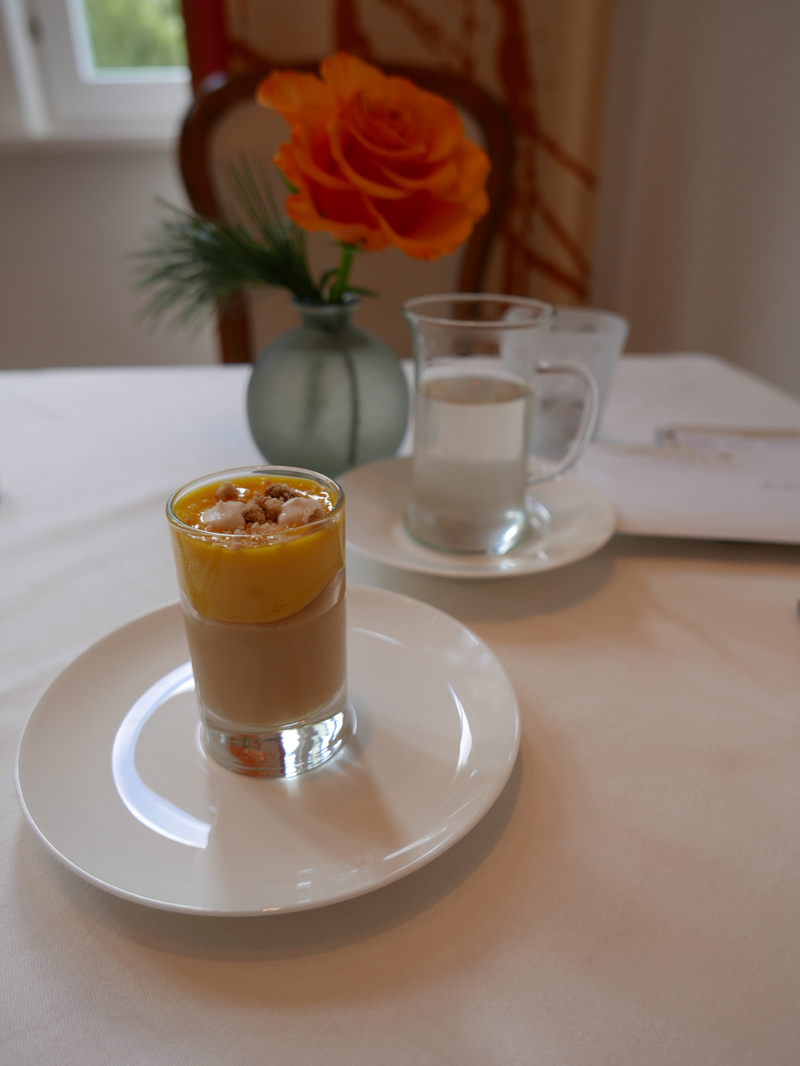 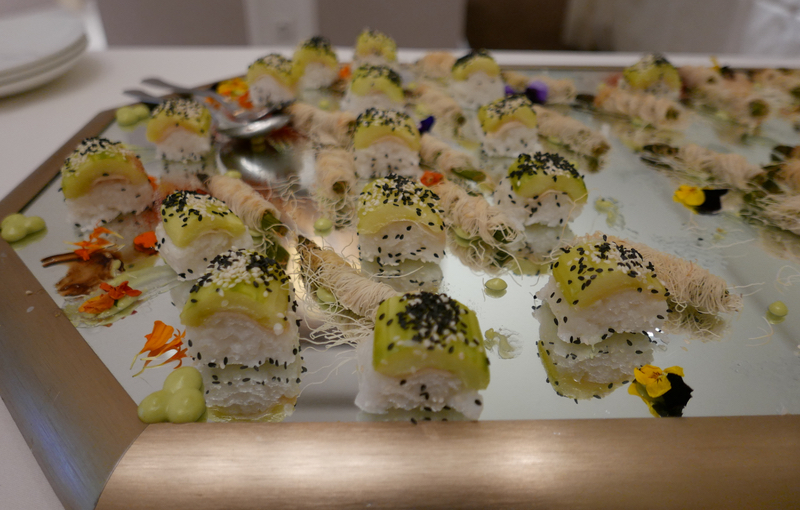 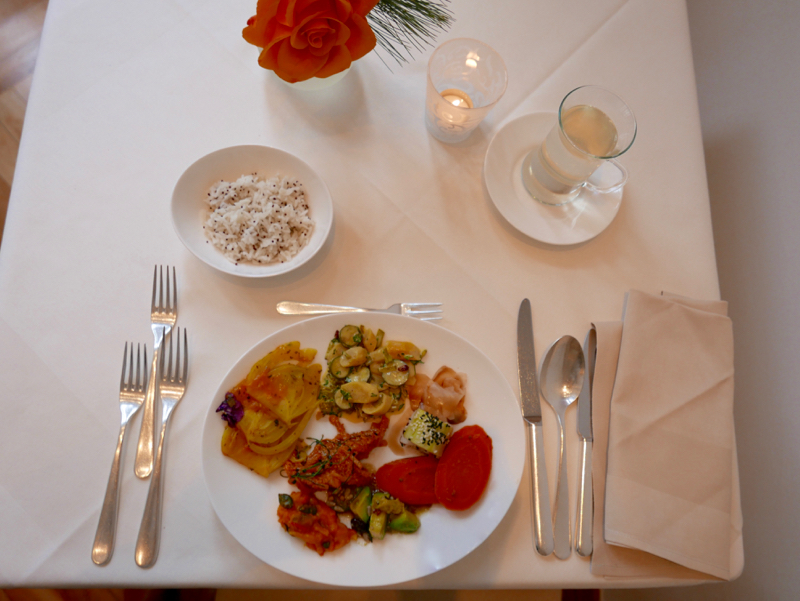 Food is essential to sustaining health in Ayurveda. At Parkschlösschen you will be treated to generous, beautifully presented and mostly vegan (egg- and dairy-free) meals, three times per day. A mid-afternoon soup is available in the dining room for big eaters. The seasonal food, stews, soups and steamed rice do not call for a glass of Riesling, while the warm thermal water and herbal tisanes served freely throughout the day will quench your thirst and desires. Occasionally, a juice or Ayurvedic mocktail (on weekends) is served. The ingredients are mostly organic, caffeine, alcohol, dairy and upon request gluten-free.
Breakfast is simple – warm water porridge from blended cereals, some seeds accompanied with a fruit compote. Digestion is weak after waking up, so the meal should be small according to Ayurveda.
Lunch will be your largest meal at Parkschlösschen and you will start the four course meal with a small dessert, daily! Mindful eating, slow chewing, not drinking when eating and leaving one third of your stomach empty (the last was truly impossible for me) are some of their advices to be followed. Also, the Panchakarma participants, which are the majority of the guests, get supportive herbal supplements served with their meal. Since I only came for a yoga break, I just swallowed some digestion promoting herbs and the digestive cocktail (with ginger) at the beginning of each meal. No sharp spices plump up the food.
A smaller, two course dinner is served from 6pm. The head chef … makes sure that every plate tempts your appetite and it also mostly tasted great. 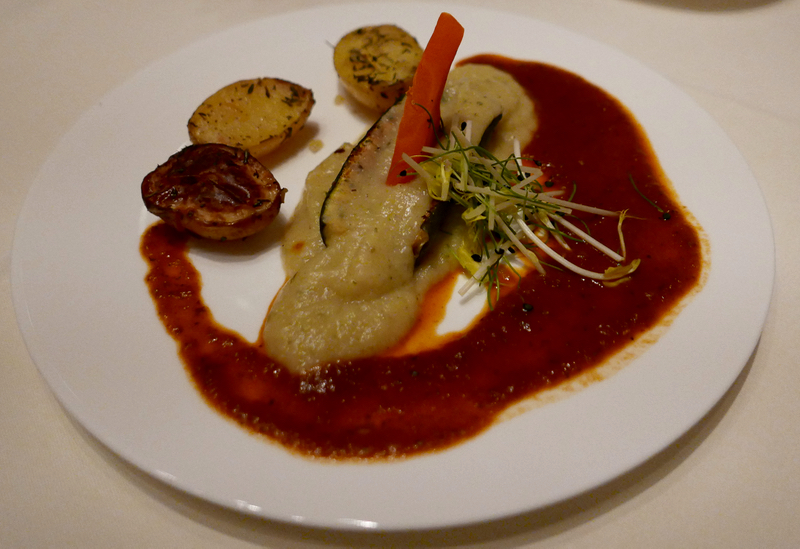 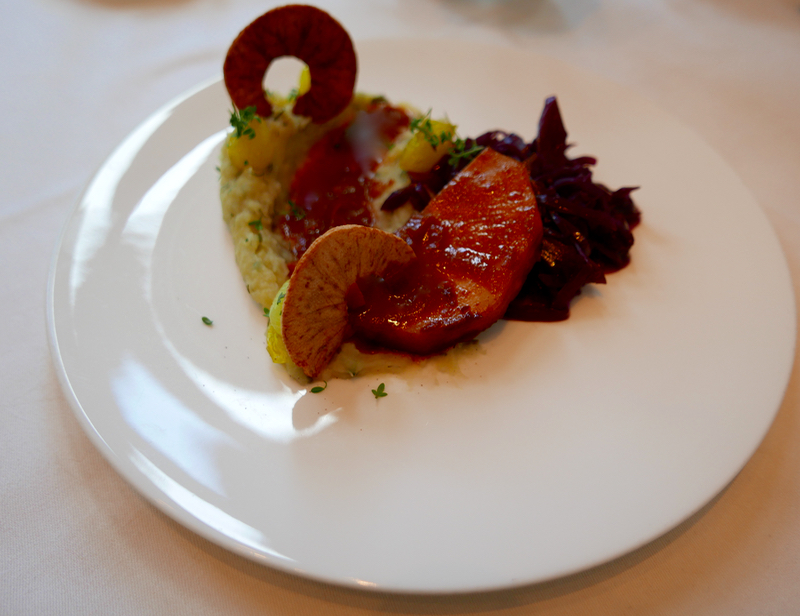 A treat awaits these all you can eat Sunday vegan lunch buffet – think celery and sesame sushi (not as good as it looks), fruit tarts (brown sugar is allowed for indulgence), grilled vegetables and curries (all superb), and of course the omnipresent white rice with fenugreek seeds. Those on “ghee days” during their Panchakarma cure are warned what not to eat.
Get inspired for delicious vegetarian and mostly vegan recipes by the Everyday Ayurveda Cookbook I tested in my home kitchen. 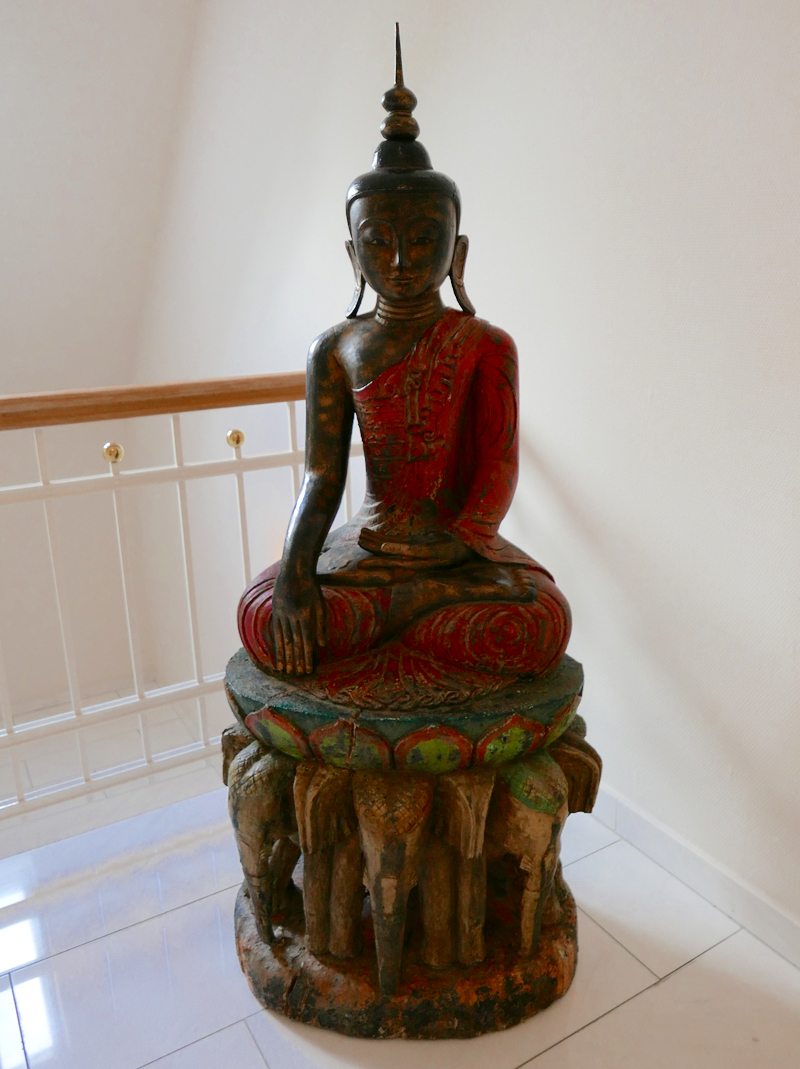 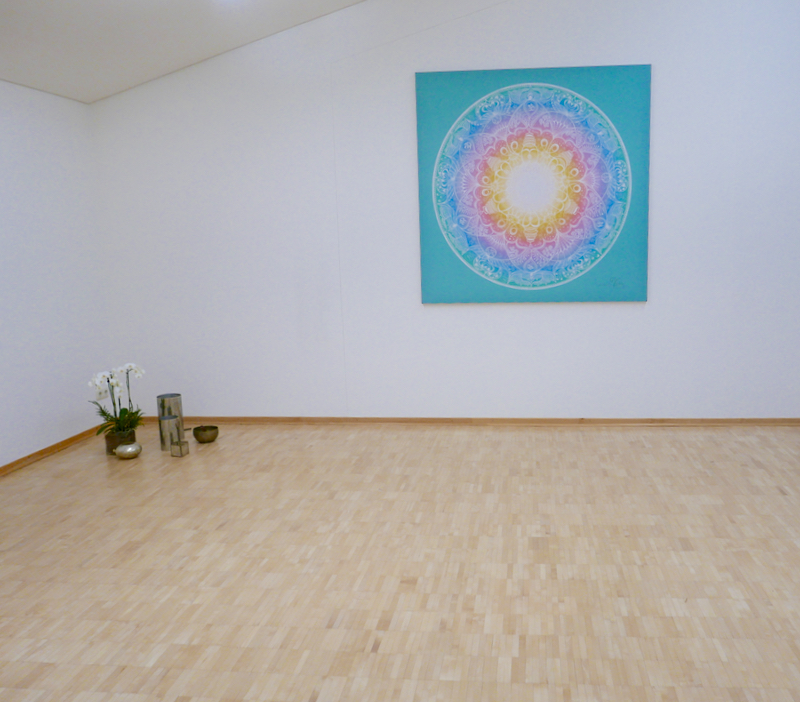 Feel as being cared for and loved at Parkschlösschen

The team at Parkschlösschen tries very hard to make your stay wonderful. Not just adhering to the Buddhist principles of wise communication (non-harming, useful, authentic and truthful talk), but through daily lectures (mostly in German, some in English) with psychologists, doctors, Ayurvedic experts, you will enlighten your approach to happy, healthy and purposeful life.
The retreat attracts health-seeking Germans of all-ages – from athletes and their model girlfriends, TV personalities, lonely 30-somethings to old couples that have been coming to do their Panchakarma detox for decades. Like at Buchinger Wilhelmi, serious French ladies join the Swiss and German health-seekers.
A candle-lit dinner (you can sit alone or with others, your choice) , fresh flowers on your table, the bar lined with freely available warm herbal infusions – Pita, Vata, Vata balancing but also pure ginger, cardamom, and other agni supporting herbs and spices. Just serve yourself throughout the day.  The lounge area is spacious and welcoming. 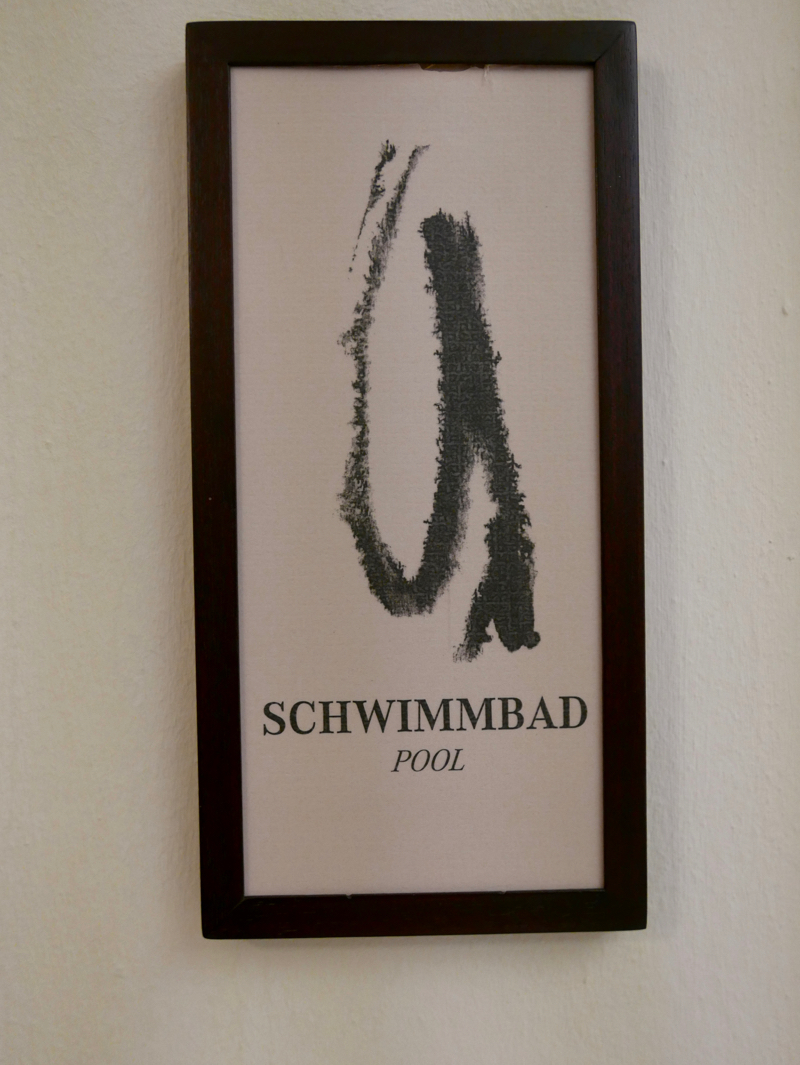 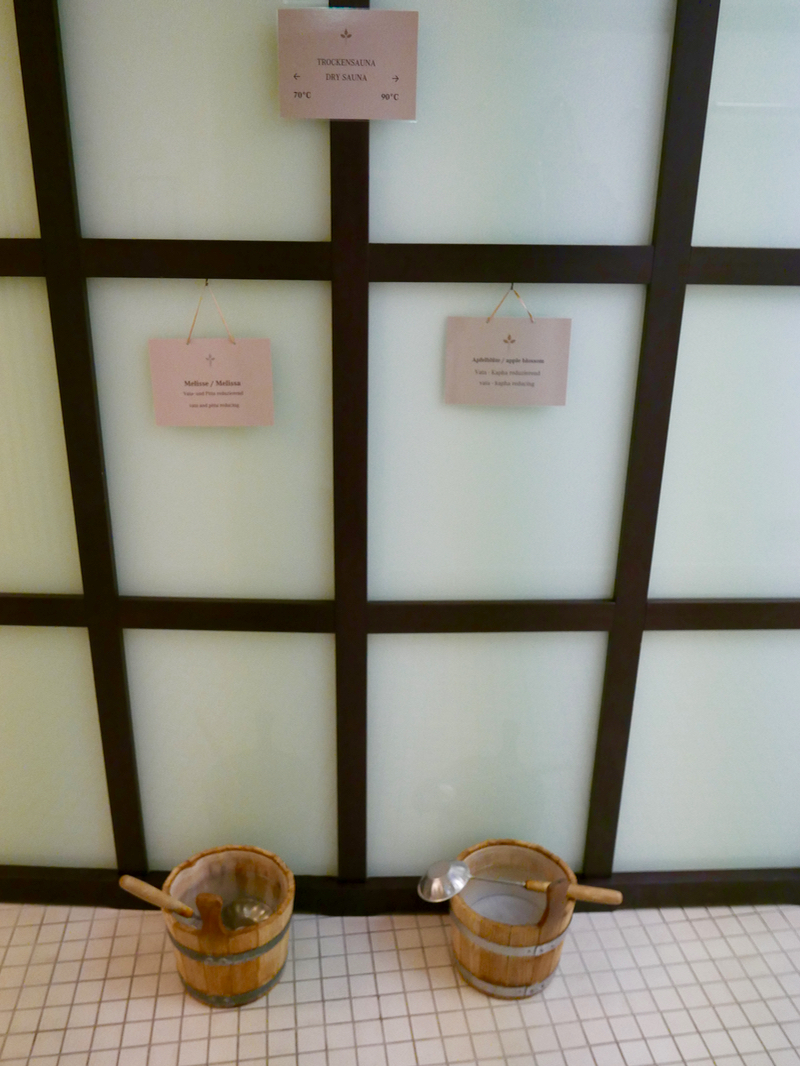 Nourishing your all aspects of being

For more than twenty-five years, the historic bell tower (the oldest, central, part of the hotel was built in 1901) spiked building undercut by a vigorous river stream, has been in hands of the same German family. Wolfgang Preuss refreshed the ageing building to the Ayurveda hotel after being healed through its principles. Every member of the team at the hotel lives according to the Ayurvedic lifestyle, and this infecting you with an authentic integrity. After traveling in India, learning meditation and yoga, his daughter Carina became more involved, now as the managing director and overseeing the yoga department. A 2000 m² “Veda-Therme” wellness centre was attached in 2002 converted from the existing municipal thermal spa. Stretch in the warm pool, two saunas, two yoga rooms and there is a fitness studio large enough for a complete workout, if you have the energy. A beauty salon completes the holistic pampering.
Daily German and English press, talks, restorative yoga classes, once per week a cooking lesson (learn how to cook Ayurvedic food right for you) and tour of the small Buddha Museum (the Preuss family owns it, only if at least five participants sign in, mine was cancelled) are included in your stay. Upon request some teachers speak English or you can pay for private classes. Anyway, the true yoga was transmitted from a guru to the novice. One of the expert teachers, Raja Ray, from India is also a neurologist who wrote a book on Parkinsons and yoga healing. I enjoyed my insightful classes with him the most. 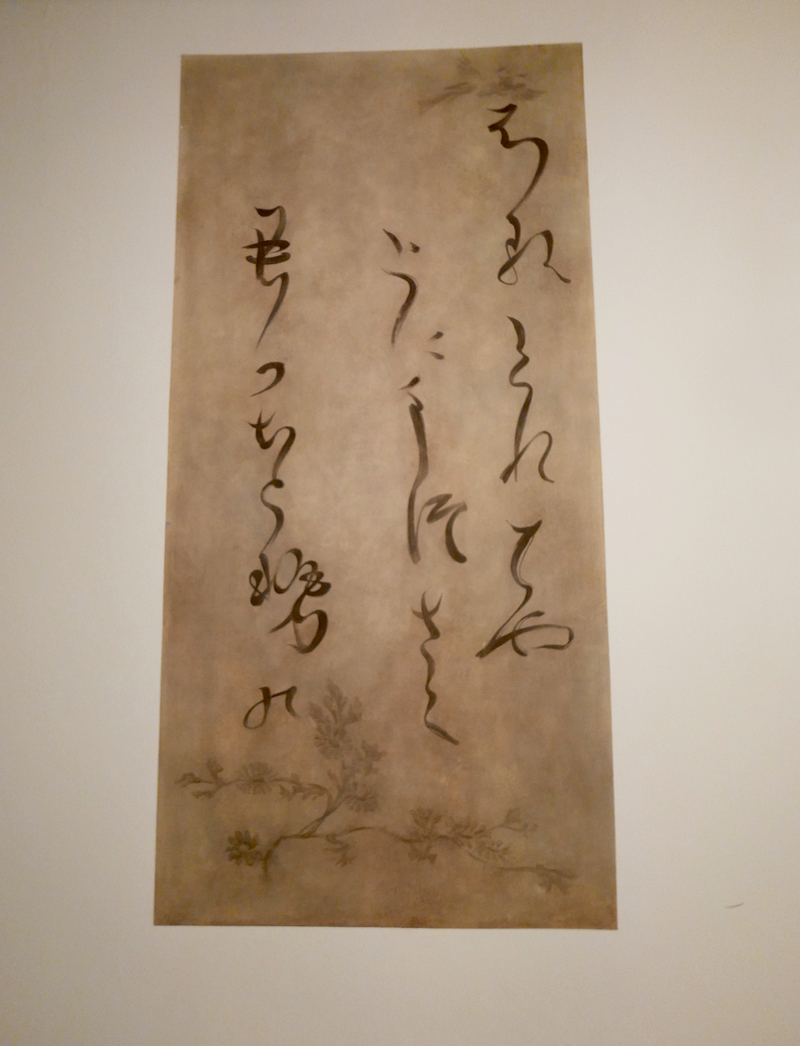 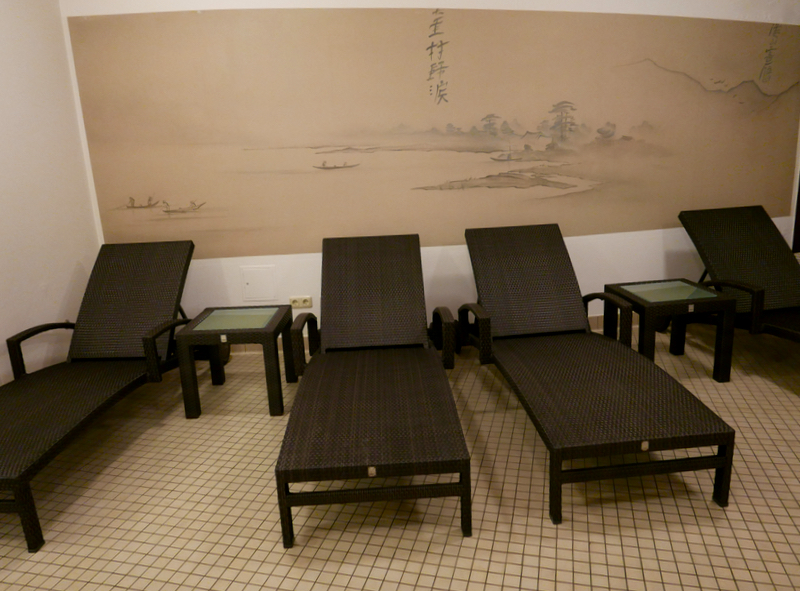 Rules during your “cure”

You are not allowed to use your mobile phone in the common areas, tech-detox is strongly recommended at Parkschlösschen. Even your online yoga will be replaced by a mindful presence since there is no wifi. A cable for internet can be installed in your room. Since many guests were requesting it, television has recently made it into the guest rooms. Smoking is discouraged, but there is a smoking room on the premises. No candles and incenses are allowed in the rooms for safety reasons.
Strenuous exercise is not recommended during any form of intense detox. The empty plunge pool next to the saunas reminds you that cold water is not recommended by Ayurveda under any circumstances.
Daily printouts handed out at dinner inform about your next day treatments. In room “sleep well” printouts highlight daily yoga classes (8am dynamic & 5pm gentle), tours, cooking classes (once per week), recipes such as “sleep milk” for the night owls, film evenings (screened in the common TV room), and the upcoming lectures. 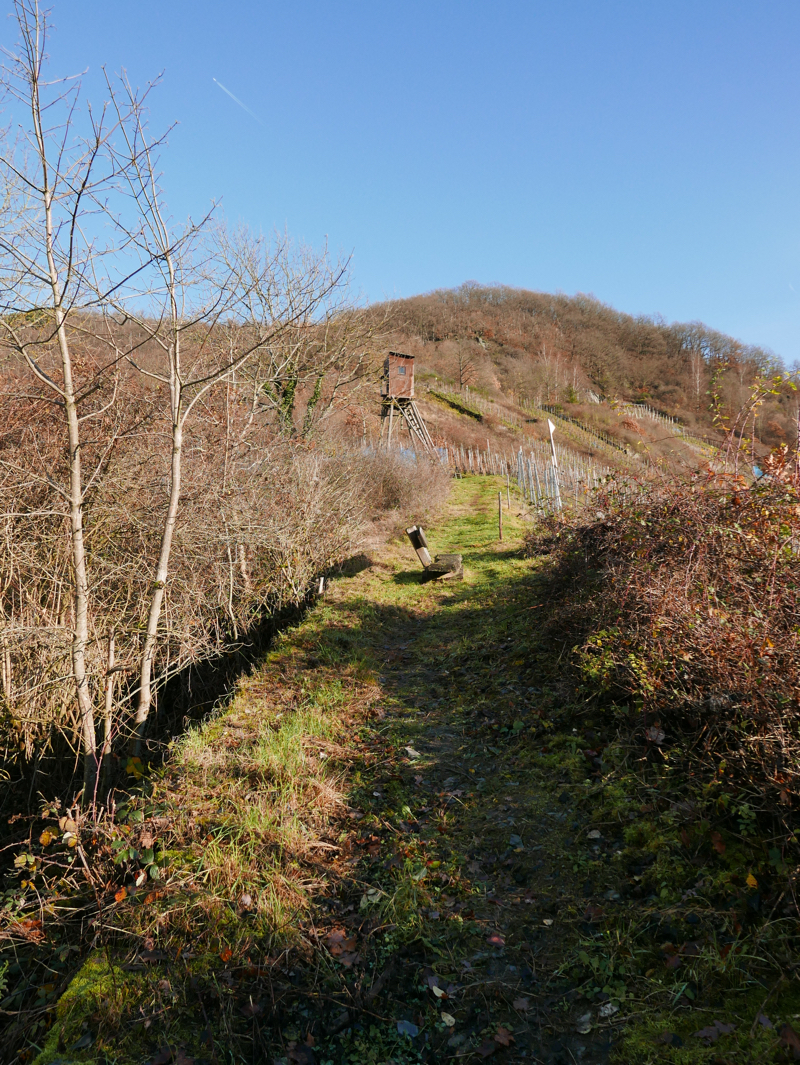 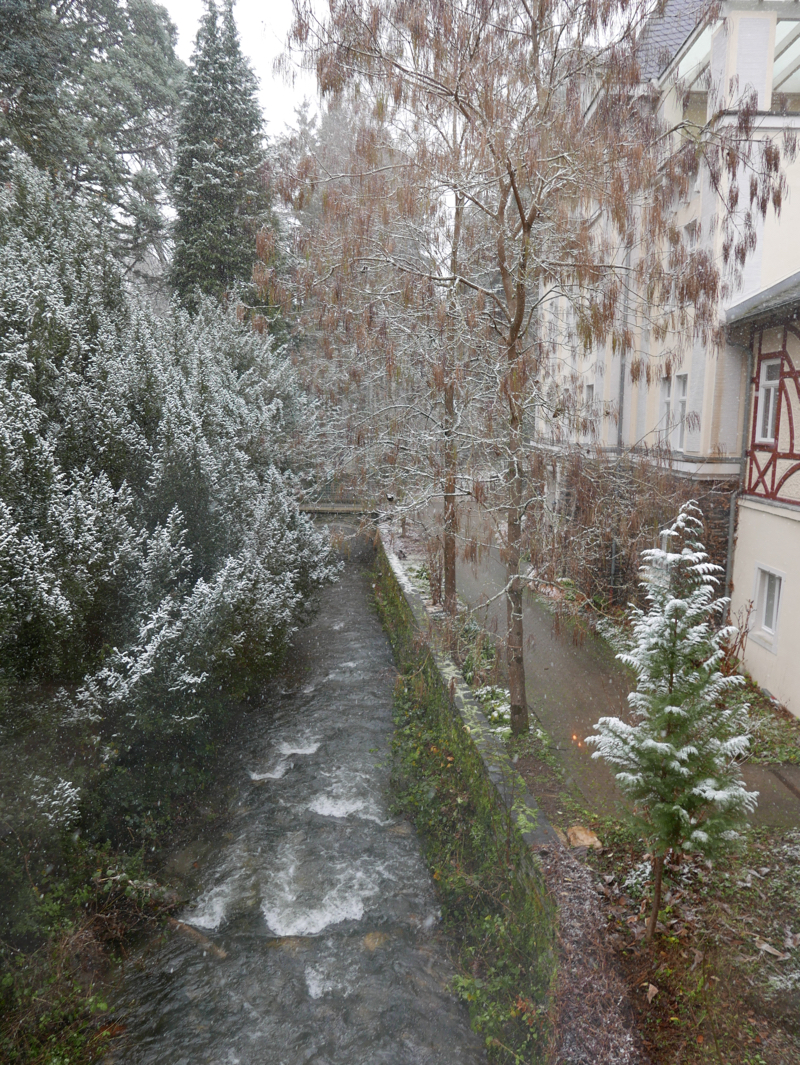 Rent one of the hotel’s bikes or hike when the weather allows (one day I could hike up to the vineyards tinted with autumn ochres, while the next morning I saw snow falling on the natural scenery). There are well signed trails, from easy rolling walks through the forest to steep hikes to the terraced vineyards just above Parkschlösschen. Pack well-gripping boots. A cultural walk along the town’s villas built, like much of Parkschlösschen, by Berlin Jugendstil architect Bruno Möhring, is charming, and many of the buildings are more than 400 years old.
The extensive underground treatment area will pamper or clean you inside out (scrubs, udvartana, enemas, colonics, …). According to the Ayurveda tradition for a maximum comfort and relaxation, women are treated by women and men are touched by the hand of men only during the treatments. A four-hands synchronised oil massage (abhyanga) made me felt like a queen, the pichu (warm chickpea flour cake) put on my belly afterwards centred my mind, padabhyanga the next day enveloped my feet in oil, kalari or marma-nadi-massage balanced the chakras, while vishesh released my muscletesnion after three days of intense yoga practice. I was not new to the Ayurvedic treatments since I did it all during a week-long retreat in Maldives. The Cinques Mondes spas offer also some modified Ayurvedic treatments around France. 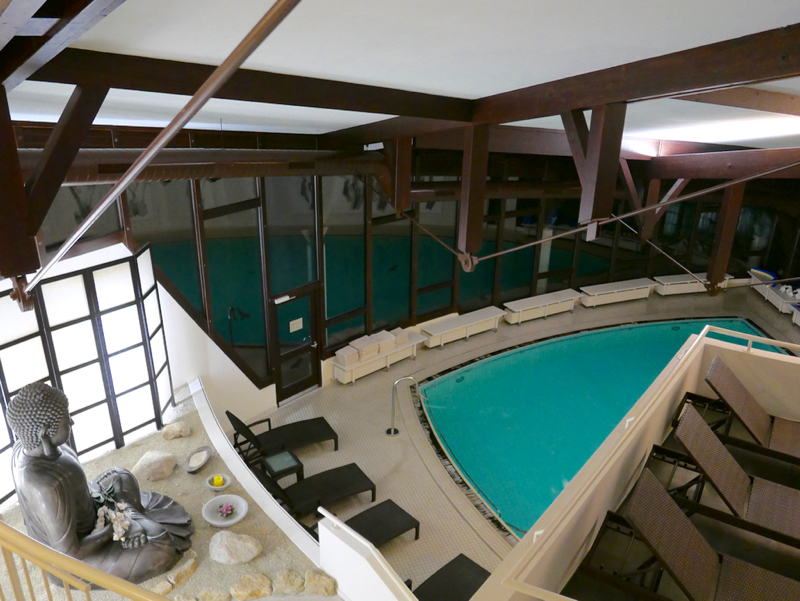 The 10-day and longer lasting Panchakarma cleanse includes sipping on a melted ghee (believed to pull our impurities from your organs), daily enemas and an occasional colonic irrigation, dosha-specific vegan diet (except for the ghee) with certain irritating ingredients left out, and a range of oil treatments prescribed by the on-site Ayurvedic doctor (some also trained in Western medicine). You will see the expert at the beginning, mid-way and at the end of the cleanse to track your progress and emotional state of being. Read more in my Ayurveda post.
Unless you booked the best lunch table in one of the nearby Mosel towns as I did (I did not participate in the panchakarma so I was allowed to), you will not have an excuse to over-indulge right after your departure from Parkschlösschen since an Ayurveda cuisine to go, a diabetic-friendly lunch in a jar, warm kitchari Bento box or soup can be packed for your convenience. Unwrap Ayurveda on the plane or in the car! A much better food than the roadside or in-the-air offerings! From now, keep Ayurveda in your daily life.