The plate is like a dress made to measure since the stark plating is not the drive, the food idea comes first. Return, and you will watch and taste his whims of creativity.

The culinary scene in Milan was stirred about three years ago by Tokuyoshi’s Italy meets Japan innovative cooking. The wisely-stridden Japanese chef Yoji Tokuyoshi opened his first solo restaurant fittingly in the most international Italian city. His formative culinary youth at the three-stared Osteria Francescana in Modena do not shy away, yet he also authentically imprints his Nippon soul, life experiences and even his wife into the Italian ingredients enhanced by his sensitive Japanese touch. This is Cucina contaminata. 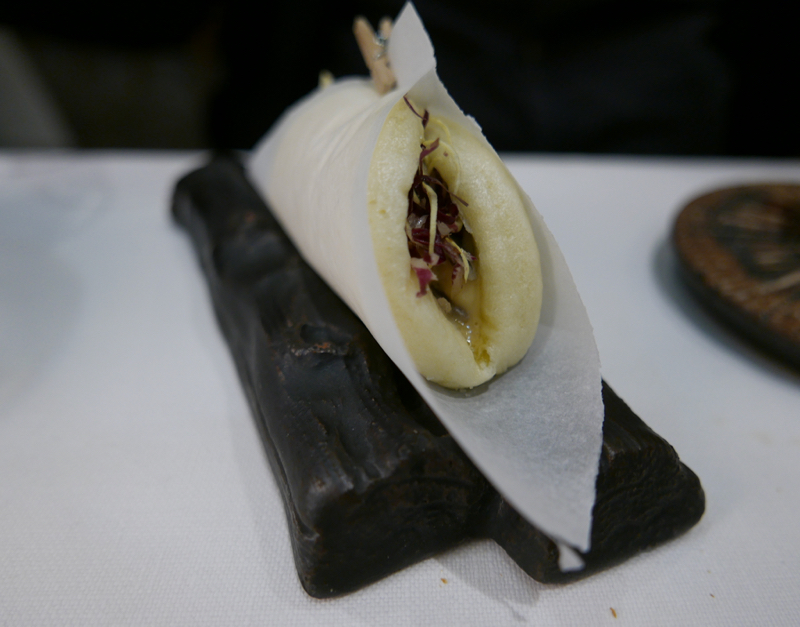 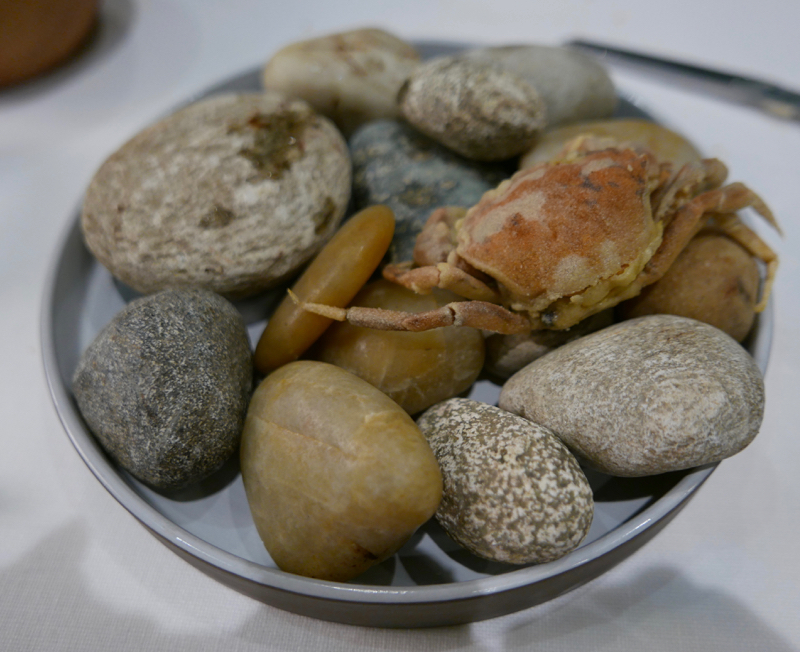 Re-tasting his culinary experiments with a poise for its entire life-span, I concluded that like at Francescana here taste is superior to fancy and soulless renditions of traditional food. The presentation is creative, even artsy in Tokuyoshi’s mentor Massimo Bottura strokes. Since he worked at his three star Osteria as a sous-chef, the plating’s origins remain an unresolved conundrum. Always with a pencil snuck behind his ear, the young Yoji is set to jot any sudden flow of ideas down. The plate is like a dress made to measure since the stark plating is not the drive, the food idea comes first. Return, and you will watch and taste his whims of creativity. In an interview for the Art of Plating he confessed:  “I try to fully experience each action, giving full attention to the gesture and the moment. This state of mind, I believe, is the best breeding ground for a new concept.” A man of integrity, the chef has visited the grounds of the farms he sources from to assure that they adhered to responsible stewardship of the land. The broths he pairs with each course were conceived not just to add flavour but also to win over your focus, to slow you down and to enjoy the meal mindfully. This slow preparation also means that our lunch was more precise than the dinners at Tokuyoshi.
In the back of the emerald dining room a green sprout, an art piece by Marcantonio Raimondi Malerba, is the Tokuyoshi logo representative of “a new beginning, a new adventure ready to grow”. 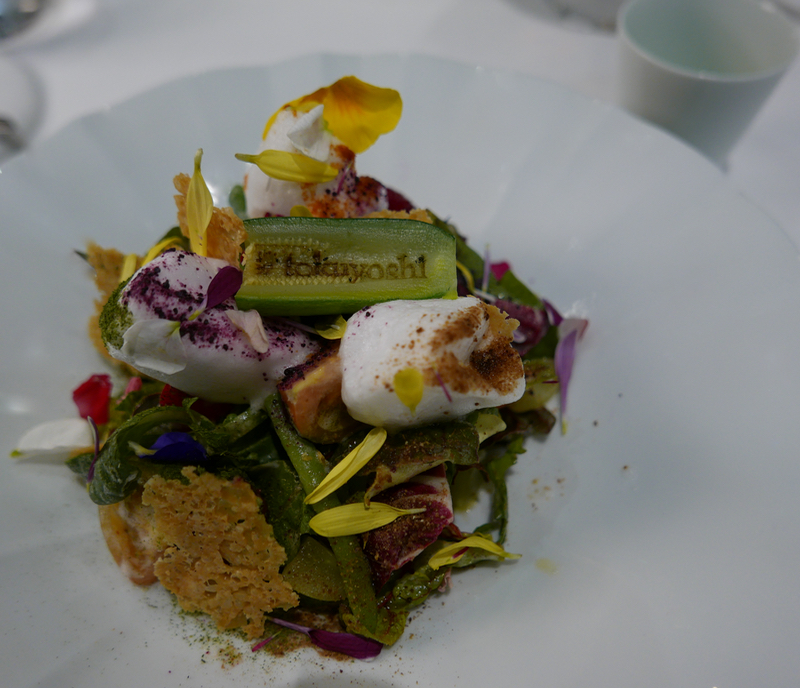 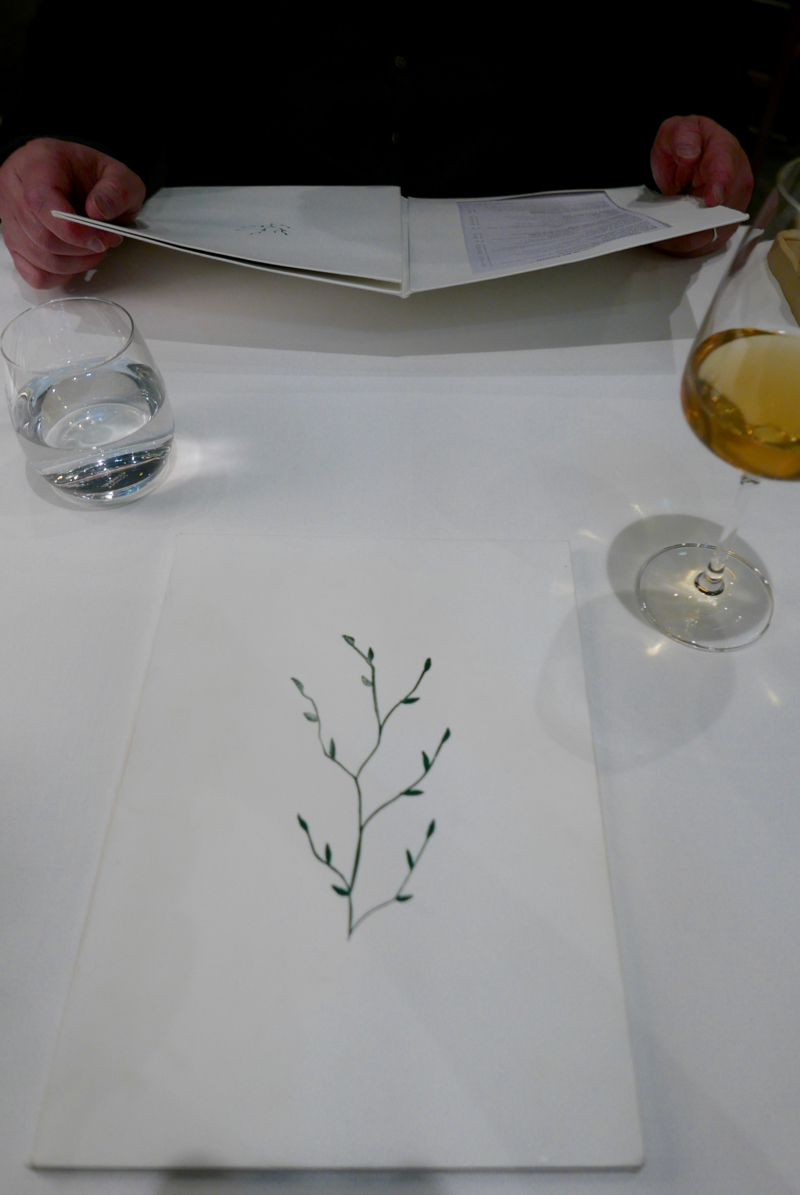 Tokuyoshi is a seasoned chef, who participated on Cook it Raw chefs’ gathering in the Ishikawa province together with Rene Redzepi, Alex Atala, Daniel Patterson, Mauro Colagreco and other worldly chefs. Exchanging ideas with the best in the profession has surely impacted him, but he is inspired more by the ingredients he has on hand. In his restaurant, off-the-menu specialities can flush out an impeccable soft-shell crab, deep fried to a crunchy claw to tail perfection. We double ordered this treat.
Welcomed by a bun-round loaf with butter sets you in the Northern territory of Lombardy, while the small nibbles with an aperitif have readied our taste buds for more gourmandise. A broth from all of the vegetable leftovers, delectable food waste reducer, warms you up for the meal ahead. The unique broths are paired with almost every dish.
The Foamy Salad #tokuyoshi was inspired by the chef’s Italian wife, and used to be served with wooden thongs before the foamy dollop of cheese was added recently. Flower petals, pickled cucumber, seasonal greens and a side pea green broth with it. Starters like this are larger than Tokuyoshi’s “snacks” which can mostly be eaten in two or three bites. The signature Bread, Butter and Anchovies steamed as a bao stuffed with an anchovy dice and sprouts is not my favourite dish but a must try once, while in the charcoal-coated shrimp tempura, simply spit on a rosemary branch is an excellent aperitif snack. 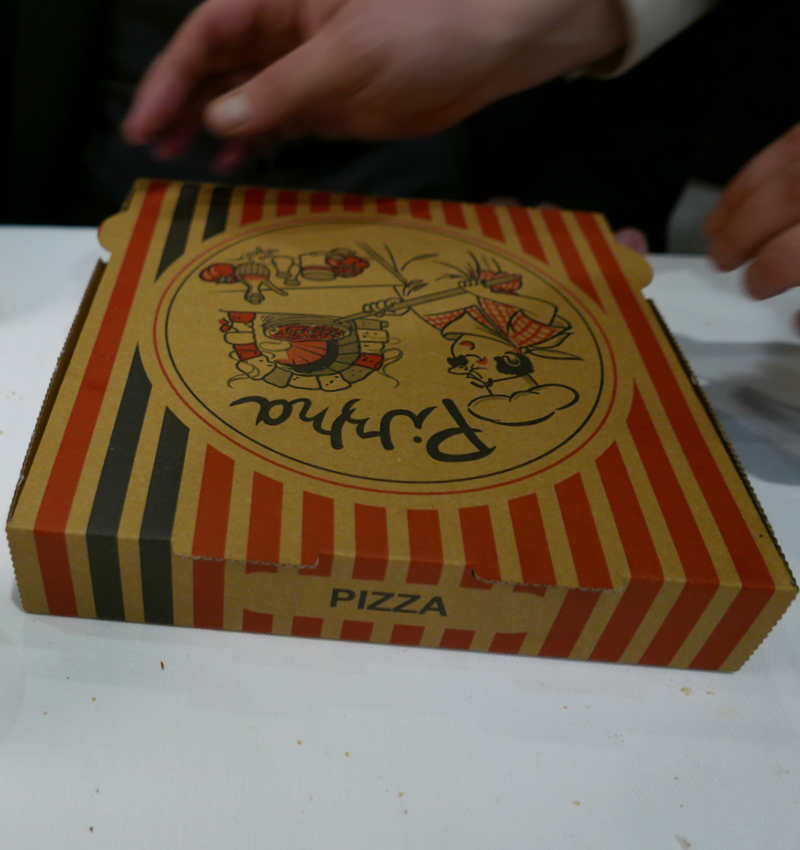 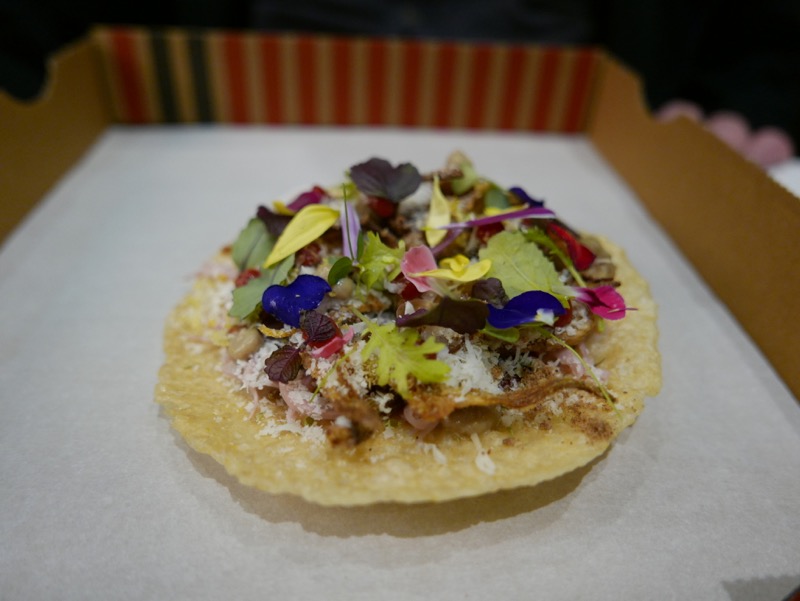 The “Grandma Lucia’s Tart cannot rival the best on the Italian markets: Aubergine, tomato, parmesan, all was inside the pastry; the challenge is to outdo someone baking the one damn thing daily for most of her life.
In Liquid Pizza “alla Marinara” enjoyed with a spoon, the flavours were totally there, naturally gluten-free since the doughy part was omitted. I am not in the juicing tribe, but I liked the liquified pizza idea. There is also an ultra-thin crust pizza rendering that might disappoint though. Being served in a proper pizza box, you open it and stare at the tiny cracker topped with fresh petals, minimal shavings of cheese, worse even – the olive green broth served along does not patch the freshly slit wound. Now I really craved the real pizza. To our relief, following the Italian fashion, the menu offers pasta, the real thing, or a rice course. I was genuinely impressed by the Tribute to Noto Spaghetti with almond milk, clams, and pistachios, a very Sicilian flare. Poured over the light pasta dish is Frappato grappa scented with capers by an excellent Sicilian wine producer Arianna Occhipinti. Never mind, my husband was more smitten by the Tagliatelle with Wagyu Ragout, the fatty Japanese beef melted in decadently. Better than the typical thing, but I bet the Italians will not say to their nonnas, but I can. 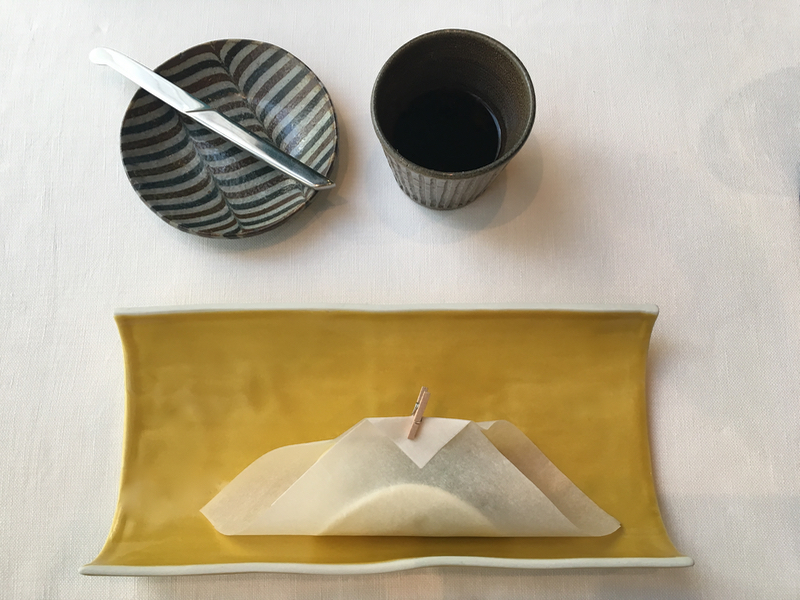 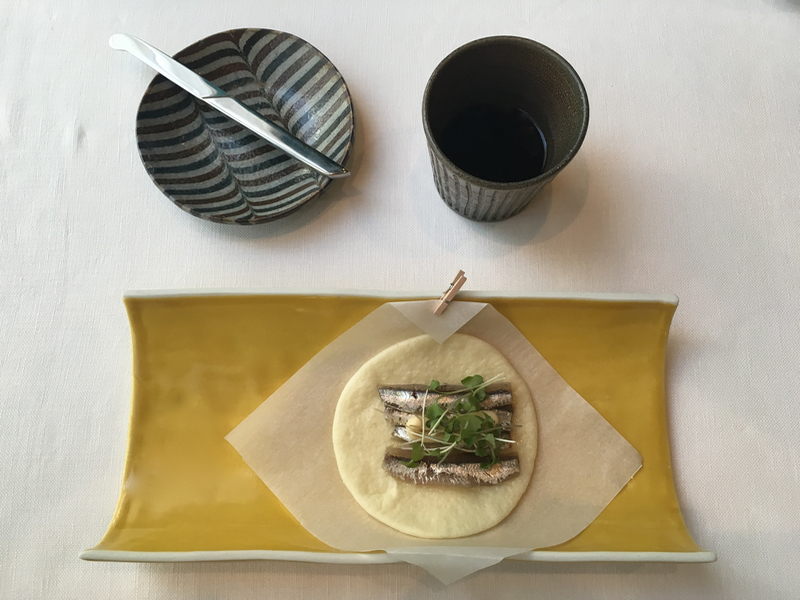 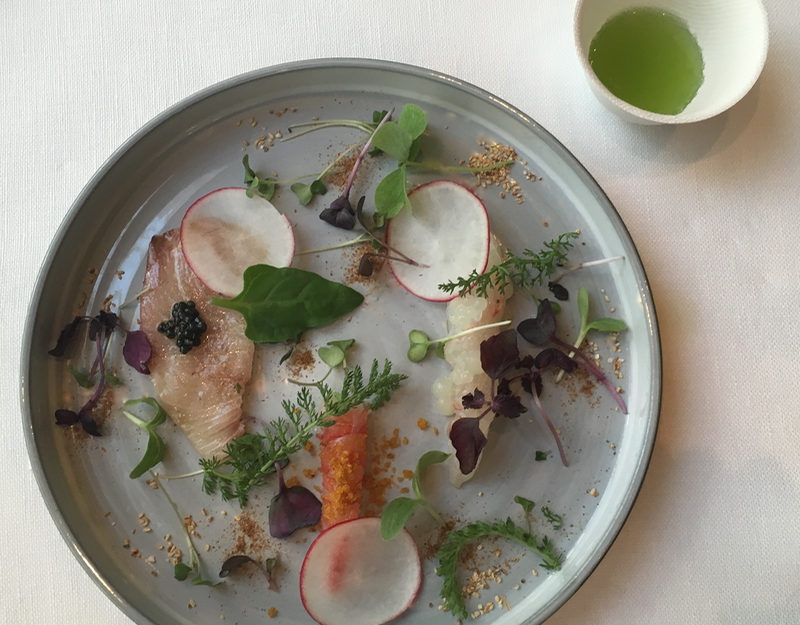 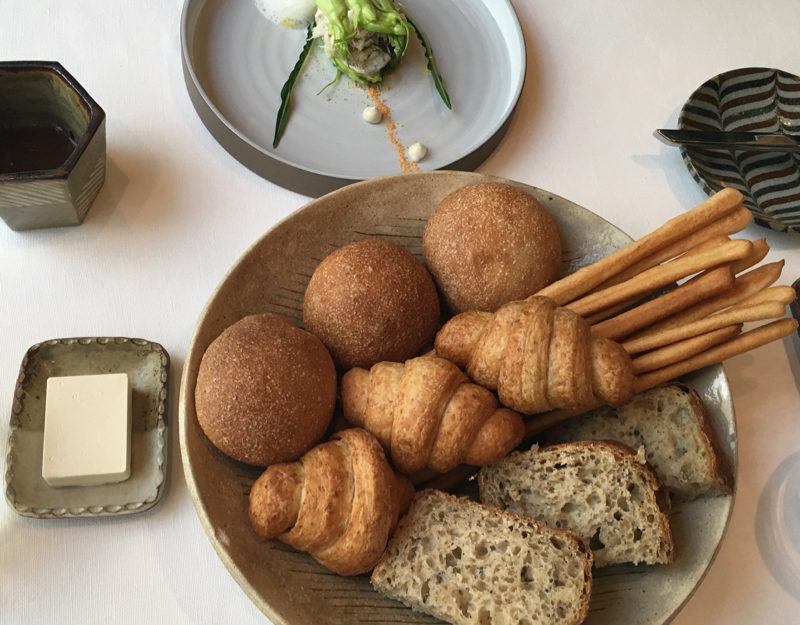 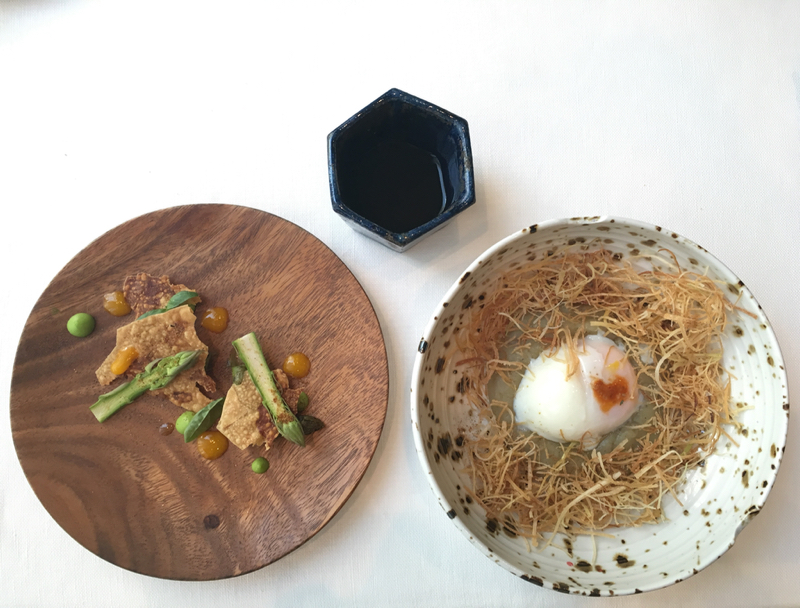 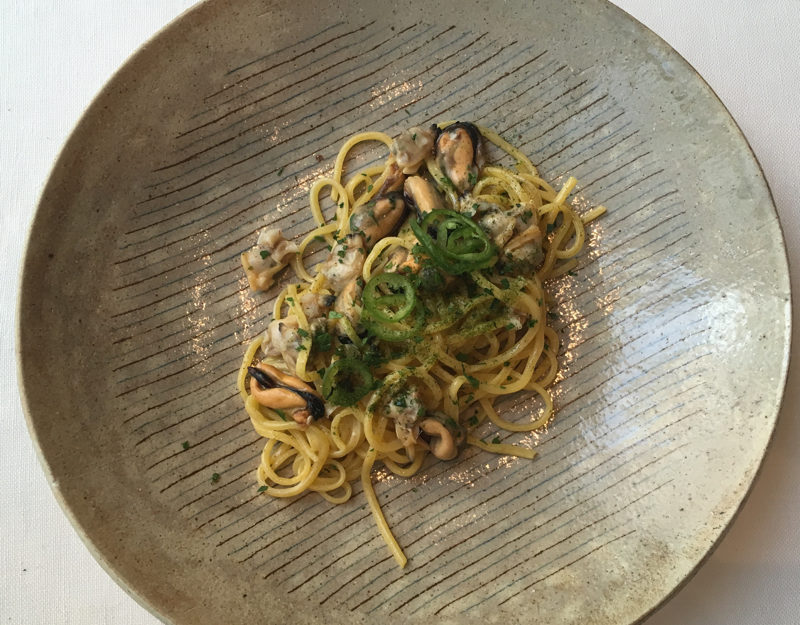 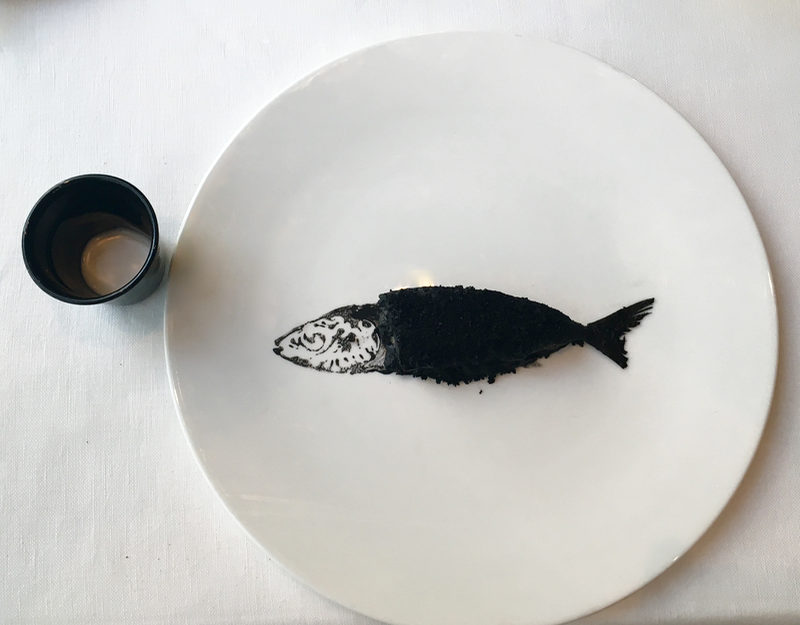 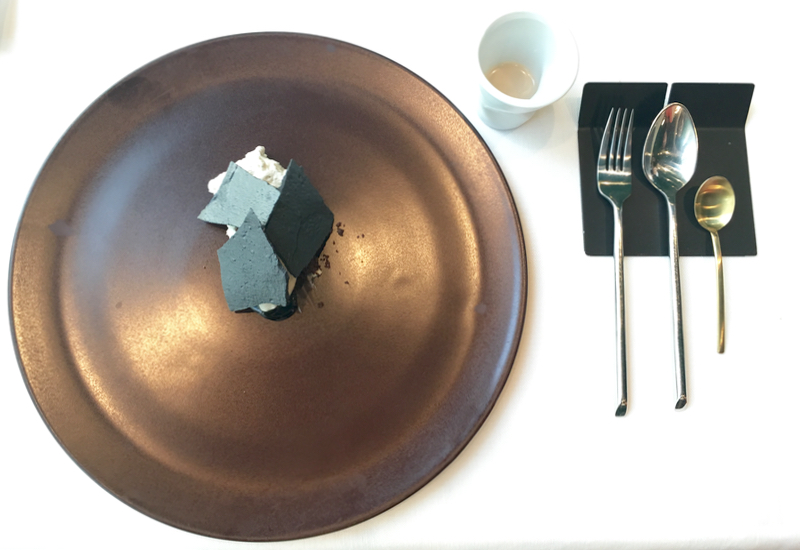 0
Thanks to the custom made plates by “Project Arita for Tokuyoshi”, the Gyotaku Mackerel was reformed into an edible sculpture with ash. Gyotaku is an ancient Japanese painting technique transforming a real fish into a canvas. To memorise eating this fish, the chef imprinted it on the serving plate. It was deliciously simple. My last main course at Tokuyoshi was less successful though. The Scrapetta of mixed daily catch was overpainted with intensely hued sauces (mussels & nettles; broccoli & anchovies; shrimps & squid ink; bell pepper & lemon; tomatoes with clams & oregano) and served with a side of double-decker toasts. This hodge-podge was so confusing that I had no idea what the artist meant by that. My palate was overwhelmed.
The signature fat-bursting Suckling Pig in the Forest comes from the semi-wild raised “Cinta Senese” breed butchered by Macelleria Zivieri Massimo, a Slow Food member committed to high standards of animal welfare and traditional, artificial additives-free production and organic farming practices. Still, my husband was not fooled and did not enjoy this plate. 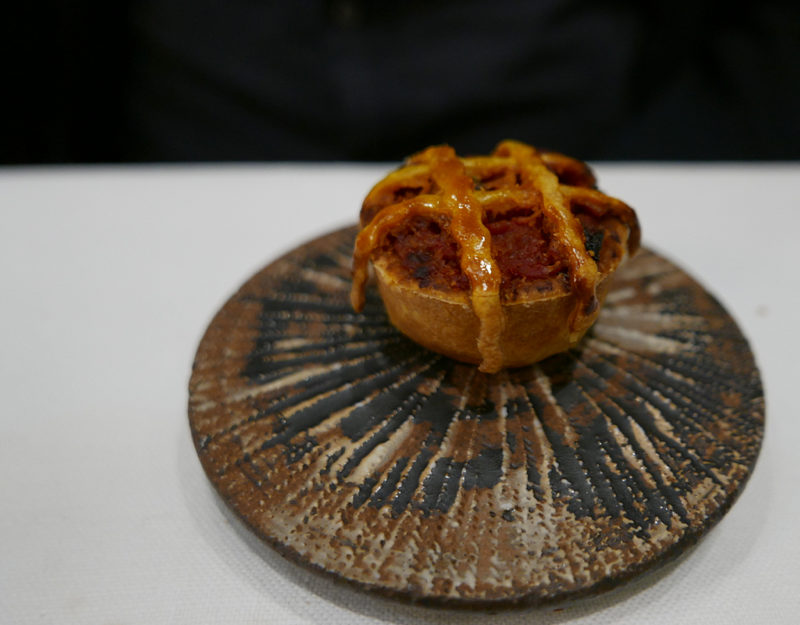 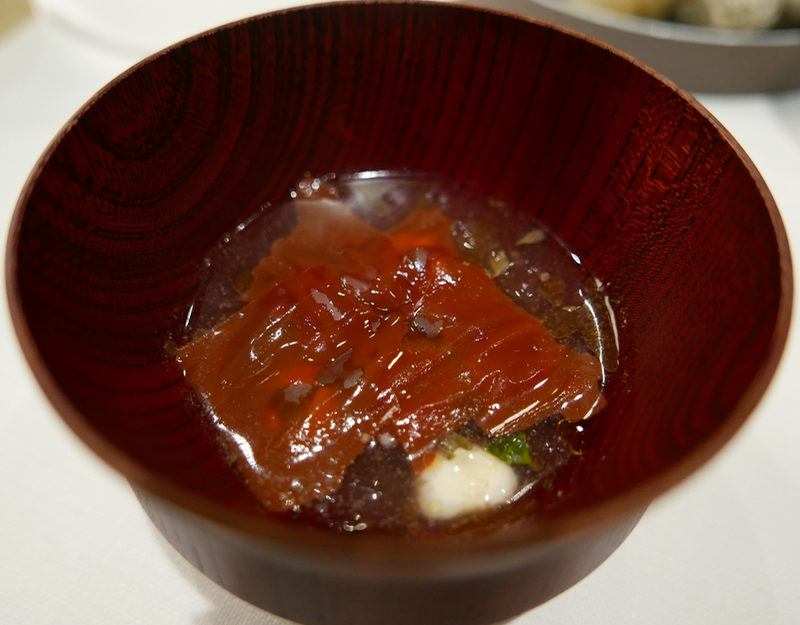 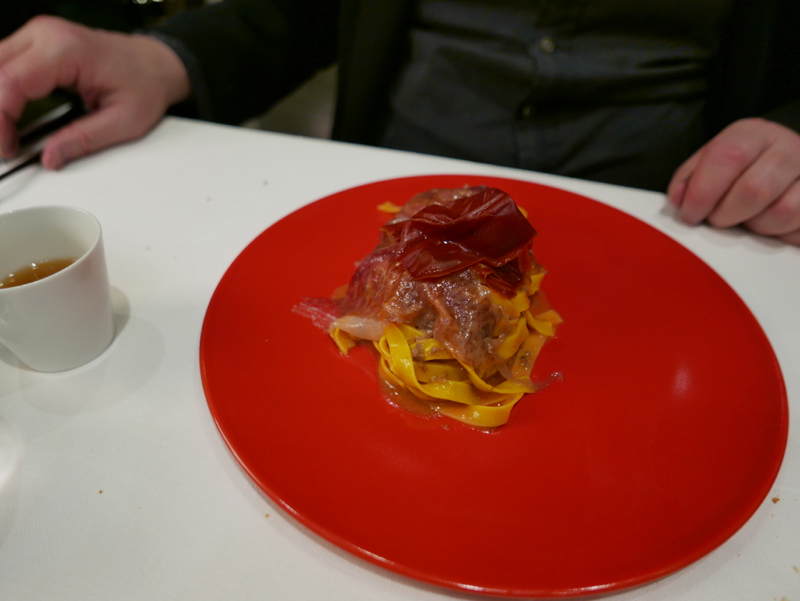 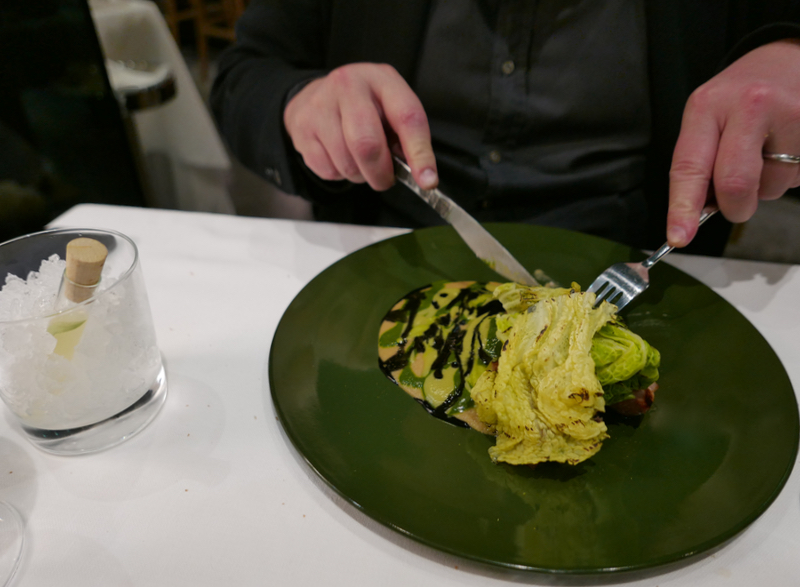 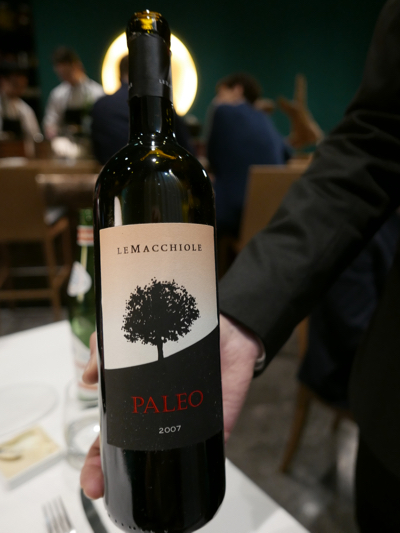 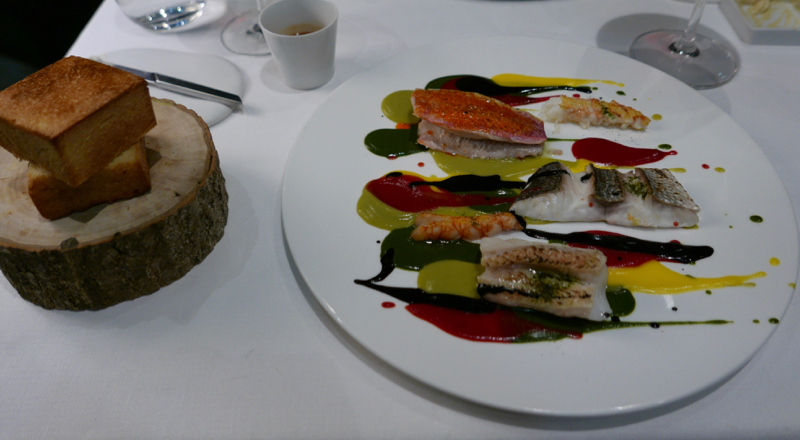 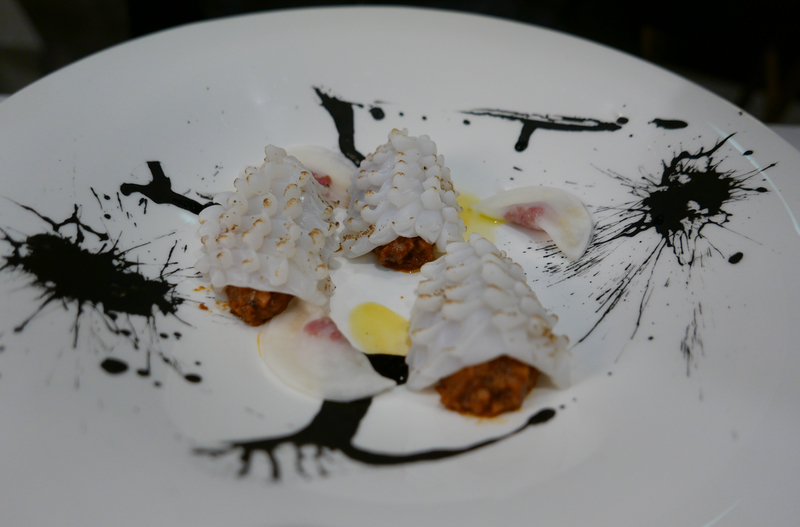 0
There are two tasting menus for dinner at Tokuyoshi. Italy meets Japan showcases his “cucina contaminata“, but there is also an “omakase” tasting akin to the chef’s table picks from the best ingredients on that day. Even though some dishes perennially persist on the menu, their visual presentation and even slight ingredient tweaks may surprise you. Trying a number of  Tokuyoshi’s signature plates across different seasons, I noticed the momental emotions entering some plates. The superb Calamari Full of Himself were once served stuffed whole-bodied (as in the leading image in this critique), while more often their white corpses were slid in halves like nigiri sushi and spiked with knife. The hedgehog lid covered their seasoned tentacles minced with anchovies and tomatoes. Italian flavours, while the technique was distinctively Japanese. Paired with Olives and Green Tomatoes juice completing the dish in Tokuyshi style. 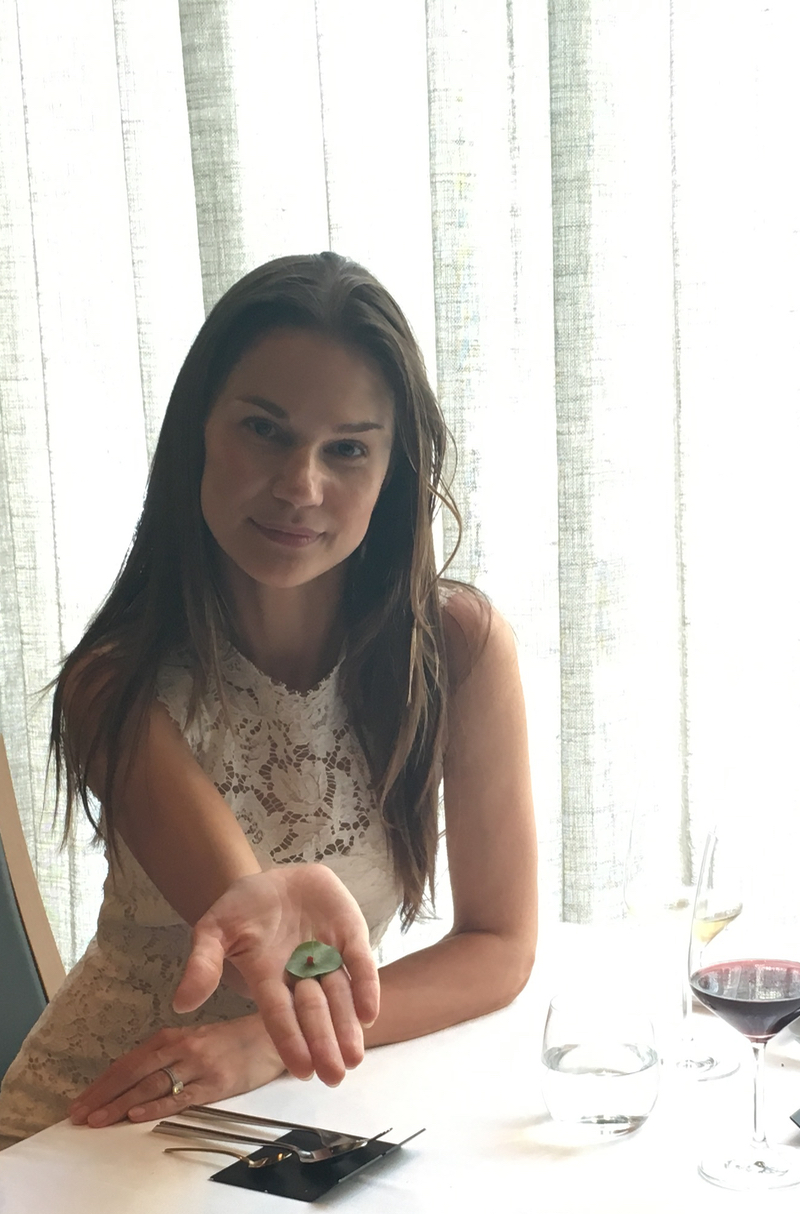 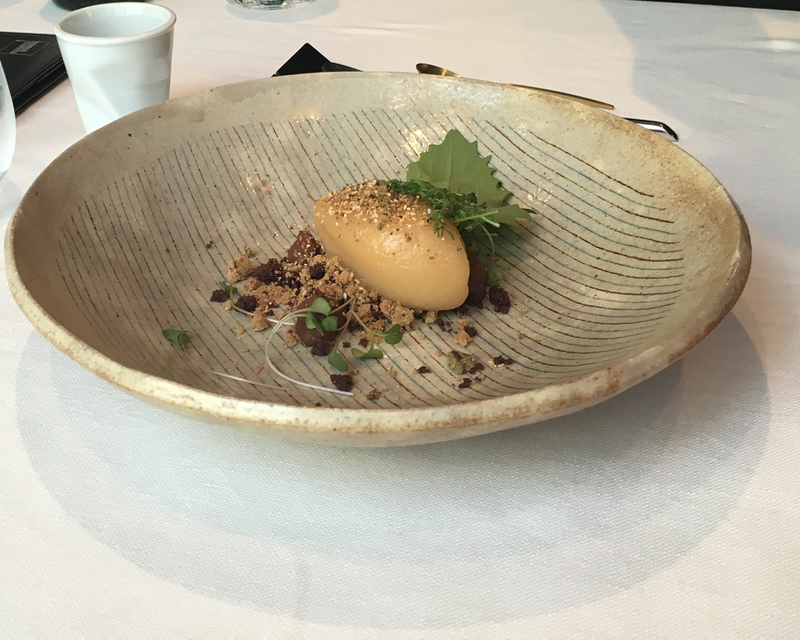 Deservedly, the Michelin guide awarded one star for his creative flare. The difference between his and Boturra’s artisan smoldering on the plates being not only in the visual elegance better achieved by the three stared team at the Osteria Francescana, but also in the finer balance of taste. Tokuyoshi’s food is yummy, but with some plates he can tame his effort to do less than is necessary to impress. Like in Modena, he carefully sources his ingredients, often from environmentally sustainable organic farms like Hombre, that has for decades revelled in closed production cycle organic dairy farming in the Parmigiano Reggiano area.
From the desserts I was taken by the Concrete & Earth charcoal meringue, a grey like the Seventies cement roofing covering a scoop of artichoke gelato, mascarpone and herbs on a salty almond a cocoa biscuit. Next to the complimentary morsels served at the finale, this was less sugary like the typical Japanese sweets.
Completing the restaurant circle, the wine waiter is also very open and each time surprised us with authentic,some beyond the Italian borders unseen local wines like Traminer Aromatico from Sicily. Not from the North-eastern corner of Italy as I would expect and perfectly suitable for the intense flavours in Tokuyoshi’s food. Previously a deep Etna Bianco, Fiano di Avelino, and other rotating by the glass selections of the maître d’ cum sommelier whetted our appetites for more of Tokuyoshi’s food. By the bottle we ordered the new Tuscan Bordeaux blend by Paleo that we found a much better value than the pricy Ornellaia. Being fairly adjusted to great wines, the first time I sipped on Paleo was in its birth region of Maremma at a lunch break between the wine tastings at Tenuta San Guido (Sassicaia) and Ornellaia. 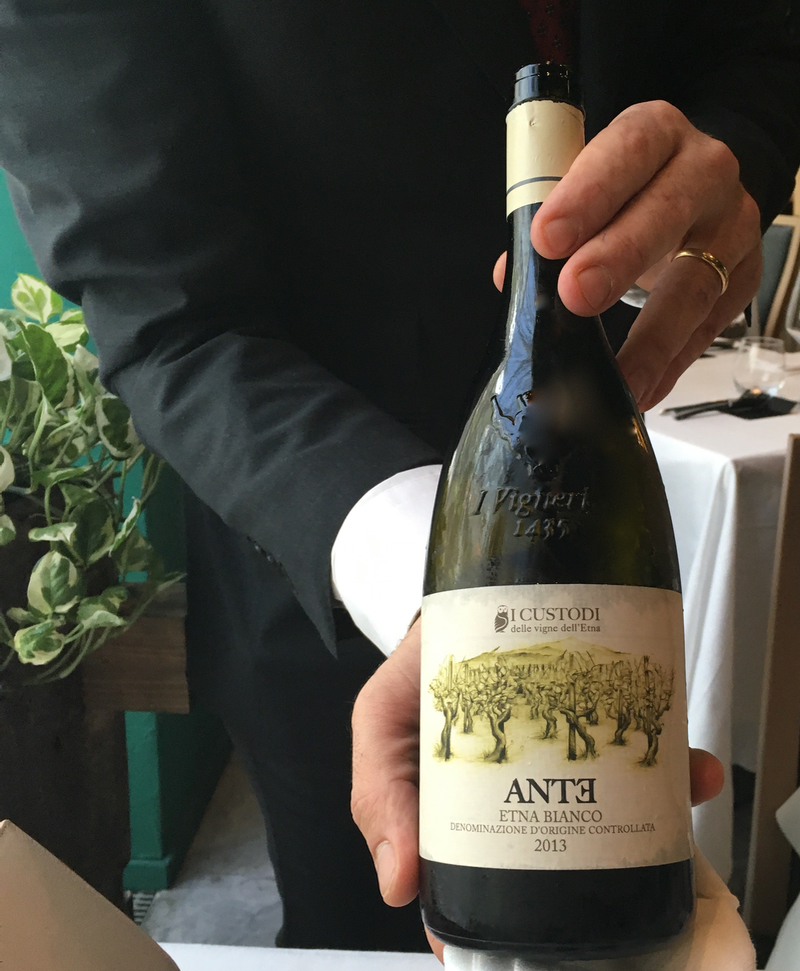 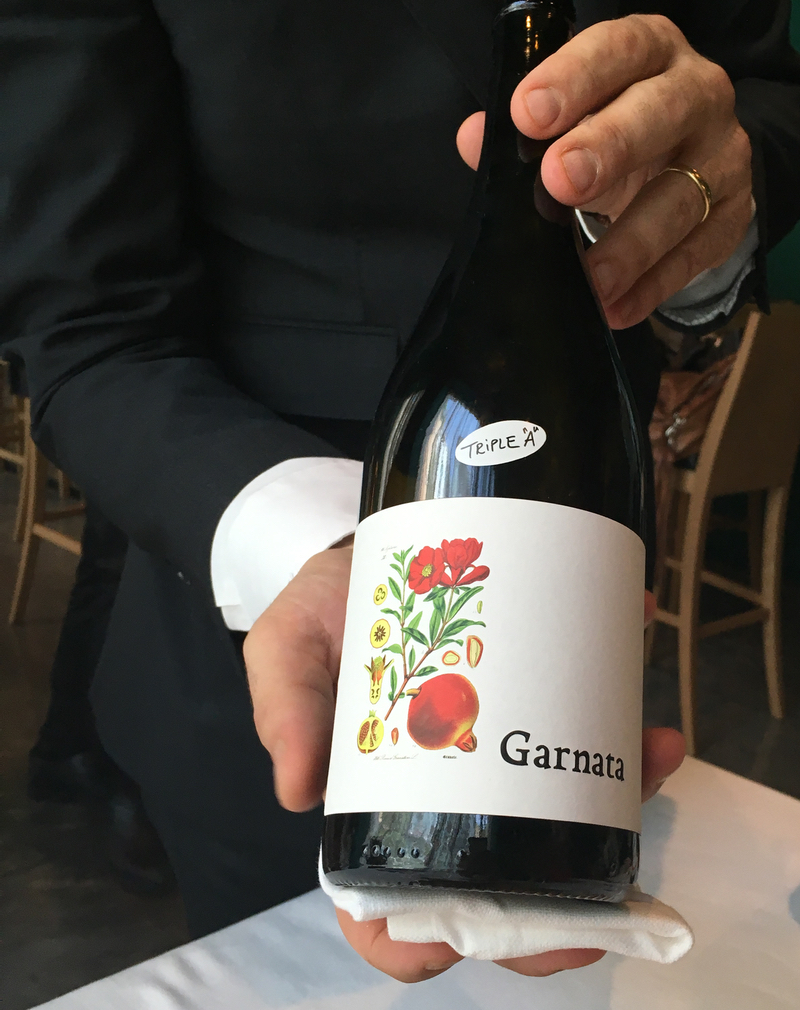 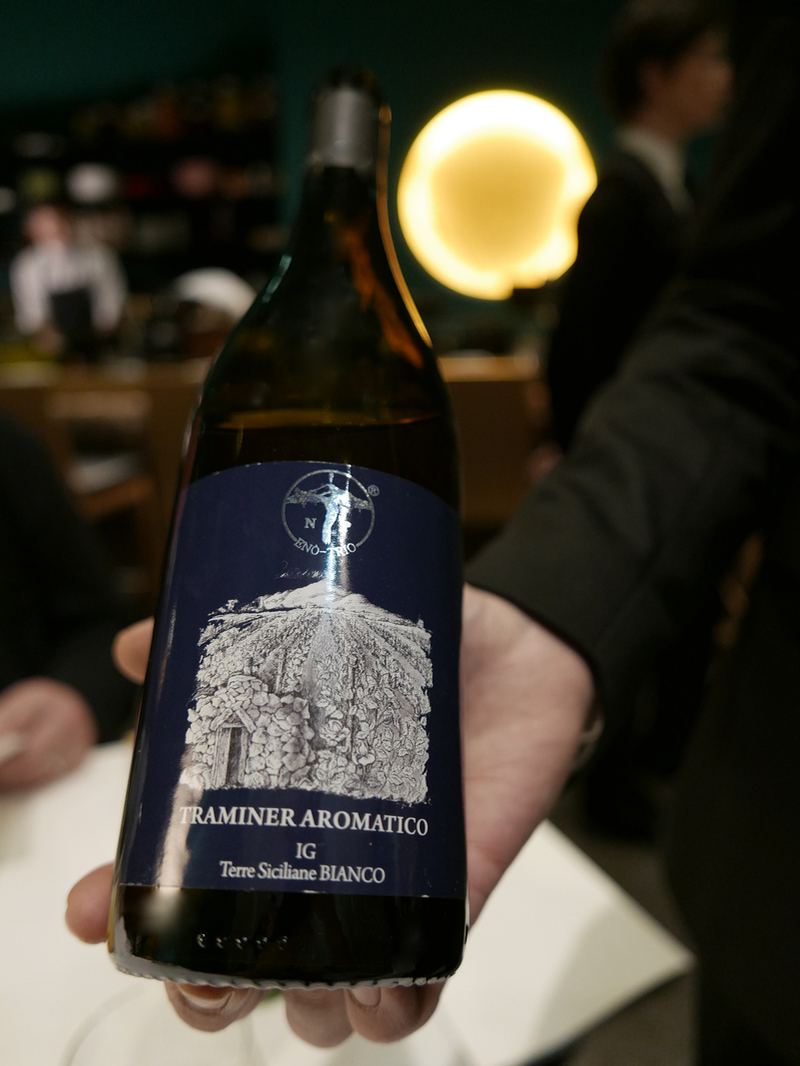 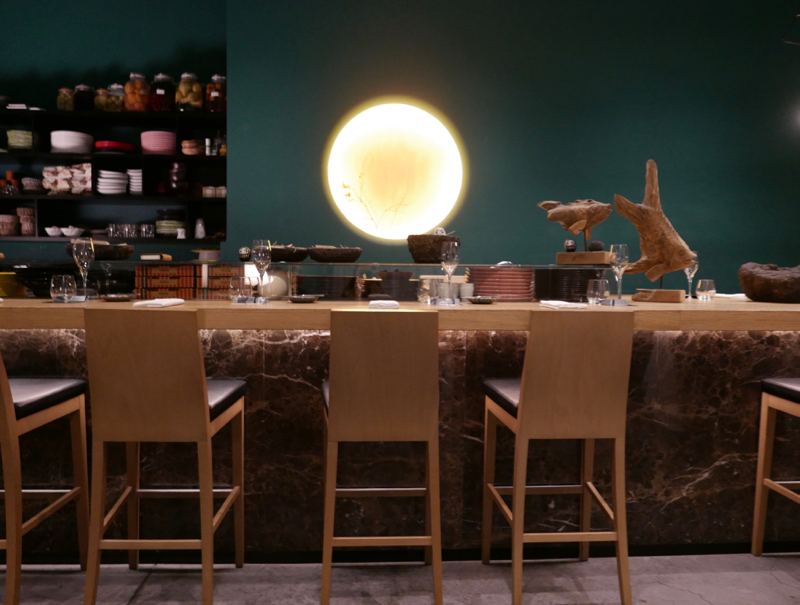 The contemporary, by Italian lights and marble driven interior design of the intimate restaurant (five tables, plus a long counter), with a massive, sleek wood topped and comfortable counter seating hints at the culinary marriage to Japan. In the capital of Italian fashion and design Tokuyoshi’s rendering of the east meets west cuisine opens up the gates for more to come. Recently opening his first restaurant in Asia, Table by Yoji Tokuyoshi inside the once tallest building in the world in Taipei, the chef still remains faithful to his Michelin stared baby in Milano. While Tokuyoshi is not the front row type, he pops out from the hive of his back kitchen attending personally to his regular guests. The humble Nippon talent leaves the spotlight to his assistants behind the counter seating, but our experience proved that he is the star keeping it excellent.
Tokuyoshi,Via S. Calocero, 3, 20123 Milano
+39 2 8425 4626
Lunch only on Sundays; Dinner Tue-Sun 7-10:30pm