Ahead of Dan Barber‘s farm and garden sustainable culinary fame, Alain Passard envisioned a less animal cuisine sourced mostly from his three organic gardens that, like the best wines, genuinely reflect the French concept of grand cru terroir. Arpège, embodies the flow of its natural French country cuisine in its logo of three curvy waves flowing harmoniously above each other. Many of Passard’s dishes recall that comforting feeling you cherished as a child in Europe when the most delicious treats were served on special family gatherings. 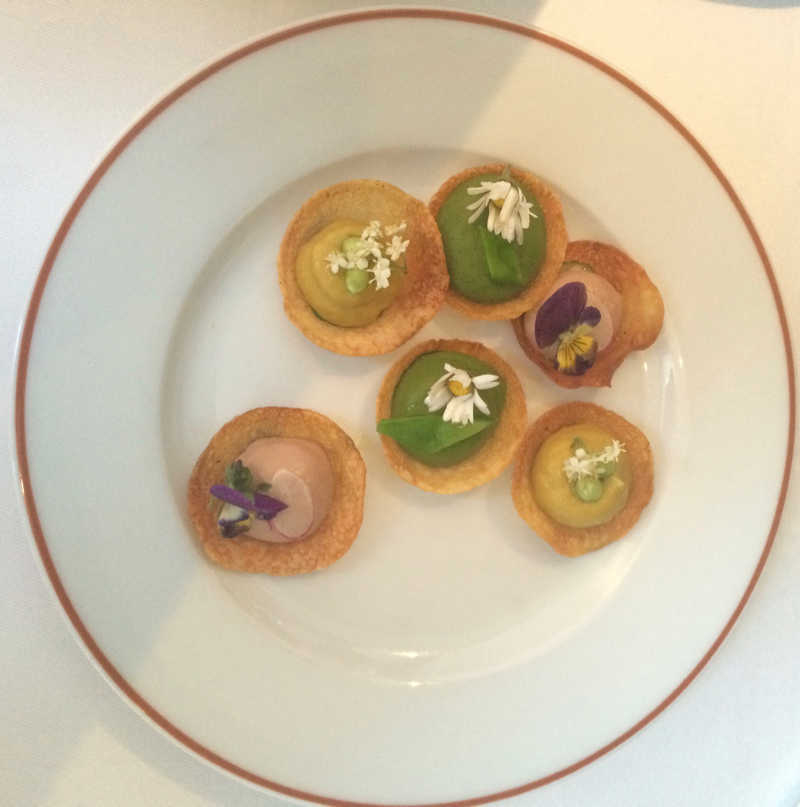 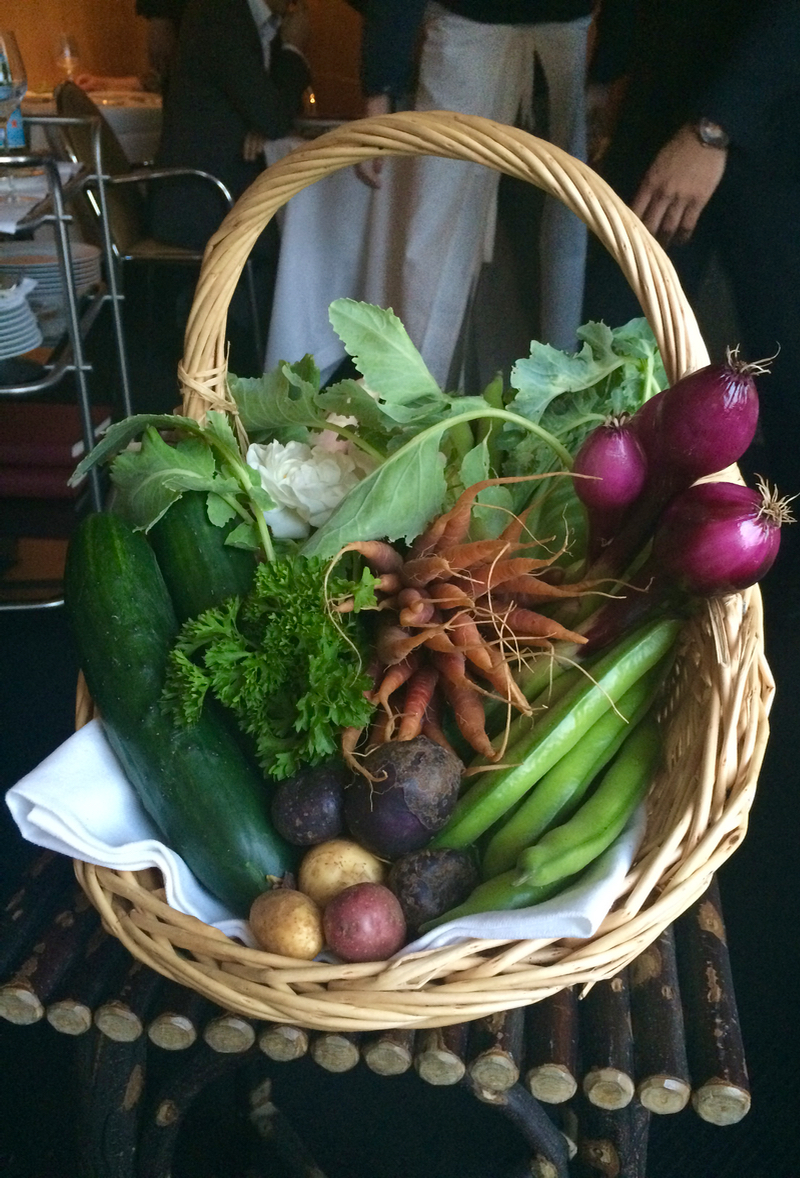 Alain Passard is a national icon not afraid to paddle against the tide of the meat and seafood centric French gastronomic cuisine. Breaking free from cooking meat, he switched to a fully vegetarian menu at his thee Michelin decorated restaurant in 2001. In 1996 Joia in Milan, where we were not fond of the food though, was the first ever Michelin decorated vegetarian restaurant, today even China prides in starred vegetarian cooking. Arpège has upheld its three Michelin status for over two decades, but now also serves its original, slowly roasted meats and seafood (Terre & Mer menu €390) next to the Garden menu (a twelve-course, hearty Le Printemps des Jardins vegetable tasting at €320) and costly à la carte alternatives. Everything served is super fresh, since the train daily delivers the produce picked that very morning. The food changes daily, the produce dictates what will be cooked, no recipes. For a chef in his 60s, who does not trail TV shows and eschews jet-setting around the globe, but cooks with his team at his restaurant, this is extremely challenging. One hobby though he fits in and shares with his fans in the food recipe collages printed in his cookbook and on each menu’s cover (the “vertical” asparagus) that Alain Passard artfully created himself. Pleasing everyone every single time can be topsy turvy. Our first meal was good, we loved some dishes, but others disappointed, while the second tasting most recently was extraordinary. A low carbon footprint haloes the meal. Still, butter is used in most dishes, we are in Paris after all and not in the South! Genuinely local.
In 1986 the chef and biodynamic farmer in one bought the restaurant (L’Archestrate) facing the human form venerating Rodin Museum from the acclaimed Alain Senderens, one of the leaders of the French nouvelle cuisine together with Michel Guerard, Paul Bocusse, et al. Yet, Alain Passard pushed the limits of the world gastronomy further. Provenance transparency in the print, where the locations and inspirations behind the dishes have formed the menu before thousands of chefs globally joined him. The simple, yet to varied art forms nodding Parisienne Art Deco decoration has changed only slightly from the previous owner. 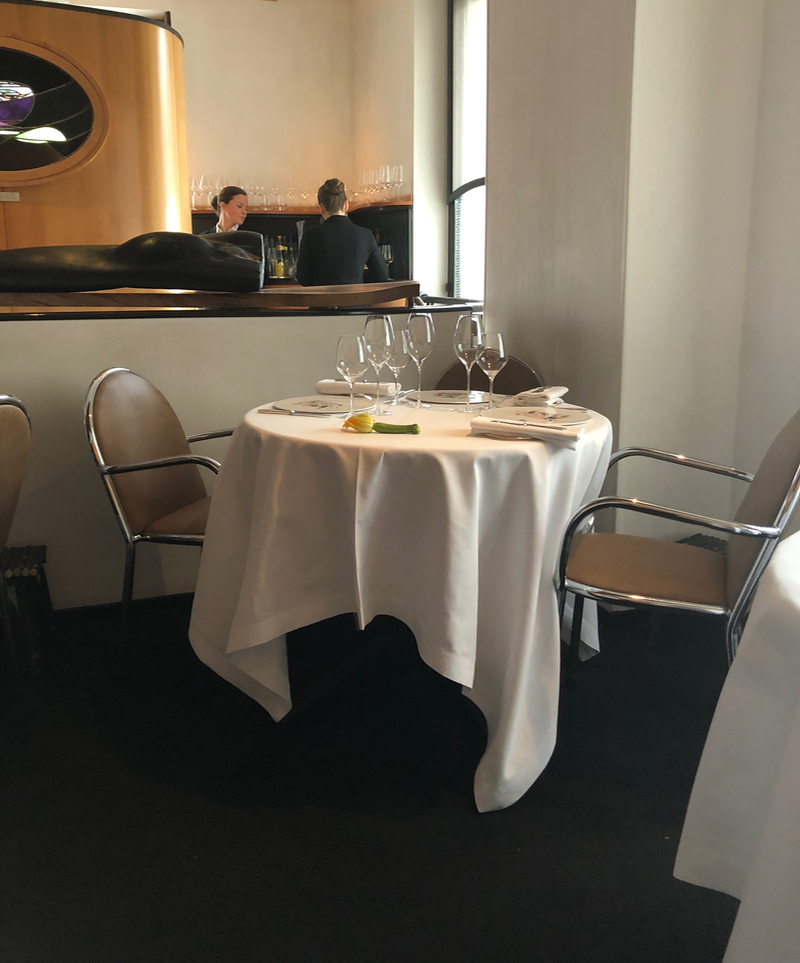 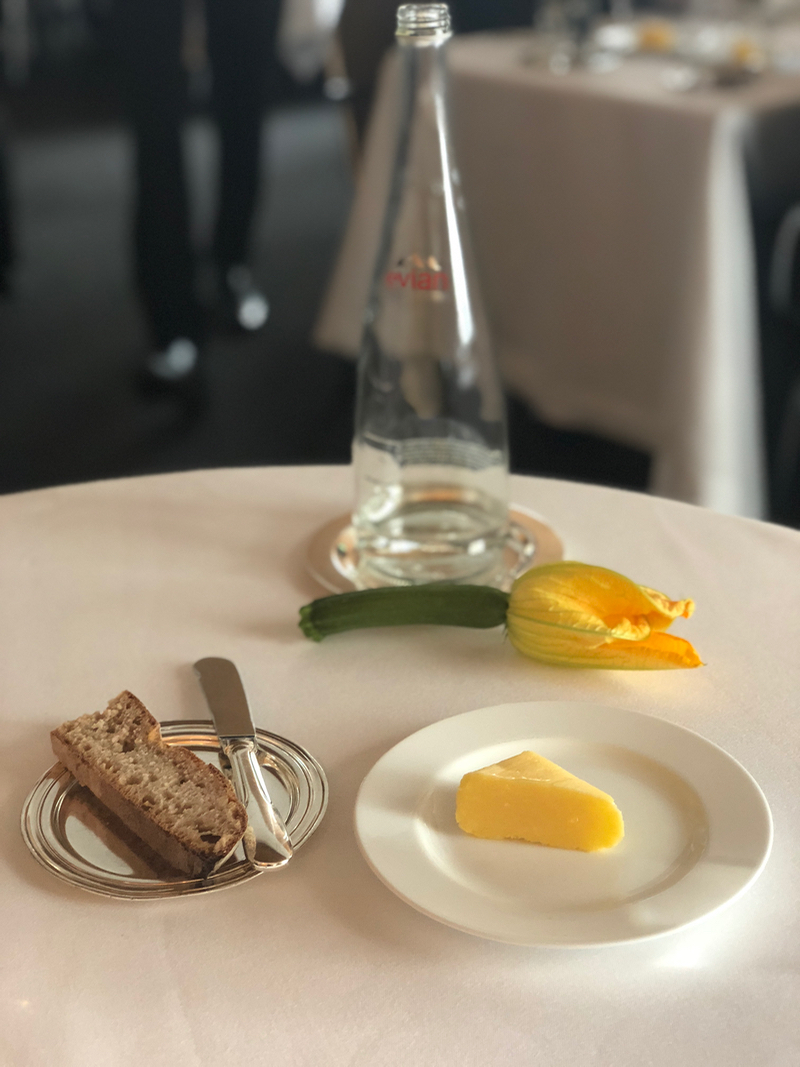 Rejoice at Arpège with Alain Passard

Great ingredients are never cheap in France, so the most “valuable” is the garden lunch menu for €175 inspired by “the gardens this morning that offered us a gustative palette. This is a vegetable stroll proposed by the chef, the association of the senses.” I went for the surprise improvised daily by the cooks, but was further encouraged to include some of the signature plates from the à la carte menu, which I did. Passard humbly declares: “The most beautiful cookery book was written by nature itself!”
On our flowering courgette decorated (prettier than the cucumber on our first meal at Arpège), white-dressed table landed a tiny amouse-bouche of sweetly glazed cauliflower (chou-fleur) tartlet was perhaps too sweet for a first bite, but from now on everything shined on the sweet-tooth inclined menu. Like the amazing, my granny’s style country bread. Crunchy, without a burned crust, the miche bread was served with a superb deep yellow butter, refilled, dangerously, regularly.
Teasing our noses with a confit of roasted shallots and fresh herbs laid on a large tarte feuilletée by the table, taking the flaky gratin away to slice, our salivating mouths were rewarded with a triangle decorated simply with coriander and foamy parmesan cream. Slow caramelisation oozed the sweet onion aroma, words cannot describe this delectable discourse between nature and man. 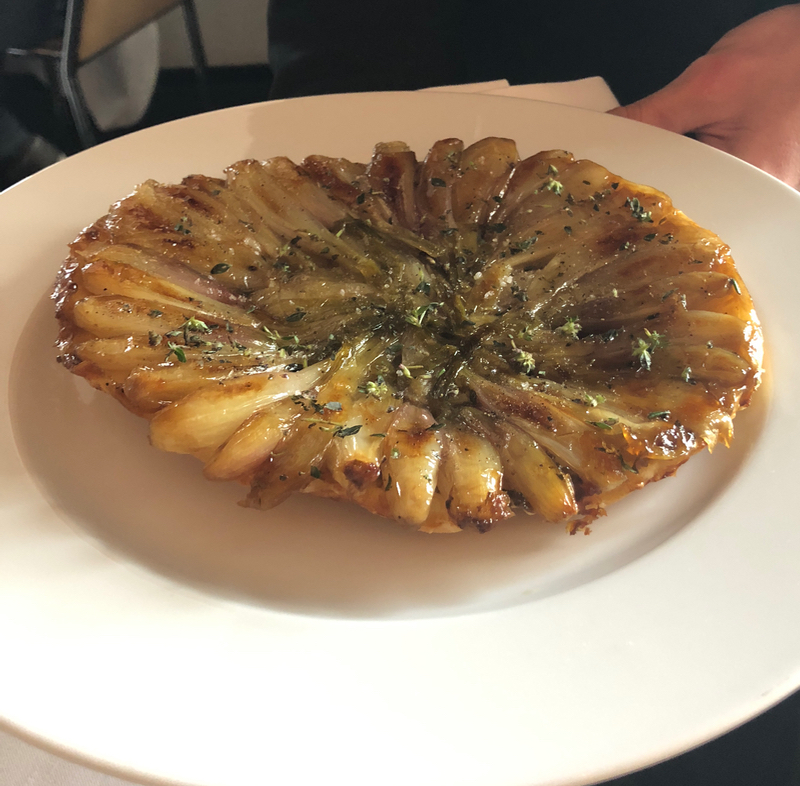 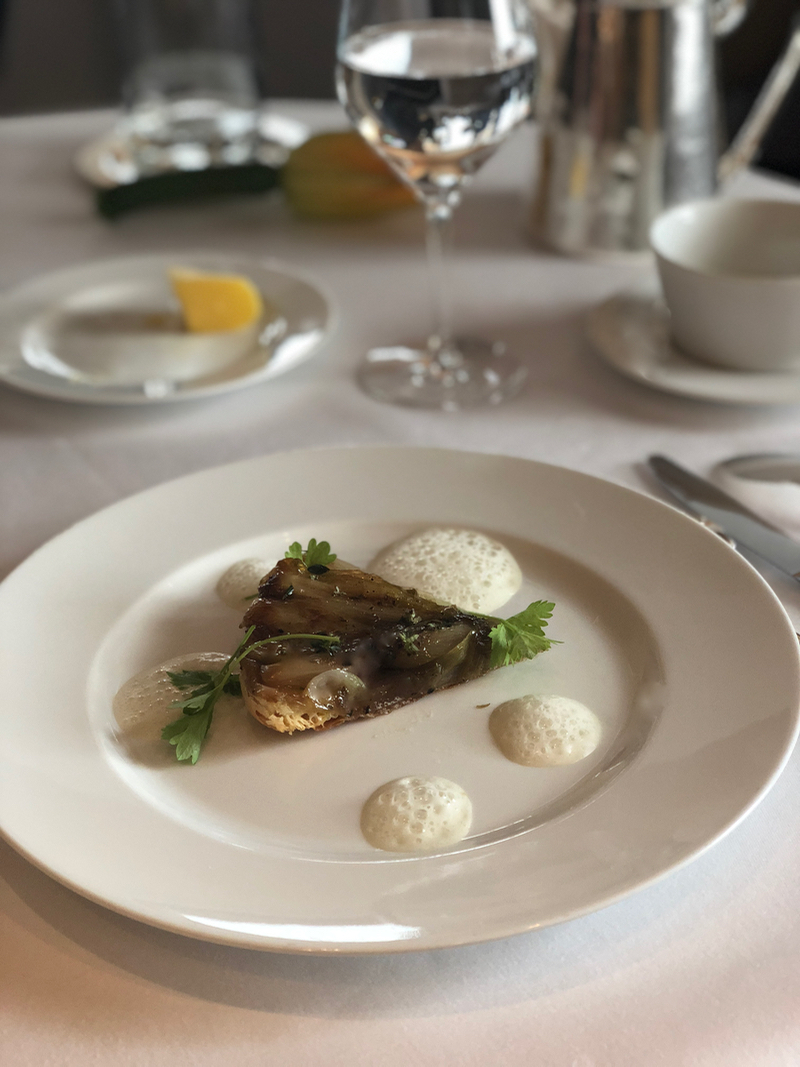 My requested dishes to include were: The signature Cold and hot egg-yolk served in its shell. Generous, creamy smooth yolk on the bottom, a layer of heavy cream topped with a sweet currant syrup blended with Sherry vinegar called for bread. More miche, please! Merci.

Followed, what was by far the best vegetable sushi we’ve had. No fusion cuisine, but even the best sushiyas in Tokyo cannot rival that perfect marriage of vegetables and rice. Passard’s rice base was not too sticky, dabbed with the new geranium sauce and covered by thin sliced sheets of (neta) white asparagus for my husband, but my geranium-oil-infused beetroot was juicier. A black Kalamata olive tapenade was streaked around.

Even better were the four colourful garden raviolis – green peas, peas with shells, red cabbage with a Germanic bacon scent, and white shaved asparagus served in a silver bowl. All deeply delicious floating on a nourishing balanced spring vegetable broth.

It was June, a massive white Guécélard asparagus wrapped in an ultra thin layer of rhubarb injecting a gentle acidity pampered our taste buds. There years ago around the same time we had the asparagus from Argenteuil “cuite à la verticale” illustrated in the drawing on the menu by the chef himself.

What seemed like the main plate, the young potatoes Belles de Fontenay from Jura with superb, blanched green peas, white turnips and fèves nested in a light cream broth. Excellent. There are over hundred potato varieties in France, farm from the thousands in Peru, but perfected by the regional pride. French traditional cooking lends itself to Passard’s hands with the land’s jewels to work with. The Vol-au-vent pastry puffed around the potato course at Arpège served on our first visit was decadent. 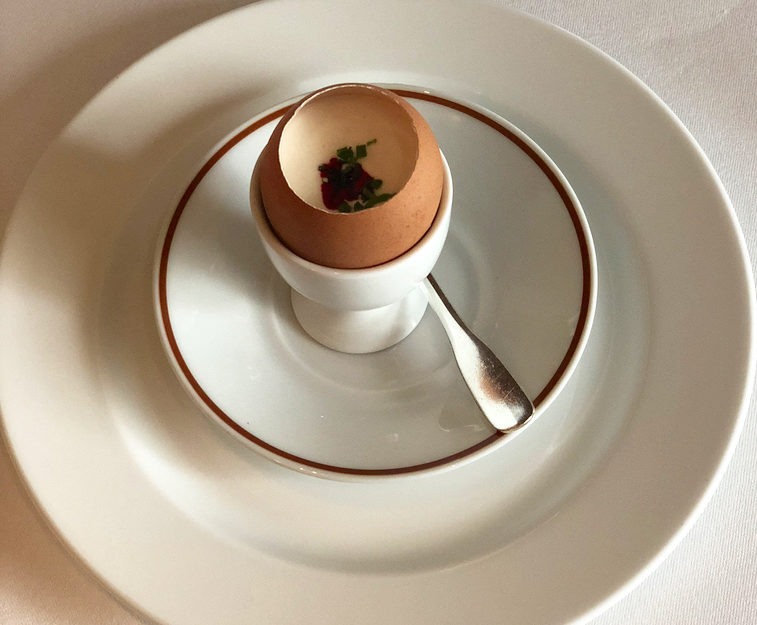 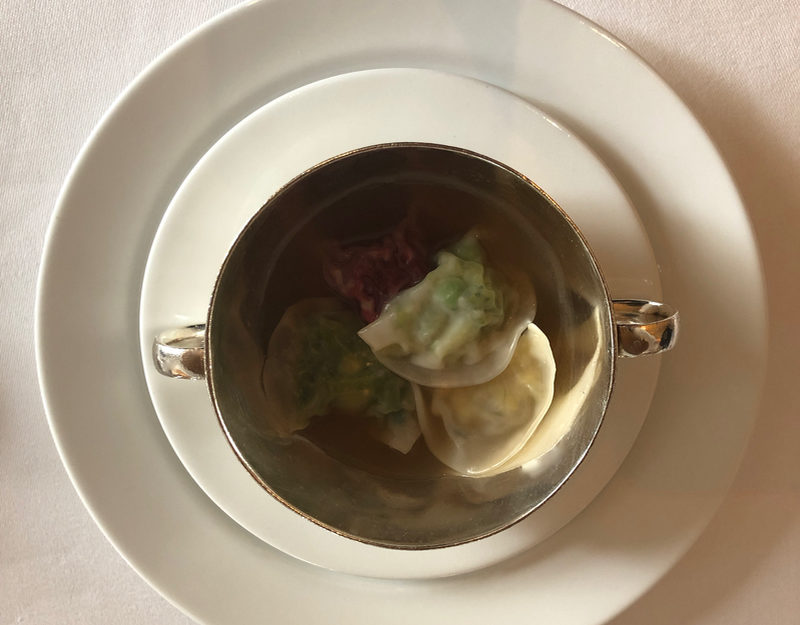 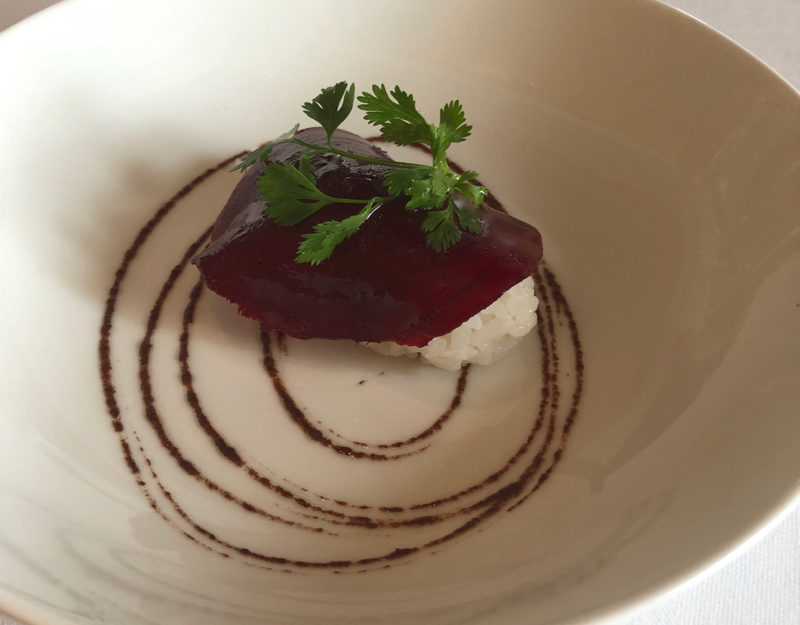 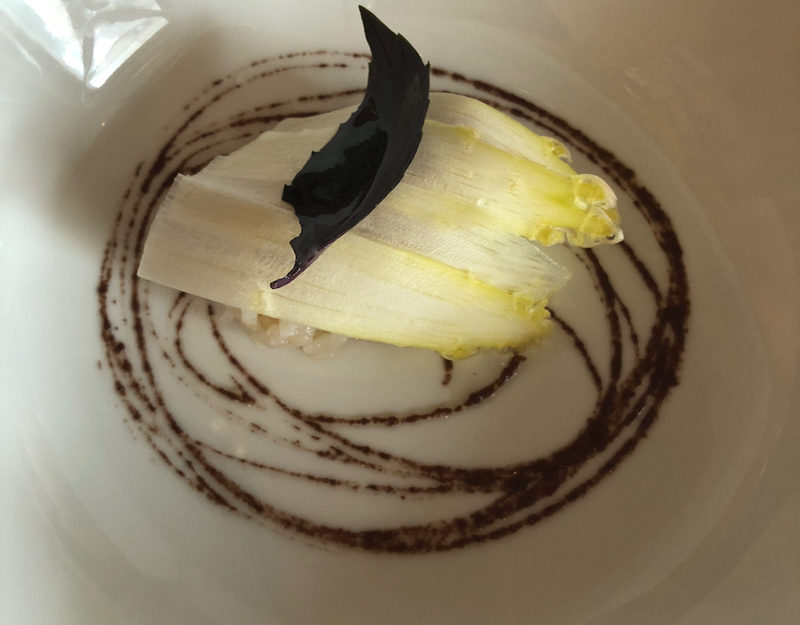 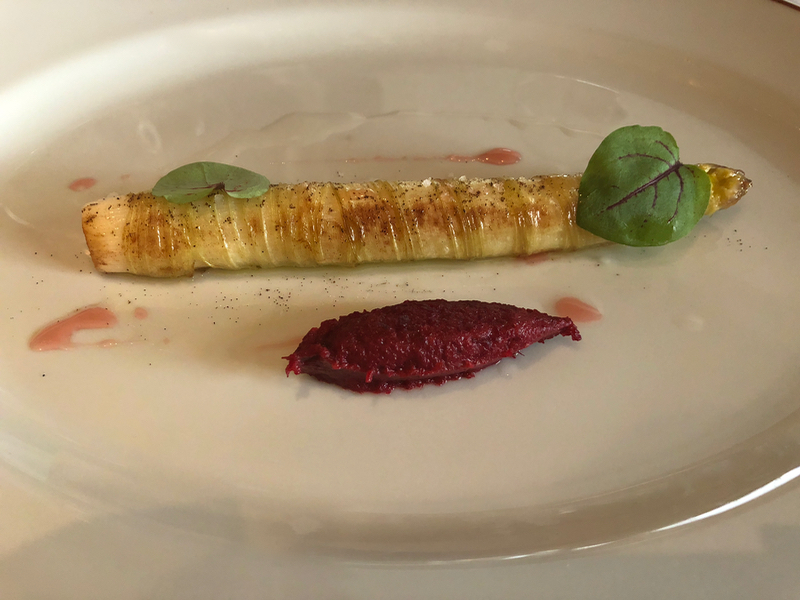 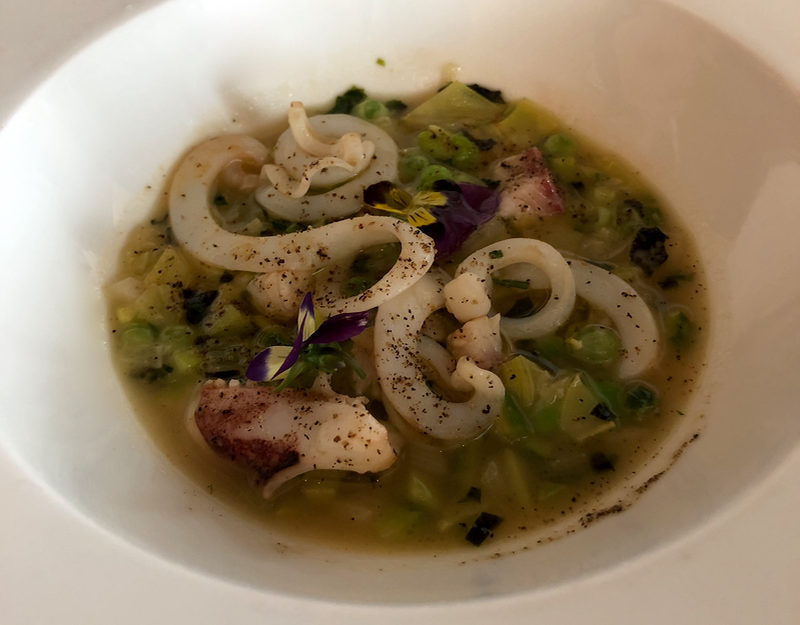 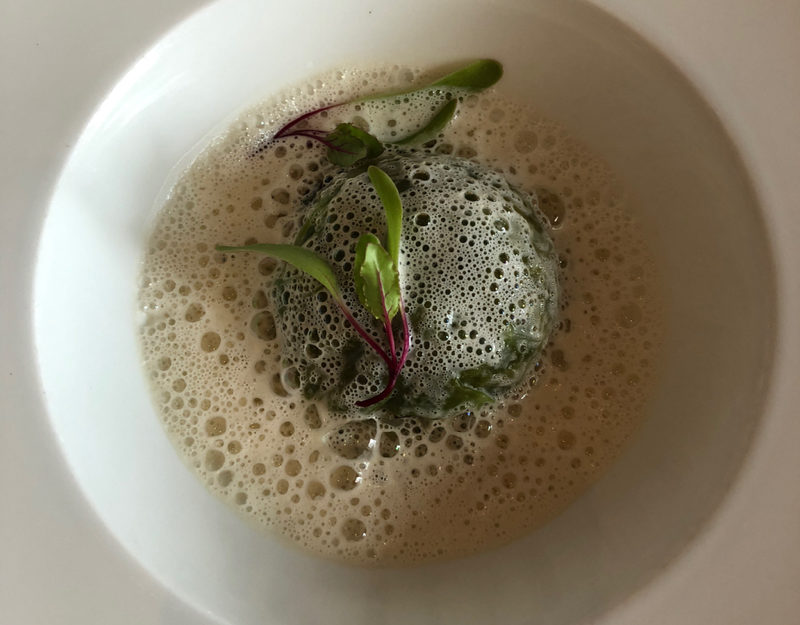 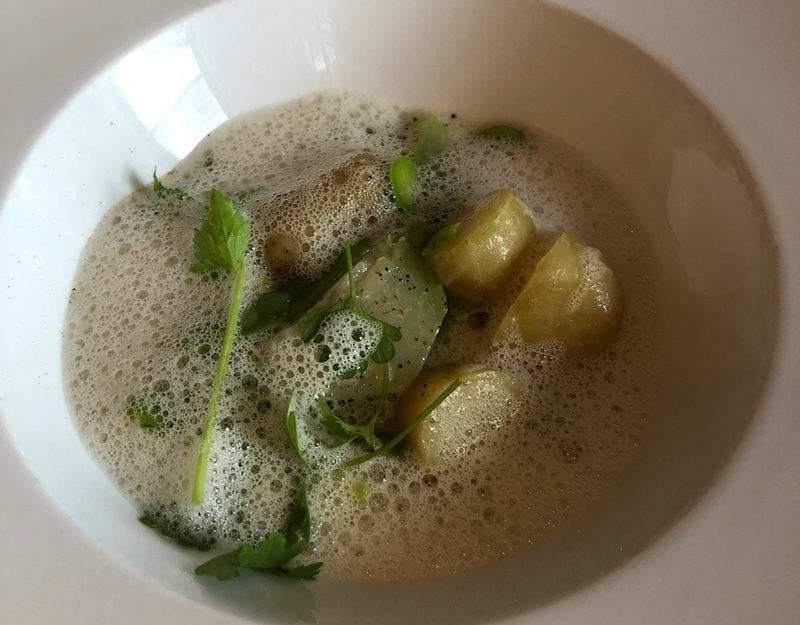 Unlike at many, strictly tasting menu gourmet establishments today, at Arpège they are more flexible. The garden lunch menu can include meat and seafood. My husband ordered the sublime Seafood from Golfe du Morbihan in Jura wine sauce with new potatoes and the lobster. Paraded to his hungry eyes preceding the marvellous crustacean’s de-shelling, perfectly pink and grand, served with the same young potatoes I had, peas, turnips and white Jura wine creamy sauce. A whole leg of roasted lamb made its round from a table to table to the guests who ordered it. The rotisserie brought to reality Passard’s morning Instagram post. Succulent, family sharing style, somewhat the meat connected the strangers dining at Arpège on this occasion. This is a communal dining in grand style. 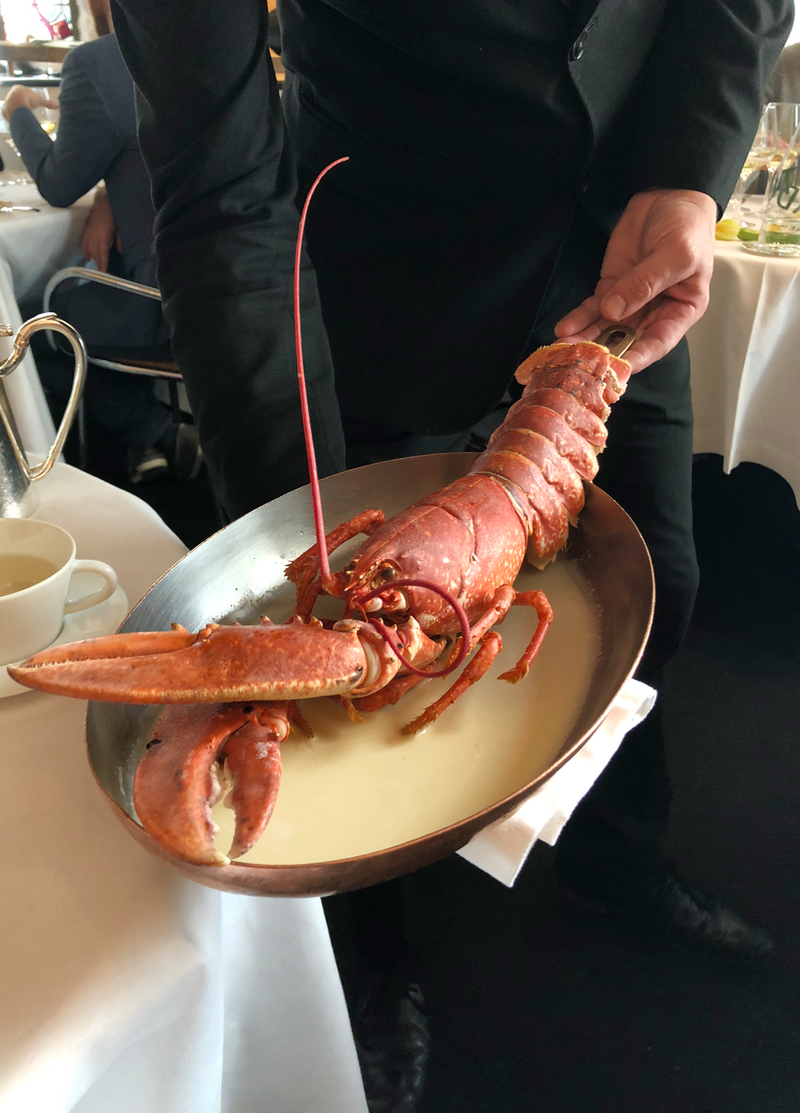 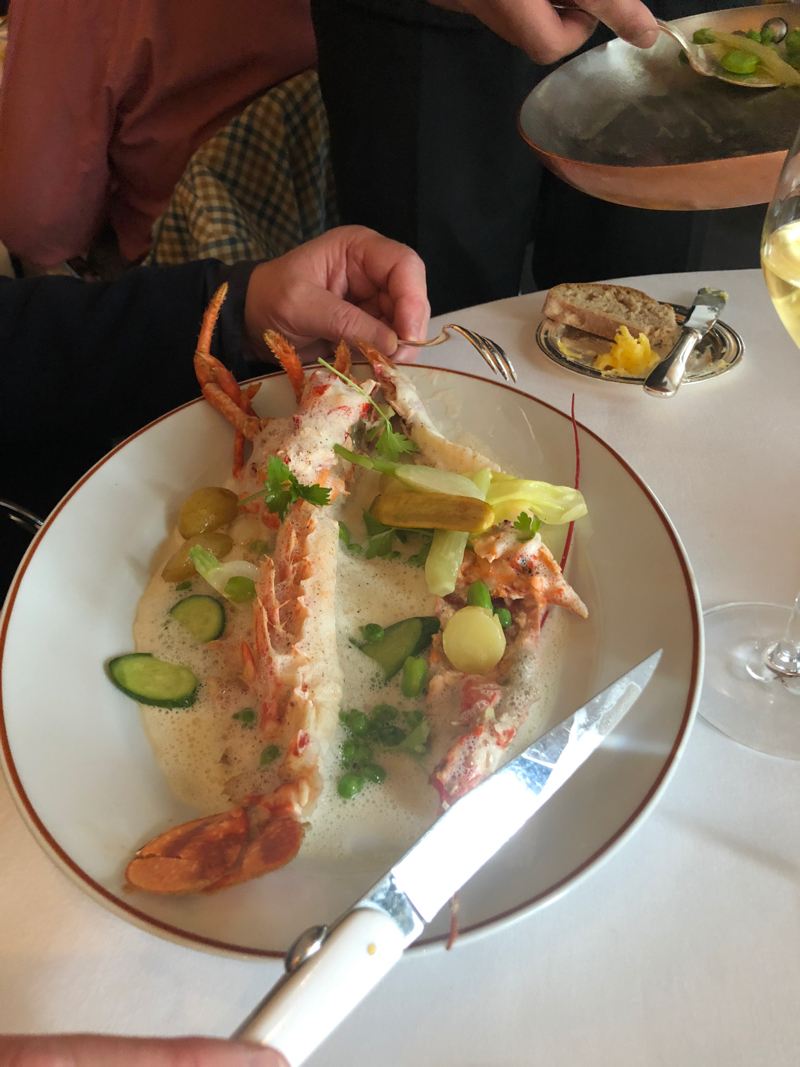 The first dessert of an almost melted coffee ice cream transferred me to childhood when all the kids in my family mixed the ice cream with a spoon in a bowl for as long as it melted into a creamy smooth, Sicilian almond granita-like, consistency. We just loved it that way! Served with a superb verbena infused crème anglaise poured over with liquid caramel, it was a sweet bomb. Also the second dessert of Hay ice cream filled profiterole in a glazed honey milky caramel sauce with caramelized almonds (Profiterole glacée à la flouve de nos praires, caramel lacté) was perfectly executed but too old school sweet for me after such a large meal. Glad I did not order the larger portion for €50 from the menu. During our first meal at L’Arpège I craved the coup de coeur of French pastry chefs, the Millefeuille “caprice d’enfant“, that was personally my echelon of a cake. Flaky, crisp yet densely filled with verbena scented crème anglaise, sweet just enough, perhaps the “vagaries of childhood” were imprinted in my quirky tastes or was the charm of the verbena (my favourite herb)? 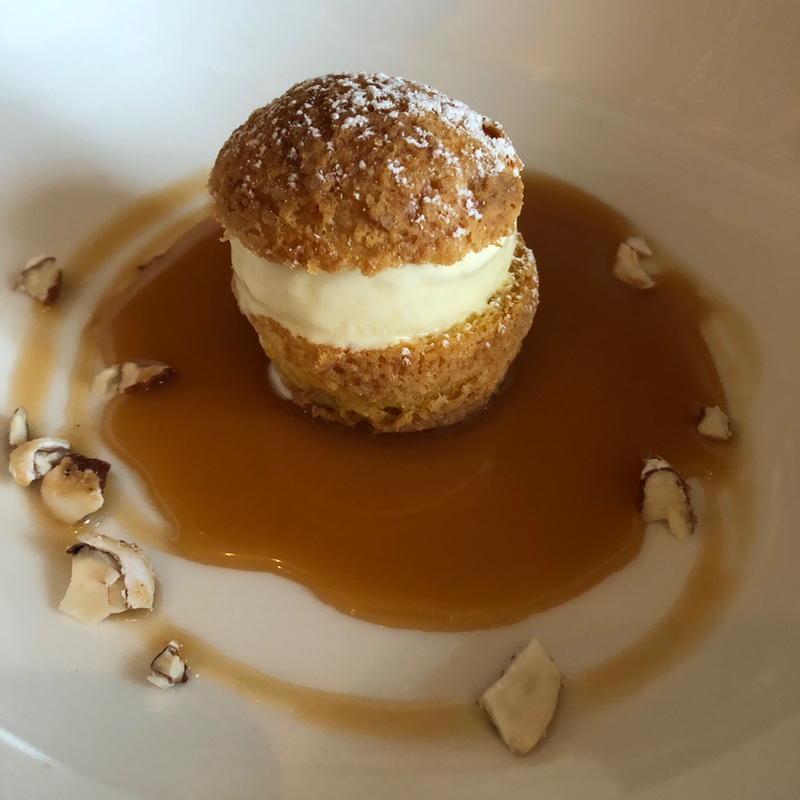 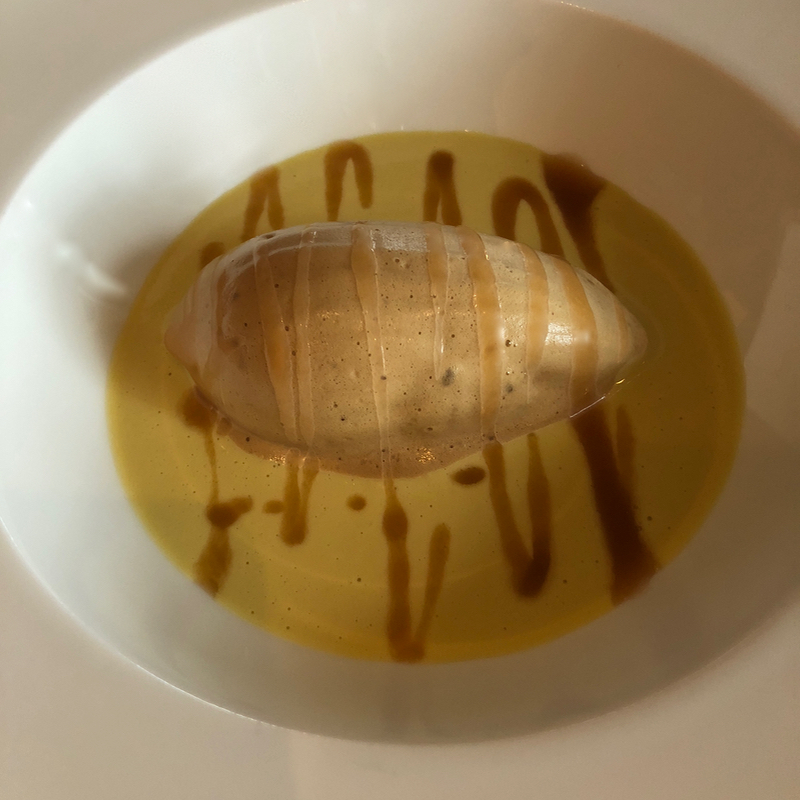 With tea or coffee the traditional petits fours are served – superb caramelised herb tuile, nice herb cookie, salted “caramiel” candy, chocolate and nuts with puffed rice nougat, and mini cream profiteroles. I requested a fresh garden herbs infusion – a digestive blend of thyme, sage and verbena. It also superbly pairs with the lunch if you do not wish to imbibe on wine. Passard always comes around, chatting with each table, with some regulars he even sits for a late lunch inside the restaurant, as he greeted us, me praising the aromatic garden produce, he lifted my teapot and poured me gently more.

By the glass (around €15), wines can be better matched with your surprise garden lunch menu, but the French-focused wine list is good. We had a superb bottle of red Burgundy, the 2008 Mazis-Chambertin Grand cru ideal for the three star dining occasion.

You do not just taste the pure quality of the ingredients, but you feel the joyful spirit in the dining room. We relish in the lunches at l’Arpège, somewhat they transform you away from Paris to the countryside. Whether it is the power of the produce or chef Passard’s culinary mastership, the friendly, knowledgeable service, proud to be working there, but not snotty like at some other Parisian gourmet establishments (Astrance,…), make the meal memorable. Arpège has a private dining room downstairs next to the toilets. Beware, the narrow steps are treacherous, particularly for these bon vivants imbibing on wine in heaps. 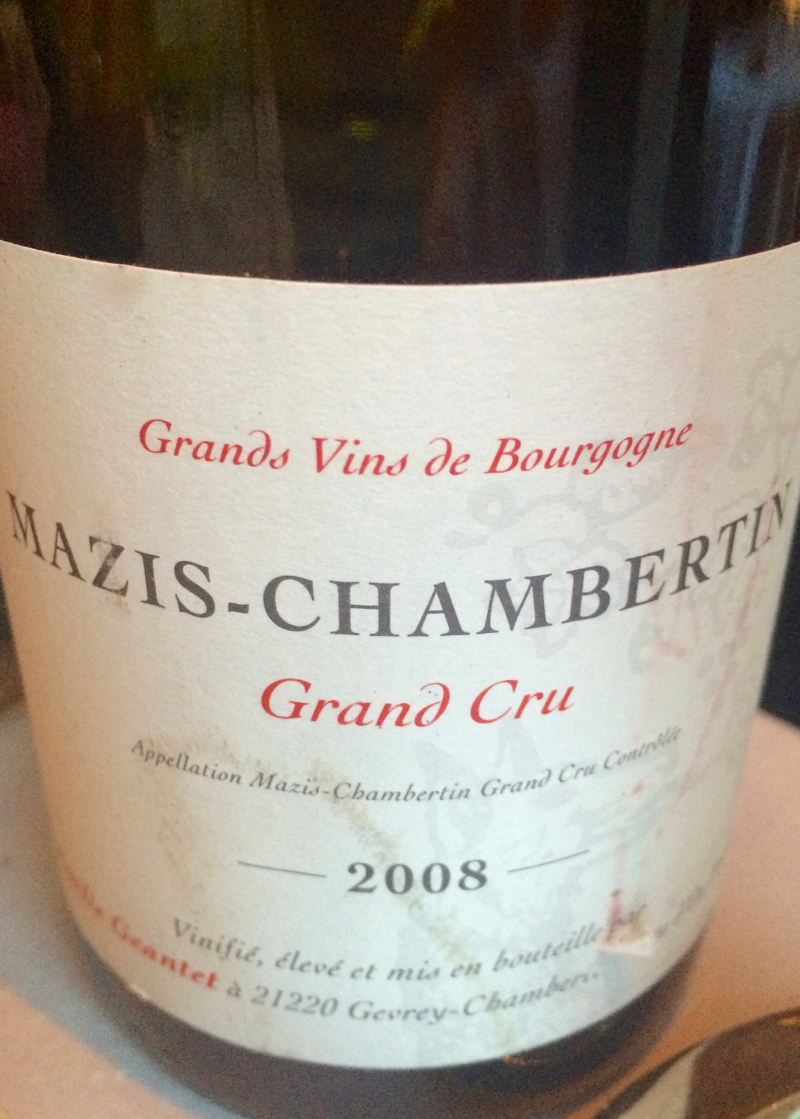 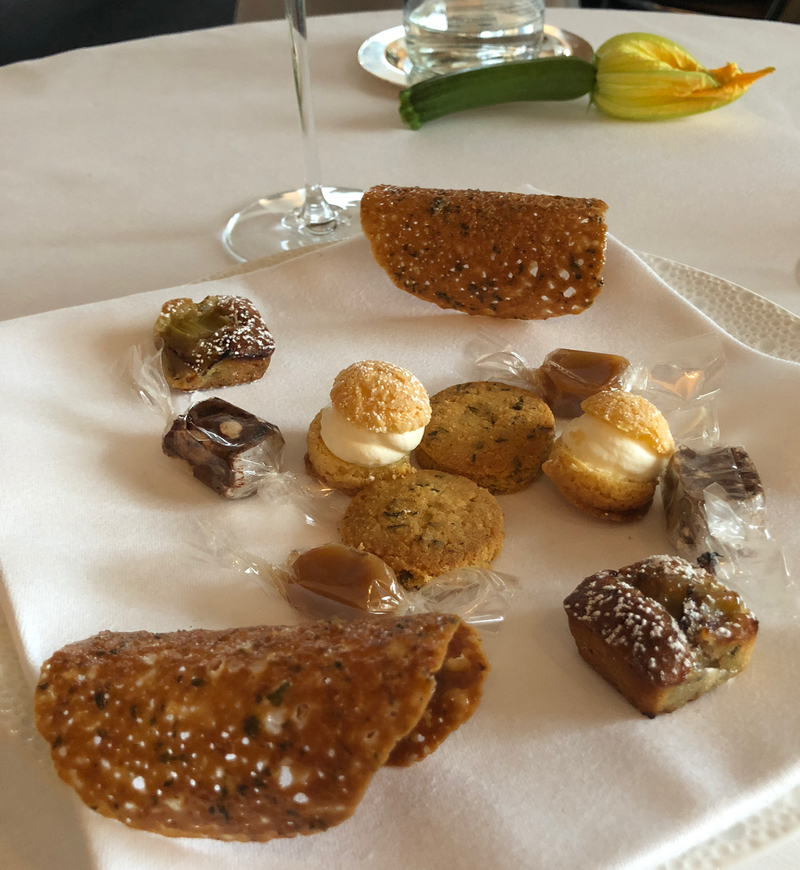 A legion of the world’s greatest chefs went through the kitchen Arpège – Alain Solivérès of Le Taillevent, Christian Le Squer of Le Cinq at the Four Seasons Hotel in Paris, Pascal Barbot of Astrance and many other Michelin or bistro style preferring chefs. Grand French chefs like Alain Ducasse (at the Plaza Athenee) were inspired by Passard’s grand cru garden concept, now highlighting the gems of France on their menus.
As we rustled out the homemade caramel from its cellophane twist on our way to the airport, we reflected that this meal was like a great holiday feast served by your super-chef grandmother, well if you are lucky to have an in-house culinary maestro as I do.
It is expensive (usual for a Paris three star meal though), but hardly anybody can complain leaving unsatisfied from Arpège. Almost three hours later, after devouring the flow of indulgence streaming from the kitchen, we heavily rolled ourselves out of the restaurant. The chef stood up from his late lunch plate that he shared along with a friend, a genuine, wide smile and great thanks followed by the adieu. À la prochaine! I mumbled in my limited, foodie French.
The 48hrs cancellation fee at €220 per person pushes to a commitment. Additionally, confirm your table, either by e-mail, or by telephone, before the gourmand randez-vous chez Alain Passard.
If you live nearby, you can subscribe to the newsletter for weekly garden delivery – grand cru vegetables and fruits at your doorstep, lucky Parisians!
Lunch (res. 12noon-2pm) and dinner (reservations from 7:30pm) daily except for weekends (the chef is “in the garden”). Closed in August.