The Chef’s Table at Brooklyn Fare has entered a legendary status on the New York culinary scene. The whispers of the hedonistic tongues have tipped the heavily Japan-inspired, in French-cuisine-trained chef Cesar Ramirez as the gastronomic revelation of the metropolis for years. 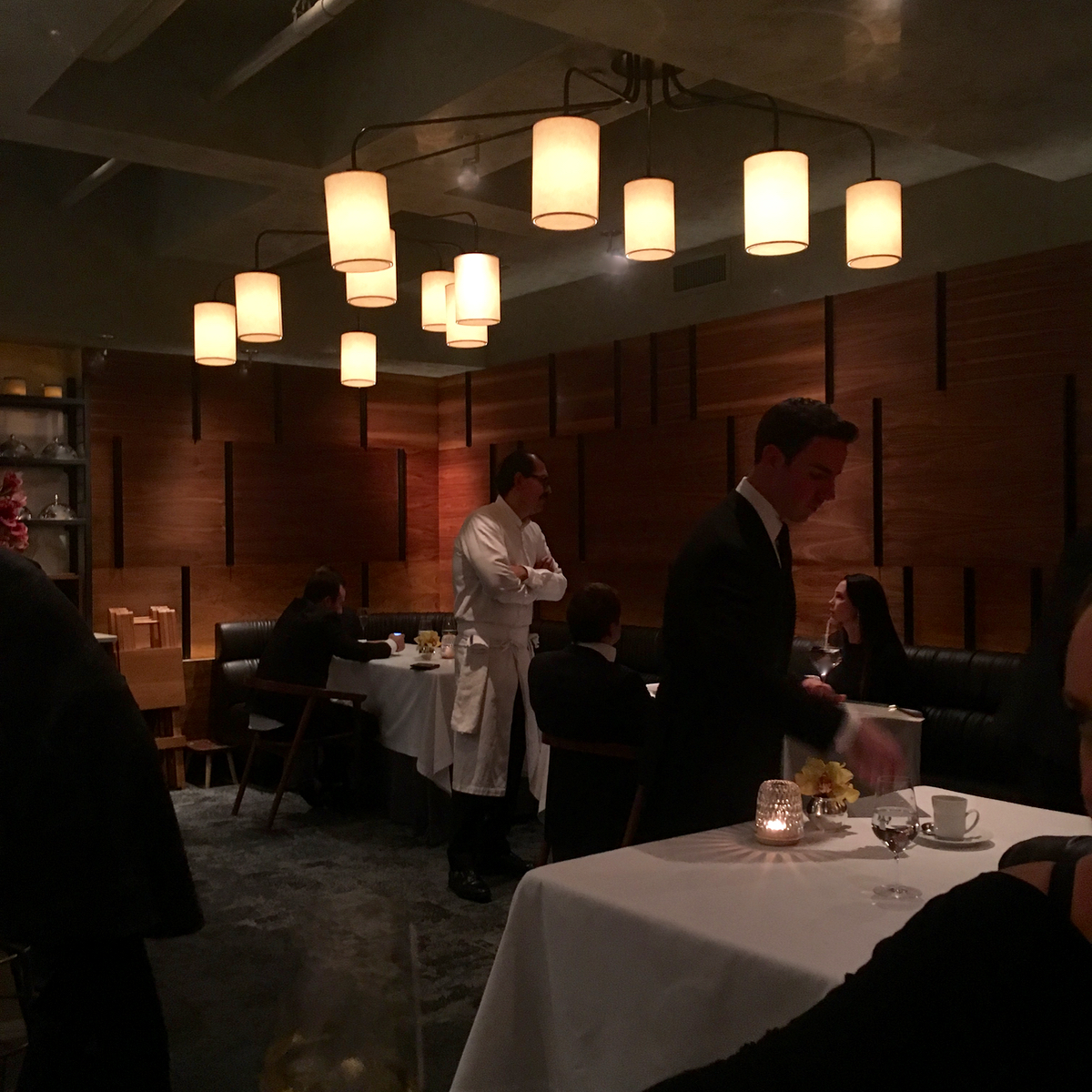 Many firsts filed the tasting menu only gastronomic restaurant into the golden stash of the Big Apple. Not the counter concept since Robuchon had already coined that joyful affair with L’Atelier, and Momofuku ko took more affordably further, but as a fine dining staged inside a deli, the signature trait of New York, and being the first three Michelin star restaurant in Brooklyn.

Either changed though three years ago. The Chef’s Table at Brooklyn Fare relocated to Manhattan where the gastronomic competition is rife. The once intimate counter does not square around the kitchen any more, it is larger and there are also regular tables in the second line along the wall. Hell’s Kitchen is not far from the high-earning offices of Midtown, the media giants around Times Square, the residences in Chelsea, and a dart drive to both Upper Sides. More money can pour into its pockets (menu excluding beverages comes at $400 per head, plus tax).

Were the Chef’s Table at Brooklyn Fare in Tokyo, the experience would be less eye banging. Counter restaurants serving about the same quality of seafood and meat, are tossed around like rice grains at a sushi joint there (whereas you hardly find any carbs on the menu at the BF). To par his three Michelin star tasting menu with Tokyo’s Kanda, Sushi Saito or Yoshitake is unthinkable for the regulars at either. 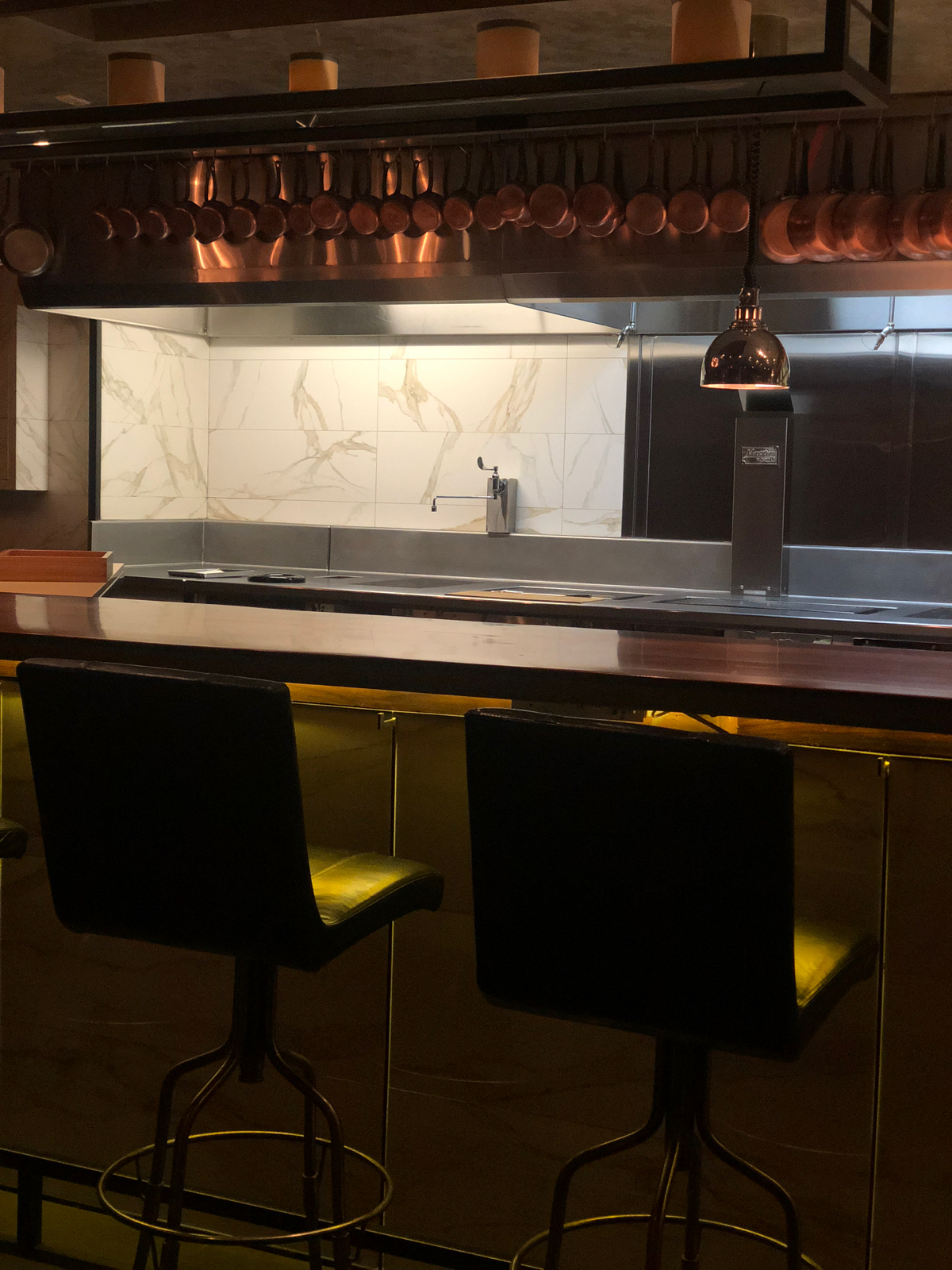 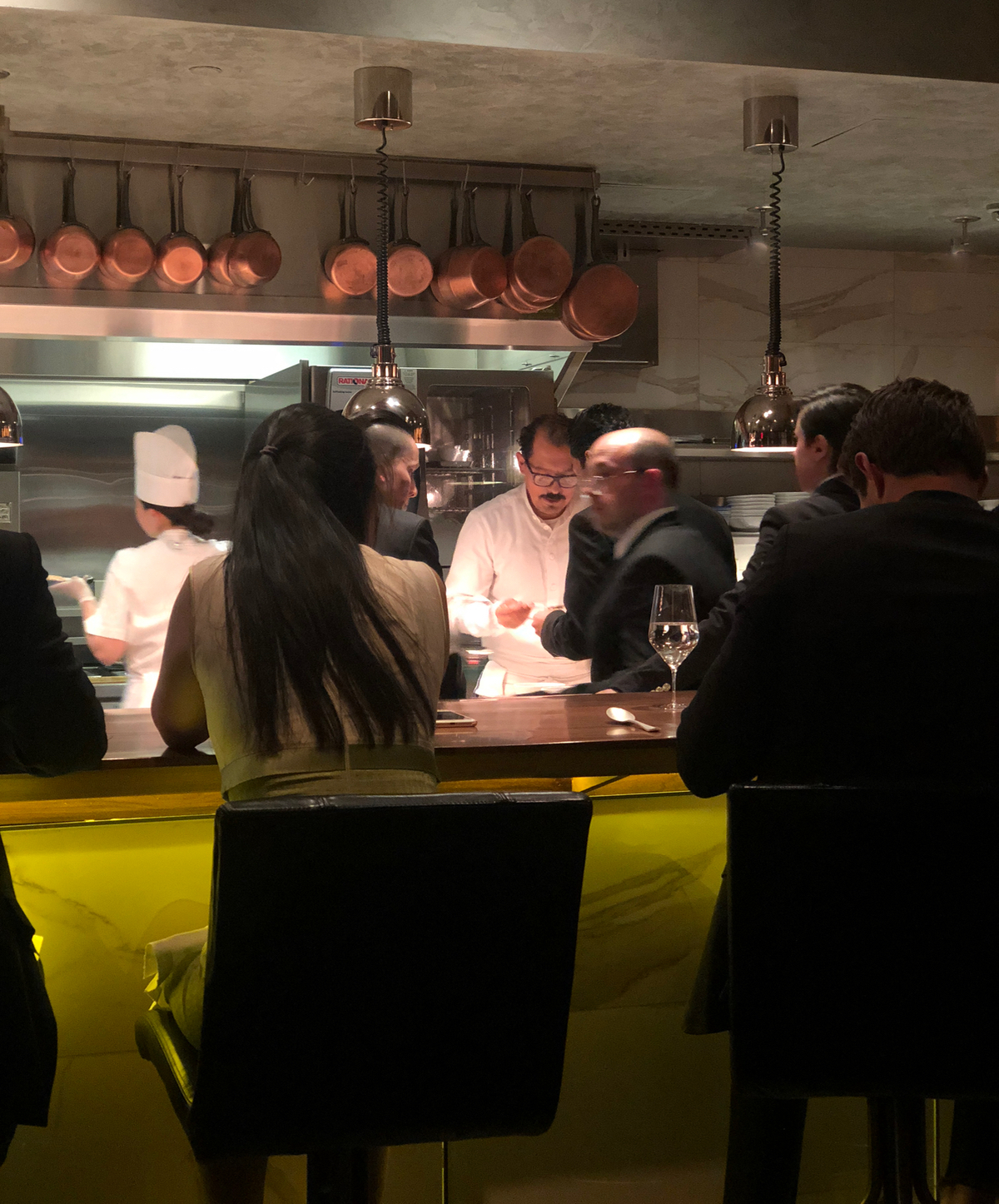 “Won’t I get even a small bread roll or a sliver sourdough?” I asked the waiter, my stomach overwhelmed with the fat and high protein sixth course at the Chef’s Table.  The restaurant will not accommodate seafood allergies, vegetarian or vegan diets. We found the tasting menu off balance. Dining twice in the new Hell’s Kitchen location, the highest echelon of gourmet hedonism in Manhattan served a vitamix of animal, mainly seafood flesh, full stop. “We do not serve bread, madam”, was the answer. It seems that the pricey restaurant keeps some business for its namesake deli that in a speakeasy fashion ushers the well-heeled diners into its fancy troves. As after the previous four digit meal for three, we roamed the grocery aisles of tortilla chips and glutenous crackers to balance the fatty affair. I wished there was a great pizza joint next door, any carb would do. Owned by Moe Isa from Kazakhstan who also runs the three namesake delis, the Chef’s Table at Brooklyn Fare is a savvy deal as each time we spent extra $$ buying snacks to fill in for our no bread, rice or pasta dinner. It was fun though, and getting a breakfast ahead without going off your way is practical. 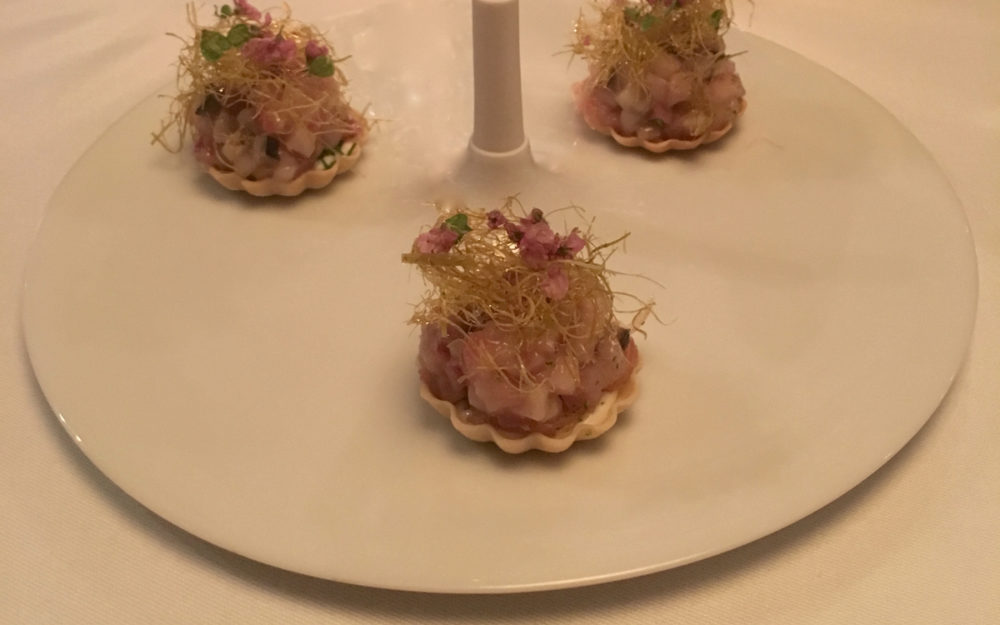 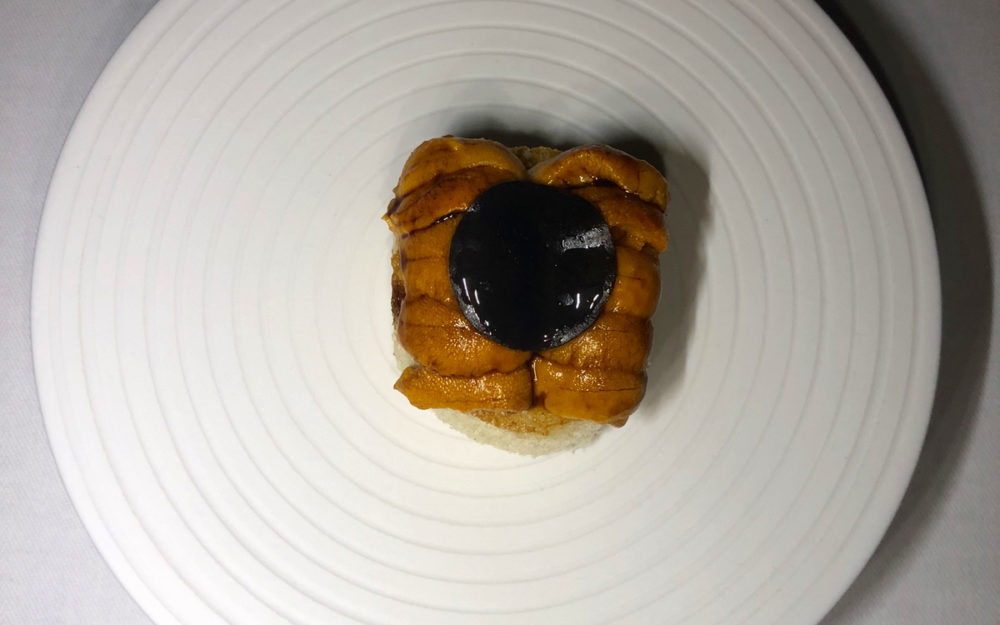 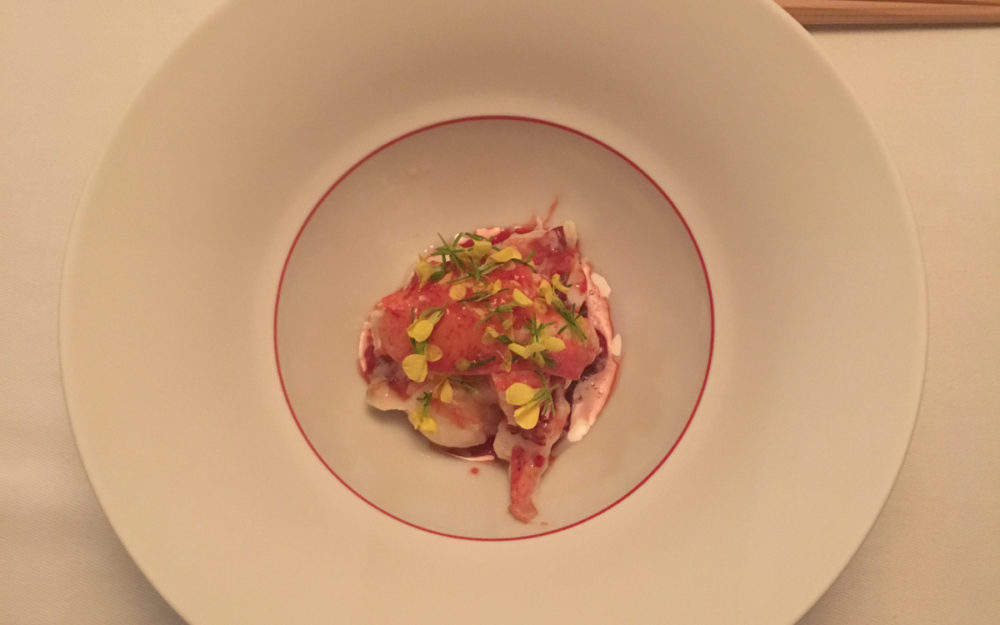 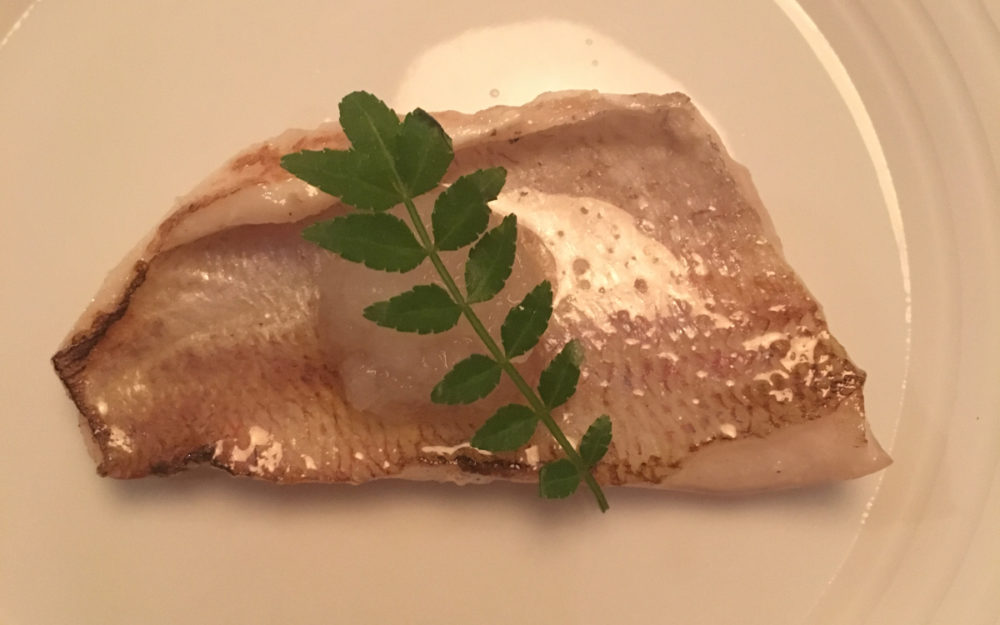 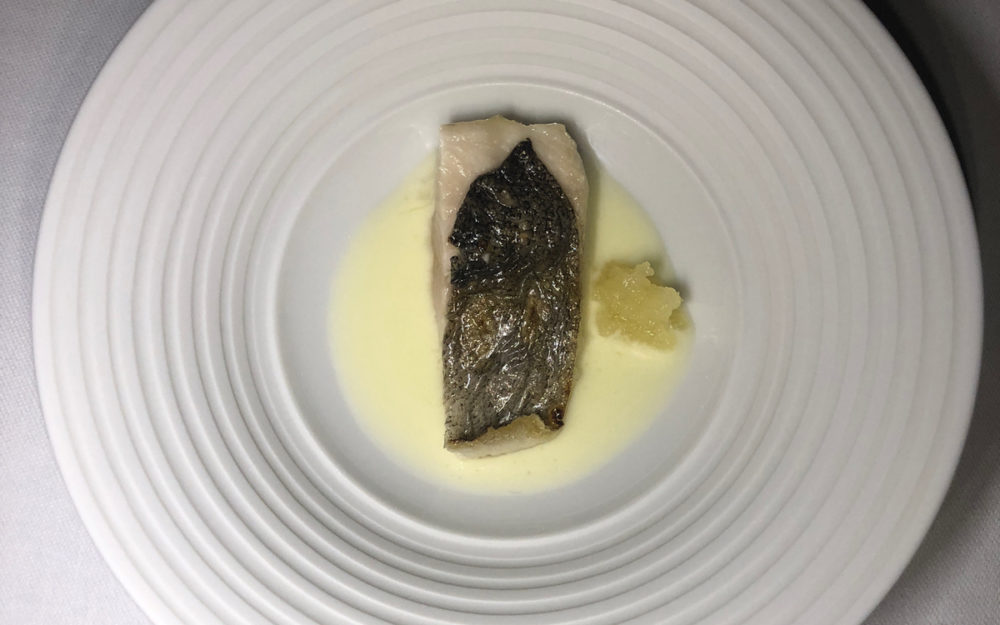 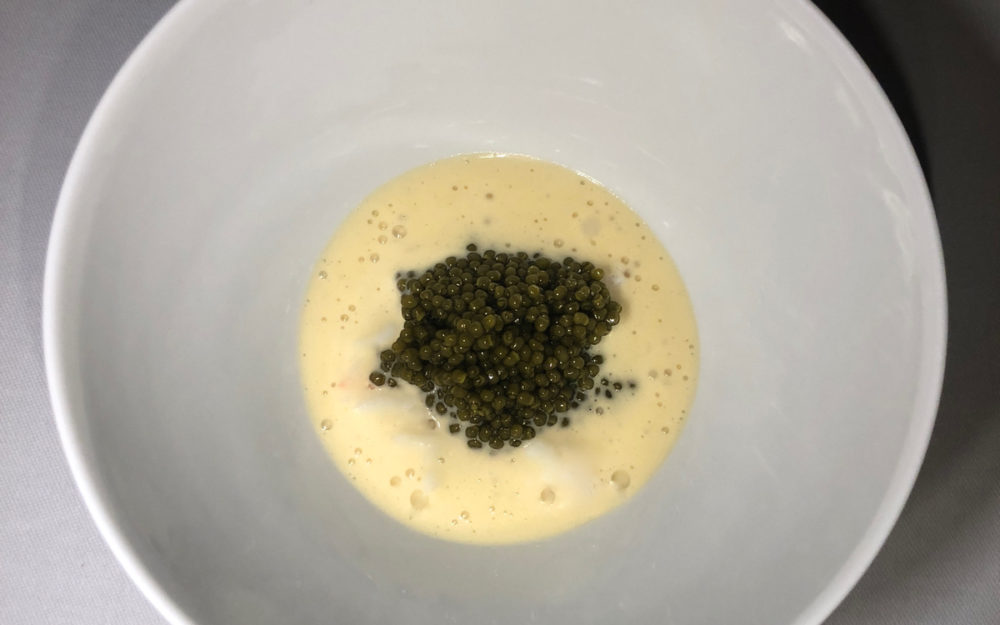 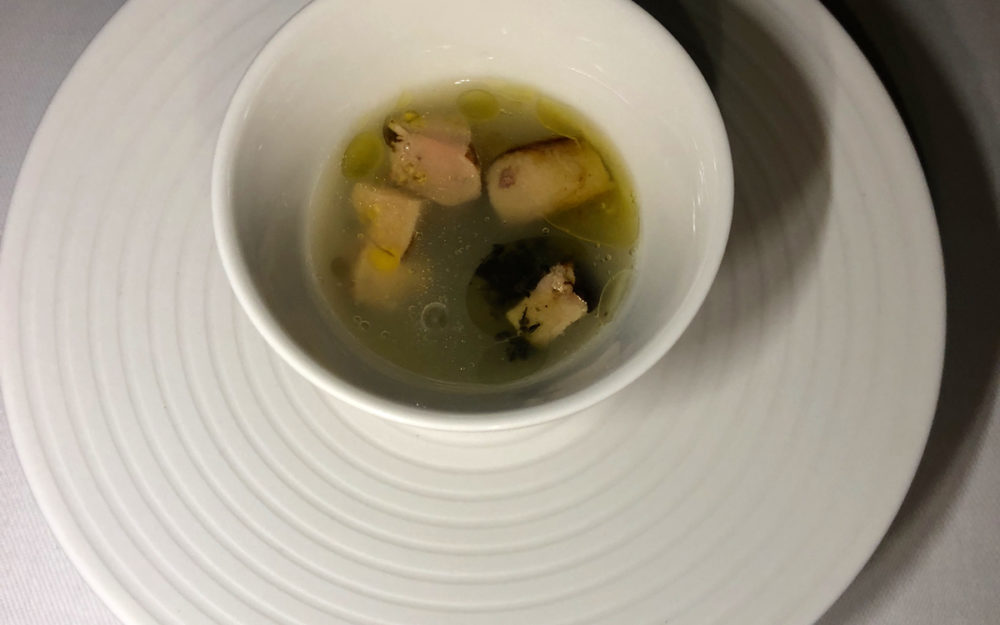 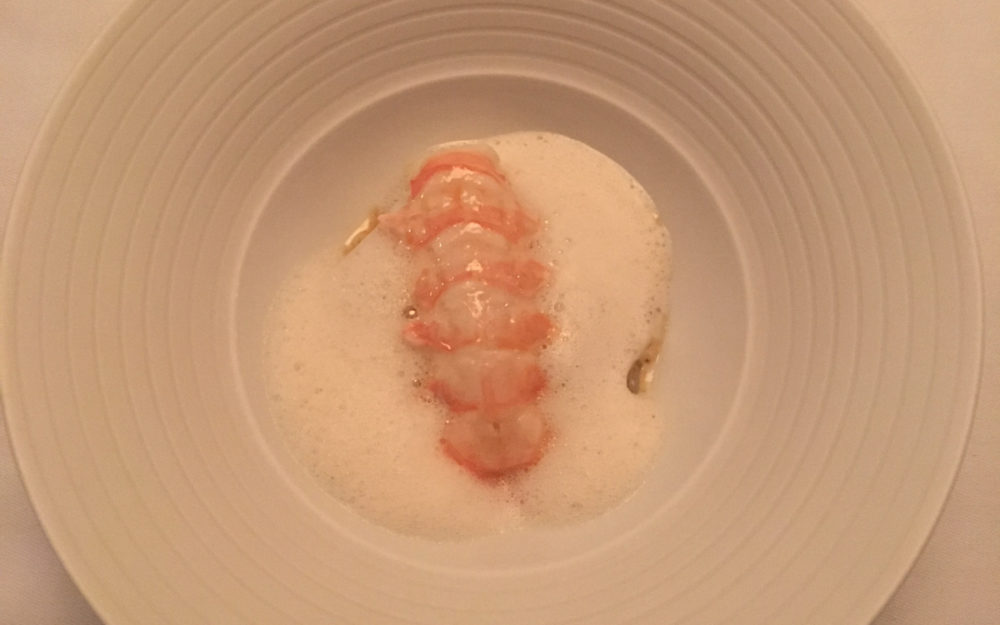 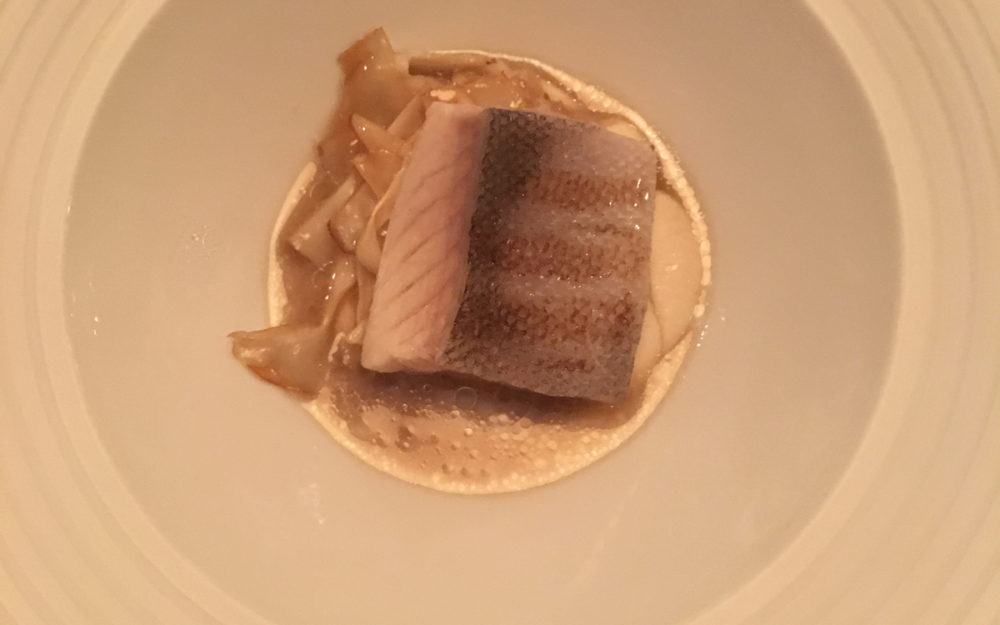 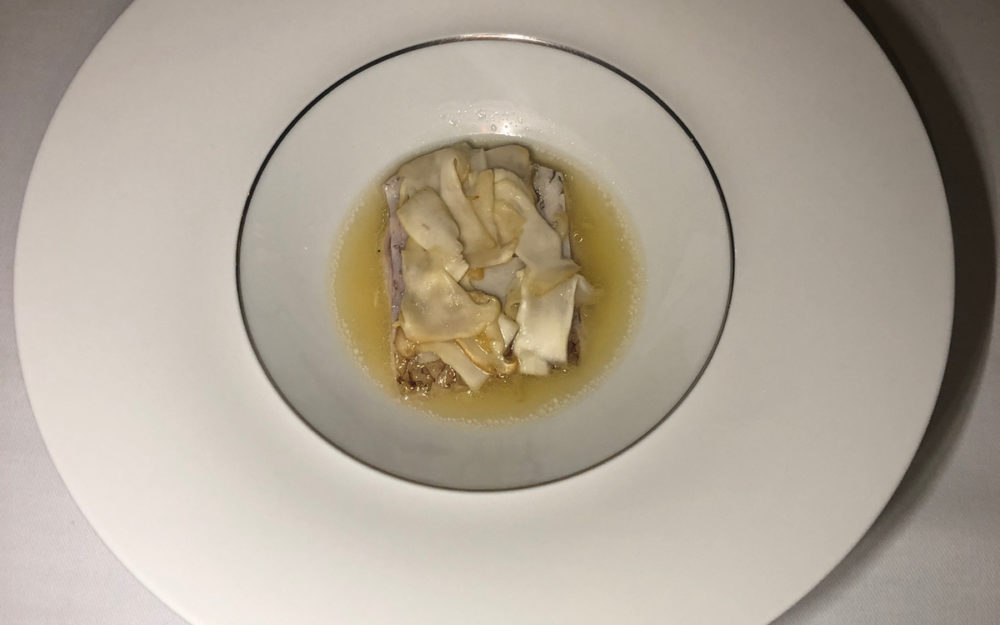 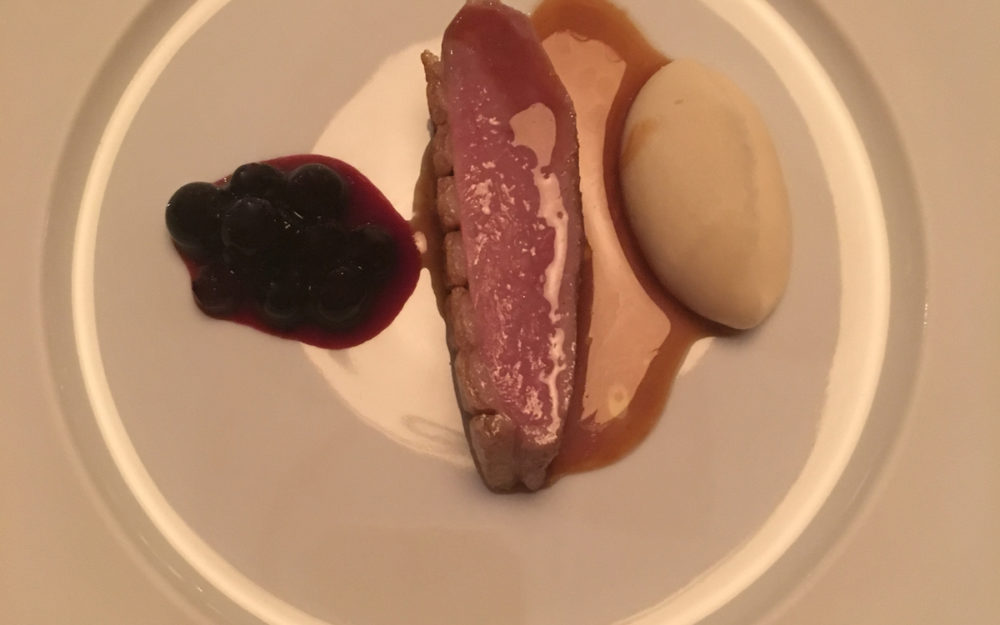 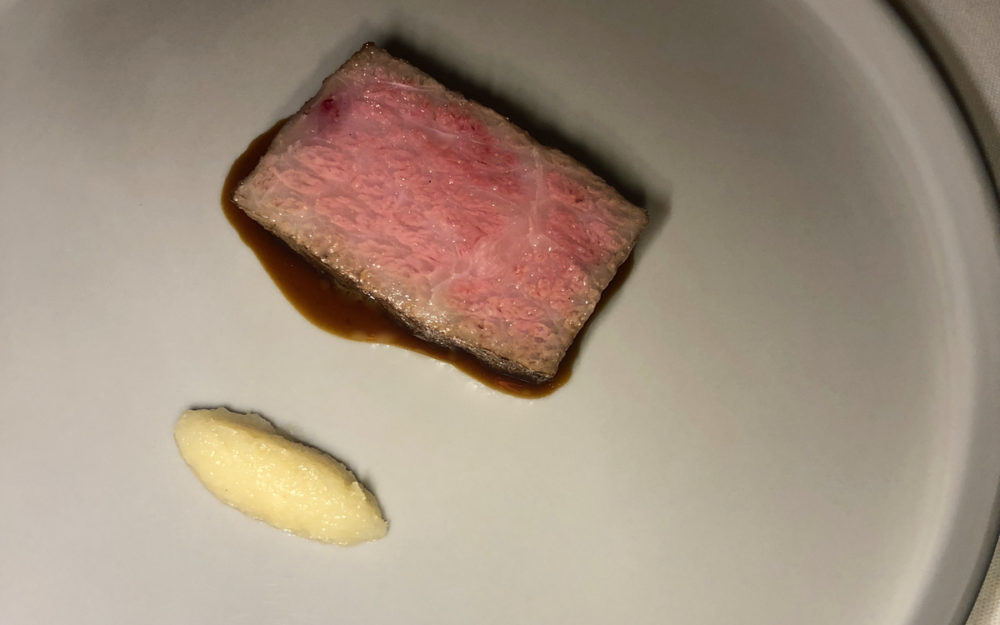 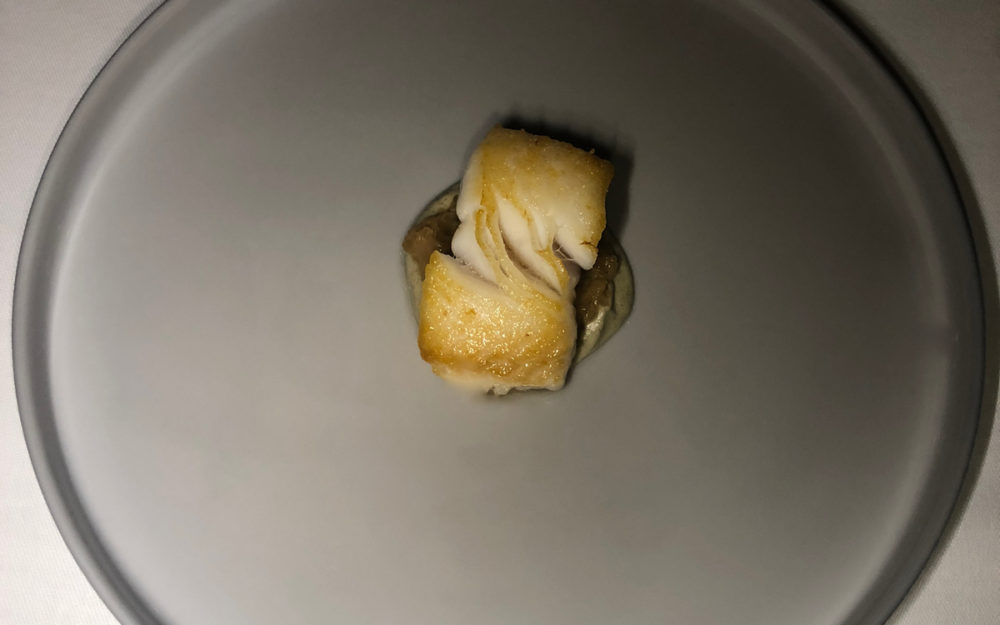 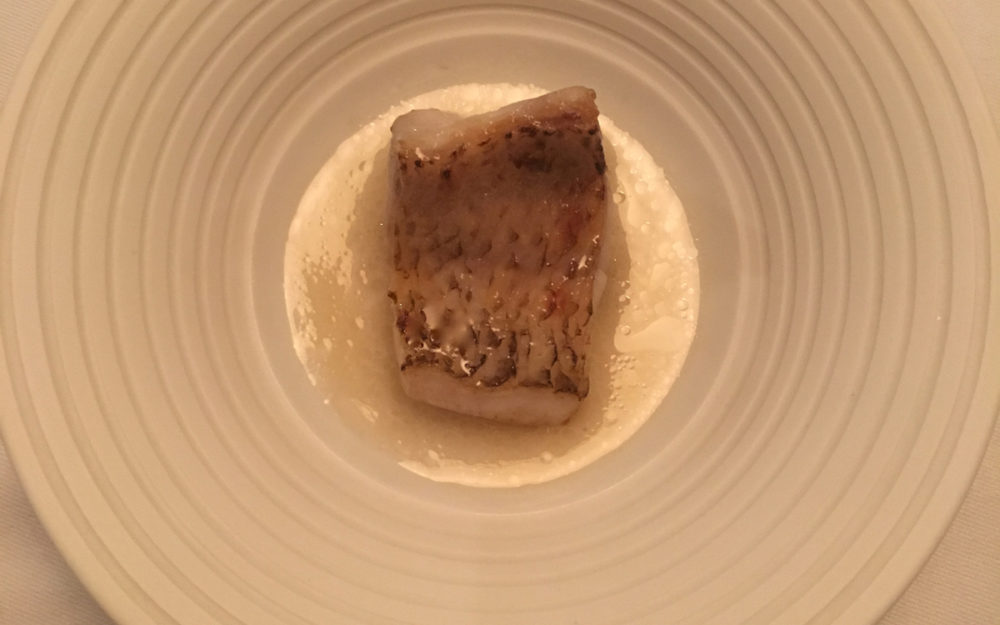 The Chef’s Table at Brooklyn Fare is the exemplary embodiment of the #foodporn tag on social media. The orchids decorating the tables, caviar, sea urchin, even the langoustine plating, all resemble human reproductive organs. Galloping along the frantic pace of New Yorkers, the entire meal is faster than at most three star establishments. Over just two-hours the meal is over. Two seatings, first at 5 pm. Our 7:30 booth for four diners was the last layover wiping the plates at 10:30pm. The counter seats face the open kitchen, and additional low chair tables are less discrete than the two booths.

Chef Ramirez was the right hand at David Bouley for eight years, where the food is strongly influenced by Japanese cuisine. Then he went to Osaka in Japan to exchange culinary ideas. He came back creating a rich, simple, yet high-profile ingredients listing tasting menu. The presentation is not Instagram-friendly, but orgasmic on the foodie terms. High in cholesterol (seafood and red meat), vegetables barely feature on the overwhelmingly in Asia-sourced menu (up to 90 percent in some seasons).

Starting with ovations, the signature Tartlet of saba (Japanese mackerel) was at both meals my favourite bite. It’s oily quality is balanced with a sour flesh of a lemon segment – extraordinary!

Uni lovers rejoice, the Hokkaido sea urchins nesting on a two-bite brioche (a little carb insert) topped with marinated Australian black truffle are insanely decadent. This is a Sex in the City dish. Yet, as we are getting extras for our missing companions the second time we dine here, we learned that one is enough. Too much of the super-charged mouth filler.

A Grilled wild trout (Pennsylvania) served with its skin in an oily dressing freshened by enough of grated ginger was nice. 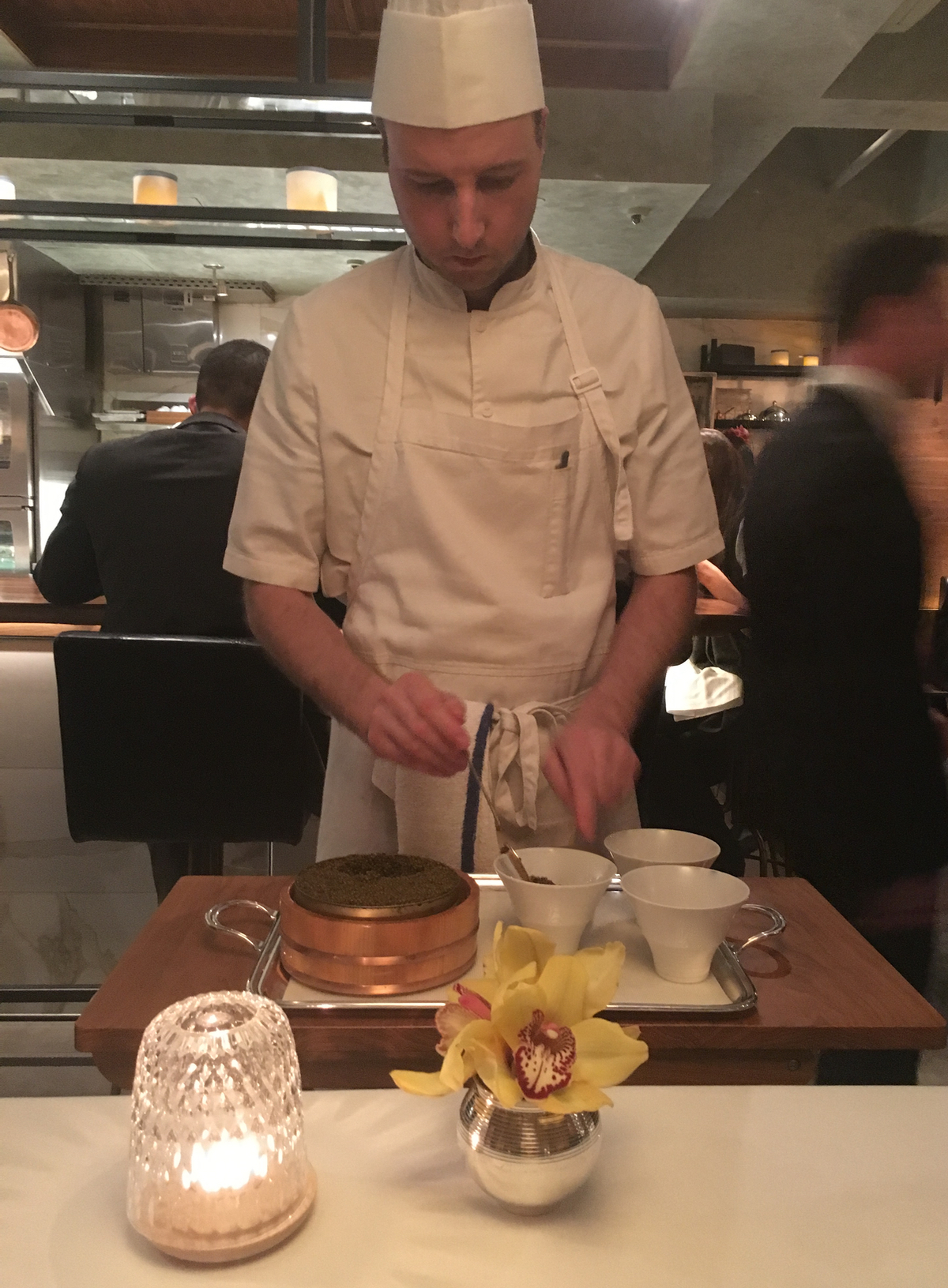 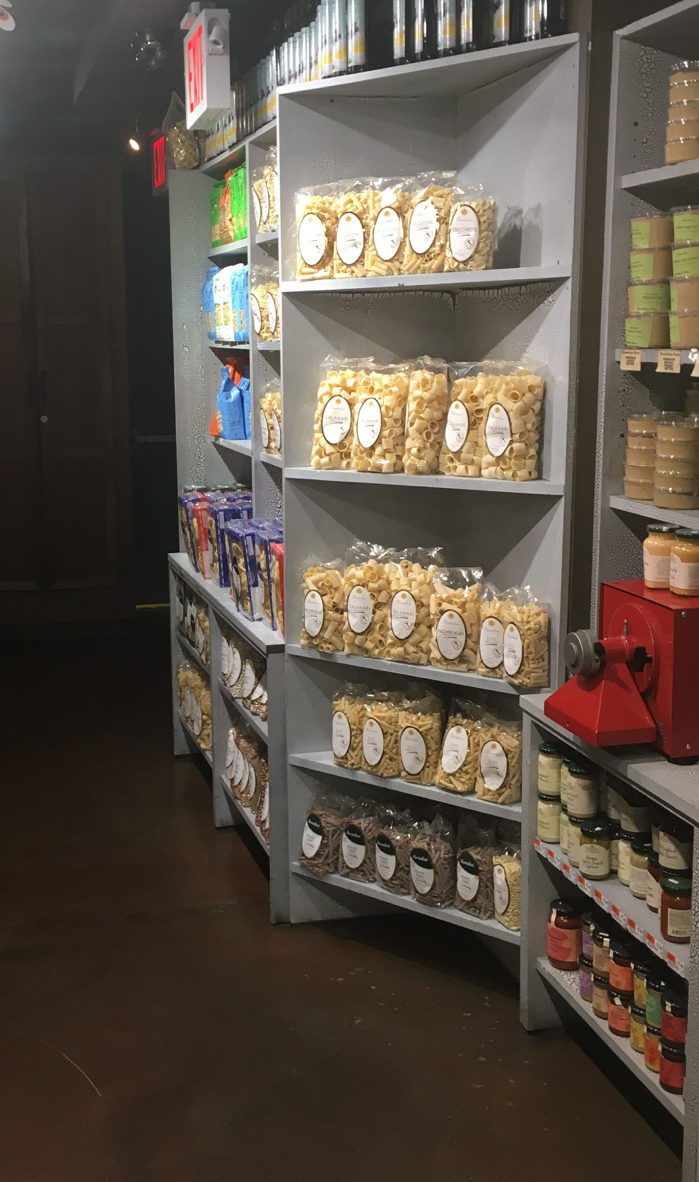 Now some show. The server brought a giant box of Kaluga Queen Caviar. Spooning out the farm raised cross of female kaluga with amur sturgeon, the Chinese roe topped a bowl of crab, sansho puree in a wine-based creamy sauce so rich that a pumpernickel bread would make it more palatable for me. Our palate and my stomach started to crave some carbs or neutralising flavours.

An egg custard with foie gras chunks and diced black truffles where acidity and fat again mingled made me hallucinate. I need bread! Sardinian pane-crassau or light crackers at least could be served on the table, I dreamt, or rice please!

The superb Scottish langoustine with root puree (reminded me of Toyo in Paris), blood orange segments and foam (a cliché late in 2018) distracted me more a year before as a morsel of Koshihikari rice was served with it. Stonington Maine Lobster steps in when available and in season.

A Japanese fish chosen according to the season. Agamutsu – red sea perch from the Chiba prefecture in fall. Topped with sliced Matsutake mushrooms, the dish was delicate as in Japan, but in a more salty broth for the American seasoned palates.

Two meat courses continue the paleo gourmet feast. A very fatty, chewy local duck from John Fasio farm Upstate with roasted brussels sprouts, chanterelle mushroom and cabbage confit creamy purée in 2019, while celery root provided a bite-size vegetable fix in fall 2018. The wagyu-like rich duck was not to either of our trio’s liking. On Manhattan, we much prefer the duck served at Momofuku ko and Cosme.

Next, the real thing – the Japanese wagyu beef from Miyazaki Japan, horseradish purée. I much prefer a top yakiniku as well as Kanda’s more meaty and juicy cuts of beef in Japan. At our second meal at Chef’s Table at Brooklyn Fare, a crisp yet smooth Black Cod with smoked eggplant purée added a mini taste of vegetables into our menu. I prefered the previous version with Oregon Matsutake mushrooms. 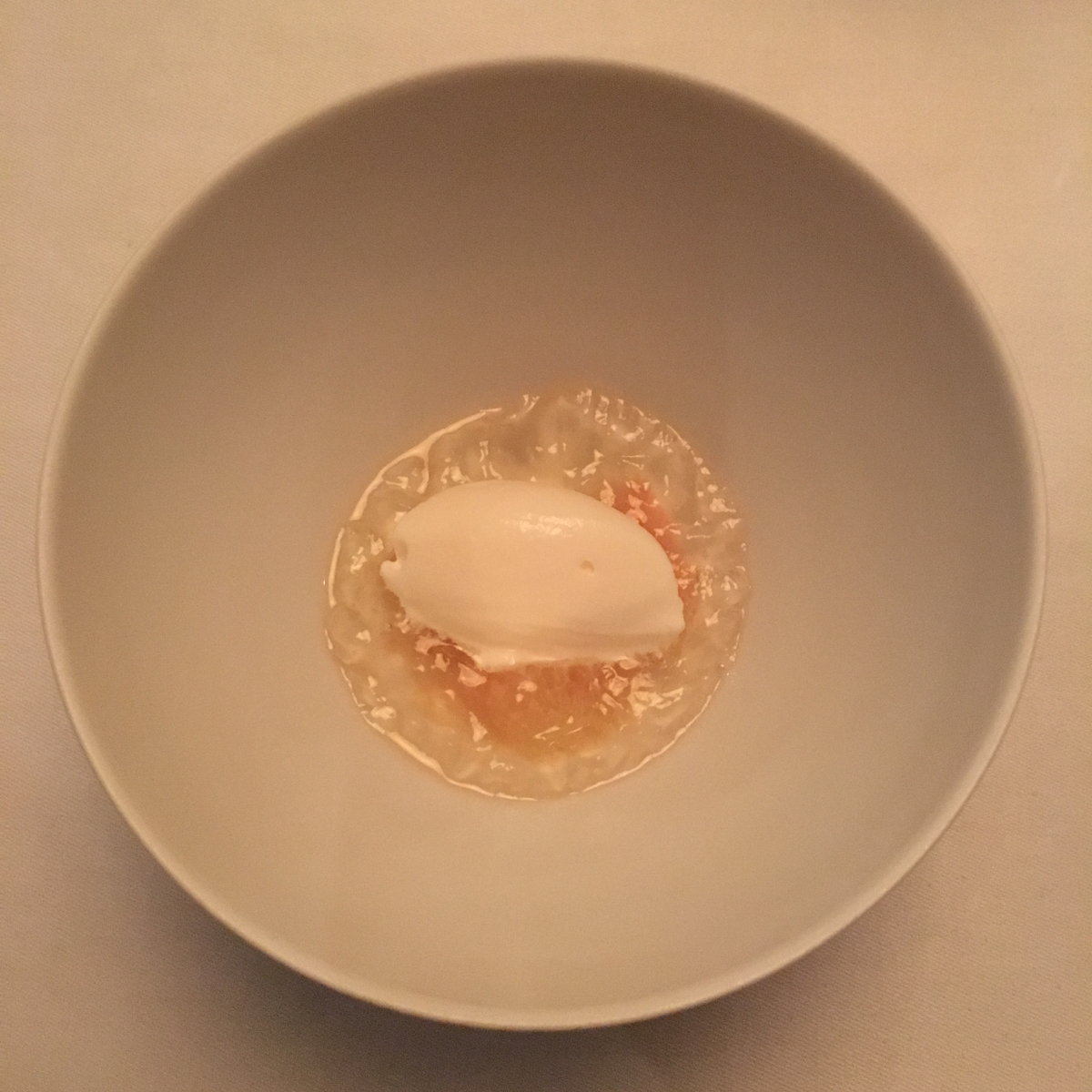 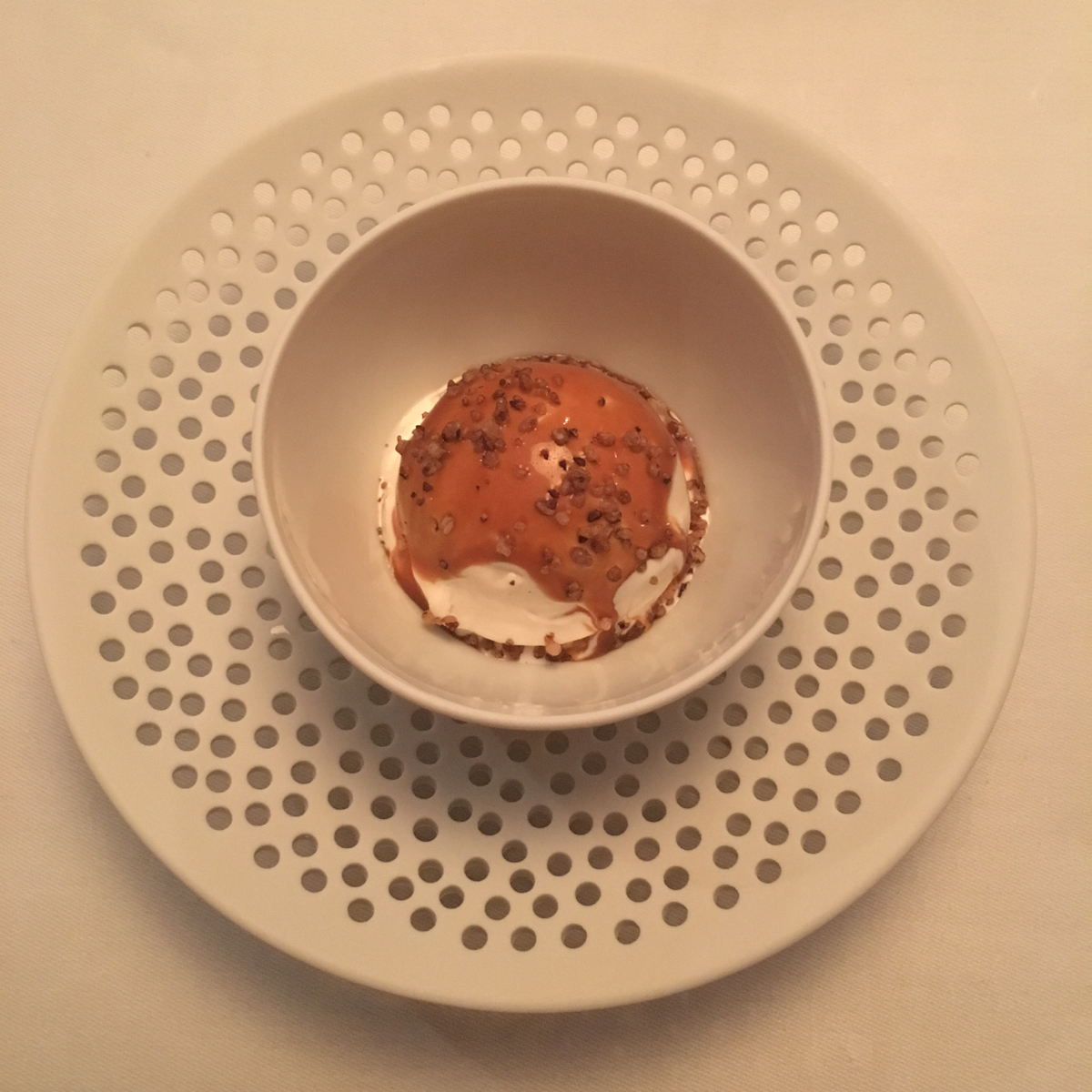 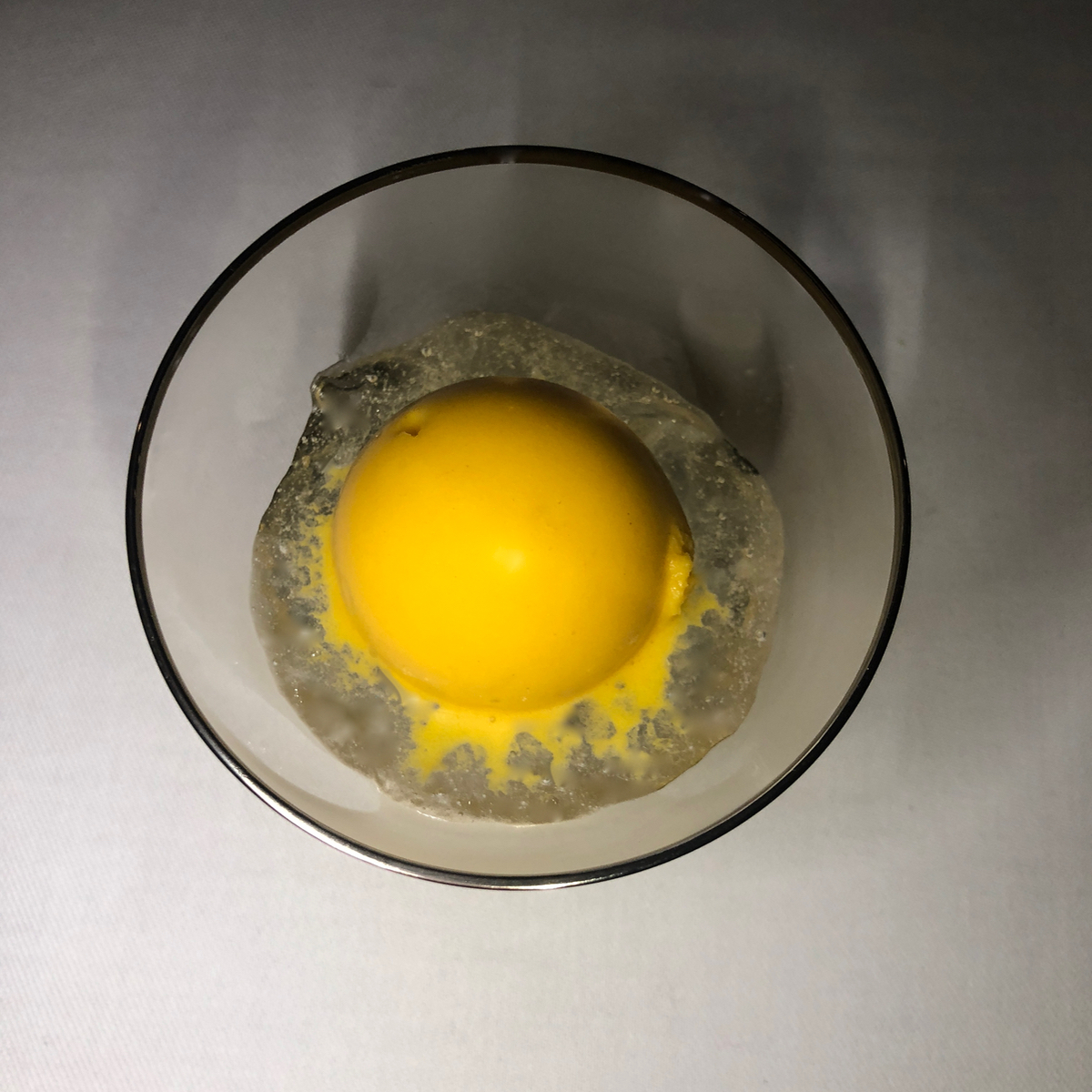 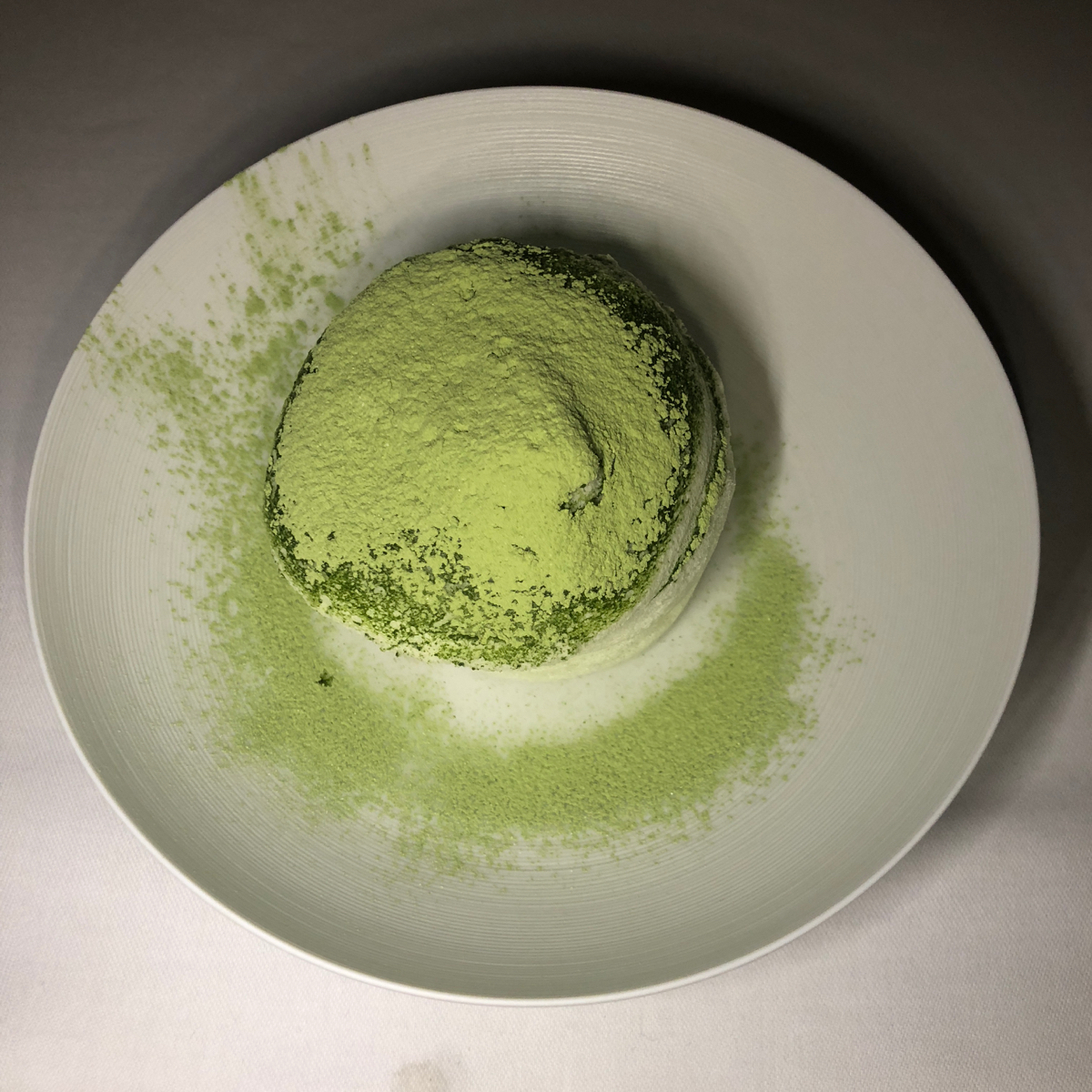 Chef Ramirez decides all proposals from the team for the deserts. In the mildly sweet finish of communal creativity a palate-refreshing (much needed) pre-desert of Sea buckthorn ice cream and Komekome sake jelly was superb. Another time Pink Grapefruit with Sake Gelée freshened it up as did another ice-cold treat of Sobacha (roasted buckwheat) Sorbet. The main dessert of Bichontan charcoal burlet pear with pure milk ice cream was not sweet and the sour caramel sauce was interesting.

For the final desert blast a frozen milk Matcha souflé (no eggs) like Japanese shaved ice with powdered matcha all over revealed a three star surprise of salted crisp white chocolate balls hidden inside. A light ‘Japanophobia’ that I loved. Previously my final tea accompanied a soft Chocolate Custard. 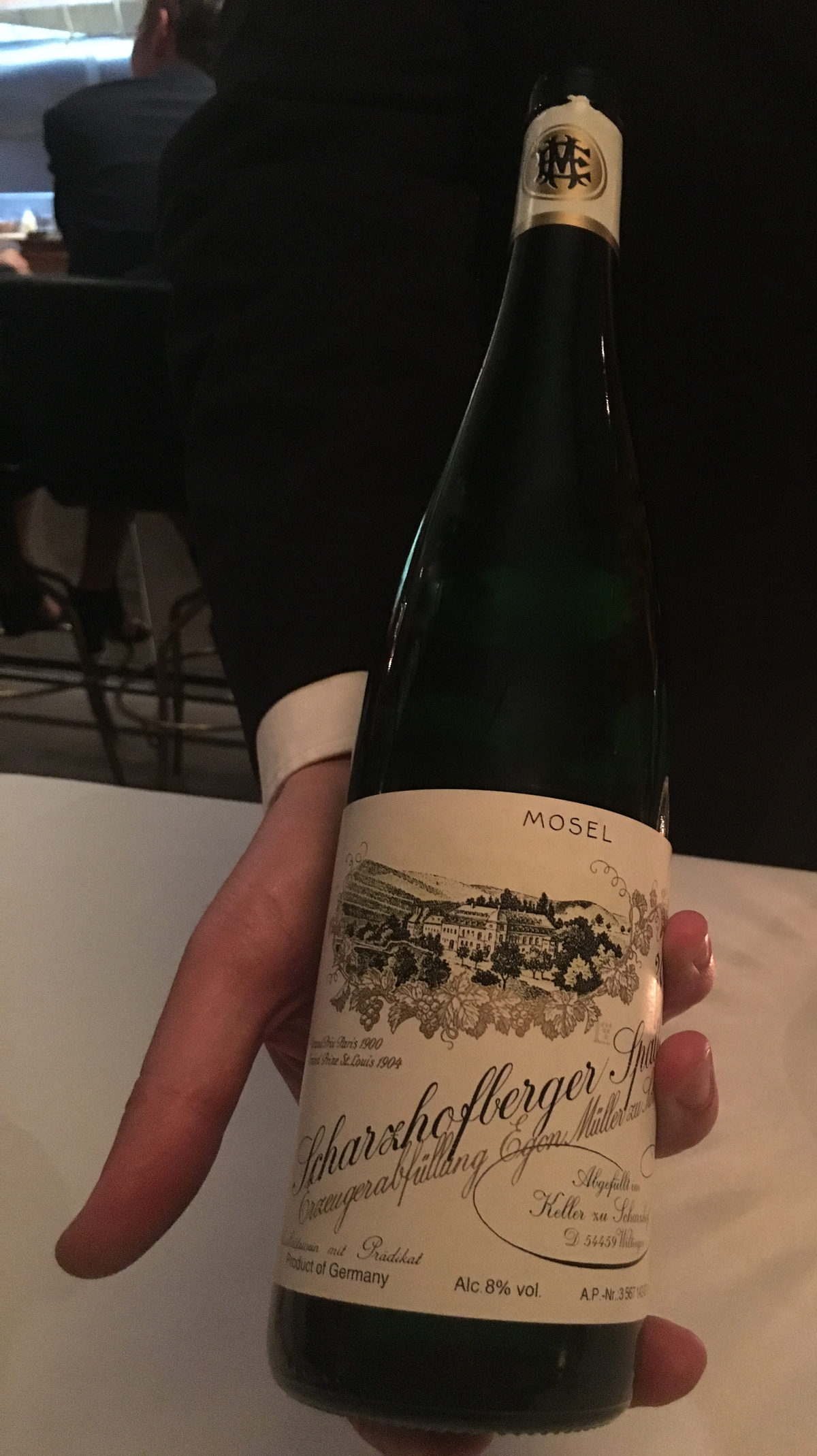 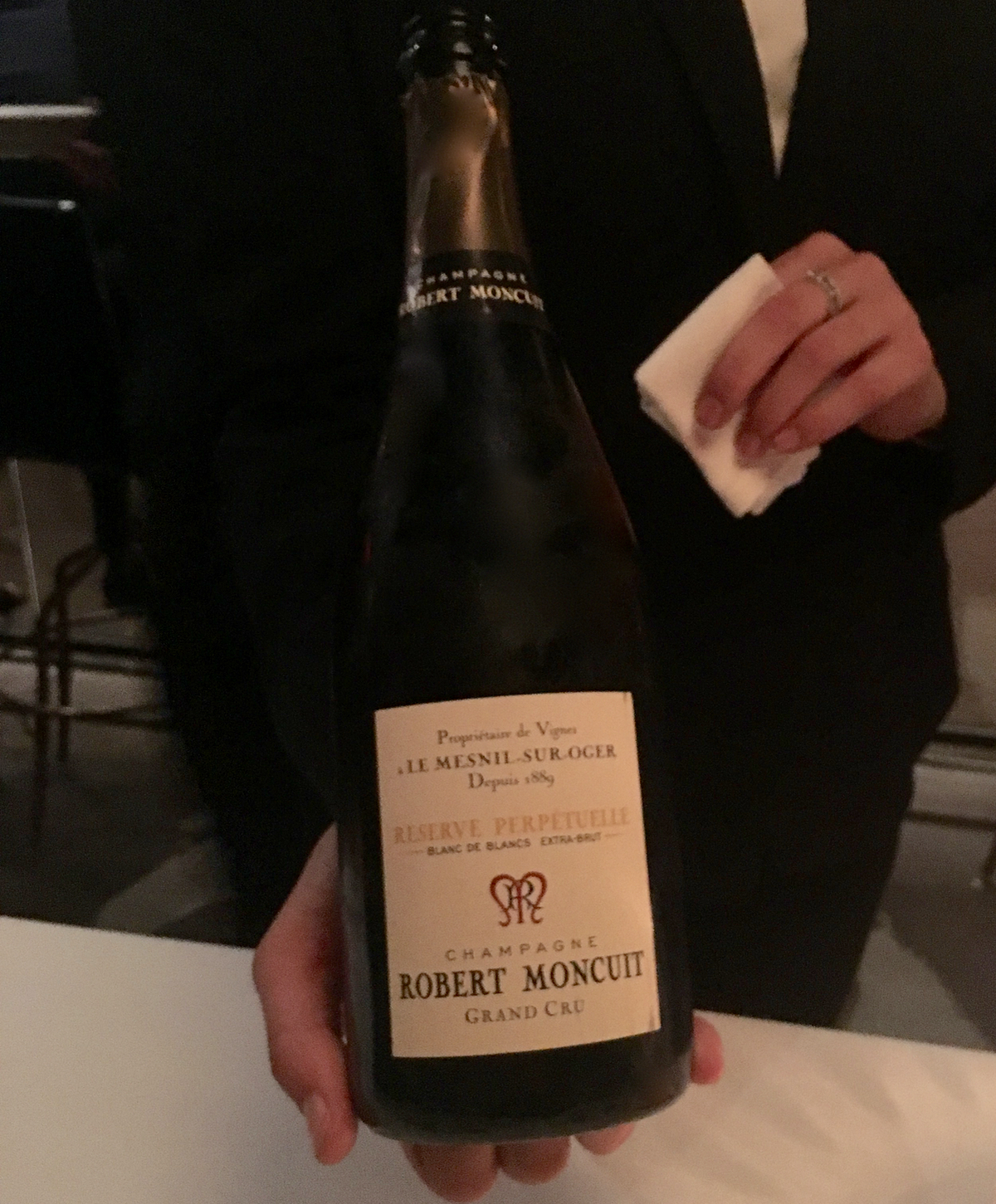 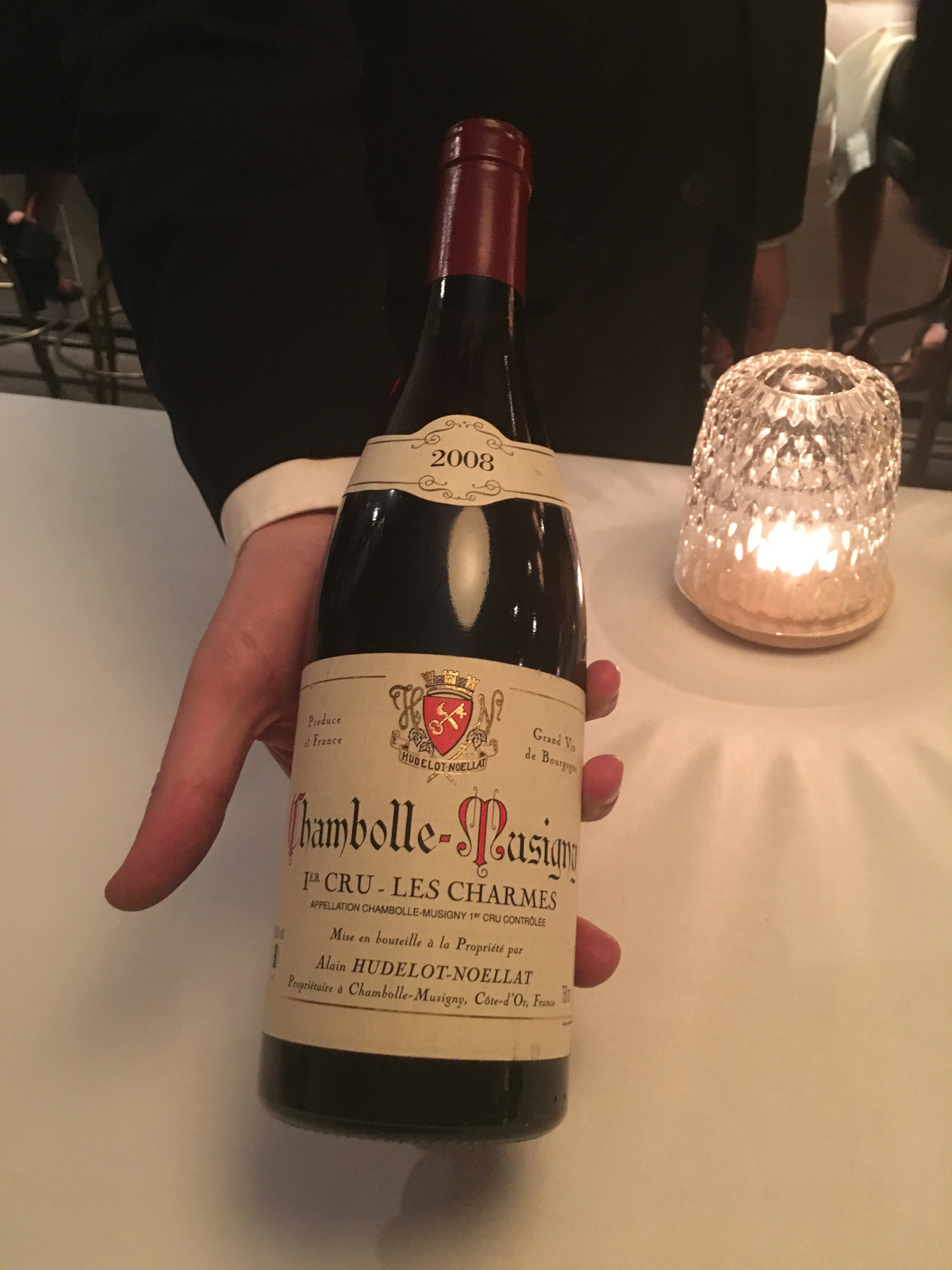 Tipples at the Chef’s Table at Brooklyn Fare

To start, a $35 glass of blanc de blancs Grand Cru (Mesnil sur Oger) champagne by Robert Moncuit impressed with its complex and characteristic chalky intensity. Partially (about 30%) aged in oak, the floral and citrus tones of the Chardonnay were preserved. The wine list was successfully curated to the current tastes. A grower champagne out-rules the commercial giants by the glass, off the beaten path producers balance the big names. A rare nod from a seasoned wine drinker lie myself, the cellar at the Brooklyn Fare excites me as much as the Playboy magazine turns on teenage boys. The sommelier (former of Momofuku ko) knows his game so perfectly that he balances trends with the essence.

Natural wines could not escape his attention. Tschida’s Austrian rose, a red Cornas by Auguste Clape, the pioneer of  bottling his own estate wines in Northern Rhone’s Cornas. A great selection of Japanese sake reflect the eastern inspiration (a carafe of dry – Junmai Daiginjo – Daishiki Minowamon worked with the seafood well). Most sommeliers today have a penchant for Mosel, so the recommended white German bottle of Scharzhofberger Riesling landed on our table. The late-harvest off-dry 2009 Spätlese from the slopes of the Mosel river is usually not our first pick as dry wines are more tuned to our palates. Made by the legendary bull-headed Egon Muller, it was drinkable, but the $613 + tax tag stung. Balancing the sheets at the next meal, the decade old Gevrey Chambertin (Premier Cru of the astute Les Charmes site) by Hudelot—Noellat was a masculine affair with a smokey nose, forest needles, hummus and ‘ooh nature calls’ horse shit perfect Burgundy. 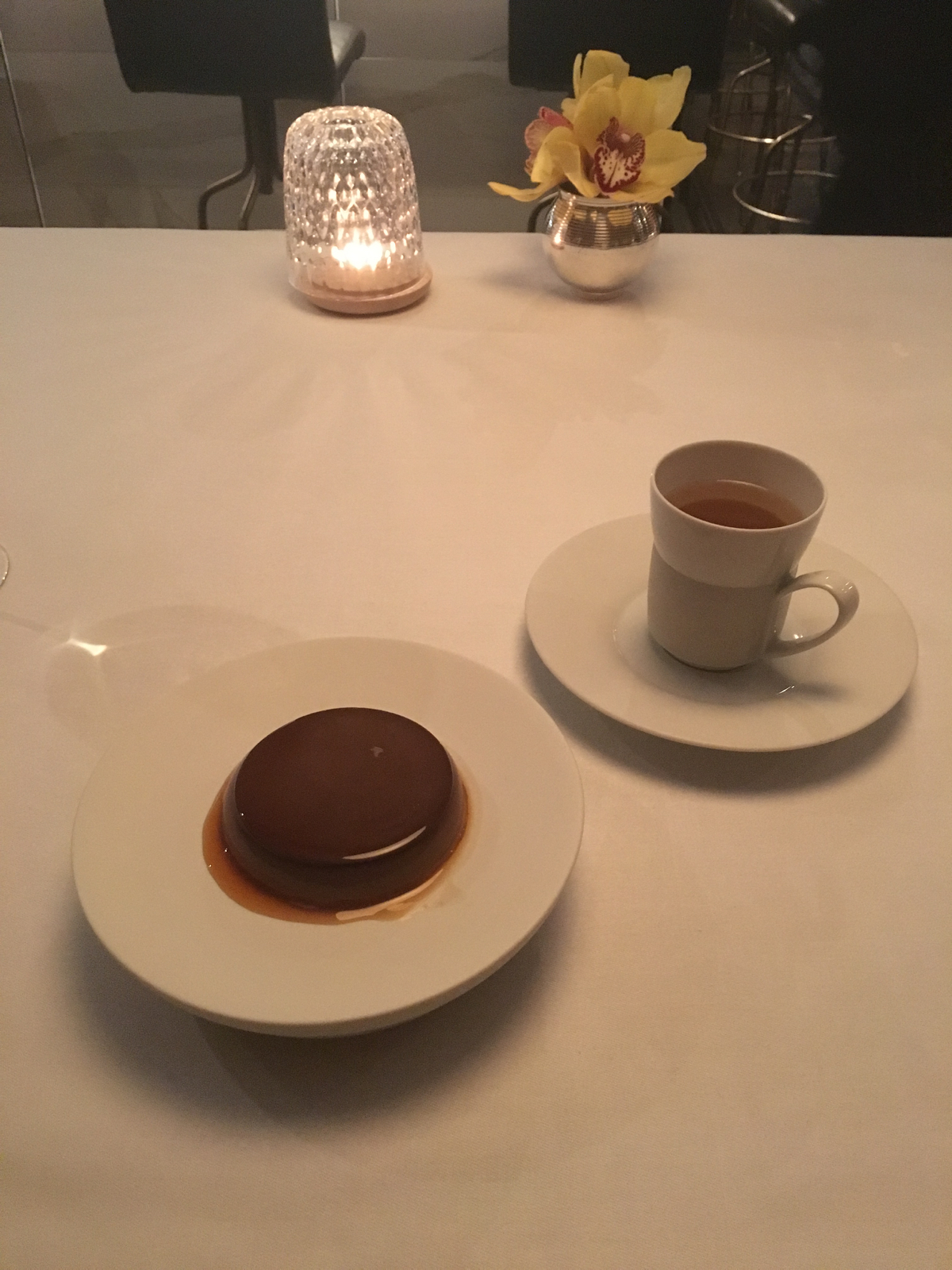 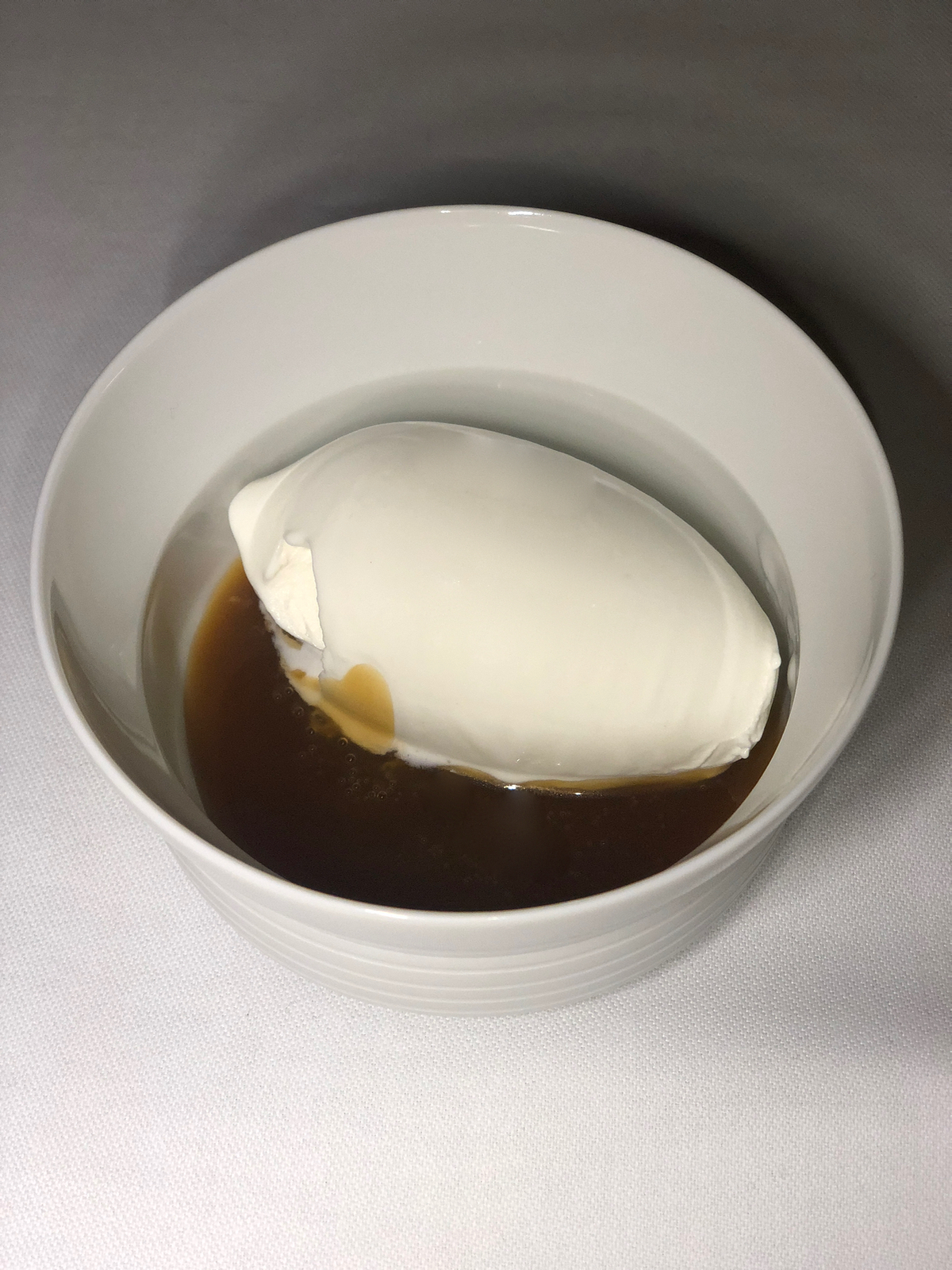 We much prefer to dine at Momofuku ko Downtown or the Single Thread in California since the tasting menu is much more exciting and complete.

The reservations are very specific so check their website for details. A warning, $200 per person is non-refundable upon reservation, so show up!

Two Tuesday-Saturday dinner seatings only at 5 and 7:30pm