In three restaurant concepts under one roof, the chef's team uplifts and preserves the bounty of the Engadine and its surrounding lakes, mountains, pastures and valleys.

Mindful eaters with integrity applaud to the transparent channels of locally sourced food at Stüvas at Chesa Rosatsch in Celerina. Open only for dinner, the Slow Food labeled restaurant highlights producers from within the Grisons canton, but also the best from all Switzerland (like the “pope of Swiss cheese”, sustainable farmers, butchers, and growers) and, minutes away just across the border from Italy. Cooked delicious, the meal inside the hand-painted Engadine house is a must when you are luxuriating in St Moritz. For there is nothing of its kind in the caviar, seafood and foie gras taunting resort. 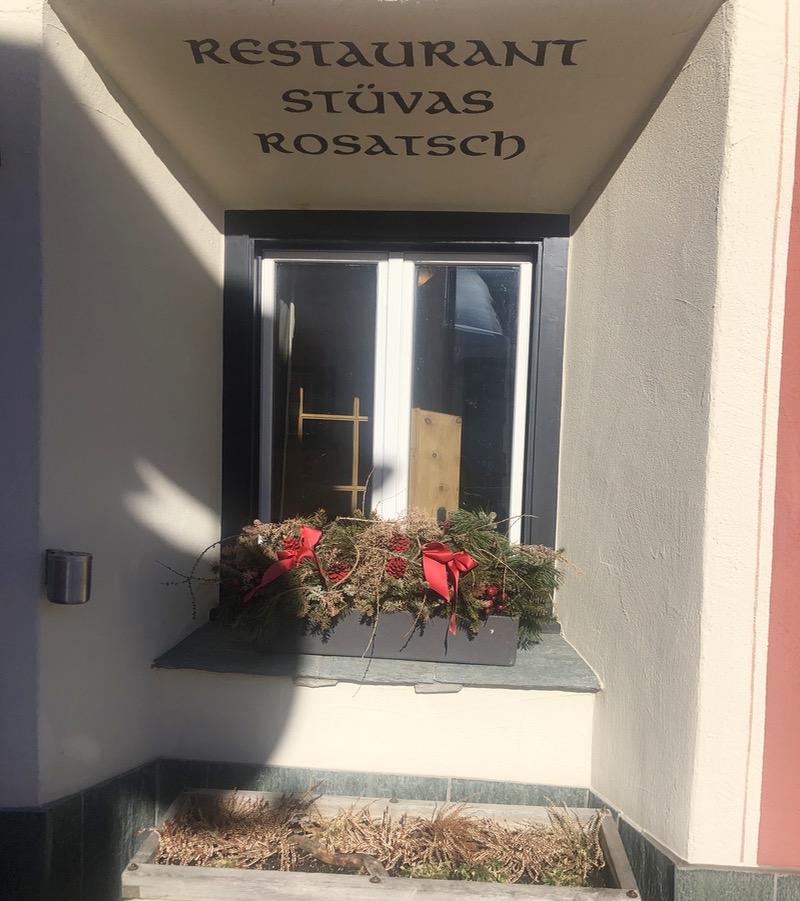 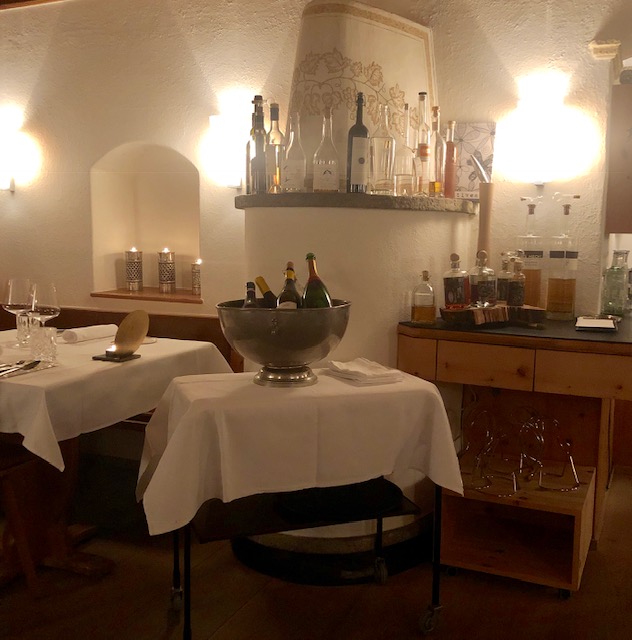 Food with its story told in full length at Stüvas

Every product served in the Stüvas’ cosy Swiss-pine-clad rooms has its own story to tell, even the pottery from Verena Jordan-Cullati in Guarda. Chesa Rosatsch is not just a cosy boutique Swiss hotel, its gourmet diversity is directed by chef Jan Gasser. In three restaurant concepts under one roof, his team uplifts and preserves the bounty of the Engadine and its surrounding lakes, mountains, pastures and valleys (Grisons and Ticino of Switzerland or nearby Valtellina in Italy). Preserved raspberries and quinces are used in desserts, while homemade orange jam accompanies the cheese plate.
Artisan producers provide the antibiotic, pesticide and added hormone-free ingredients that after the summer and fall ripeness were preserved into the winter delicacies. Bottled and picked using traditional methods, berries pop up in desserts, vegetable chutneys and condiments accompany the savoury plates. A springy, fresh bread arrives with an assortment of grass-grazed butters, salt, and seasoned olive oil. Then an off-the-menu amouse-bouche, like the local salmon tartare with fried onion strips and mustard mayo we had, tunes you into the chef’s not so simple, but rather inventive culinary gait. 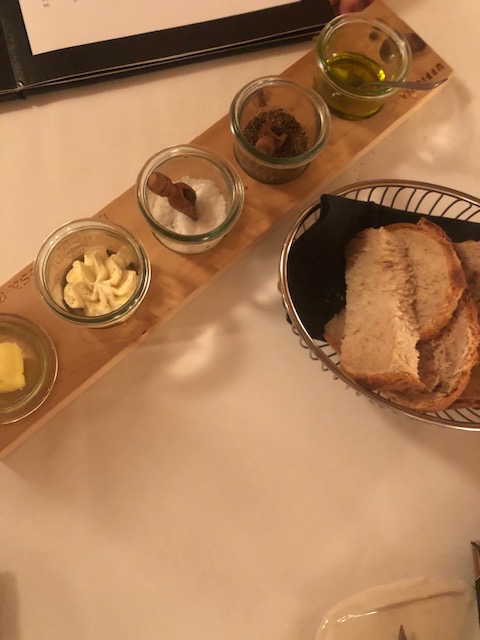 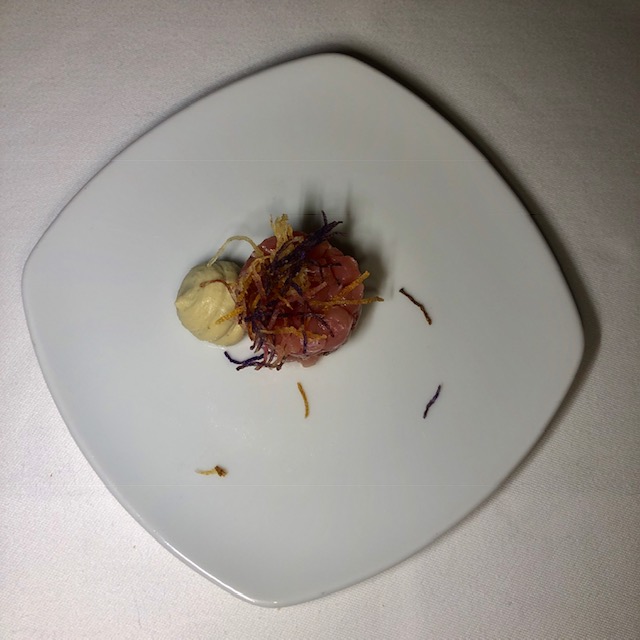 Dining at Stüvas is authentic yet contemporary in its plating and portion sizes. With an eye on the future of food, it’s practical having small or ‘normal’, larger plate option for most dishes. Mindful of the developed world’s food waste epidemic, you can better judge which servings you will be able to consume. Using the animal in its entirety goes naturally without explicitly stating it on the story telling format of the menu. My husband loved every morsel of the Duck from Mörschwil in three turns – braised, sautéed and in a leg roulade served with an orange-semolina strudel, parsnip, broccoli and the bird’s jus. 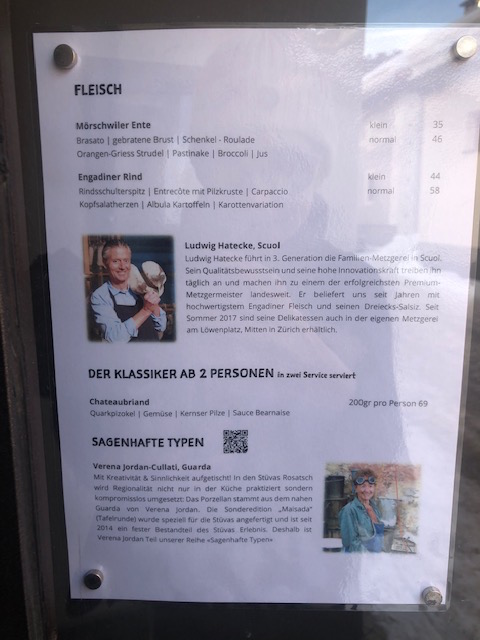 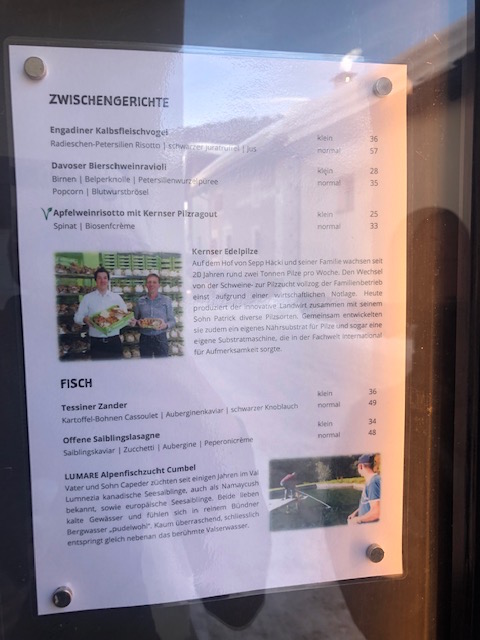 We also relished in reading about some of the producers. Having their photo and a gist of their purpose in print enlightened and like a feather chiselled our sustainably-minded attitude towards food. Still, there was plenty of animal protein, so including more plants would make it more ecologically sustainable. I asked for an extra side dish of winter vegetables and the warm bowl (add CHF 25) was so wonderful that I would suggest the chef including a seasonal vegetable starter permanently in the menu. Saffron at Stüvas grown and picked by Silvia Bosshard can highlight some of the potential, Buddhist monk-friendly plates.
The Salmon from Misox was of superb quality. A vegetable aspic on a toast, cheese crisp and a scoop of fruity ice-cream introduced sophistication of a Michelin star quality to the Lachs. Also in the starters, the smoked Albula trout from Cordo Simone bred in an own spring allows raising the fish without any antibiotics in Filisur in Grisons.
I enjoyed the smaller Applewine risotto with mushrooms from Kerns. Sepp Häcki and his family developed their own nutritive substrate for fungi and substrate machine that sustainably turns over two tons of mushrooms per week. they are world-famous in the fungi circles. Served with spinach, organic mustard cream, it was large enough for a main course if you have three to four plates as we usually do at restaurants. 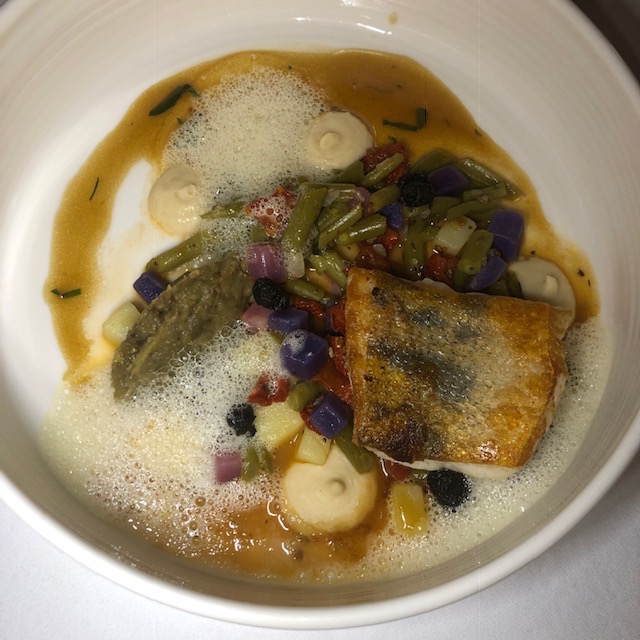 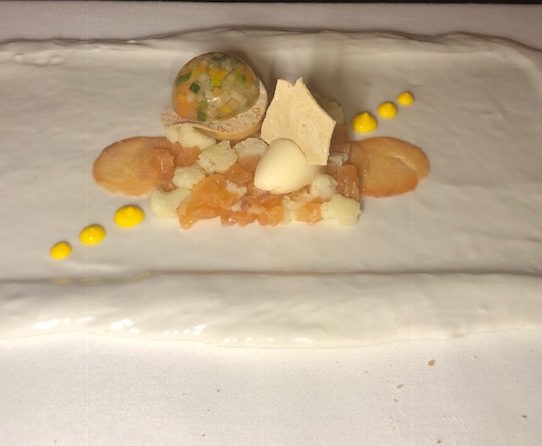 Swiss ingredients at their best

Next, my Pike-perch filet from Ticino was impeccably grilled with its skin on. The Tessiner Zander was plated with a Potato-beans cassoulet, an eggplant caviar and the now so popular fermented black garlic that is easier to digest.
The majority of the alpine-dried meat at Chesa Rosatsch comes from Hatecke, an elite butcher from nearby Scuol who now also has a store in Zurich. Beyond Stüvas taste his skills in a plate of Grison tapas or just get the triangular salzis at the Uondas Grill.
Being in the Alps yodels cheese, so keep your ears open at Stüvas since the options change regularly. Che Chaschöl goat cheese. Raw Swiss mountain cheese sourced from micro producers by Rolf Beeler, the local “cheese pope of Switzerland”. Jumi, set near the Emmental valley by Bern won the “Best Swiss Start-Up” at the Swiss Economic Forum in 2012. The Swiss founders Jürg Wyss and Mike Glauser come from a family of Swiss farmers and cheese makers. Make cheese with non-industrial methods expanded their business beyond Switzerland to London. 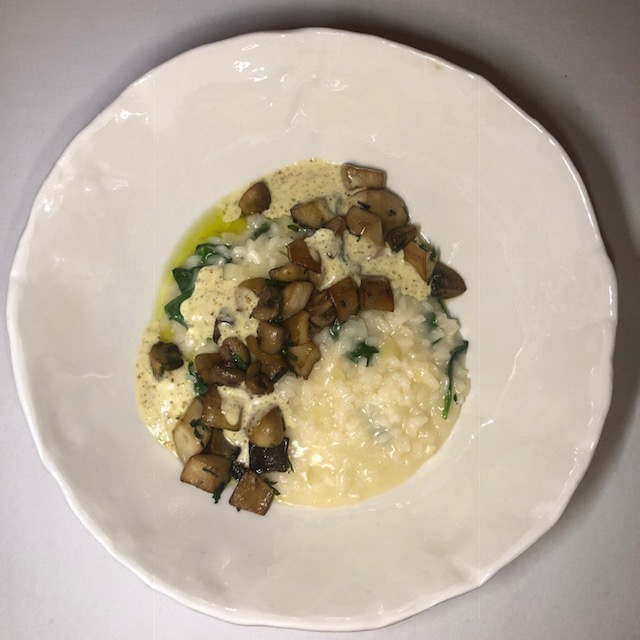 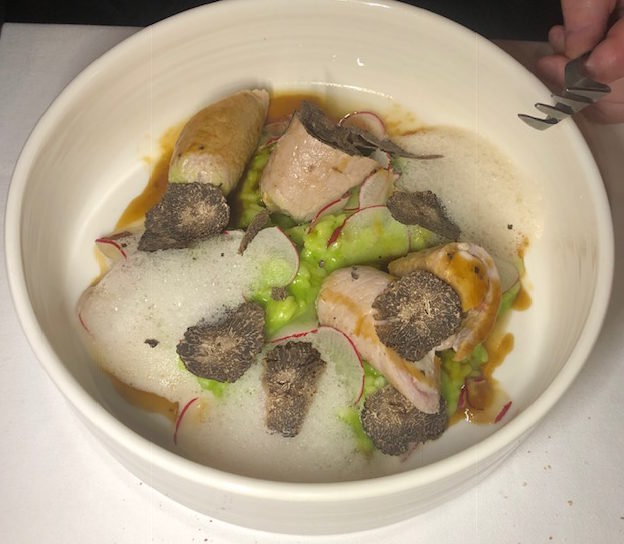 Check the Europe-centric wine list online. While DRC, top Bordeaux, French and Spanish icons star, we went for a Swiss red Pinot Noir «H» by Christian Hermann. Hermann joins Donatsch, Gantenbein, Irene Grünenfelder of Weingut Eichholz, Thomas Studach and Obrecht as the premium Swiss winemaker worth exploring. These bottles come at CHF 100-300 for some so not cheap, but better than an average Burgundy. Grappa and Marc – a spirit from grapes from various producers complete the alcoholic menu. Other beverages like their exclusive light lager brewed nearby in Pontresina, Swiss soft drink Rivella, apple and other juices from nearby orchards include the entire family in. Even if you do not order coffee or herbal tisane, small sweet petits fours land on the white table cloth to finish the superb meal at Stüvas in a gourmet tone. 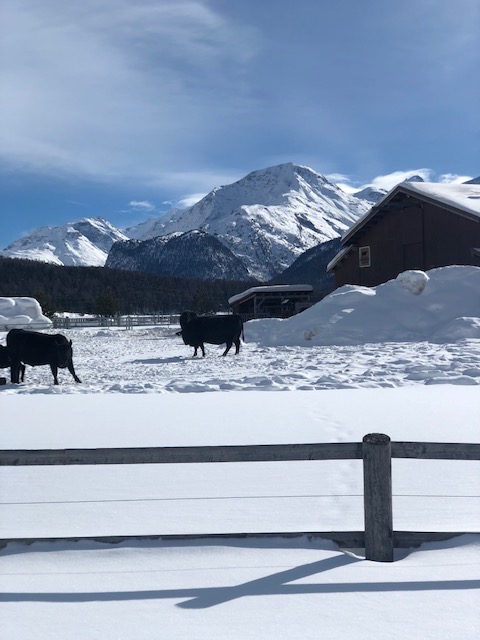 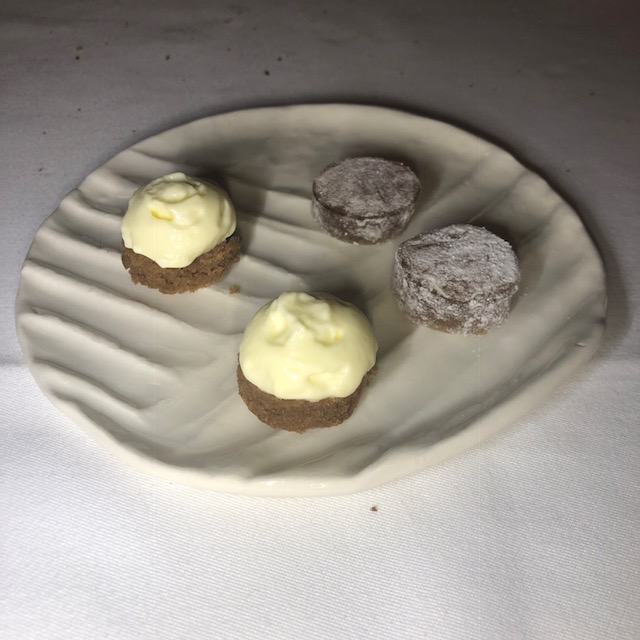 The most traditional Swiss dining at Chesa Rosatsch, Heimatli is another Swiss food concept by the same chef, and the only venue we have not tried yet. Meat fondue and other mountain specialities star the menu.
Swiss mountain food cannot get much better than this. I cannot name any other restaurant or food concept in Switzerland offering such a consistent pleasure and quality sourced as much locally as possible. We will be back, summer or winter, it is open for most of the year.
Stüvas  6:45 pm – 11 pm, Tuesday closed.