Spirituality fills the gap that materialism has widened over the past century. We are in the ravine of false connection, and we need to fill it with purpose.

The spiritual charms of Luang Prabang breathe out the air of authentic, focused, generous, innocent, kind, open and pure Buddhist attitude. Being, and not just Instagram-posting, in this UNESCO shrine of Laos swallows you into a tranquil stream of slow, content life. Beyond any blindly devoted ignorance of some other religious communities, here you feel welcome whatever your background may be.

The Lao people are as friendly as the Thais, with whom they once shared a kingdom and their official modern language is heavily influenced by the Thai language. The tiny town centre is dotted with stunning architecture and active, yet slow-paced street life. In December, there were not many tourists, so we could experience the local life unfiltered. Reminding me of my trip to Cambodia some 14 years ago, the difference being that nobody was actively trying to sell postcards on the streets in Luang Prabang. Social media have swallowed this nostalgic travel paperwork. 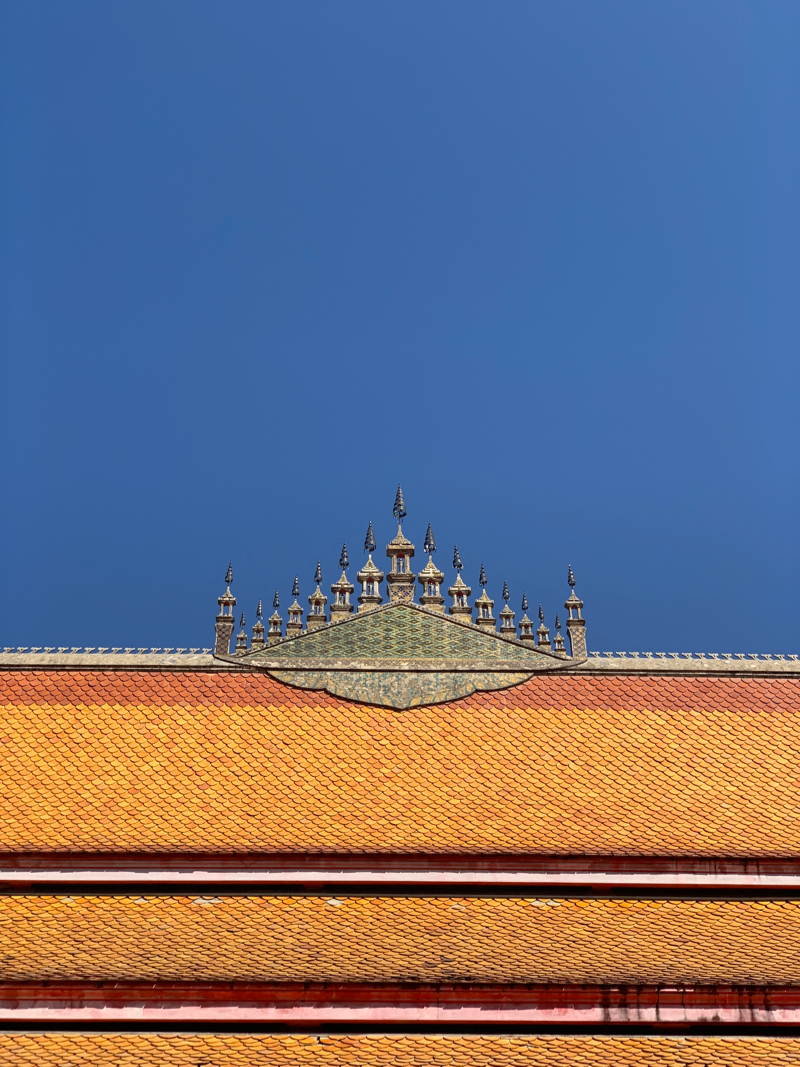 Reach the heaven of your mind in Luang Prabang

Luang Prabang is like a small island of Buddhist lifestyle. Encountering frequently the rusty saffron robed monks (bhikkhu in Pali, the ancient language of Buddha), one cannot escape pondering over their choice of simplicity. Their uttarasanga is a cross between an Indian sari and the ancient Roman toga, loose, yet wrapped according to precise rules. I thought, these happy monks do not need to worry about food, as the daily rice offering is a popular and promoted, early morning activity for visitors here. Enjoying their community, indeed a brotherhood, chanting, meditating and praying together in a temple adjoining their minimalist accommodation, seems like an ideal life to not only the poor Lao people, but to the stressed, lost or with work obsessed Westerners. No wonder, some emigrate and join the peaceful, contemplative life in a monastery (often, curiously, in Asia). Somehow us, the Westerners, are now more attracted to the Buddhist way of spirituality. Perhaps because it is more accessible, I wondered in my contemplation. The zenith of enlightenment in Buddhism is to be found inside oneself, not elsewhere. Intriguingly, the monastic ranks in Europe have dwindled. Abbeys across the old Christian continent are opening to the public as galleries, museums, artists and writers retreats or closing their gates facing dilapidation. 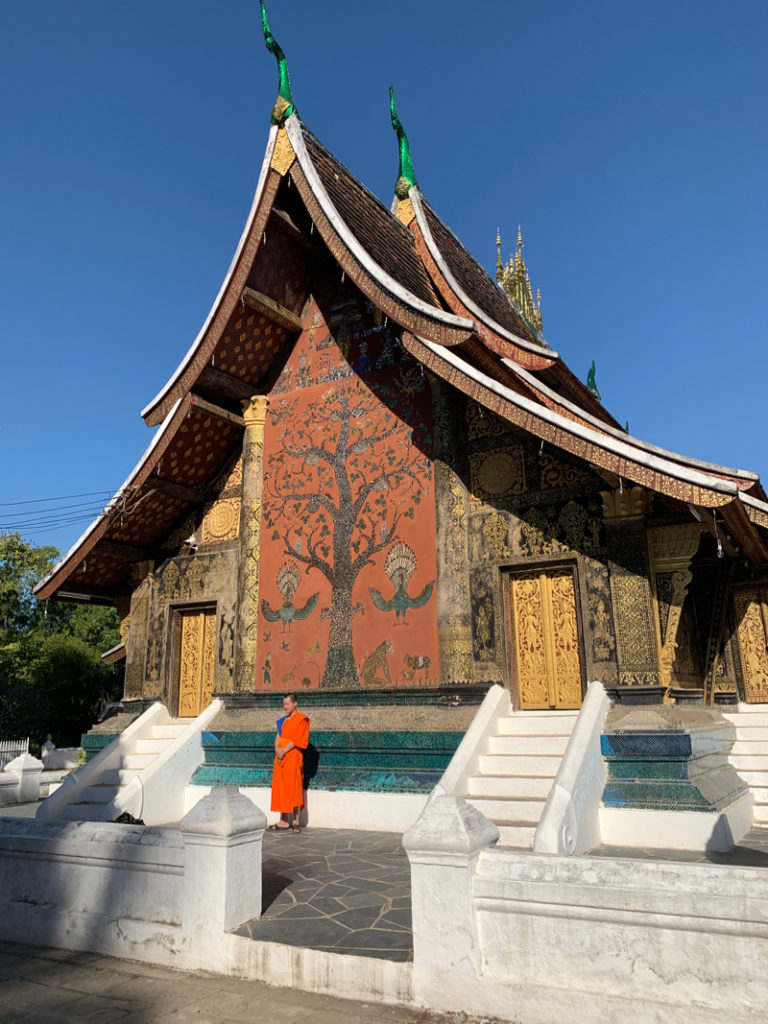 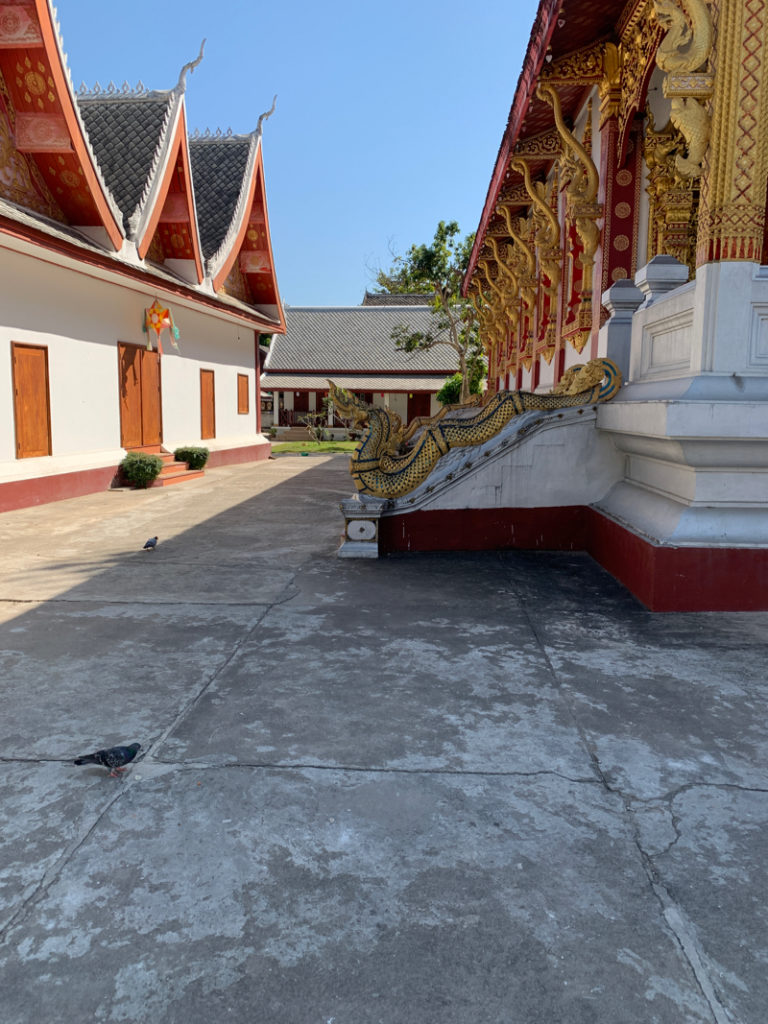 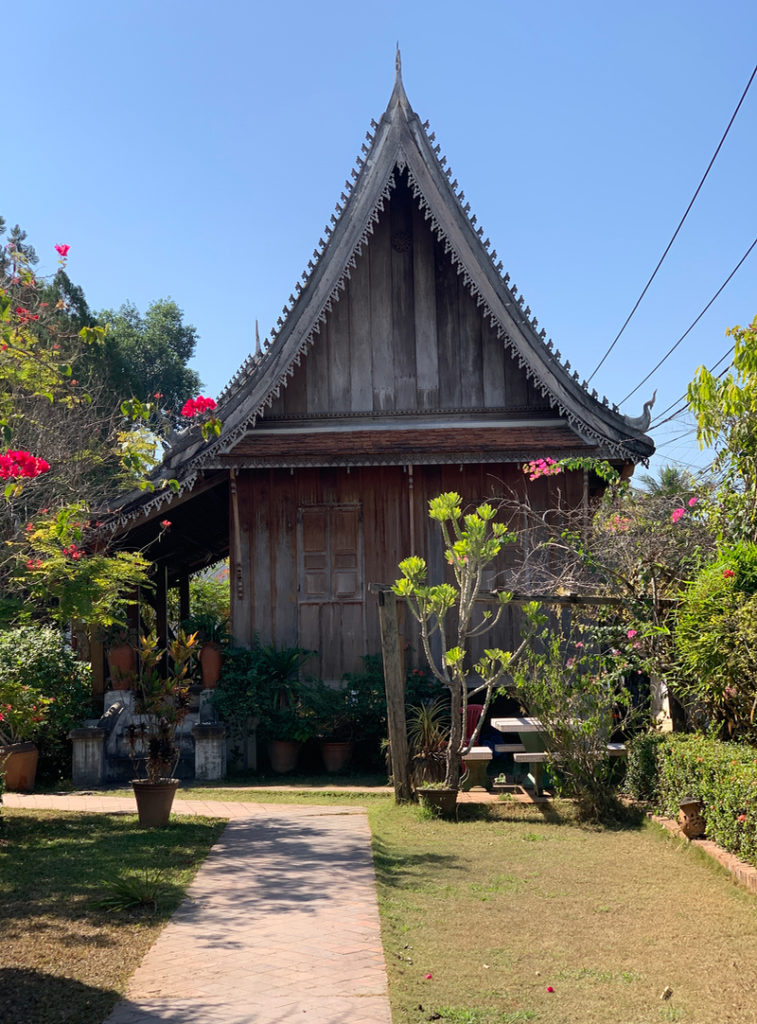 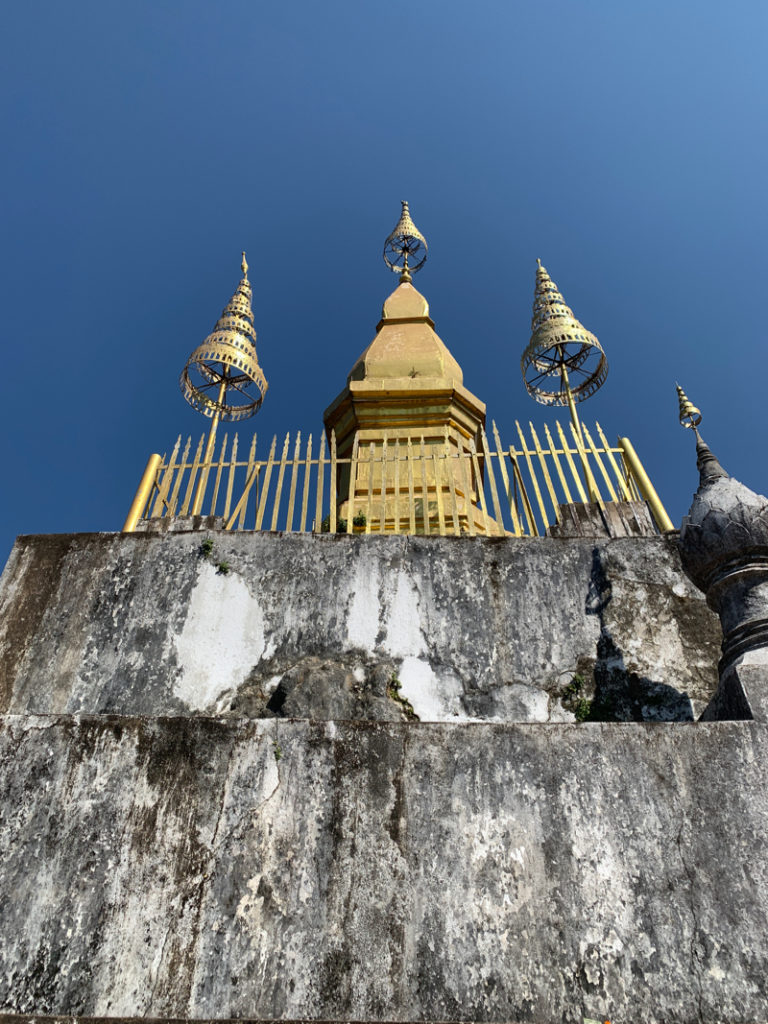 I have visited a few temples and monasteries around the world, but never felt as intimate as in that little spiritually-charged area in Luang Prabang. Always hungry for the real local experience, I walked through the suburban tails of the growing sleepy town. More, I hiked with a former monk. Climbing up the dry, cool, winter forests above the stunning Rosewood hotel, I nudged my smiling, yet reserved guide of me into a deep talk about happiness and purpose in life. He shared nothing new to me, yet he answered cleverly not just through his scripture-perfect paragraphs, he understood, and you could feel it. I grasped that while monks are simple, they are often very deep. Mindfulness is broadened awareness, our survival advantage. By accepting change, anything that happens will pass more smoothly. You know that any moment will pass, and that fighting only brings more pain, not salvation. A complex urban lifestyle brings about a complicated mind, that is why monasteries are secluded or start in small communities. Declutter your life.

Later that day I was to learn much more through a very special experience he facilitated. And you can, respectfully. too. 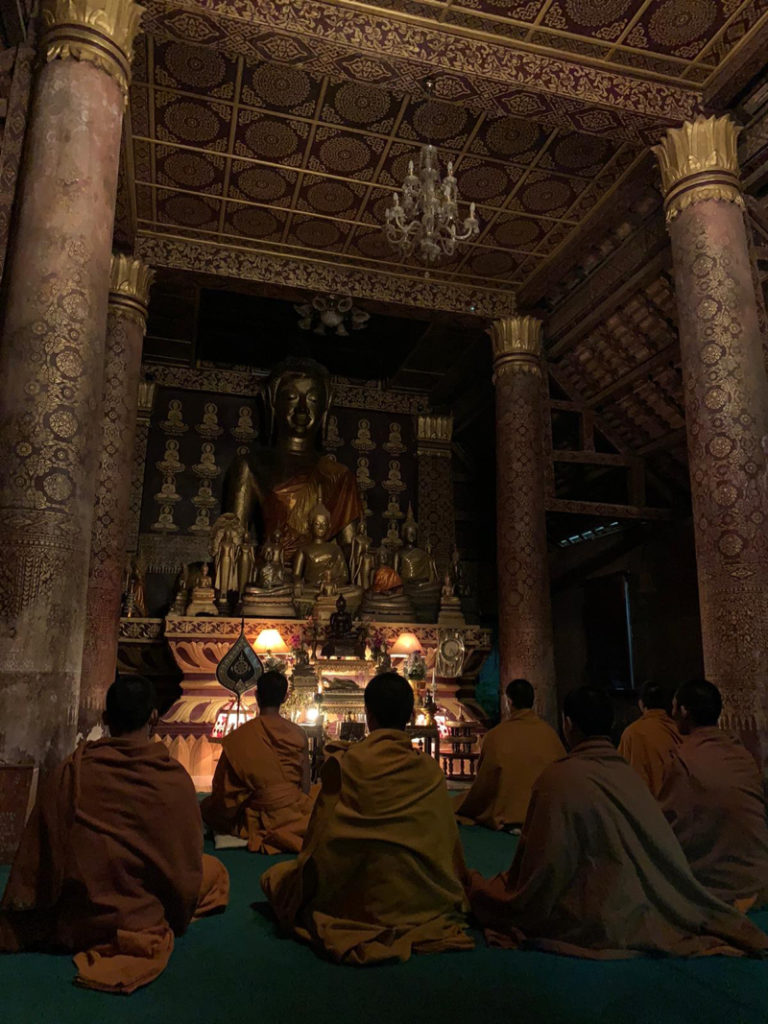 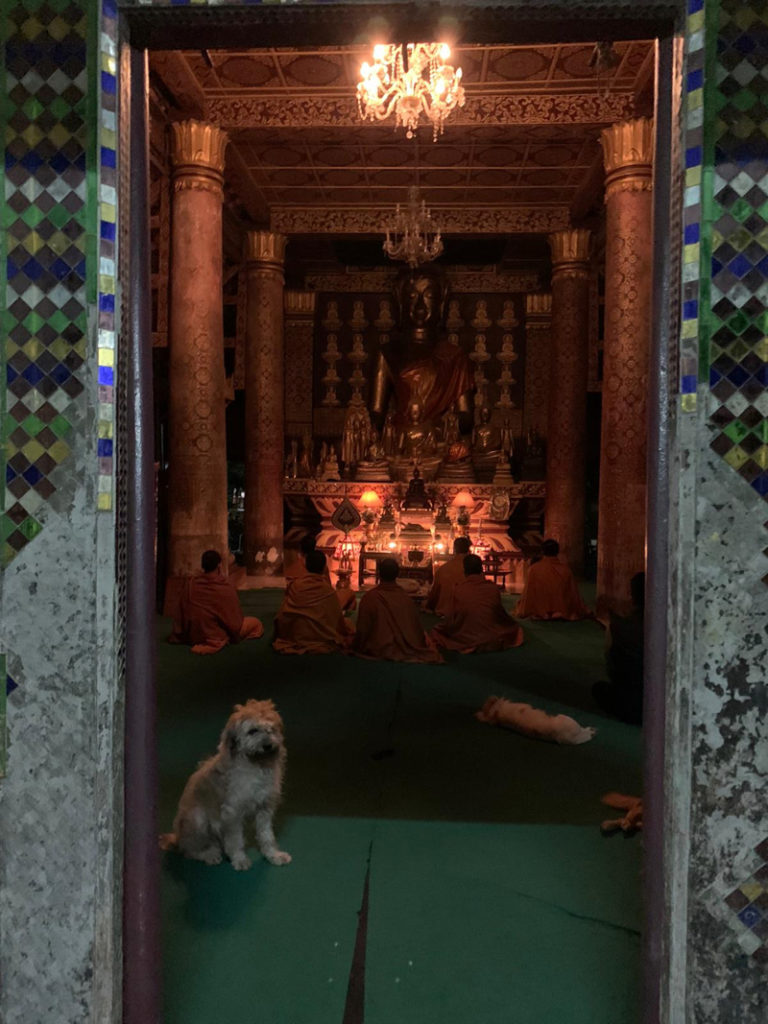 The candle-lit, village aura of the Wat Xieng Mouane where my guide invited me and my friend (a practicing Thai Buddhist herself), lacked the burdensome weight of other religions that collected negative karma in their violent past. Excuse my judgement, but I went through some trials and errors. Trying to contemplate life at a Christian cathedral, the grey aura of the crusades and the child abuse scandals by the priests block my connection. At a mosque, my femininity is intercepted by the illiberal Islam. Hindu temples are sculptural masterpieces, but too many Gods to worship is confusing (like India itself). Protestant churches feel too rational, distant from the right brain I am seeking to occupy. I am not a religious zealot, yet spirituality as for many of my contemporaries fills the gap that materialism has widened over the past century. We are in the ravine of false connection, and we need to fill it with purpose.

Gold-plated were the Buddha sculptures, reliefs of dancing Apsaras on temple doors and, naturally, the feeding grains for birds in cages sold as blessings and freeing the believers conscience off the emotional burdens of life. Only the poor were not robed in gold, yet they seemed content. 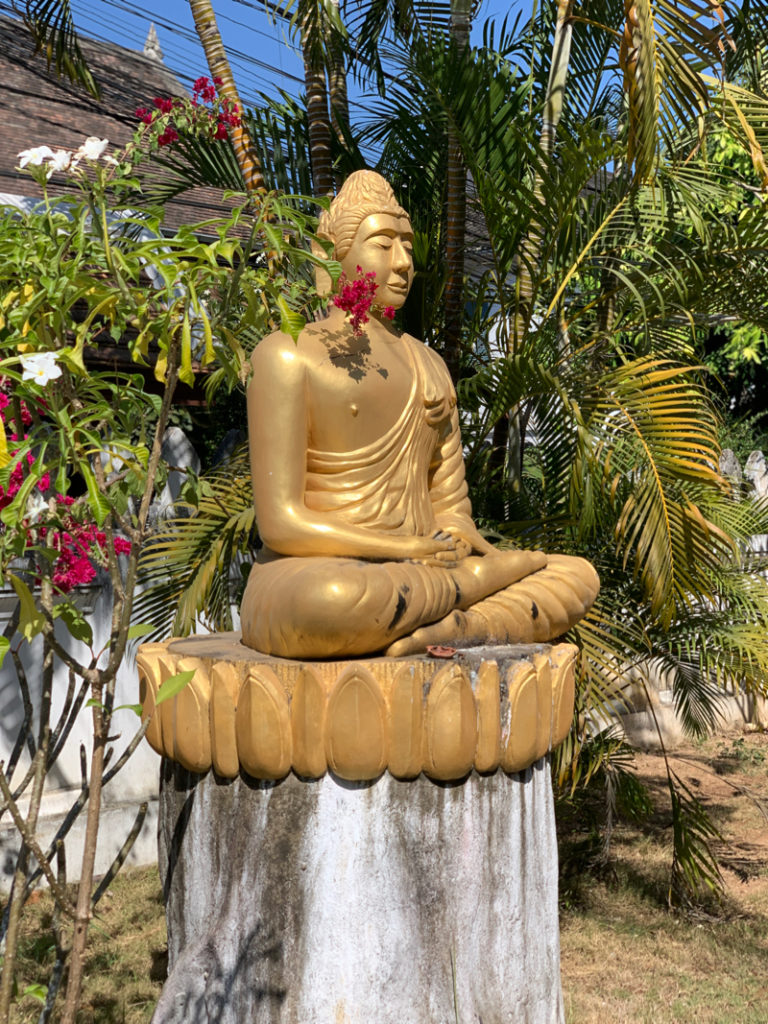 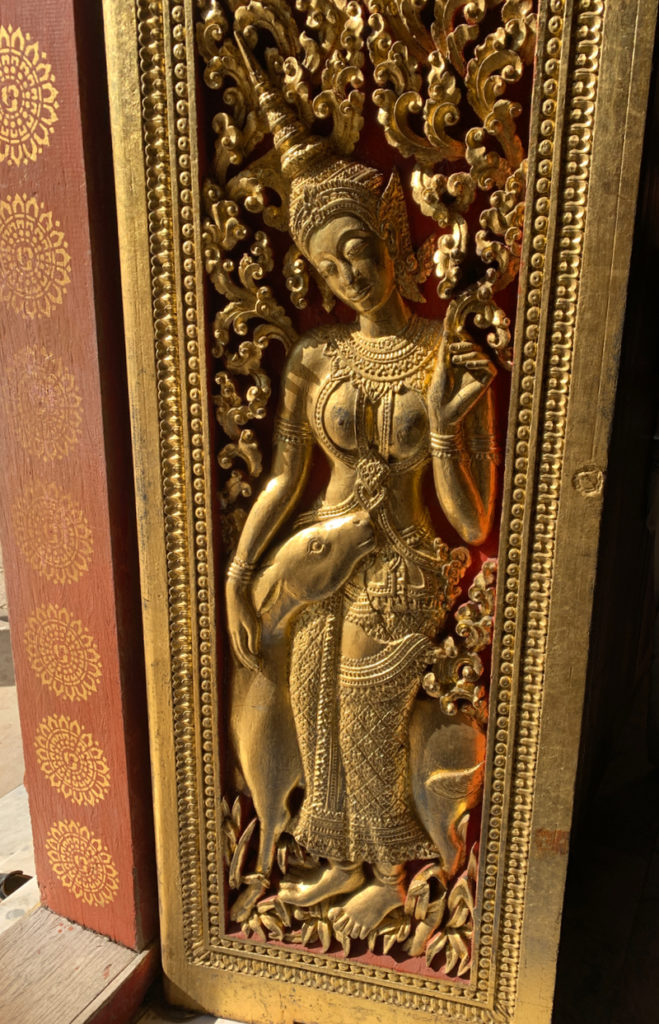 Still, the reality of the Buddhist doctrine is not as rosy and open as one may think.

The male monks cannot even touch a woman. A monk in Bangkok dropped a Buddha talisman into my hands like into a vessel, while he warmly gave another one to my husband. Even more unfairly, men adhere to substantially less rules than the Buddhist nuns are obliged to. If women in the country are allowed to become nuns at all (In Laos they are not, in Korea and Japan the shaved female heads join nunneries freely). As with other major religions, Buddhism is misogynist, aligned with the paternal culture of the past. My hiking guide, a former monk dressed in a baseball cap and trekking outfit, expressed his regret that in Laos women are not allowed to be equal in their choice to become a nun. His liberal millennial outlook is not only refreshing, outgrowing the old, dried out prejudice against women, but encouraging more open conversations about gender, intellect and the emotional make up of humans. It gave me hope and assured my purpose to contribute to the quest for equality.

Watching the visiting junior monks posing for their cell phone snaps in front of the Wat Xieng Thong, I wondered if technology can push the women’s scale for justice further towards the equilibrium. Later, I realised in my meditation that this is already happening and that I am part of this massive cultural and social shift swiping the globe. Any poetess or any woman that writes and publishes today fills the vast chasm of the past ignorance of female ideas and potential. 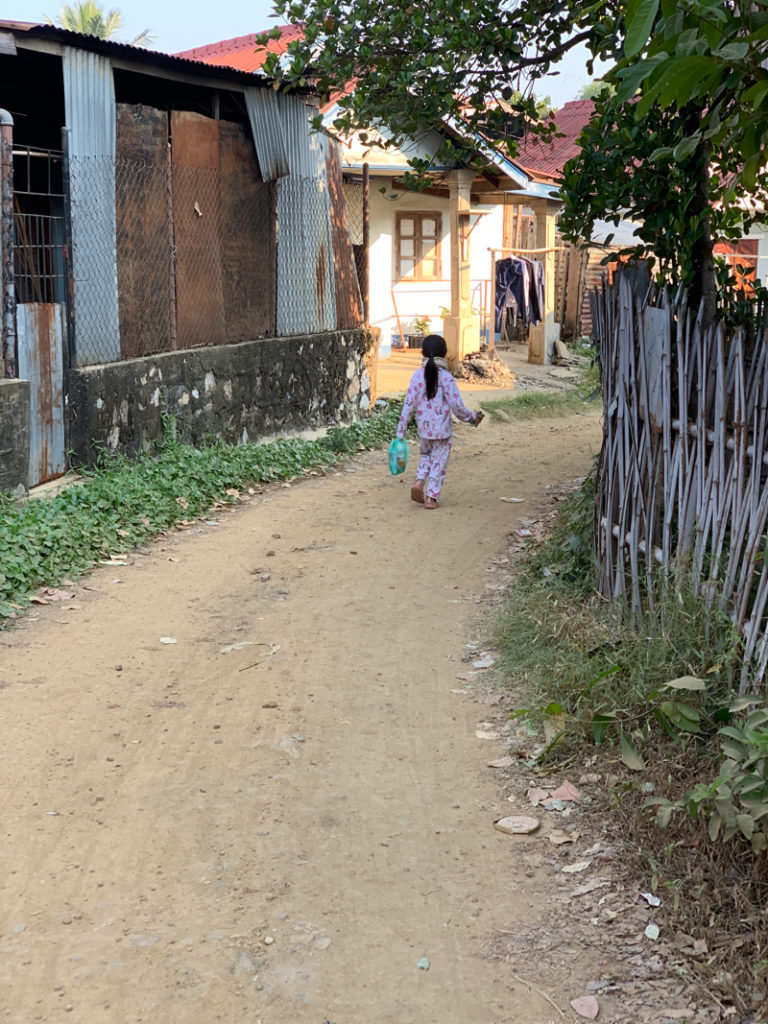 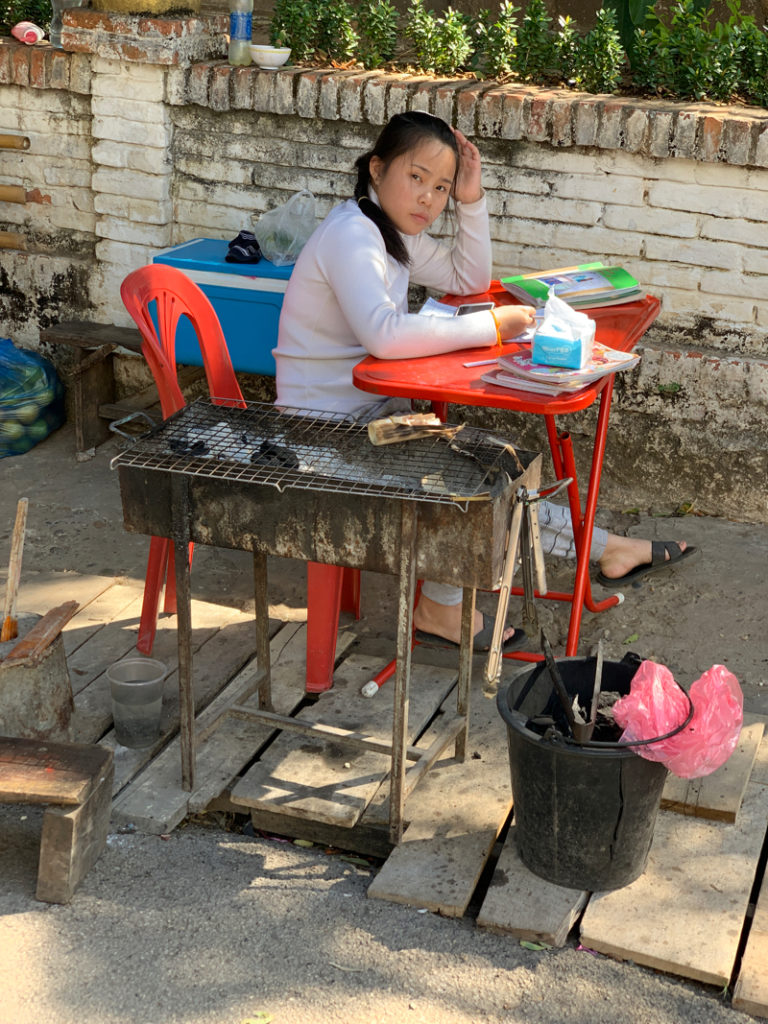 A woman myself, I felt empowered and proud, watching a schoolgirl in her humble (yet for my taste enviable) street writing set up between a wall of a temple, her family’s bbq and likely a tiny home across the road. Her chocolate gaze connected with my own. Dressed in a cream white pyjama, she learned to become an adult in this institutionalised world. Such outfits were common until very recently in China and Thailand, I find them amusing so it is sad realising that their bring-home-the-outdoors chic is disappearing. Later, further from the tourist centre, another pink pyjama wearing schoolgirl carrying a plastic bag with her errands strolled ahead of me. I smiled, she looked stylish in my eyes. 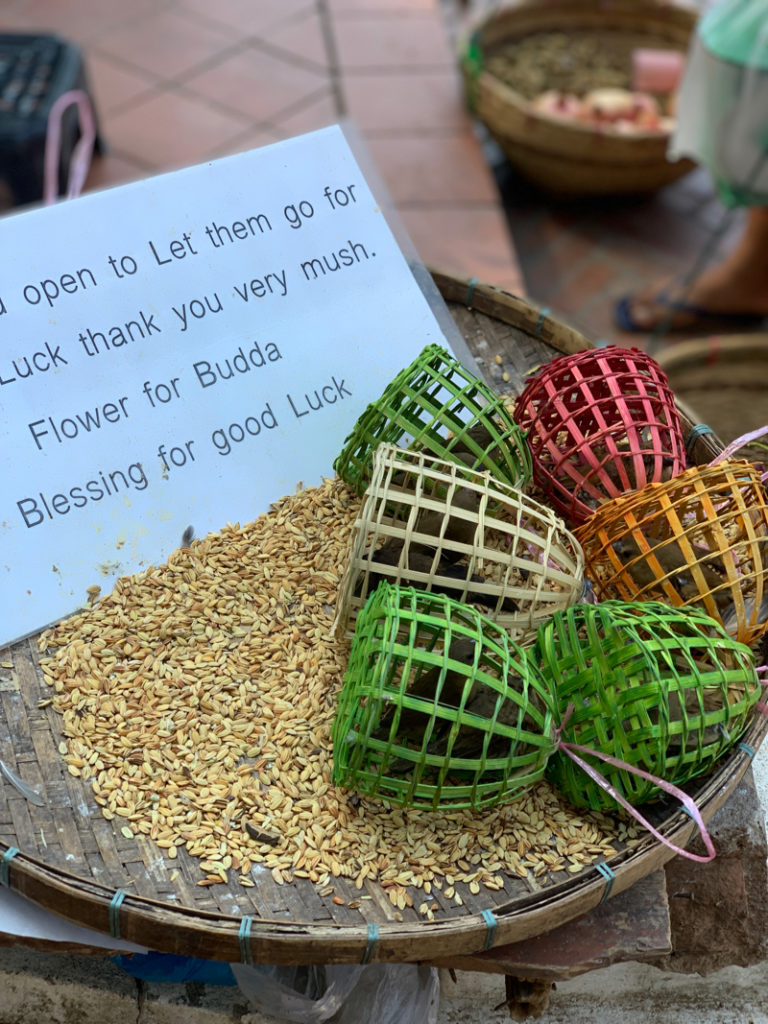 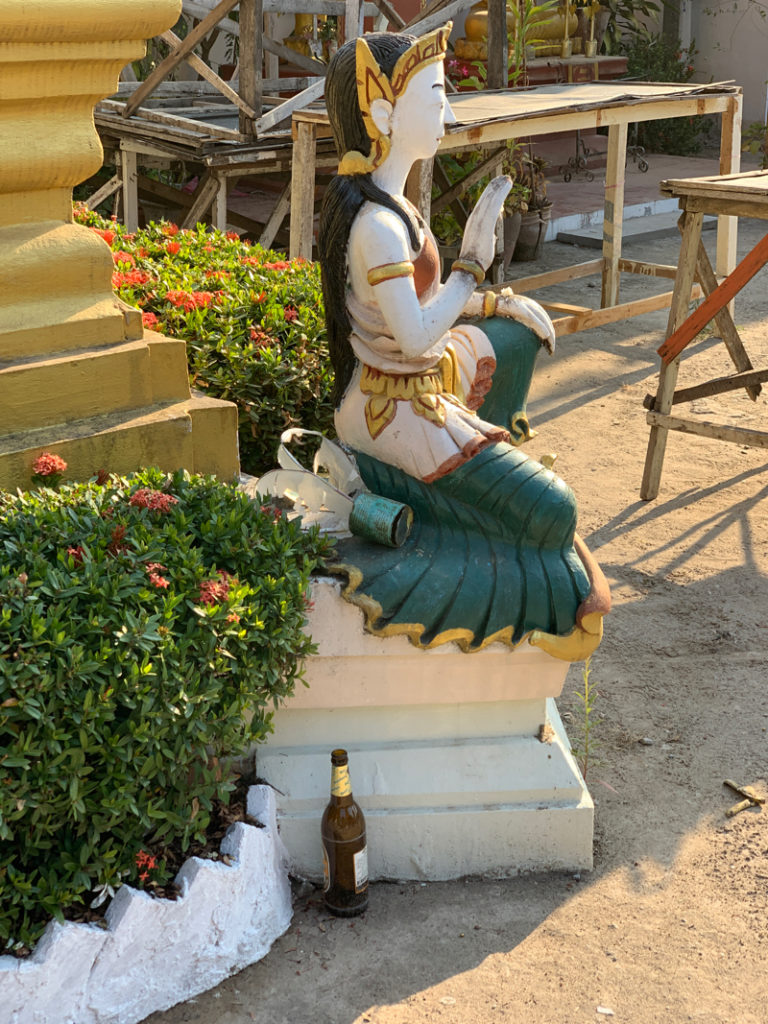 Off the beaten road

The Buddhist UNESCO heritage site mesmerises the visiting world through its religiously charged bounty. Battles, Gods, dancing Apsaras, suffering and royalty themes unite the reliefs and wall depictions at the numerous temples and the Royal Palace. Sadly, you cannot safely cycle around the dusty Luang Prabang where potholes cushion just enough the corpulent tyres of the locals’ motorbikes. Swarming around all day long, the polluting, yet convenient relics of the industrial era, should soon be replaced with e-bikes. So, I walked.

On my dusty venture, accompanied by the choir of stray dogs, I realised that most temples were unpretentious. A bottle of beer nested next to the River Goddess at one, kids played in the mud around another. The ease, naturalness, and directness of the locals impressed me. Compared with the costume show in Japan, Laos felt free and joyous. Squealing pigs teased to to peak through the holes in one house’s wall. There were about five, squashed on a tiny yard liveable for one max. I lost my naiveté of vegetarian Buddhism in a poor country. Nevertheless, the chickens roam free in their truly free-range habitats. Like the monks, accepting whatever is given to them in the once-per-day alms, meat is consumed if that is what is available. Ironically, the vegetarian cafés in town are frequented by foreigners. 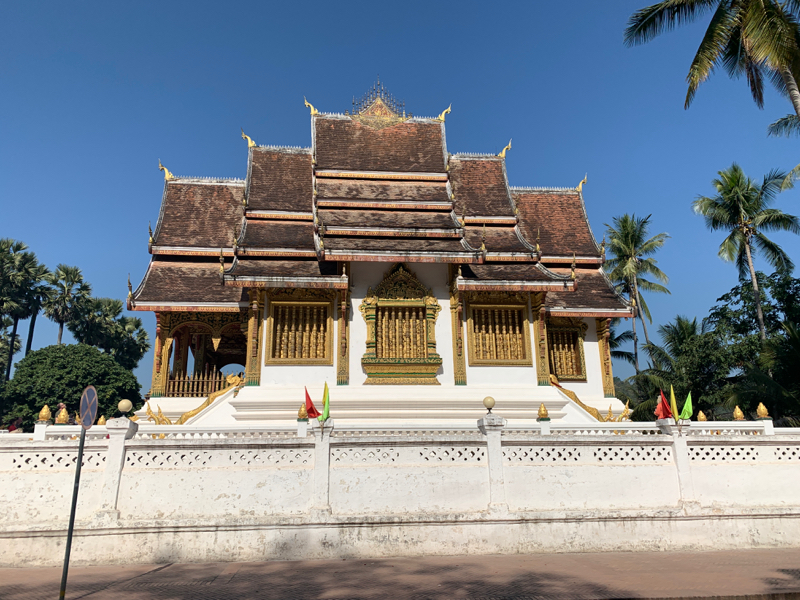 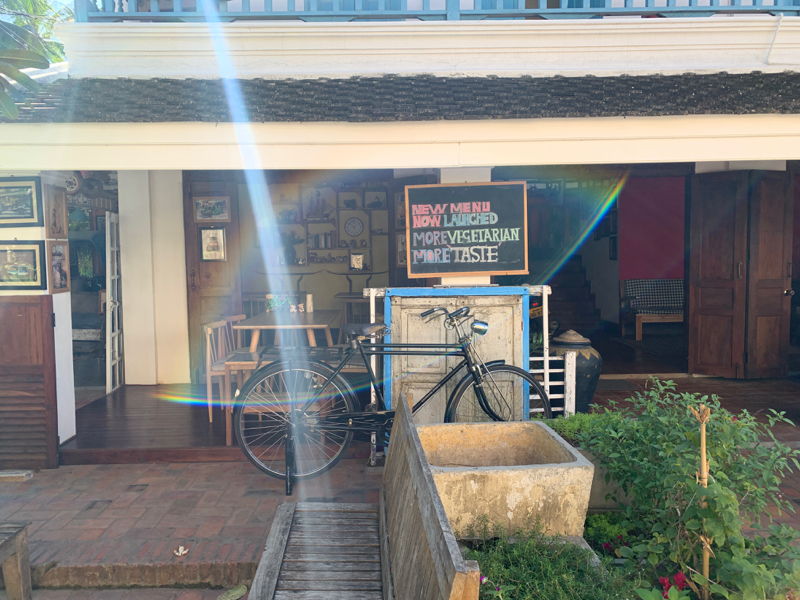 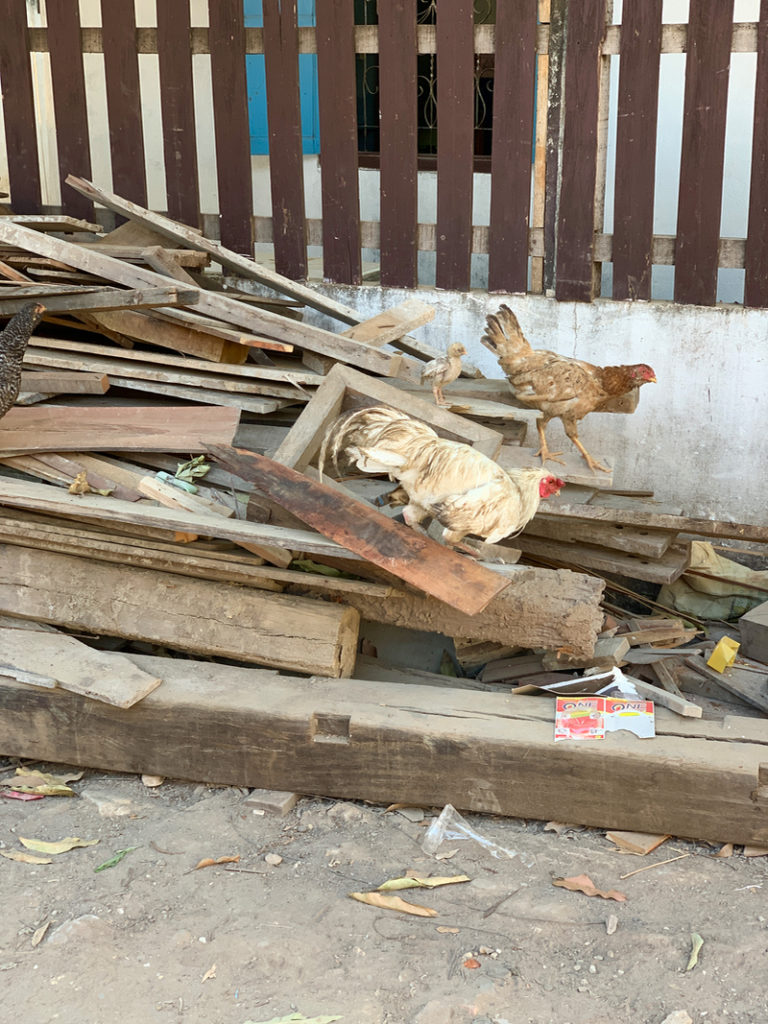 The girl scout in my sent me on a hiking mission that ended in lush vegetable gardens of an authentic local settlement. The adventure just started. Surprised yet smiling heads nodded me towards their hamlet’s shrine. A world’s more modest than the central temples around the Royal Palace. All offering stories on ethics, customs, sins, the royal or saintly life that elevates you into the heaven or cooks you viciously in the boiling pot of repentance. These murals confirmed what I already knew – life is a battle between suffering and joy, famine and feast – and was not that sure about – the afterlife will accentuate your life’s deeds into more of a hell of heavenly peace. These fearful images are quite a motivation! 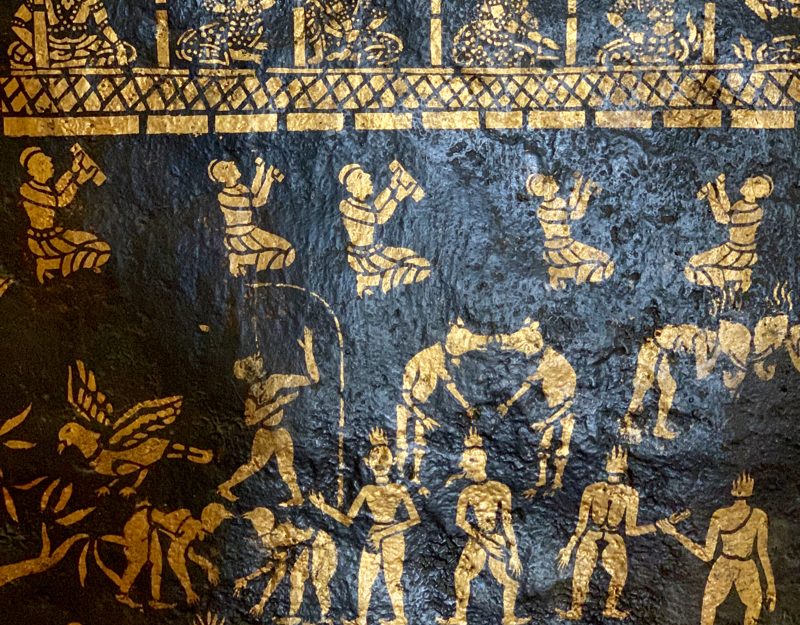 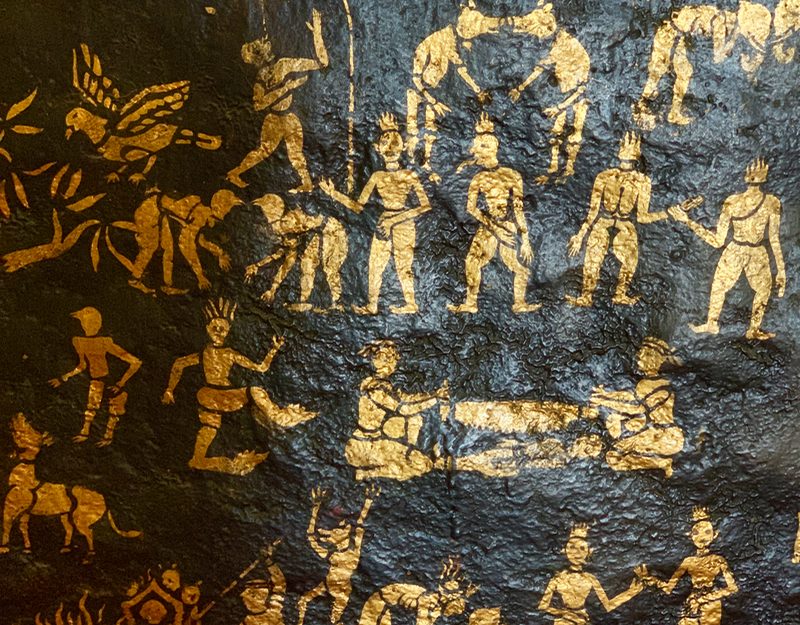 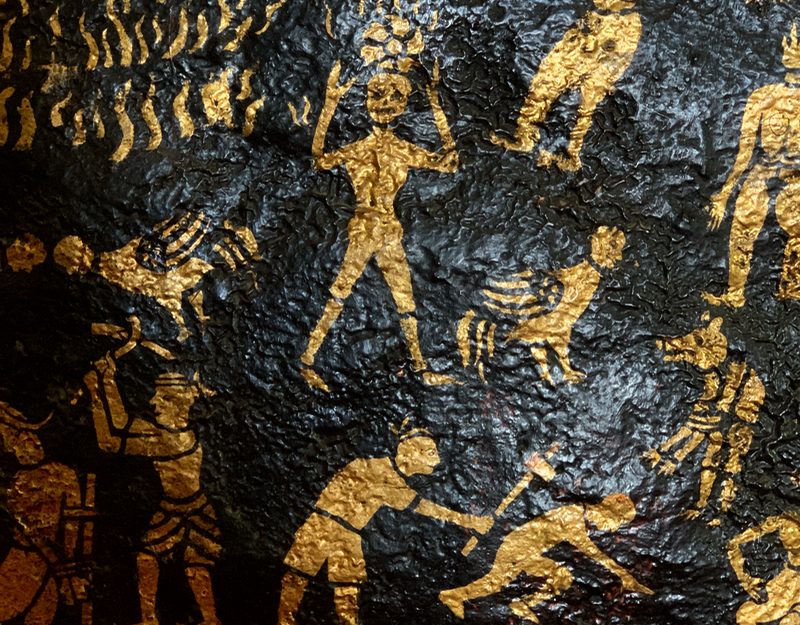 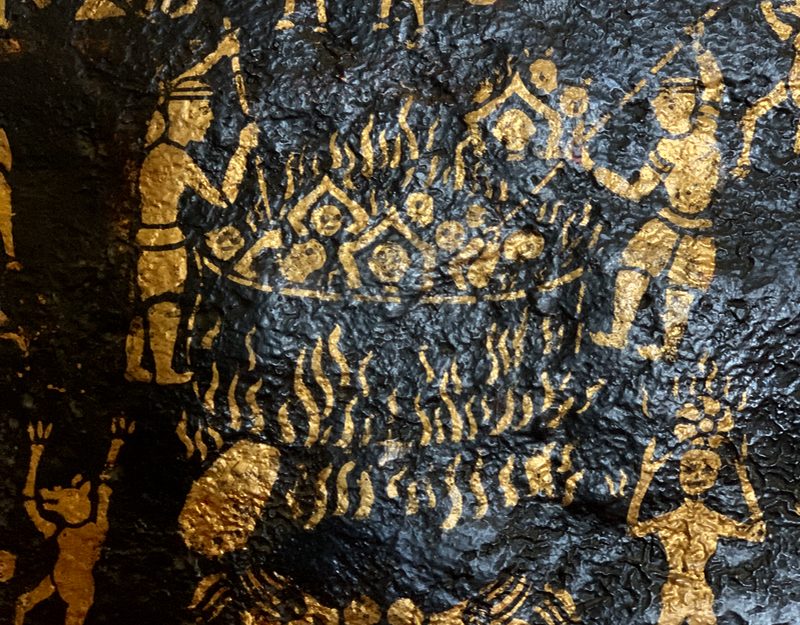 Back to reality of the second millennium AD. Compared with its giant, Northern neighbour China, where some 50 minorities have been unified into one language (Mandarin) over the last decades, Laos is an ant, alluring visitors through its own diversity. The landlocked Laos is home to 49 tribal groups, 160 ethnicities and about 90 different languages. The Chinese presence was inevitable, and the most popular temples such as the gold on black frescoed Wat Xieng Thong, are being weighed down by these new tourists. Until now, the Americans (post WWII), French (bringing coffee industry before them) and Thais (cloning their language on the locals recently) prevailed. Since the country’s opening to foreign travellers in a safer political climate from the 1990s things have moved faster than before. Now, the rich Chinese are changing the face of Luang Prabang more profoundly than any recent visitors. Further along the Mekong, new developments, hotels and residences are being built covered with Chinese characters.

If you want to experience the spiritual charms of Luang Prabang, go now before the monks move to the remote mountains. 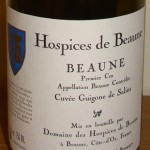 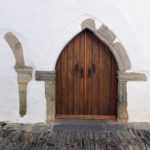 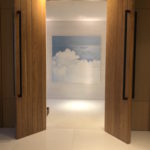 Gallery image with caption: The eternal wisdom of Lao Tzu condensed into poetry 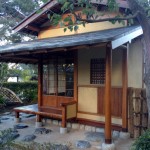 Gallery image with caption: Japanese tea house in the heart of Monaco