An exotic whiff of a lush pomegranate tree captured my senses as we parked our car in front of a pretty house with a sandy grey paint. This fertility symbolising plant dwells as a terra firma behind the burgundy hued signpost of Rivella Serafino winery, as if inviting passing folks inside the vinous house overlooking the winding Barbaresco slopes. 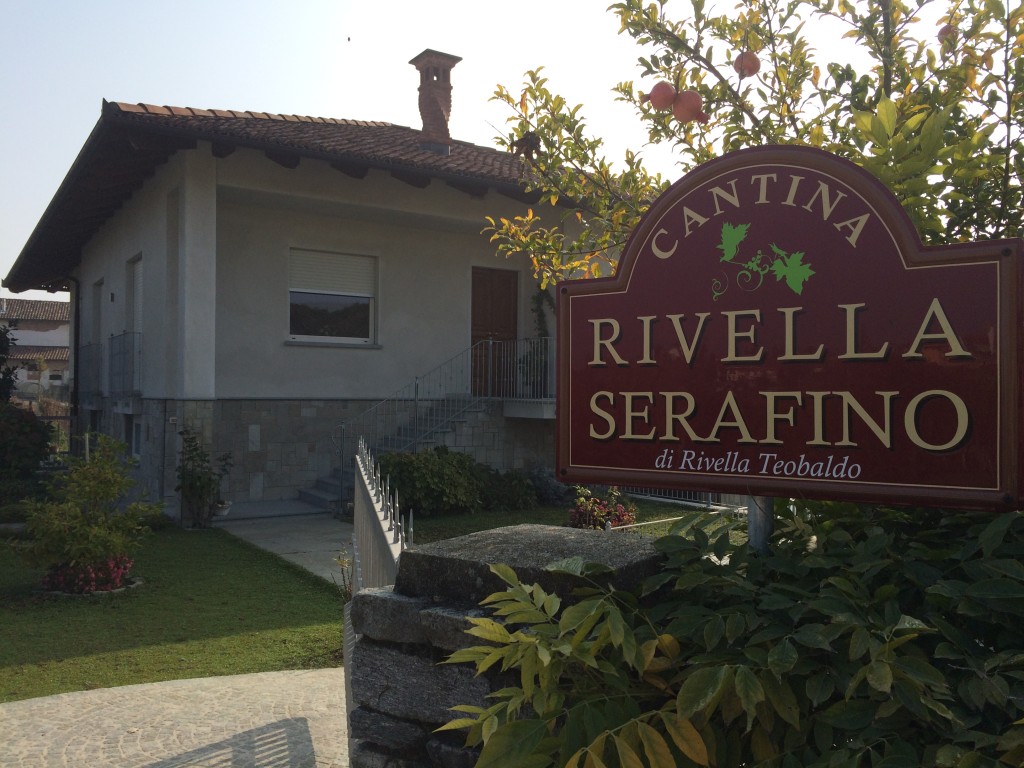 But, since the wine is made only by two people – Teobaldo Rivella and his supportive wife Maria, it is essential to schedule an appointment ahead. Tasting the fruits of their love labor yielding only a tiny production is operated solely from their Italian home. Serafino was the father of the current proprietor and winemaker Teobaldo Rivella, and perhaps to honour his paternal mentor Teobaldo, he kept the name of the family winery as it originally was – Rivella Serafino. 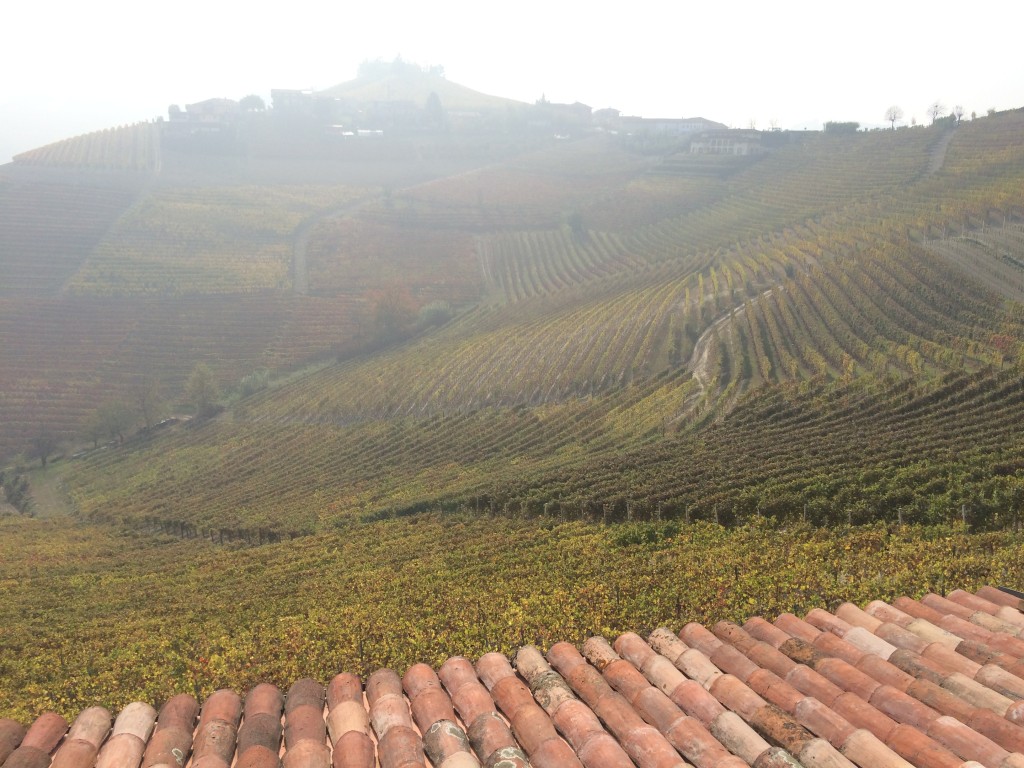 The recurrent characteristic foggy views from the house cantina (winery) stretch lazily over the noble slopes of their single cru Montestefano and other premium vineyards neighbouring the property. Firmly rooted in white calcium-rich marne (marl) soils, these over 60-year-old Nebbiolo vines, grow remarkably low off the ground, while the roots reach over six metres deep. Rivella’s viticultural methods remain close to nature with only sulphur and copper used in the vineyards. 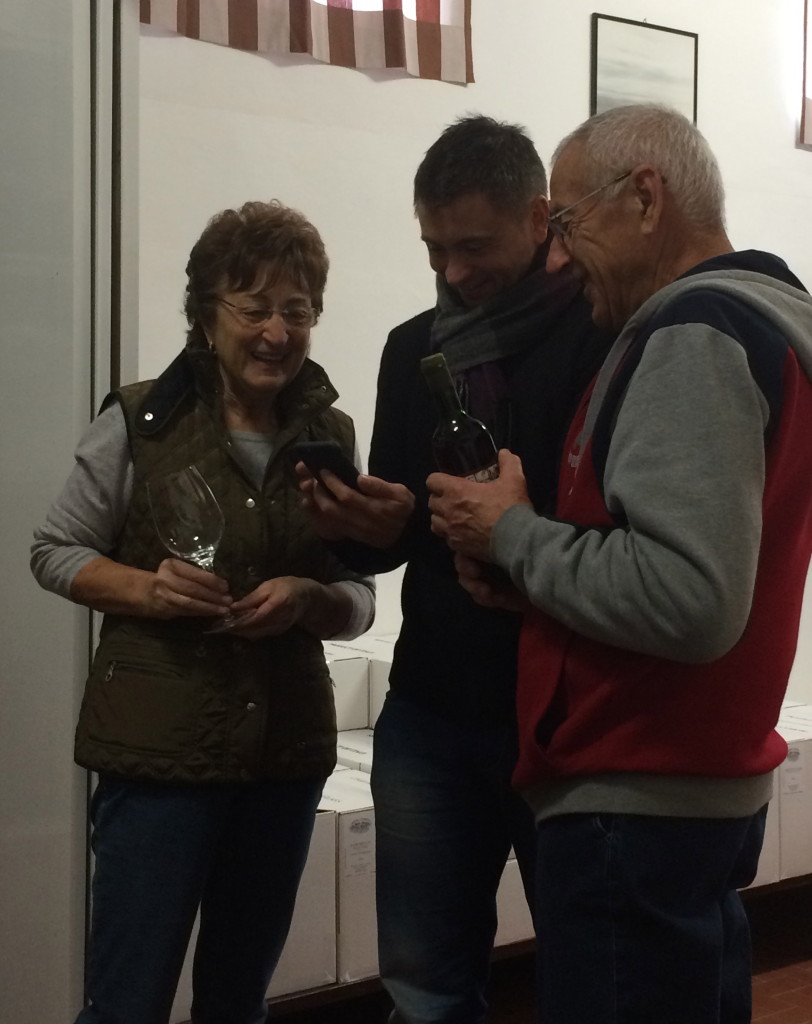 Not just this natural artisan practices, but also the minuscule size of the wineries and up to two digit scale of producers making wine from one cru, remind me of Burgundy in these and many other aspects.
Generosity is another common discerning trait. Our hosts Teobaldo Rivella and his wife treated us without hesitation to the best cuts of local salami, fresh crispy grissini and Italian cheeses. The genuine smiles never deserted their by age graced faces. 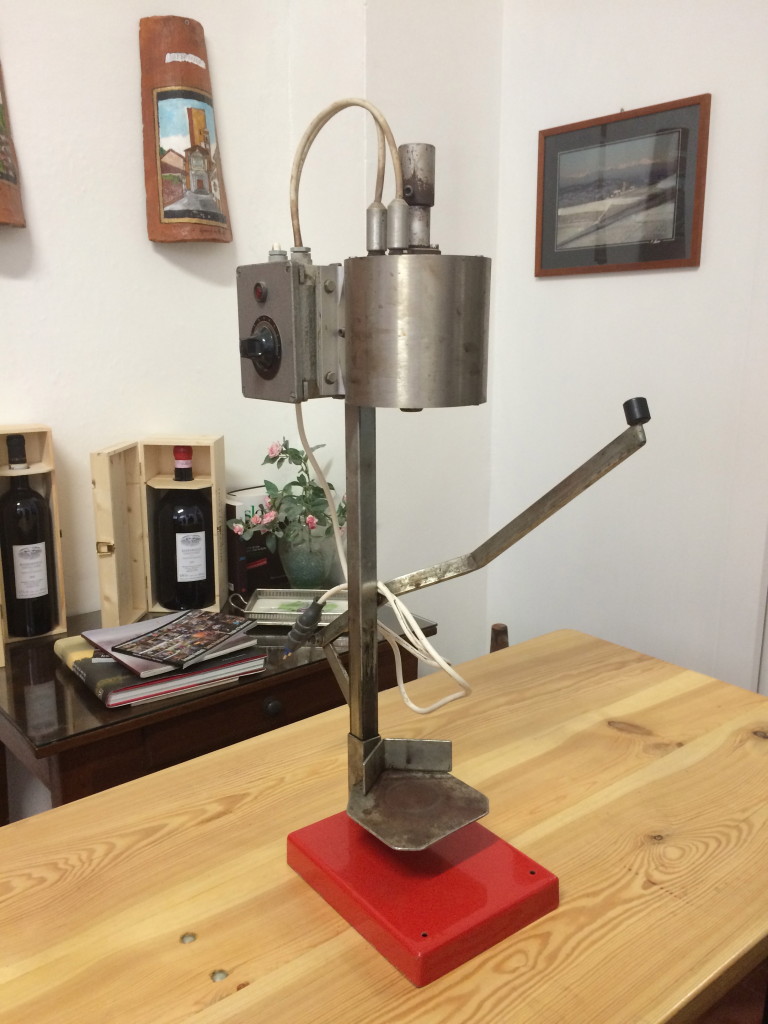 Their production from only two hectares of vineyards is so small that manual bottling, labelling and cork closing machines are used in the small workshop cum winery. It reminds me of the garagiste I saw in Chile, these wineries produce wine literally in their house garages. Teobaldo Rivella maintains the traditional Piedmontese approach to winemaking that his father instilled in him almost a half century ago. The wine is vinified in stainless-steel and partially in Slavonian oak for 15-20 days using wild yeast. Then it is matured in old Slavonian botte (oval shaped oak barrels) for about 24 – 36 months, which is over twice as long as the legal requirement for Barbaresco. 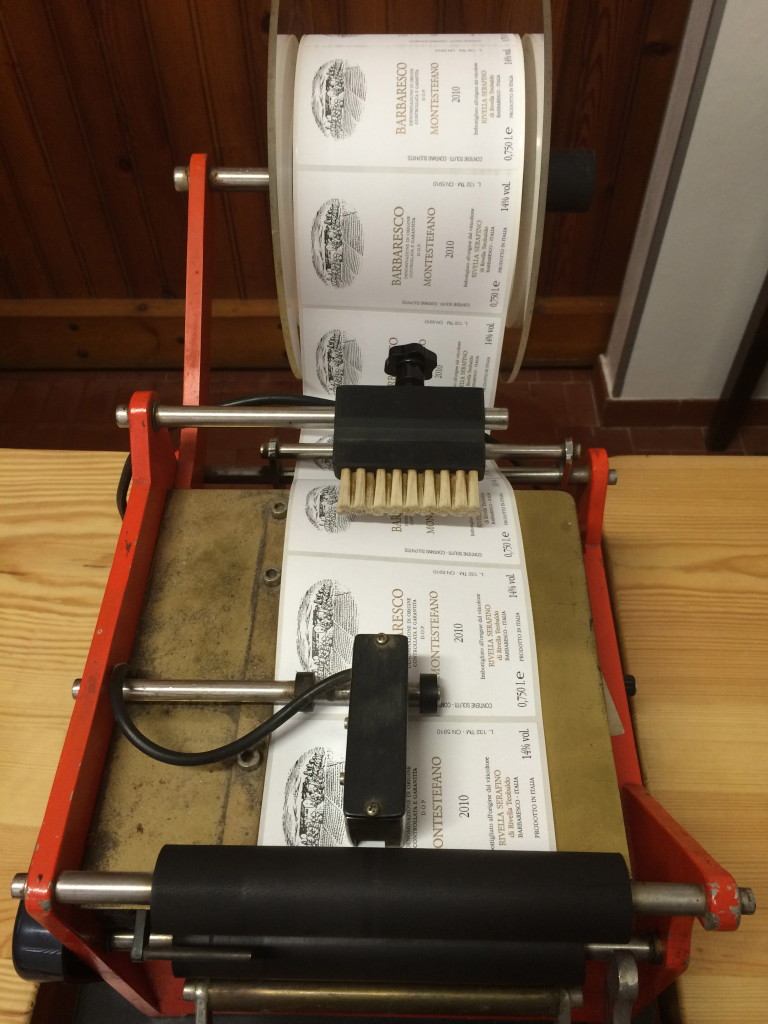 Like Barolo, the Barbaresco is made from Nebbiolo. For Rivella Serafino the signature wine is their single vineyard Barbaresco Montestefano. Rivella Serafino’s Montestefano curiously reflects its owner. Approachable, subtle and not showy. Yet, it is complex inside, with a tobacco depth and red fruit showing happily upfront. We tasted the still young 2010 and 2009 vintages of Montestefano Barbaresco. Later, at home, I tried the challenging 2006 vintage, which was marked by unfavourable weather patterns for grapes, in particular for the late ripening Nebbiolo. Controversially, some well-known producers such as Bruno Giacosa in Barolo, did not bottle their wines in 2006 as well as in 2010, and sold them in bulk. Most producers though accepted the challenge of the vintage and made good wines marked with livelier acidity than usually, but still displaying the underlying tobacco and black currant flavours. I had to wait for the wine to open for about three hours, and then it rewarded me with a more balanced and structurally softer mouthfeel. The 2009 was more structured and balanced, with medicinal, earthy and mushroomy aromas, although it is not yet ready to drink and needs a couple of years to soften up. The 2010 was more gamey, herbal and with a chewy cherry fruit. 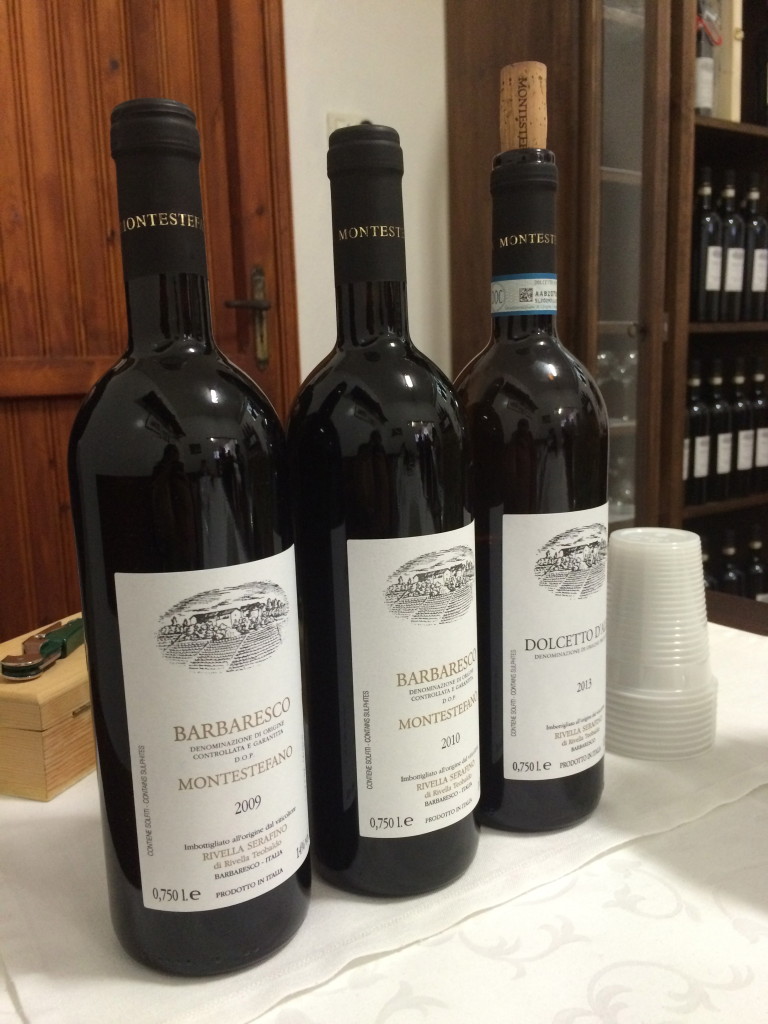 Rivella Serafino, like most of his neighbours, also makes a youthful and tannic Freisa and fresh red Dolcetto d’Alba DOC from the early ripening local Dolcetto varietal popular for an everyday drinking. It is much more fruity and easy to drink in its youth, and it charmed me the most easily from all the red wines produced in Piedmont.
Dolcetto is much more intense purple colour than Nebbiolo use in making Barbaresco. Nebbiolo is distinctive with its brownish tinge as if mirroring the Piedmontese roof tiles. The wine from Nebbiolo looses its colour faster than red wines made from other varietals, falsely suggesting, that it is much older than you would think. The trick lays in the fact that most high quality wines, if they are capable to survive, turn into this oxidation suggesting rusty liquid after 20 or more years in the bottle. 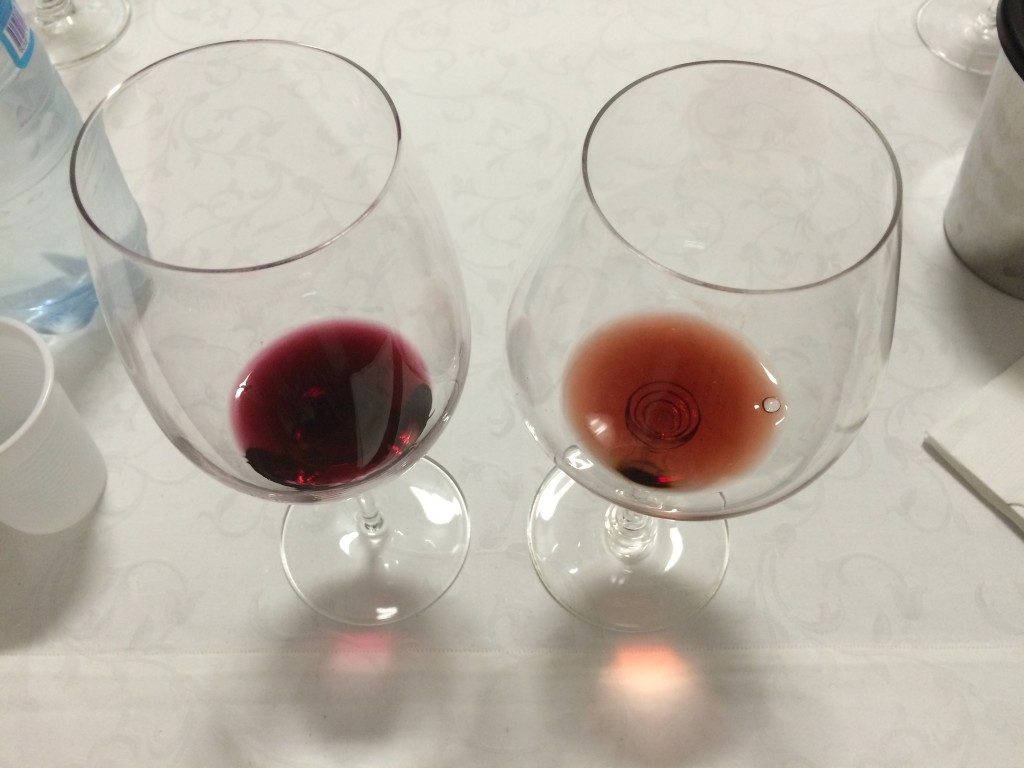 The prices as well as the production of these wines are much lower than of Rivella’s mighty neighbour Angelo Gaja’s, but it is not the fame that Rivella Serafino seeks, but rather peace and harmony with nature. Although there are many family owned and run wineries in Piedmont, from the innovative giants like Gaja to small ultra traditional producers such as Beppe Rinaldi, there are none run by a more lovable human being as is Teobaldo Rivella and his wife. She is the most organised and neatest lady and the best host you can imagine. The warm Italian hospitality is not a rule of thumb here in the North. Unlike in Argentina, where Mr Zuccardi naturally fanfares his Italian roots, in Piedmont there are many very strong characters involved in winemaking.