Momofuku ko is a mature upgrade dressed like a teenager. The awarded restaurant plays on rhythm, multiculturalism and fun on the Lower East Side. Now the hippest part of Manhattan, it was not so when the chef David Chang opened his immediately highly acclaimed eatery there a dozen years ago. Just say that name over and over and listen what comes out (a naughty blurb). Formally, Momofuku means “lucky peach” in Japanese (also it is the title of the founding chef’s well-received magazine on food culture), but more it is an homage to Momofuku Ando, the inventor of instant ramen, so popular with students as Chang once was. Breaker of preconceived paths, the brazen man studied religion at college and taught English in Japan before his culinary adventures at Manhattan’s Jean Georges, Tom Colicchio’s Craft and a two-year apprentice stint in Tokyo. Chang’s first restaurant was a ramen bar in the East Village. Ko means the “son of” in Korean and is a grown up offspring of his two previous culinary openings.  The stunning murals on the charcoal deep walls, a nightclub vibe and shared joy in an open space invite to a sophisticated meal, and reveal both the obvious and the alter ego of the concept. 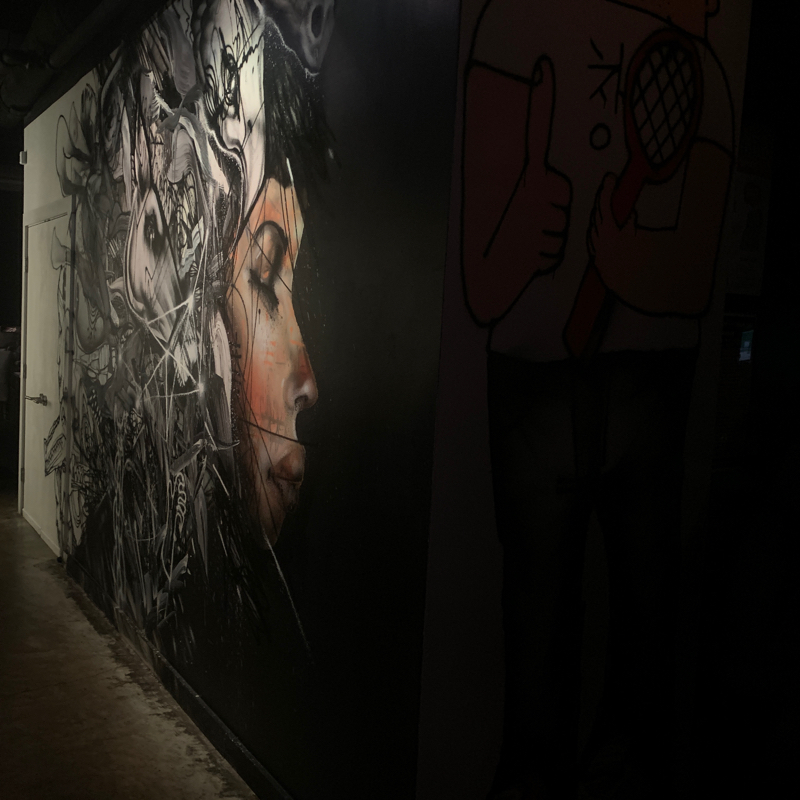 The son of lucky peach

As an Asian-American by his family’s Korean roots, Chang’s cuisine is more contemporary decadent American with frequent addition of Korean and Japanese ingredients. His food has that mouthwatering generosity in each bite that leaves you satisfied with just little. Like his inclusion of an abundantly creamy umami in uni. Chang understands tastiness so sea urchin features in most of his tasting menus as much as a rice course does. Hokkaido, Santa Barbara or even Vancouver provide the richest specimens. I cannot agree more with Michelin: “assured, innovative yet expertly balanced”, that is how all of our meals at Momofuku ko were to date. A solid two Michelin star menu since 2009. The NYT gave its full four stars.

Well, you are for a feast, so the first, slip into the mouth courses warm you up for the main feast. Seasonally changing, usually a sharable meat dish. As you u-shape the around open kitchen centered dining counter, the meat aging wall alerts vegetarians that this (as with the Chef’s Table at the Brooklyn Fare Midtown, yet we much prefer the more balanced, wholesome menu at Momofuku) is not their place of worship. 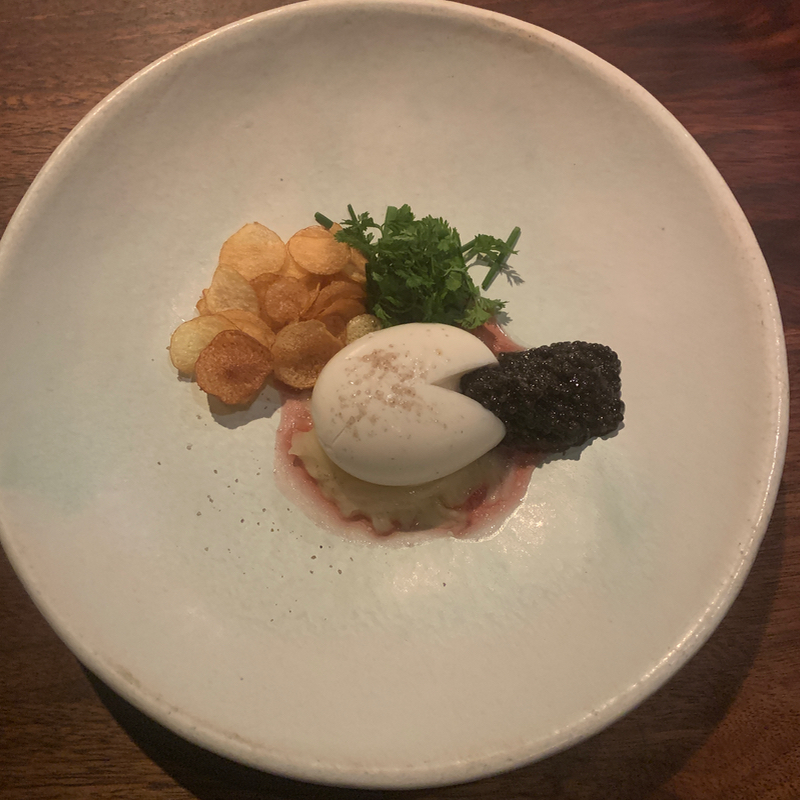 The consistent pleasure we derive from our tasting meals deserves praise in this turbulent time of change. I waited to revisit Momofuku ko until after the pandemic lockdowns settled the gastronomy in New York into more stable waters, and it paid off this fall. Yet another superb meal, this time not at the popular U-shaped counter, but at one of the two tables set ideally for people with dietary restrictions. Joined by an octogenarian family member, we had three different limitations – gluten, pork (I am the guilty renouncer of eating this holy cow of David Chang at his past eateries) and cow’s milk. While they cannot accommodate a 100 percent gluten-free meal, the team tries their best to reduce it for the sensitive individuals. With soy sauce being used in many preparations and with some dishes requiring days ahead of your meal, this wheat-containing condiment cannot easily be removed. Nobody left with a stomach ache, so well done kitchen!

Above all and next to deliciousness, the meal at Momofuku ko is about fun. The tasting evolves like a conversation. It starts with the sommelier’s suggestions, an optional beverage pairing, and a glass of something with good acidity to rise your appetite.

A trio of snacks may include the famous quadruple fried chicken drumstick served cold. Battered in a mix of cornstarch, flour, vodka, and beer, re-battered in between each fry, and finished with a brushing of mirin, yuzu, and green Tabasco, this is not for the sober bunch. A sublime crunch! Most recently we got a honeycut squash with gamtae, nori roll with lobster and egg yolk, and white truffle over coal-charred cabbage. Our choice of a bottle of exquisite, mineral French wine from Savoy scored a double jackpot at this entree. 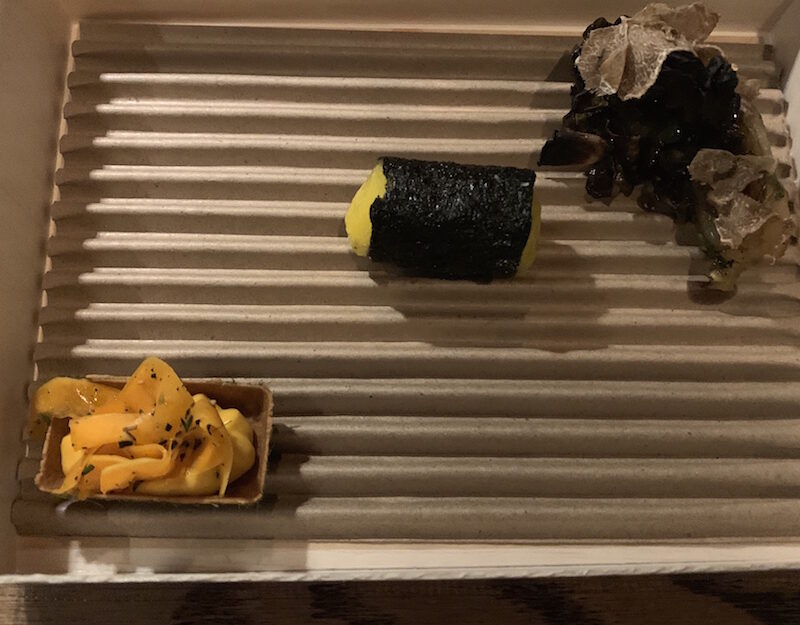 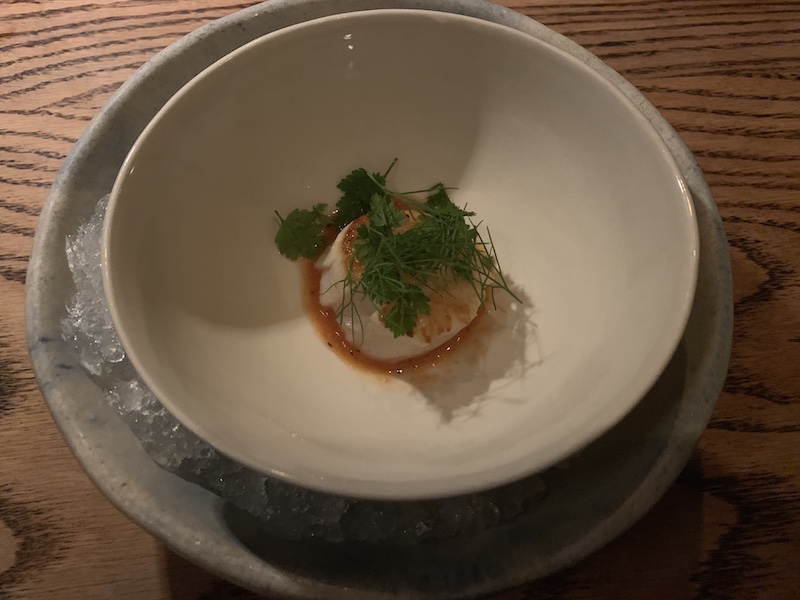 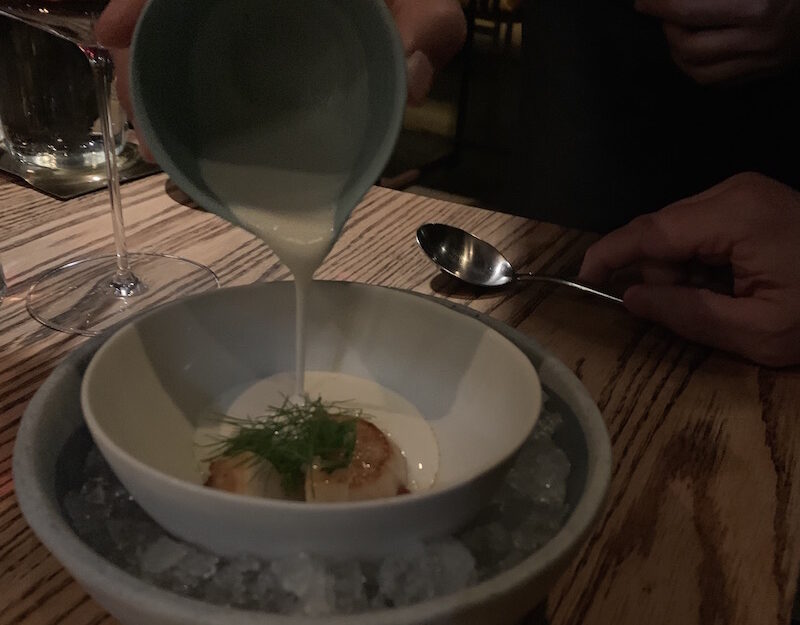 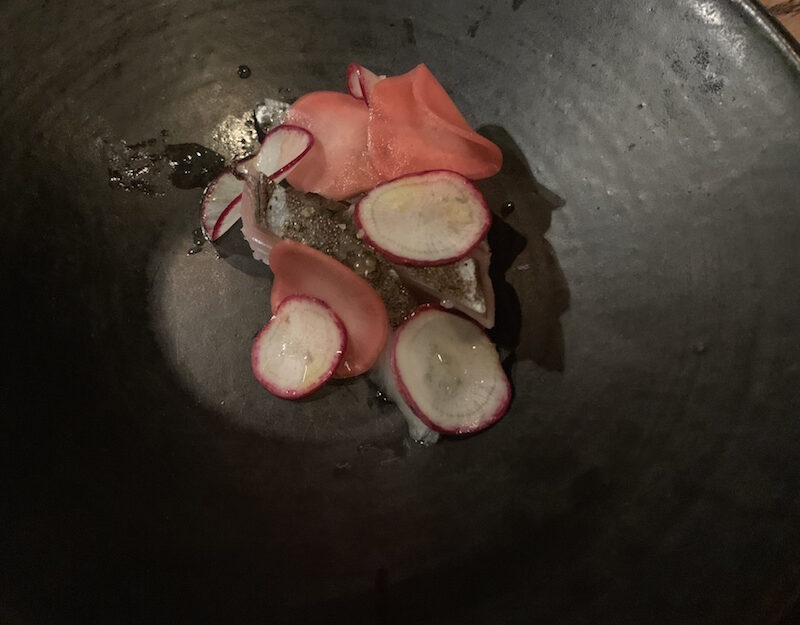 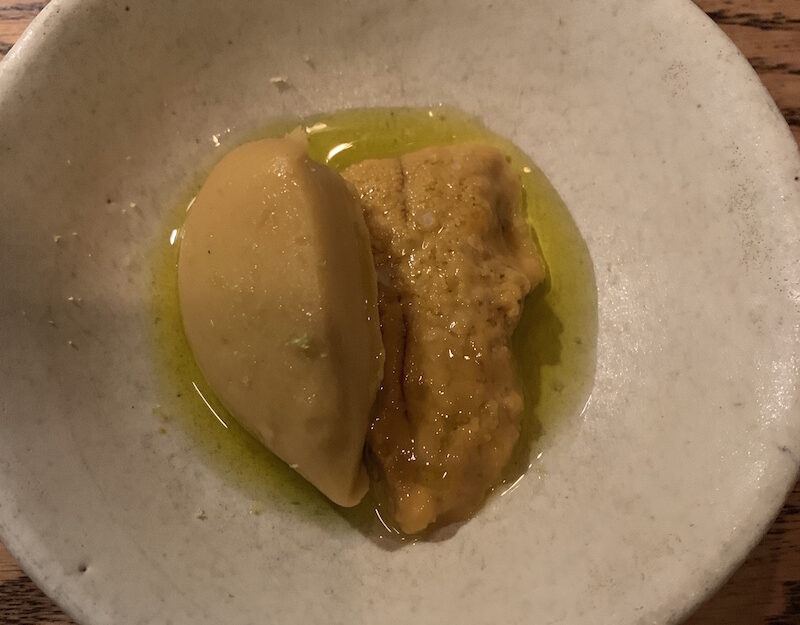 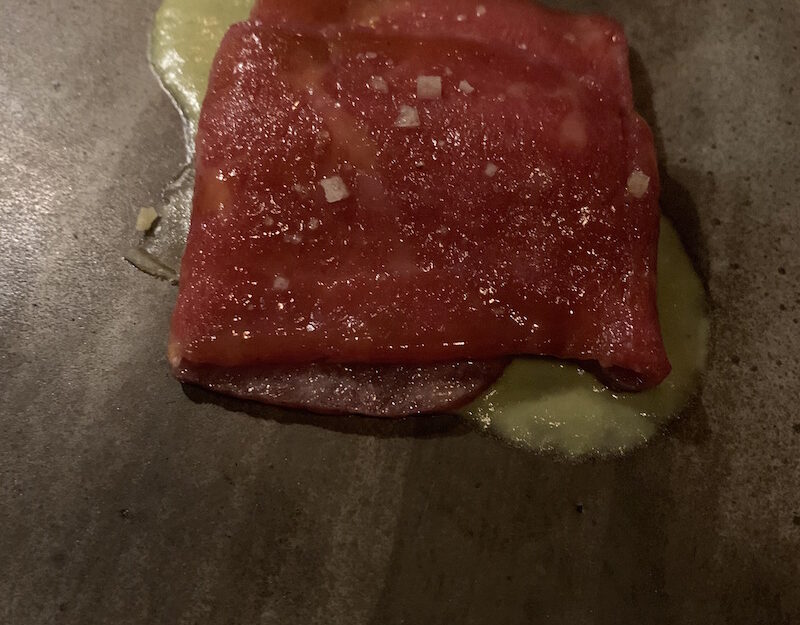 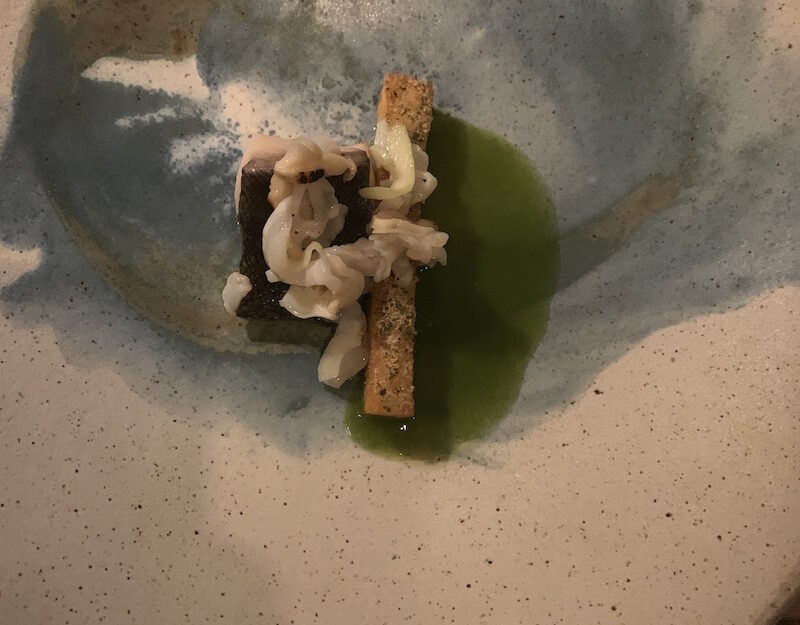 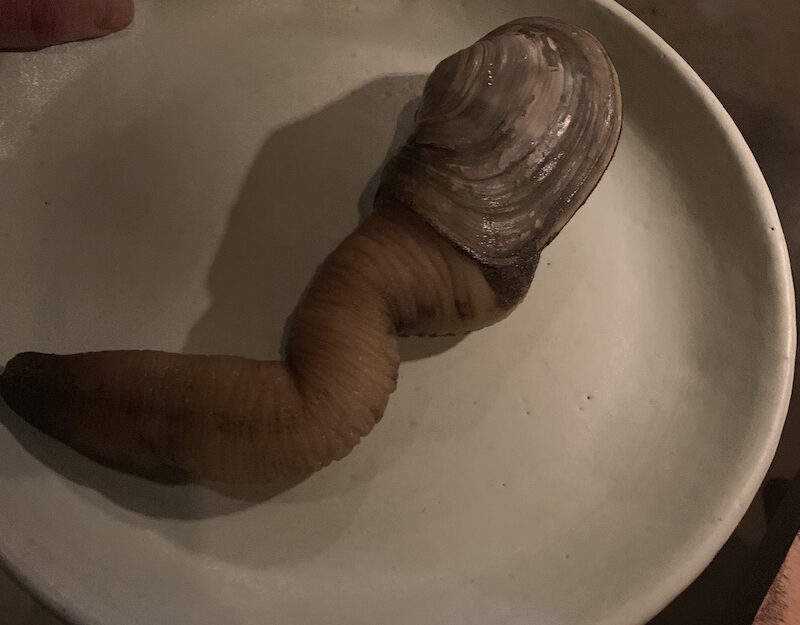 Some signature plates pop in and out of the tasting menu, to vary it for the regulars. I loved the Egg cut as if the caviar came from its mouth like a blurb. Garlic chips make everything more fun. Seafood is beloved here. Scallop, soybeans, tomato was finished with a sauce from pine nuts at the table, while when asking what was that mysterious seafood in the Black cod dish, the waiter did not hesitate to bring me the entire geoduck! It’s a peculiar shellfish, and some might rather prefer not seeing it, just savour. At Momofuku ko, the service is as friendly and helpful as it can be.

This fall, an exquisite roasted duck oomh and ooohed our taste buds. Heritage Mallard and Pekin duck cross called a Rohan™ Duckling is less fatty than the Pekin breed, just perfect for a dish like the Roast duck with fried rice we had this fall. Sometimes smoked Muscovy duck breast takes its turn as the chefs team do not sit on their laurels and constantly play with the always tasty dishes.

This food is what a great gastronomy should be, not pretentious, for the sake of newness creating dishes, but consistent yuminess in each morsel. That ecstatic exuberance of hedonism of David Chang is, I think, key to his success. Sustainability is also on the team’s mind. Most parts of the duck, like the usually discarded neck is shaved like bottarga over the crispy skin of the bird, or fish skin and bones are used in the meal. 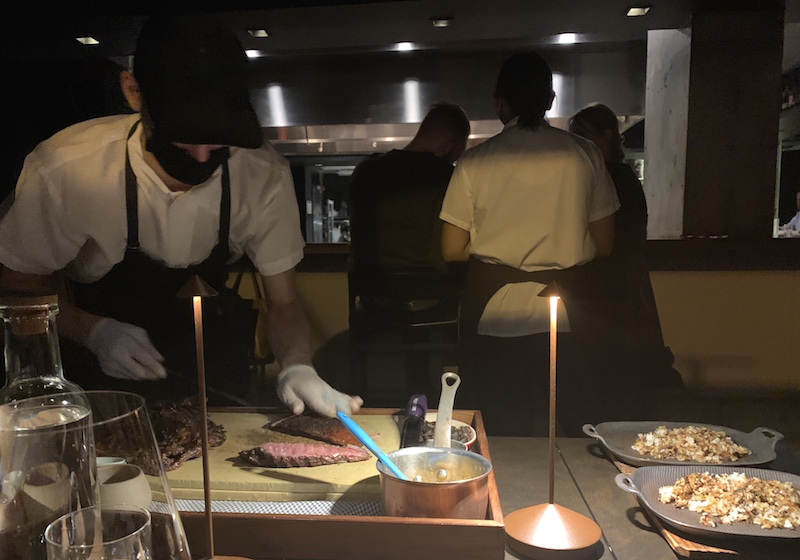 Desserts come in four incarnations. In the French fine dining style, a lighter ice cream or sorbet transitions from the savory courses. Do not expect watery mouthfuls though. Ginger gelato, soy cream or something in that flavorful genre. With my recent cow’s milk and cream restriction, I was treated to by any way no less creative concoctions of sweet joy. The last Fernet (herbal Italian and in Argentina popular liquor), fig coated in dark chocolate with spiky cocoa nibs ball was a blast to remember.

Just in case you were not full, the waiter appears before your departure and slices squares of tomato focaccia to go either for on the way back indulgence or a breakfast if you resist biting in when it is still warm. A finale like we want it. Chang is aware of hedonists’ guilty pleasures. Usually after a long tasting menu and even longer list of wines we consumed, we enroll at a nearby pizza joint to round it up. We are young, still so young, we tend to thing. Hello friends! You know that beat. It is been some fifteen years since we had started this anthem of post-gastronomic indulgence. 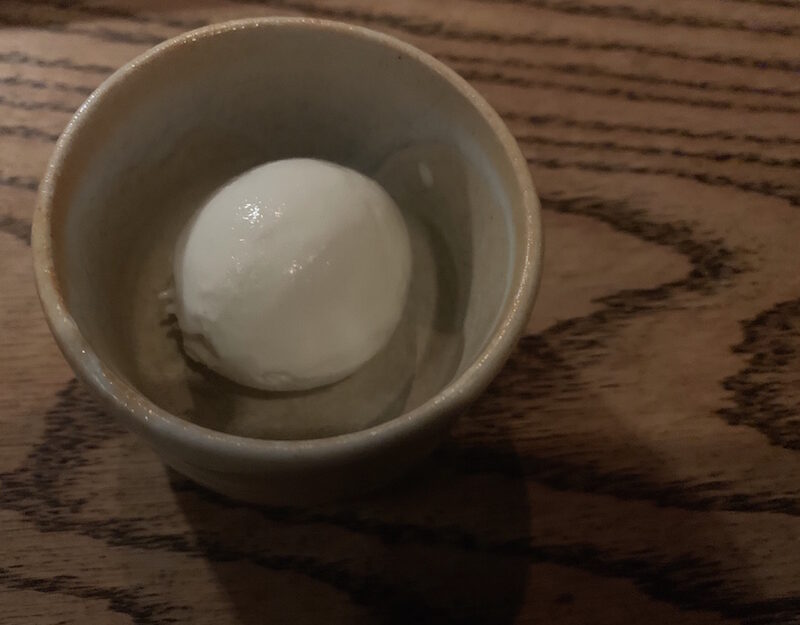 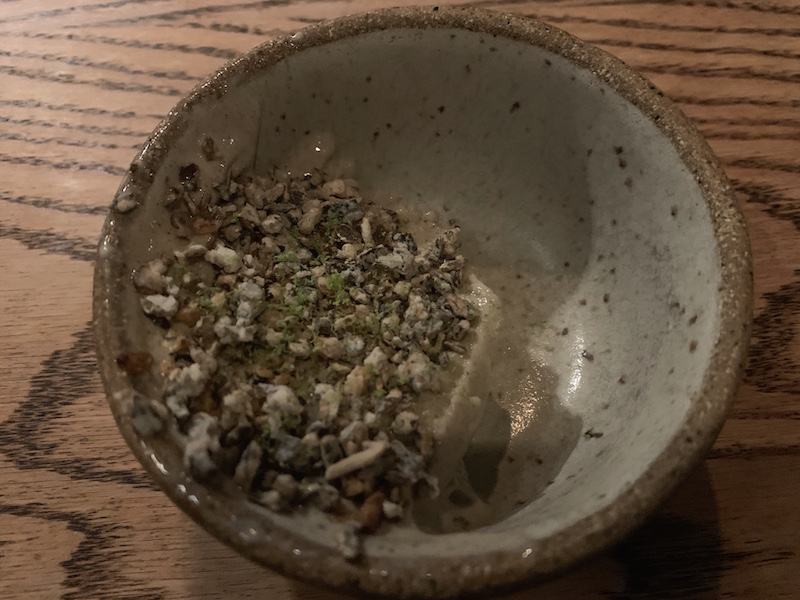 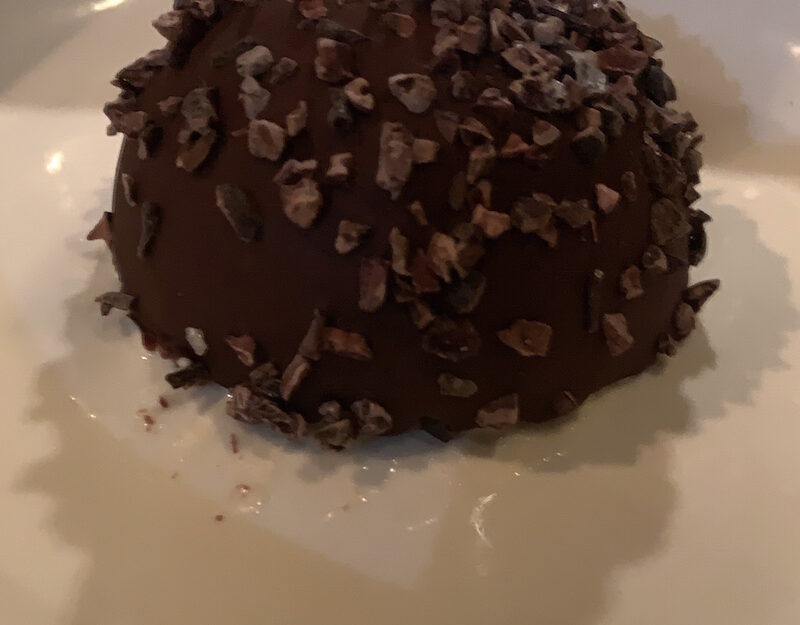 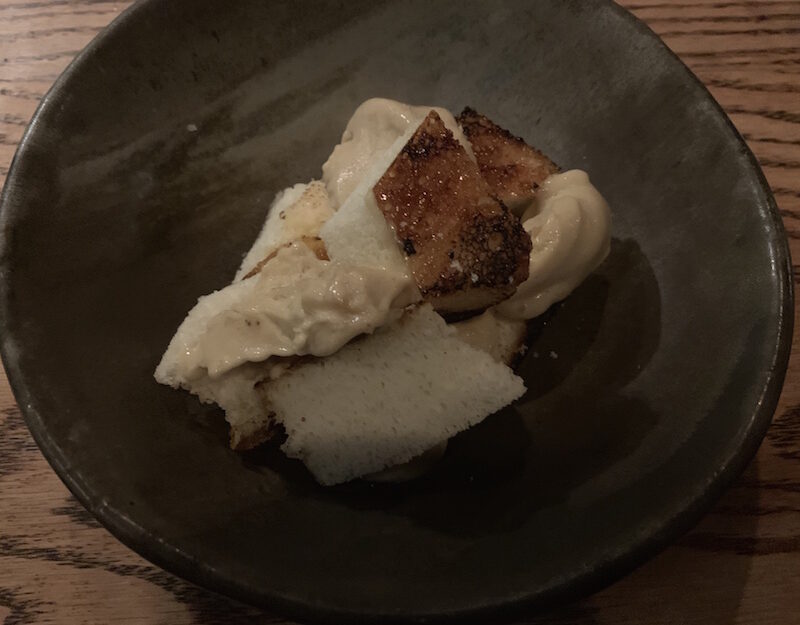 The wine list to match the accessible spirit of Momofuku ko

The wine list looks familiar for those who frequent the Brooklyn Fare. The current sommelier there used to stock Momofuku ko’s cellar. We rejoiced at our favourite bottles, very niche producers not found easily elsewhere. Many organic or biodynamic wineries. It was a pleasure to find a well aged red (Le Clos 2007) by Domaine Milan who makes one of the best wines in Provence. We started with the super mineral white Altesse in Quartz by the Savoyard Domaine des Ardoisières, whose richer Schiste blend of indigenous Jaquère, Roussane, Malvoisie and Mondeuse Blanche we also adore. Les coteaux de Cevins offer an incredible terroir for the crisp wine lovers. The French cellar is just so well stocked and fairly priced for Manhattan that we mostly go for old world bottles aged perfectly. On a birthday occasion, Cheval Blanc 1966 awed our palates with its stamina. A mature Rioja or Emidio Pepe from Italy rejoice most old world wine lovers boundlessly. 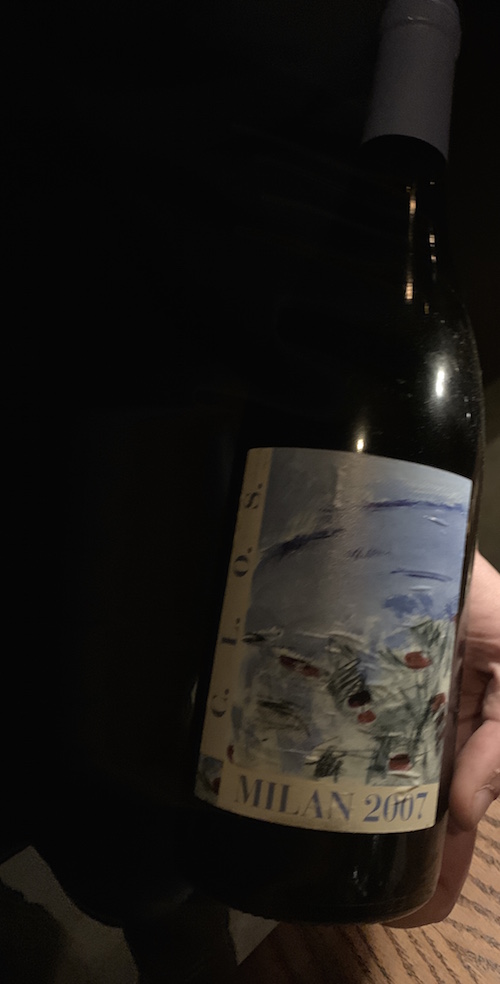 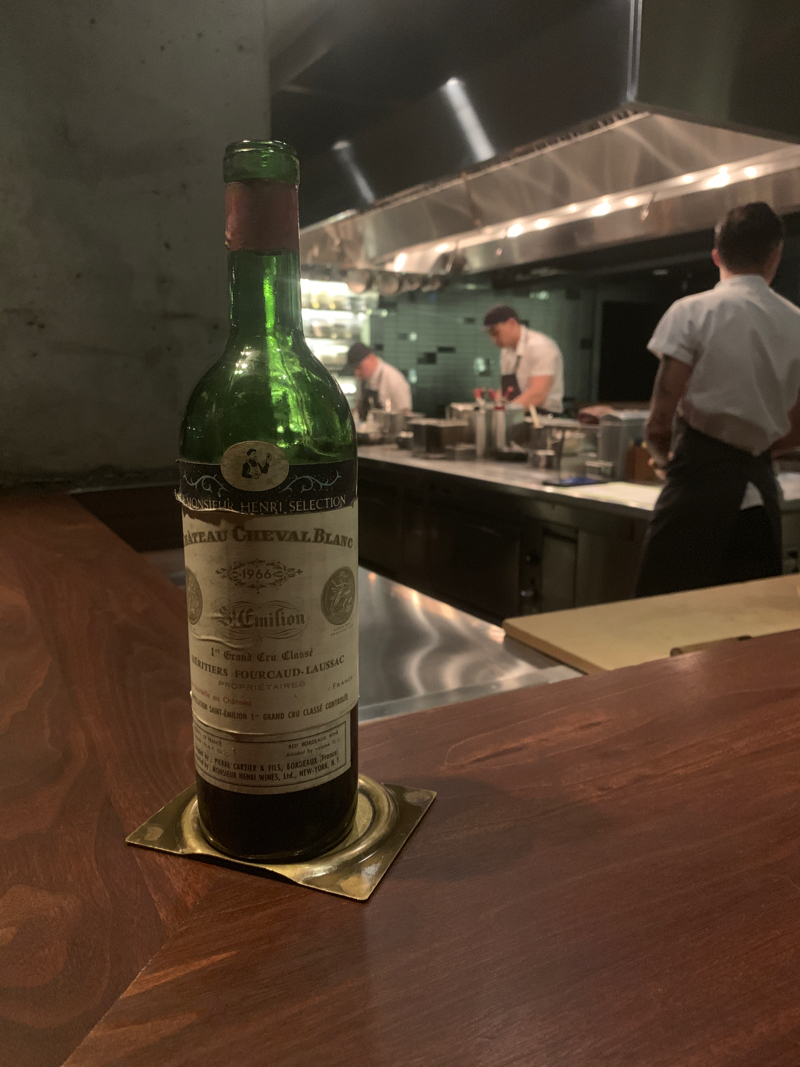 If you don’t dare for the tasting menu and would like to sample some of David Chang’s dishes a la carte, there is a “testing kitchen” bar where you can luck yourself at first come first serve, sans reservations counter. The chef’s emphasis on accessibility blooms here. One does not have to luck oneself with snapping the so hard to get reservation at the main stage, the hours lasting orgy of hedonism and a set price slightly over $200 (which is rather low for the current Manhattan standards at fine dining multi-course dinners) and just show up at the Bar. We are so glad that a restaurant like this exists in New York.

The location is quite puzzling in the gridded Manhattan. You need to walk literally into an “extra” cul de sac on the First street.