The adventurous story of Marou chocolate

After some globetrotting Vincent met Samuel in Vietnam and during a motorbike adventure in the jungle they set to trace a cocoa farm that they found on the internet. That was in the Ba Ria Province, where later the Marou chocolate team bought their first cocoa beans. After curiously baking the beans at Vincent’s mother’s oven in France, moving to Sam’s oven in Vietnam and later to a wet grinder bought in Singapore’s Little India, the evolution of flavours kicked on. “We were just trusting our palates. We cracked the beans by hand at that point—the two of us, working for an hour, could produce half a kilo of finished chocolate”, writes Vincent on their website. But that product was not perfect so they hired a trained chocolatier, who didn’t know, back then, how to make chocolate from beans. Yet they all learned, and now the Marou chocolate team helps the cocoa farmers to grow great beans. Seasonality and annual variability are challenging, since “droughts tend to draw sharper, citrus notes, while heavy rains invite fruit and spice flavors to blossom”. 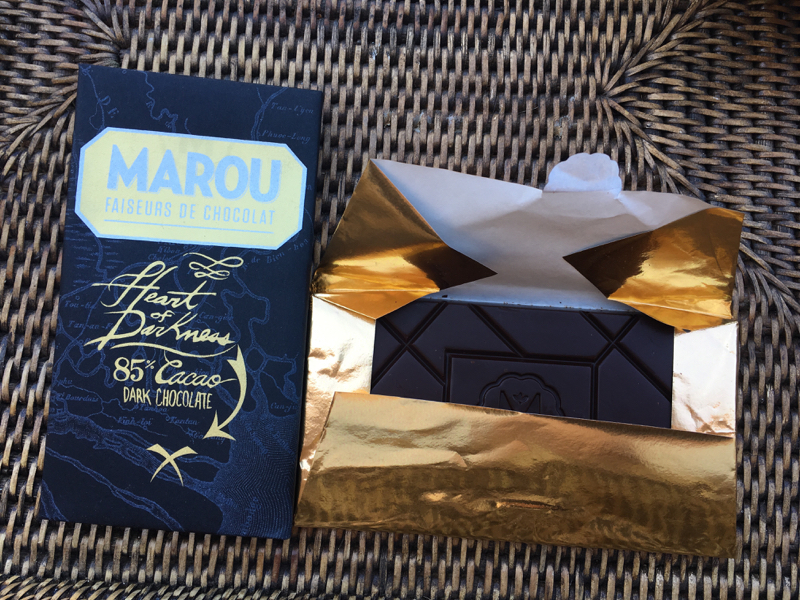 Today, Marou chocolate directly source from six provinces across Vietnam and focus on making single-origin chocolate bars. The fermented beans are transported to Marou’s chocolate factory in Saigon where, driven by terroir they are gently transformed into the distinct single origin bars. For their colourfully wrapped in Rice Creative design dark chocolate bars a different cocoa percentage was crafted for each region. Marou chocolate use cane sugar because it allows the cocoa to shine through. 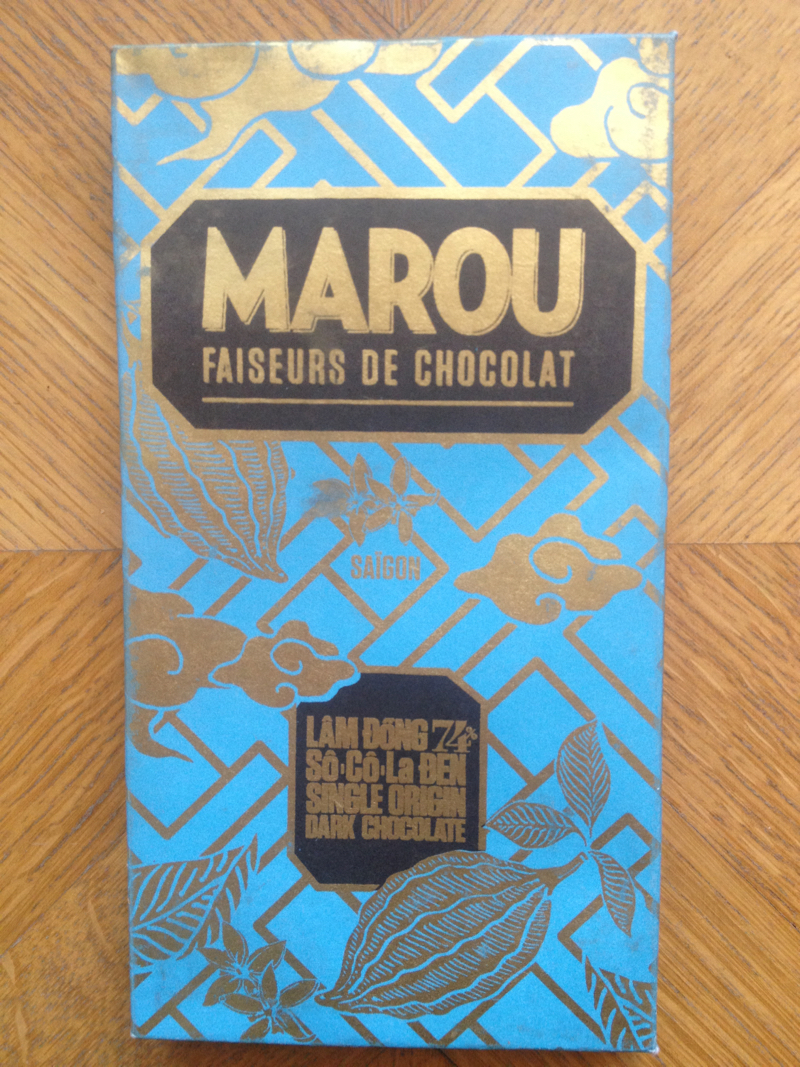 My favourite bars are the Lam Dong 74% cocoa in aqua paper wrap. Prune, coffee, a hint of red apple, balanced with cool mountain freshness, mild acidity and no bitterness, creamy smooth feel.
Ba Ria 76% in a vermillion red tint reflects the iron-rich soil it grows in. Brightened with fresh fruit scents – black currant, maracuja, stone fruit with sour mango and plum touch. A pinch of acidity finishing with dried plum and tree bark lingers for minutes in this complex chocolate.
The spring leaf green hued paper of Ben Tre 78% cocoa wraps hazelnut playfulness and tongue enveloping creamy sweetness with occasional pops of fruitiness.
Heart of Darkness 85% cacao bolsters with honeyed dirt, earth, humus flavours with exotic coconut and passion fruit backbone. For some an acquired taste, but for the fascinated ultra-dark chocolate lovers the complexity and creamy smooth texture with deep long earthy finish is intriguing. The beans are grown on the island of Tan Phu Dong in the Mekong Delta. Gold medal at the International Chocolate Awards seals its attractiveness.
The Treasure Island is also off-mainland sourced cocoa from small, family owned farms on the island of Tan Phu Dong. The 75% bar has a smooth texture with red fruits bite.
The other bars in the Marou chocolate palate wheel like the purple earthy Dak Lak and the gold bitter and tropical fruity Dong Nai are also great, but I was not a fan of the Tien Giang 70% because it was just too sweet at this percentage point hindering the precious cocoa flavours. They also make it in 80%, still holding to its sweetness, this gold award-winning bar (Academy of Chocolate) might usher the not too dark and bitter chocolate lovers into the high percentage cocoa world.
Read more about the distinctiveness of the Marou’s cocoa terroir in an interview with their agronomist Alexandre Parizel.
The only milky chocolate so far is the coconut milk Ben Tre 55% cocoa bar. Local Arabica coffee graces the 64% Lam Dong, while Caramelized Nibs, Cashew Praline, Feuillantine, Candied Ginger, a tamed Candied Chili or Popped Rice are wrapped in the house 65% couverture chocolate. Various European collaborations inspired unique blends folded into customised chocolate bars for each client like the Air France, La Grande Epicerie de Paris, chef Michel Roux, and others.
As with all chocolates if you keep them in the fridge, seal them in a ziplock bag or in other way protect from the other foods. At least an hour before serving, like with cheese, take it out and keep on room temperature.
You can buy Marou chocolate globally in quality driven epiceries, gourmet stores, high end grocery branches like Wholefoods and even tea shops like My Cup of Tea in London. If you visit Vietnam, then linger in the Maison Marou pastry room.
Maison Marou: 169 Calmette street, Ho Chi Minh City Vietnam