Shaved ice is a popular and refreshing sweet indulgence on a hot day in Hawaii. After chasing the twenty plus feet waves in the unsettled winter waters of the Pacific, most surfers cool the heat in their veins from the fearsome adventure by gulping spoonfuls of this delicacy. They get more hydrated through the flavoured frosty water, aka shaved/shave ice, quenching cravings and thirst, both at the same time. 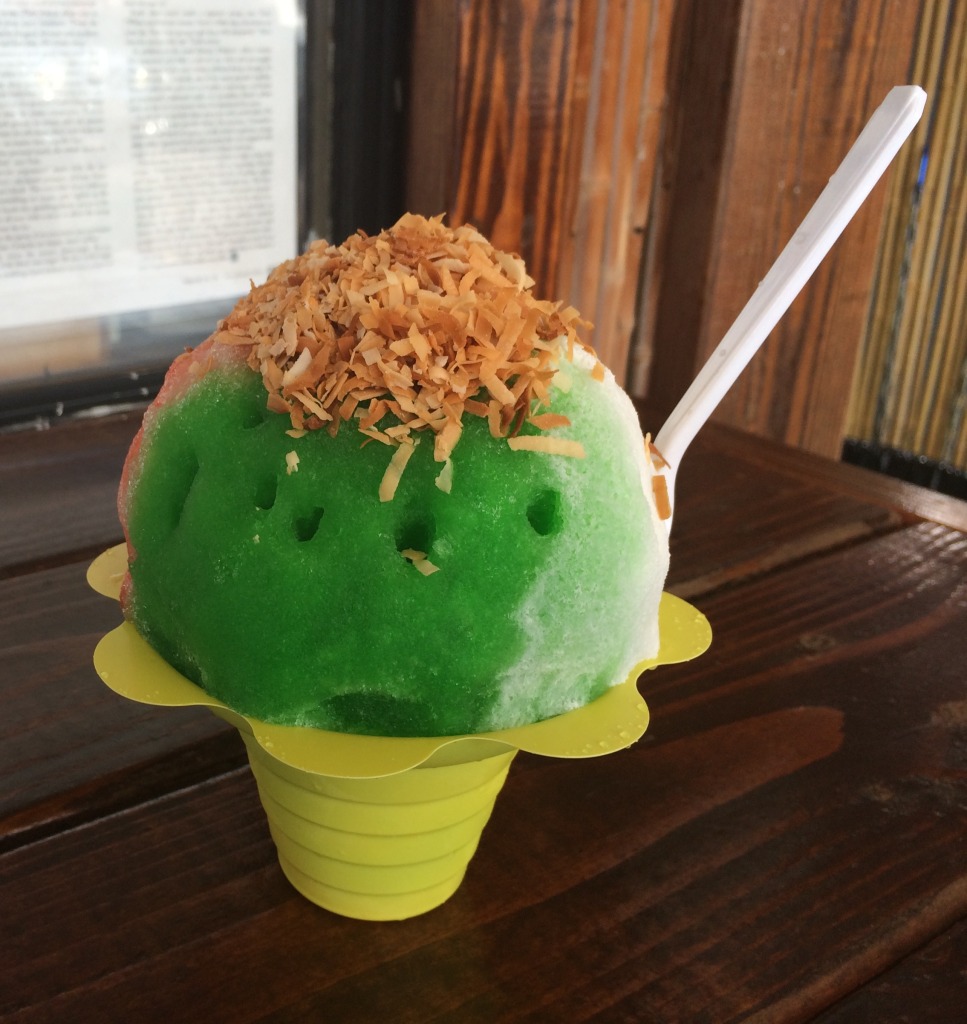 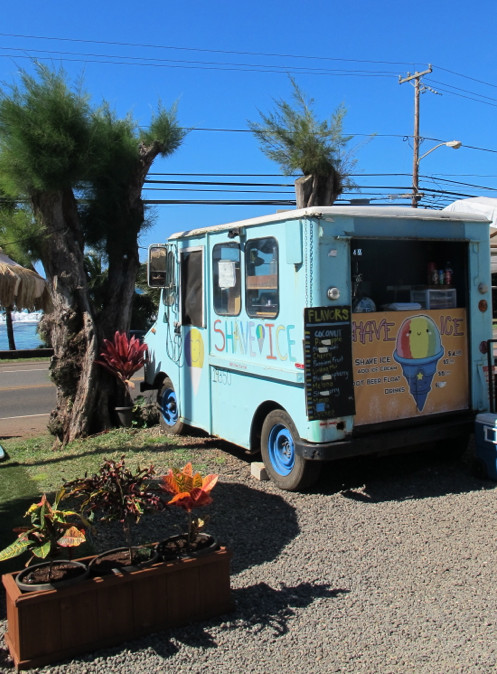 So what exactly is shaved ice? Imagine eating pure snow, it feels icy cold, numbing for seconds, then watery as the substance melts quickly in your warm mouth. This is why it is also known as “snow cone”. The flavours come from adding sweet syrups atop the frosty mass. Most places allow for maximum three flavours in one cone (paper or plastic). Additional crunchy toppings like toasted coconut or vanilla ice cream (dairy) became very popular in Hawaii. The cream flavours have condensed milk pre-mixed into the syrup so they are also not dairy-free. Filtered water is used to make the ice slush. Usually, shave ice is sold at casual street vendors as a take away, but in Hawaii it is offered inside small grocery stores, most still run by the immigrant Japanese families.

Shaved ice is like ice cream, but even lighter than a sorbet. 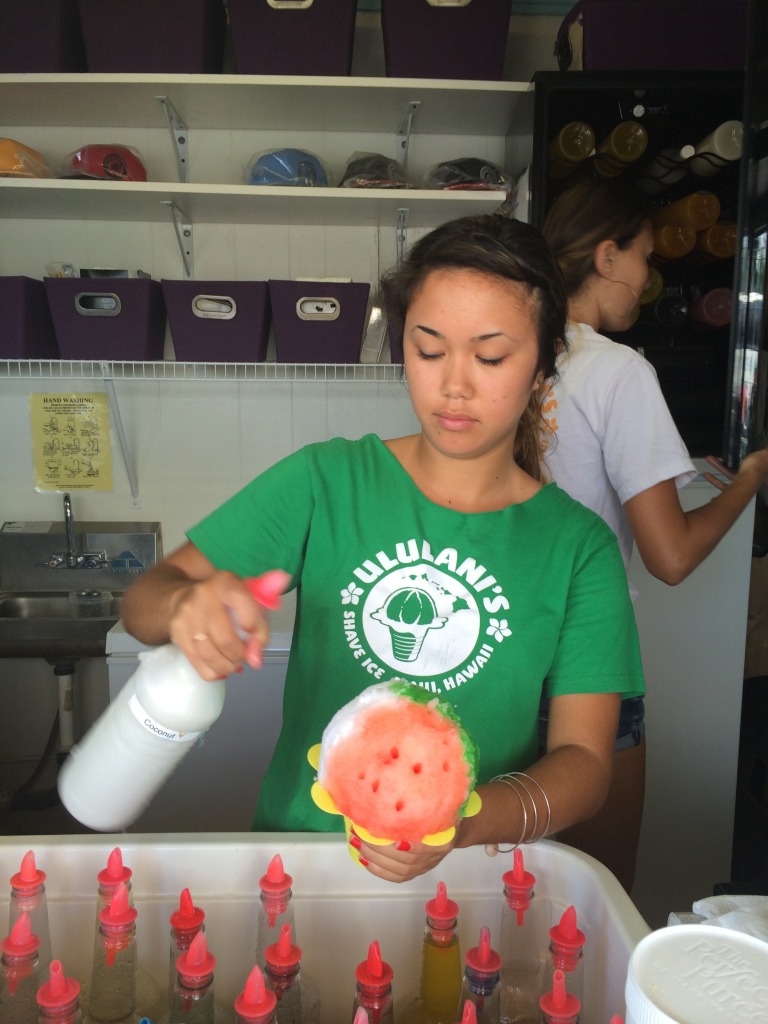 Literally swimming across the Pacific with the Japanese who migrated to Hawaii in the 20th century, shave ice refreshed these pineapple and sugar cane farm workers in the islands’ hot climate. The workers would have it as a special treat on their day off. Shaving from a block of ice with their sharp tools they poured a juice or syrup over that frosty delicacy. Later, as they moved from farms to other businesses, some opened grocery stores, where shaved ice was first commercially sold in the US.
The two most visited islands of the Hawaii string, Oahu and Maui, both hive with shaved ice options today. I have scouted the most popular ones and found my favourite. If you plan traveling to Hawaii, check this review and do not waste your time trying just average spots, go to the best!

Matsumoto Grocery store in Haleiwa, in O’ahu North Shore has always sweet-toothed devotees lined up along its wall on the verge of the coastal highway. Established as a family business in 1951, Matsumoto became such an iconic shave ice brand that now instead of groceries, you can buy bags, t-shirts and other merchandise next to the icy treat. It is always warm on Hawaii, even in the winter when thousands of the world’s best surfers flood the shore, so the cold delicacy sells all year long.
Their reputation reaped a legendary status. Perhaps owing to Matsumoto’s strategic location. The North Shore stages the international surfing competitions each winter when together with the world’s best surfers, cars, buses and planes of big wave tourists arrive to the area. Tipping the waves allure, around the same time the store was open, the late Elvis Presley moved in to the area, so suddenly the Northern strip became attraction with its own merit. 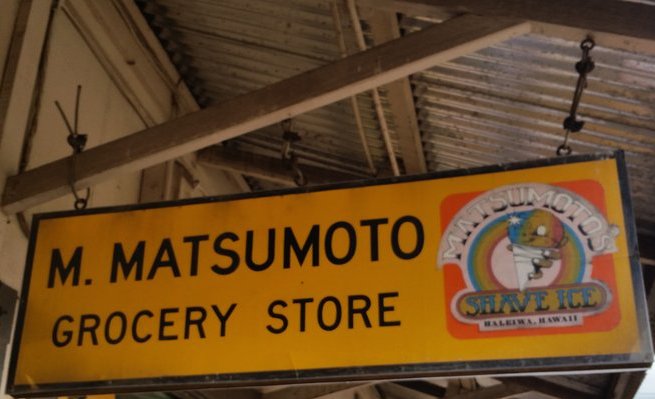 The secrets of the syrup

Although Matsumoto’s syrups are still homemade, most contain artificial colours and flavours, except the Mizore and Lilikoi that are natural. If you are concerned about health, then at any Hawaii “shave” ice store avoid any blatantly fake flavours such as bubble gum, calpico, coca-cola, red velvet cake, café latte, and anything brightly coloured. Also evade the Li Hing Mui, a powder made from tangy Chinese plum that has been pickled and seasoned with sugar or aspartame and enhanced with food colouring. The Yuzu syrup and Vanilla ice cream both contain corn syrup, another unhealthy highly processed sweetener as is Splenda (dextrose, maltodextrin and sucralose) and other artificial sweeteners used at most sugar-free syrups. 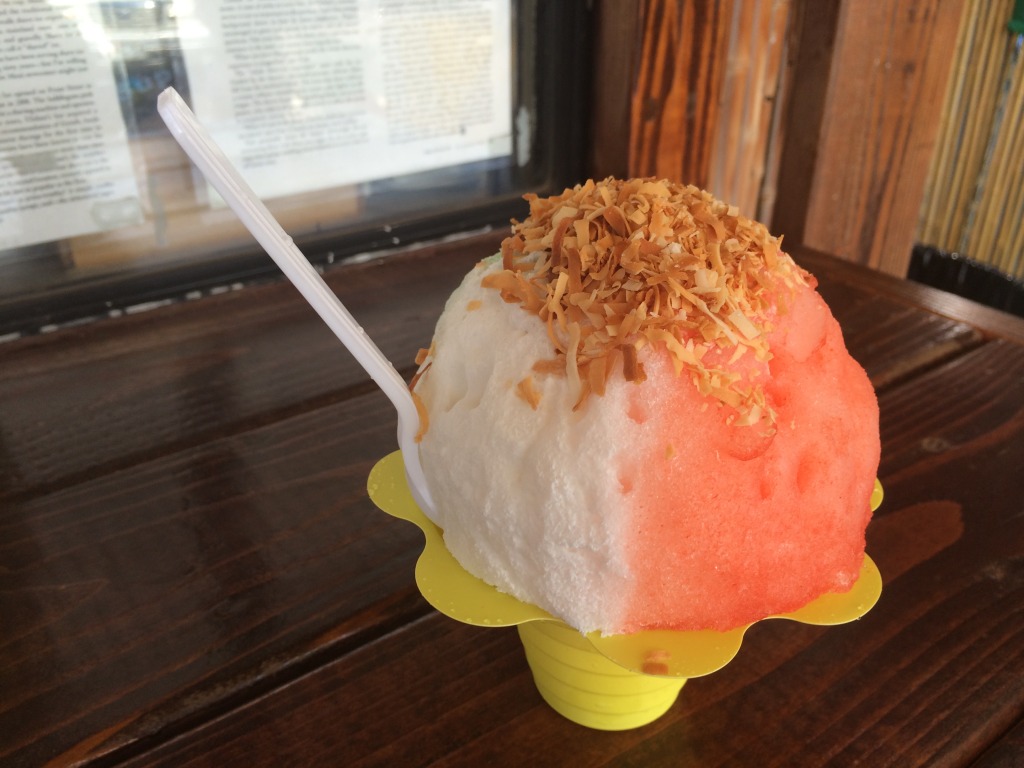 Matsumoto’s shave ice might be the most famous on Oahu, but both Waiola’s and Shimazu’s in Honolulu offer wider choices of flavours. Other shops to note on Oahu are Aoki’s in Haleiwa, Baldwin’s and Ice Garden in Aiea, and Island Snow in Kailua. The last being the favourite of the US President Obama’s, who was born in Hawaii.
Ululani’s shave ice on Maui appeals to my taste most though. After sampling all the top ranking island spots, I found the flavors at Ululani’s the most real, not too artificial, as most often are. Try the local Liliko’i (Passion Fruit), Pineapple or the seasonal Hoku. My personal favourites are Coconut and Mango.
Add-ons include Maui-made Roselani’s Premium Gourmet Vanilla, Macadamia Nut or Haupia (Coconut Pudding) Ice-Cream; Shredded Toasted Coconut or homemade (cooked and cooled) Japanese Azuki Beans.
The most indulgent are Ululani’s Snow Cap (sweetened condensed milk mixture) and Hand-cut Mochi Pieces (soft gooey dough cakes). For diabetics and calorie conscious there are about 10 sugar-free options (Splenda). Otherwise pure cane sugar, premium purees, natural fruit juices and extracts are used. 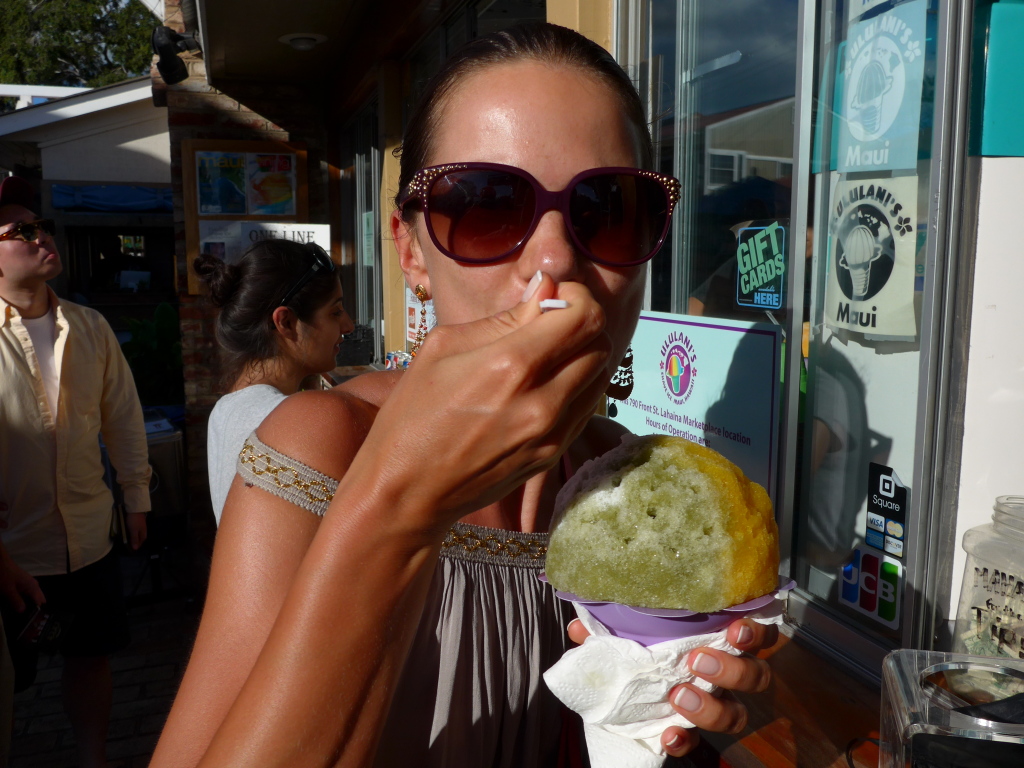 Most shaved ice lovers combine two or more flavours. At Ululani’s Lahaina branch the most popular combo is Pineapple, Coconut, Banana and snow cap (melted vanilla ice cream). I want to fly back to Hawaii just thinking about it!
As I mentioned before, beware of its sugar content since shaved ice is by no means a healthy treat. Although it is perhaps less naughty than sweet sodas since we enjoy them as desserts, not just drinks illusionary of quenching thirst.
The secret of the shave/shaved ice success nests in its simplicity, the fun involved in eating sweet snow with a spoon from a cone. The inventiveness of its Japanese creators was born from necessity to cool down during the hot days on the islands. As a spoonful goes down your throat, you feel the chills. One cannot visit Hawaii without relishing in at least one local shave ice.