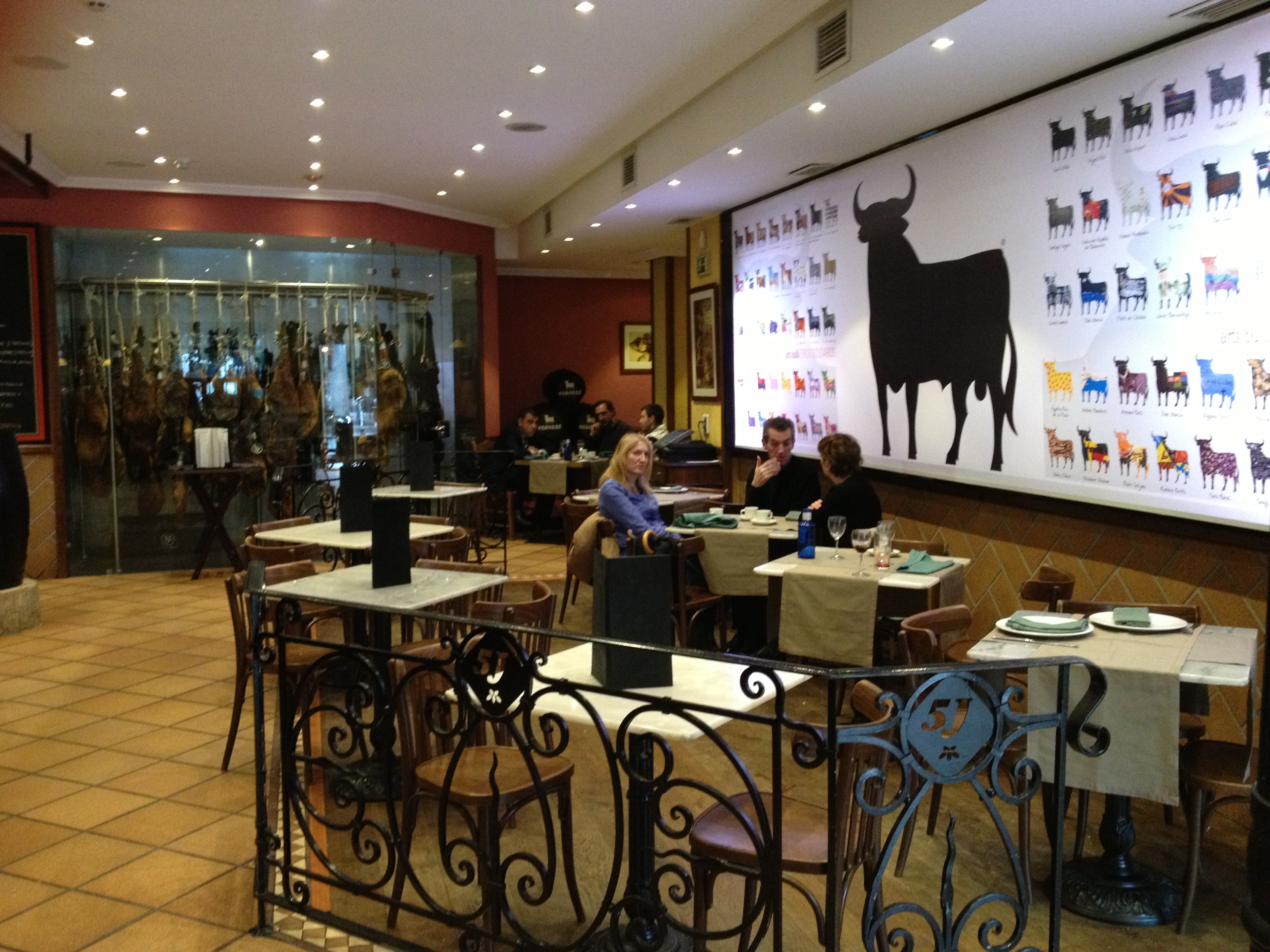 Mesón Cinco Jotas is a success story of a chain of restaurants doing a great job! With branches in Madrid, Barcelona, Seville and even in the Portuguese capital Lisbon it can easily lose track of quality, but this is not the case of the Mesón Cinco Jotas in Madrid as the restaurant/tapas bar is serving excellent and innovative tapas in a modern environment in the middle of the historic part of town.
Atmosphere: Modern, fresh and casual. Sitting between a heard of colourful bulls on one side and real life-size hanging hams on the other you know that you are not dining at a vegetarian restaurant. Meat is omnipresent in most of Spanish tapas places and Mesón Cinco Jotas is not an exemption. Central location attracts many tourists, but locals blend in quite high proportion so I cannot classify it as a tourist hangout. Its casual interior suggests that dress code is not a topic to be worried about, therefore wear anything you find yourself in while browsing the labyrinth of the old town. 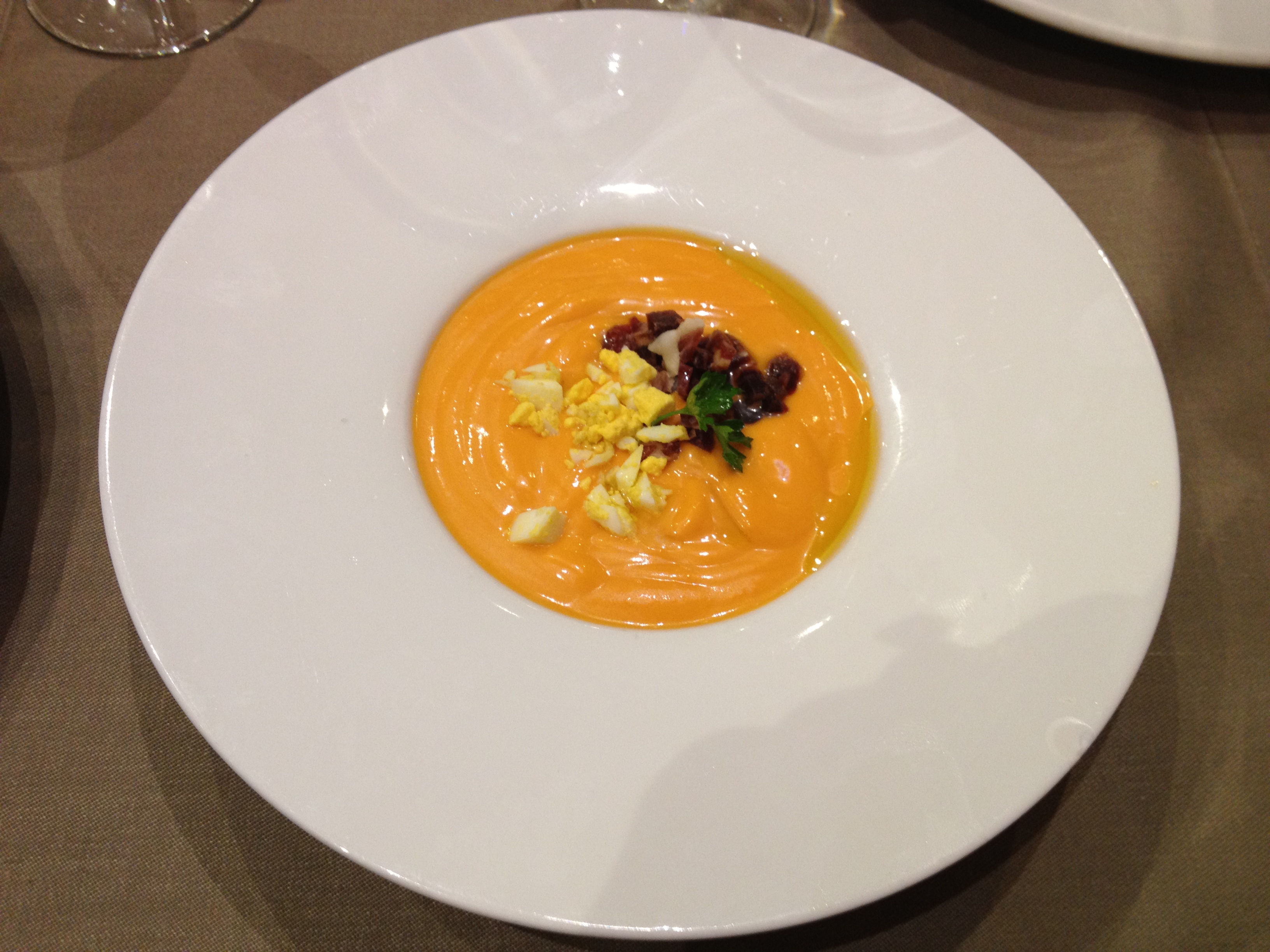 Food: An innovative take on typical Spanish tapas. The plates are rarely simple, with the exemption of fried green peppers with crumbly smoked salt, which are a staple vegetable tapa in Spain. They make them superb here – not too oily, large in size, with more depth thanks to use of the smoked salt instead of the usual white salt. Tortilla (a thick egg omelette) with fresh bread is served before your order comes and it is hard not to eat it all as both are very good. 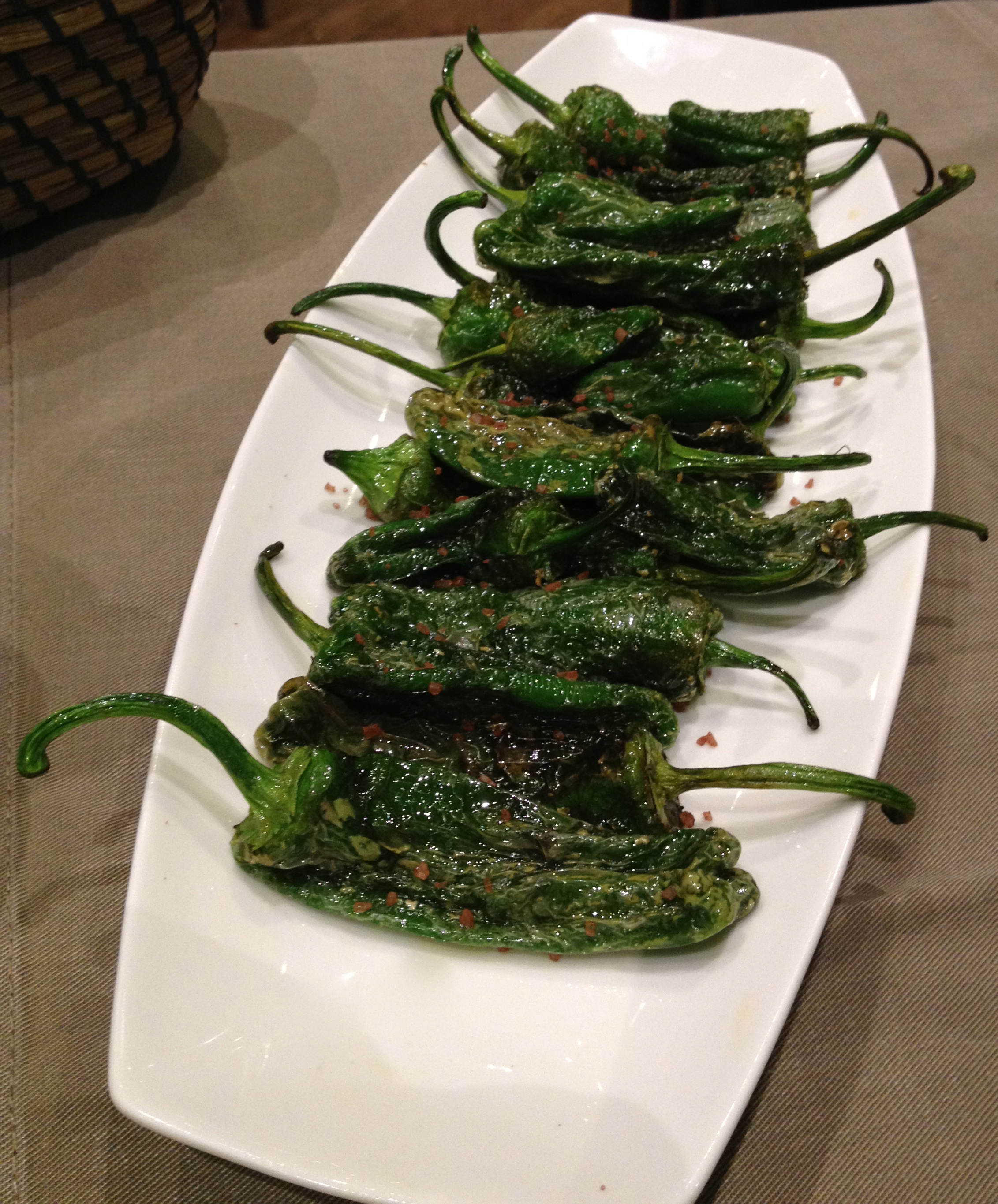 Of course you can also have a slice of Jamon Ibérico, the hard and intense Manchego cheese and other Spanish meats and cheeses, but it is the careful experimentation with traditional dishes that they do so well here, so you must try at least one of their ‘old made new’ plates as well.
Salmonejo is an Andalusian style of cold soup made from tomatoes, bread, vinegar, garlic and oil. It is different from gazpacho since it is more thick and creamy, because of the bread. Dried Spanish Serrano ham and diced hard-boiled eggs are added as a garnish. They must have used high quality tomatoes in this soup as it tasted so smooth and elegant that if too ripe or unripe tomatoes were blended in you would recognise it on the palate. It is very filling as well, therefore ordering a lighter second and third course is a smart choice. 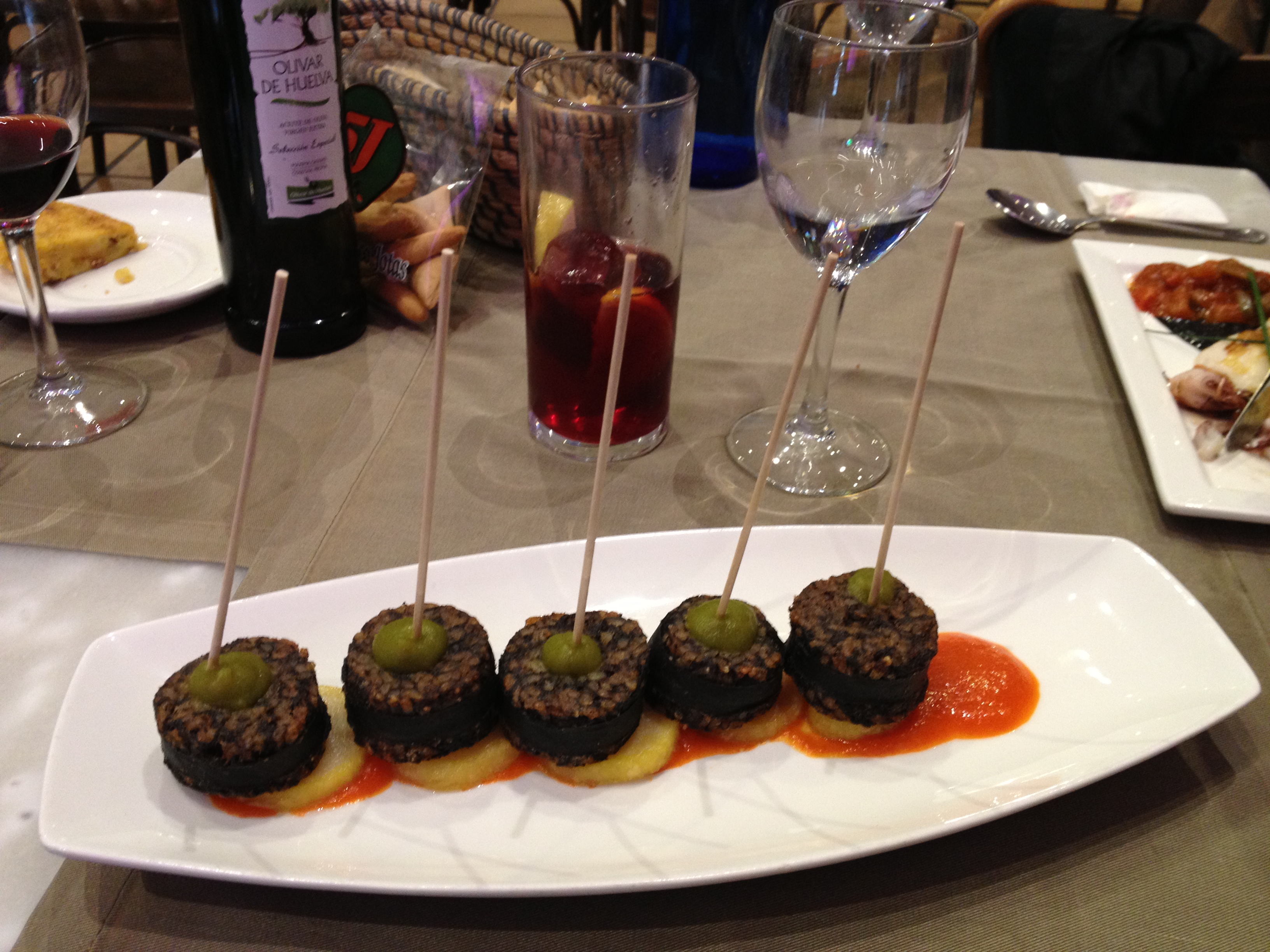 I went through a different way though – the stones-in-your-belly feeling after your lunch requiring a long siesta dining style. I could not resist trying Morcilla, the Spanish take on a slightly spicy blood sausage. A great risk paid off. The Morcilla served on a red pepper puree, full moon-shaped potatoes and topped with a green olive cream dollop was superb! One of the best I have ever had. The ingredients freshened it up and calmed the racy flavours of the blood sausage so each bite fashioned almost a yin-yang taste of harmony.
My friend got Grilled squids and she was also impressed by her choice. Gently grilled, not burned or undercooked, sharing a plate with a vegetable ratatouille and the squids’ own black ink sauce, the dish looked not only gastronomically seductive, but it also tasted very good as my friend confirmed. 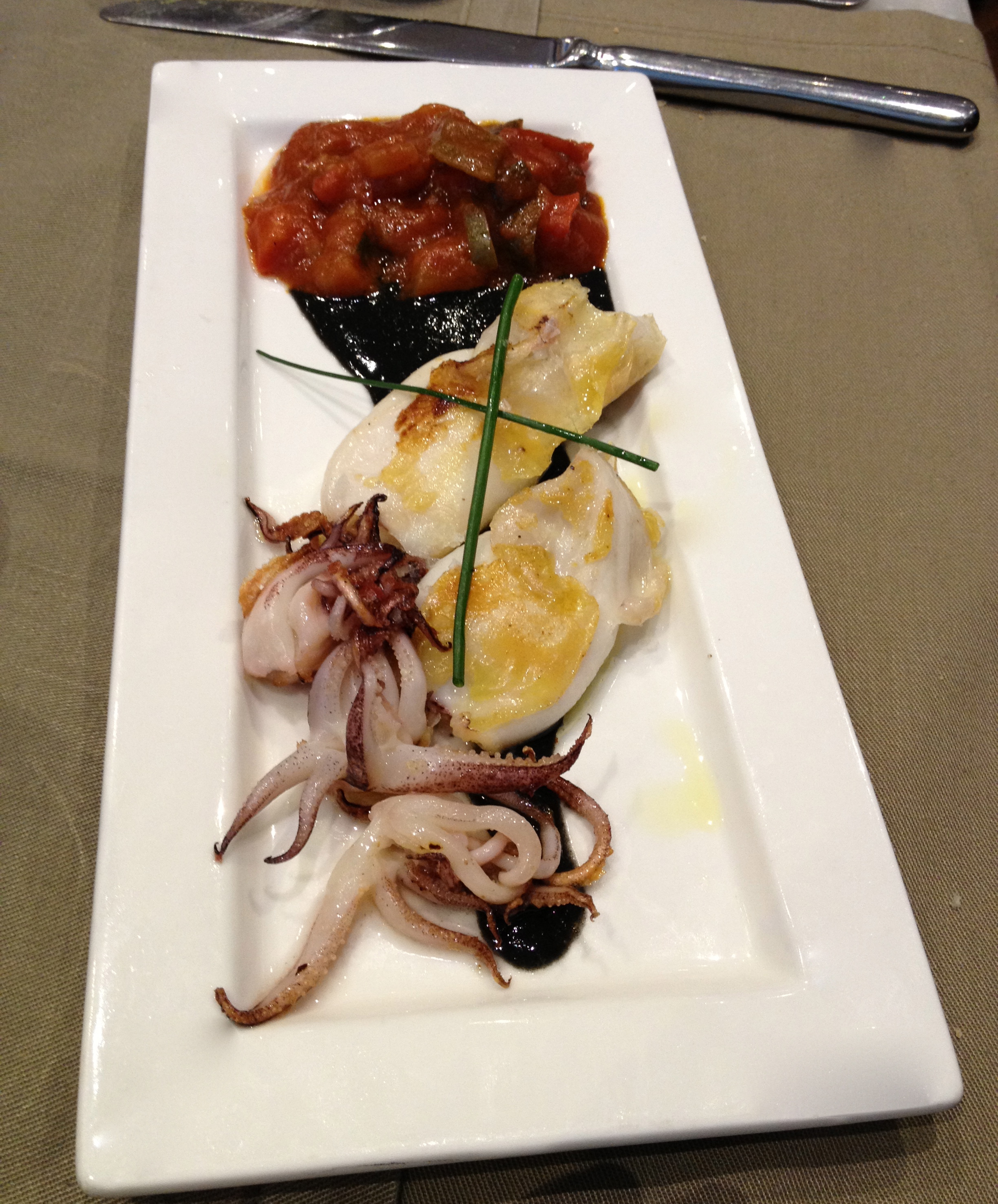 Cuisine: Contemporary Spanish tapas.
Visit: November 2012
Price: Medium (for the quality and quite generous portions this a very good deal in central Madrid).
Drinks: Wines by the glass or “una copa de sangria” (a glass of sangria) are an option for light drinkers. I had a glass of red wine that I did not like much so I ordered a glass of sangria that was lighter in alcohol than I am used to and therefore ideal for lunch. They have Spanish wine list that is not super extensive but covers many regions of Spain with at least one example.
Address:
Plaza de Santa Ana, 1; Madrid 28012, Spain
Contact: Tel: +(39) 915 22 63 64

Casual, buzzing, local. El Rocio is a local secret, although it might attract some tourists that got a great tip from their Spanish friends to eat there. Overall though it is very local and unpretentious. Its location in the central barrio Salamanca in Madrid is convenient as you can pop in between browsing the Madrid’s sights or just before or after going to a cinema. The staff os super friendly, effective and speaks some English so no worries about getting something else then you ordered. 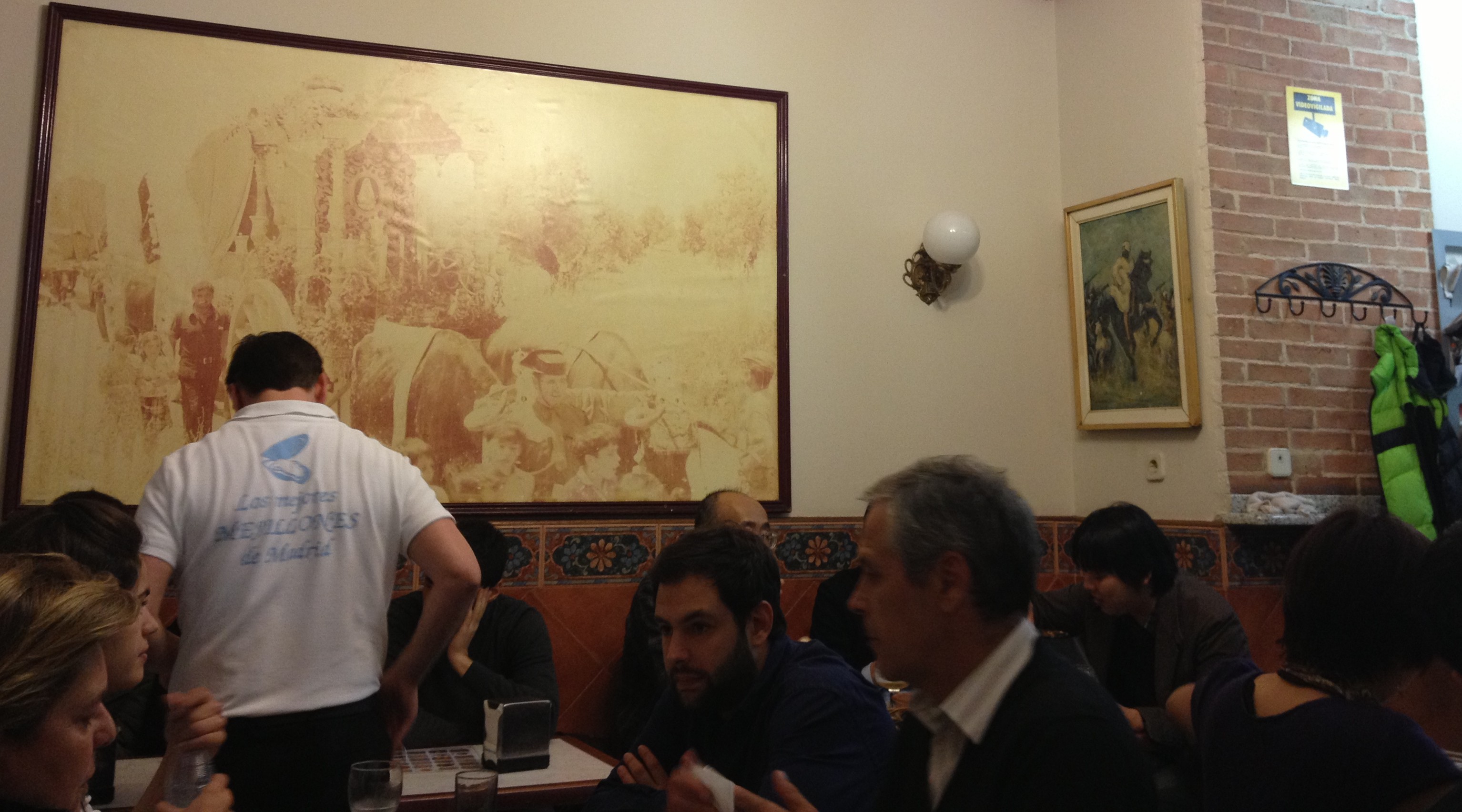 Food: Casual, honest and excellent quality of the ingredients. Many lucky seafood eaters who know, come to El Rocio regularly and order just the mussels (in Spanish: mejillones). Once you see them, you will understand why. Yet, it is not only their size that impresses many of the constantly returning seafood lovers, these mussels also taste wonderfully! Juicy, sumptuous, delicate with a mineral salty touch from the sea … a glass of a refreshingly aromatic white Albariño (wine from Norther Spain) … a group of nice friends – equals a heavenly time out perhaps not just for me. Usually they are served in a spicy broth, but you can ask for a non-spicy version as well if you are not a fan of too hot food. 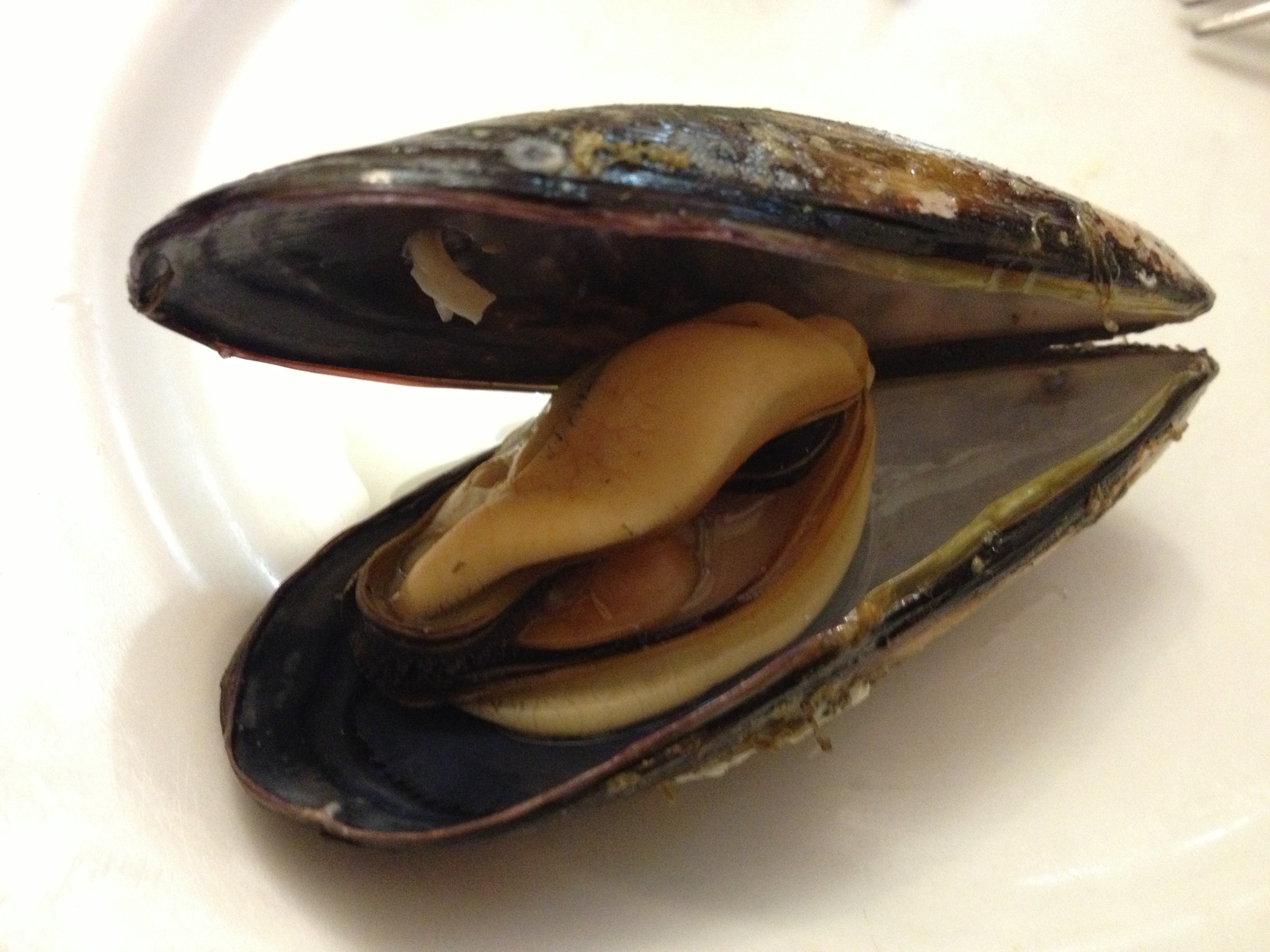 After eating a pot or two of such marvellous mussels, you might feel like switching to something simple and different. A plate of fried Spanish green peppers with flakes of crunchy salt goes well not only with a pint of beer, so popular in Spain, but almost any white wine such as the Albariño. The later does a great job balancing the oily texture of the fried veggies. 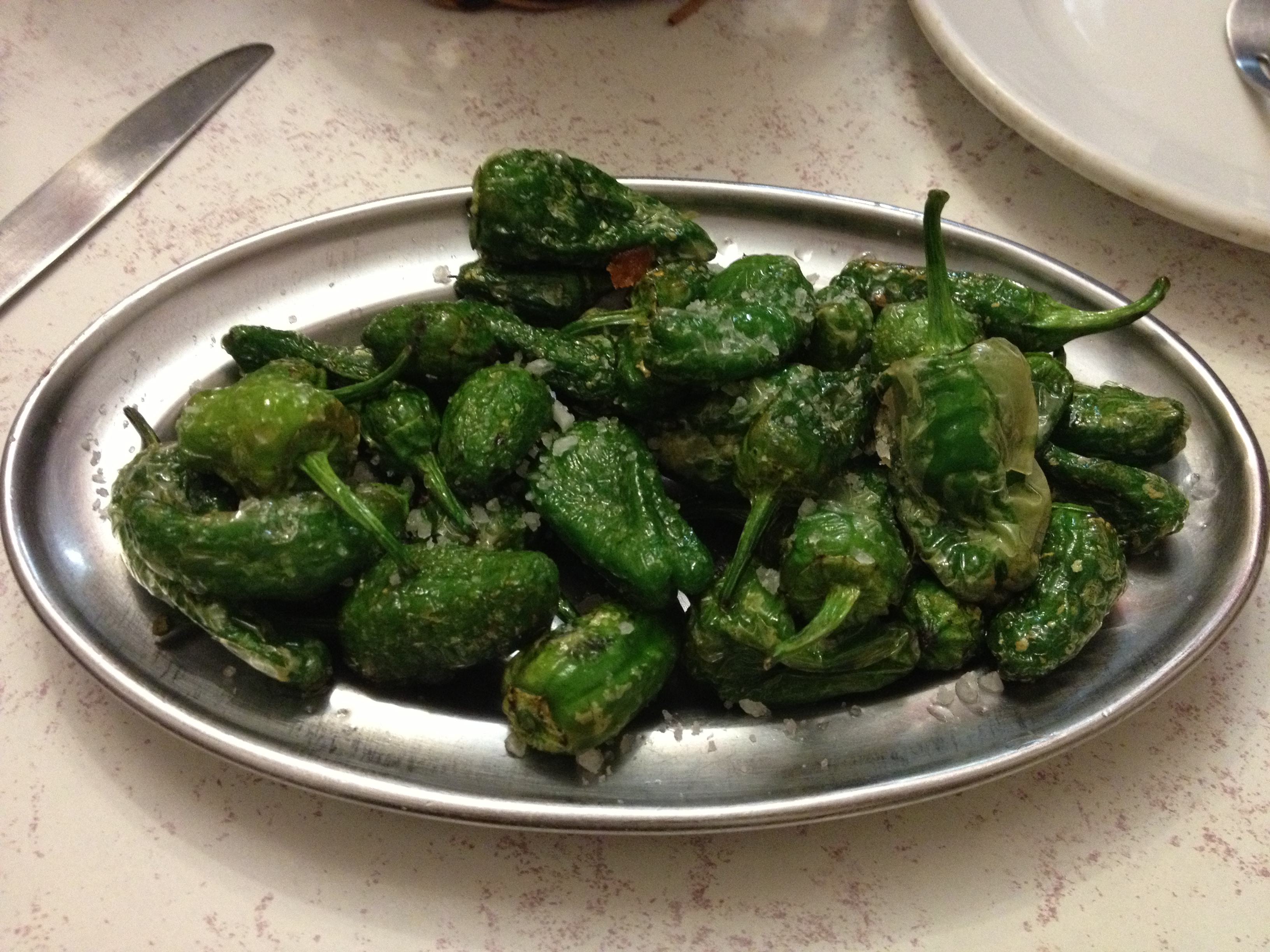 Other tapas such as fried onions, squids and other seafood are optional, but make sure you do not miss out trying possibly the biggest mussels ever in this casual setting right in the centre of Madrid. It is an ideal spot to get a quick bite before going to the cinema, night club or at any time you feel like having a plate of honest seafood. 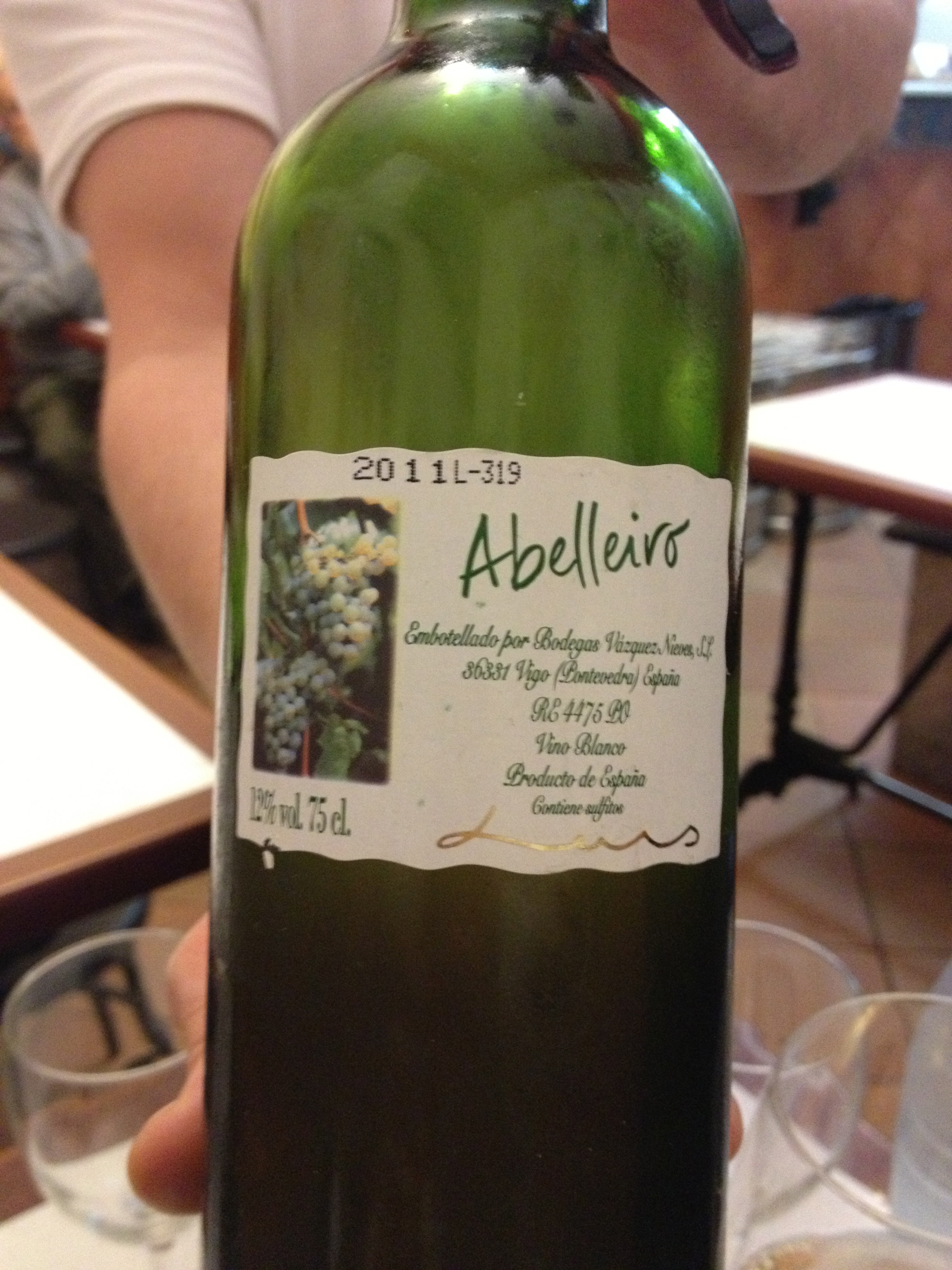 Cuisine: Spanish seafood
Visit: November 2012
Price: Medium to low (great value for money for the quality you get).
Drinks: From sangria, beer to great value for price/quality wine you can drink anything that will not ruin your wallet while enjoying the taste. The drinks mostly suite well to the tapas style seafood served at El Rocio.
Address: Pasaje Matheu 2, 28012 Madrid, Spain
Contact: Tel: +(33) 91 523 31 93 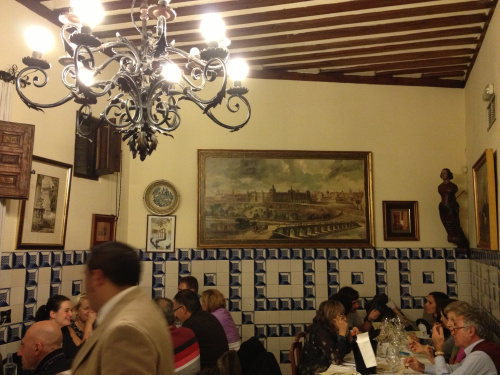 Restaurante Sobrino de Botín (for a long time it was a tavern since restaurants were rather fancy Parisian style establishments in the period Botín was opened in the 1725) has a long history spanning almost over three centuries. Today it is known under the name Sobrino de Botín meaning “Botín’s nephew” and it was coined by its second proprietor – a nephew of the Botíns Candido Remis, who took over the restaurant after they died without any direct descendants. This happened after the once ‘to-become-famous’ painter Goya was employed at Botín as a dishwasher to make money for his studies at the Madrid’s Academy of Arts. Goya was not the only famous personality connected to Botín as plenty of Spanish and non-Spanish writers including Ernest Hemingway frequented the restaurant. Its fame might have saved it from closure over the centuries as it happened to many other great yet not historically interesting restaurants.

Atmosphere: Traditional, welcoming and although the restaurant is very touristy it feels more like a huge grandmother’s house with all the old decorations and tableware surrounding you. The food comes surprisingly quickly after your order and all the staff we encountered was helpful and pleasant. If you don’t master Spanish language though turn to one of the English-speaking waiters. Dress casually as this is a very local place (although full of curious tourists). 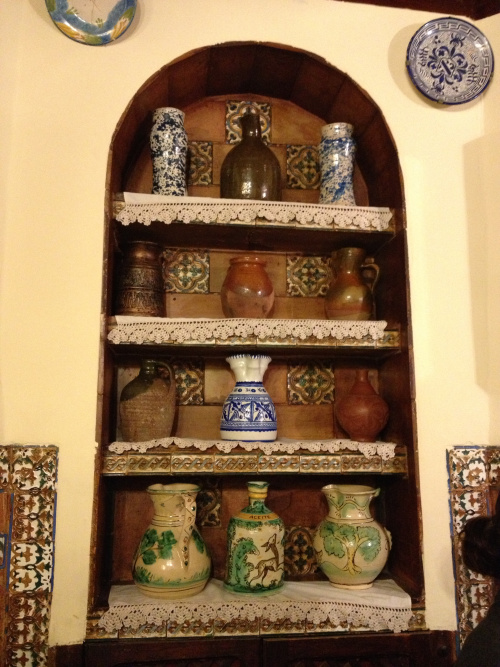 Food: Authentic (unpretentious), generous and diverse. You can eat light getting the Salad Botín (Enslada Botin), although it was not very interesting just a mix of meats, average veggies and olives or a much better Segovia style big mushrooms (Setas a la segoviana) sautéed with olive oil and Spanish ham. Many visitors though come here for a feast as the whole Roasted Suckling Pig (COCHINILLO ASADO) is the restaurant’s speciality. For this dish you need at least another diner to help you with it as it is too big for just one person (unless you have not eaten for days). Roasted Baby Lamb (CORDERO ASADO) is another meaty signature dish at Botín. Both are slowly roasted in the old wood-fired oven. 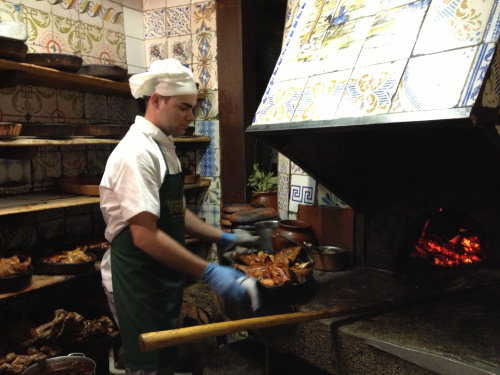 From the starters I tried also the Roast Red Peppers with Codfish (Pimientos asados con bacalao); which were a bit too oily on their own to my taste, but otherwise quite nice. Soaking a sliver of freshly baked bread in the olive oil with peppers was a perfect solution making this dish more palatable. The menu also offers one of my favorite Spanish starters often served in a tapas size – Black Sausage from Burgos (Morcilla de Burgos), but you must like black pudding (cooked pig’s blood) to really enjoy this dish as some people roll their eyes just hearing what is inside.

Botín offers also non-meat mains. I can recommend both the Grilled Prawns (Langostinos a la plancha) and Baby Squids in their own Ink (Chipirones en su tinta) served with rice. The seafood is well cooked and of a good quality. The Baby squids have a plenty of ink so your plate will be black like coal, white rice balances the intense taste of this dish, that is often served as a risotto in many Mediterranean countries.
You are in the Spanish capital so the menu cannot go without egg dishes, so popular not just in a tortilla with potatoes or scrambled eggs for a breakfast, but also in a Tortilla de gambas (Omelette with Shrimps) and local take on scrambled eggs for lunch or dinner as at Botín. Vegetarians in particular will appreciate one of these egg dishes. 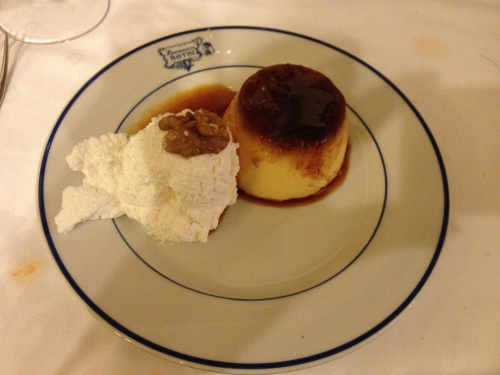 The Spanish love desserts and the choice at Botín is wide. I went for the traditional Homemade Crème Caramel – Flan de huevo con nata, which was very intense eggy custard with a warm caramel topping. It was so sweet that I was thrilled by the scoop of delicate whipped cream served on the side bringing down the sugary nature of the flan. A glass of juicy red wine or a cup of strong coffee is another great helper balancing the extremes of the sweetness from the dessert with refreshing acidity from the wine or coffee.
My friend took the Hot Apple Tartlet – Tatleta Templada de Manzana. She was impressed by its crisp dough with juicy apples on the top. It is one of her favorite types of desserts thus she is the most credible critic judging it from her frequent encounter with the apple tart. 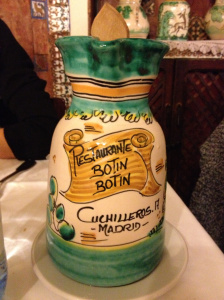 Cuisine: Traditional Spanish Castilian cuisine.
Visit: November 2012
Price: High for Madrid (although portions are generous), medium in the Western countries measures.
Drinks: It could not be a traditional Spanish eatery if they have not been serving Sangría. At Botín they serve it in a hand-painted pitcher (you can get also a 1/2 Pitcher) and it is not too strong, rather fruity. I went for a glass of House White (Verdejo) and later Red (Tempranillo) wine that was very good. Rosé by the glass is also available.
The wine list specializes in Spanish wines from diverse regions such as Ribera del Duero (from more affordable wines such as from Arzuaga and Bodegas Protos to the highly priced Vega Sicilia Unico Gran Reserva), popular and enjoyable wines from Rioja, fashionable D.O.C. Priorat (Alvaro Palacios Vendimia), but also local and very reasonably priced wines from Castilla La Mancha.
Opening hours: Mon-Sun: Lunch: 1pm–4pm; Dinner:8pm–12am
Address: Calle de los Cuchilleros, 17 (near to Plaza Mayor); 28005 Madrid, Spain
Contact: Tel: +(34)913 66 42 17; +(34) 913663026 or book online.
* Sobrino de Botín was recognized by the Guinness Book of Records (the 1987 edition) as the oldest continually operating restaurant in the world. It was established in 1725.