Monsaraz is the walled in triumph of a fiercely battled past. Reaching deep into the abyss of conquest, the prehistoric settlement had imprinted pagan whispers in the megaliths crumbled like galactic sermons across the rocky region. Later, Christians, Moors, and the Knights Templars, all stamped their presence on this Iberian hilltop phenomenon. Circling the hilltop parish in a defensive pose, the walls survived millennia of domineering desires. 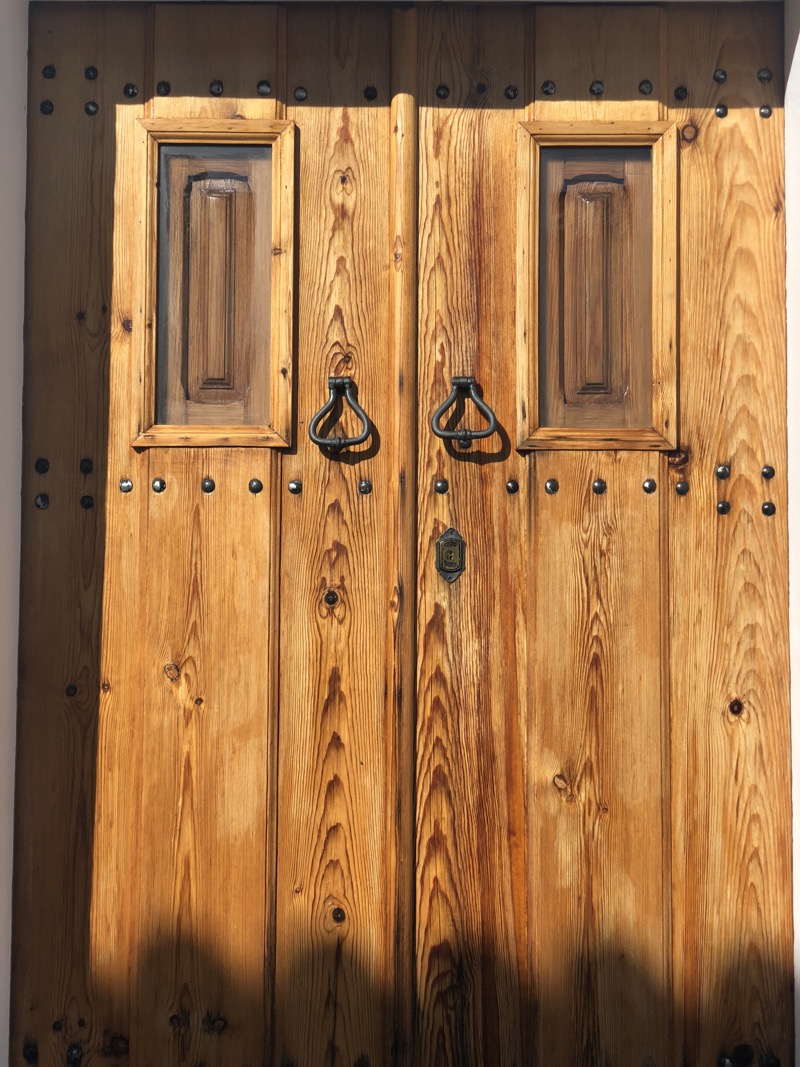 Car-free, Monsaraz is the UNESCO heritage contestant for the prettiest tooth-white village in Portugal. It is like a Greek village with a longer history. Enter through the Porta da Vila to rub your feet with the keyboard of hardy stones that as if someone played an impromptu jazz set, crooked, spiking up and down, edge against your soles. Stopping by the wall or climbing up to the remains of its Castle, your fingers can literally touch Spain as you point over to the glistening and expansive Barragem de Alqueva reservoir. Not just a game-changer for Alentejo, but it is also the largest manmade ‘lake’ in Europe. Sailing, paddle boarding, and boating in summer turned the borderline reservoir into a recreational hotspot. A plus and a bummer at once. 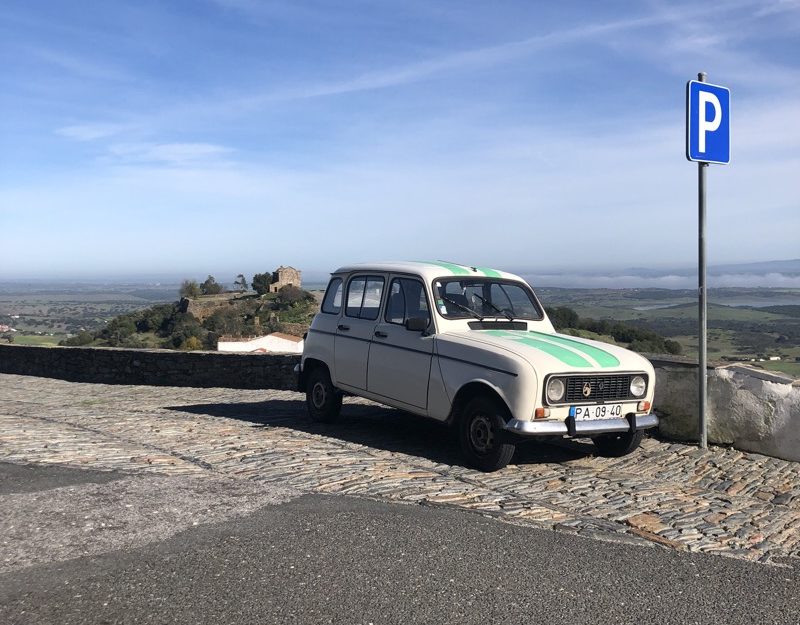 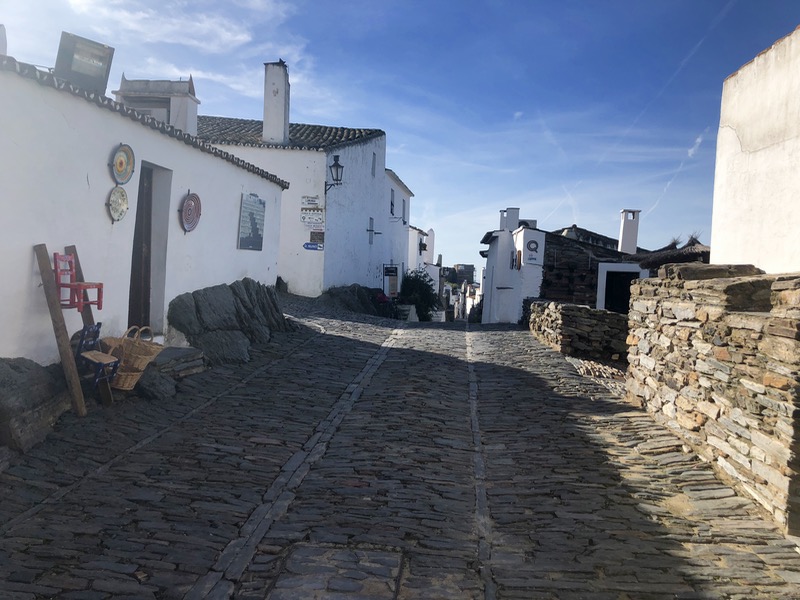 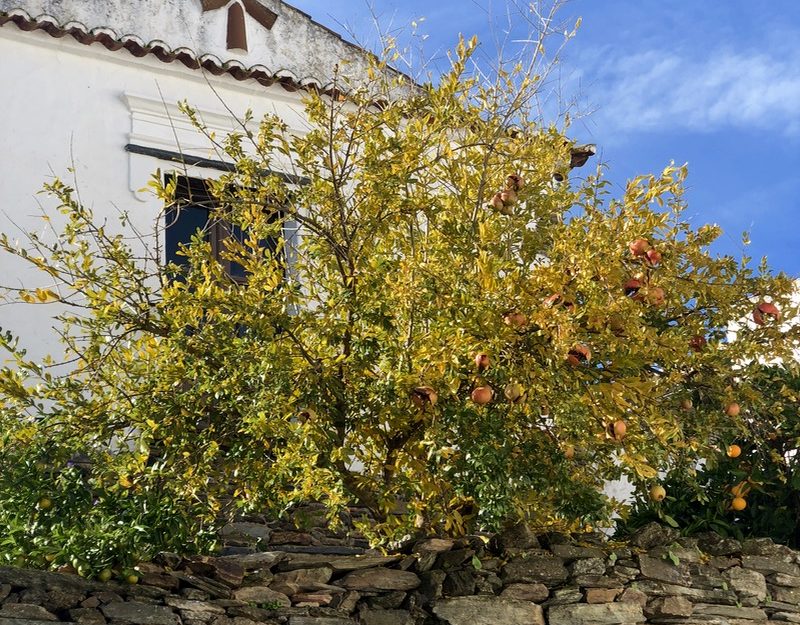 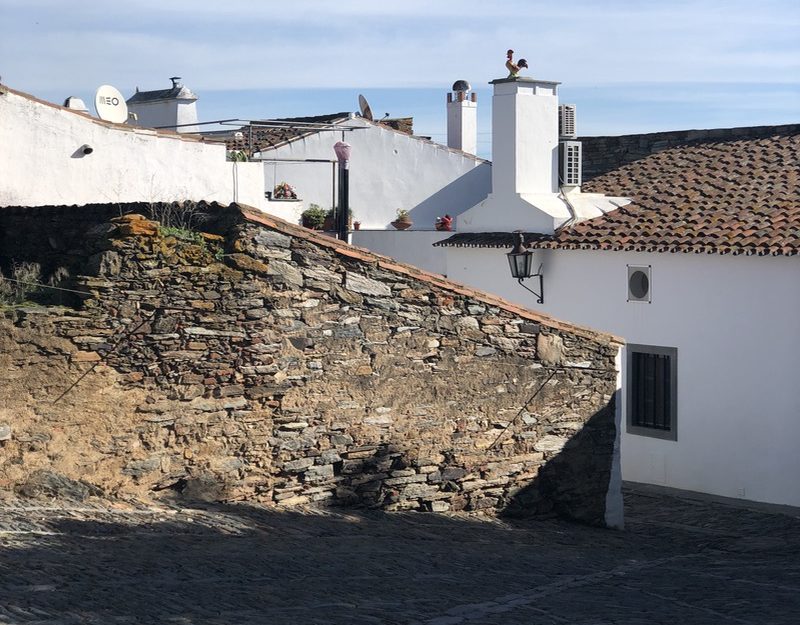 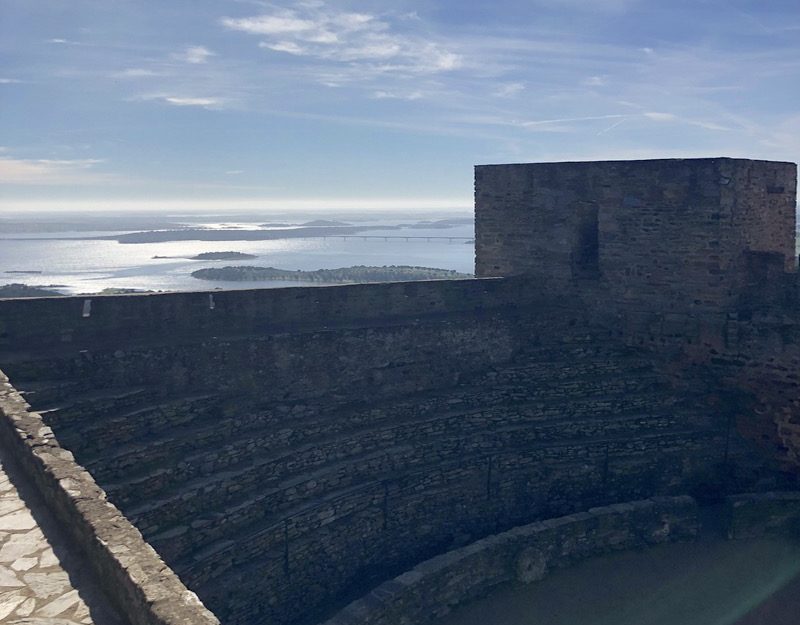 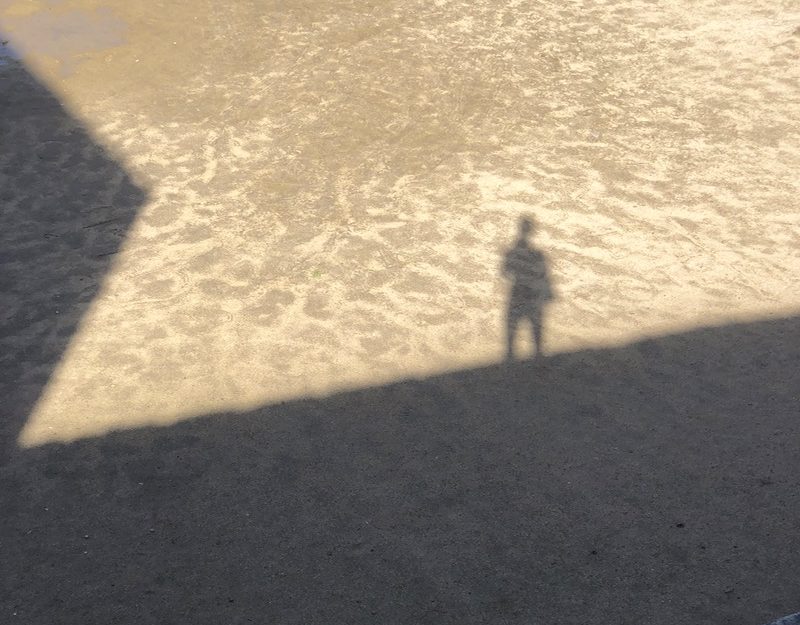 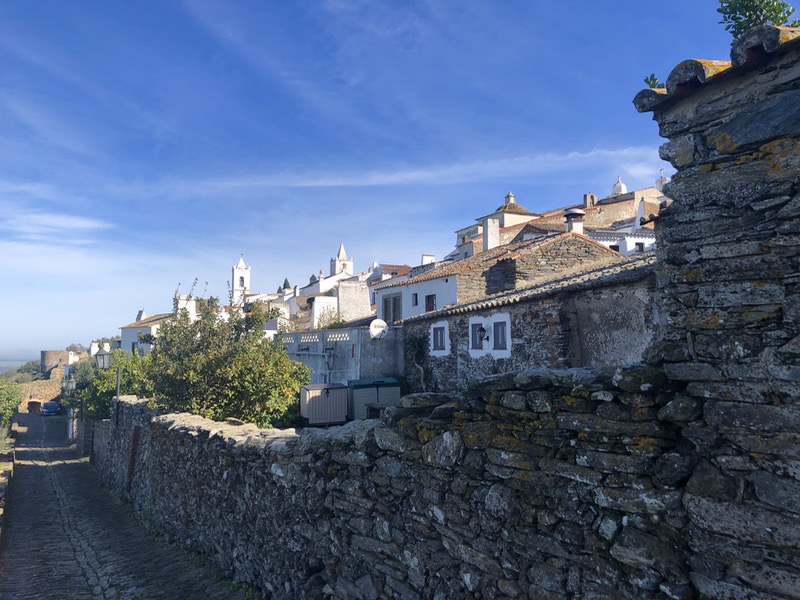 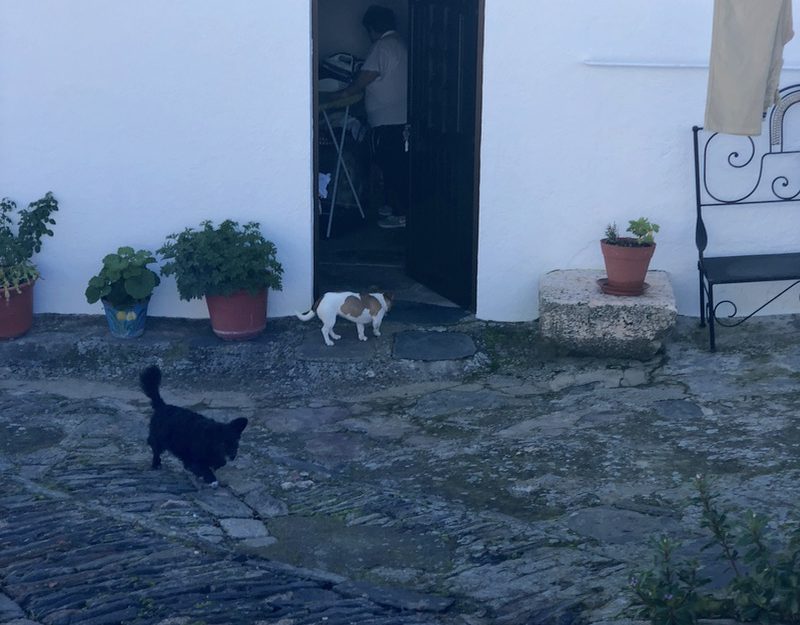 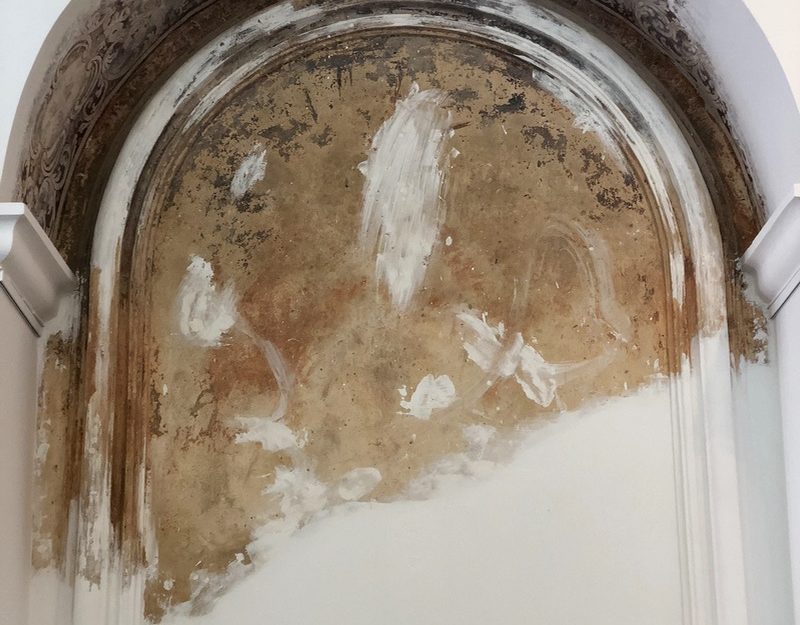 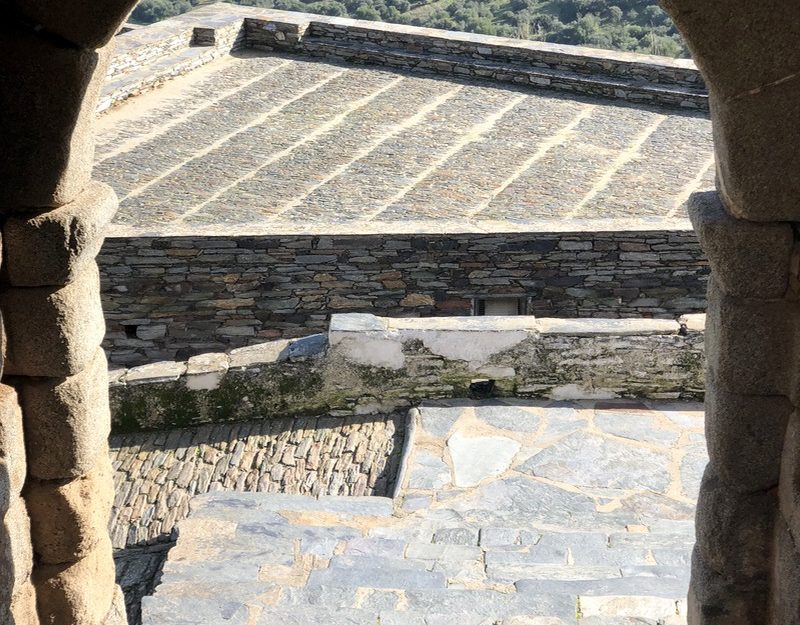 The fascinating doors in Monsaraz emblem each house with a unique pride that keeps you wondering – what inspired the choice of horse shoes, why the sword, the dachshund with a cow’s head? The female hand on the door knob looks elegant, but the rest must be related to the livelihood of its inhabitants. In Monsaraz, roosters halo the chimneys, pottery and flowers dot the window rims, and pomegranate, orange, and other, distinctively local flora decorate the painterly village. 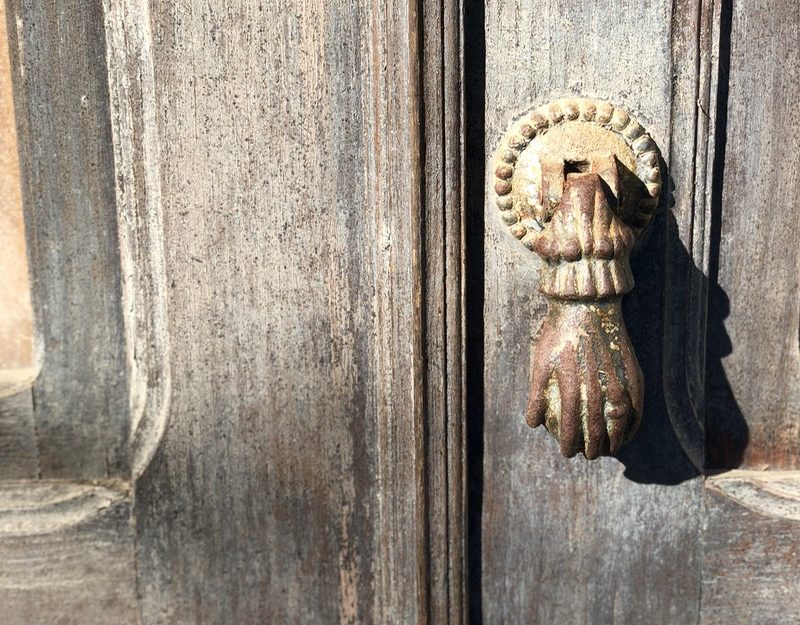 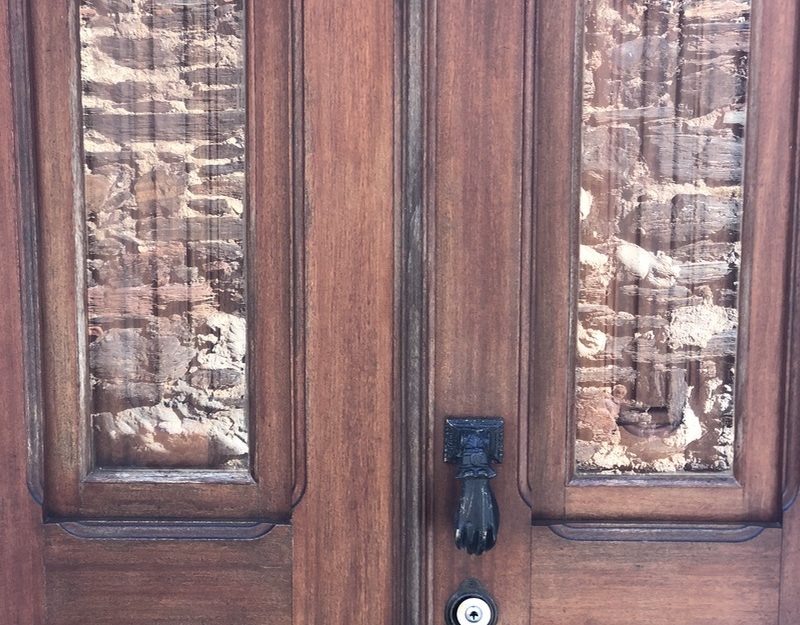 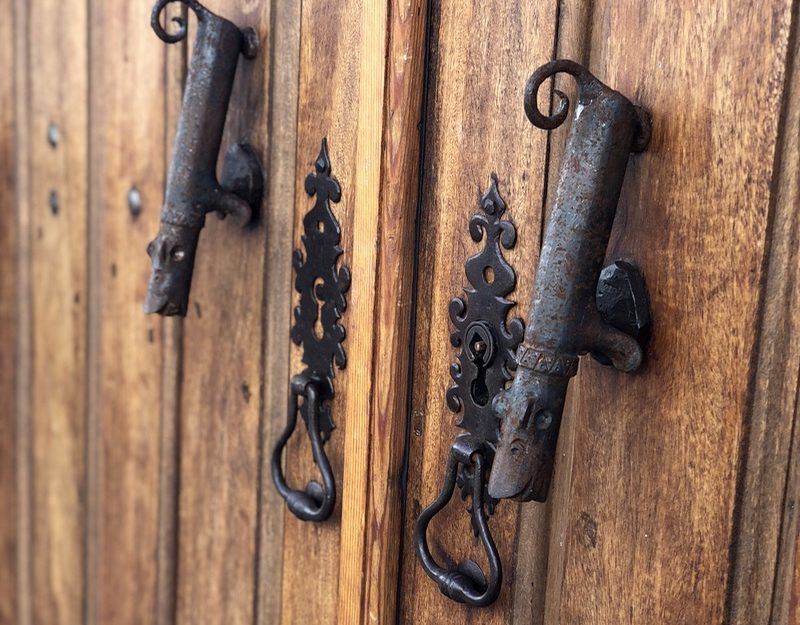 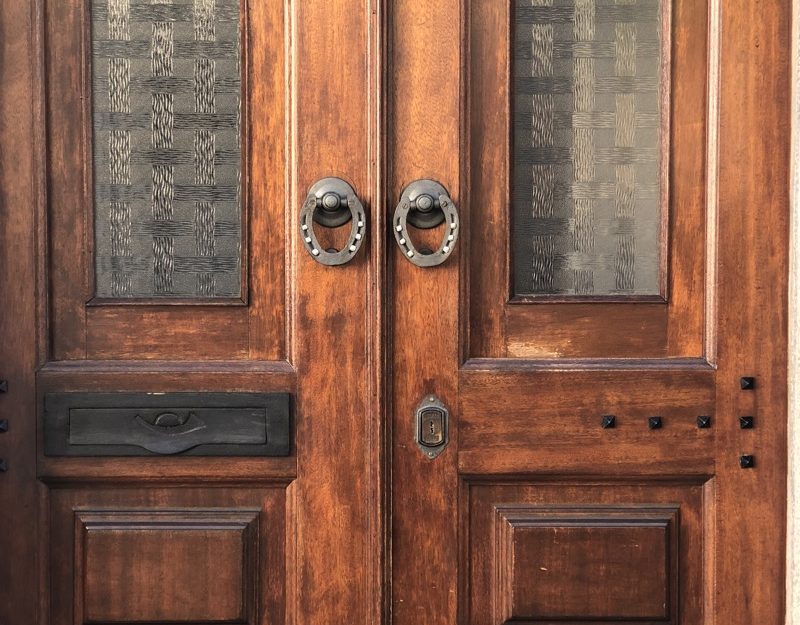 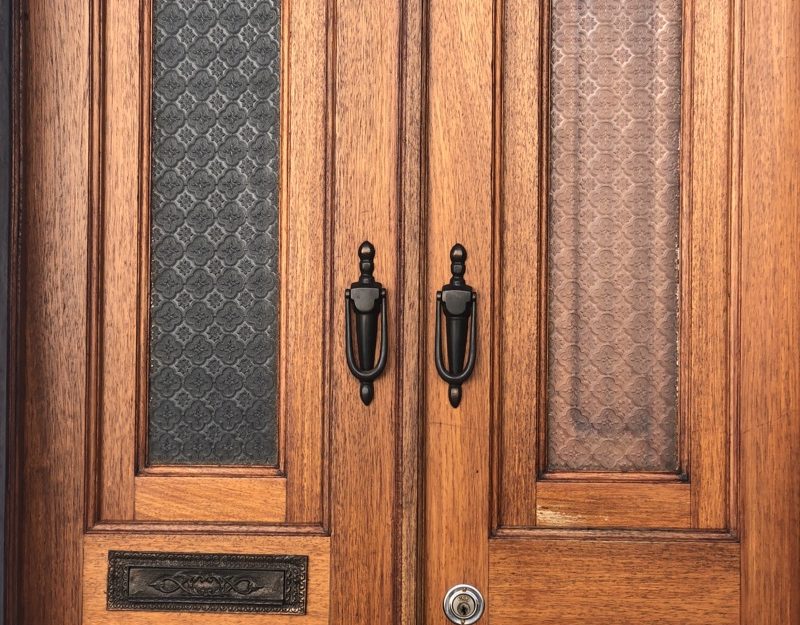 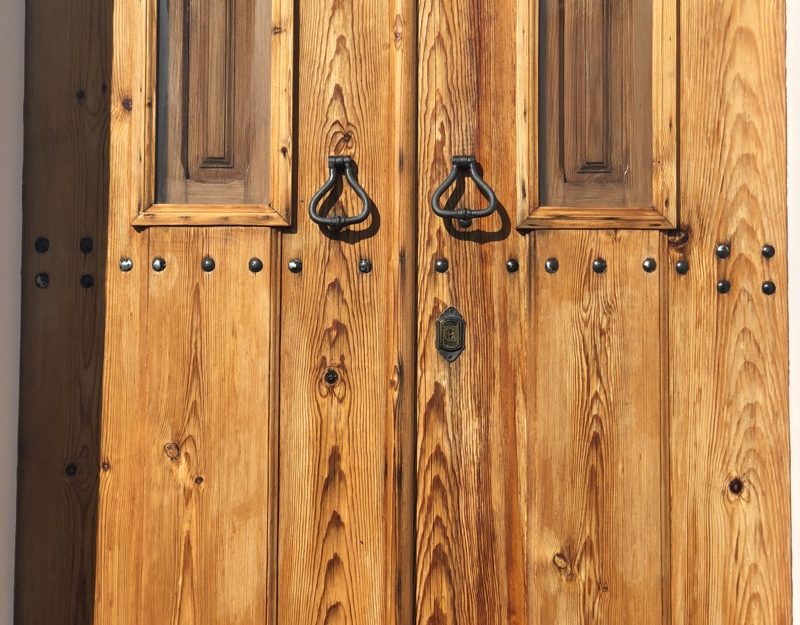 The charms of Monsaraz

The frames of the white houses, the wrought iron balconies with pelargoniums hanging down in all shades of red are matched by the ochre of the brick roofs. Monsaraz is pretty by all accounts. Enter the 16th-century Igreja Matriz and the mood instantly changes. The church feels like a deep cave in a bright blue sea. The edifice shields Monsaraz’s darkest public space. My positively-tuned self much preferred a small chapel hidden from the main paths. Repainted with respect to its original frescoes it now houses contemporary local art. In the saintly named surrounding villages, such charming catholic chapels, walled in convents and opulent churches are still the social hubs of local gossip and worship. The tow somewhat go along. If you like hand-painted ceramics then visit also some of the 22 potteries in the nearby village São Pedro do Corval. 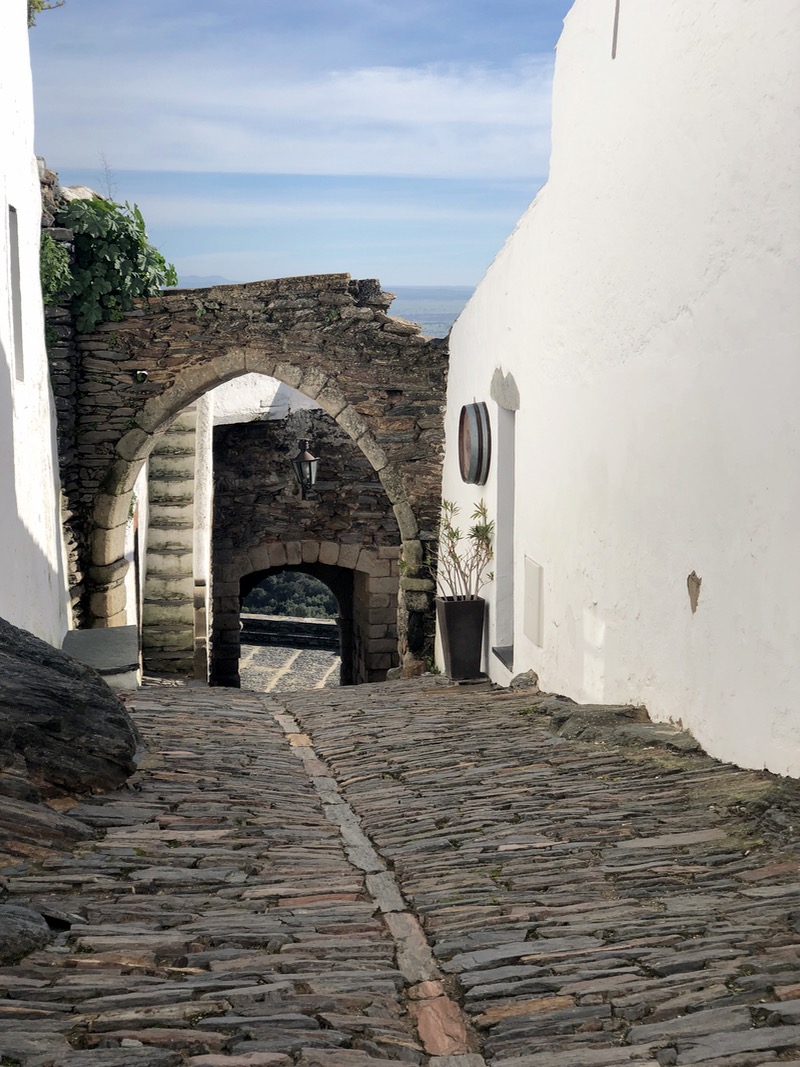 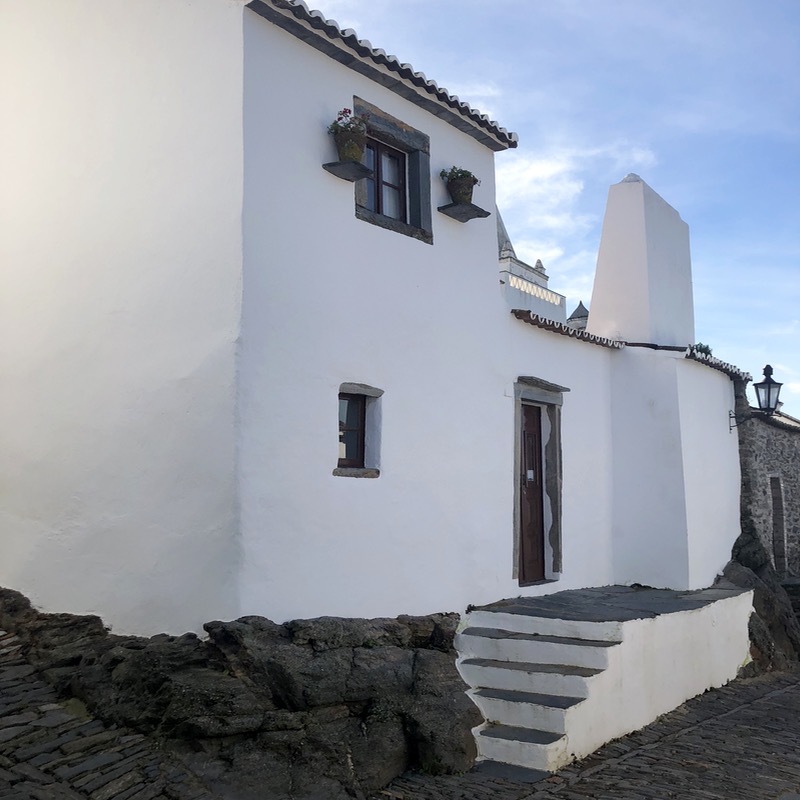 Come in fall, winter or early in the spring. Skip the herds of visitors that brave the heat spiking towards the 50 degree Celsius longitude of mercury. Not that it is just dessert hot, the crowds spoil the experience. On the last Sunday of every month a flea market, then in September and on Easter the bull-fighting season draws in thousands of visitors. In the tiny, narrow patched village this December only four people joined our bumpy promenade on the cobbled fangs that bleed your thin soles. Wear hardy shoes, otherwise you are screwed.
The Japanese revel in such rusticity and particularly in the hand-woven wool carpets by Mizette Nielsen. In the trendy boutiques of Lisbon you pay double for her pieces. In winter the craft shops do not hive in throngs of photo hunters, it is all yours! 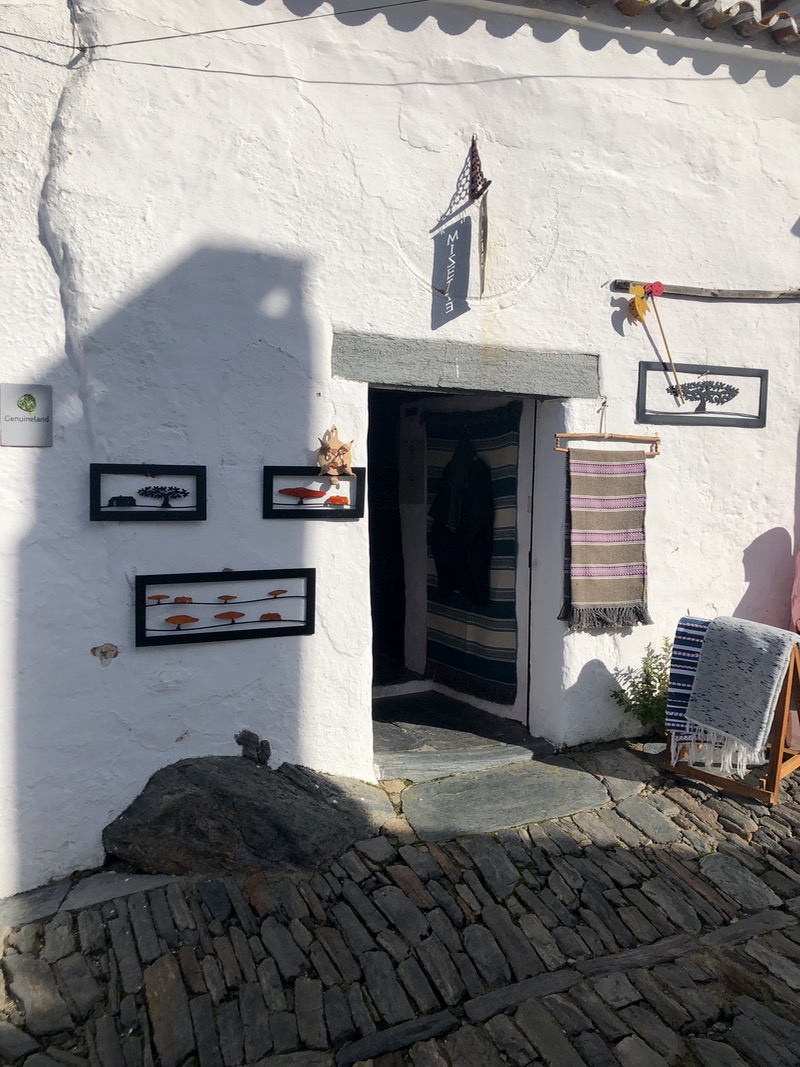 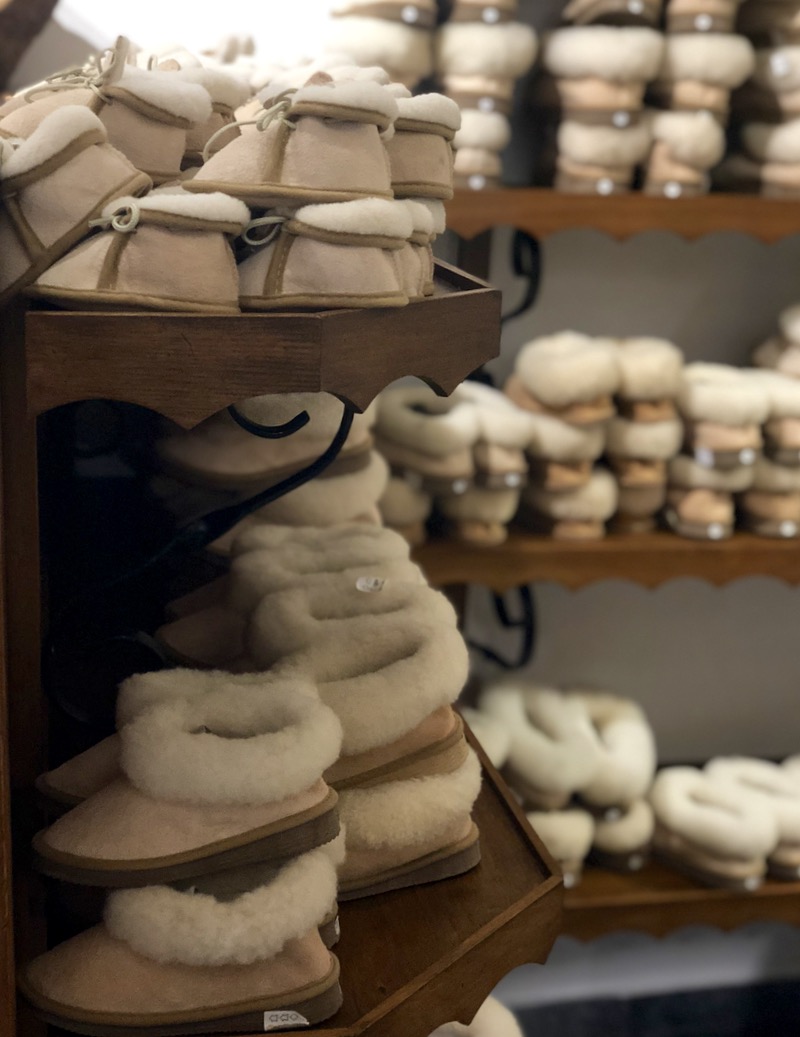 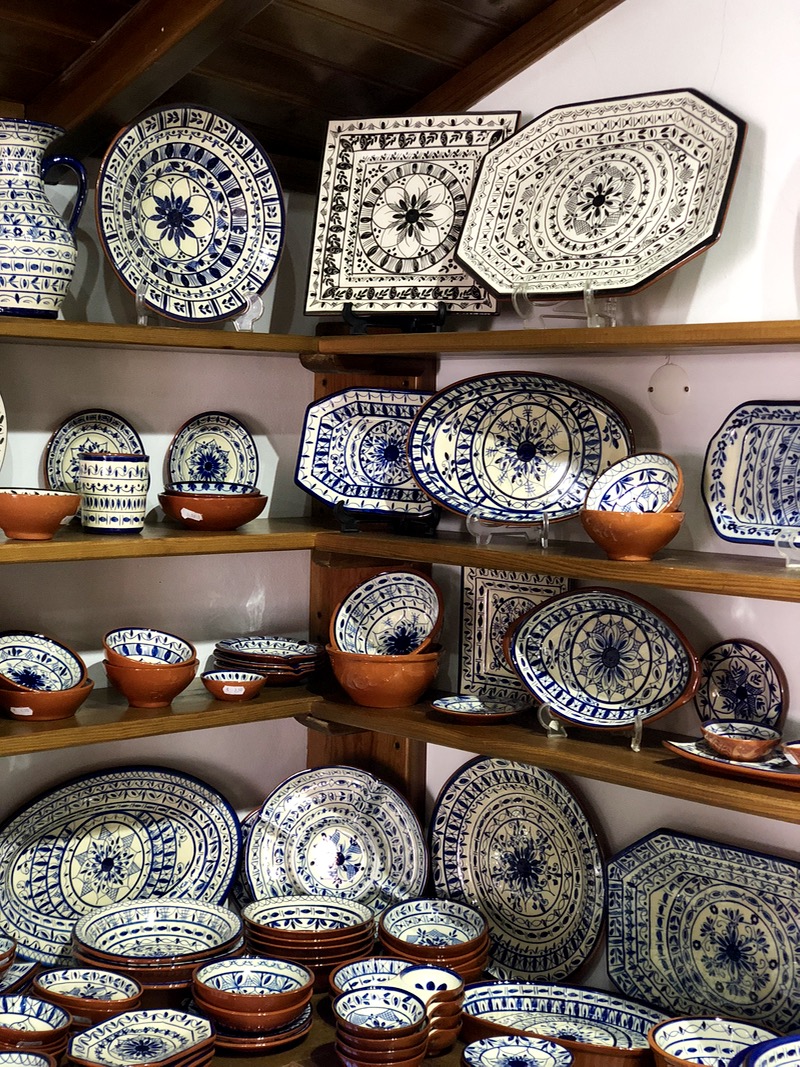 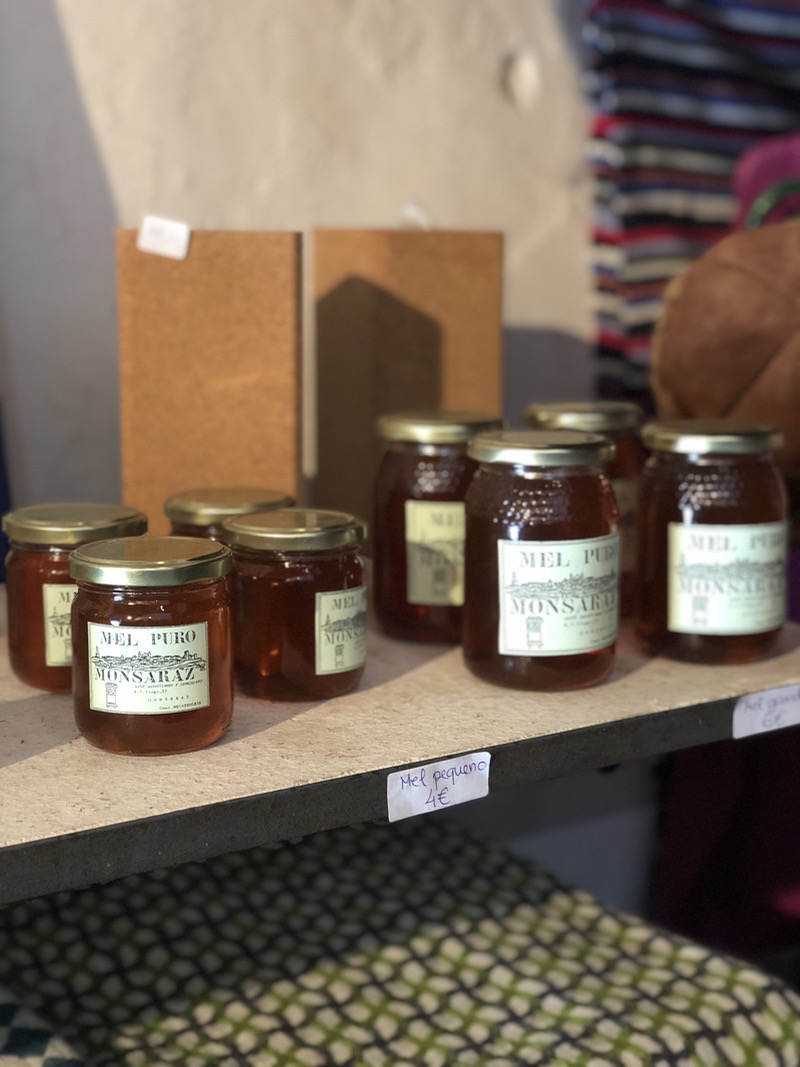 Alentejo region is poor but now thanks to the reservoir also known as the breadbasket of Portugal. Apples, asparagus, grapes, olives, and acorns (bellotas) thrive. Following these oak nuts are the celebrated black pigs of the same breed as on the Spanish-side of Extramadura, the king of pork made into an excellent “jamón iberico“. The land of cork now protects its slow growing trees, but you can still buy long-lasting wallets, coasters, even umbrellas made from this organic material. The shaved off bark trees characteristically dot the region as do sprawling vineyards. Alentejo is the largest wine producer in Portugal, known more for its port wines, but one should broaden his vinous horizons beyond the fortified vinho. Honey sweetens the typical egg cookies.
If you need to eat in Monsaraz, be open to rustic home cooking of the Portuguese ladies at Sabores de Monsaraz. Often, vintage oak barrel tops left over from winemaking front a cafe or eatery in the village making your orientation easier. For a finer local cuisine, head out of town to restaurant Sem-fim. Set in a former olive oil mill bought by a Dutch-born sculptor where his wife makes rugs for sale, the restaurant is of many locals favourite. Grilled meats like lombo de assado no forno (pork) and rego assado (lamb) are local specialties. 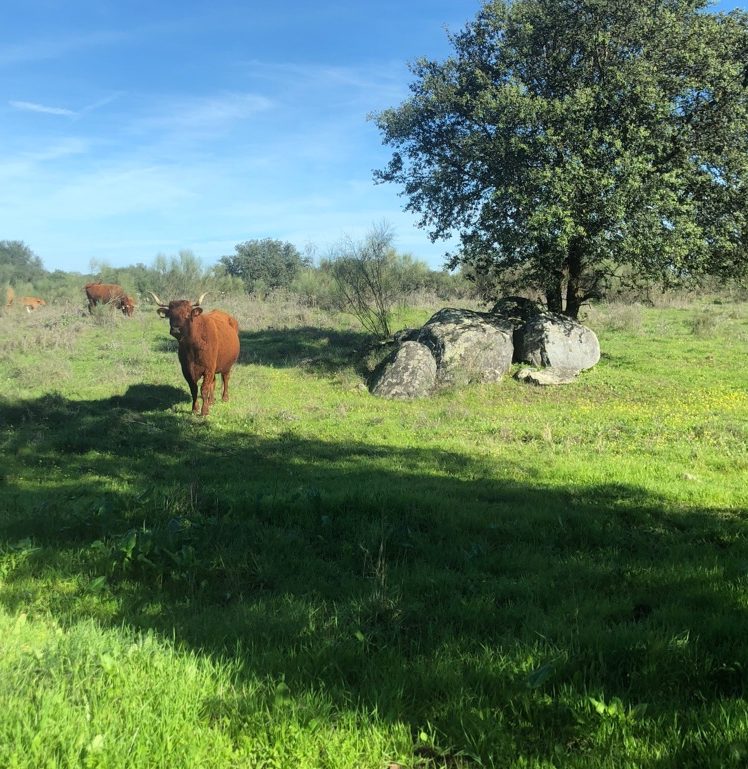 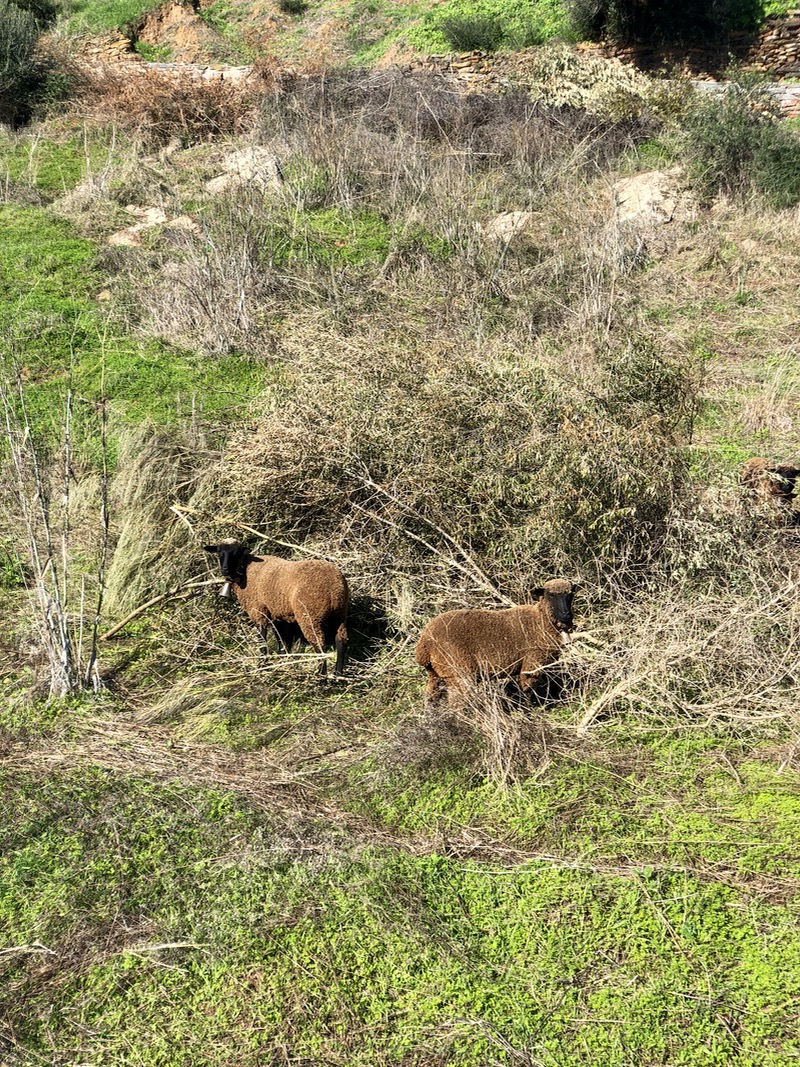 The sheep roam and hum in baritone on the lush pastures surrounding Monsaraz. I recorded the wooly creatures in a spawn of excitement as a dog herded them towards another herby and grassy patch of land. The sheep’s wool and skin is used to make cosy fluffy shoes sold in the village stores. Cows lead happy grazing lives here too. At São Loureço do Barrocal farm, recently converted into a superb luxury hotel, the fleet of hazelnut butter haired bulls and cows with babies zoom in any approaching living thing. They seem peaceful and keep roaming the pasture if you just continue on trotting on the ironed path.

Alentejo: the region of millennia-old monuments

A few minutes walking downhill from Monsaraz, over six thousand years old megaliths rise oomphs and ohs. Graceful feminine fecundity circles a phallic menhir. In the background the palm-framed silhouette of a former covent (a hotel for some time before the government shut it down) mysteriously shadows the millennia old formations. The region is full of these pagan stone statuettes associated often with the Celtic tribes. Unlike Stonehenge up north though, these mystic manmade sculptures do not yet attract buses of selfie hunters from around the globe. 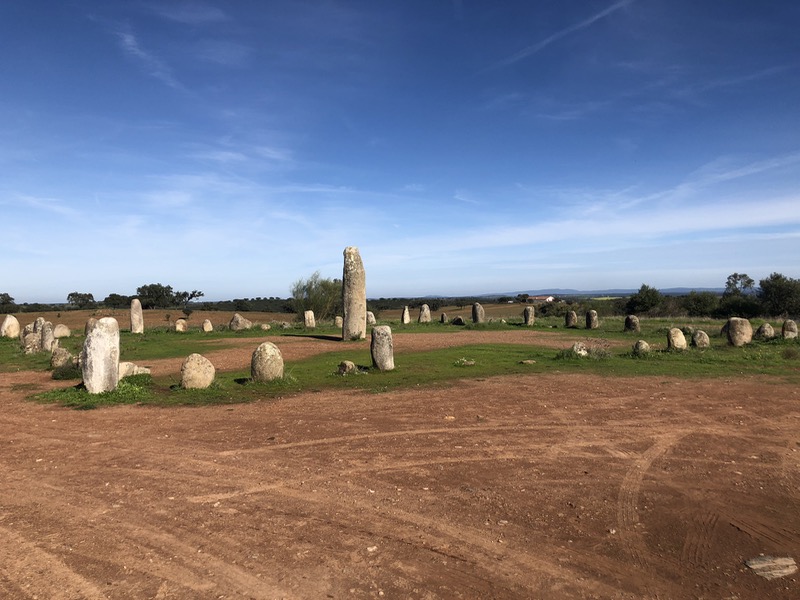 From the fortified Monsaraz, the cloudless nocturnal sky is perfectly suited for plain stargazing. Reportedly, the galactic canvas is so clear here that only the far-flung deserts can promise such an experience. An observatory nearby allows for a closer exploration of the Universe in two-hours lasting daily sessions starting at 18:30(except for Sunday and Monday).
The poor area has become so rich in experience, that there is no need to drive 45 minutes west to the much larger Evora. Although this is one of the most historic towns in Portugal with a castle, museums, bone chapel, and cobbled streets with Rua 5 Outubro offering a broad diversity of handicrafts, Monsaraz is eons more beautiful. Evora was just too shabby for our purist tastes. Stay in the countryside.
A bonus: when the brown sheep were herded to a fresh pasture on the verdant hills of Montsaraz, I stopped and immersed myself into their meditative singsong. Listen…