Le Tilleul is a contemporary Provençal bistro set behind the stone walls of one of the most visited charming villages within the reach of the Nice – Cannes shores of Côte d’Azur. Saint Paul de Vence captivated Chagall, Matisse, Picasso, and many other artists during the liberal 1960-70s. Today only droplets of the convivial local sprit remain in by the tourists besieged hilltop village, so keeping it local at least art and dining wise allows for a sneak peak into its bygone era to any open-minded visitor. 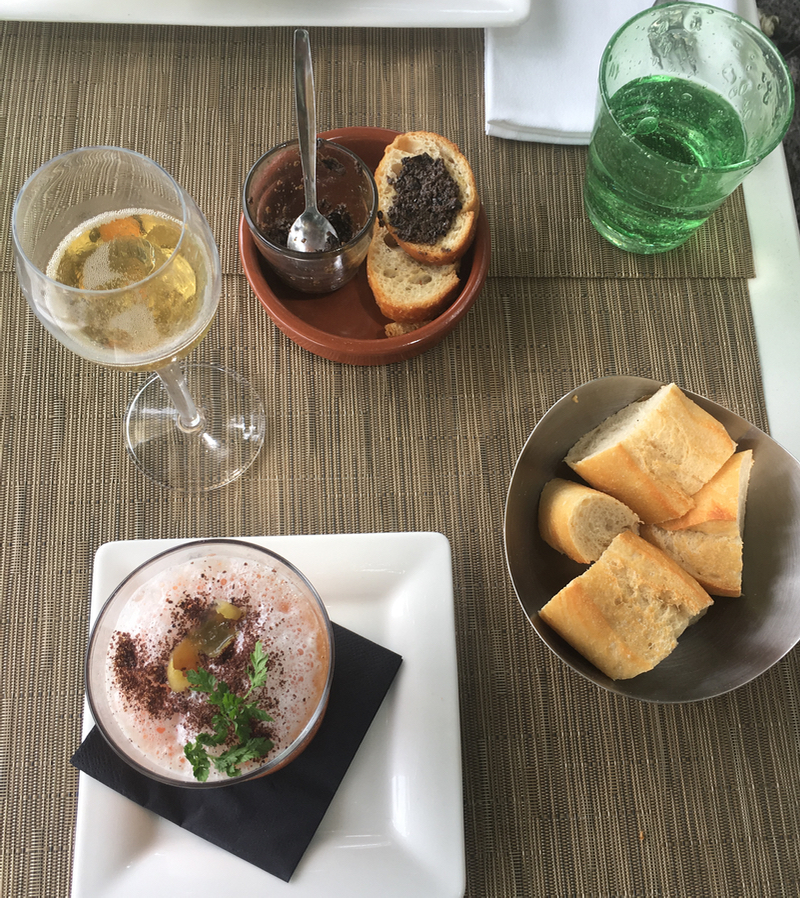 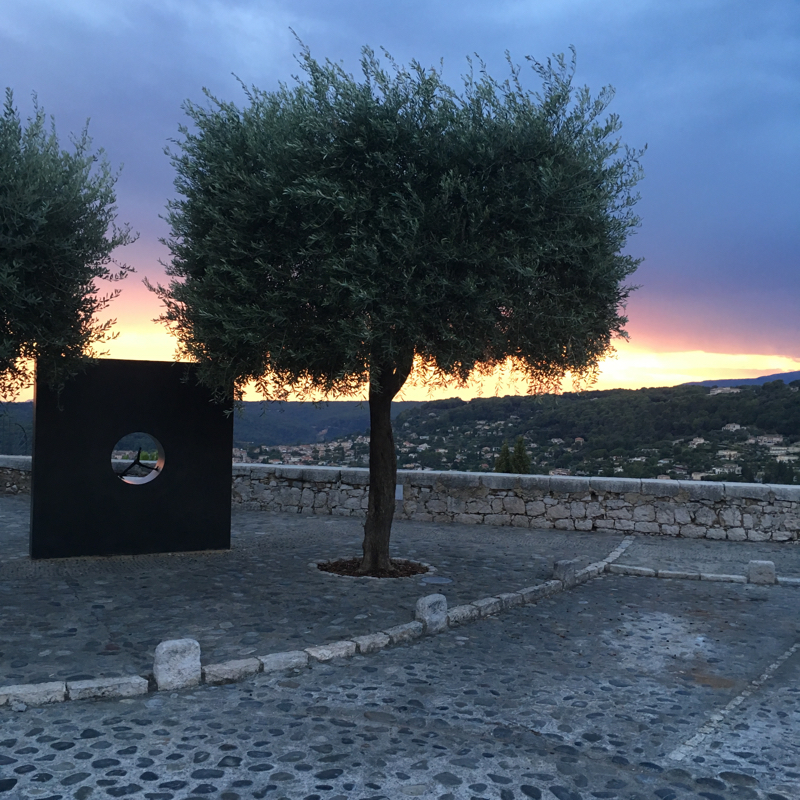 Now, the charm game is on the musician pulling the harmonica as he straddles the medieval walls around St Paul. Shielded from the Southern sun the straw hats wearing tourists devour the daytime, while the evenings swap the white and blue linen shirts mingling under the centenary linden tree (Le Tilleul) for more local crowds. Unless we stay at one of the hotels nearby, we mostly eat lunch at Le Tilleul before checking the art at the hit and miss galleries lining the western wing of the old village. 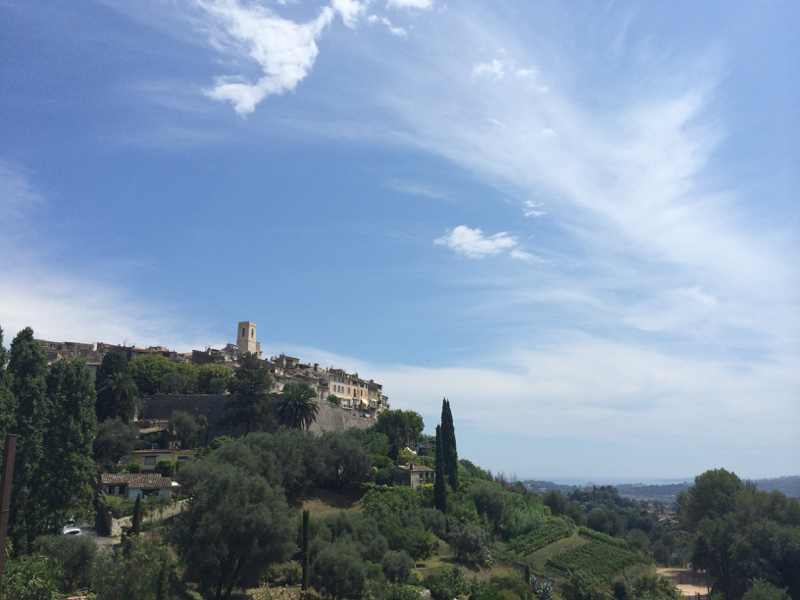 Colombe d’Or, the inn and restaurant that accommodated most of the accomplished artists and starlets like Alain Dellon, is more famous in Saint Paul de Vence, but it is more so because of the original paintings gracing its walls. Nevertheless, the food is more creative at Le Tilleul and the desserts, oh la la, save some space! 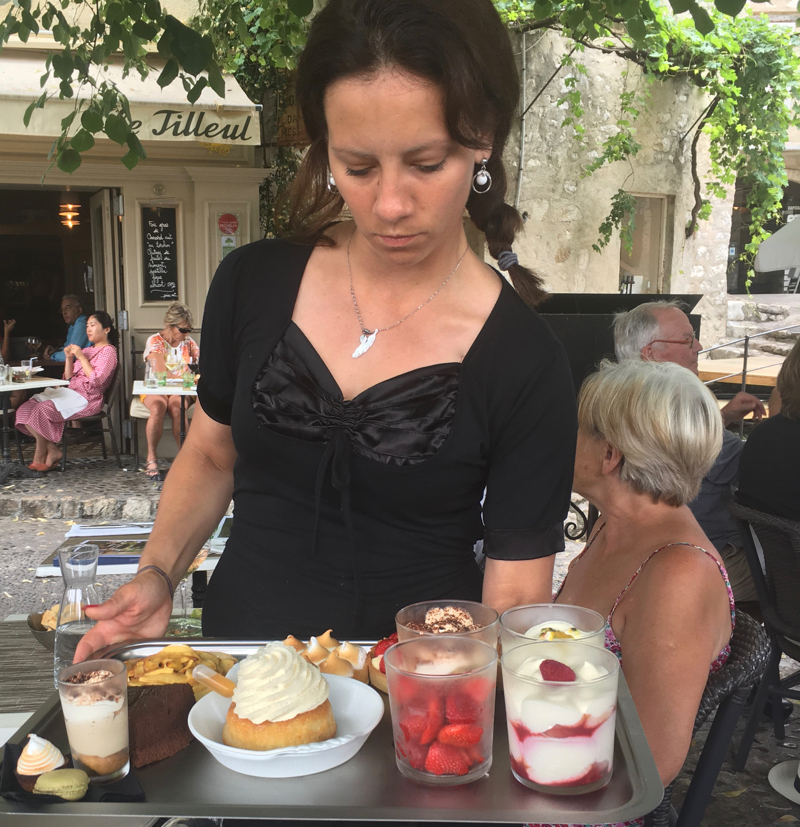 Le Tilleul: a dessert picnic under the linden tree

The pastry chef is a magician creating irresistible sweet beauties with fruits, pistachios and cream served in glass verrines like the Tiramisu and mascarpone layered raspberry or passion fruit, strawberries with house made whipped cream, but also the tartes faites maison like a fine crust apple tart, Savarin au rhum, tarte du citron, tarte Tropèzienne, crème brulée, …, chocolate cake or the cocoa oozing fondant – the incest with sugar can go on and on. If you get the Café or Tea Gourmand, three tiny versions of these desserts will be served with your brew. You can just come for the sweet afternoon treat, but we prefer the long by wine empowered lunch under the linden tree. You can also pop over for a sweet breakfast to indulge in the exquisite homemade pastry. 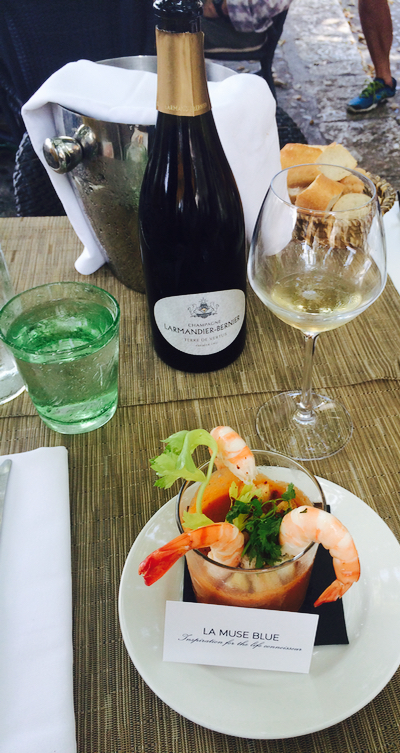 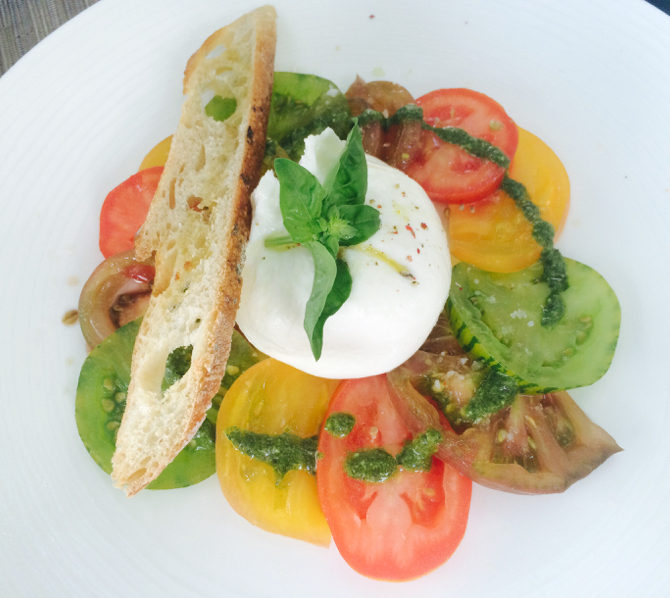 You can eat inside in the countryside bright set up, but for the most St Paul de Vence experience, eat out on the cobble stone patio under the Le Tilleul sprawling branches. Now the food. The Michelin guide summed it up precisely: “Fresh ingredients, capably prepared: simply a good meal”. Although simple, the cooks play mainly with the Niçoise, Piedmontese and Ligurian traditional plates, adding a contemporary, more light yet wholesome twist. My favourite plates over the years were cheesy, literally the buffalo mozzarella with the rainbow of tomates anciennes and pesto, goat’s cheese and ricotta sneak in to many seasonally changing creations at Le Tilleul. Plus with the wine, the fresh & ripened cheeses served with a salad are win-win(e).
Handwritten on the chalk board or a printed insert in the regular menu, the daily plates can be ordered separately or as a menu. The three courses including a dessert for €29 are the best value here. Dinner introduces some fancier plates laden with truffles. 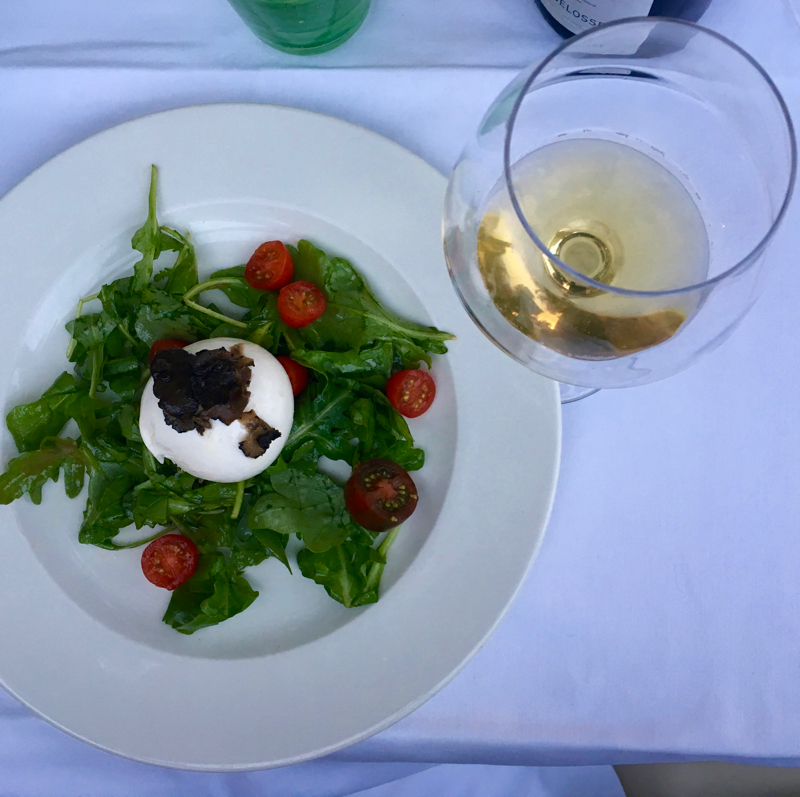 The seasonal menu keeps some plates unchanged. The staples include the Niçoise salad, the chicken and beef tartare have been on the menu for all the years that we frequented Le Tilleul. The Niçoise salad “in a different way semi-cooked tuna, sweet spices & poached egg” is always a good bet, while I only ordered the raw beef tartar at dinner. Prepared freshly cut with French fried potatoes and a salad, this is a red wine friend. The cured salmon starter also remains on the menu, but the plating takes on a chameleon coat. Once served like a carpaccio under salad greens, other time in a cake form with toast. If you are in doubt about the mains the traditional Farmers chicken supreme cooked with morels and mashed potatoes is a solid happy meal. The Scottish Angus beef, fillet of organic sea-bass, and other in the season caught fish get roasted potatoes to fill the starch gap. A very French sides – potatoes in all forms. After all there are over 170 types of them in the country, so forks in! 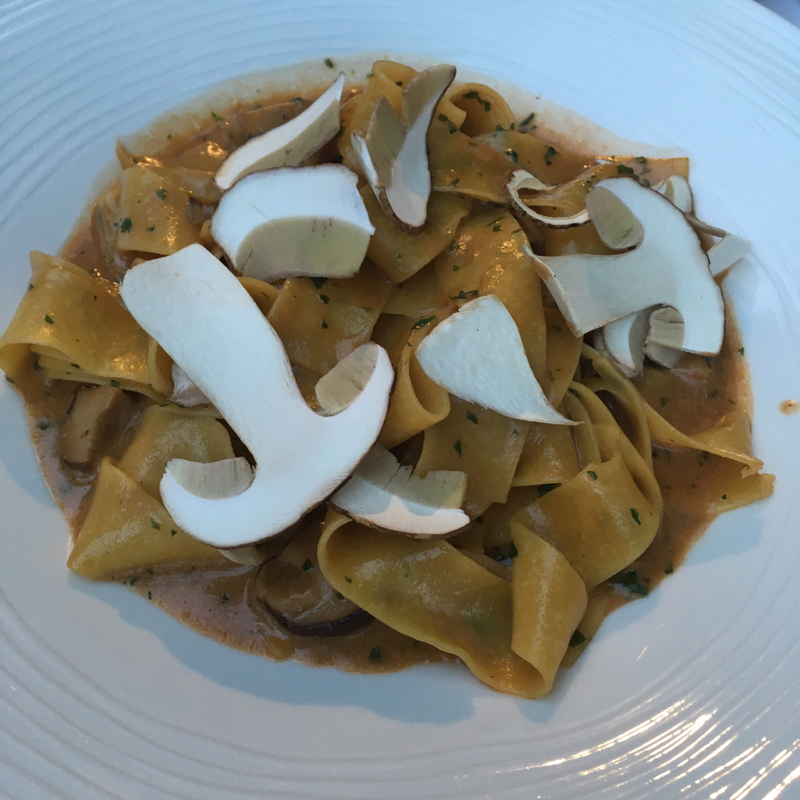 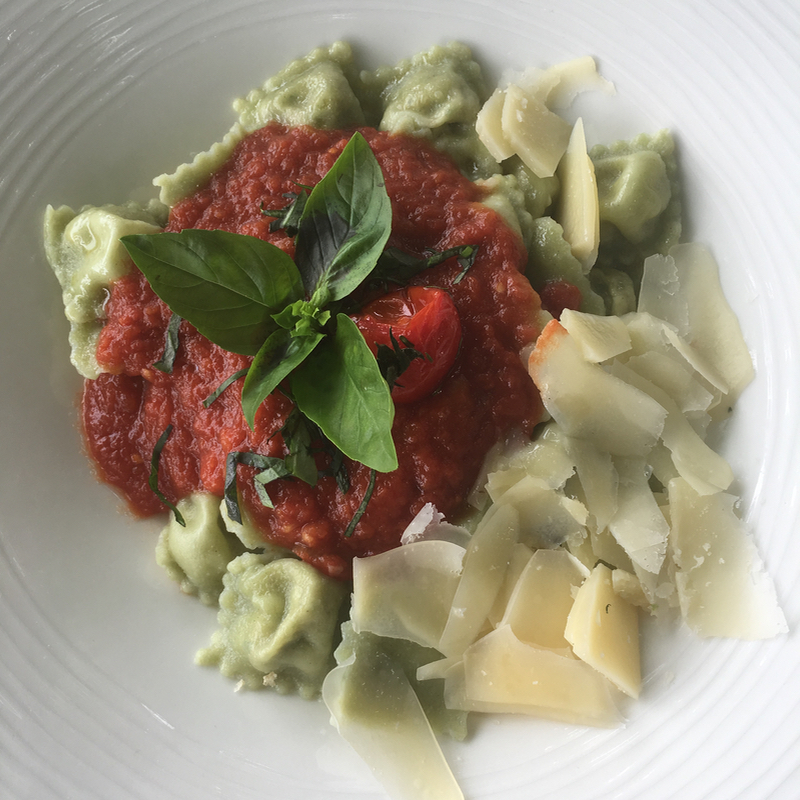 There is always a gazpacho that changes a bit each time, and so do the pasta. One day ricotta ravioli with dense basil tomato sauce are reshaped into linguini with porcini mushrooms or clams next to a vegetarian provençal vegetable lasagna. Recently the mellon season introduced sweet cantaloupe blended cold with spices and lemongrass…like a smoothie. Once three shrimps like drunken overhangs were about to dive into my superb tomato gazpacho. It becomes fun returning to Le Tileul! Well, the green gazpacho one day was a bit boring. Even the toast with lemon Ricotta cheese did not help since the creamy cheese was far from excellent. That blandness translated into the Fresh raviolis stuffed with ricotta, yet the tomato and basil sauce saved it, so much delightful umami. Everyone has a bad day. For lunch only a warm tart with cheese and eggs like a quiche is served with a side mixed greens. Courgettes played the seasonal flavour game in June, but any other vegetable can step in as the year goes. 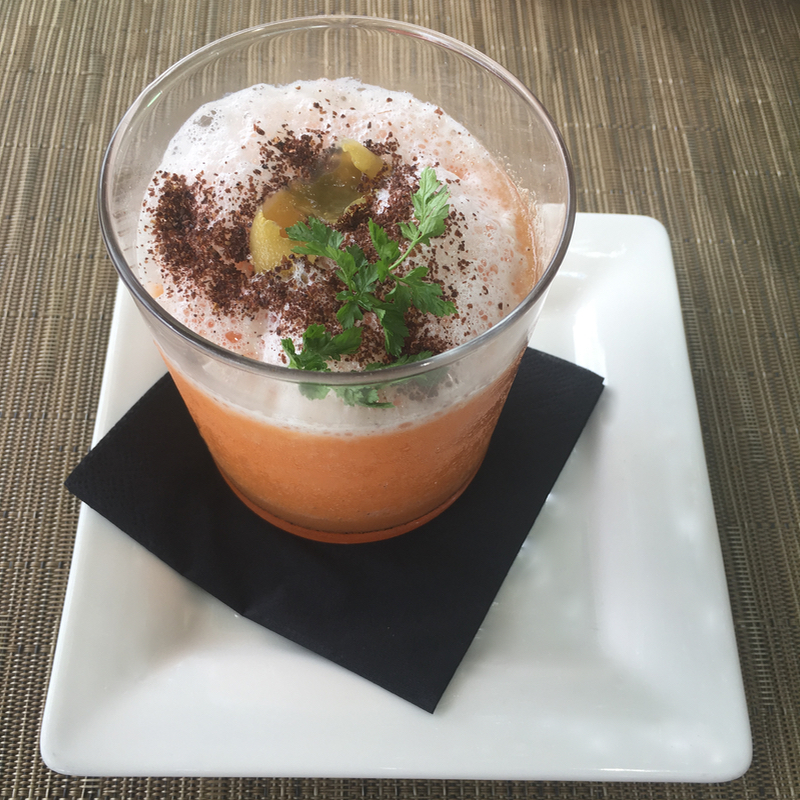 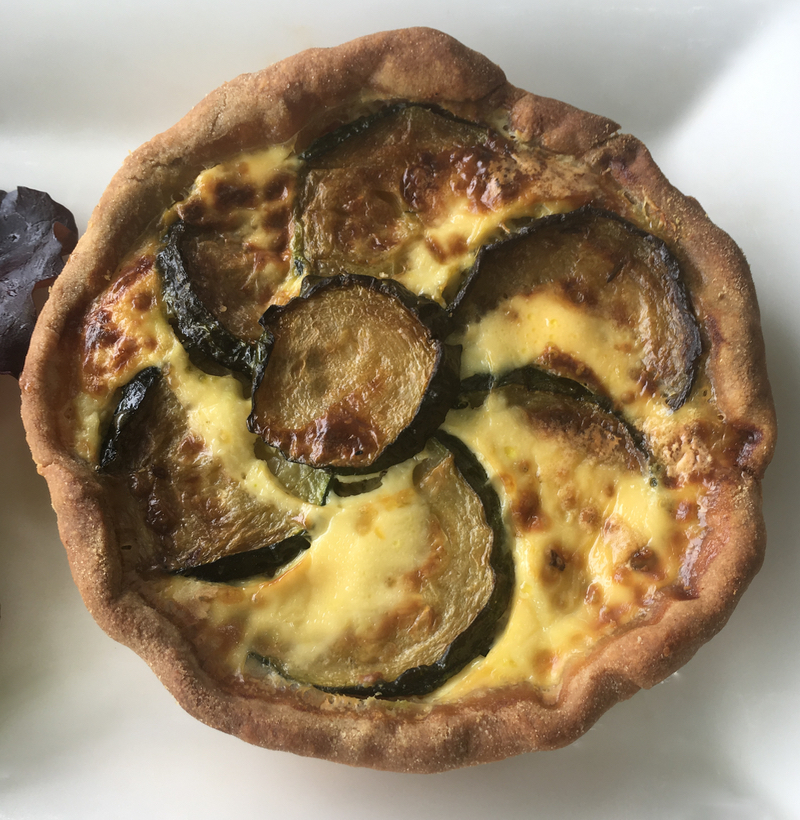 The wine deal where you do not expect it

The wine list is well priced for such a tourist hotspot. Some gems pop out on the menu such as the perfectly crafted boutique champagne by Jacques Sellose. The deep honeysuckle and well sharpened toast of the Initiale brut sells for €146 per bottle. This wine does not appear on just any wine list and when it does, usually it will cost you at least a double. The grower champagne by Larmandier-Bernier Longitude for €65 was also a spot on for a family lunch with my sister sommelier and her wine expert fiancèe. If you are in the mood for a deep, slightly oaky Rolle-based white get the local Clos Saint Vincent. While any lighter meal will bear the ultra mineral Pouilly Fumé by the legendary house Domaine D. Dagueneau « Silex » now made by his son. 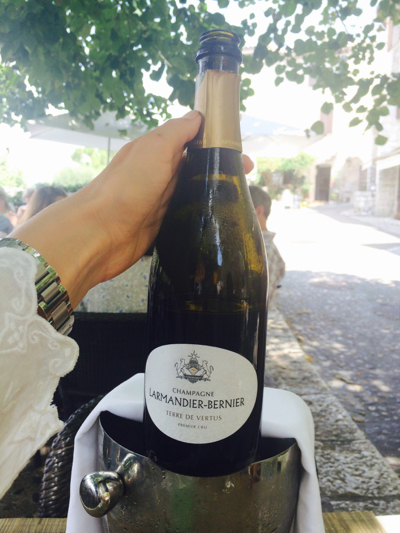 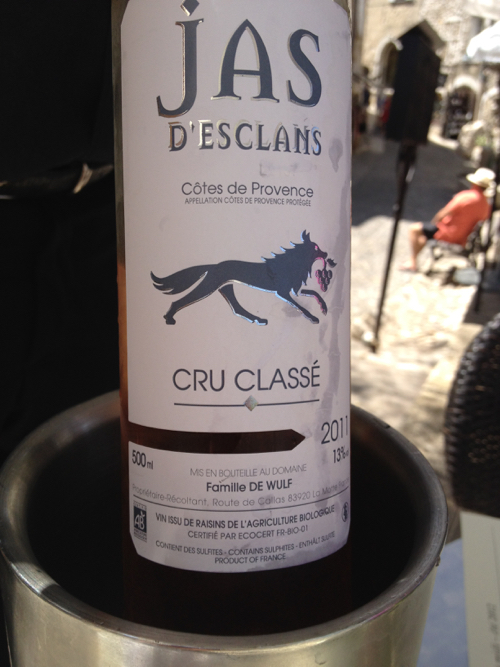 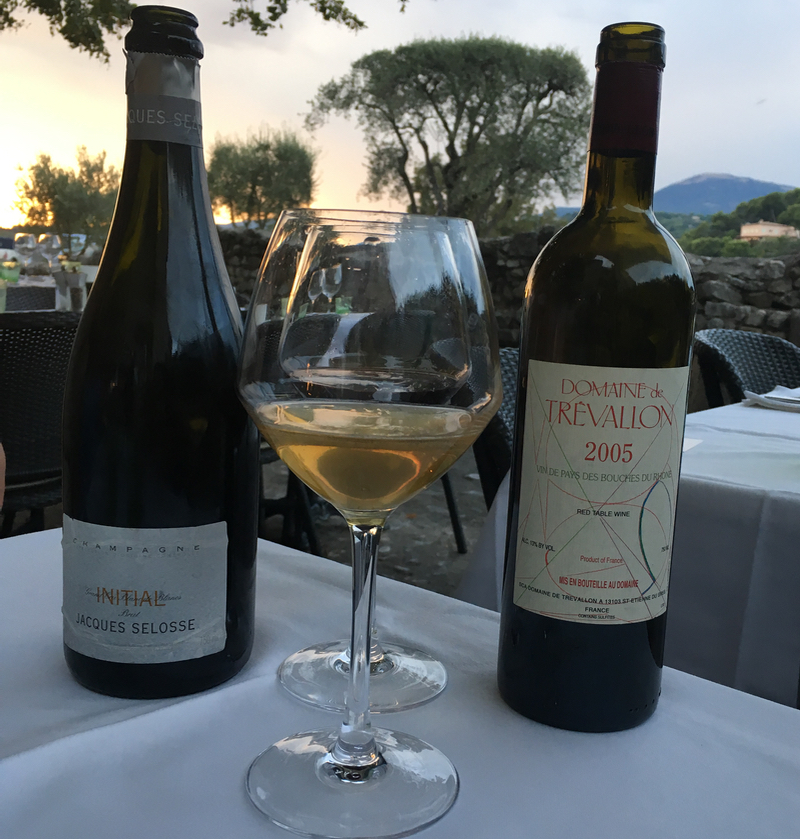 As the sun penetrates the lush branches of the linden mass, one gets rosé cravings. Domaine St. André de Figuière Première and the organic Jas d’Esclans will fit the demand, and there are other half, regular or magnum bottles changing regularly. From the reds the Domaine Trévallon IGP Alpilles in older vintages so its loud tannins won’t bark at your palate is highly advisable.
Organic fair-trade iced green tea or rooibos by Chari Tea or LemonAID passionfruit or lime lemonade make journeys safer for drivers. If you do not have time to linger around, this is South so slow down, ok but if you are pressed to go La Petite Vigne offers plenty of artisanal gourmand produce and a sandwich or wrap at Les gourmandises du Tilleul next door is better than Mr Donald’s food imported from America or anything from Quick, the Belgian fast-food chain popular in the Country of the Gals. When in France, get local and feel the difference. The water at Le Tilleul is served in the bubble blown colourful double glasses from nearby Biot, making it tastier than anything in paper or plastic cup sipped through a straw.
2 Place des Tilleuls, 06570 Saint Paul de Vence
+33 4 93 32 80 36
Daily 8am-10pm