San Miguel d’Allende, the artsy, calm, colonial town nested in the El Baijo lowlands about a three-hour drive from Mexico City, can be best defined by its warm colors. The brush of nature was generous on its romantic canvas, while human hands painted the walls of its tiny historic centre with pastel and bold colors as well as depictions of the daily strugles of millennial life. Emotions gush from its mature heart affecting the locals and visitors alike. 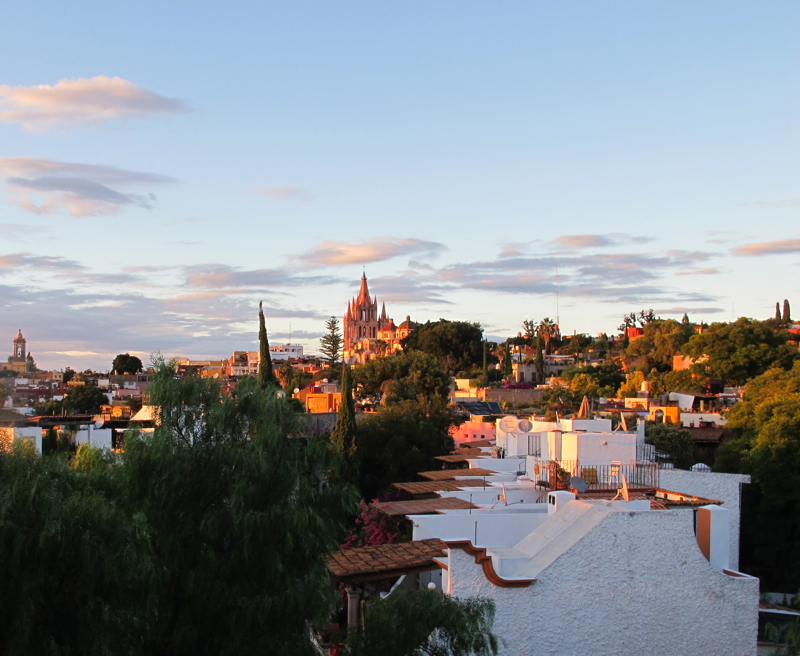 The romantic movie set of sun setting beyond the horizon continually reveals coral, light peach, butterscotch, ochre and pink rose shades, visually warming even the white washed facades. Such tranquile beauty captivates deeply spiritual souls as well as travellers seeking the charms of this UNESCO World Heritage Site.
If you come from Europe, the town may feel somehow familiar. The spiking Parish church of San Miguel Arcangel surrounded by cupolae of the adjoining Catholic buildings and cafes under the main square’s arcades recalls a scene from a Southern Spanish town. The historic centre with its clumsy cobbled narrow roads were indeed adapted from the Old Continent by the colonizing Spaniards. Mind your step as here only sturdy sneakers will save you from sprinking your ankle. Imagine if the Prague’s Charles Bridge was not repaved from the 14th century, welcome to the rustic walks around San Miguel! 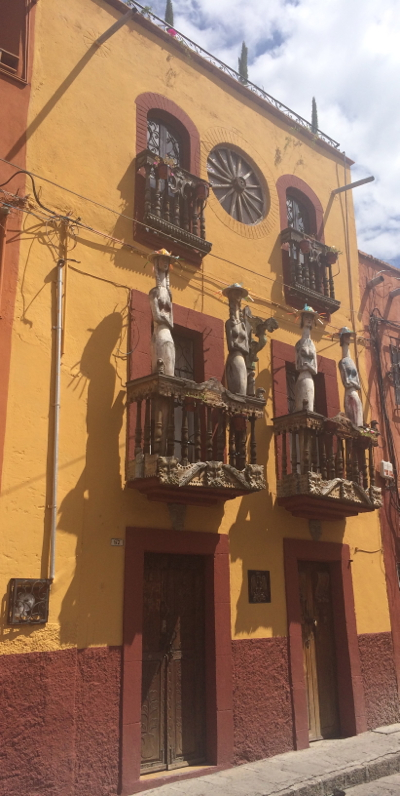 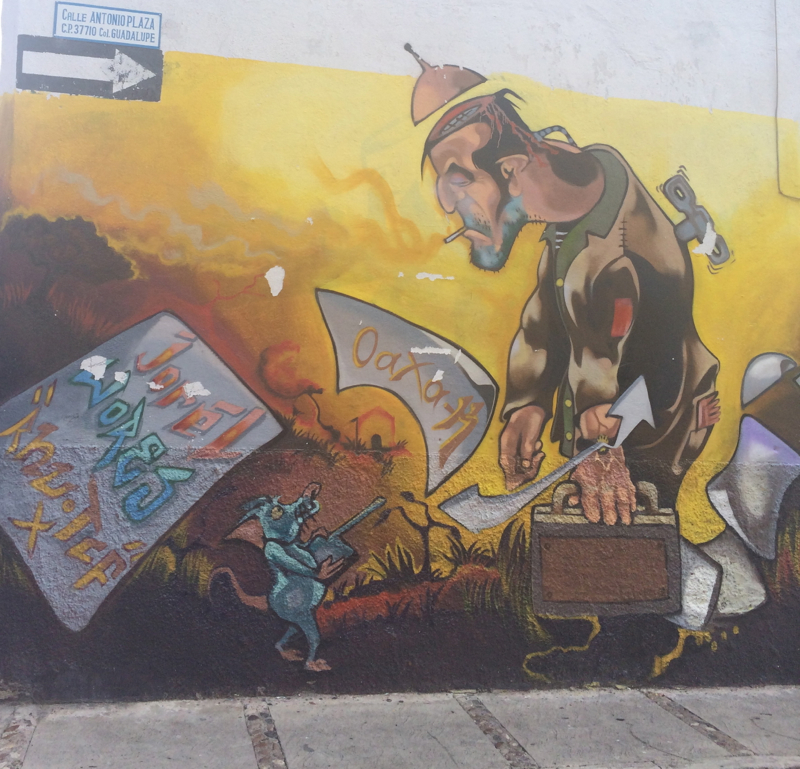 The colonial architecture is the lungs of its walls, breathing with sights of remorse asserting its bloody legacy. One of the most important battles for the Mexican Indepence from Spain married into its last name. Ignacio Allende, a native of the town, was one of the leading figures of the insurgence that fired up in the surounding state of Guanajuato.
What you find here today though is that most of the art is locally conceived and authentic. As street art has become respected by the authorities, its blooming beauty can be now appreciated across Latin America more than anywhere else. The Mexican muralists are globally recognized as the maestros of connecting their work to the public emotions. Often politically elloquent, their depictions of violent reality as well as fantasy, are powerful. 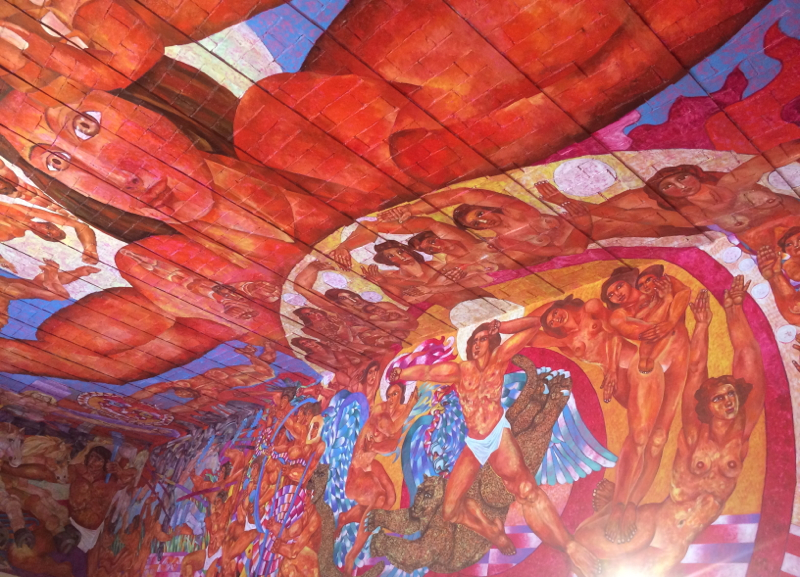 You will get lost as if diving into a deep ocean cave when looking at the mural by David Leonardo Chavez [pictured above] at the local Public Library. Mystic love and warmth in his colorful paintings depict complexity of life. If you seek beauty in art, not artists’ depresive outpourings, then you will find plenty of joy in San Miguel d’Allende.
This small artistic quake, has spurred a tsunami of contemporary public art found across the country. From the late Diego Rivera, Orozco to the politically charged appeal of the murals by Siqueiros, today art is better nourished in Mexico than anywhere else South of the US border.
Many galleries here support local talent. The B’Nai Or Art Gallery inside the Instituto Allende, a working art school, organizes regular exhibitions. The owner himself is a musician and his electric guitar inspires the creative expression of David Leonardo, the resident artist I mentioned earlier. Great music sends vibrating shivers all over your body and can well out creative work in sensitive individuals.
Another building nurturing artistic creativity, where many world renown artists taught (Siqueiros) or studied (Pablo O’Higgins), is the former College of Fine Arts. Now the Ignacio Ramirez Cultural Center “El Negromante“, is a must visit attraction, where many magnificent murals adorn its interior. 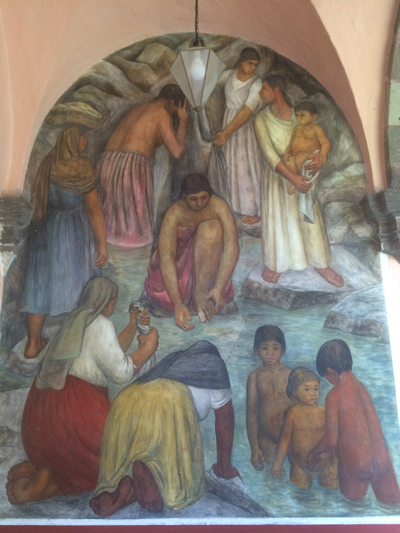 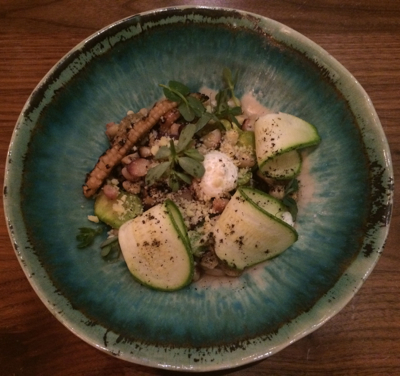 Contemporary street art found its way from the public walls to the local restaurants plates. The chef Matteo Salas at Áperi, located inside the boutique Hotel Dos Casas prepares a gastronomic feast every night for his tasting menu. The new hotel is a more personalised option for lodging in town, yet by far the best in the region is the Rosewood Hotel. This sprawling property offers the best panoramic views from its rooftop bar Luna as well as from some of its rooms. Unfortunatelly, the tapas served there is nothing special, so for a better meal head downstairs into the hotel’s 1826 restaurant, that over the years proved itself as one of the finest dinings in town.
For a more sustainable and healthy meal the community run organic cafe and market Via Organica might be more appealing. During a very slow food breakfast or lunch savor the chemicals-free local ingredients and become the part of the local mostly expat supported eco-friendly lifestyle. 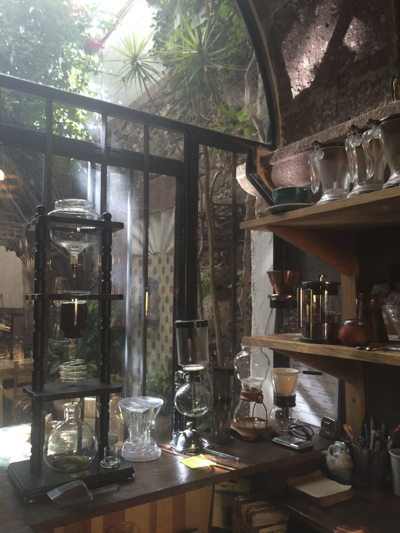 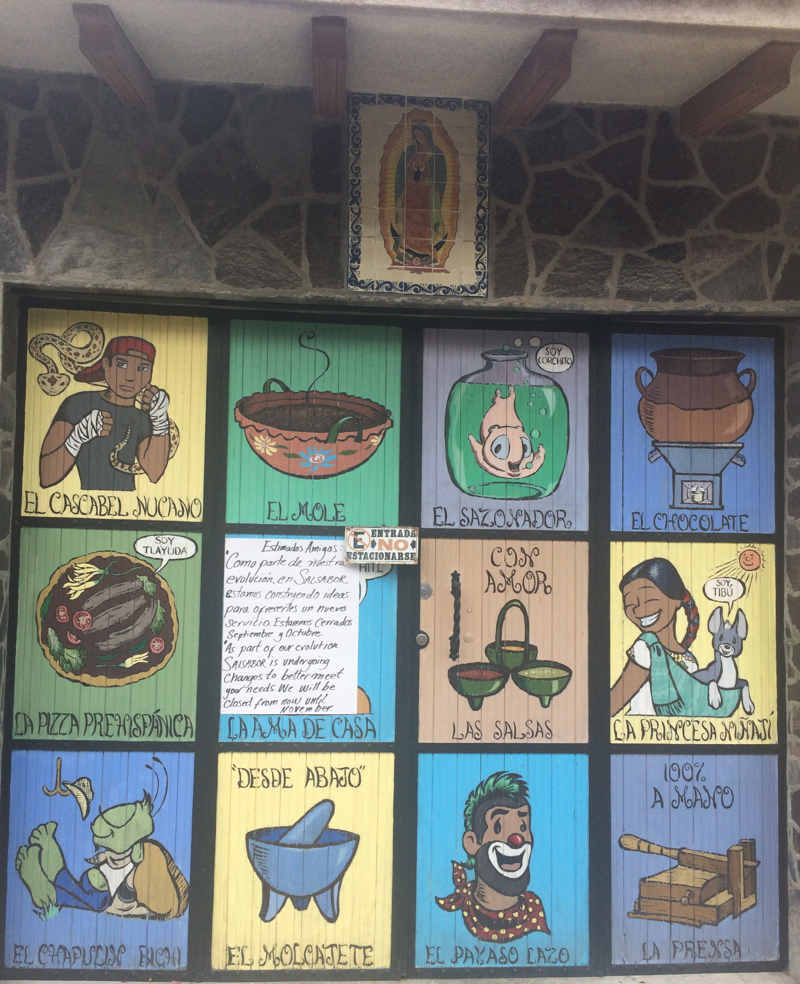 With so much inspiration around, let your inner muse pour out of the mind’s bottle by engagin in a painting, sculpture or any other art class. Many artsits here share their experience of art with anyone interested. Find them either at their workshops or get recommendation from your hotel concierge. I painted in the garden of the Rosewood hotel and enjoyed it so much that I did not want to leave my agave unfinished, but as time flies seing other people’s art was more important than my amateurish indulgence.
Most of the artists workshops are crammed into La Aurora, a former textile factory in the North of town. Although much of the merchandise there is rather commercial, you can still find serious galleries and even artists working on a new canvas inside.
To refuel, hang out or to find a talkative companion, sit down and dive into the slow cloud of the local coffee shops and cafes. Considering its compact size, San Miguel has highly addictive coffee culture, dotted around its hilly cobbled streets. I find the rustic ambiance of Lavanda Cafe attractive as one of the most precise coffee experiences in town. 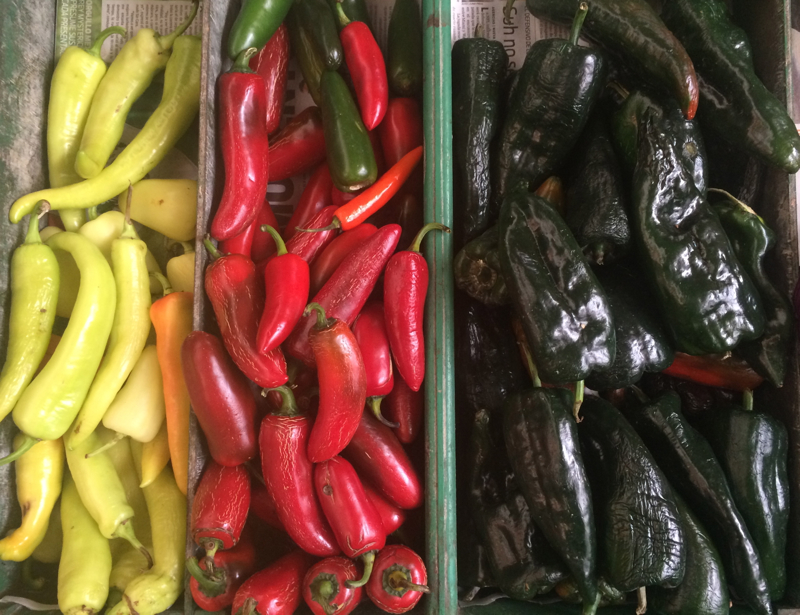 Vist of the local covered food market or the weekend organic fair outdoors is also a colorful affair. There you will find typical Mexican produce, such as the hot, mild and distinctively colored peppers, from bright yellow, spring green, sexy red to a moody black. The most common sightings on the autumn market are nopales (cacti fruit), tamarind, corns and the green chayote gourd. 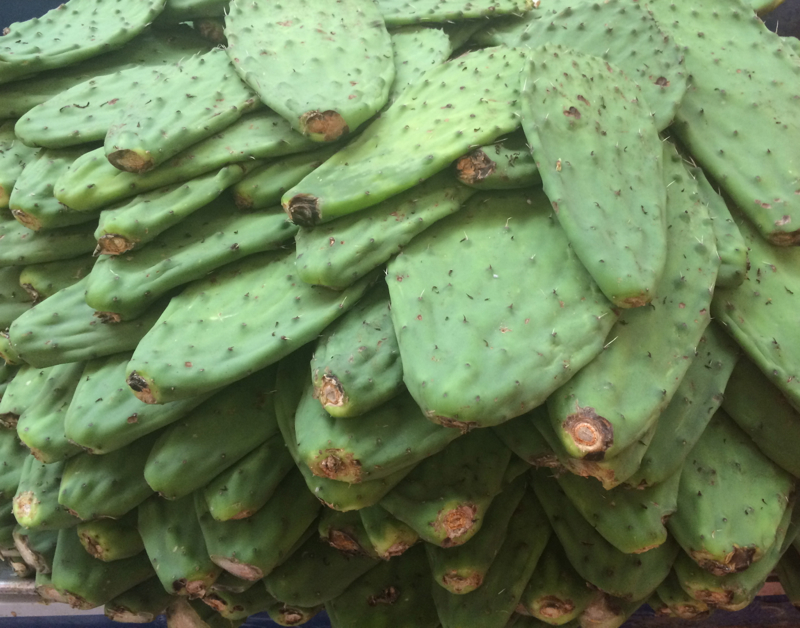 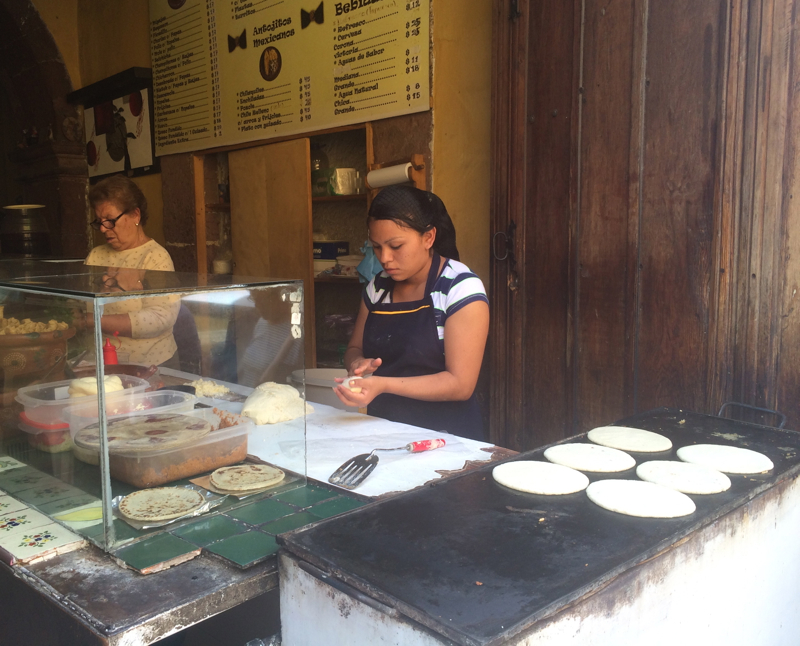 For a snack, in Mexico called antojito, bite into boiled corn or have some freshly made tortilla with endless toppings. Chapulines, the protein rich and almost fat free grasshopers, larvas and other insects make any casual taco a gourmet experience. If chewing the bugs raw or plain grilled is too adventurous, mix these weirdly looking animals with plenty of creamy guacamole and enjoy this sustainable food of the future! 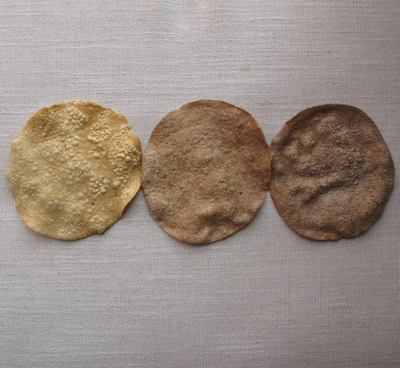 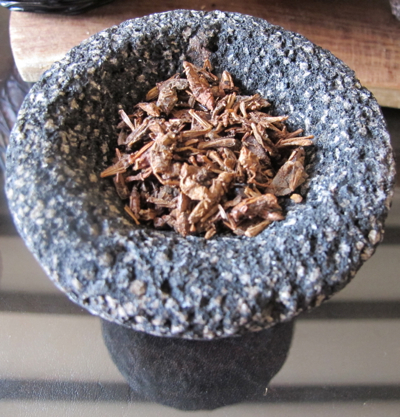 Local style gelato is also much loved, especially during the hottest months (May and June) when daytime temperatures can reach over 35degrees. Luckily for the area the dry mountain air and cool winds turn at least the summer evenings into a delightful soirees outdoors. From December to February, when many Mexicans arrive for the holidays, it can get cold in the night, but mornings are again pleasantly warm. During the rainy season from June to September is the least desirable period for visit. 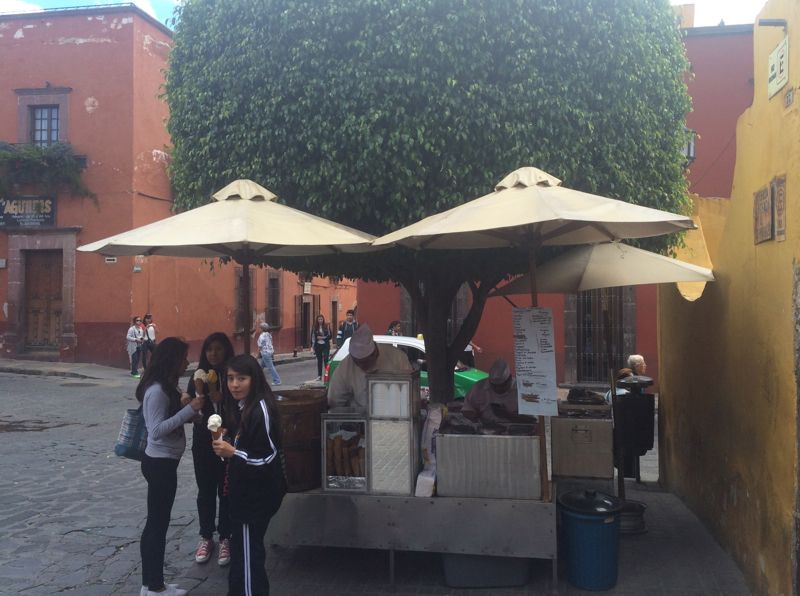 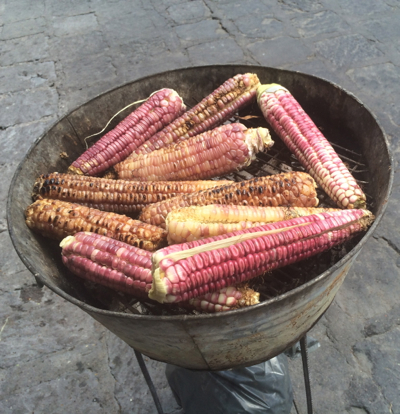 San Miguel d’Allende might incide patriotic pride of the Mexicans, yet today many of its residents are foreigners seeking the safe heaven in the crime rigged country. Historically, the American expats arrived after the World Wars to create freely in its amicable ambiance, most of them are older now, and their children took the bohemian reigns of artists life.
The region is quite immune to violence and the all too common robberies in the Districto Federal (the capital city) and by drugs infested North. Still, better be alert in particular in the dark alleys once the sun ceases to light up the exteriors.
Many Mexican celebrities and politicians found a refuge in this charming town, and it is likely that you will fall for it as most of the visitors did in the past. Let your creativity flow, if at least for the time spent in San Miguel d’Allende.