Winemaking in Al-Lubnaniya (Lebanon) was heavily marked by 20 years of civil war (1975-1990). During this period the wine industry was virtually nonexistent. This dark age of the Lebanese wine production was deadly for most wineries, except for one. Serge Hochar managed to make and export wines of remarkable quality so he was able to continue the family business without interruption. For his bravura the oenologist and the owner of Château Musar was named the first ever ‘Decanter Man of the Year‘ in 1984. His awareness of the extraordinary achievement seems to drive him still today to produce one of the best wines on the world. Château Musar has a strong affinity to Europe, particularly the UK, where the majority of their wines are exported. About a quarter of the total production today stays in Lebanon. 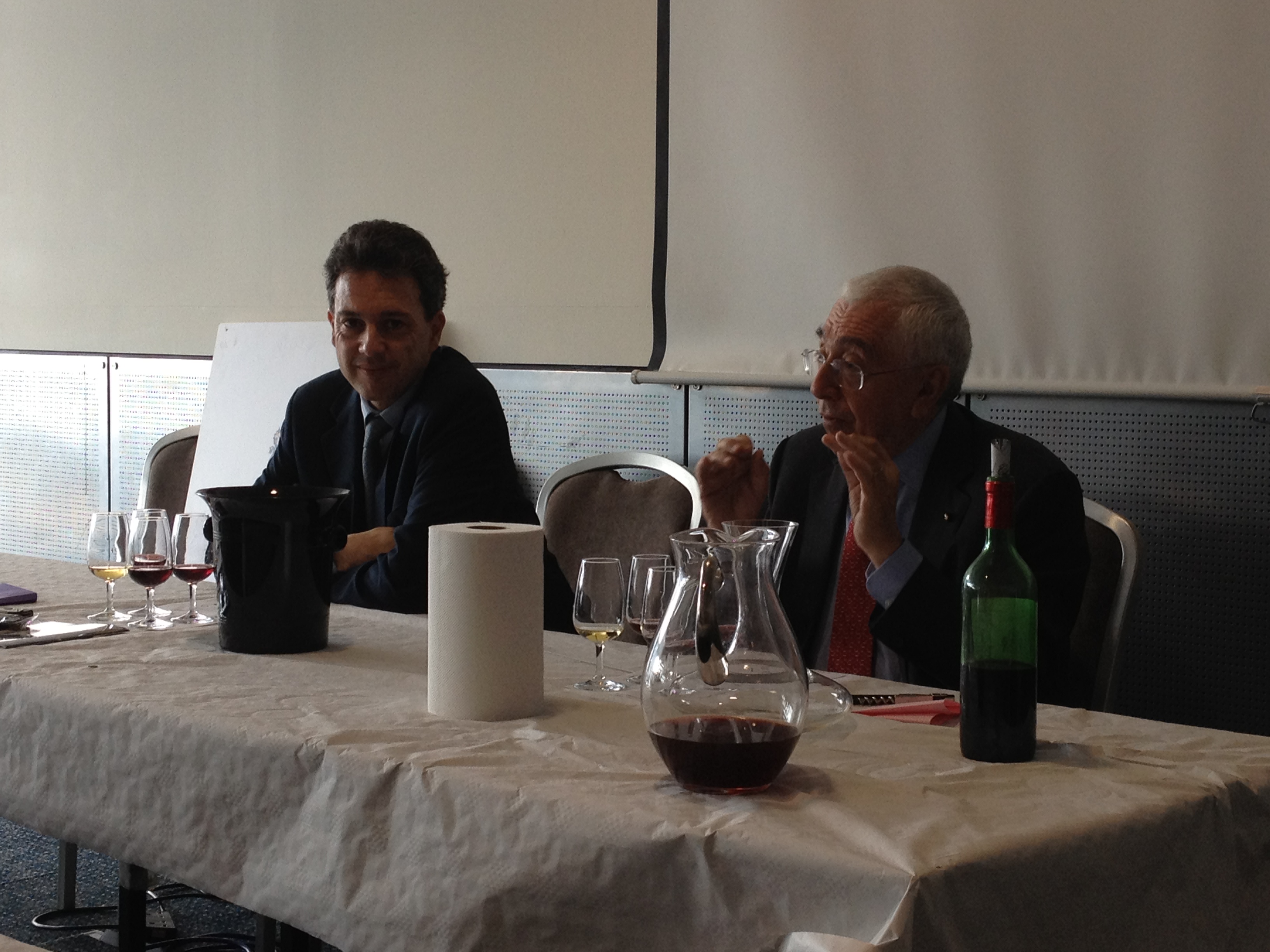 The climate in Lebanon is quite stable – rain in winter, but not in the summer so the grapes are protected from this adversary of winemakers elsewhere (humidity is the nest for mildew and other diseases). During a tasting next to his son, Serge Hochar pointed at the importance of mountains in Lebanon. Their role is in moderating the temperatures and assuring the high day/night temperature differences. Most Lebanese vines are grown in the Bekaa Valley, east from the capital Beirut.
Inspired by the family’s French roots, Serge and Gaston Hochar produce red wines from francophile grape varietals – Cabernet Sauvignon, Cinsault, Carignan and Grenache; and from indigenous Lebanese grapes – Obaideh and Merwah in white wines. These indigenous varietals resemble Semillion and Chardonnay and are reported to be their predecessors.

The approach to winemaking of Serge Hochar is to be as close to nature as can be (organic viticulture and winemaking using natural yeast fermentation, adding minimum sulphur, no additives and chemicals) and like in Rioja releasing wines only when they are ready to drink (top range at least after seven years). Keeping the bottles in the winery is expensive and it elevated Château Musar as the biggest winery cellar of still wines in the world. Serge Hochar had not added any sulphur into his wine at all until the 1964 vintage, but he discovered that a minimum sulphur (less than 10mg) was needed to protect the wines for longer.
The winery has three main ranges of wines:*

The wines and vintages tasted at the London Wine fair:

Château Musar White:
2005 – dried grapes, flowers, nuts and quince on the nose. Honey and quince, exotic fruits – banana and passion fruit, citrusy acidity and intense aromas make this wine a joy to drink even in its relative youth when compared to the other Château Musar wines.
1991 – wow! This was something my palate savoured only on rare occasions in my wine-drinking life. I am not an “over-oaky” fan, yet in this case the 18-21 months in new oak made wonders. A serious competition to top Graves in this extremely deep wine that balances acidity with multiple layers of fruits. Dried apricot, cantaloupe, nuts, herbs and an icing of marzipan. It is not sugary though, but highly enjoyable on cool nights.
1986 – almost the opposite to the 1991, but not in enjoyability. Until 1986 the whites were made without oak. In this vintage only one grape was used – the Obaideh. It is a delicate and fresh wine with creamy nose and apricots with exotic fruit on the palate. Nice acidity.
Hochar Pere et Fils:
2007 – intense nose of dried black currants and berries, spices, bread and cherries. On the palate it is very expressive with leafy character, dark berries and nicely incorporated tannins due to careful French oak maturation for nine months. A great balance and strength like top Bordeaux.
Château Musar Red:
2005 – juicy dark fruits with mouth-squeezing tannins calling for more ageing. The nose is smoky, spicy with touch of dark chocolate and tobacco.
1999 – known as ‘an exceptional year’ in the Bekaa Valley. tThis wine came out very balanced and fresh even after almost 14 years. Leather, cigar box, fresh currants and dark cherry on the nose followed by high acidity adding freshness.
1980 – cool winter and twice as usual rainfall in the winter together with mild summer leading to slow ripening and low sugar levels is today still showing a bit racy with sharpness and high acidity. Ripe fruit, leather and spice make it a complex wine, yet the alcohol feels on the palate. Its tannins are still astringent so hopefully this wine will show better in a couple of years.
1974 – my favourite red wine from the tasting. This vintage has been waiting in the cellar for longer than most other  Château Musar reds as it was not considered ready. Serge Hochar did not think it was good enough at first, but once when on one visitor’s request the bottle was opened, its excellency saw the taste buds of many excited palates. Super-complex on the nose with flowers, wet leafs, mint, raisins, prunes and tea leaves, one is eager to sip it immediately. The palate is tender with elegant fruit, smoked beef, dark chocolate leading to a delicate touch of apricots as the wine swirls on your tongue. This is a wine to be drunk on a special occasion with even more special people who can appreciate it.