A flight through 1998 Bordeaux with a Master of Wine Jasper Morris at Berry Bros.& Rudd in London revealed the strengths of this vintage in the Right Bank of the most watched wine region on the world today.
The fact that 1998 was a great year for the Right Bank but not as successful in the Médoc and other districts left from the Gironde estuary highlights the necessity in sharpening our focus on a specific area each year. Jasper Morris, MW said: “The Left and Right banks in the Bordeaux region should be considered separately.” The weather conditions can vary quite significantly in each area leading to a different quality of wine depending on the vineyard’s location. The two recent vintages of 1998 and 1996 are the best examples of this happening in one region.
As I mentioned already the 1998 was perfect for Saint-Emilion and Pomerol on the Right Bank, but not outstanding on the other side of Gironde. The opposite happened in 1996 when Médoc produced remarkable wines, whereas across the river they were in general a more average vintage.
On these two examples I have learned that it can be a huge mistake to over-generalise especially in such a big region as Bordeaux in South West France.
Still, we all have preferences in terms of châteaux style. During the dinner at Berrys there was a heated discussion between the guests when our host Jasper Morris, MW raised the question – “So, which one do you prefer?” 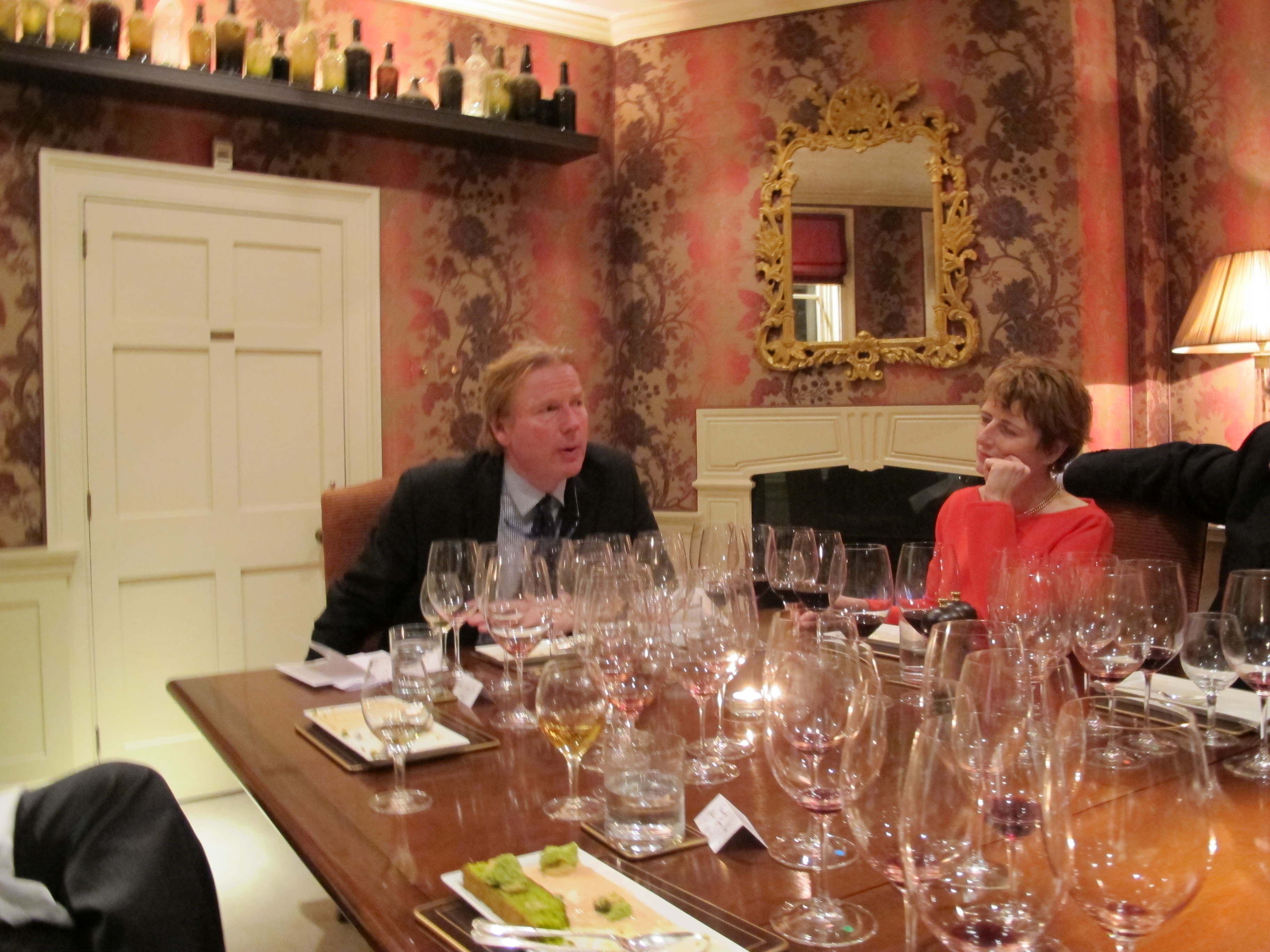 We tasted seven red Clarets and one outstanding sweet wine with a desert. The sweet queen was from Sauternes and not from the Right bank. We were treated like a royal family as we savoured a glass of golden-hued Château d’Yquem from a fantastic vintage, the 2001.
First came two St Emilions in ‘B’ classification:
Château Beau-Séjour Bécot, 1er Grand Cru Classé ‘B’
Château Angélus, 1er Grand Cru Cru Classé ‘B’
We were puzzled over the technicality of the French appellation system. Not only it differs tremendously from region to region but, often, it confuses the consumers by using the same name such as the Grand Cru, in this case meaning something different in the Bordeaux St. Emilion and in Burgundy. You always have to consider the other wines in the appellation and the ways they are being identified in terms of their classification.
The Château Beau-Séjour Bécot was a fresher wine bursting with youthful fruits whereas the Angélus was more deep, intense, warm and settled. Approximately half of the present diners preferred the former for its refreshing properties. I was probably in the winter mood as I adhered to the party enjoying the calming and warming sensation conveyed by the Angélus.
The difference between the release prices of the Château Angélus in 1998 and in 2009 was stunning. The 1998 came for €53 in the time of its release while the venerated 2009 sold for €210! The rising release prices of Bordeaux and their desirability have two consequences: One as Jasper Morris pointed out is that the traditional consumers of Bordeaux in Europe are looking into other wine regions where the prices have not risen so much yet. For that reason Bordeaux had to redefine itself as the producers have “to find new market every year”. Another one is that “there is no reward for a good behaviour in Bordeaux” as the proprietors try to come with the highest possible prices the market can still accept.
With our second course came two class ‘A’ St Emilions:
Château Ausone, 1er Grand Cru Cru Classé ‘A’
Château Cheval Blanc, 1er Grand Cru Cru Classé ‘A’
This time the vote was stronger on the Cheval Blanc side. I remember the first time I tasted this renowned wine, cannot recall the vintage but I would guess it was 1989 (as my scribbles on a piece of a random paper confirm, perhaps it was the first time I tasted it), and my surprise that this legendary wine can find such a wide fan’s base. I smelled it – my verdict was – a cabbage, yes it smells like a cabbage; then tasted it and swallowed with a clown-like facial expression – too tannic, where is the fruit? That was my first date with Cheval Blanc. Perhaps my palate has developed since then or I was lucky to taste better vintages, but now I cannot take my lips out of a glass filled with this magnificently complex wine.
The deliciously tender saddle of lamb with a spicy herb & mustard crust was the next course on our plates and with it the final three red chariots from Pomerol arrived. It was a battle indeed. The Pomerols tasted so differently. The tannins weren’t as green as in many of the St. Emillions at this stage. 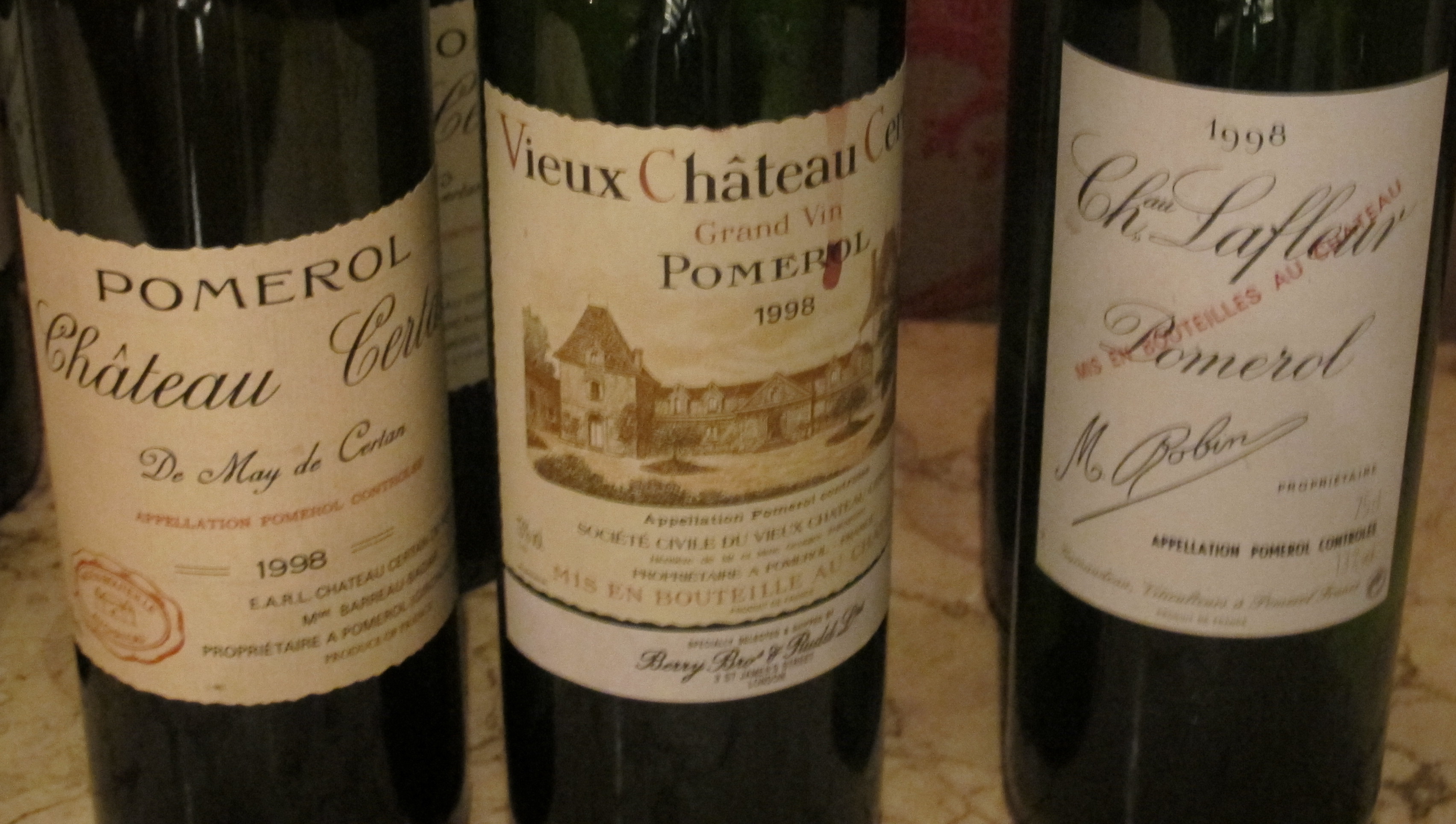 Château Certan de May
Vieux Château Certan
Château Lafleur
Perhaps the most famous is the Château Lafleur ( and the most expensive), nevertheless, for the present drinkers-turned-judges it wasn’t the winner of the fight. At least not for now, about 13 years after these wines were born. It was the complexity of the Vieux Château Certan, which enchanted the majority.
After all these intense reds we needed to appease our palates with something soothing, dense and sweet. A bottle of Château d’Yquem 2001 couldn’t please more. 100 points from Robert Parker might persuade many of the rare possition of this wine. Interestingly, it was a glamorous match with a warm pistachio cake with yoghurt cream & blood orange ice cream.
If you are not salivating yet and imagining those heavenly sins in the form of a marriage of the divinely prepared meals with the ‘Right’ wines, then a glass of an old cognac might do the job. That was a strong dot to an evening full of joy from a wine induced conversation and one that won’t be forgotten easily, at least for me.
Hopefully, I will have the privilege to attend one of the numerous dinners and tastings at Berrys in the future. The line is long though, as for the most popular themes you need to book at least three months in advance. That is my advice to you as well as don’t expect an old and stuffy wine dinner, but instead, an evening of a vigorous discourse, jokes and openness.
Oh, and, if you by any chance got a hold of a spare ticket or your company fell ill in the last minute, you can always let me know in the future. I’ll fly to London from wherever I’ll find myself at that moment.