Visit the Bodega Catena Zapata is a must for any wine lover coming to Mendoza. Its majestic edifice in a shape of a Mayan pyramid keeps mesmerizing thousands of visitors traveling there year after year. 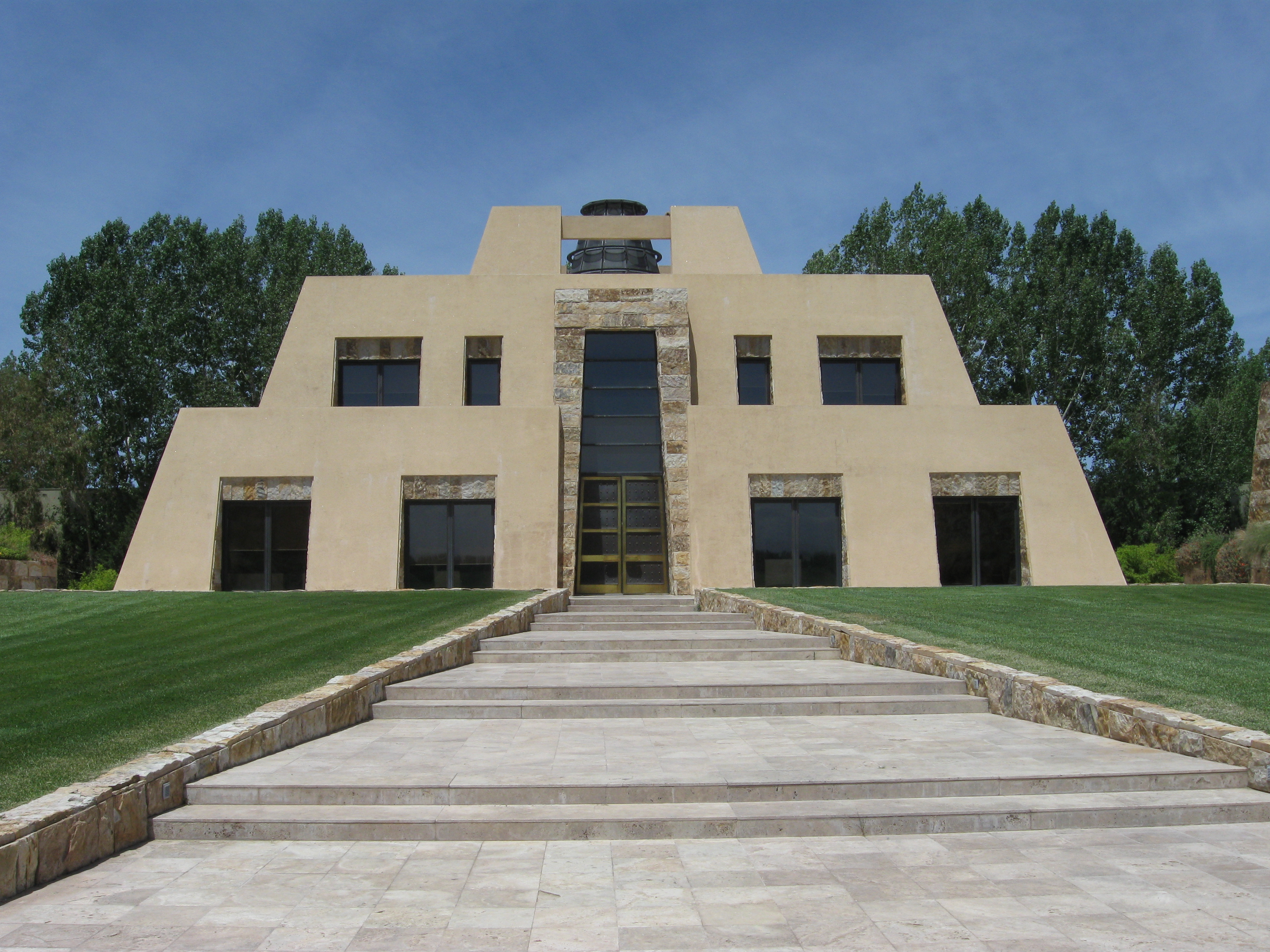 The inspiration for this were the Mayan pyramids in Mexico, where Nicolás Catena, the man who put Argentina on the world wine map, and his wife Elena went a couple of years ago. The building itself though is more an architectural wonder and it has nothing to do with a suggestion that the Mayans built wineries and more importantly that they have been drinking wine. About that I would inquire with the archeologists and historians. Laura Catena, the daughter of Nicolás Catena, wrote in her book Vino Argentino what her father wanted to achieve with building the new winery in such style quoting him saying: “The Mayans were the most advanced Indian culture in Americas. They wished to excel in science, art, and culture. Our goals were similar.”
So he decided to build the winery as a symbol of the common aims with the Mayans. 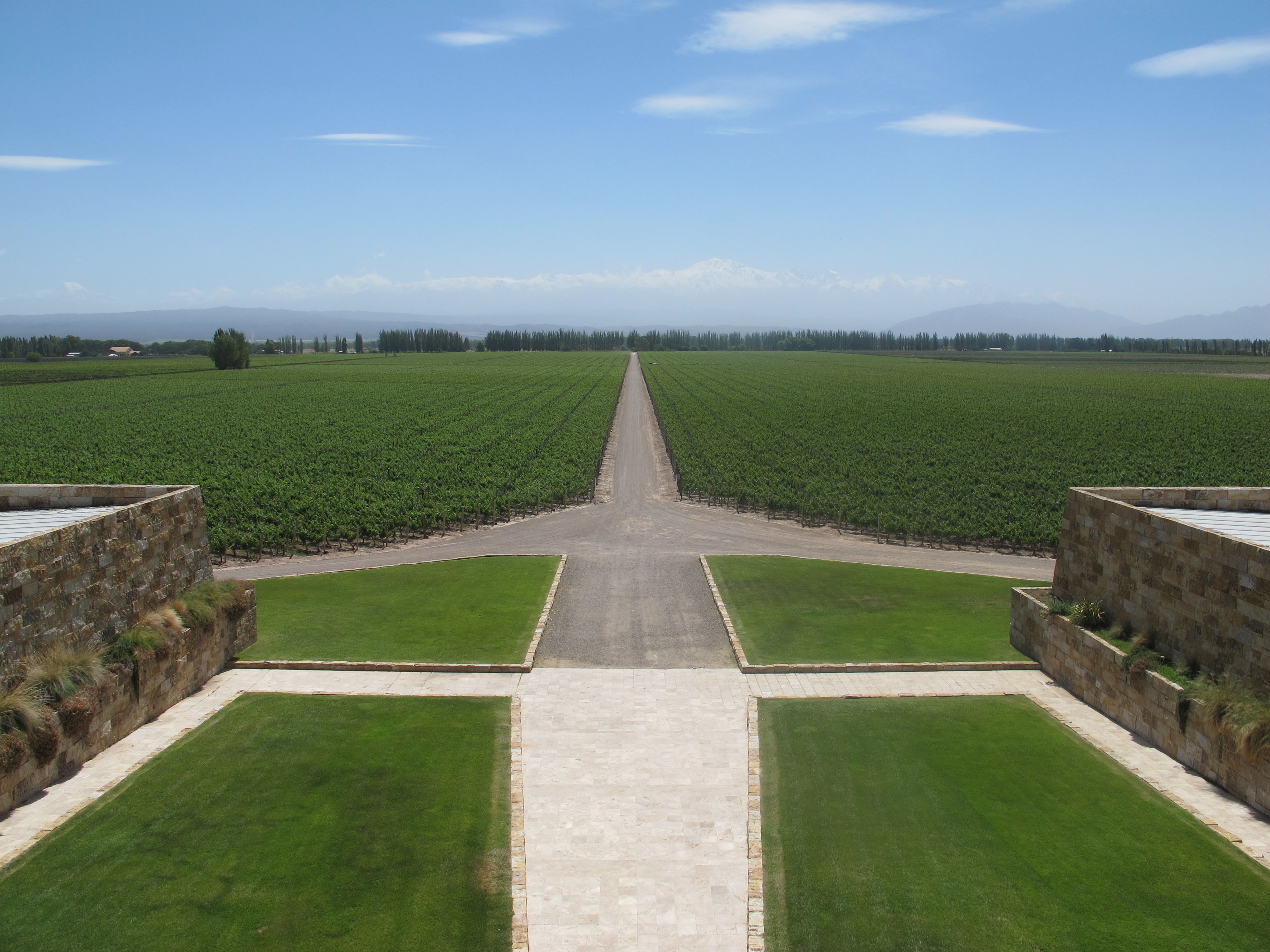 The entrance is impressive. Overlooking the vineyard one might feel like a pilot in an airplane just before landing on the runway. Then, turing to the winery and passing through a giant steel door, one finds oneself in the world of Catena’s dream. The reception hall has a wall lined up with rows of bottles from the extensive range of Catena Zapata’s wines.

Interestingly, about a half of these are only for the local market. Like in France and Italy, the Argentines drink mostly their wine and much less of the wines imported from elsewhere. The wines at Catena Zapata are labeled distinctly from the export items as the Argentines are more familiar with them. The wines are about the same as these allocated for the export. As I was assured at the winery “Argentina is not really the New World in terms of wine and people’s relationship with it. Wine was popular drink there for hundreds of years.” That compared to Napa’s last century boom or New Zealand two-decades-long encounter with wine makes Argentina more of a mature adult while the later countries are still babies in nappies.

Winemaking in the country before Nicolás Catena though was more about quantity rather than focusing on quality.
Argentina produces one of the highest volumes of wine on the world with 1,210,000 litres in 2009 it was the fifth country worldwide just after the US. On the other hand, this number used to be much higher. As many winemakers were inspired by Nicolás Catena’s striving for quality over quantity the volume has steadily declined. As recently as in 2006 it was 1,539,600 litres meaning that just in three years it was down by 21,41%.
Carefully researched land, experimenting with new, in Argentina not so common varietals and with single vineyard wines are one of the symptoms of such an effort. In the case of Catena Zapata it was the concerted work of one family and a team of winemakers headed by almost never-sleeping Alejandro Vigil, which brought the fruits of high quality world-class wines.

Here Mr. Catena’s influence on quality-driven wines is indisputable. And, you can taste it. Since the weather in Mendoza is quite stable year by year, vintages are not so important. Catena’s approach it to embrace the diversity of the vineyards. Therefore, often they blend wines from different altitudes as in the Catena Alta range. From 940m (3080ft) at La Pirámide Vineyard, Agrelo in Luján de Cuyo (around the winery) to 1500m (4921.26ft) at Adrianna Vineyard in Tupungato, Gualtallary District in Uco Valley, further down South from Luján. 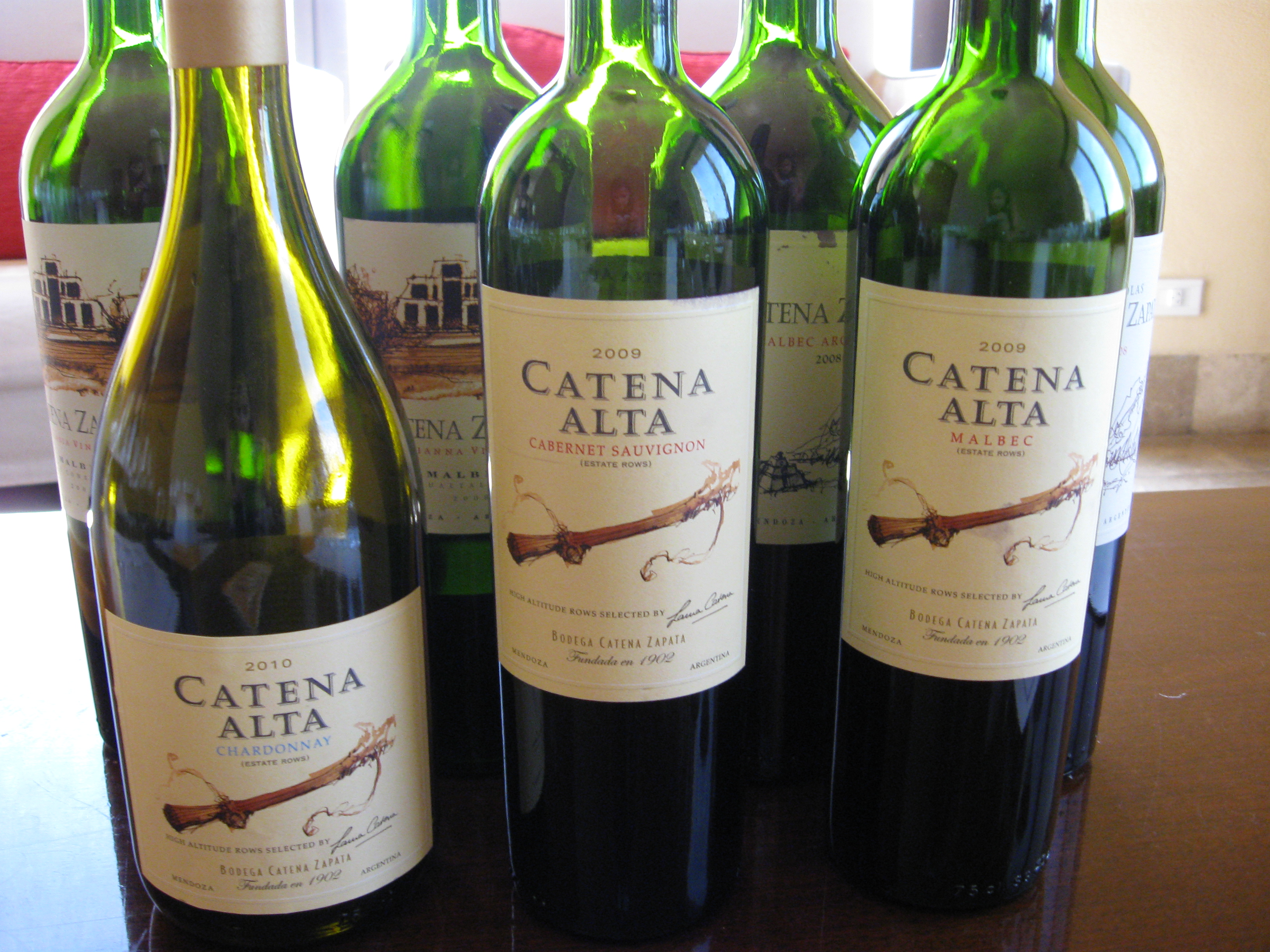 The Catena Alta Chardonnay 2010 is an expression of Tupungato. From two lots in various altitudes, aged in French oak barrels on lees and undergoing malolactic fermentation, the wine has lots of work done to it. On the other hand it will flatter the complexity-demanding palates. Fresh acidity from lemon moves into hints of cloves and vanilla from the oak and malolactic fermentation.
The Catena Alta Cabernet Sauvignon 2009 is a blend of three vineyards in various altitudes and districts. Again, the toasted wood on the nose discloses it was aged in mainly (70%) new French oak for 18months. The acidity is again the strength of the wine with typical dark fruits notes one wants from a good Cab.
The Catena Alta Malbec 2009 is the utmost expression of the various terroirs in Mendoza. Its blend comes from Maipú, Luján de Cuyo, San Carlos and Gualtallary in the Uco Valley. Such an extensive selection resulted in a wine representative of Malbec from Mendoza in its most characteristic fashion. Hints of marmelade and fruits on the nose introduce the fruit-rich palate rounded well with the oak.
My favorite from all wines we have tasted was Nicolás Catena Zapata 2008 blend of carefully selected Cabernet Sauvignon and Malbec from various family vineyards. Aged for 24 months in 100% new french oak its complex tones were composed into a symphony of red and dark fruits with layers of fresh black currant and caraway seeds on the nose. The high acidity balanced the influence of the oak so the wine remained refreshing.
Argentina vs. Europe
A systematic and open-minded approach not enslaved by laws and rules as in Europe has been driving Argentina’s growth at least in one direction – production of quality and diverse wine. And that has been recognized abroad from the leading export markets in the United States, Canada and neighboring Brasil. In the later, currently the Argentine wine is marking a surge of interest as the Brasil’s economy grows.
The family ownership is what makes Catena Zapata different from increasingly ‘corporationised’ European wineries, often bought by large luxury goods and insurance companies and thus disconnected from the families’ hands. Overall, the scale of Latin American wineries though corresponds with the size of land suitable for growing vines in these countries. Most of them are enormous when compared with the more boutique European vineyards and wineries. But, producing great wine is not about the size. Today, with the state of the art technology, making a quality wine is about the expertise and having the right people on board.