As you drive from Tucuman to Cafayate the lush green fertile hills with flora resembling my native Central Europe turn into an almost life-less dessert with the rising altitude. The land gets drier, rocky and all you can see are giant cacti some more than 200 years old. Colorful rocks with hues if red, brown and grey add a bit of artsy atmosphere into an otherwise plain surface. 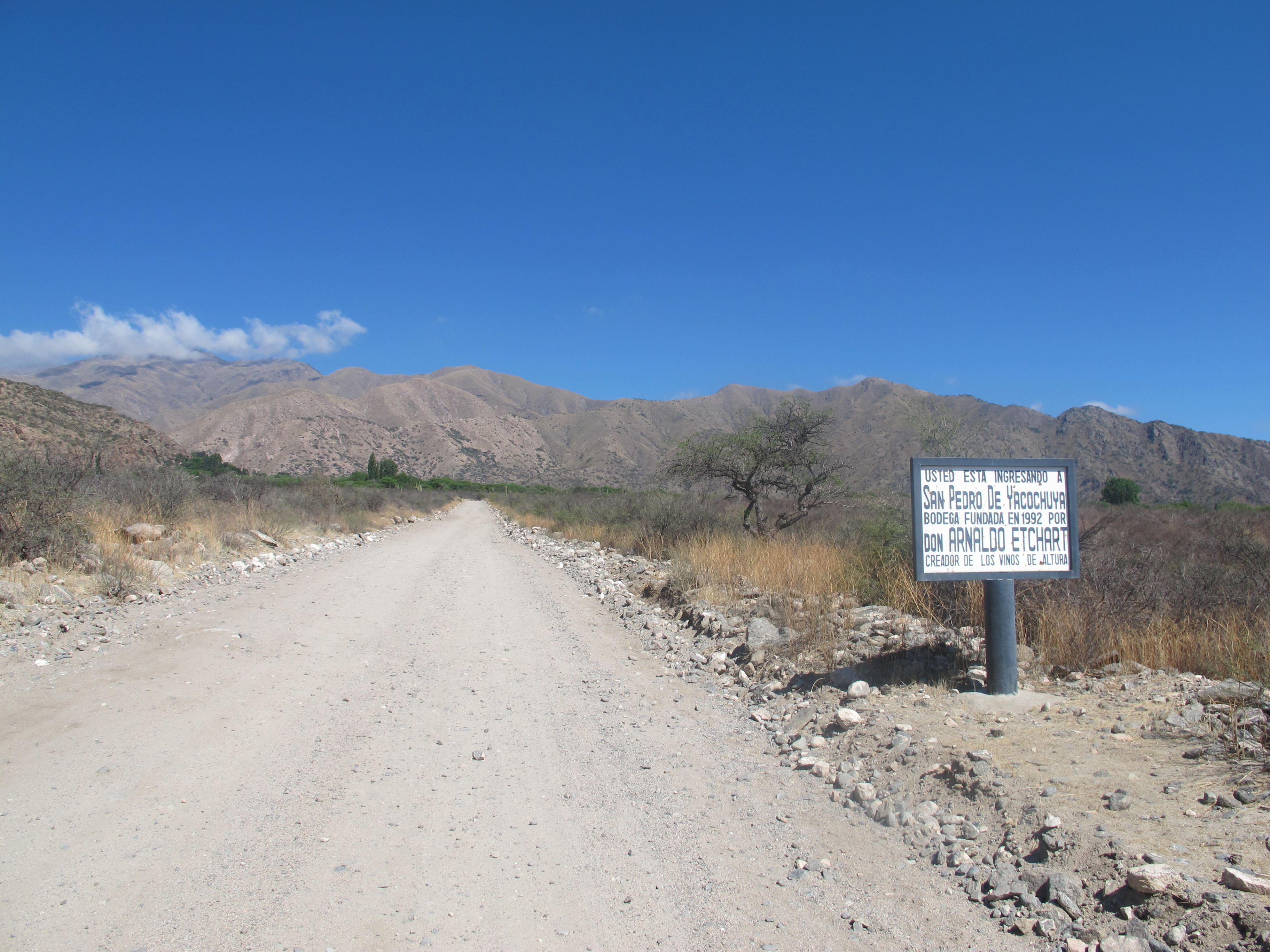 From hill to hill you can spot some wild horses, cows, goats and sheep feeding themselves with everything green they can spot on the occasional pastures. They look so piecefull, harmless and content that one wishes to join them in their worry-free lives. 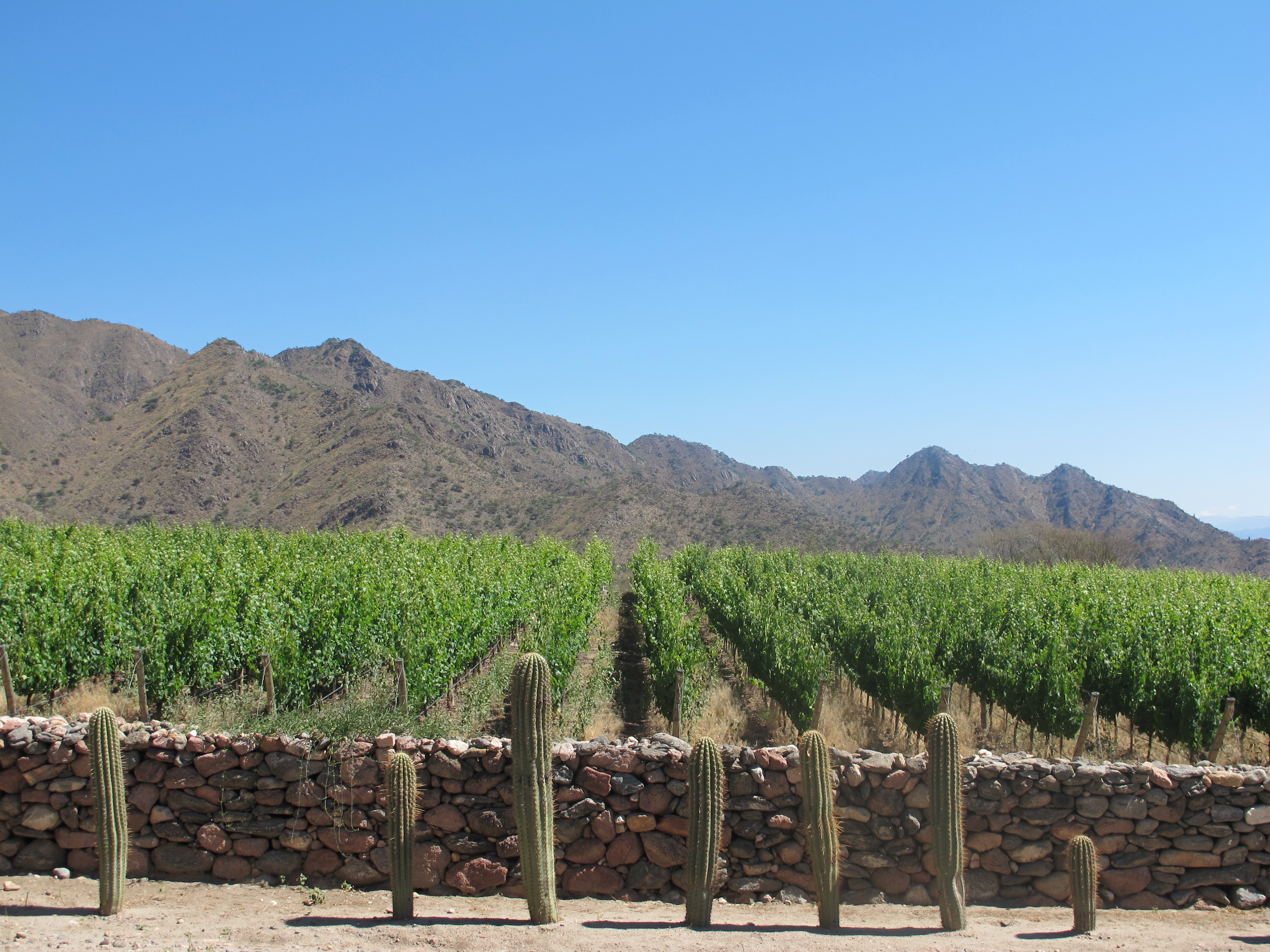 In this setting one would rarely expect seing vines, what more the vines giving lush and complex wines. Yet, the reality is different than it might seem. If Michel Rolland, the world’s most famous oenologist and consultant, trusted such climate and took on the challenge to assist on creating spectacular wine here, then something must be right.

Potential of the land

More than right, indeed. It is the altitude and big temperature difference between the cool nights and hot days that make growing of top-quality vines around Cafayate possible.
Most of the best winemakers in the region believe in Cabernet Sauvignon and think of Malbec as more suitable for Mendoza. Not Michel Rolland and his old friend and Alvaro Etchart, the primary owner of the estate Yacochuya. The old Malbec is the key to success to his intriguing and concentrated wines. The main winemaker at the winery today  is Alvaro Etchart’s son Marcos, while Michel Rolland remains consulting for the estate. 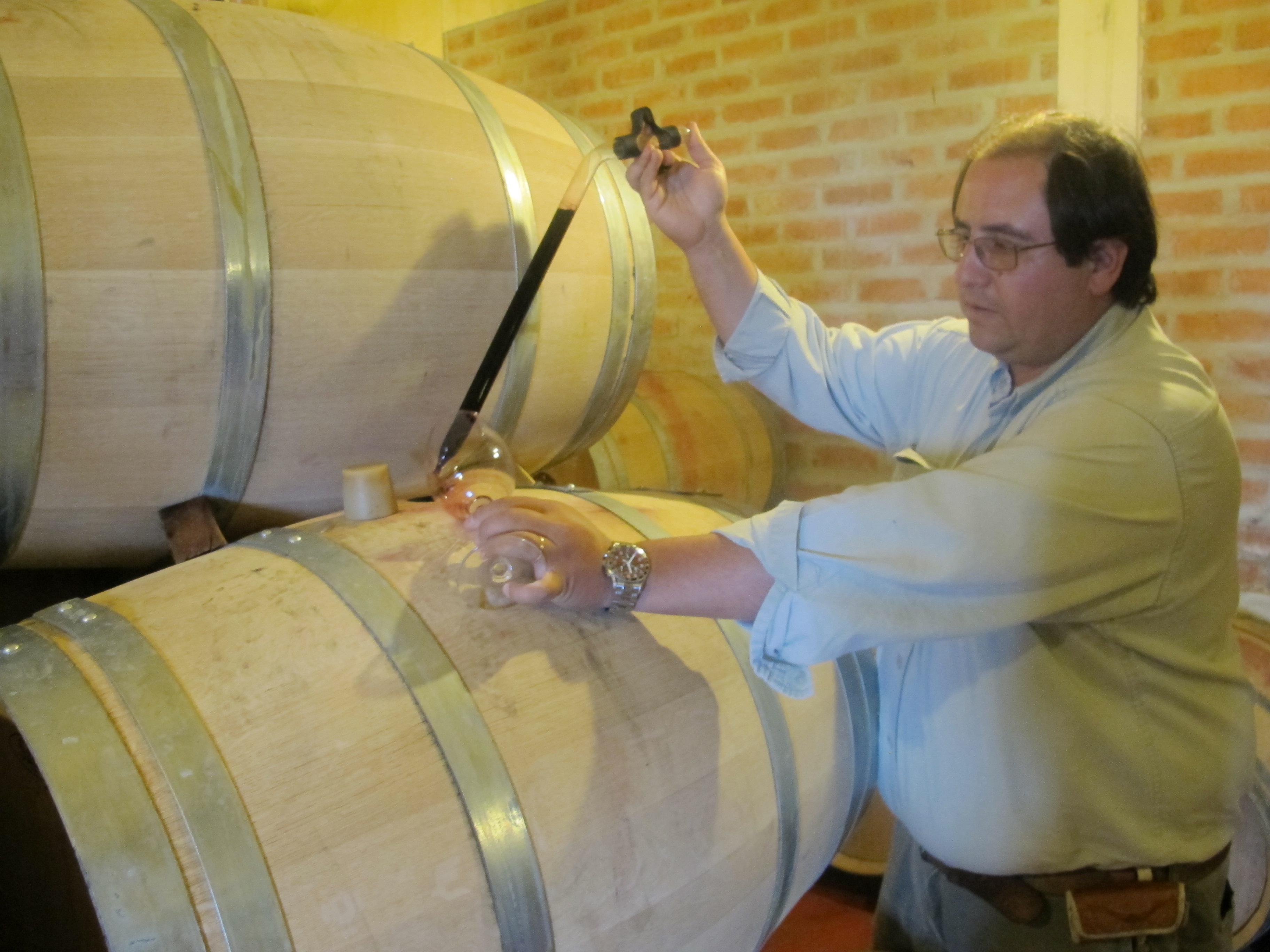 Strenuous journey to the winery

Getting to San Pedro de Yacochuya becomes an unforgettable trip if you cycle or walk there, even for cars it is quite a bumpy ride. Once you leave the main road, pass through an alley of trees pampering you with shade, you get to even a dustier and more rocky road. Going slowly higher up, the pungent rays of the sun during summer days require increasing willpower to continue on the seemingly short journey to San Pedro de Yacochuya off the main well-tended road.
The winery is located only five kilometres from the main road, but the gradually worsening conditions as you accent towards the winery (2035m above the sea level) make the trip challenging. Beware of the dust, especially when a car passes by  as it stirs the suffocating mass of dust and may cause a difficulty in breathing. When it happened to my sister I thought she might die on the spot. She could not breath, we had no water to clean her sinuses and mouth so the only solution was to stop and wait until her breathing got back to normal.
Passing a school we thought: “hurrah we are there”, but, to our slight disappointment and surprise at the same time, we had to continue further. Who would think of a school here? Quite far from the town. Nevertheless, later we have learned that it is quite usual in the area.

The house and winery in one

Arrival to the Yacochuya winery was an ultimate reward for our physical as well as psychological effort. Stunning views from a tranquil patio by the winery’s visitors entrance calmed down our pumping hearts and exhausted minds. Marcos Etchart, the winemaker welcomed us and took straight to the premisses where tanks filled with this year’s wine were awaiting us to sooth our thirst and fill our minds with joy. After a short explanation about the family winery, it’s history, relationship of his father Alvaro Etchart with the legendary French oenolog Michel Rolland, and the techniques employed in wine growing and wine making as a result of his consultancy, we moved to tasting. 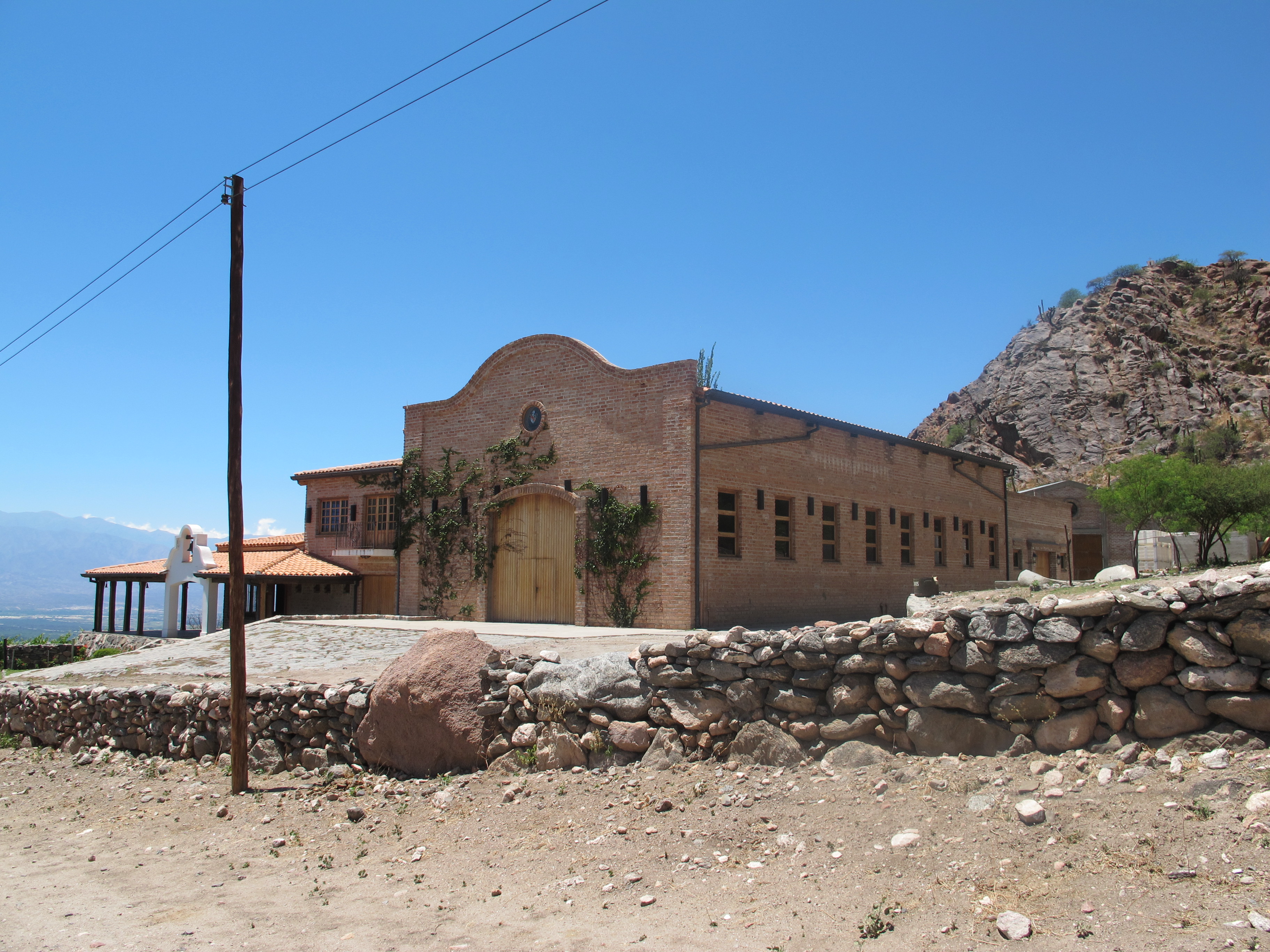 We tasted various wines from the tanks and later the barrels. Yacochuya produces a small quantity of aromatic Torrontes, in 2011 also a deeply coloured rosé from Malbec, unoaked and oaked Malbec, Cabernet Sauvignon and in some years also a locally popular Tannat. Using French oak is the rule of thumb, the length of ageing and also the age of the barrels varies according to the quality level of the resulting wine. The highest range of wine is aged for 18-24 months in the new French barrels.
All the wines are extremely concentrated, with soft tannins and enormous depth. The most interesting for me and my sister (a sommelier) was the spicy Cabernet Sauvignon. Red pepper and dark berries on the nose with hints of leather from the wood and big, concentrated yet balanced with approachable soft tannins. It is like a birthday cake for adults. Dark berries add the sweet feel, the alcohol (above 15%), the festive atmosphere. 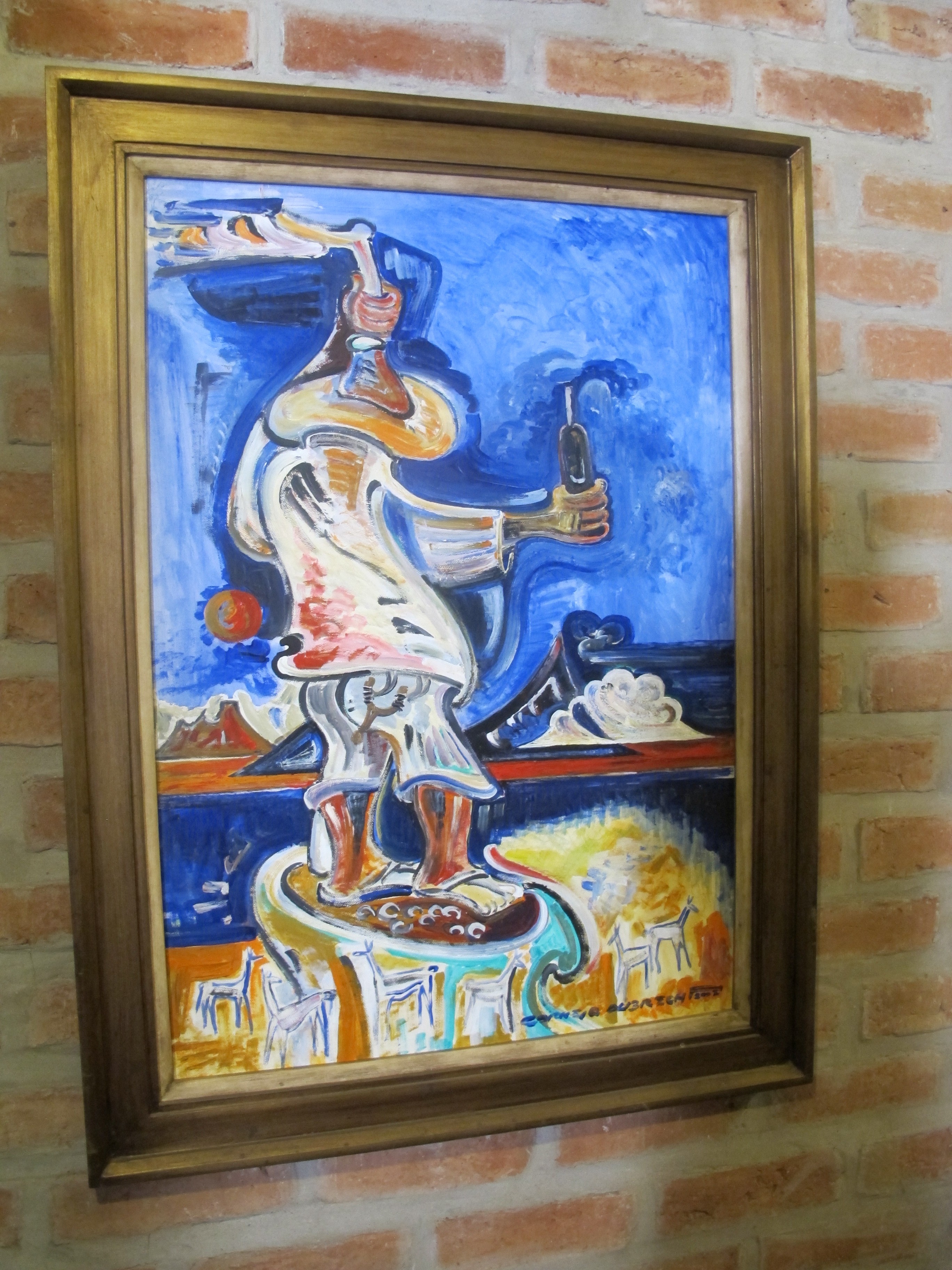 During our visit, Don Alvaro Etchart was not around, which was a bit shame since his love of poetry and connections in the local wine trade are profound. The family house is just above the winery and it’s perhaps the view or the waterfall on the property that inspires him to seek the beauty of life in poetry. Surely, meeting him and tasting the tremendous wines at the San Pedro de Yacochuya winery near Cafayate is a good reason for my return to the region.
I missed the poetry, but not the art hanging all over the tasting room. This particular one was for my personal appetite for art the most appealing.